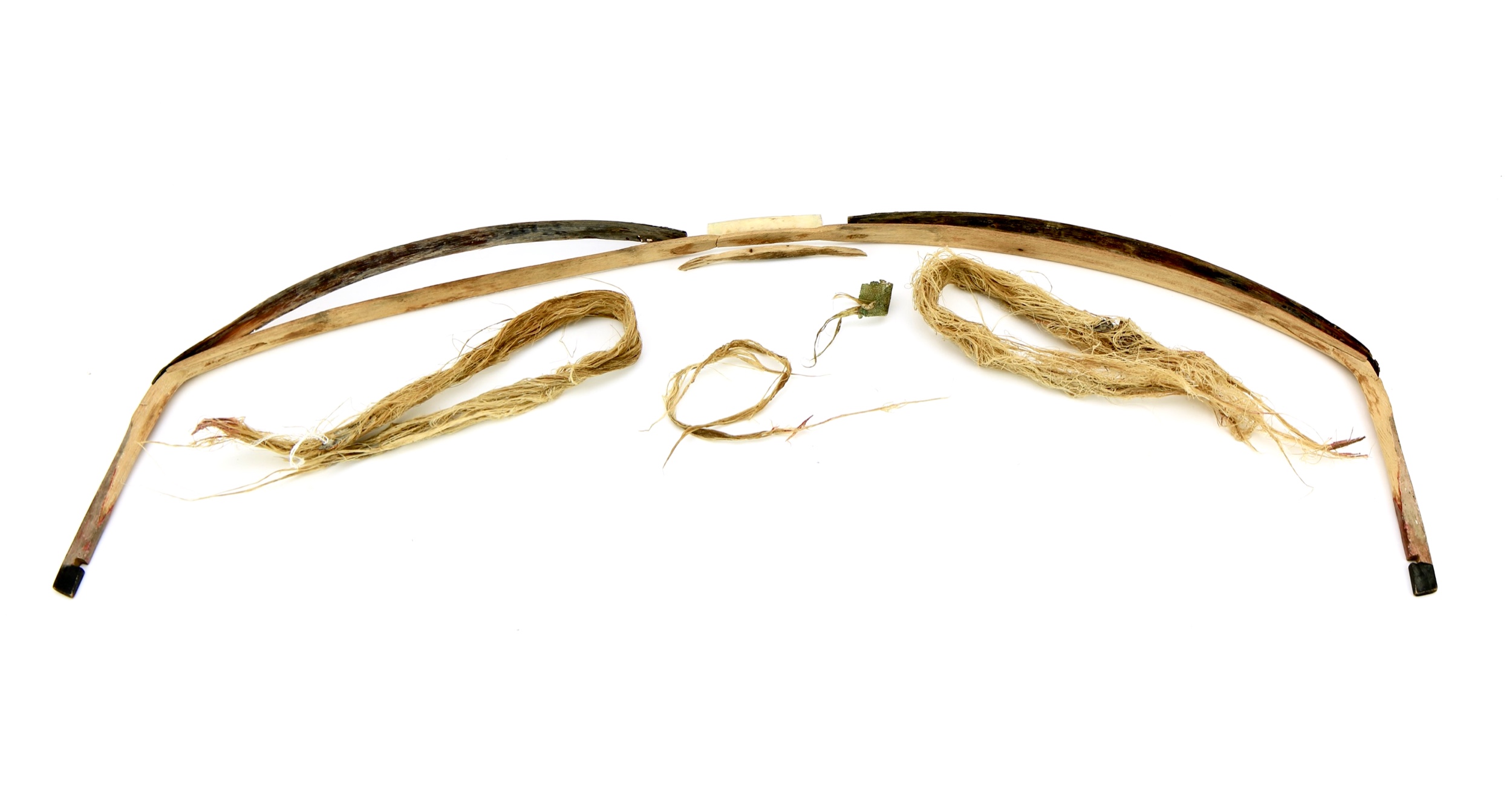 I purchased this bow in a very bad state. It had been in a wet basement for over a decade. It had lost most of its bark surface covering, and parts had started to delaminate. Because as a type it was not incredibly rare, I decided to soak it in water to take it apart so we could learn about how these bows were made.

It didn't come apart easily, attesting for the strength of the bonds achieved with these traditional glues. I had to soak it for many days, peeling layer after layer of the sinew.

Here we have the parts that once made a Qing dynasty bow. It is of a somewhat shorter type than normally encountered and may have either been for a juvenile archer or perhaps a shorter sports bow. I estimate its draw weight was probably somewhere around 50 pounds.

Core & ears
The bow consists of a long bamboo core running through the grip section, which is of a lenticular cross-section. On either side is a V-splice that accepts the tenon of an ear that consists of a single piece of wood. The maker's solved the weakness of the wood grain in the bend by having the sinew run up to over 2/3rds of the ear. The whole was painted over so it was not visible in the finished bow.

A more well-known method to make these bows is to make each ear out of two pieces, with separate knee pieces called nǎo (腦) or "brain".1
It is notable that while the sides of the V-splices are a perfect match to the ears, the deepest part of the V is left open and was filled with glue and some sawdust. The nock sections on the ears were painted black with no reinforcements at the nock, and only a small insert was made at the very top.

Grip
The back of the grip (facing away from the archer) was built up with a piece of wood, over which the sinew was laid out. The sinew consists of very long strands, overlapping at the handle. Three layers were done.

At the belly side of the grip (facing the archer) was a bone plate to take the compression from the two horn slabs.

Horn
The horn goes from relatively thick to incredibly thin near the tips, becoming translucent, to save precious weight in these areas. Both horn and bow core were very coarsely scored to take the glue, yet the bond was very good. Even after many days of soaking, some of the glue that held the horn is still on the core.

It is notable that the handle was wrapped with sinew before the bone plate and horn slabs were installed. They probably did the first sinew job without the horn to curl in the limbs a little bit to make it a better fit to the horn. Subsequent sinew layers were probably done after the horn was applied, as was the norm.

Notice how the horn was left its natural shape, not flattened. The inside of the horn was also still concave in cross-section, matching the convex core.

Decoration
Very little of the bow's original surface covering survives but a patch of ray-skin from just above the grip shows it was once beautifully decorated with inlays of bats in emerald green ray-skin.

Presented here is a deconstructed Qing bow that provides fascinating insights into bow making techniques that applied in the Qing. The bow's construction diverges from the norm in several ways, such as the absence of separate knee-pieces and the fact that the first layer of sinew appears to have been done before the horn.

It reminds us that no matter how familiar we are with old texts and period accounts, actual objects can still tell us something new.

Notes
1. See Tan Danjiong (T'an Tan-Chiung); Investigative Report on Bow and Arrow Manufacture in Chengdu. Published in Academia Sinica Language and History Review, Taipei, 1951, and then again by the Society of Archer-Antiquaries in 1984. 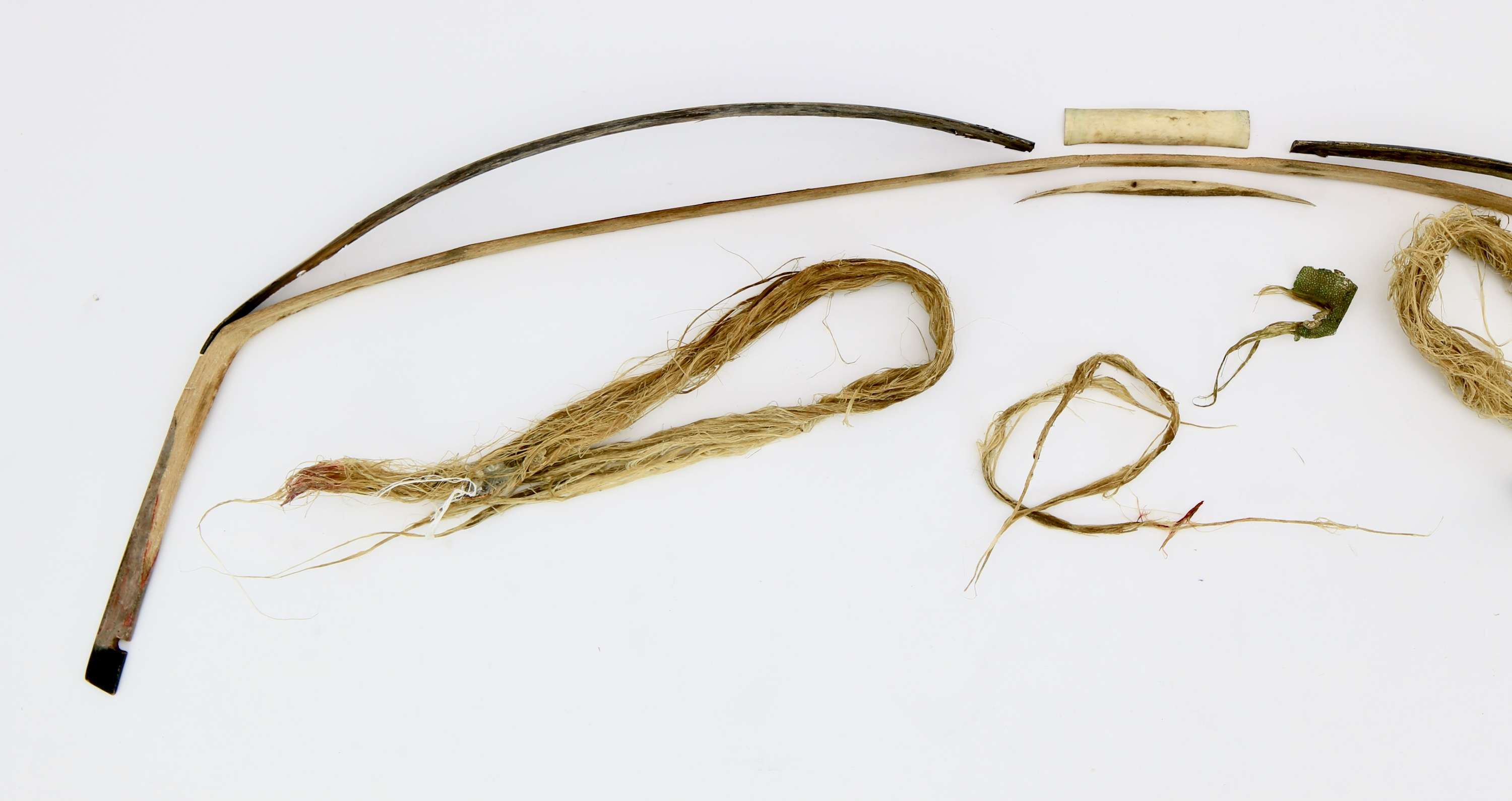 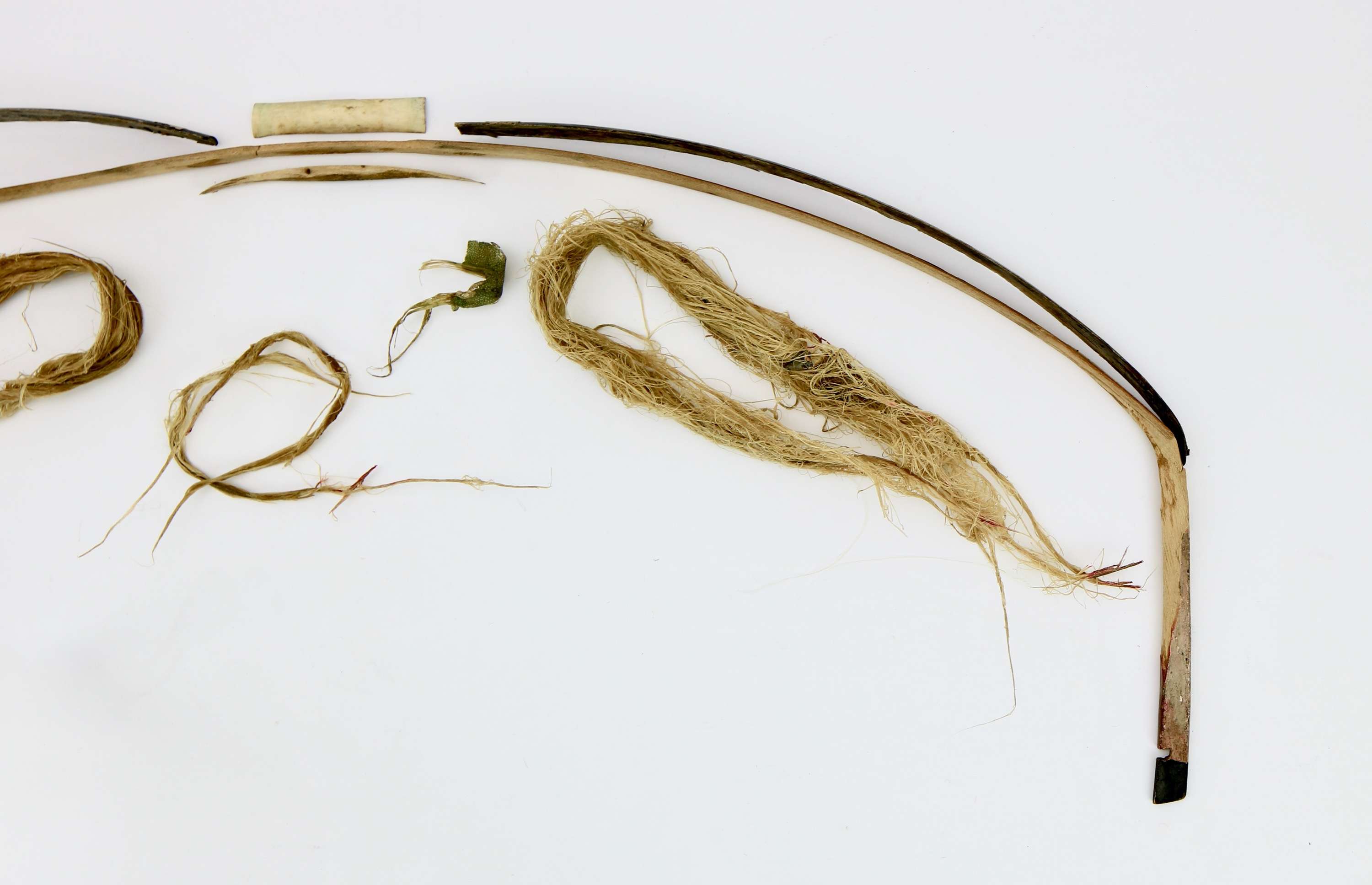 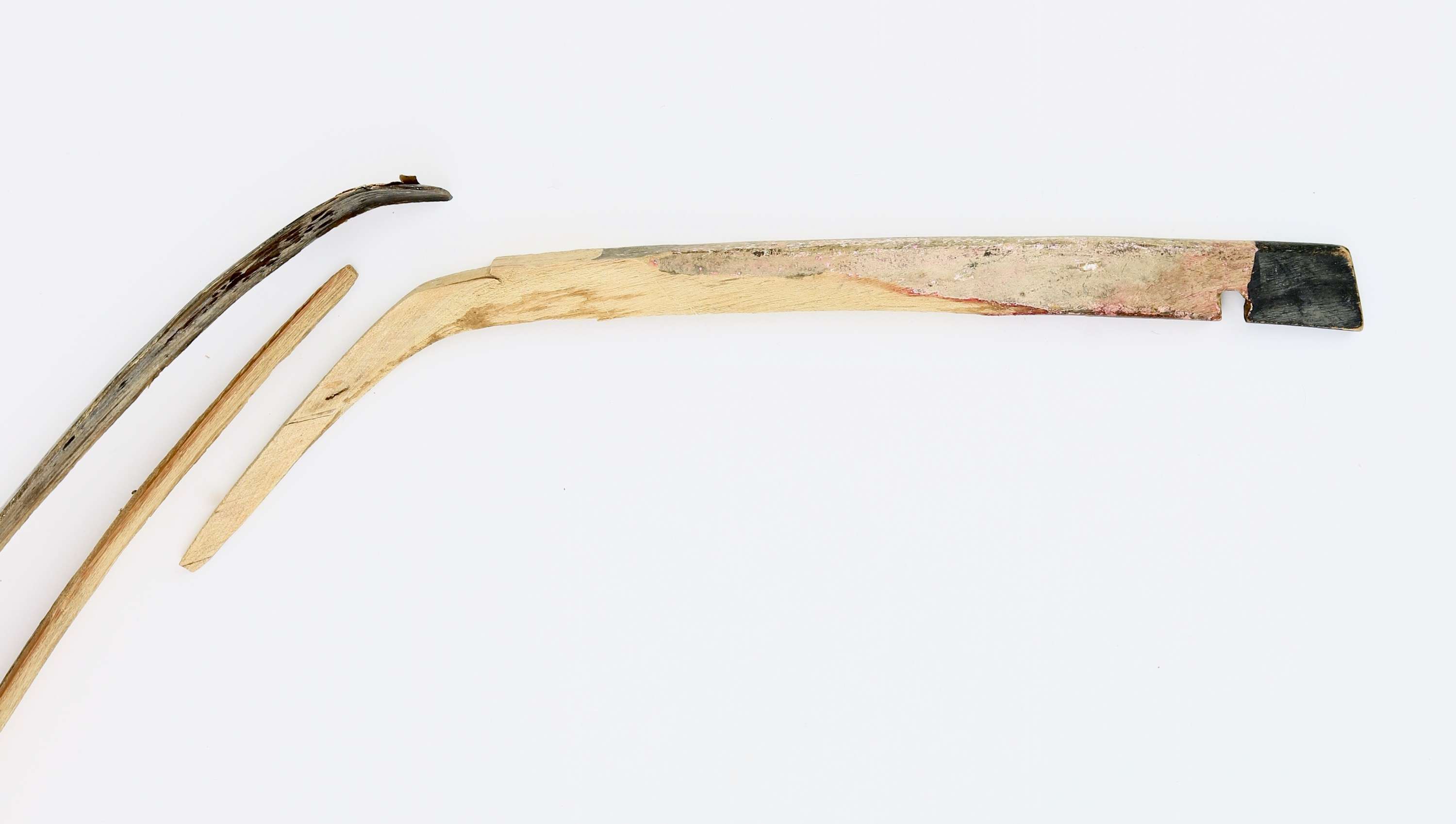 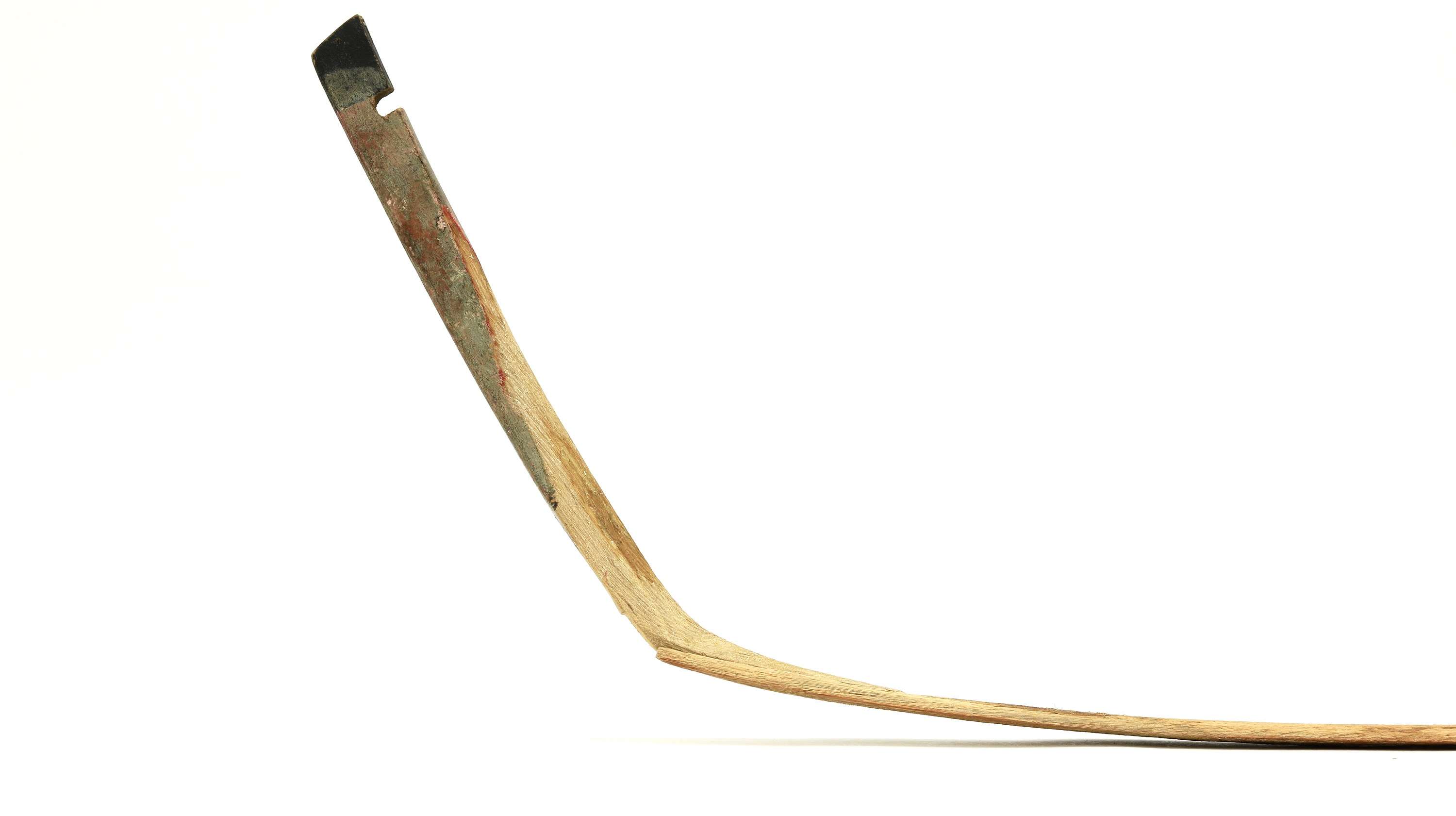 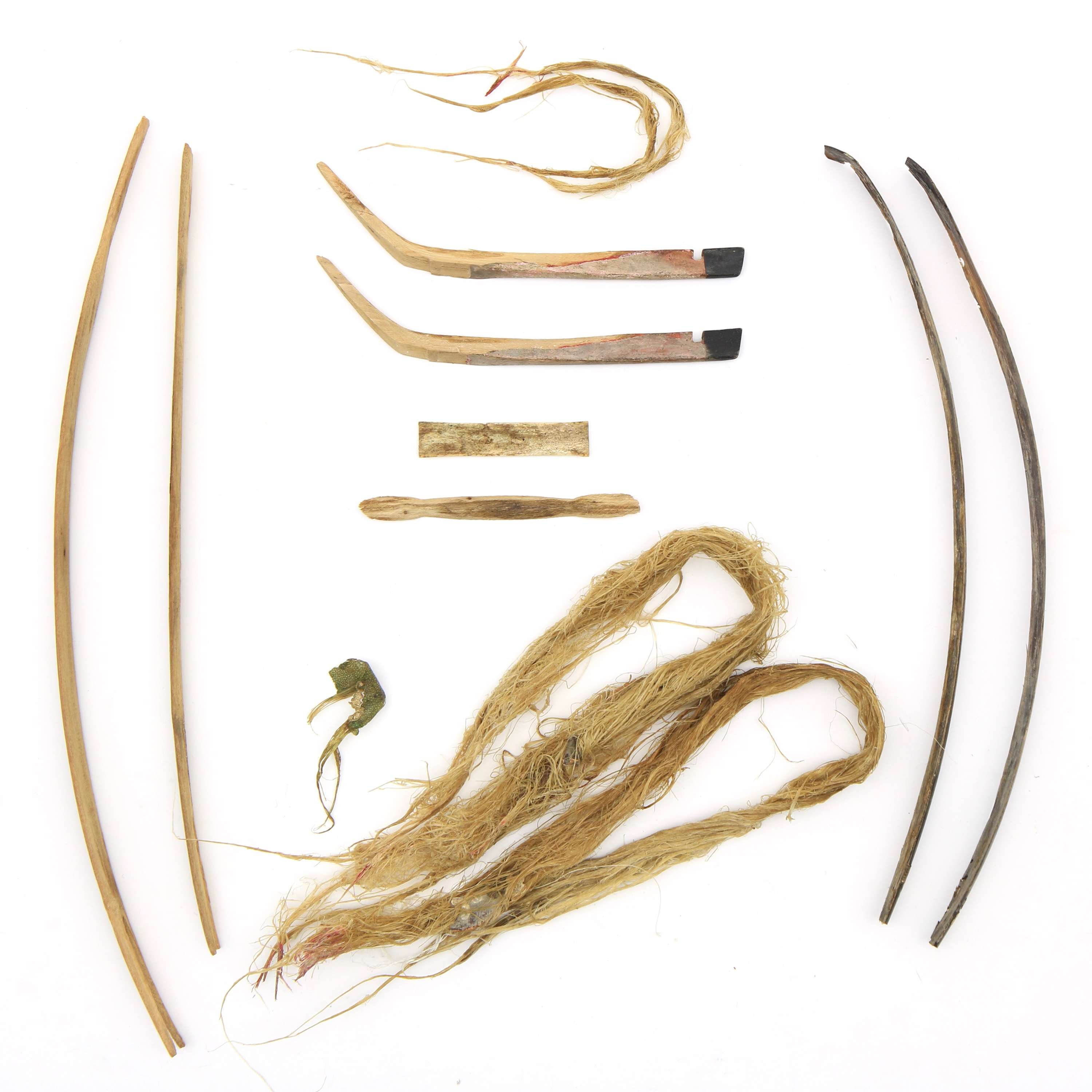