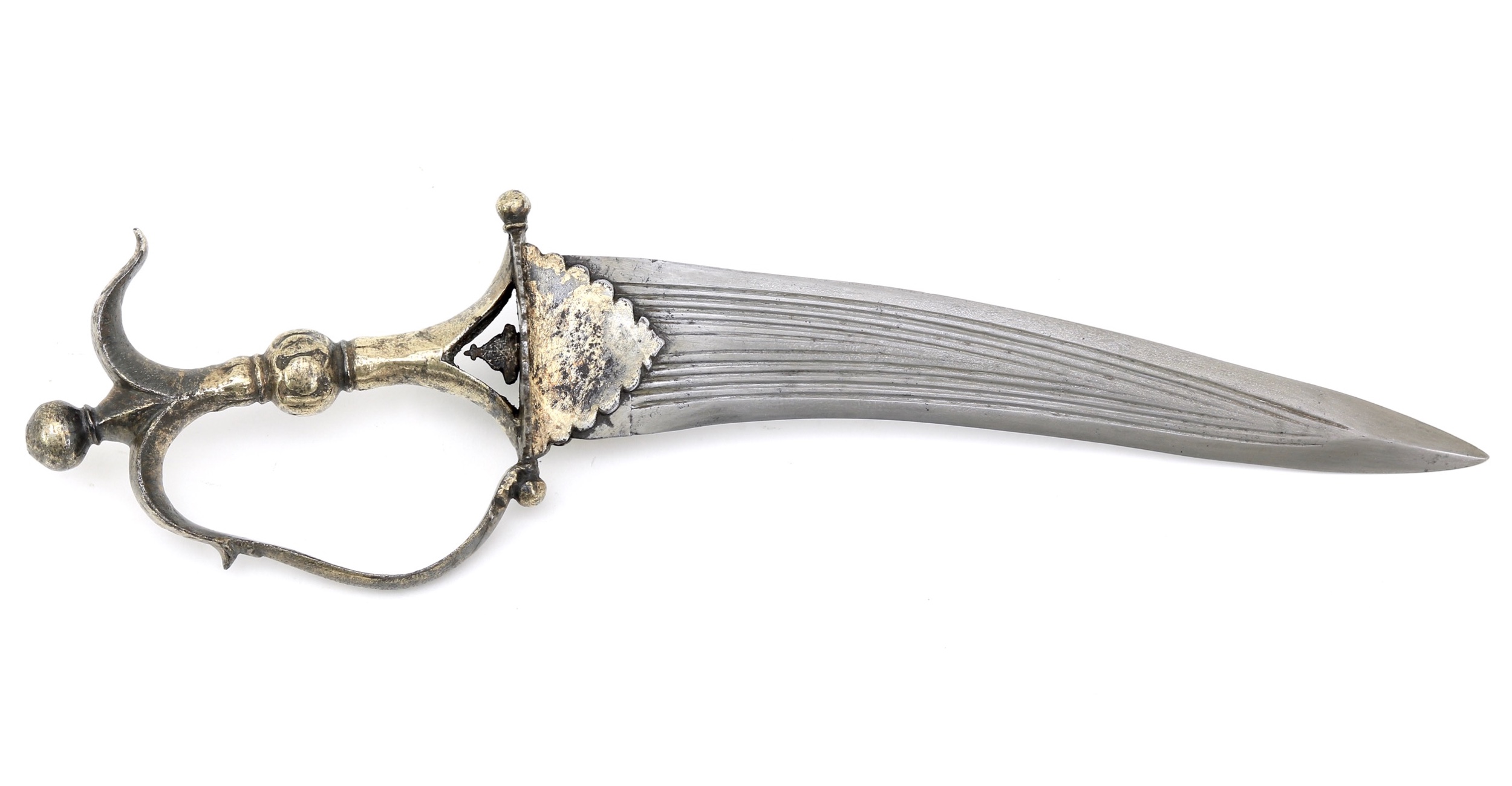 From a German private collector

The chilanum is a graceful type of Indian dagger with a distinctive sculptural hilt. Its peak of popularity seems to have been in the 16th and 17th centuries, but production continued into the 19th century.

The design may look like aesthetics went before functionality but in fact, the opposite is true. The all-steel hilt hugs the hand reducing the chance of it to drop or slip, while the typical, all-steel construction makes for a sturdy and very durable design. Furthermore, the hilt design increases the leverage the hand has on the blade.

A textbook example of an early chilanum. It has a wide, curved, multi-fullered blade made of fine-grained wootz steel. It has a mild reinforcing swelling near the tip.

The blade is held between two triangular langets with scalloped borders. It is held by means of with three rivets, construction that is also prevalent on most southern Indian katar. Above the langets is an oval disc guard, also scalloped, with a bud-shaped finial on either side.

The stem-like grip splits on either side, with its base on the guard standing over a stylized lotus bud-shaped ornament like a gable roof. In the center, there is a ball worked in relief with stylized leaves. The split at the pommel gives the chilanum its characteristic shape. There is a sturdy knuckle bow on one side of the hilt, running from disc guard to one side of the split pommel. At the very top is another bud-shaped ornament.

The hilt is entirely overlaid in silver, which was subsequently fire-gilt. Most of the silver and gilding is still present.

The piece comes with an old scabbard, a late replacement.

I have yet to establish a film timeline of the development of the chilanum, but it is a subject that interests me greatly. One thing that is notable is that the weapon already reached its mature form by the second half of the 16th century, and is commonly depicted on art both from northern and southern India at the time. 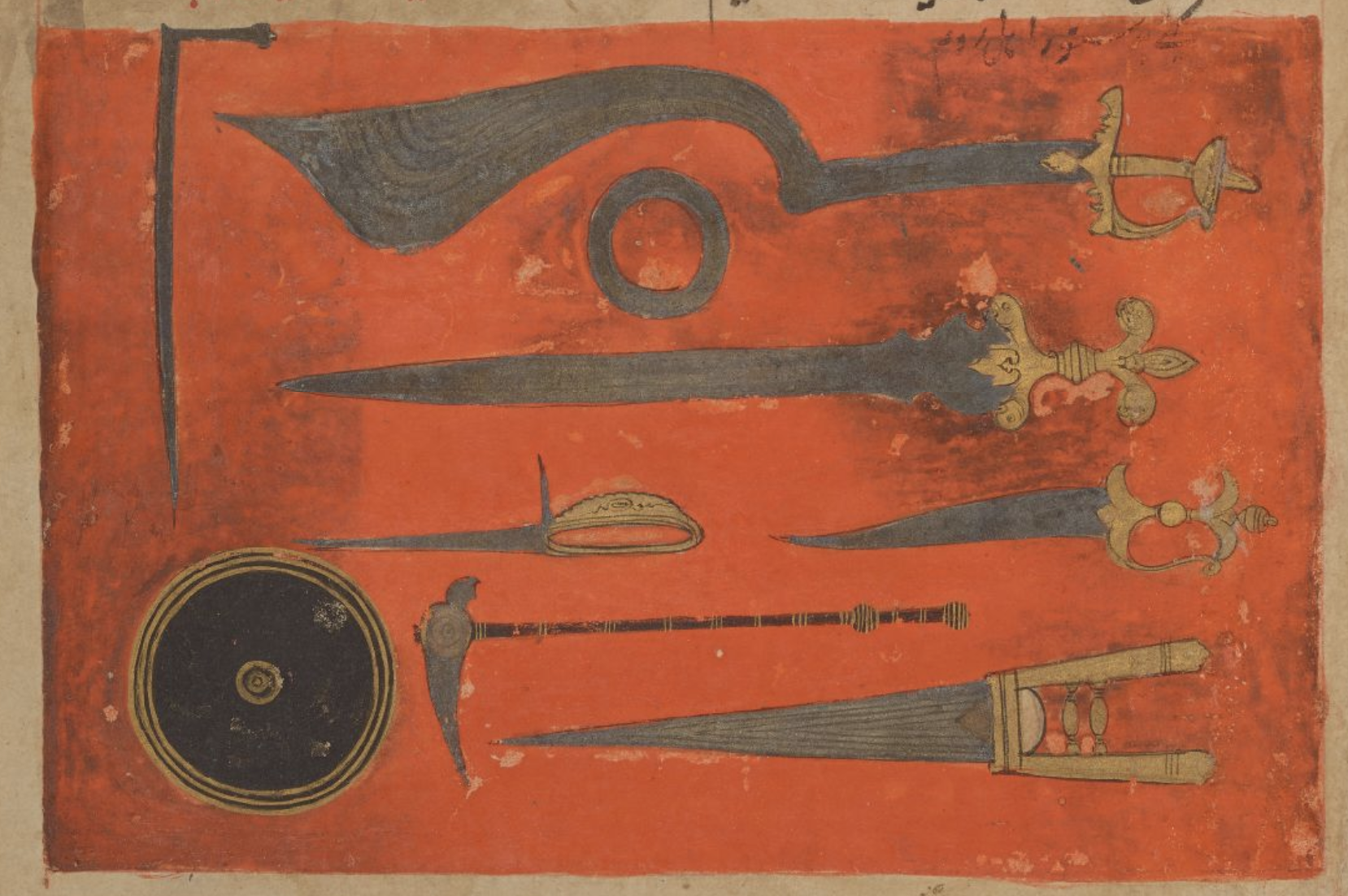 A notable old pictorial source is a page from the Nujum al-'ulum of Bijapur, circa 1570. It shows us not only a fully mature chilanum with knucklebow and recurved blade, but also a katar with a ribbed blade and a style of langets that is stylistically very similar to the blade and langets of our chilanum here.1

A painting of the 1680s titled The House of Bijapur showing the earlier rulers of Bijapur to the left, one, probably Ismail Adil Sanjog (ruled 1510-1534) is seen with a chilanum. The later rulers on the right all wear a katar.2

With this in mind, Deccan, late 16th to early 17th century seems plausible.

Blade in good condition, free of pitting. Some slight fading to some of the grooves. Hilt in good shape, retaining most of its original surface finish, now tarnished with a deep patina. Hilt fits tightly to blade.

Scabbard velvet and leather are damaged. Leather is peeling. 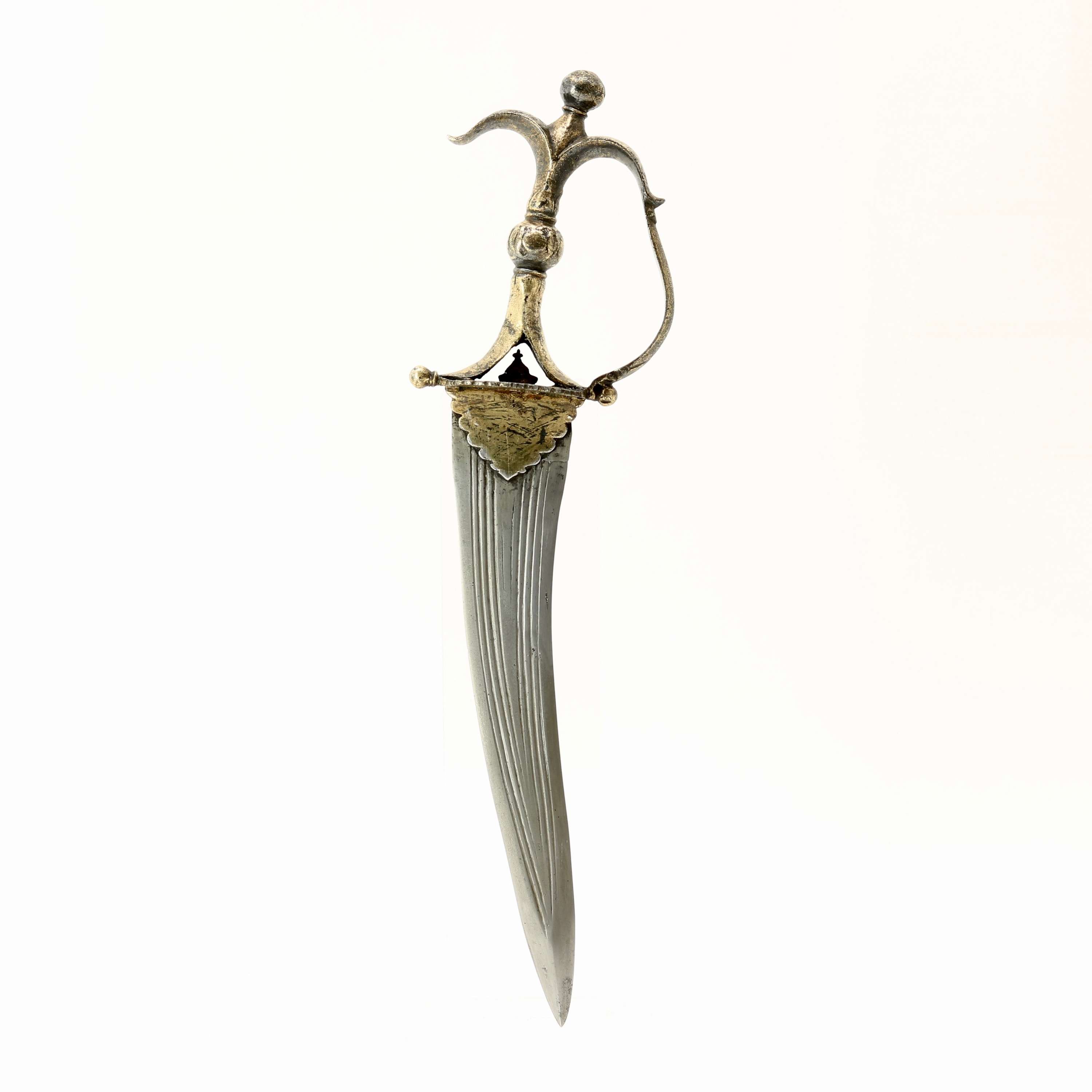 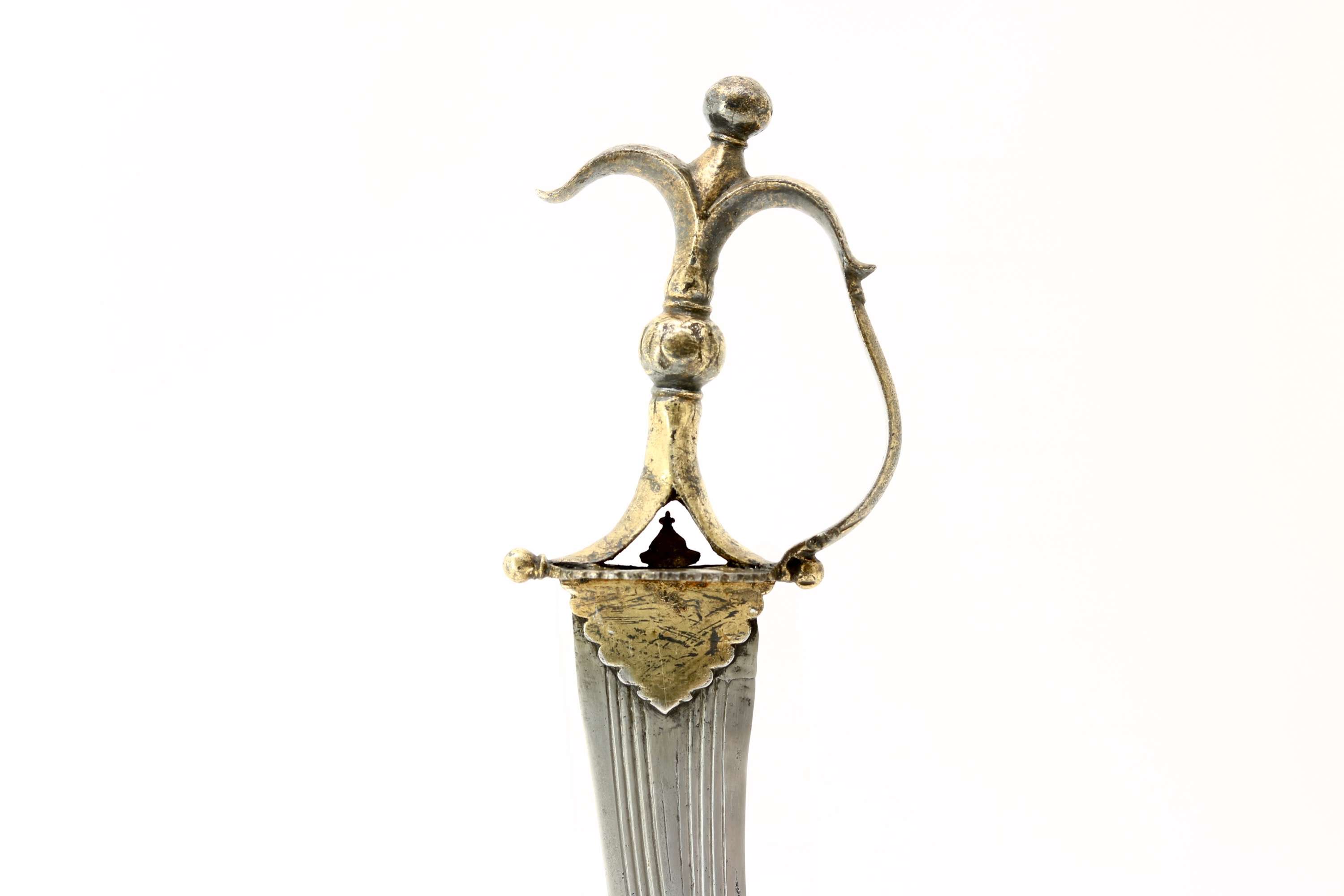 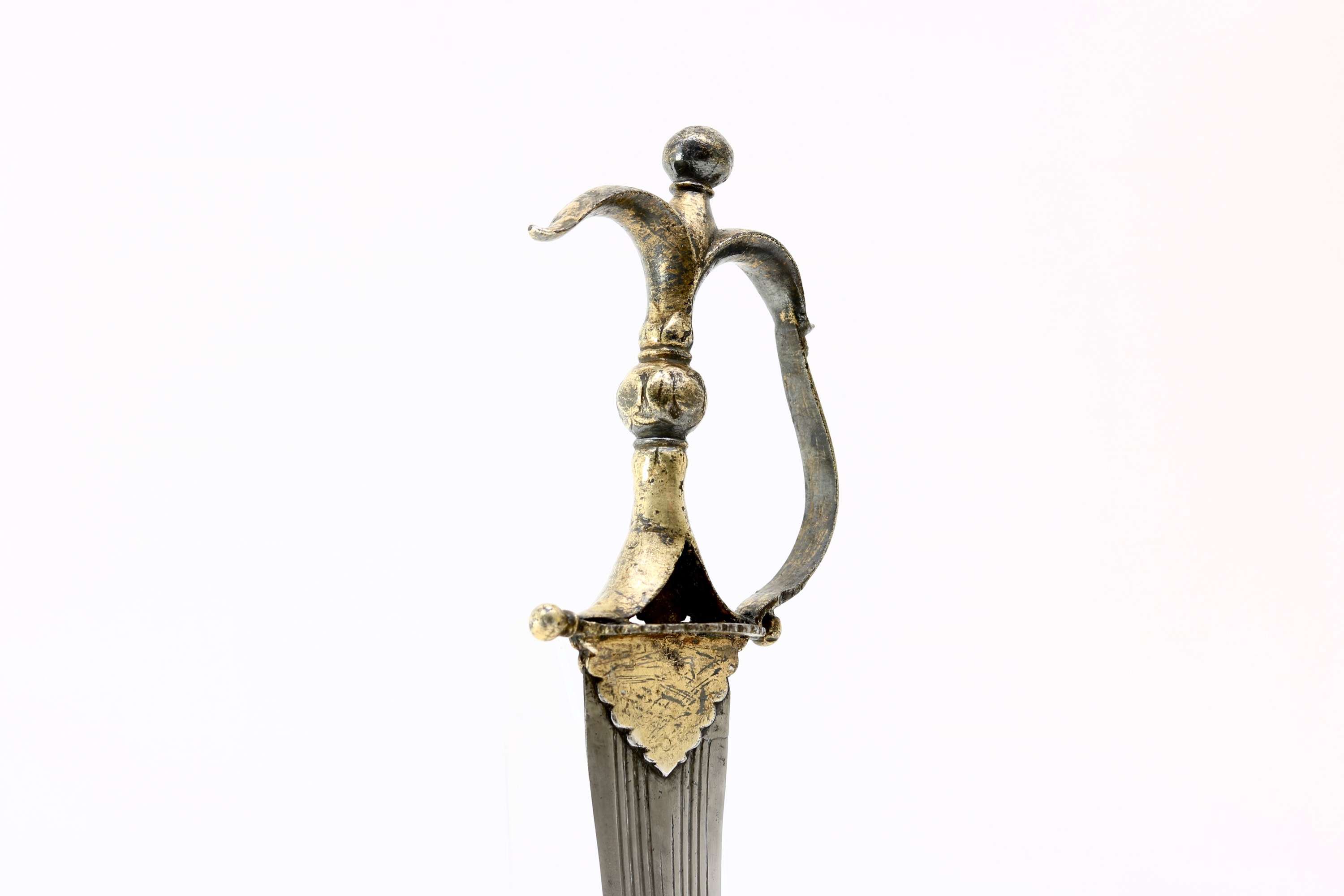 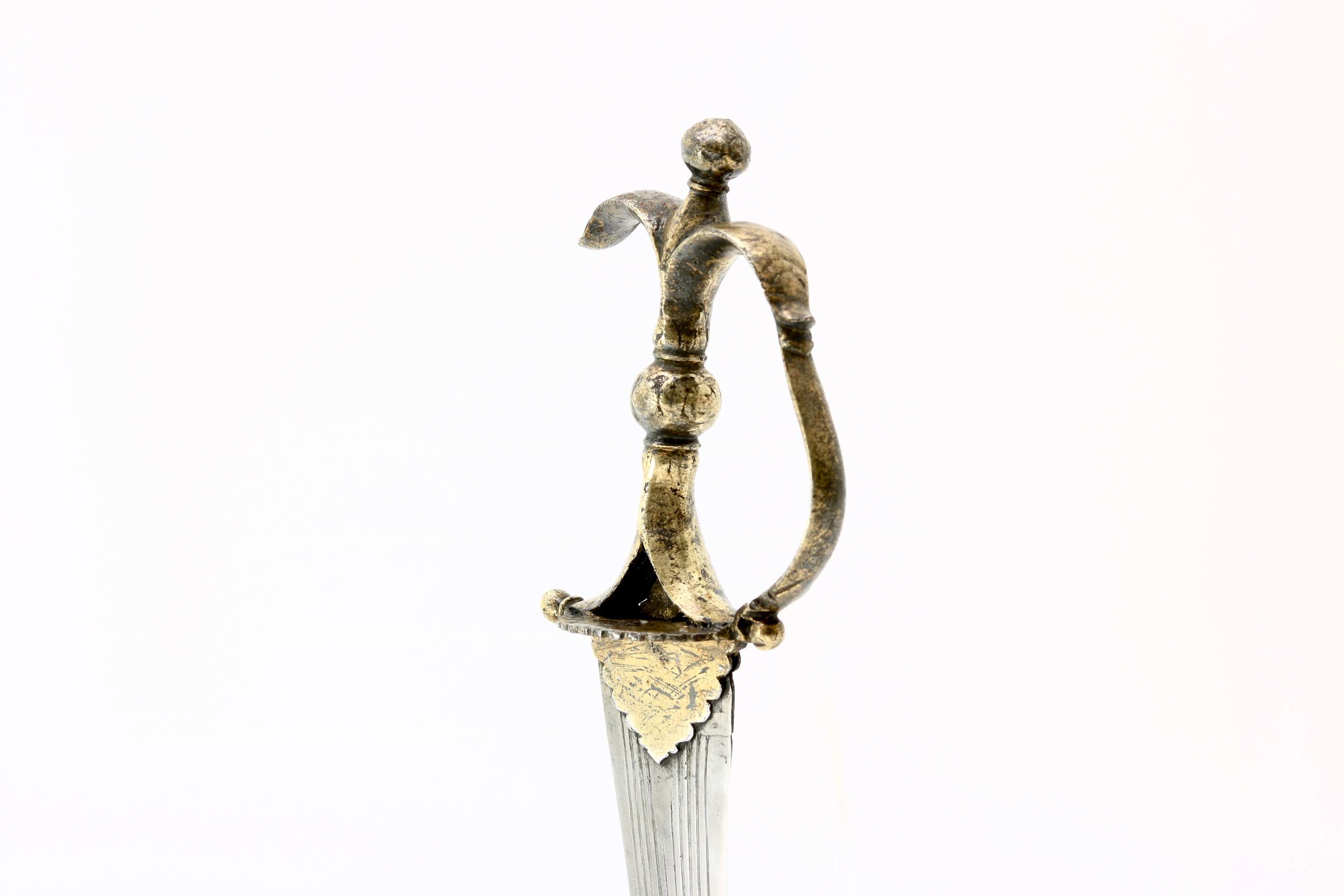 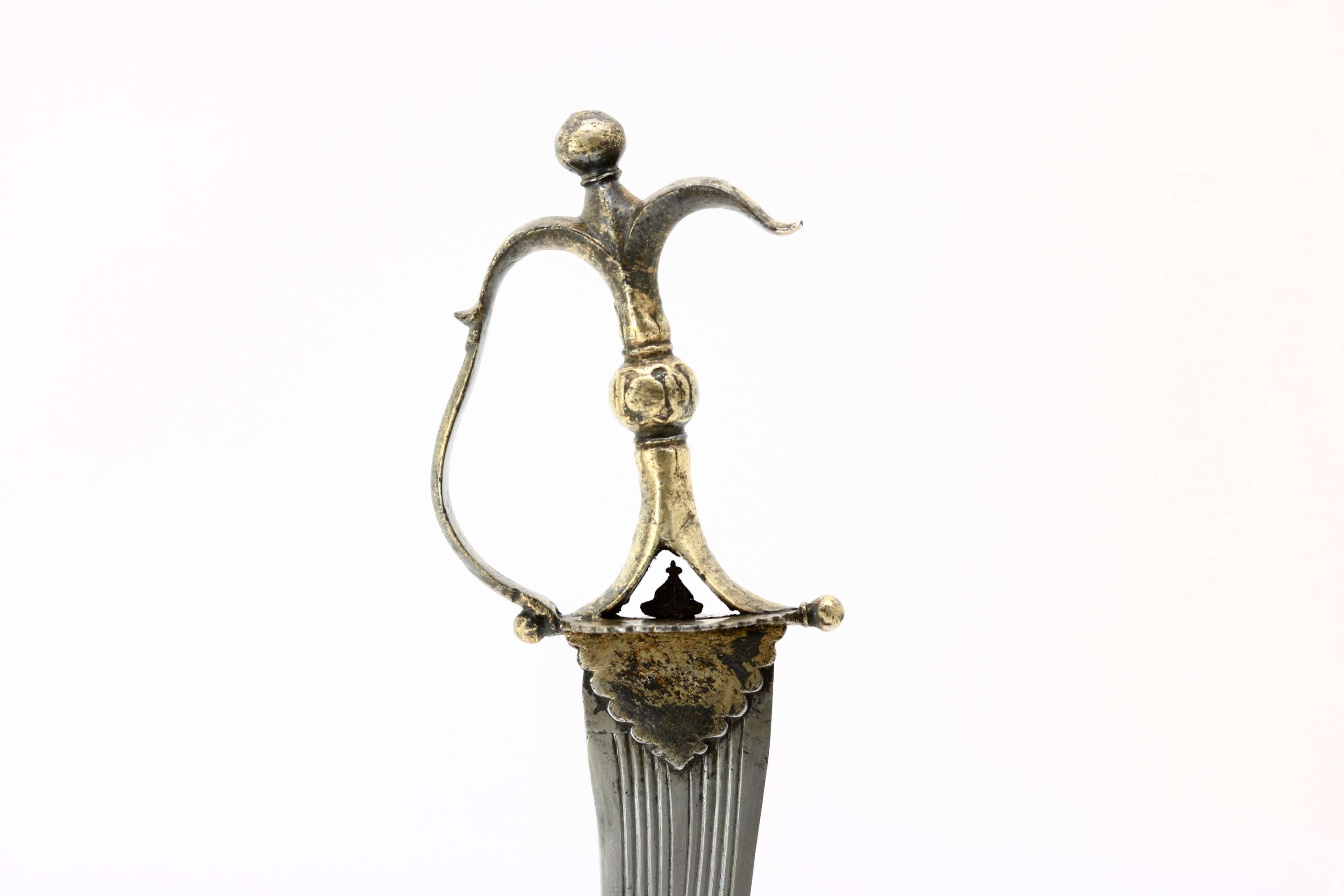 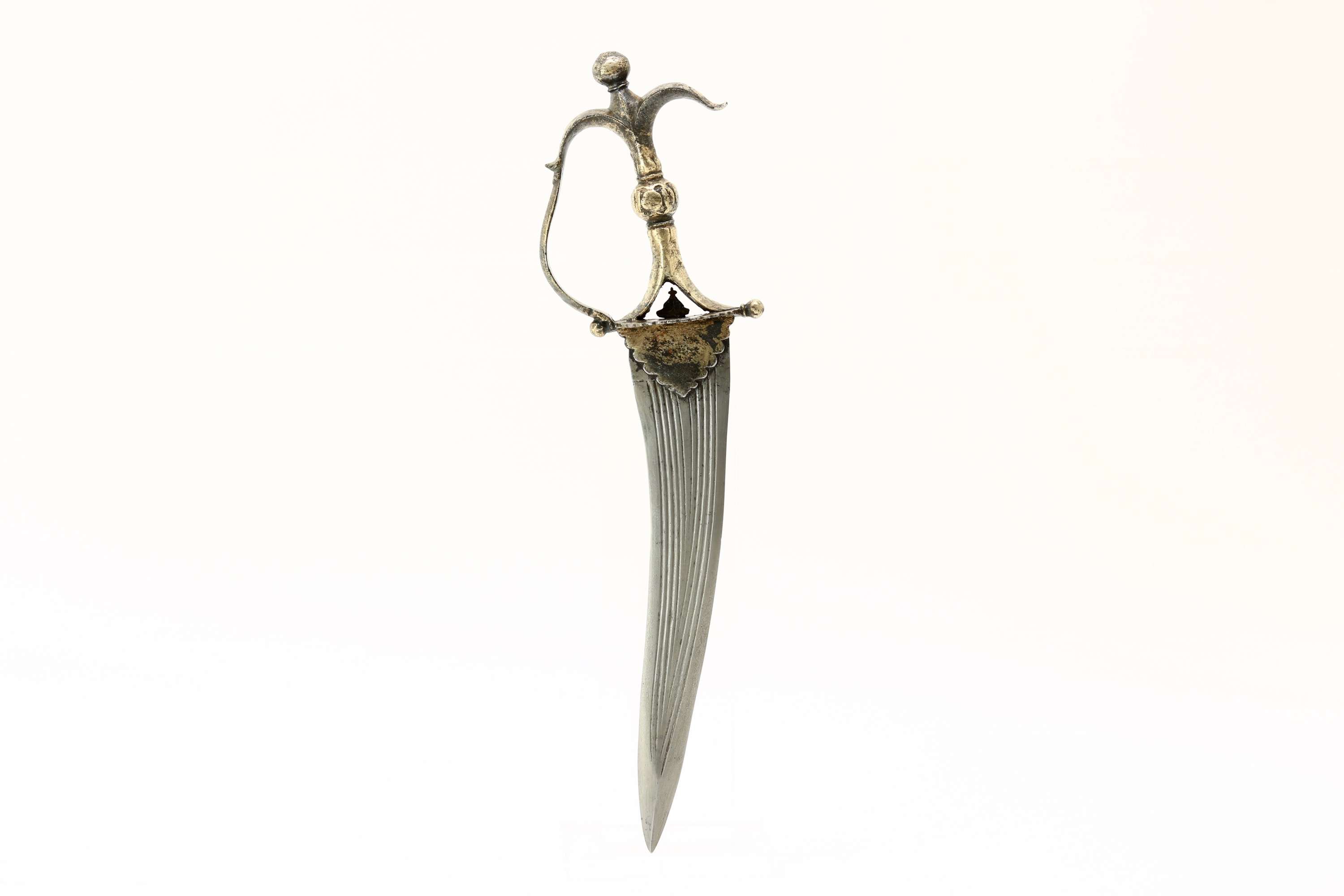