A very fine example of a Bhutanese churi chenm shortsword. The name of this type of sword derives off the wavy patterns of its scabbard. This is one of the most desirable types of Bhutanese swords.

It has a straight blade with parallel sides and an oblique tip, exhibiting hairpin laminations, typical characteristics of Bhutanese and Tibetan work. A purely Bhutanese aspect is the mirror finish, where Tibetan examples would be acid etched to reveal the hairpin folds in shades of grey, the Bhutanese sword is etched to form a relief and then polished to a mirror shine so the laminations only remain visible by the play of light over its surface.

The elegantly fluted and waisted grip section is bound with braided silver wire between two ribbed rings and partly covered with red lacquered fabric at top and bottom. The grip is topped with a silver gilt pommel of a flattened octagonal cross-section, elaborately pierced and chiseled.

The obverse of the pommel depicts symbols of Vajrayāna (Tantric) Buddhism, the main religion in Bhutan. The symbols include a parasol in the center, flanked by a pair of fish and in both far corners a vase and a conch shell. The reverse of the pommel is carved with a geometric honeycomb design with interlocking Y segments. On top of the pommel is a Druk, or "Thunder Dragon", the royal emblem of Bhutan. The king himself is referred to as "The King of Thunder".

The parasol is a symbol of protection from the suffering experienced in the lower realms of existence. The fish symbolizes moving freely and spontaneously, without fear of drowning in the ocean of suffering. The conch shell refers to the Buddha's teaching spreading in all directions like the sound of the conch trumpet, awakening his subjects from the deep slumber of ignorance. The "vase of treasure" symbolizes long life, wealth and prosperity.

The honeycomb pattern on the obverse of the pommel is a very stylized rendition of the seed pod of a lotus. The lotus was highly regarded in both Buddhism for emerging from the murky, muddy depths, growing towards the light and producing a pristinely white flower. The process was often likened to the path of enlightenment.

The wooden scabbard is entirely clad in silver of very high purity, as indicated by the deep blue patina that formed here and there. It is divided in three sections, with the middle section exhibiting the churi chenm pattern. It consists of triple W, with designs of flowers in splashing water, all chased, chiseled and parcel gilt. The section is separated from the plain scabbard pieces by bands of chiseled decoration in the form of lotus leaf rims, each bearing several symbols of Tantric Buddhism.

Also see a notable Bhutanese sword that we sold in 2016.

Apart from the patina that formed on various parts, it is in near mind condition with no significant damage, wear, and no repairs whatsoever. All surfaces retain their original finish.

A very good example of a Bhutanese churi chenm, a sword of the patag form whose name derives off the decoration of its scabbard. Such swords were worn by the king of Bhutan, his main advisor, and other senior officials since the times of Ugyen Wangchuck. 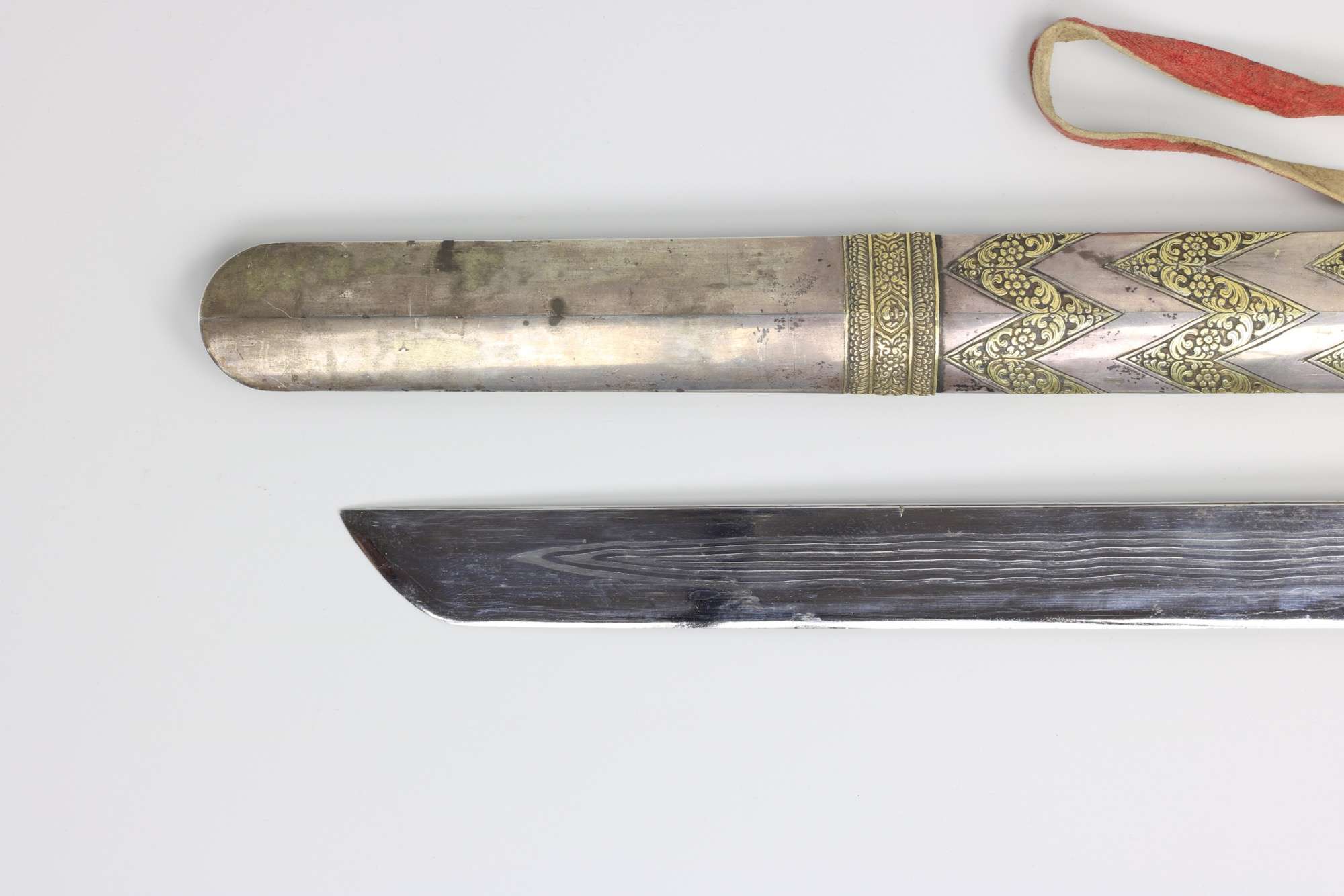 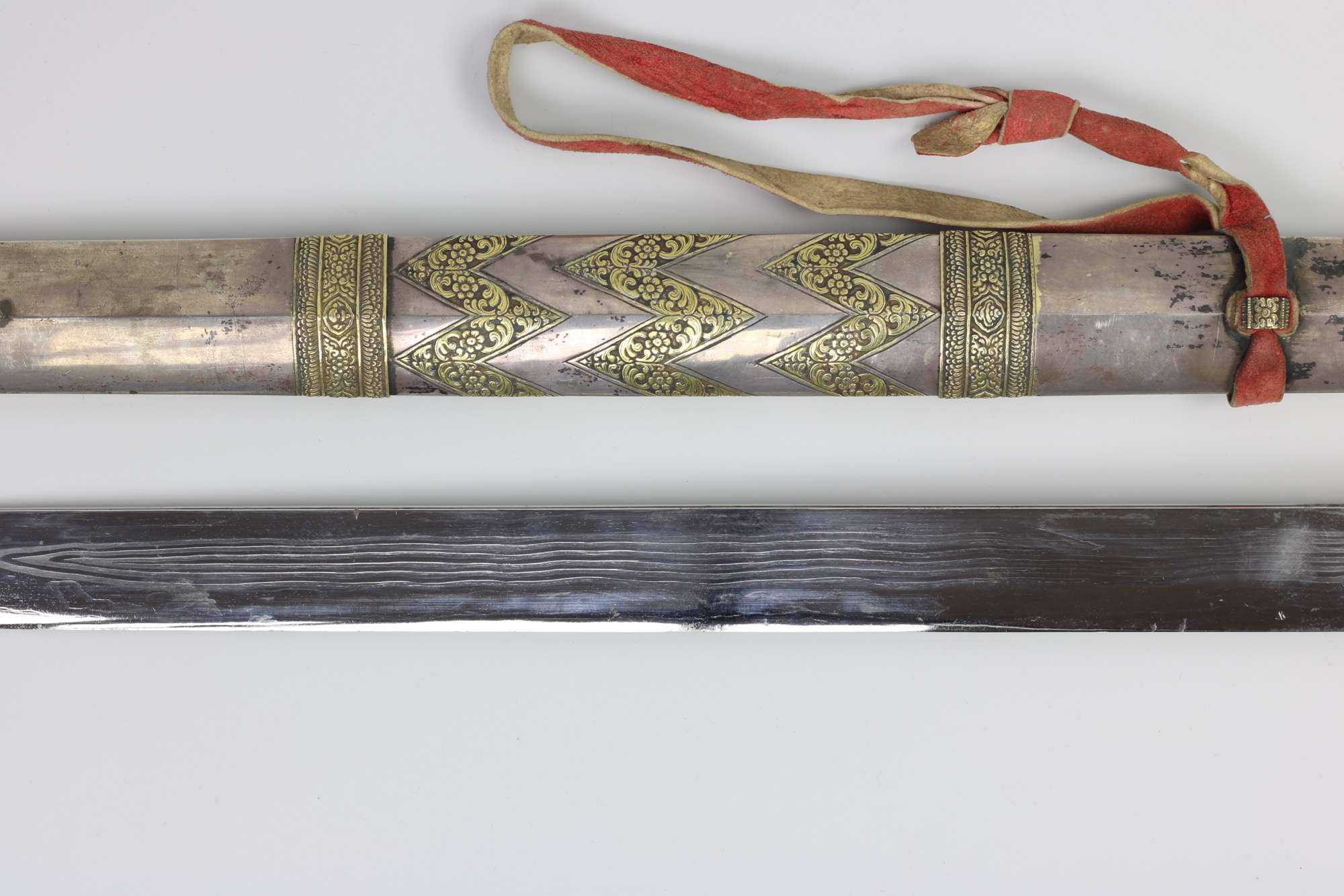 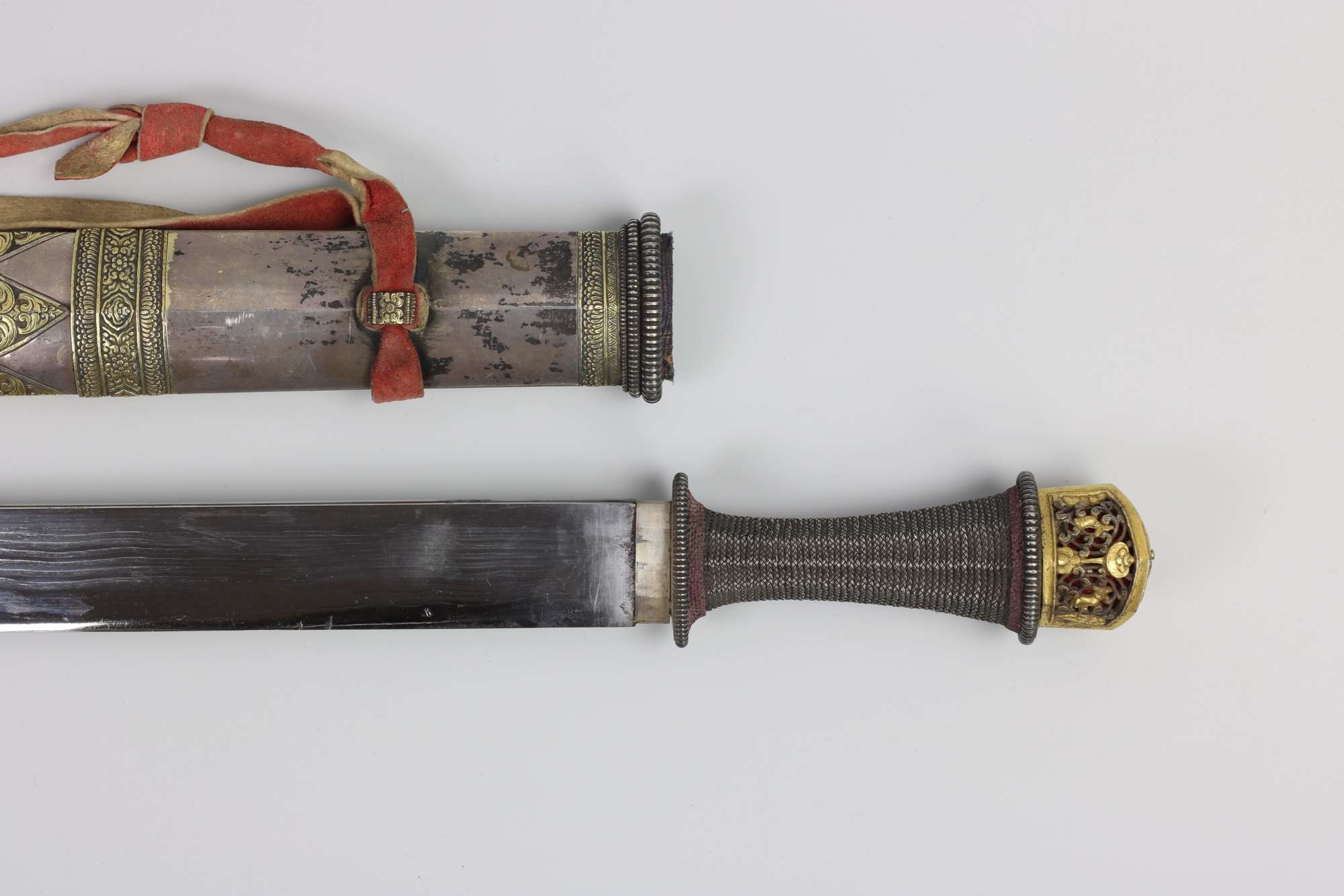 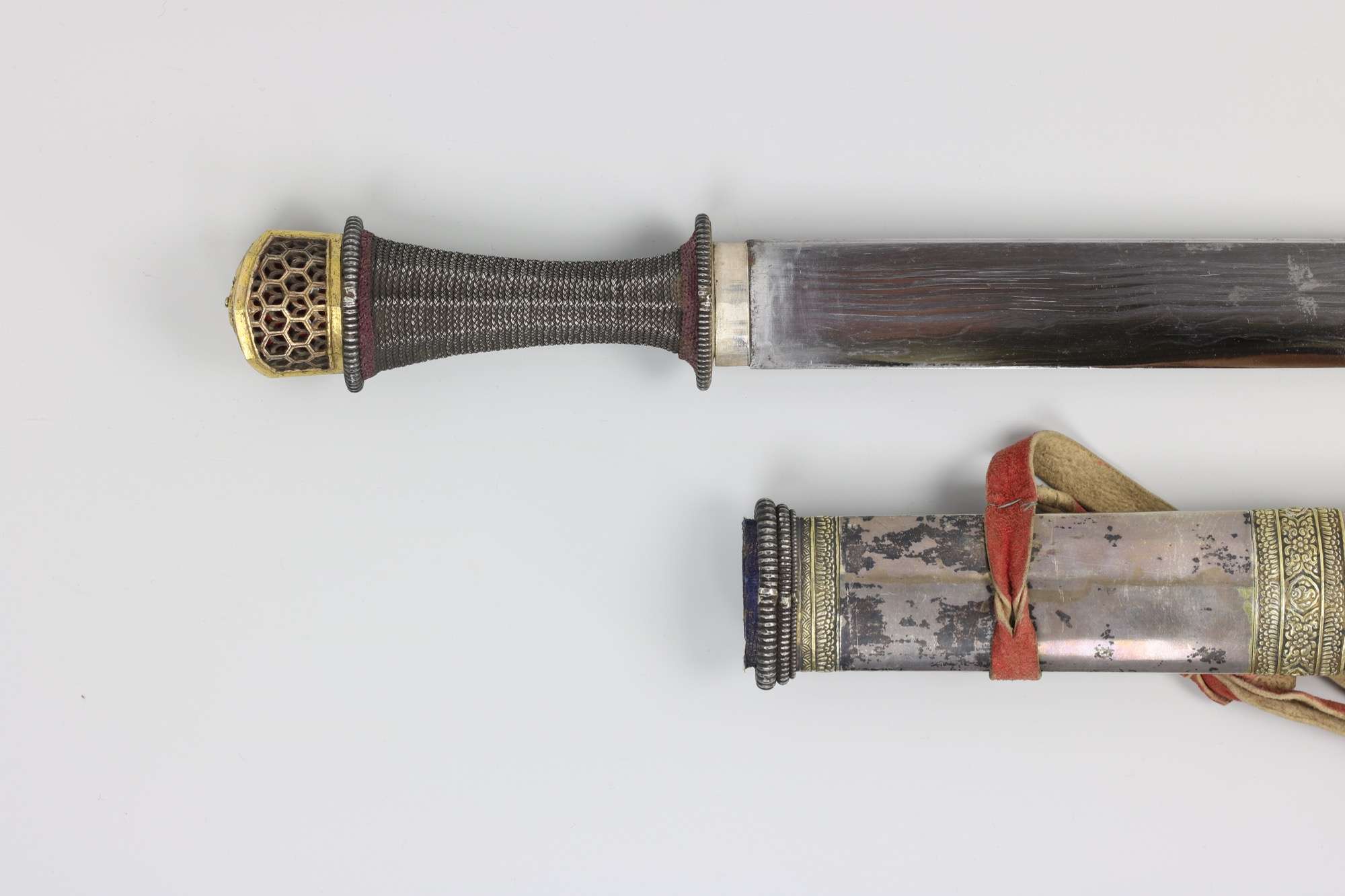 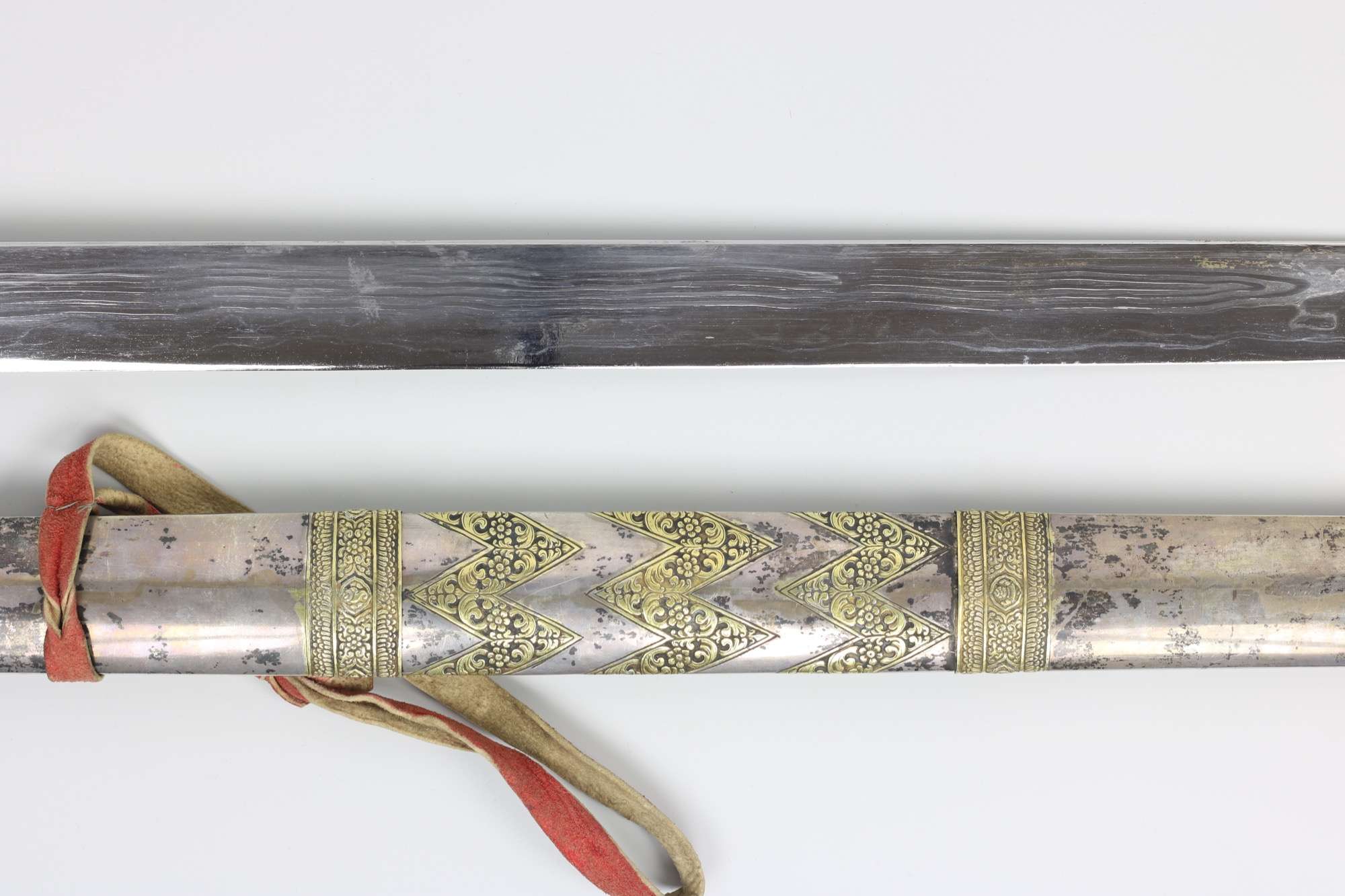 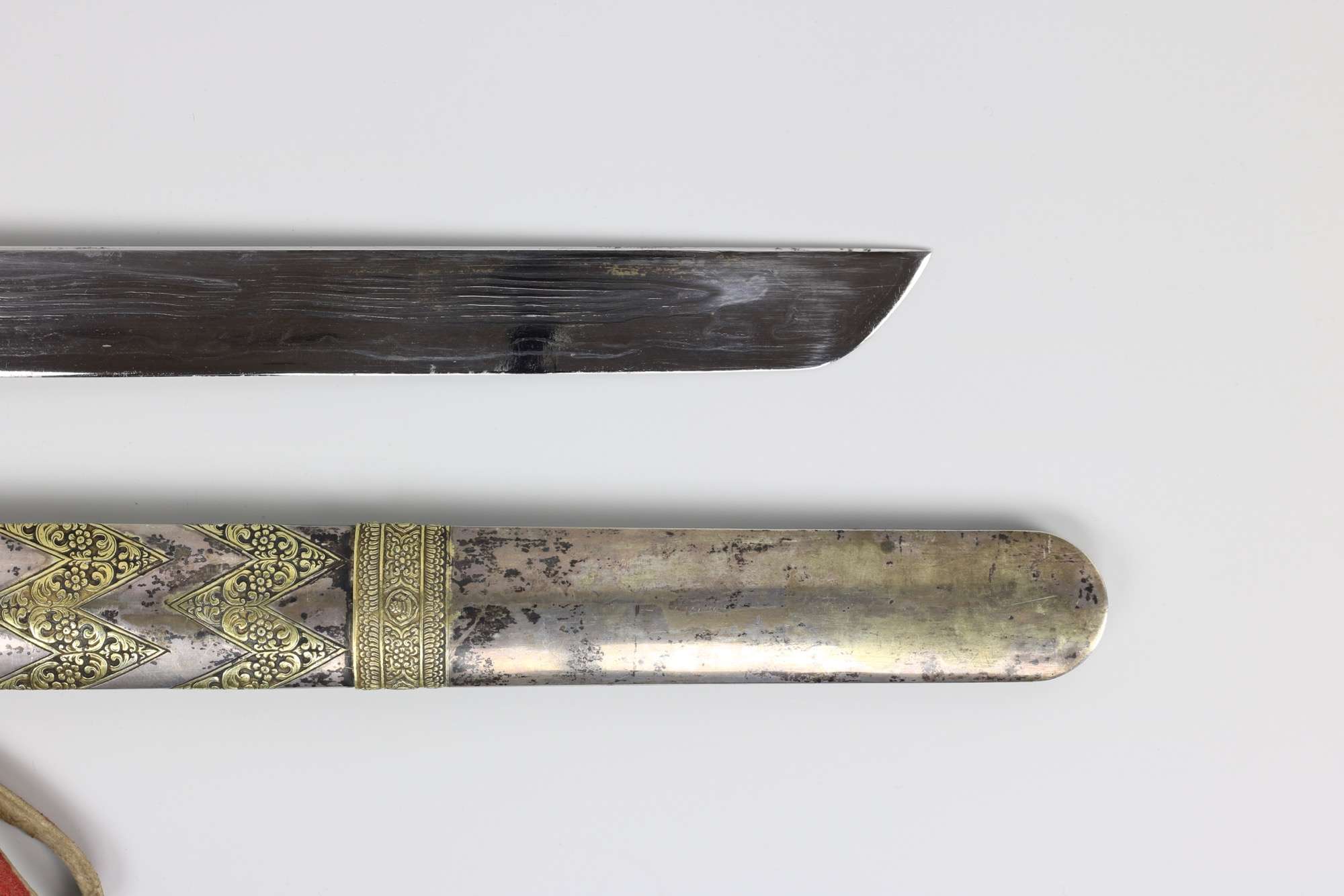 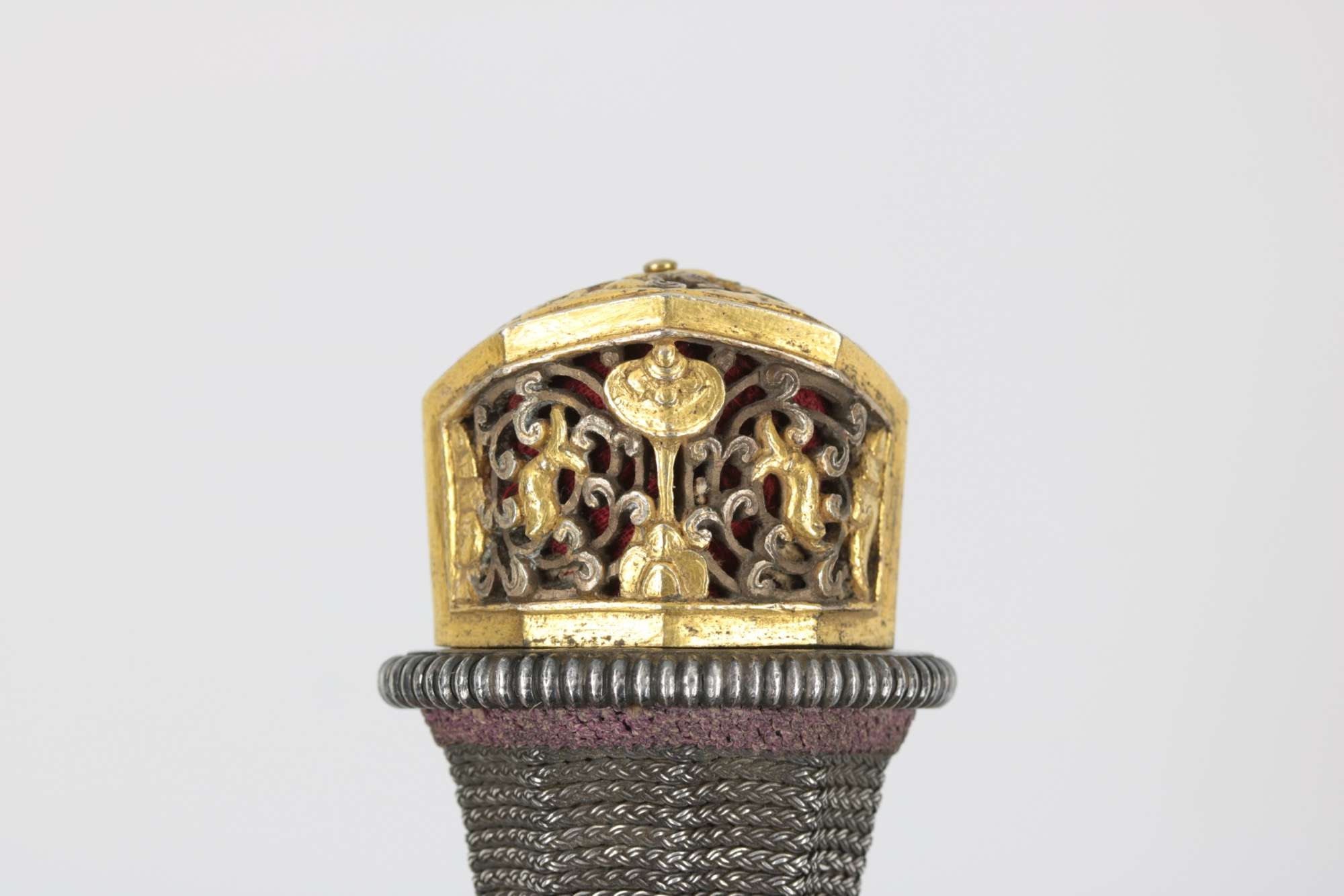 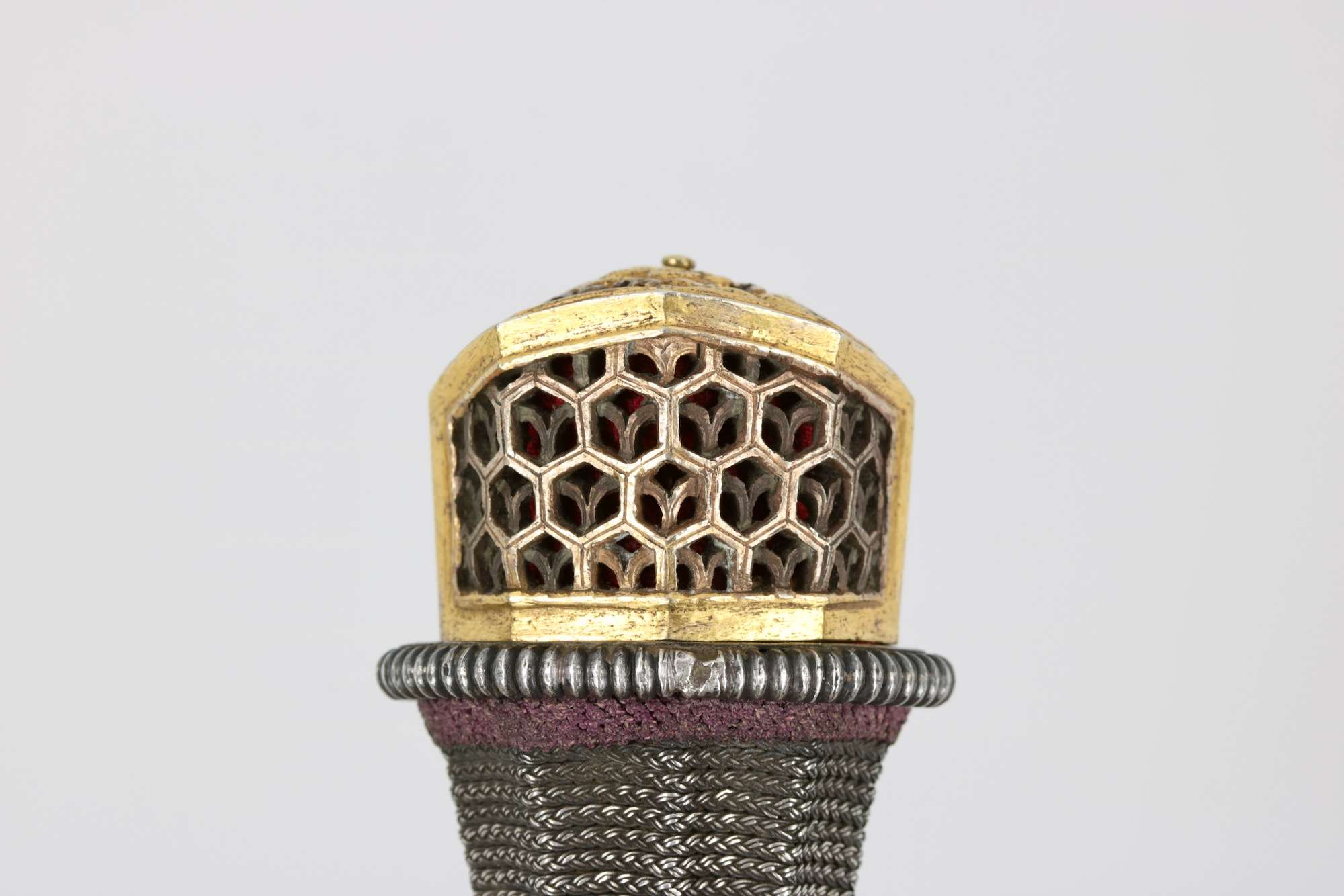 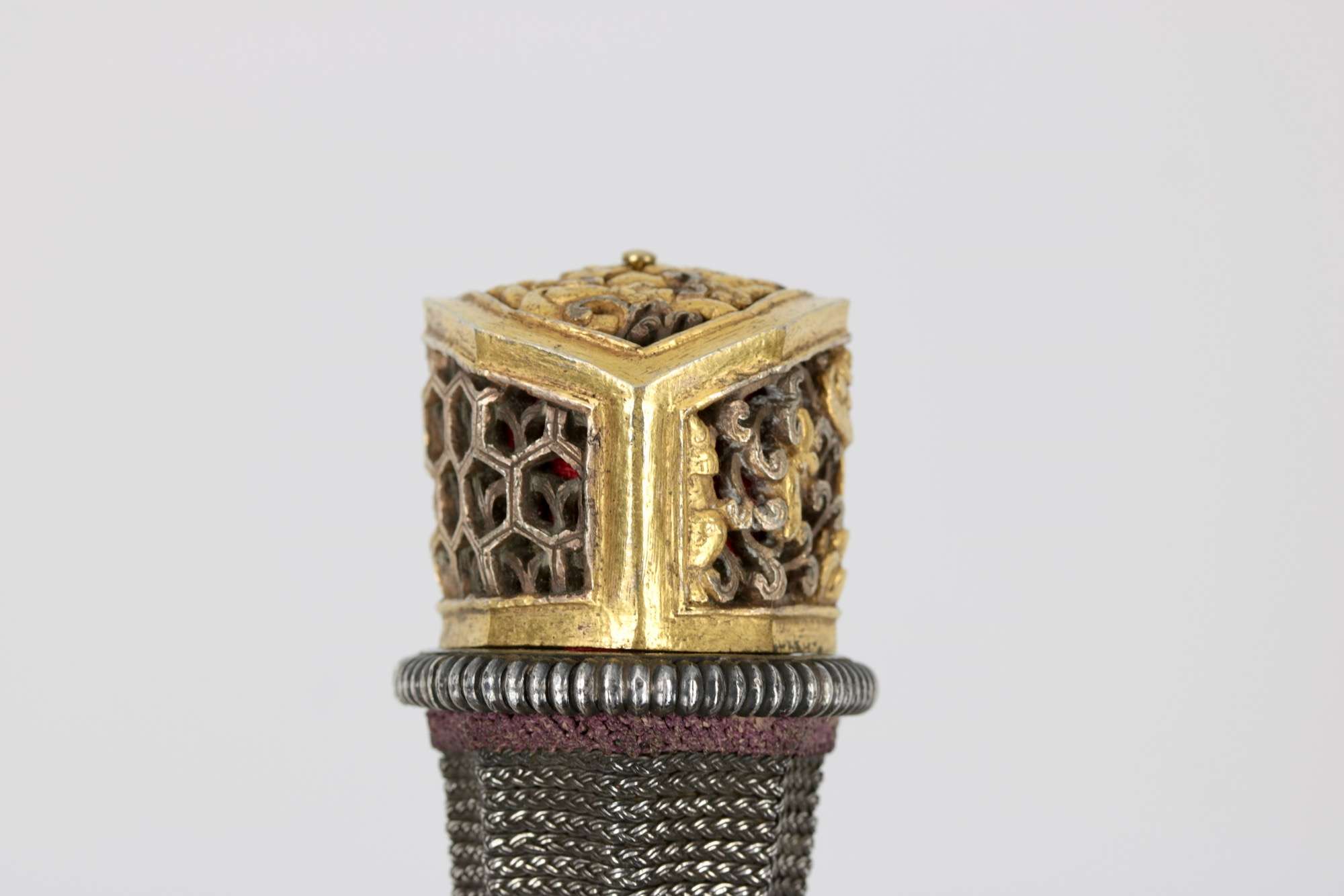 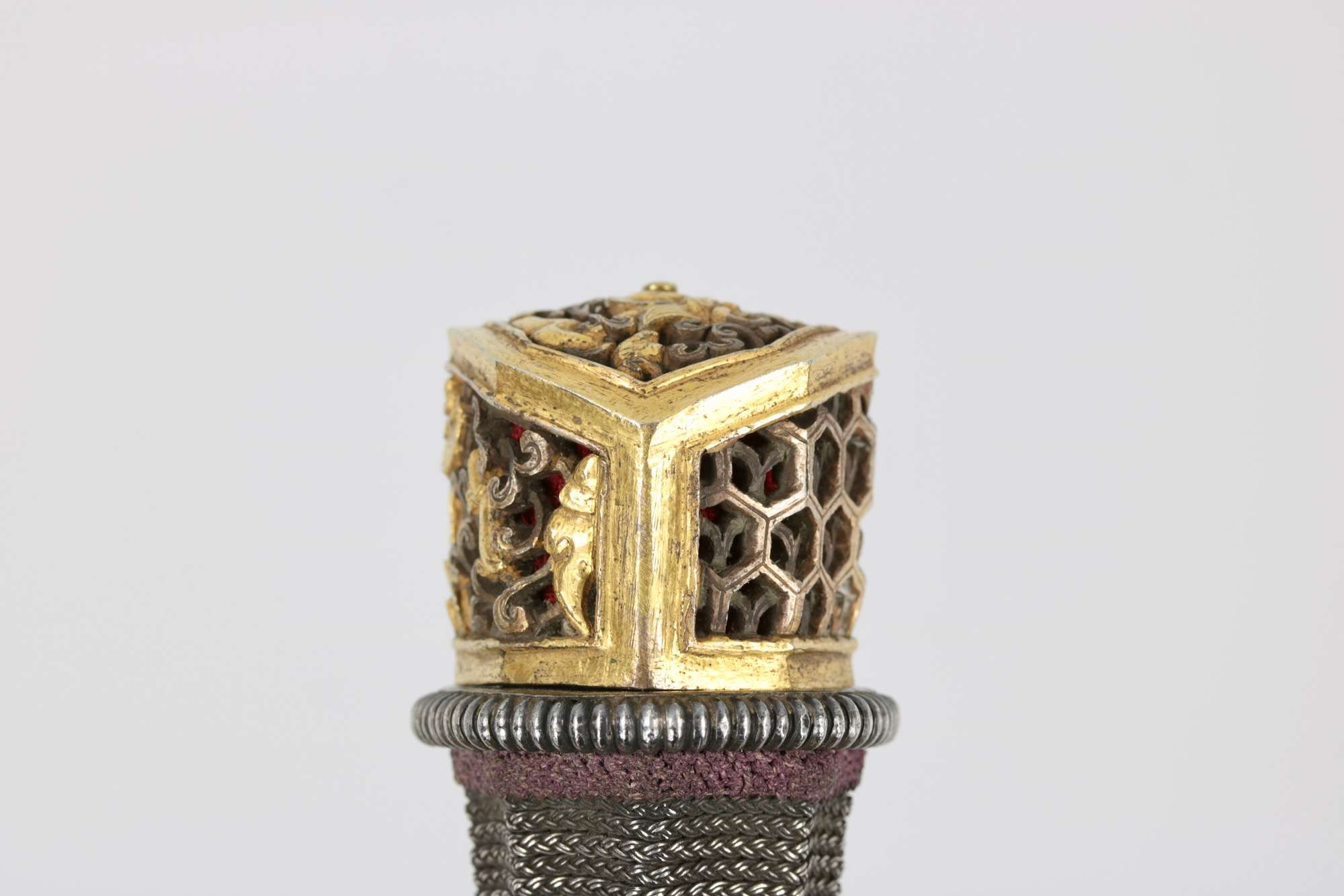 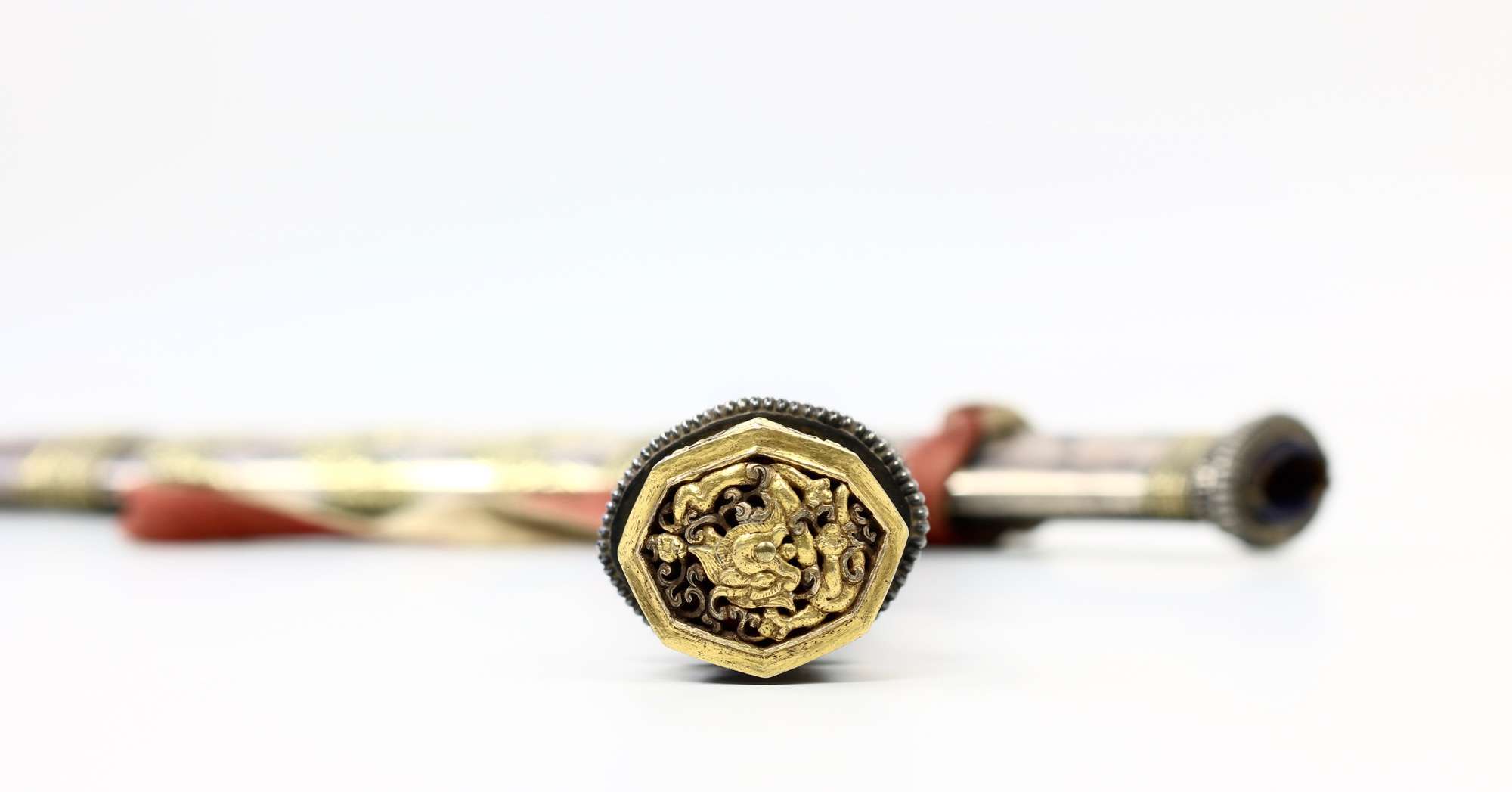 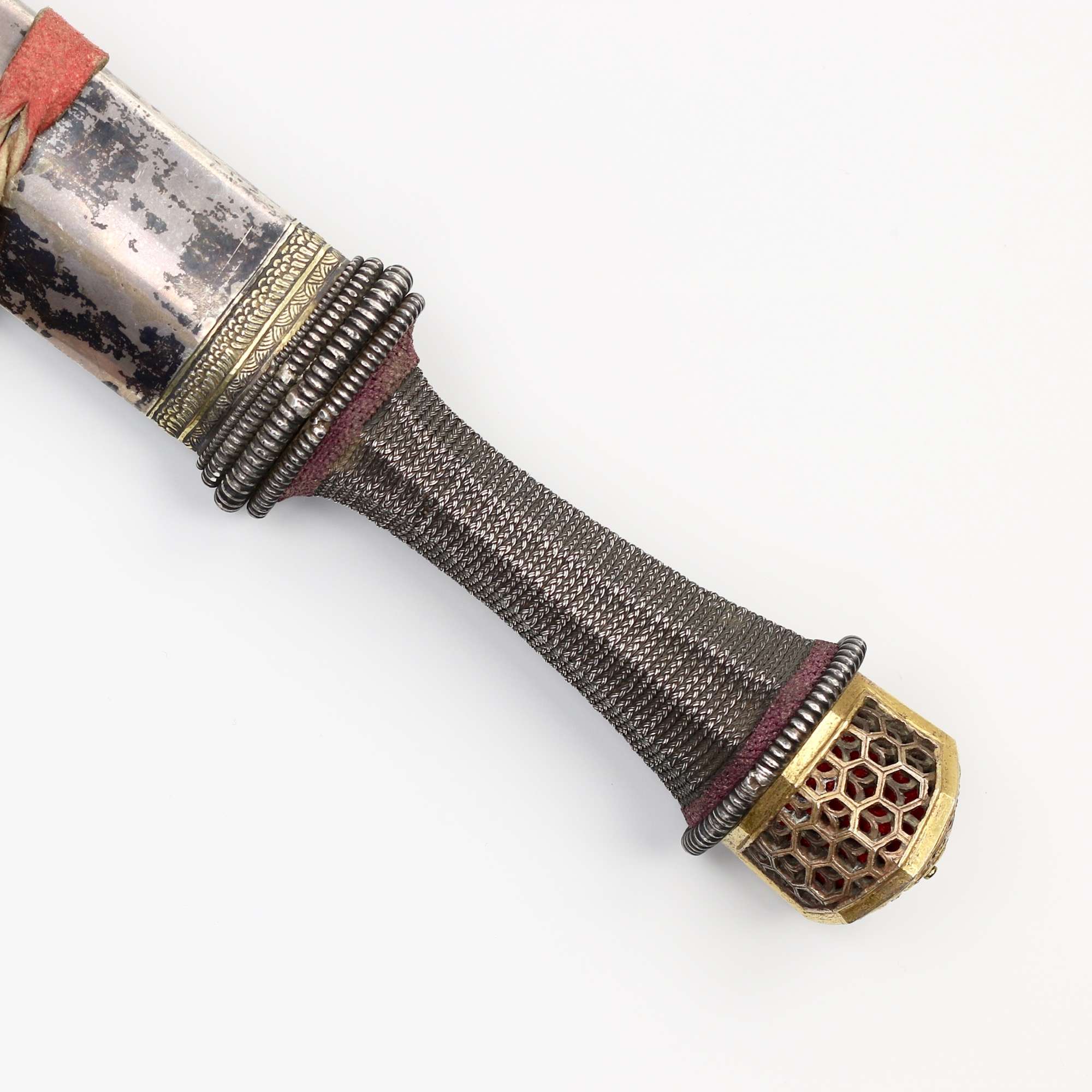 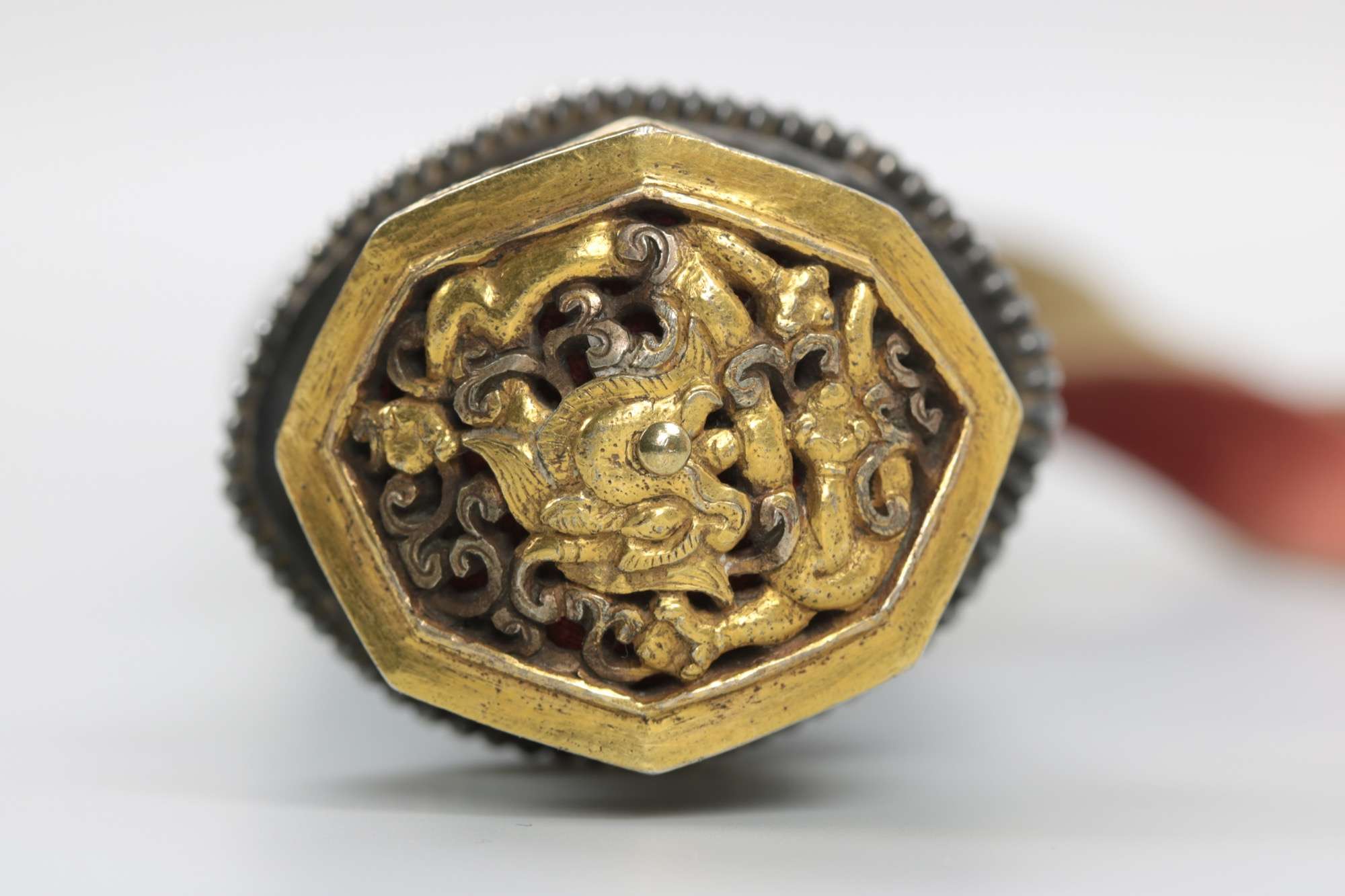 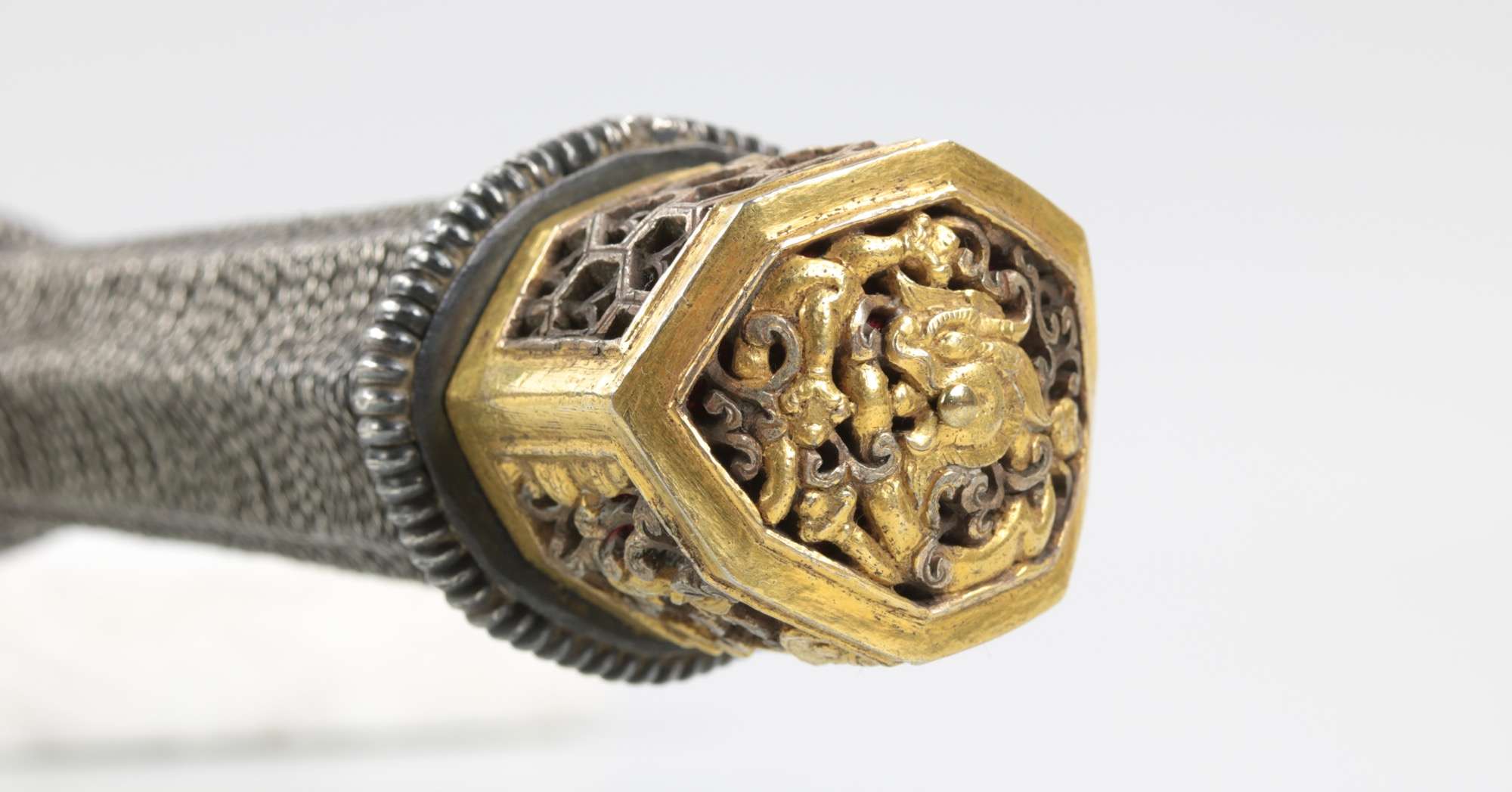 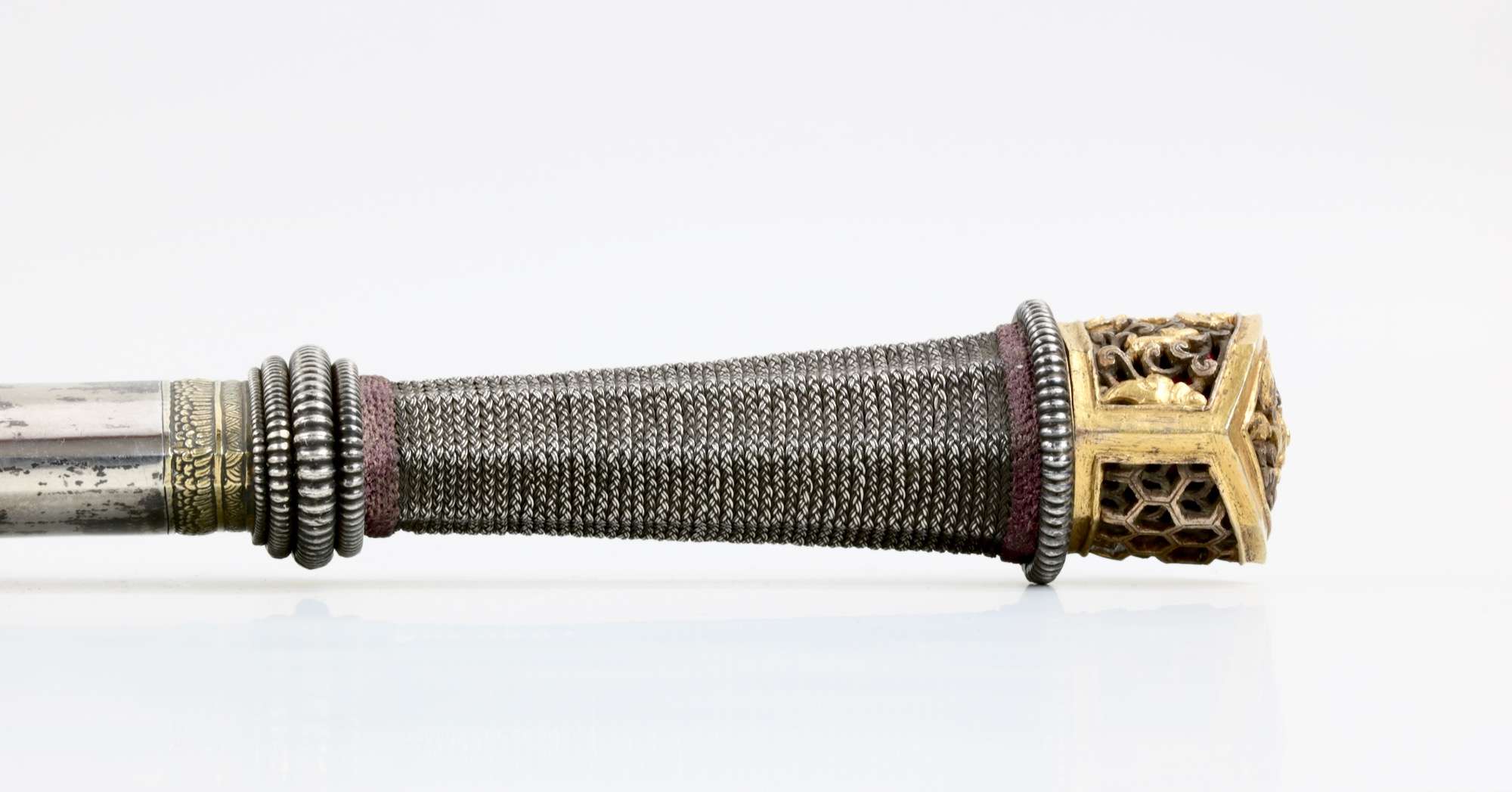 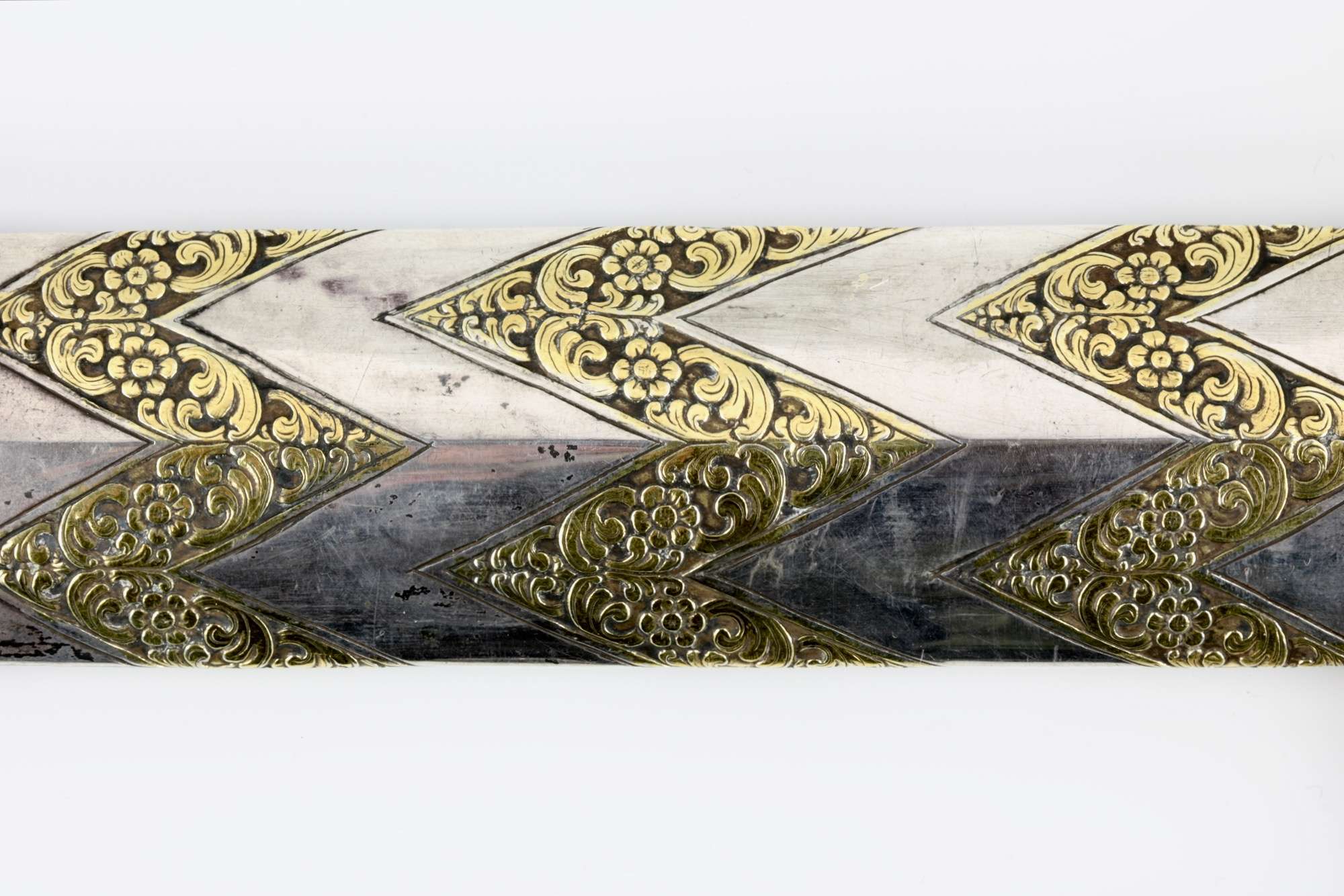 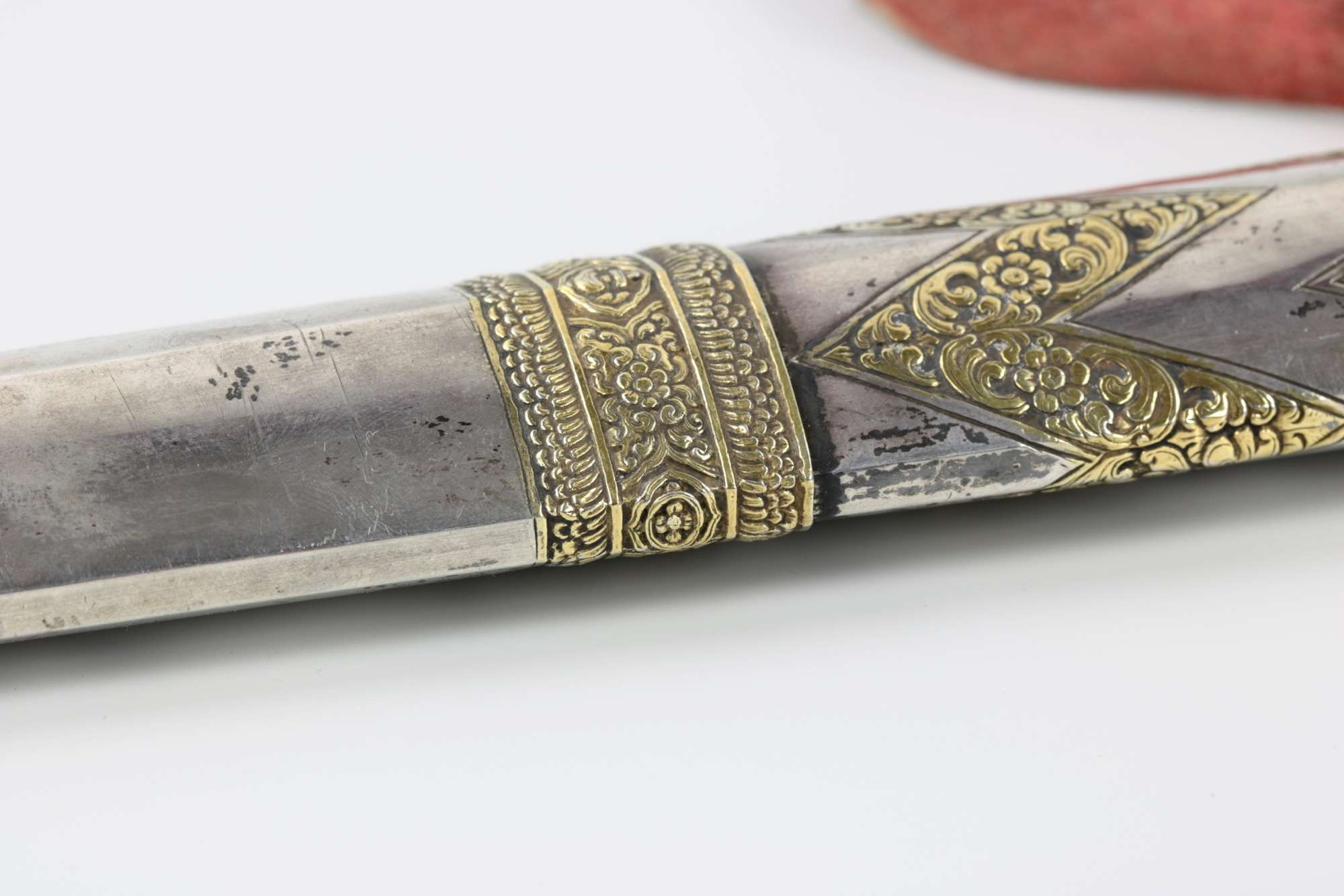 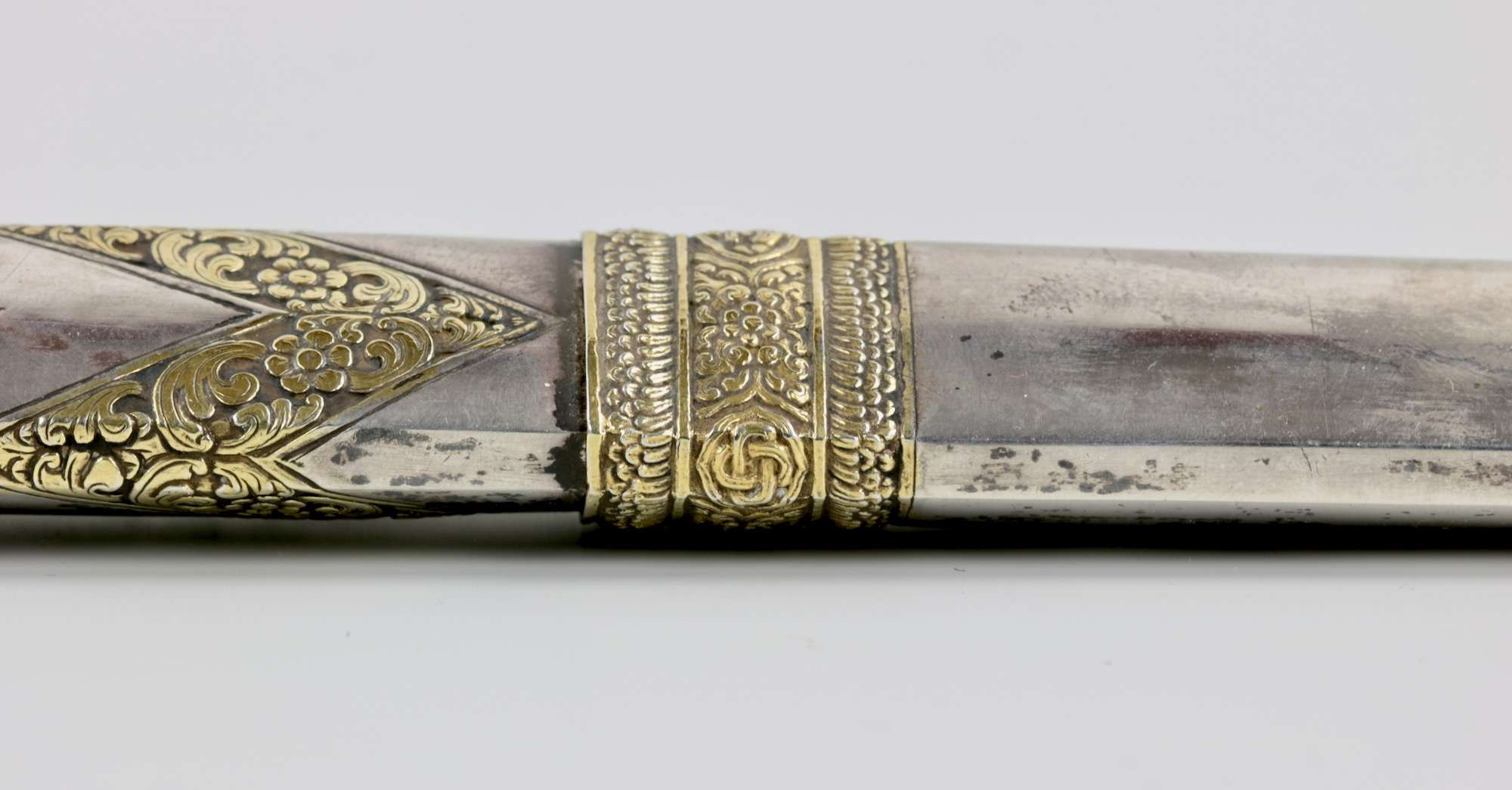 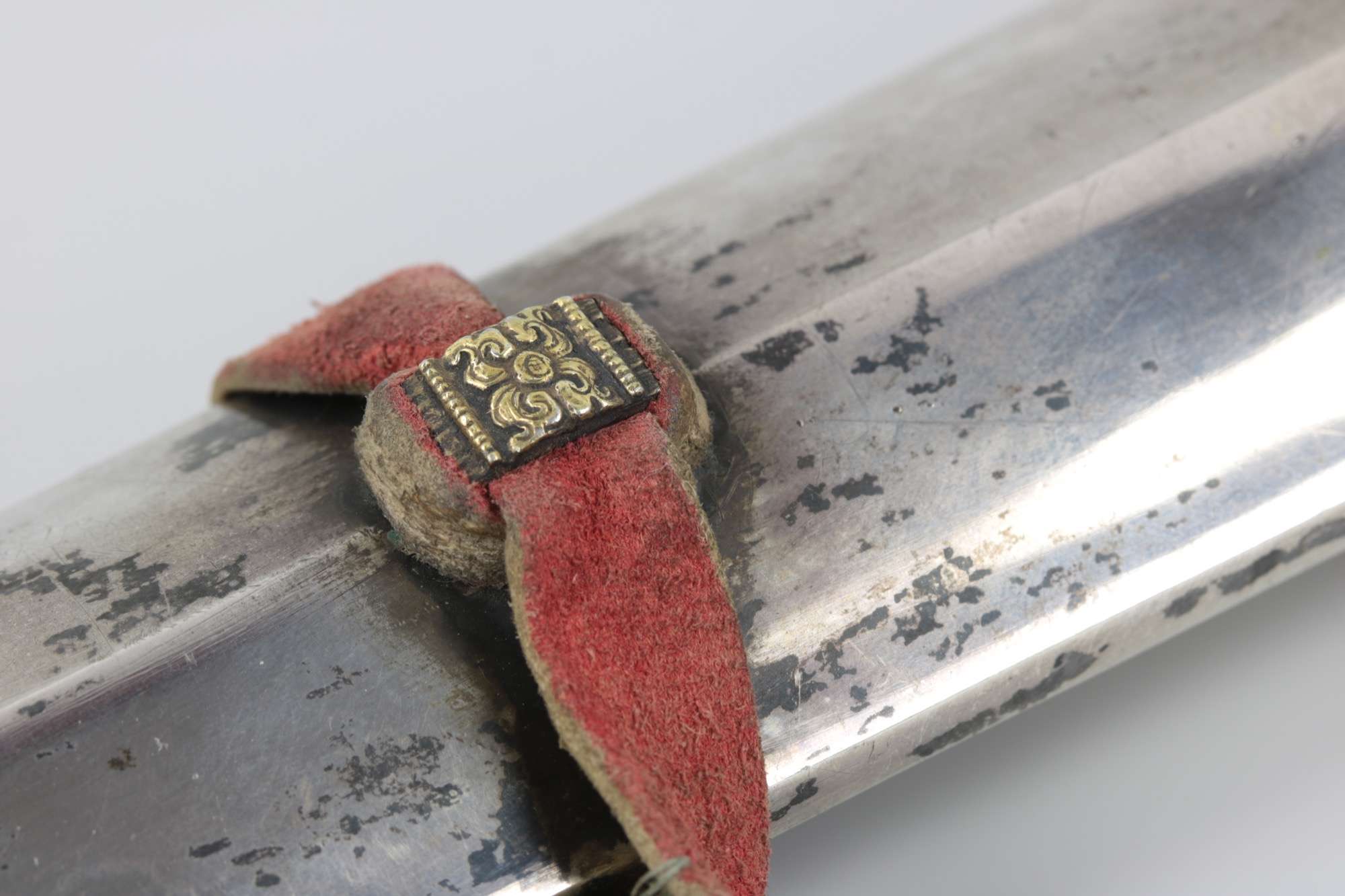 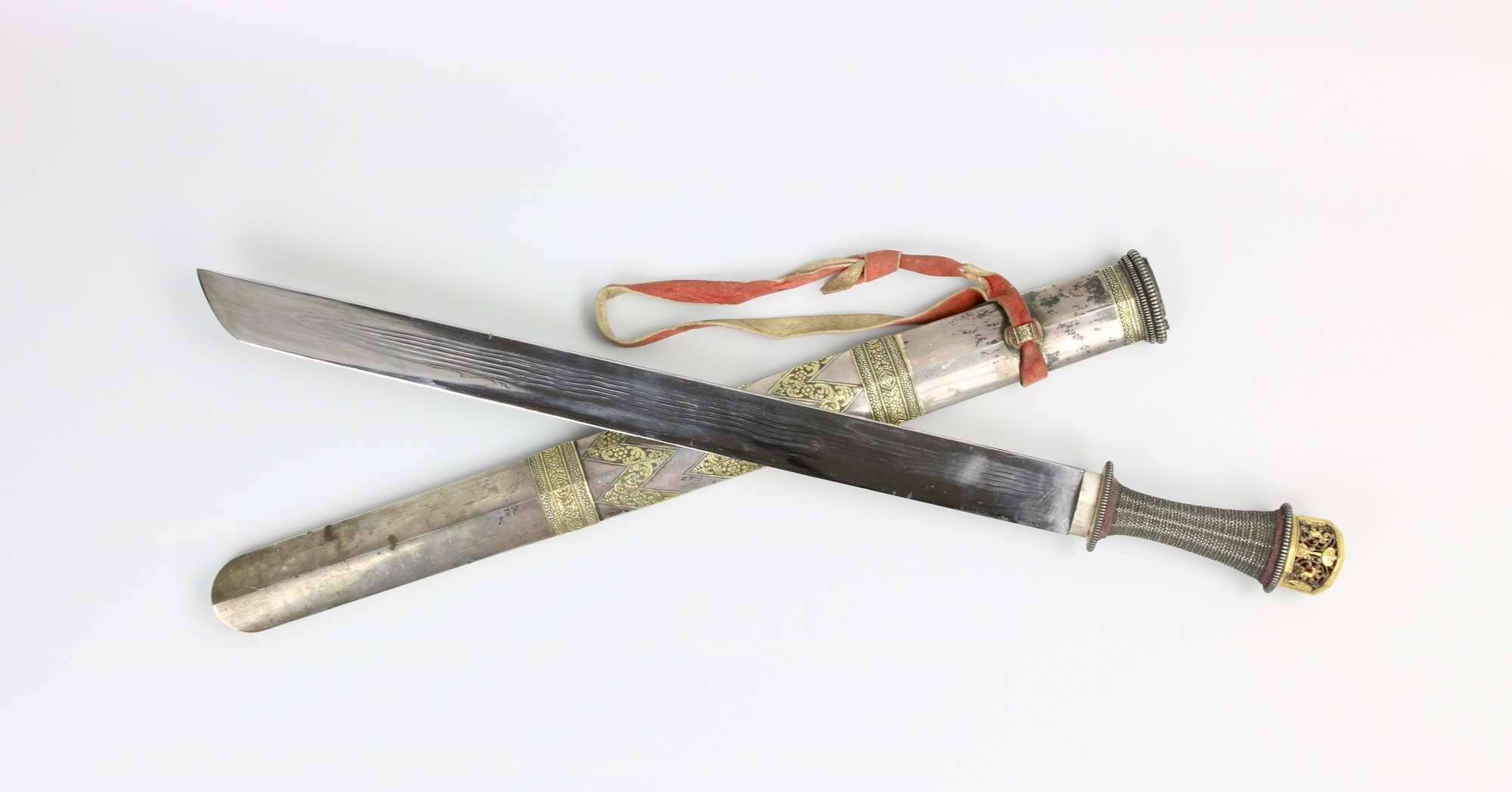 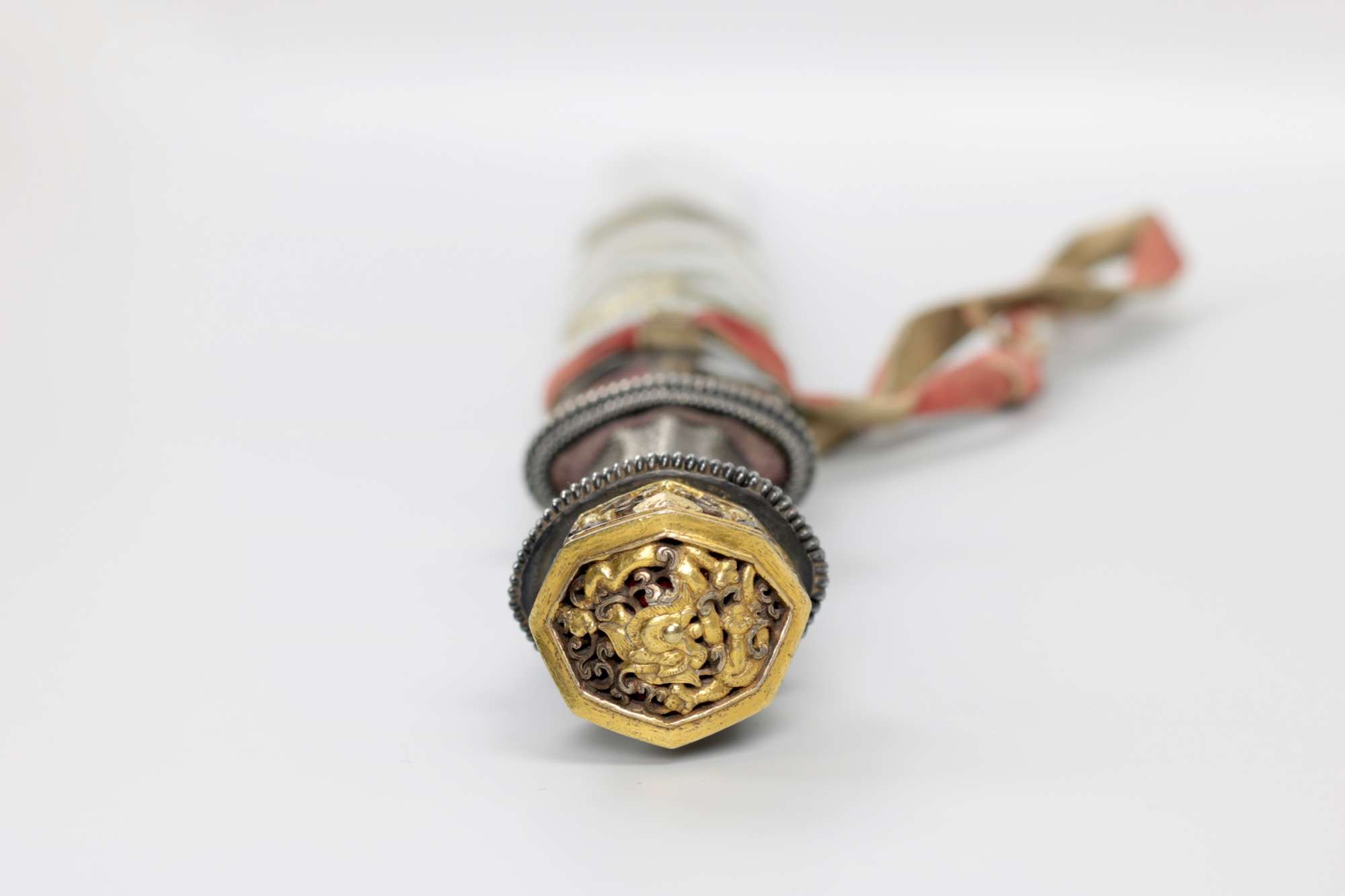 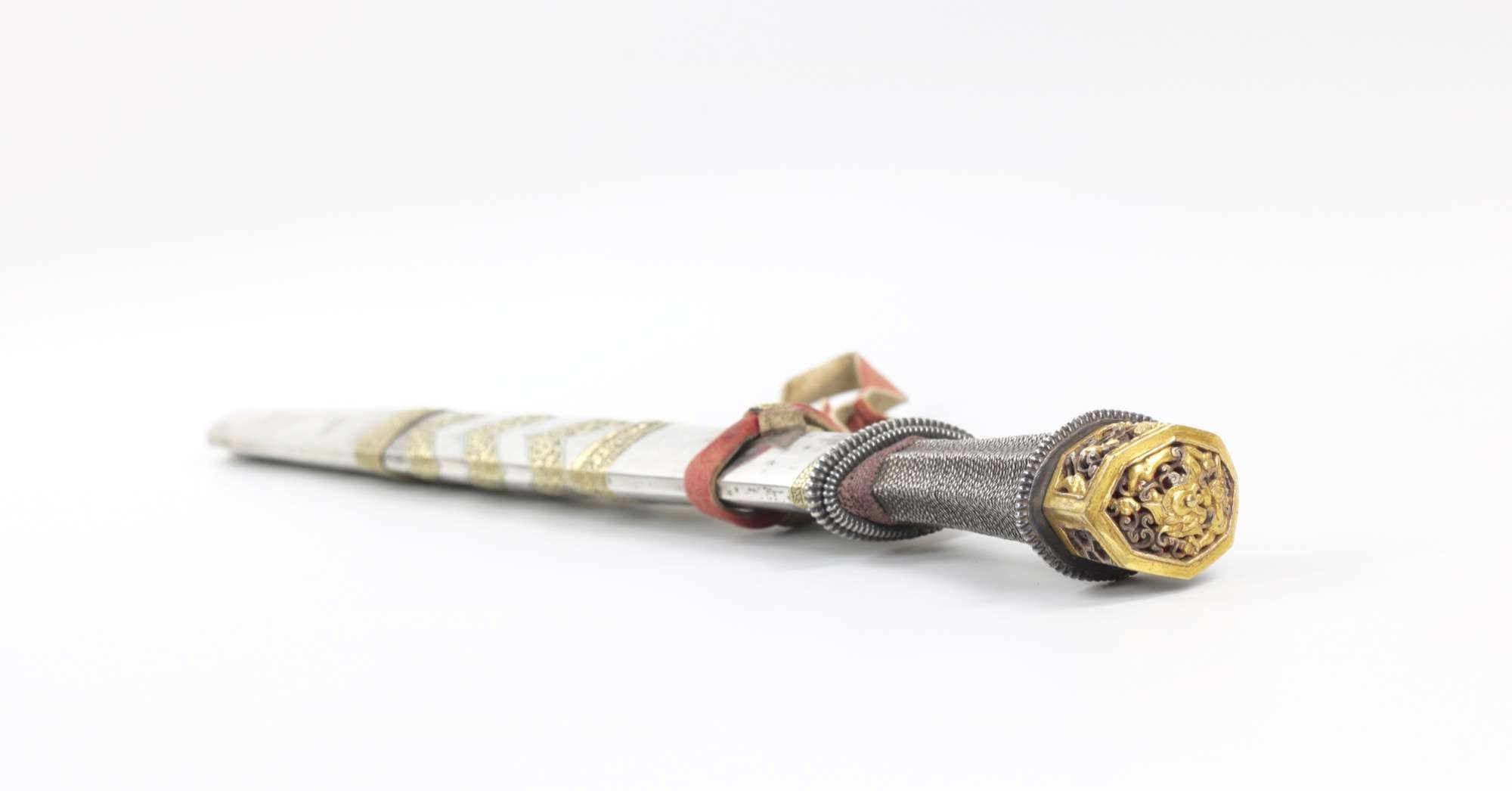 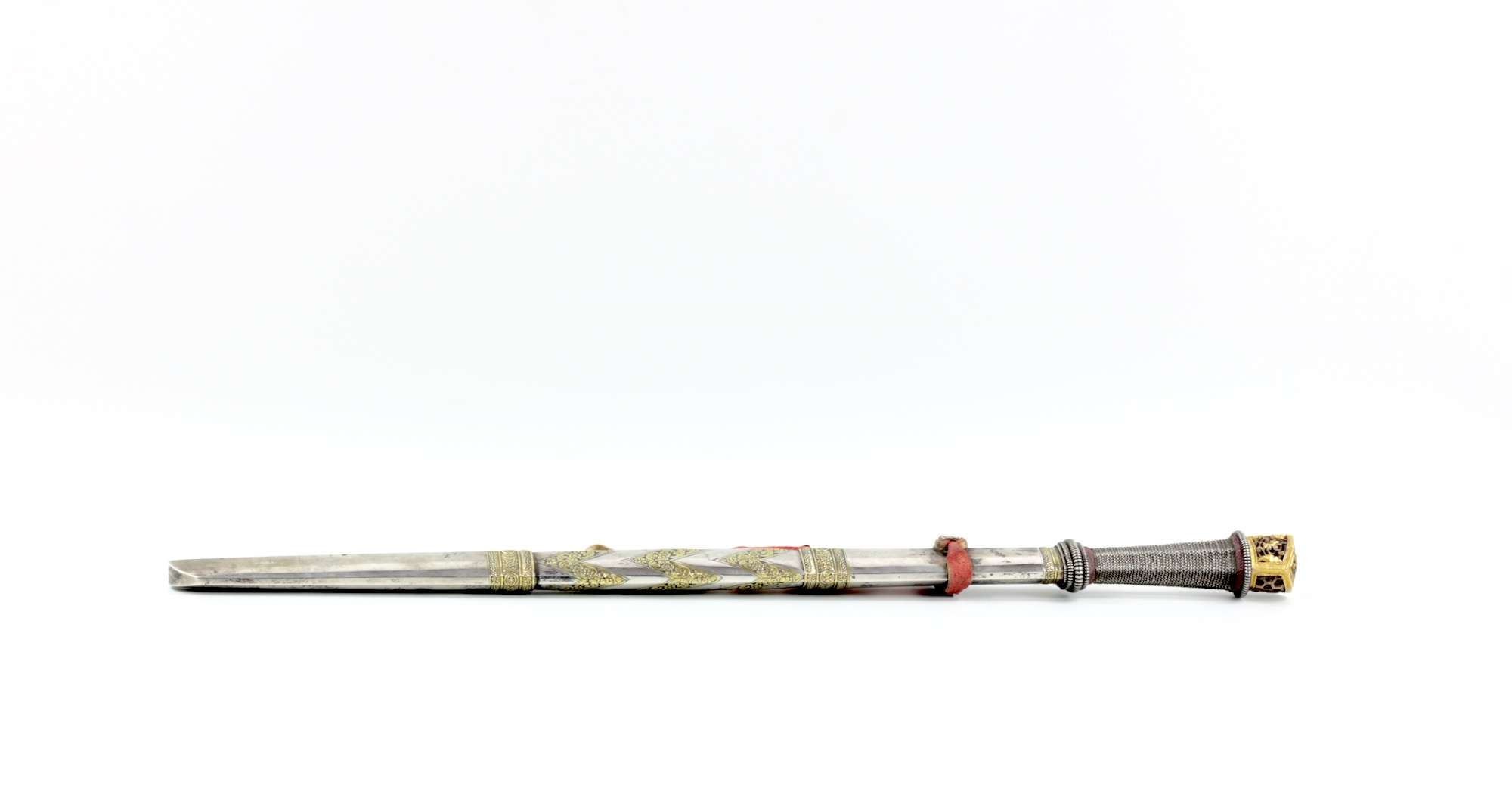