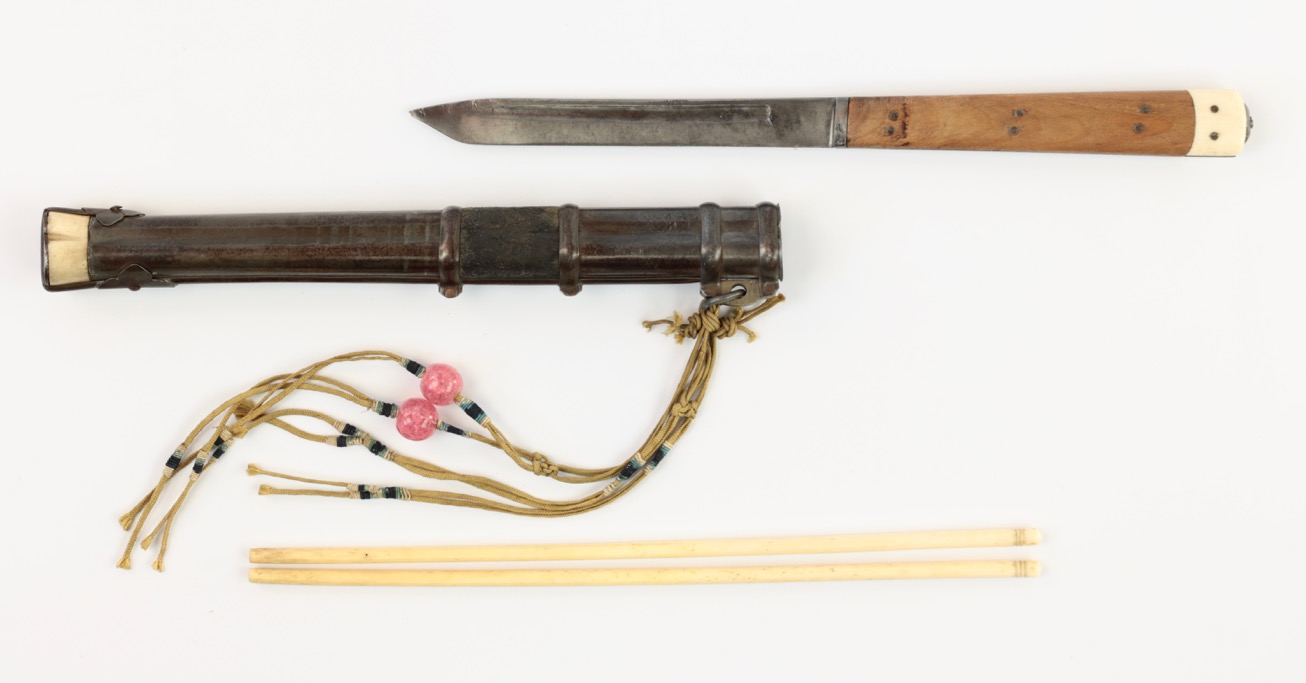 Sets with a knife and chopsticks and sometimes some other utensils were common all over the Qing empire. The various cultures that coexisted within this realm gave their own twist to the design.

Under the Qianlong emperor (reigned 1736-1796) the wearing of these sets became mandatory for all Manchus and Mongols. Their tradition had been cutting meat straight from the bone. This was in contrast to the Chinese method of eating, where the food was pre-cut into bite sized pieces that could be eaten with chopsticks. In an attempt to preserve elements of the frugal and outdoorish nature of the Manchu and Mongol lifestyles under the Qing, it was illegal for them to have their meat pre-cut. And so, all Manchus and Mongols were required to wear these trousse sets to eat their meat in a traditional way.

A Chinese trousse set consisting of a knife with wood and bone handle, two bone chopsticks, and a wooden scabbard covered with metal and leather. The knife is still in original finish with a beautiful dark grey patina, in its current condition it still shows its forge folded steel construction with a high carbon edge plate exposed from softer layers of iron and steel.

The scabbard endpiece is a piece of bone held by a metal strap that is shaped like a flower on either end. The fit and finish of all parts is excellent. The scabbard has a suspension bar with attached to it a number of tassels with bright pink glass trinkets. The tassels itself are yellow with wrappings of blue, light blue and dark blue cord. Such cords have been in fashion at the court in Beijing in the 18th and 19th century and started to reach the Beijing upper class by the late 19th century.

A nice set of knife and chopsticks with their original tassels still attached. The set is of good quality manufacture and remains in near excellent condition.