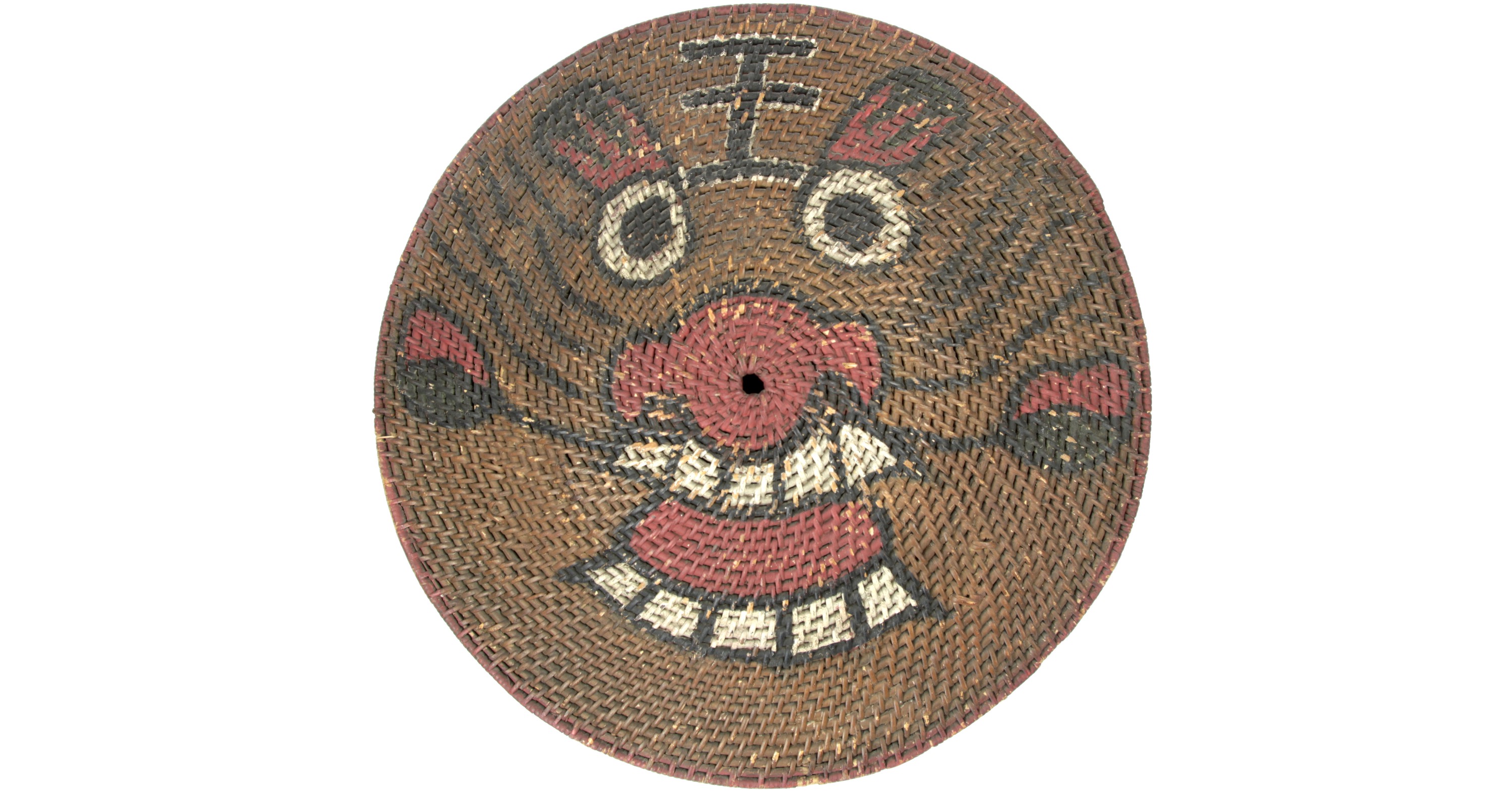 The Chinese téngpái (藤牌) or "rattan shield" was the subject of much fascination by foreign observers. The stylized tiger painted on the face of most of these shields were often explained as "grotesque demon faces" that were undoubtedly there to scare the opponent. Quite the opposite was true. The word for tiger is pronounced hǔ (虎) in Mandarin, which sounds very close to the word for protection, hù (護). Tigers have long been regarded as protective deities and images of tigers were pasted on doors, and even appear on children's hats to ward off evil. The tigers on these shields were there to reassure the often highly superstitious Qing soldiers of their protective qualities.

Such shields may appear of limited effectiveness, but I have made and tested a shield and the result was surprising. You can in fact cut into its rim 10-15 cm, but your sword or saber will be completely stuck. Thrusting into the shield gave similar results. So in a fight, the last thing one would want to do is hit the shield and have it capture your weapon; the shield-bearer will be quick to respond. On top of that, they were easy to produce, light, and relatively inexpensive.

The 1766 Huangchao Liqi Tushi (皇朝禮器圖式) still lists large knives on poles as being used by the imperial Rattan Shield Troops of the Téngpáiyíng (藤牌營). This suggests that the formations mentioned by Coyett in the 17th century remained pretty much intact in mid 18th-century Chinese warfare.

They came on in pairs, each man carrying a shield and matched with another man with either sword or spear. They maneuvered round and round the enclosure, cutting' and parrying. Gradually the men with the shields worked round the men without shields, and encircled them. At this juncture about forty or fifty mounted soldiers came galloping in, and tried to attack the shielded men in order to save the surrounded men. The shielded men at once fell flat on the ground and began to roll and roll towards the horsemen. This was supposed to be a deadly attack upon the horses, and the latter retired. At the same time the men inside had got out, and so ended the attack.2

A very well-preserved example of a Chinese rattan shield. It is made of about 10mm thick rattan coil that was wrapped together with wrapping band made of peeled rattan skin. The outer rim consists of a double layer of core for extra strength. The shield is mildly domed, which is the typical form for shields of the 19th century.

The outer face is painted with a stylized tiger face with the character wáng (王) or "king" on its forehead, an often-seen feature when Chinese depict tigers. Colors used are red, black, white, brown and green. The inside of the shield is entirely painted in a vermillion red.

The fact that the shield is painted with a tiger face probably means it was used by imperial troops. Local militia and rebels are usually seen with plain shields without tiger faces.

Condition is usually an issue with such shields, but this example has survived in near-excellent condition with minimal damage and losses. See photos. 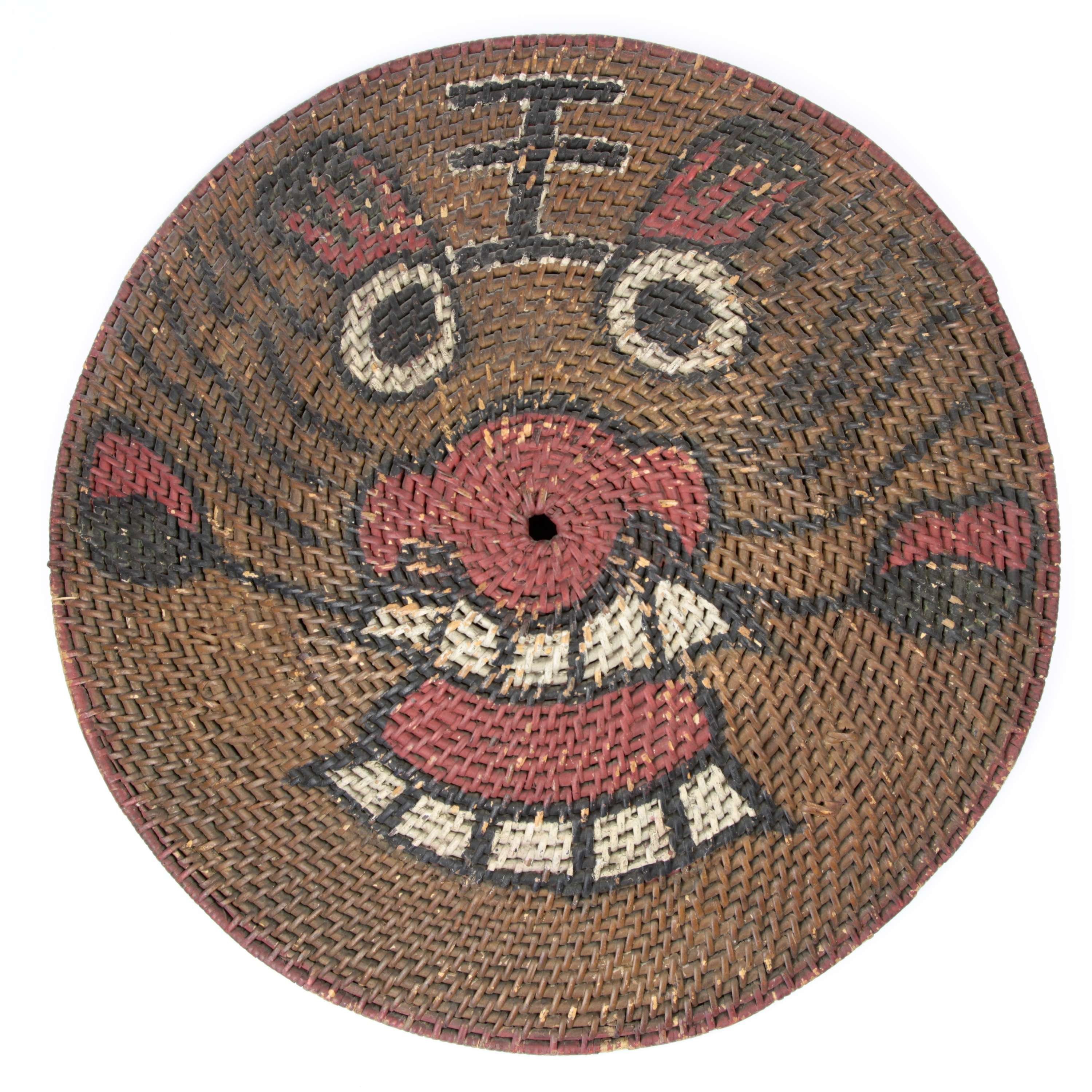 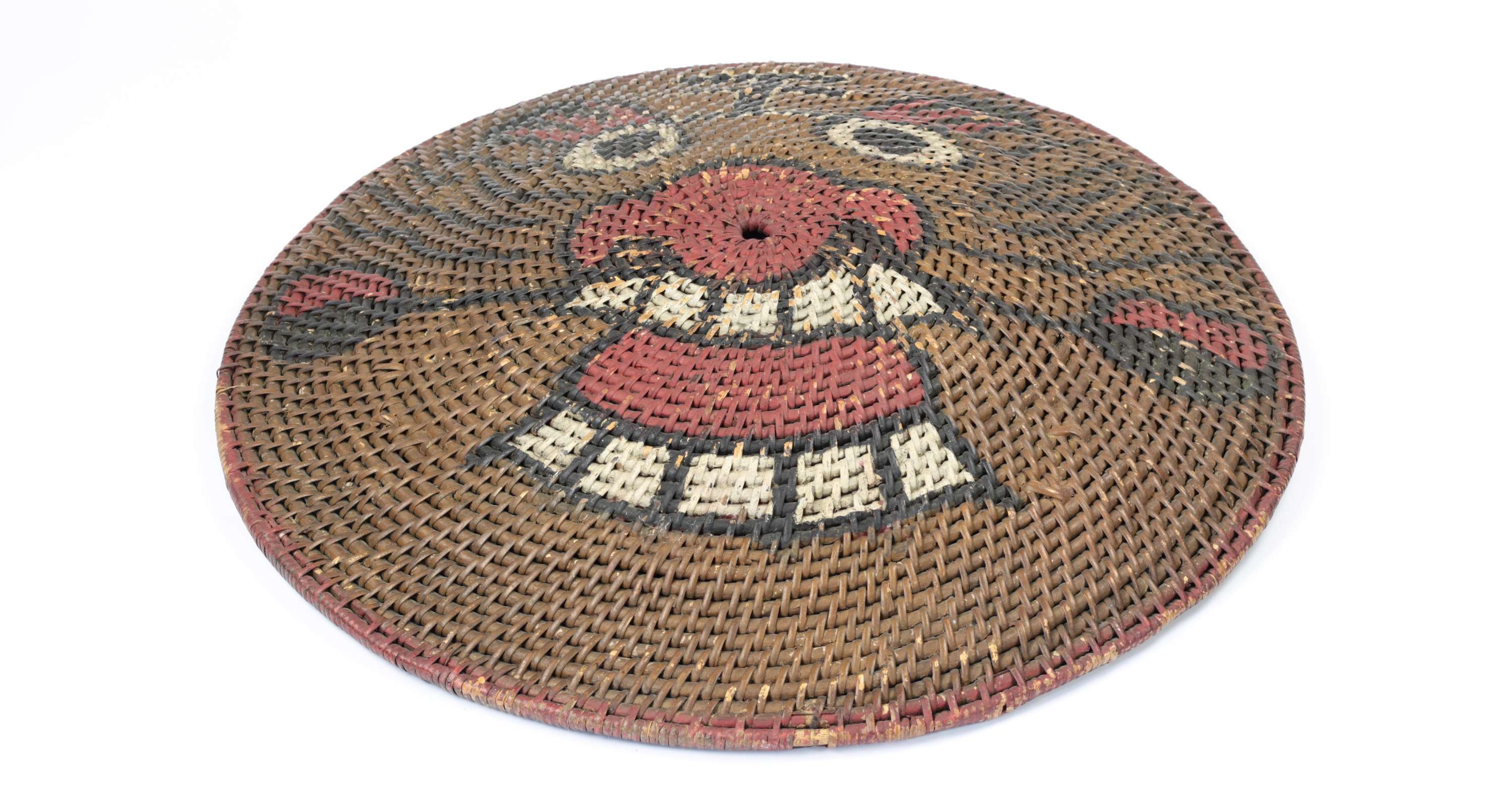 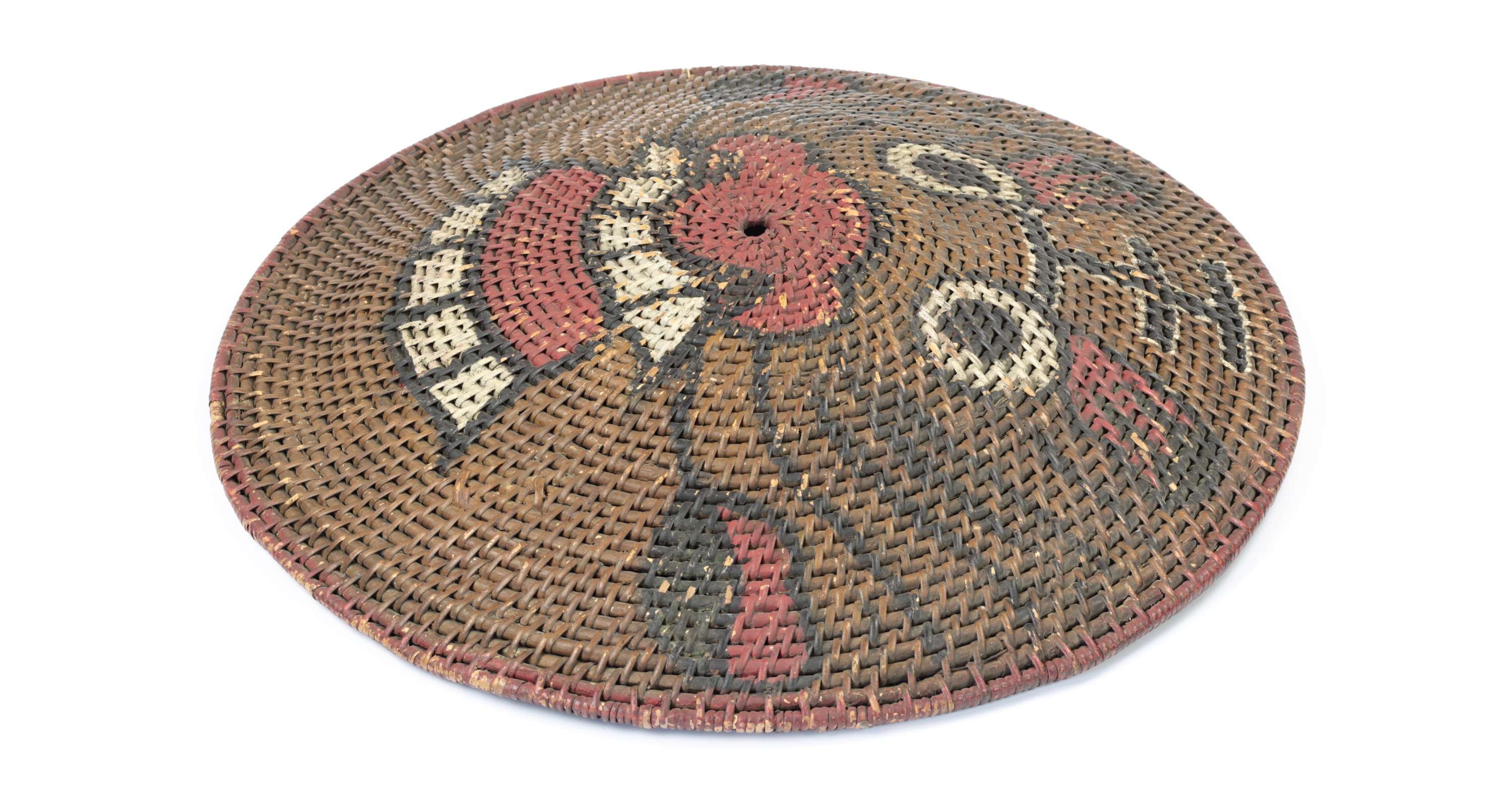 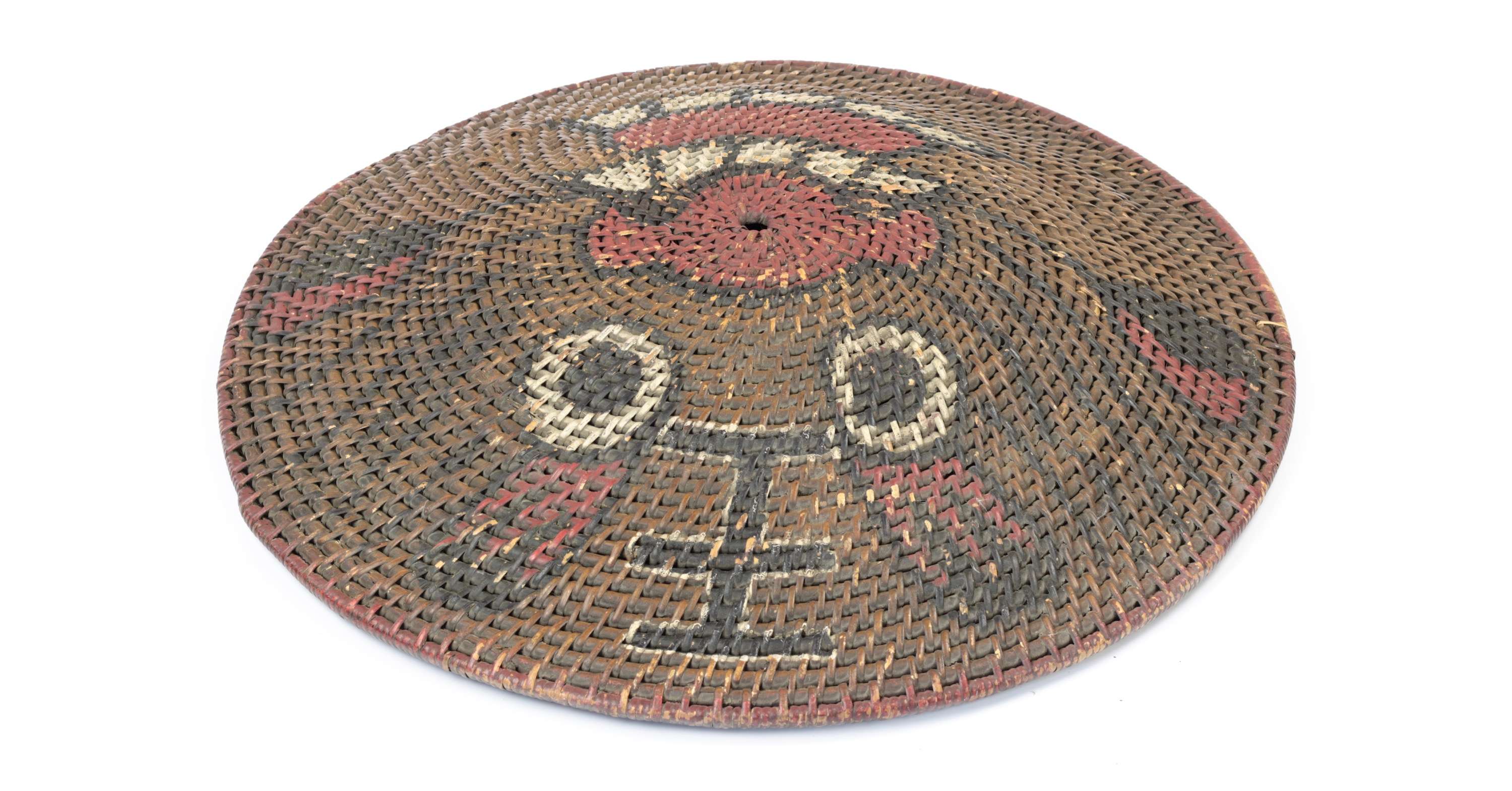 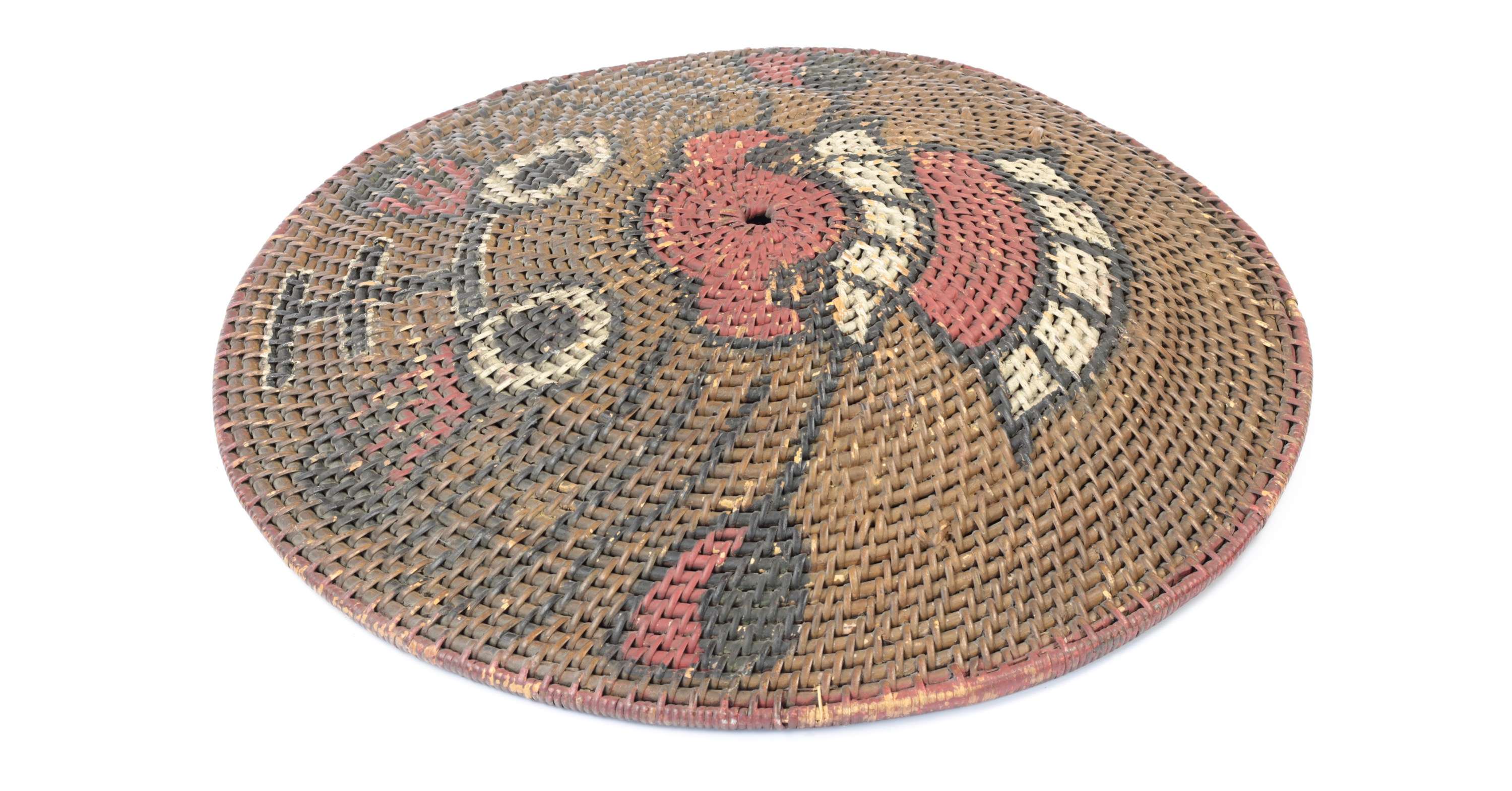 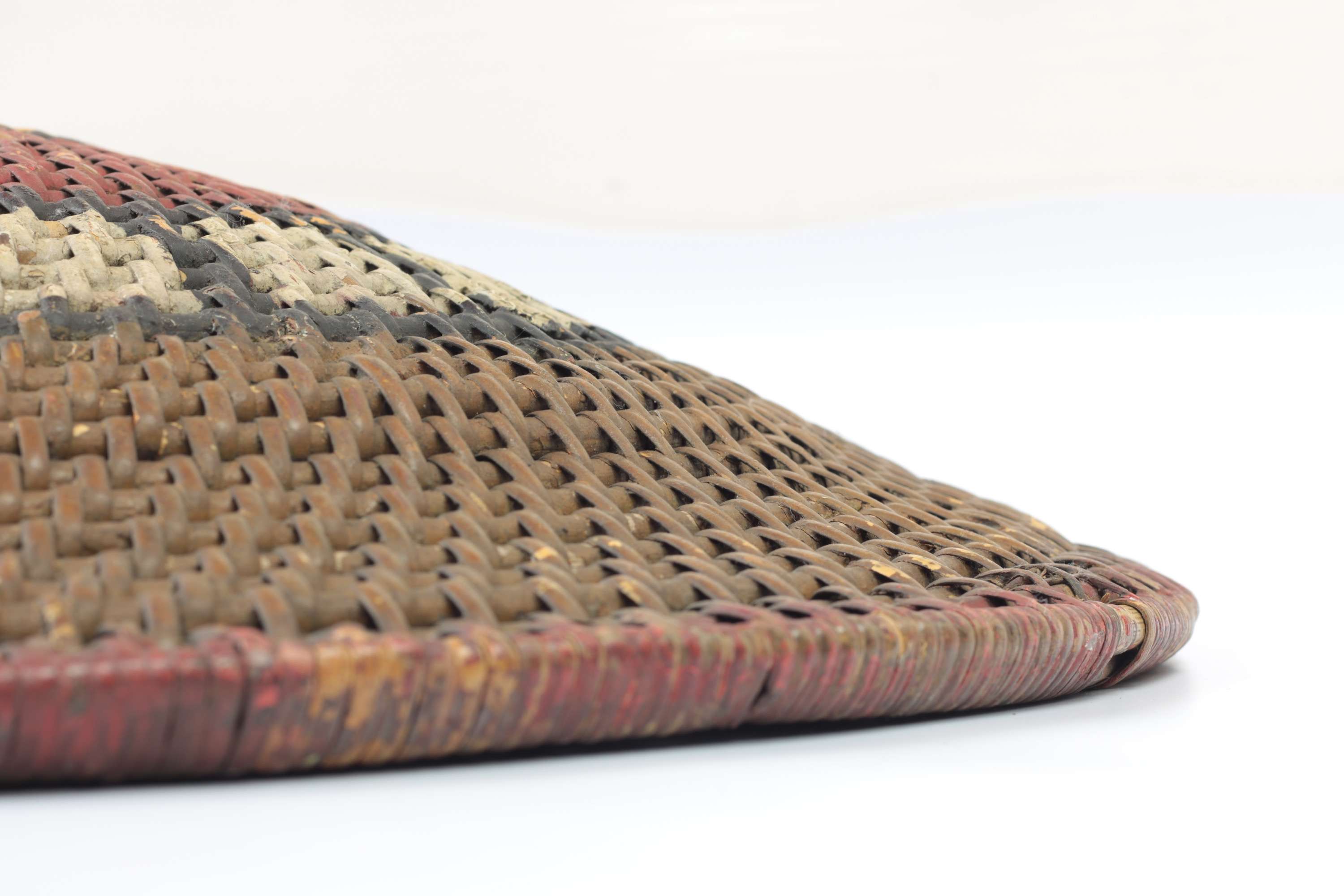 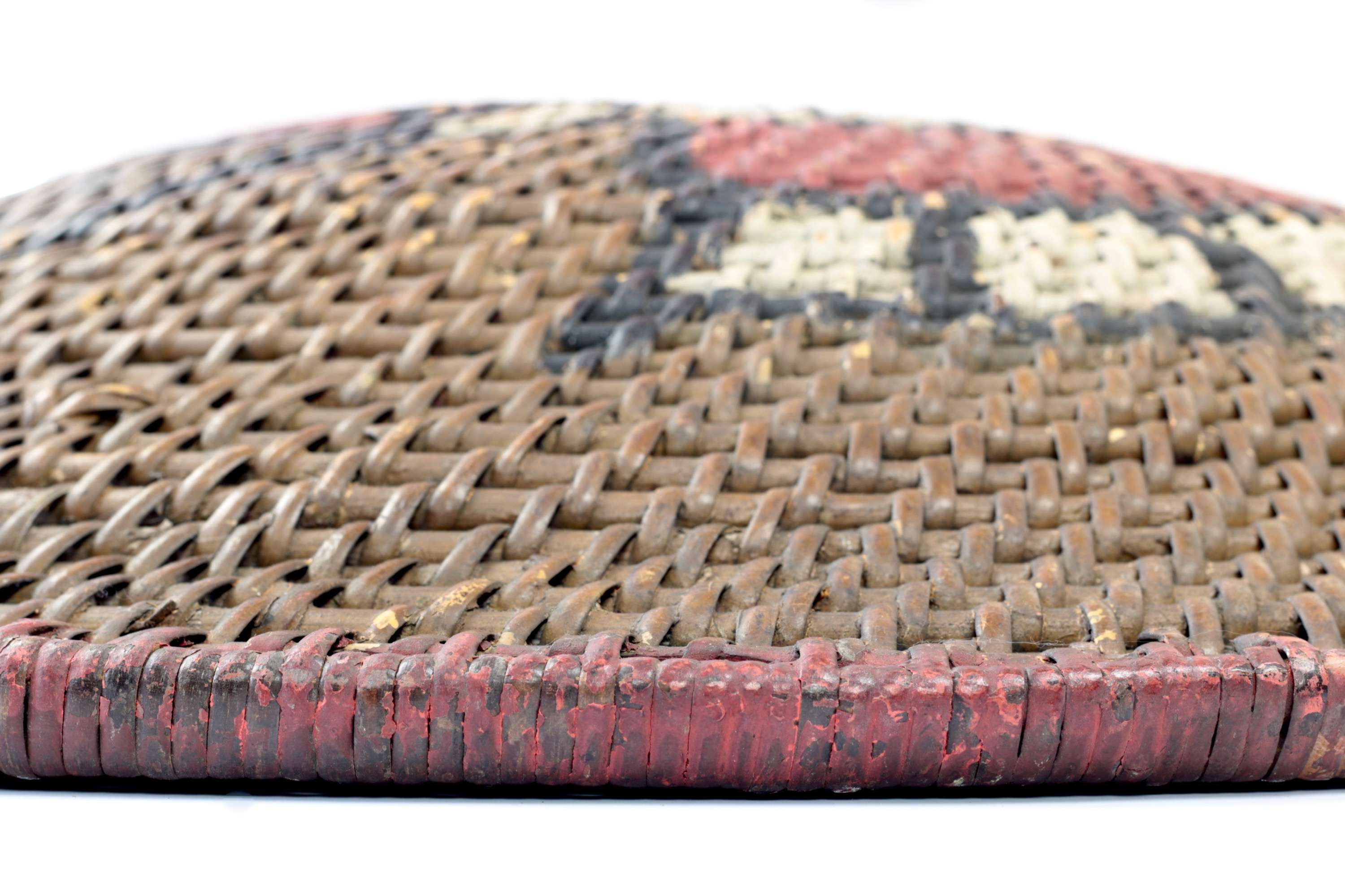 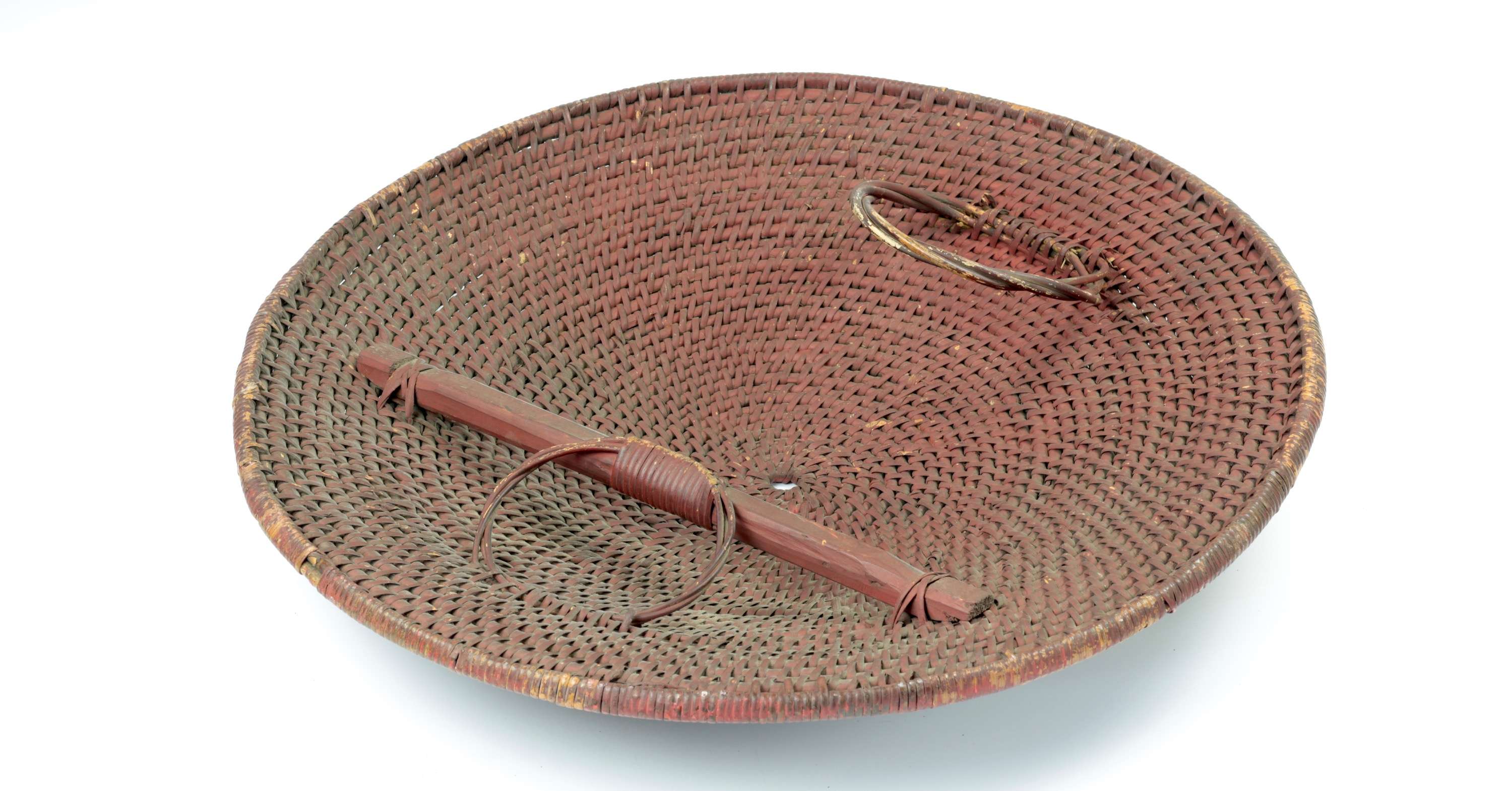 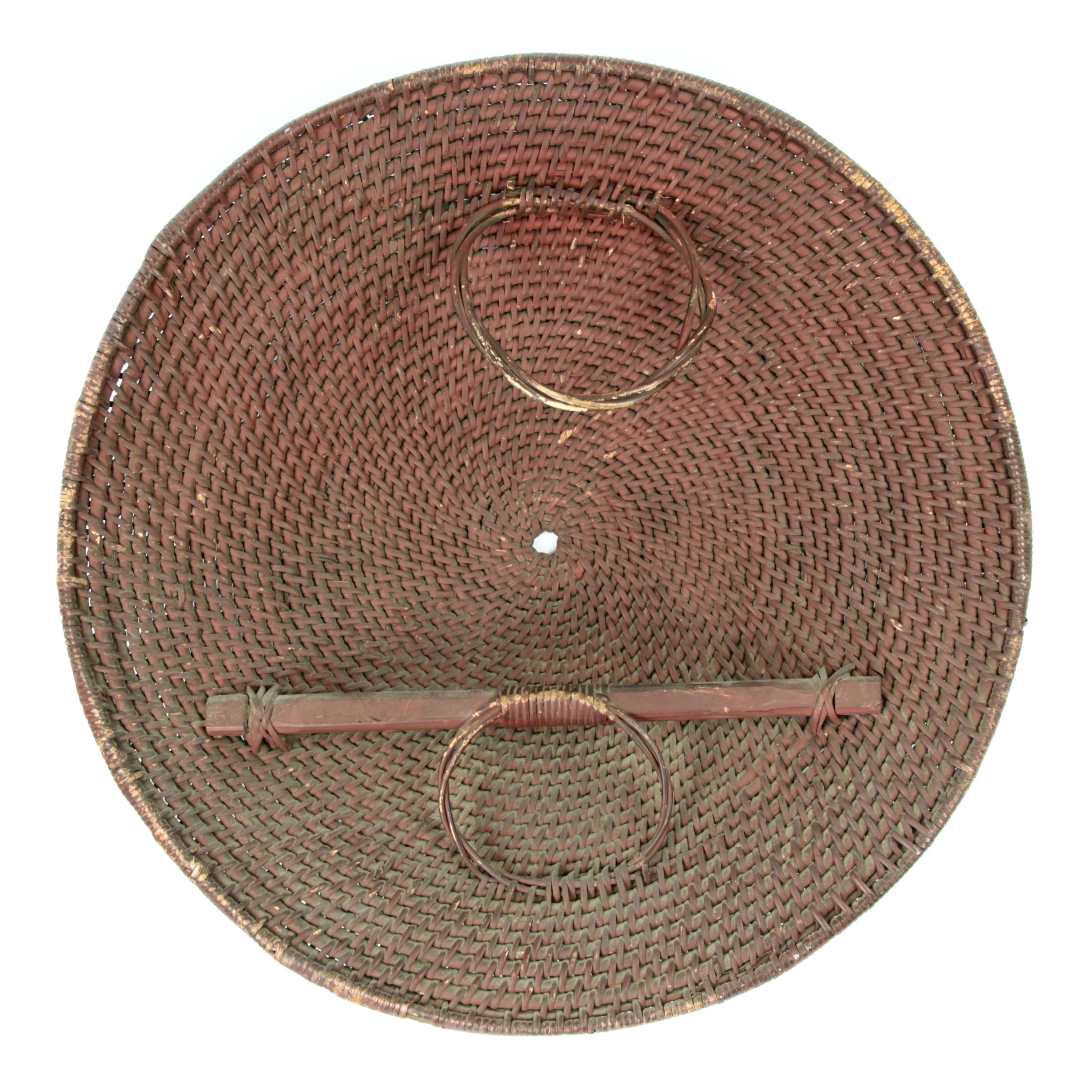