Today I present a very unusual presentation dha that was presented by a Shan minority gentleman from a distinguished family to a British Commissioner of Customs of the Chinese Maritime Customs Service at the trading post in Tengyueh, known today as Téngchōng (腾冲).

Before we continue with its interesting provenance, I will describe the piece itself in detail.

The blade is made of good steel with a somewhat springy temper, and very sharp. It is not polished smooth but instead it is in a "cat scratch" type finish left by a very sharp file. It reminds somewhat of the treatment of some Japanese sword collar pieces, called habaki.

Sword blades produced in Yunnan have been renowned in China and Southeast Asia and by 1907 many dha were manufactured in China and imported into Burma.1 I expect that this is also a pretty good blade, probably forge folded and with a differential heat treatment. I decided against a polish in favor of keeping its original surface finish.

The blade has a typical Southeast Asian profile but with a more strongly accelerated curve at the tip than the typical Burmese dha, resulting in a somewhat stubby tip that excels in cut, not thrust. The blade's spine has a ridged section near the tip.

The most striking feature about the long silver-clad hilt is the large garlic bulb shaped pommel, often found on swords from Yunnan. It is decorated with many decorative bands of fine silver, the main grip section covered with braided silver wire, and a discoid stopper about 1/3rd from the base of the blade. The last section is facetted in cross-section, with ten facets in total. Each facet contains a line in English or Chinese.

The scabbard is entirely silver-clad and decorated with elaborate patterns done in braided silver wires, soldered on the sheet. The work is quite fine. The scabbard's geometry goes from round in cross-section to flattened, with its very tip abruptly flaring in profile.

In pretty good condition, considering how fragile the sheet silver tends to be. Some usual age-related dents and minor losses to the silver at hilt and scabbard. The most obvious damage is at the discoid separator between the upper and lower section of the hilt, it got dented and some of the decorative rings were lost. See photos for a good impression of the amount and extent of damage. Blade in near excellent condition, no distortions, nicks or pitting whatsoever. The scratches are its original surface finish.

Without the inscriptions, this piece would just be a somewhat unusual dha that I would attribute as being roughly from the Burma / Yunnan border regions. Luckily this piece carries an inscription that provides a time, a place, a giver, and a receiver. A best-case scenario for the context-aware collector. It makes the piece a helpful reference piece that can be used to date and attribute others as well. 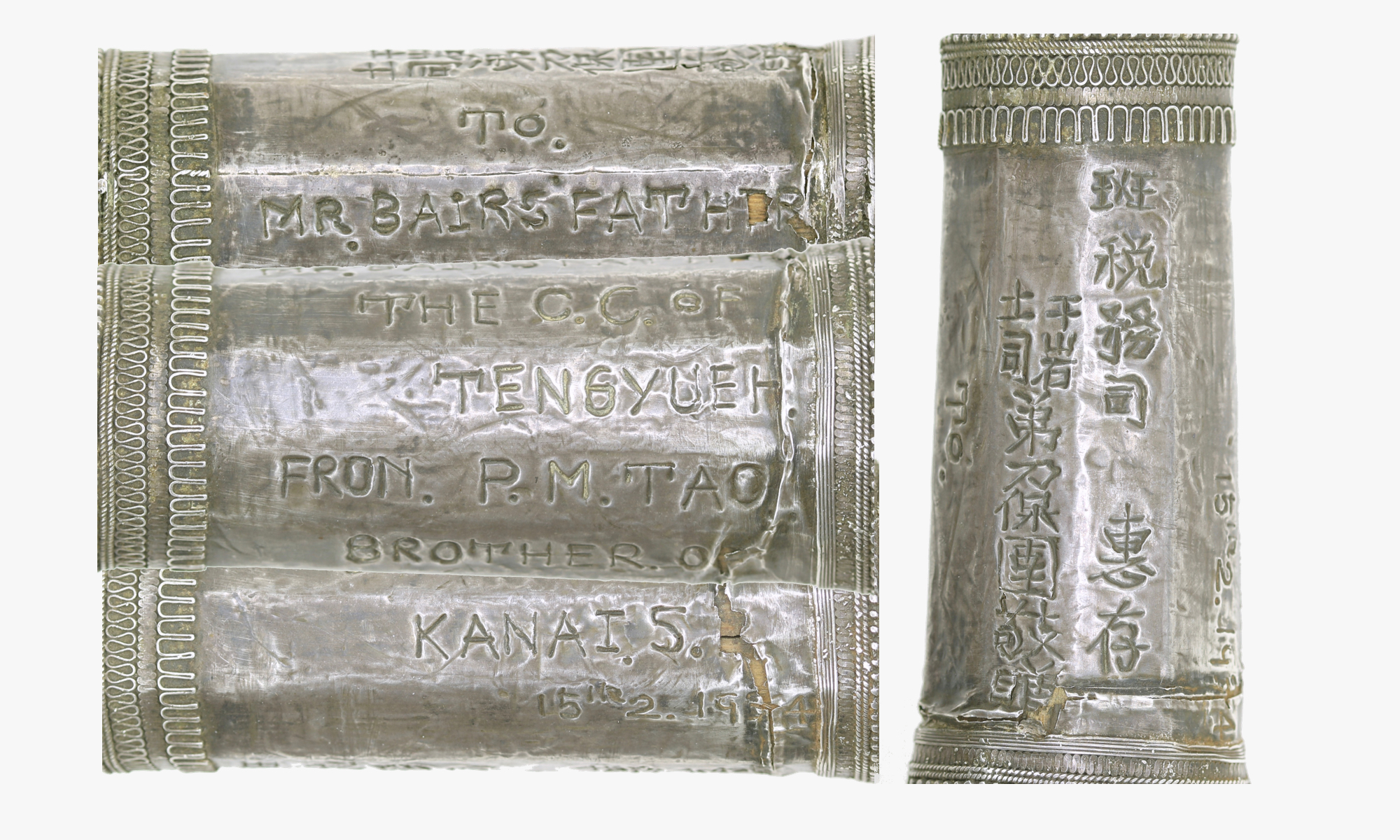 A collage of photos showing the markings in their entirety.

Interpretation of the inscription

The English and the Chinese inscriptions are fairly similar but not identical and provide context to each other.

The receiver Mr. Bairnsfather turns up in historical records and indeed served -among others- as the Custom's Commissioner at the British consulate in Tengyueh. (Notice the craftsman omitted an n.) There may have been an additional letter behind "Kanai S.", possibly an R.

The Chinese inscription provides more clarity on who P.M. Tao and Kanai. S. are.

干岩土司 (Gànyán tǔsī): "Ganyan Chieftain". The word for chieftain used is Tusi, hereditary tribal leaders recognized as officials to the Chinese government. Ganyan literally means "dry rock" and is the name of the area this Tusi presided over.

He served among others in Canton, Leizhou, and Nanjing. He was stationed in Tengyueh as an assistant-in-charge from 31 March 1932 to 31 March 1934. This puts the presentation of the sword at two weeks before the end of his tenure in Tengyueh. In 1941 he returned to Tengyueh, now called Tengchung, as a Commissioner of Customs.2

Tengyueh was a trading post near the border with Burma, with two mountain passes leading up to it. It dealt mainly with the import of cotton into China, and silk going out of China.

The staff was forced to evacuate the building when the Japanese took the city in 1942, although the building is still there the British were never to return to the site.

Mr. Bairnsfather was mentioned in passing by traveler Alfred Kramm who hinted at being stationed temporarily in Tengyueh:

"I didn't want to change money at a Chinese bank as I was afraid of a bad exchange so I stopped at the customs house to ask where there was a European bank. Here I met Mr. R. Bairnsfather, Assistant Customs Commissions, who had Mr. Gardener's place in Tengyueh just prior to the coming of Mr. Gardener. He knew both Olsen and Gardener so we chatted for a few minutes." 3

Not a lot is known about Dāo Bǎoyǔ personally, but he is from a famous family of local nobility of the Dai ethnic minority, also known as "Chinese Shan". The firstborn males of Dāo Bǎoyǔ's family have served as Tusi, local lords, for many generations, going back to at least the Ming dynasty.

His older brother of Dāo Jīngbǎn (刀京版, 1898-1966) a.k.a. Dāo Bǎotú (刀保图) served as the 23th generation Tusi of Ganyan in the westernmost part of Yunnan, along the trade route leading from Burma to Tengyueh. It is interesting that on the dha his English name is given as Kanai S, possibly a romanization of his name in the Dai language.

"Should point out that "kanai" is the local pronunciation of 干岩, and that "S" probably stands for "sabwa" – Dai word for tusi. This would make it an exact match for the Chinese inscription, 干岩土司."

Their father was no less Dāo Ānrén (刀安仁, 1872-1911), a Yunnan hero and patriot who was the 22th generation Tusi of Ganyan. In his youth, he already repeatedly called upon the people from various local ethnic groups to fight against the British. During a trip to Japan, he became an early member of the "Chinese Revolutionary League" (同盟會) that was formed there under the lead of Sun Yat-sen. Upon his return, he started working on reforms and united the local Tusi for the revolutionary cause. On September 6, 1911, he launched the Tengyue Uprising against the Qing imperial government.

After the Revolution of 1911 and the subsequent fall of the Qing, Dāo Ānrén was arrested by the new Republic of China led by Yuan Shikai but was soon released and appointed military counselor. He passed away in Beijing in spring 1913. Now considered a hero of the 1911 uprisings, his former mansion is still a tourist attraction and in 2016 a special opera was dedicated to his story.4 His story is notable because he was a nobleman that rebelled against the very system that granted him nobility, and fought for what he believed to be a more fair treatment of the commoner.

Dāo Jīngbǎn, older brother of the presenter of this dha, had a similarly notable career. He served as Tusi from 1929 to 1941, after which Dāo Jīngbǎn called Dāo Wēibó (刀威伯, 1917-1985) would become the 24th and last Tusi of Ganyan.

When in 1937 the Second Sino-Japanese war broke out, Dāo Jīngbǎn worked with the Kuomintang and the Communist Party in a cooperated effort to build the Burma Road, a long route through difficult terrain that was to provide important military supplies into China for the war effort.

In 1942 the Japanese invaded Tengyueh and Dāo Jīngbǎn organized the "China-Burma Volunteers" to fight back. He was appointed the commander of the so-called Self Defense Forces in the western border region and carried out anti-Japanese guerrilla activities in Yingjiang and Lianshan.

In April 1950, he peacefully submitted to the Chinese People's Liberation Army and served in the National People's Congress Ethnic Affairs Committee to represent the different people of Yunnan.5

It is not known what Dāo Bǎoyǔ's role was in all of this, and why it was him who presented the dha to Mr Bairnsfather. As local nobility that ruled over part of the trade route from Tengyueh into Burma, the Dao family may have been involved in the trade as well.

Age of the dha

Usually, when swords are inscribed with a date, it is a pretty good indication of when they are produced. But, sometimes we should take a date as an "at least before". Going through some of the old catalogs by famous London based dealer W.O. Oldman, I found two very similar dha offered by him in his March 1906 catalog:

Special thanks to David Leffman, author of the Mercenary Mandarin for digging into his Tengyueh notes for me.
Also Lancelot Ying Chih Chan, Cheung Man Kit, Jarek Szymanski, David Qixiang Chen, Keith Seeley and Brian Kirbis for generously helping with the Chinese in reaction to a Facebook post. 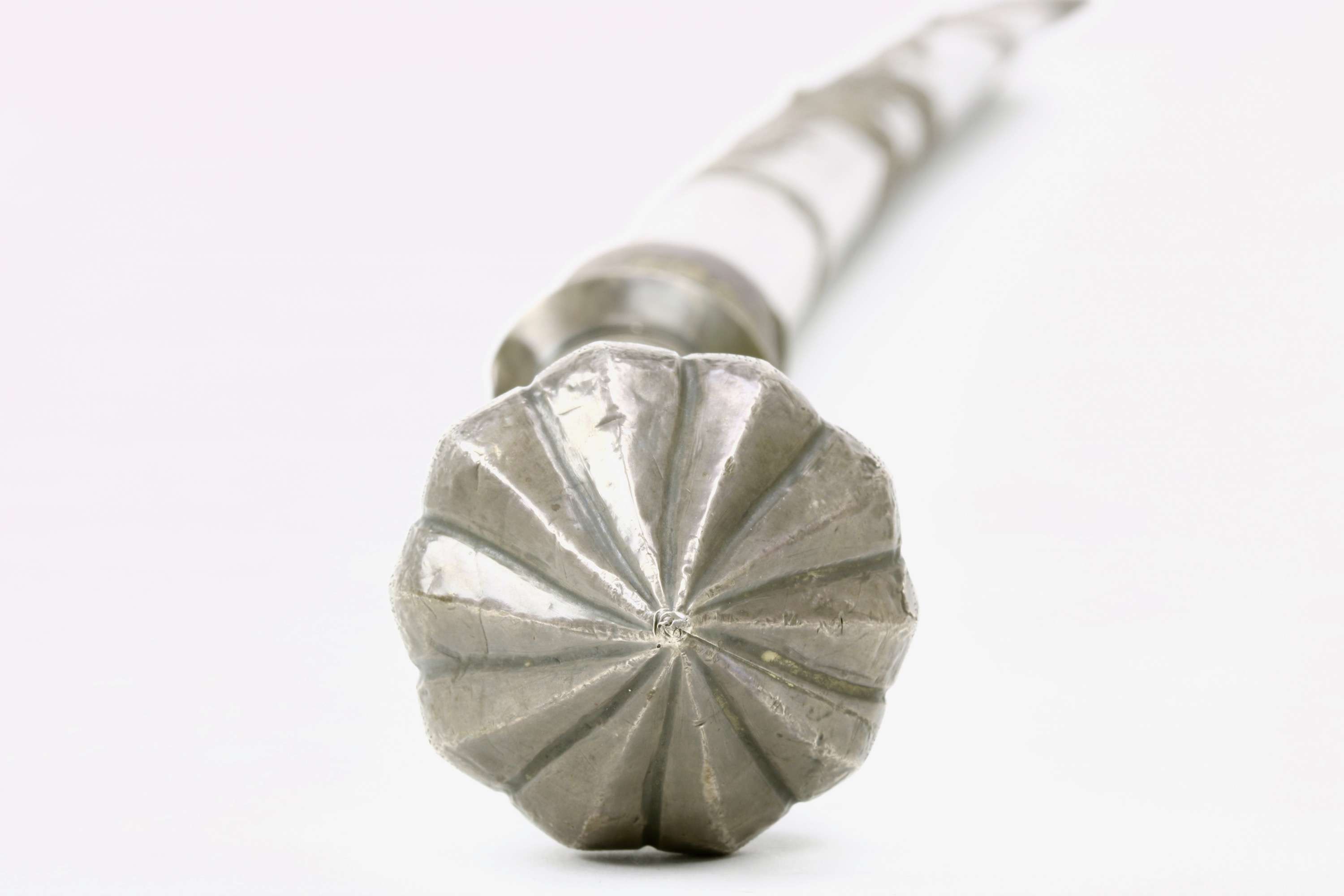