The yaodao, literally "waist-worn saber", was the sidearm of the officers and soldiers of the Qing dynasty.1 Most ranks got a certain amount of silver to purchase and maintain their own equipment. For some officers, these amounts went up to 20 taels.2. There were regulations for size, materials, decoration, and colors of scabbard and wrap, to which weapons for official assemblies had to apply. Some officers would have had more than one saber, so not all sabers are official regulation pattern types. Also, the choice of blade was largely free, as long as it had a certain size. Because of this, they tend to exhibit great variation in style.3

A very nice Chinese saber with an early 18th century blade with some very rare and interesting features. Of liuyedao form, the gently curved blade has a complex configuration of grooves and inlays. There is a main groove running over the middle of the blade that fades into the tip. A second groove, in segments, is running on the dorsal side of the blade. Eight segments in total, with between each segment one of the Eight Trigrams of the I-Ching, the "Classic of Changes", an ancient Chinese work of divination.

Between the center groove and the dorsal segmented line of grooves, running almost the entire length of the saber, is a long inlay of brass and copper. The metals are joined by twisting them together and grinding them to reveal the twisted core. It's a unique feature that I've never seen before. The tip has a false backedge with another groove inside it, a feature found on some sabers of the 17th and 18th century.

The blade is of inserted high-carbon steel construction with dramatic shuangxue, the cloudy effect caused by its heat treatment known in Japan as "hamon".

It comes mounted in a complete set of brass fittings of angular style, cast and subsequently brought to detail with drilling and chiseling. The fittings are probably several decades later than the blade, probably early 19th century. These fittings are later versions of the typical 17th-century openwork encountered on a number of sabers, the most famous of which that of early Qing emperor Hong Taiji himself who lived from 1592-1643. His sword, in turn, was based on Tibetan ironwork that came to the Manchus through the silk road trade, often as tribute by Mongol tribes that sought an alliance to the Manchus.

Scabbard body and handle were replaced by Philip Tom. In polish, also by Philip Tom. Blade in superb condition, no nicks or cracks. Some losses to the trigram inlays, as pictured.

An extremely rare Chinese saber with a complex blade with segmented grooves and a unique copper/brass twisted rod inlay. Its fittings are a later interpretation of the Tibetan openwork fittings on the saber of Hong Taiji. The blade quality is superb and remains in excellent condition. 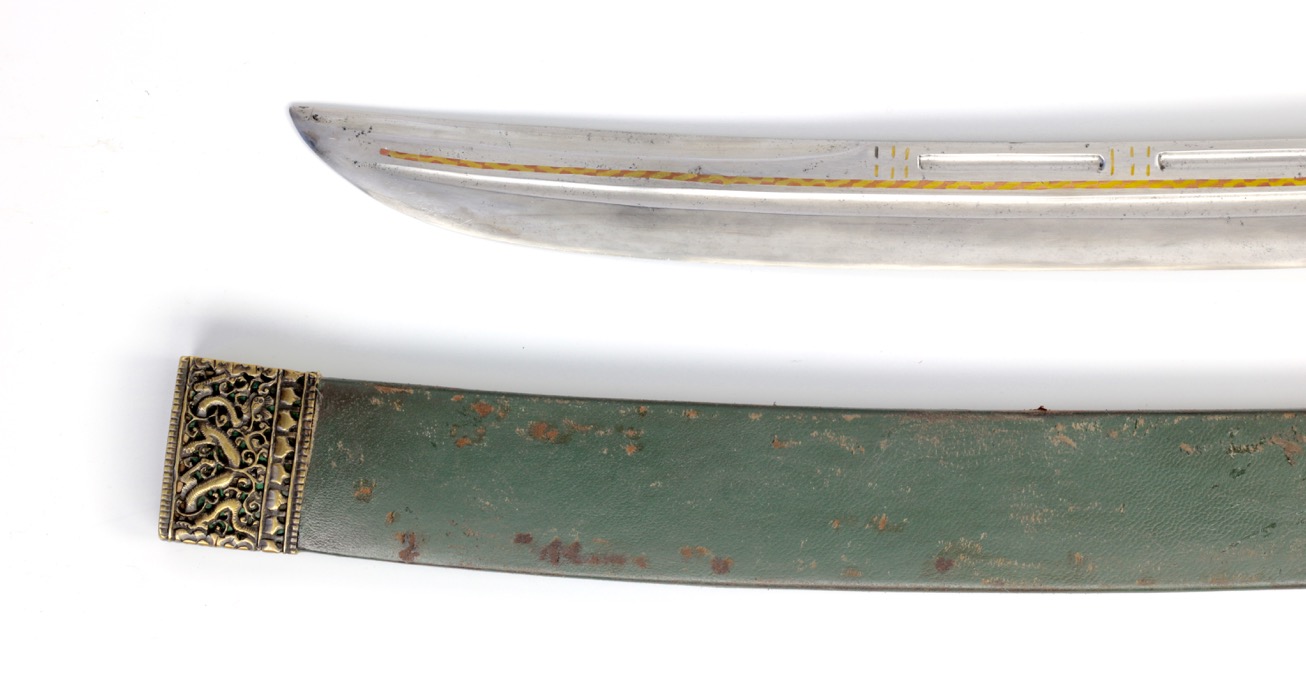 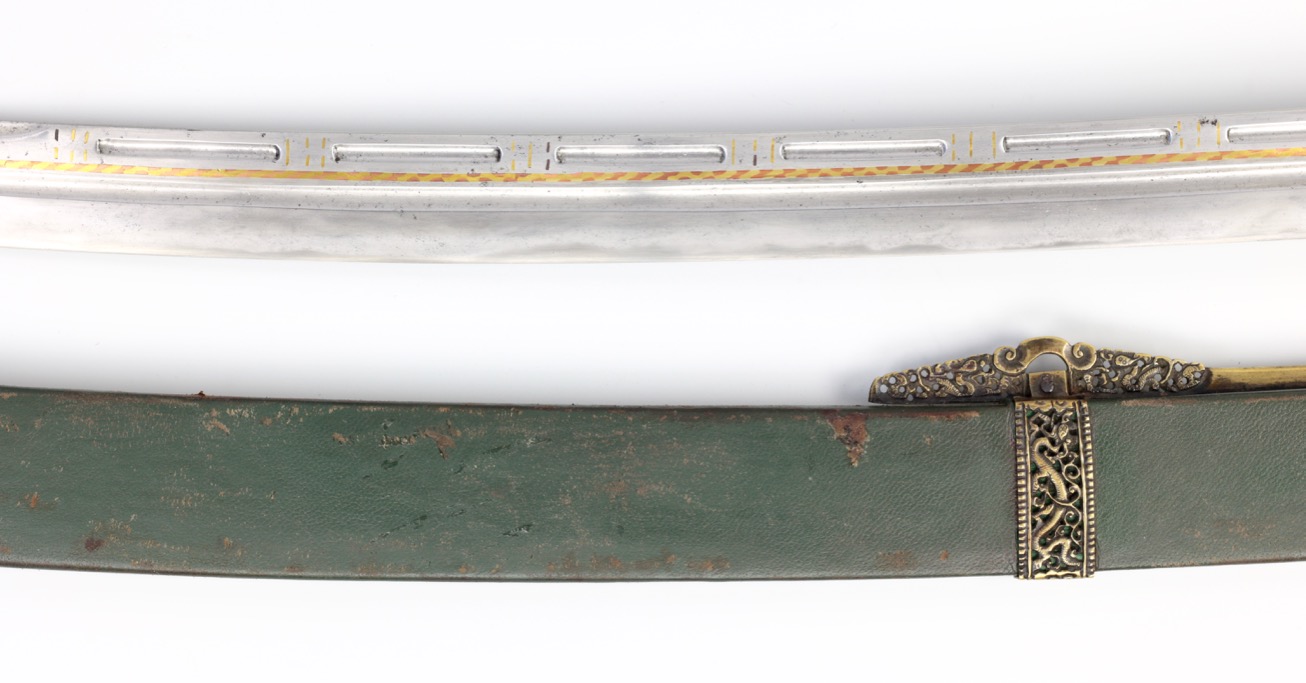 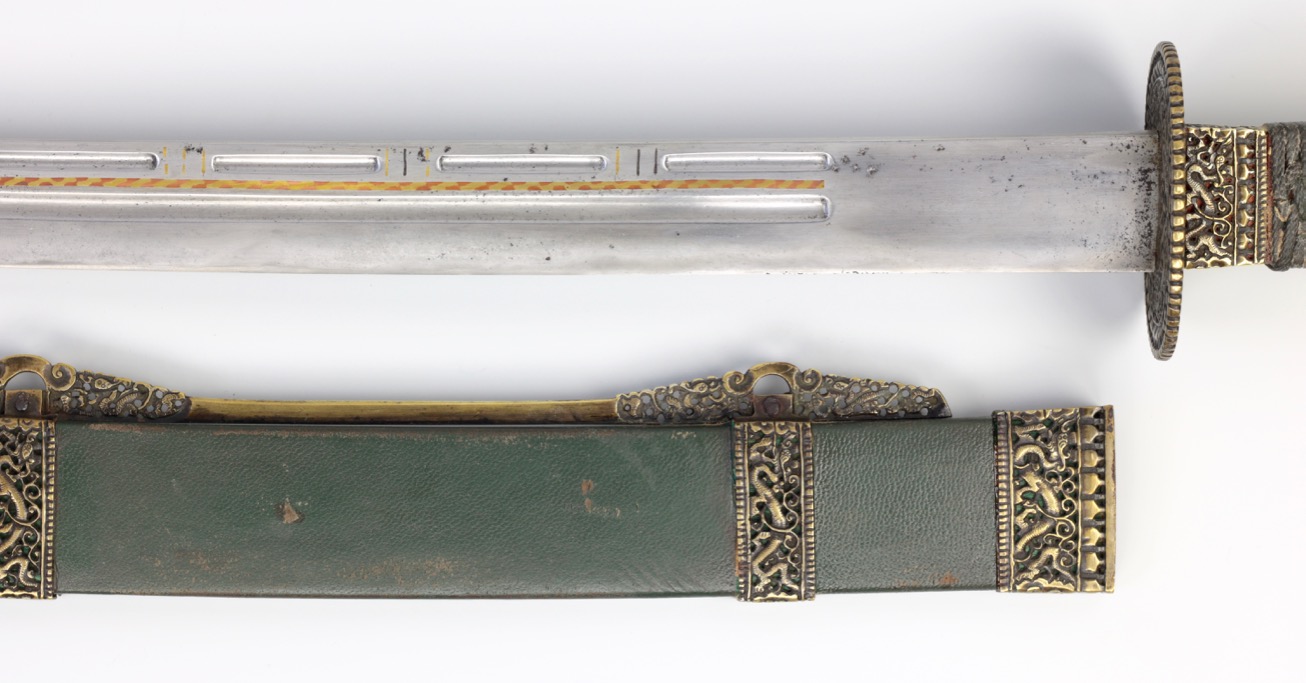 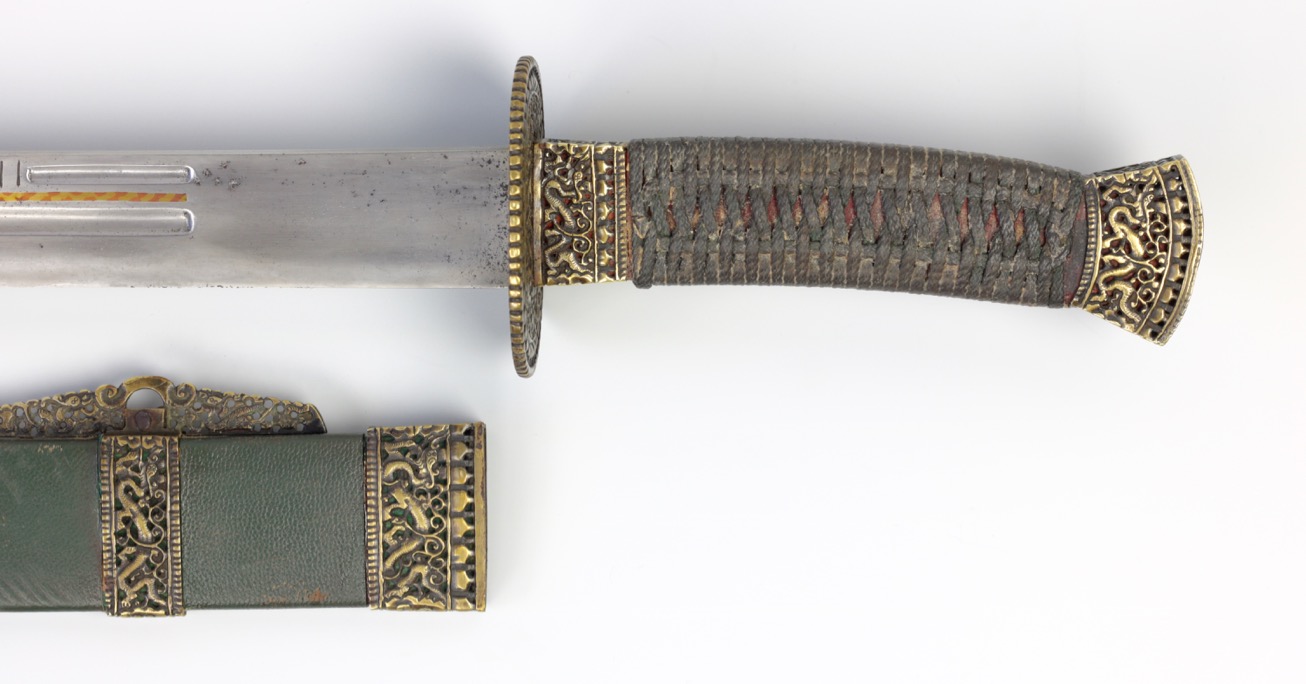 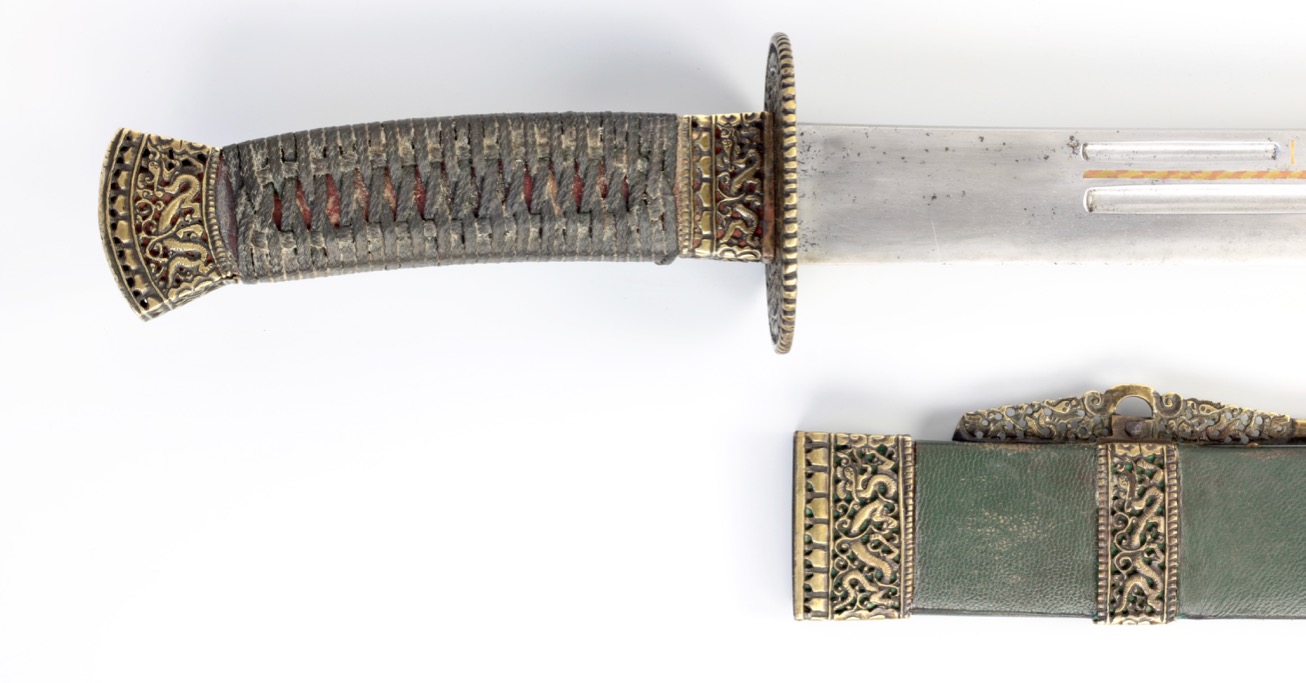 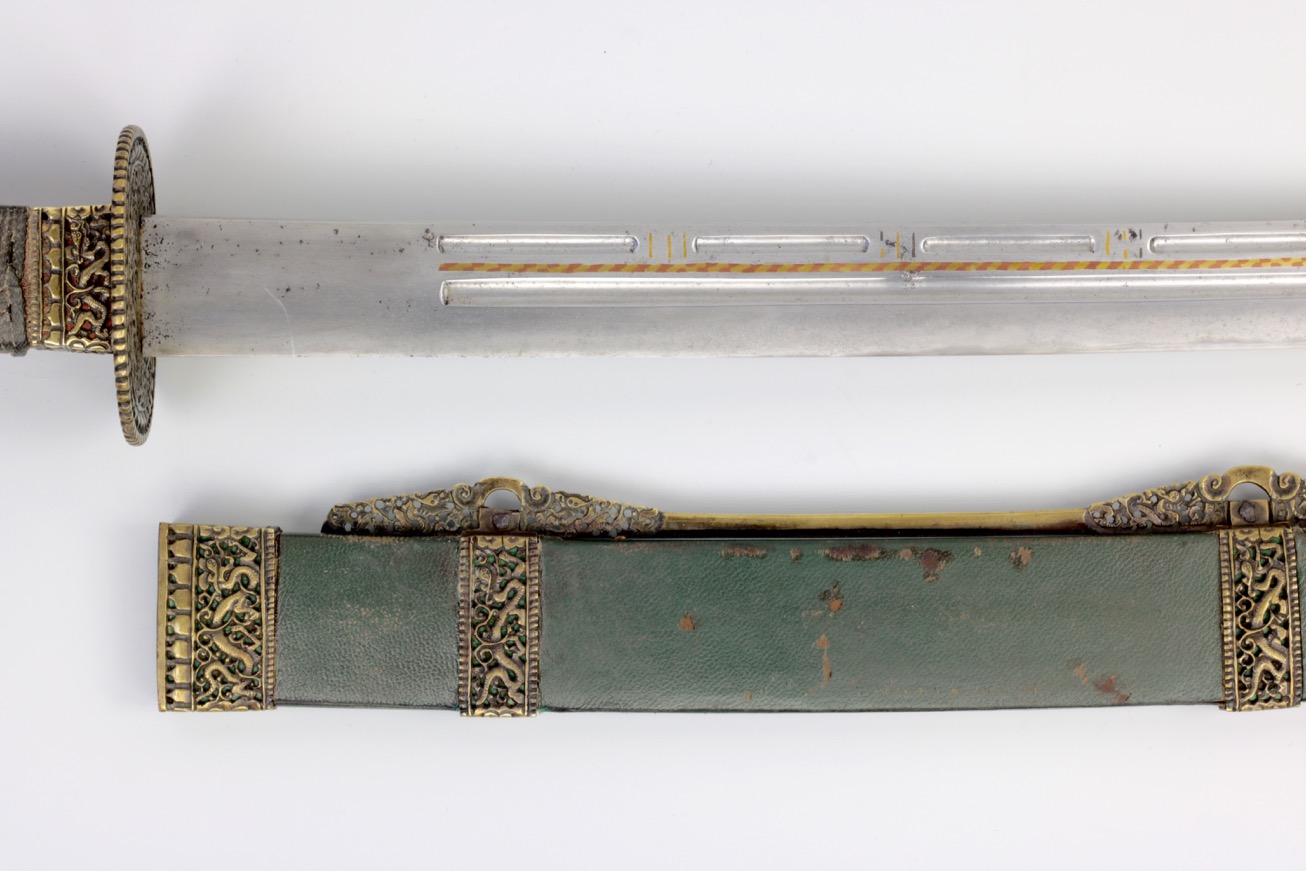 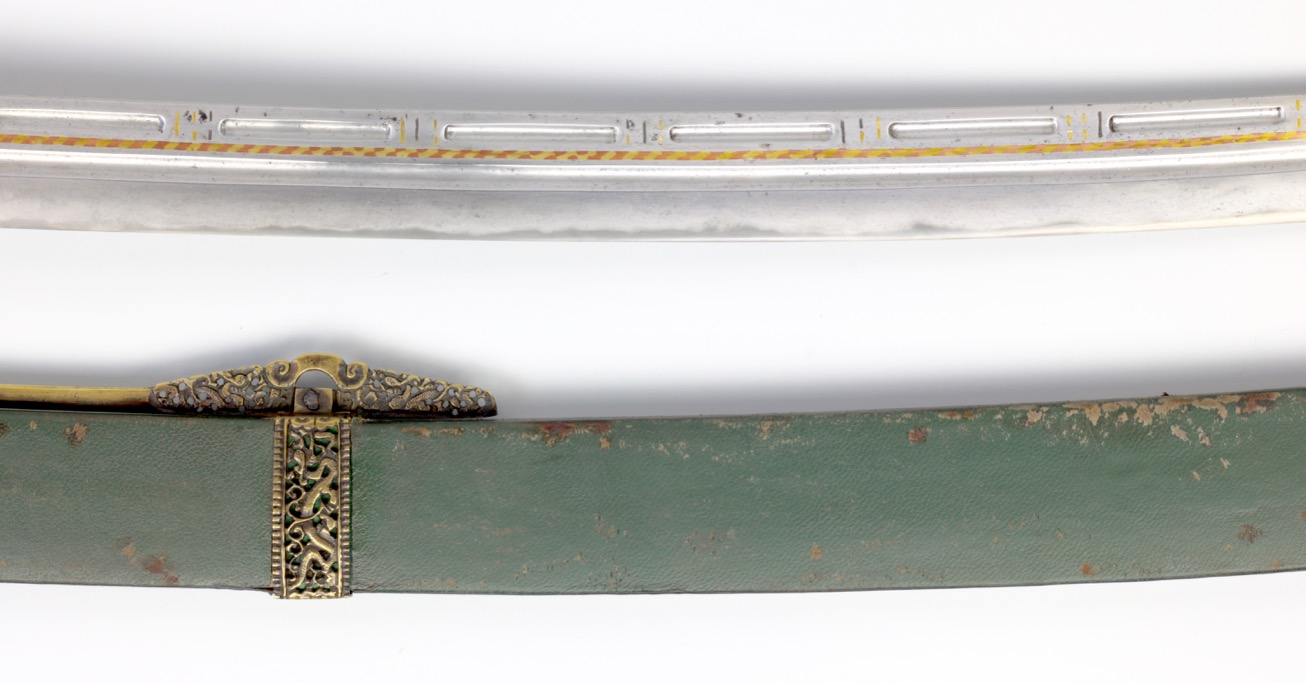 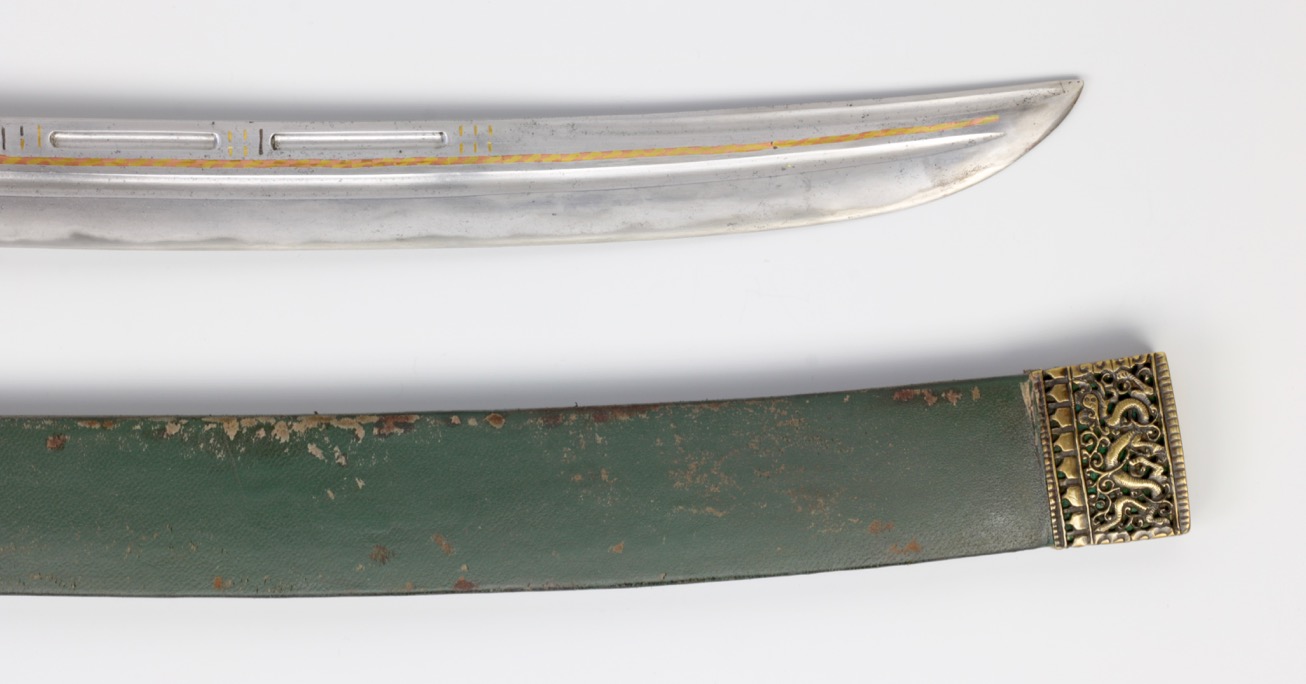 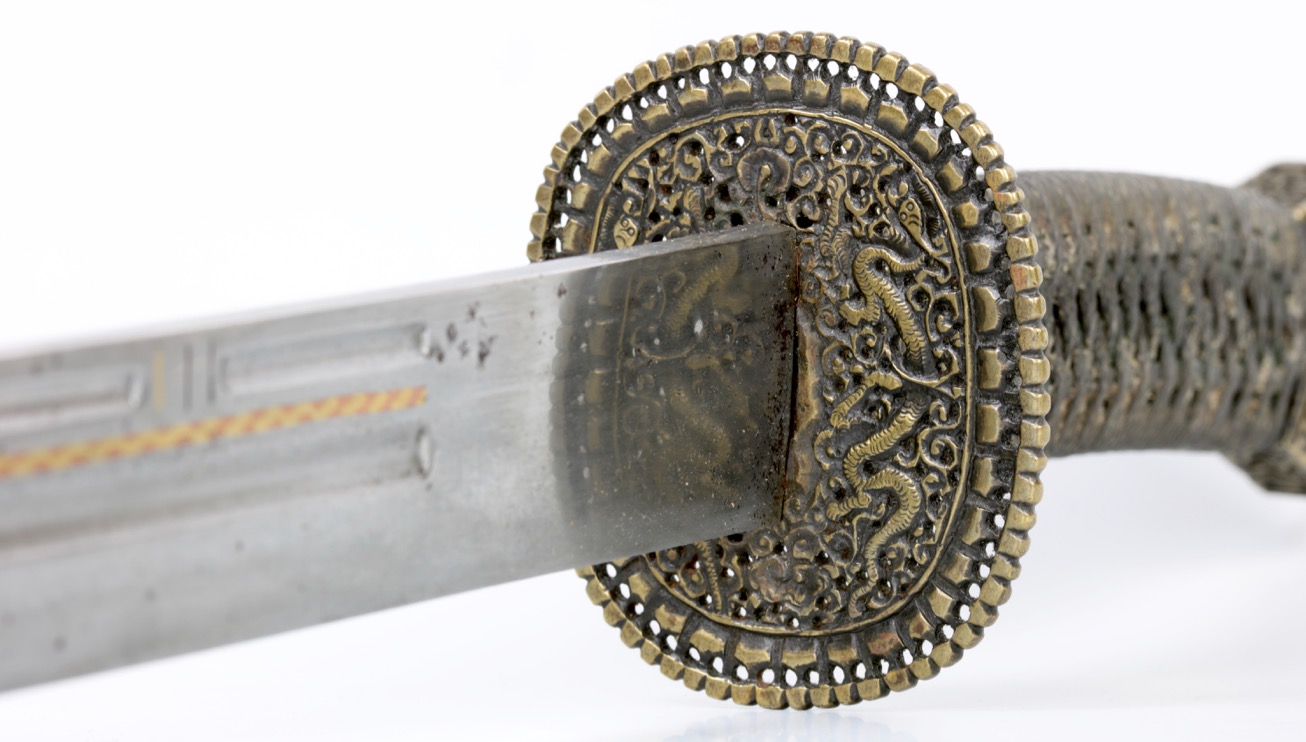 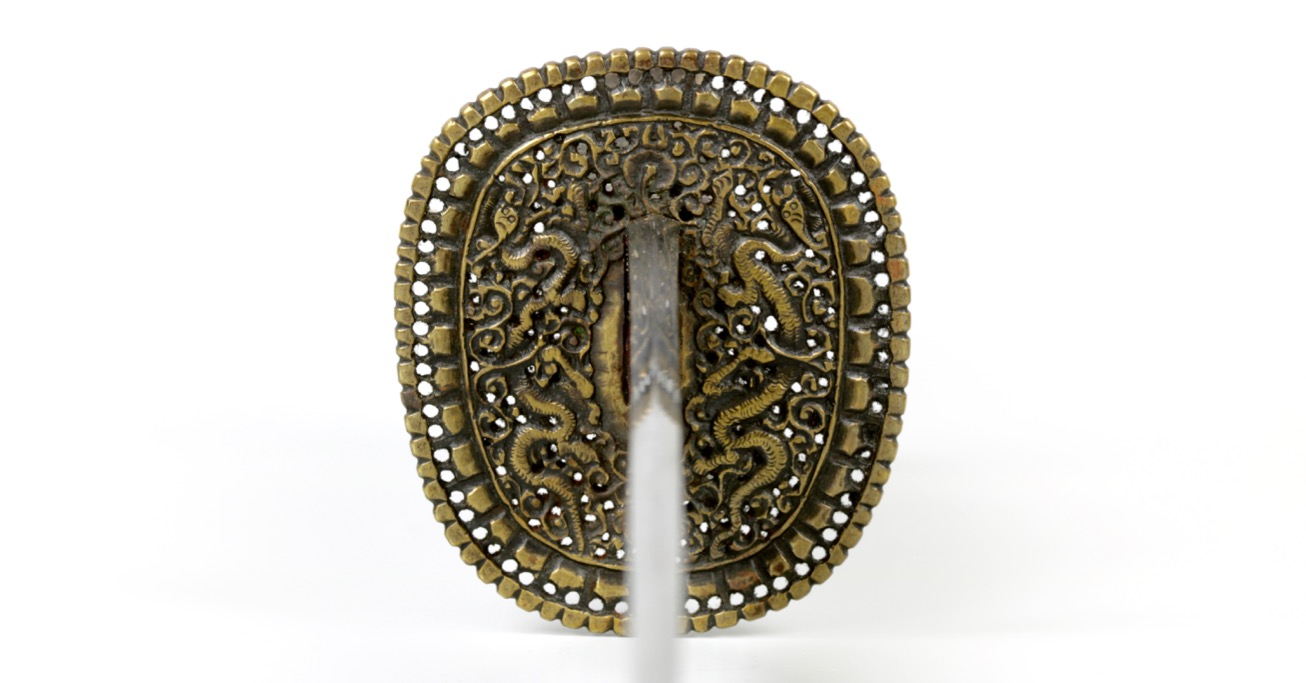 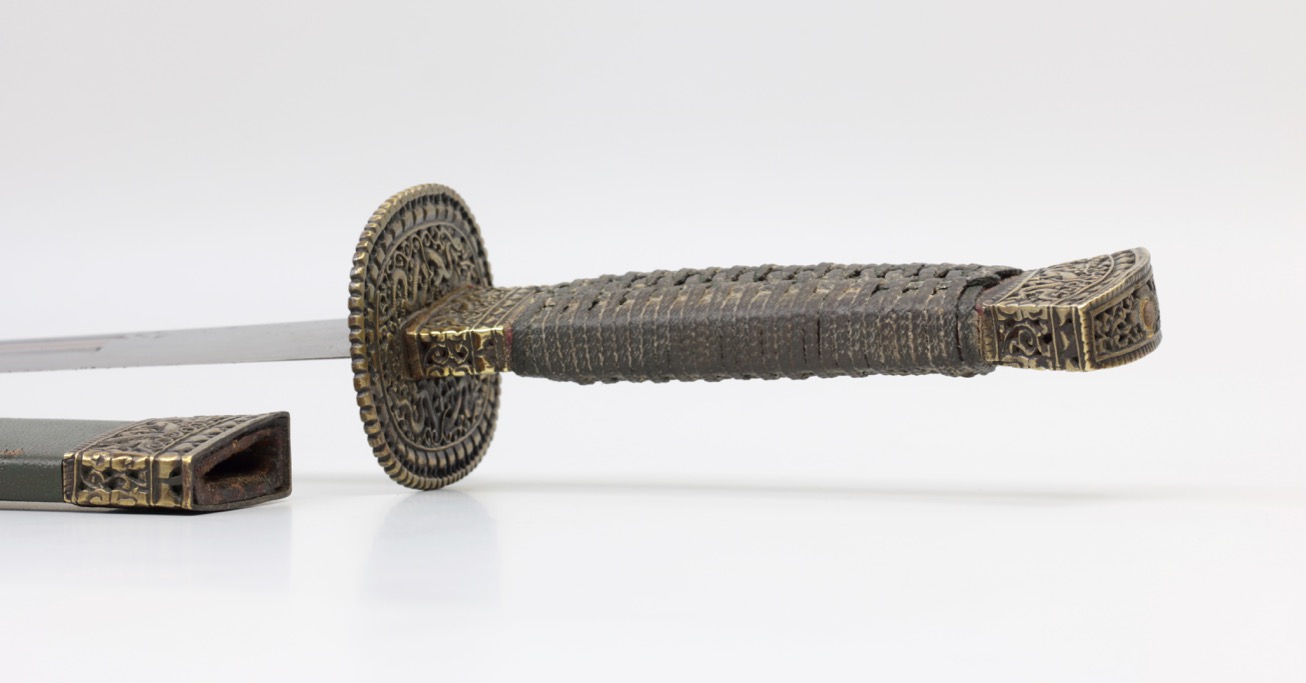 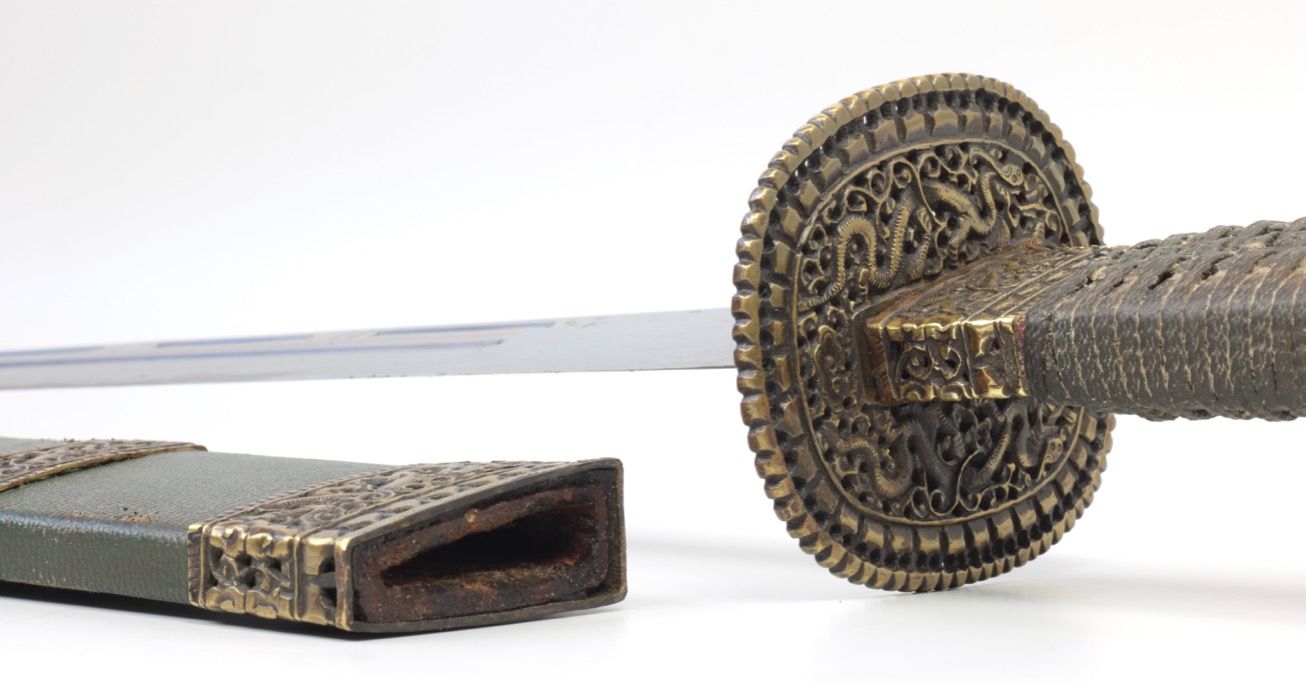 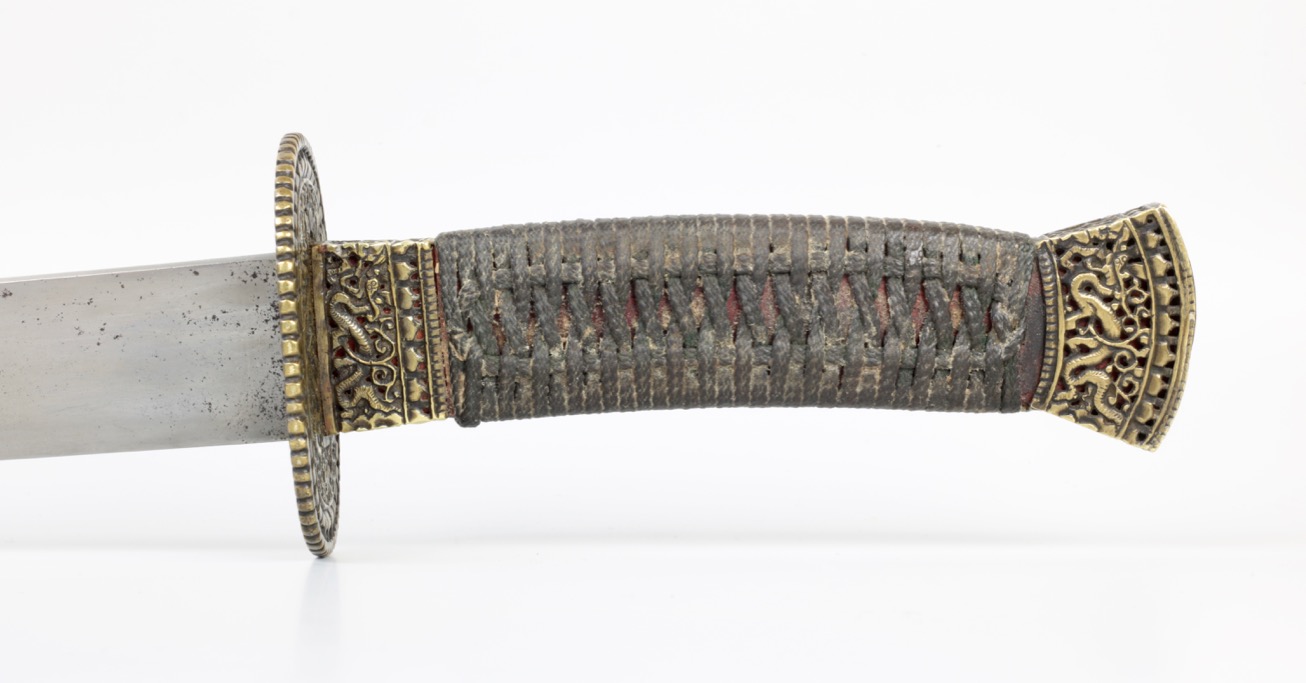 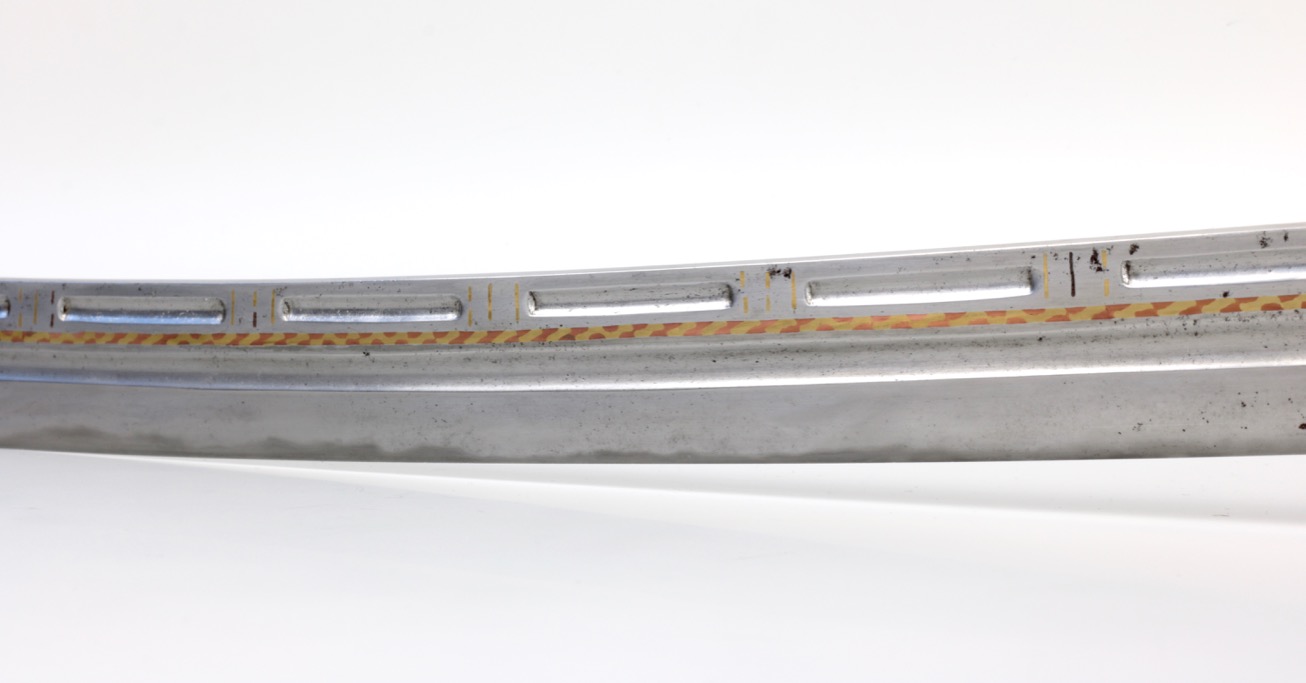 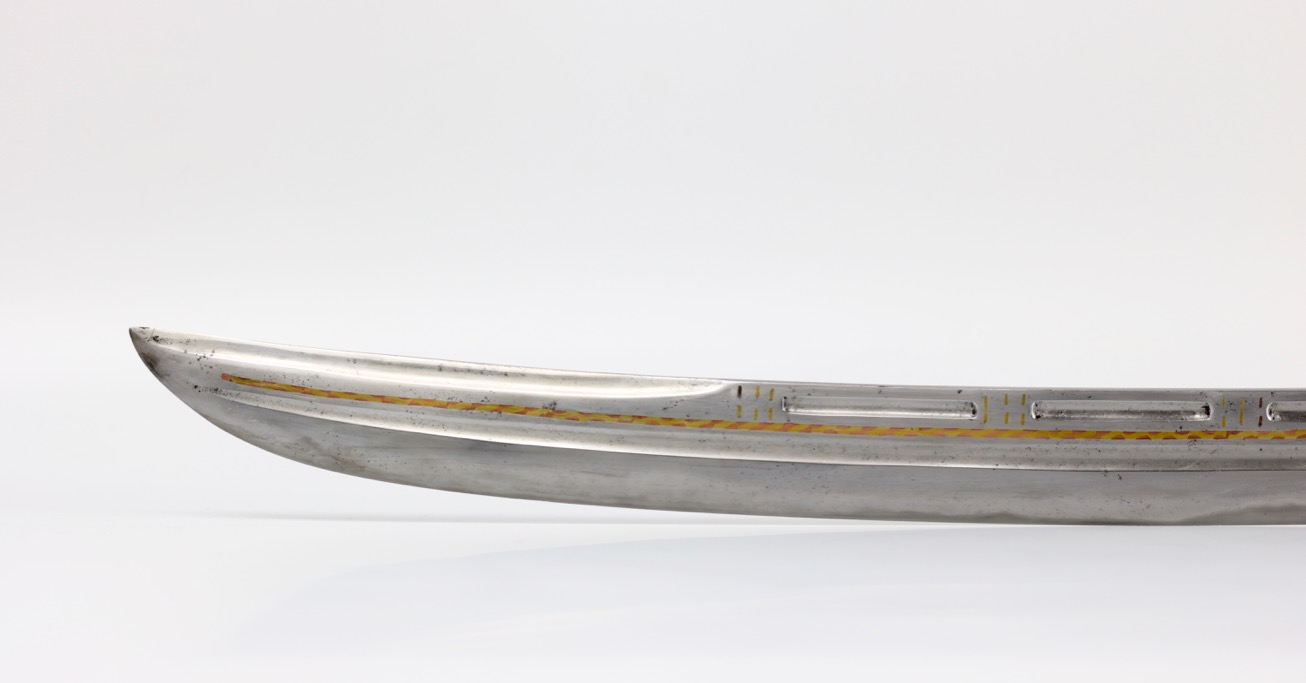 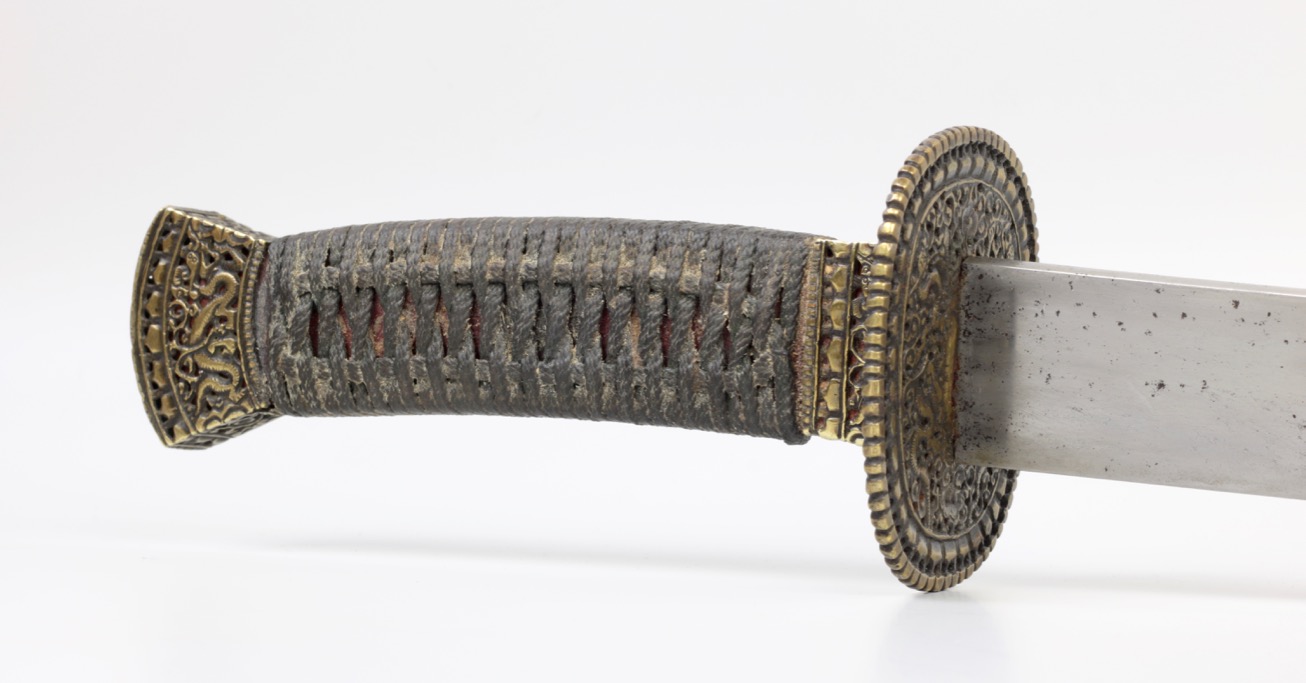 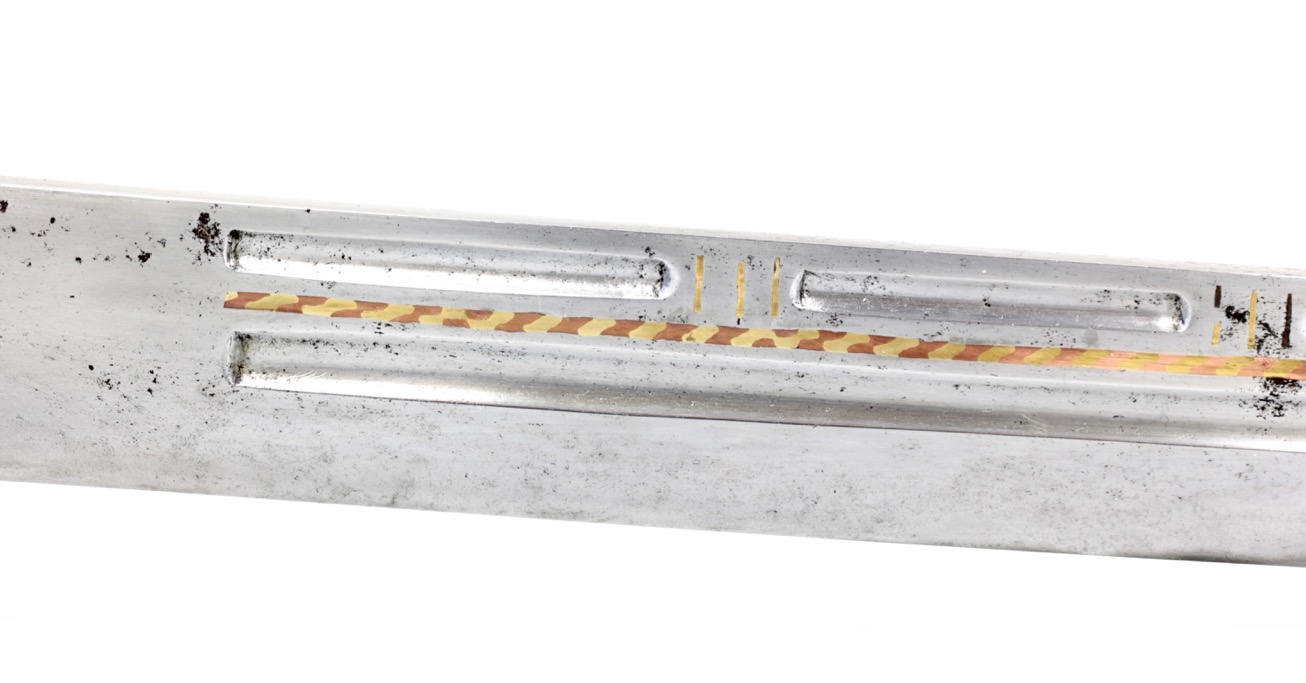 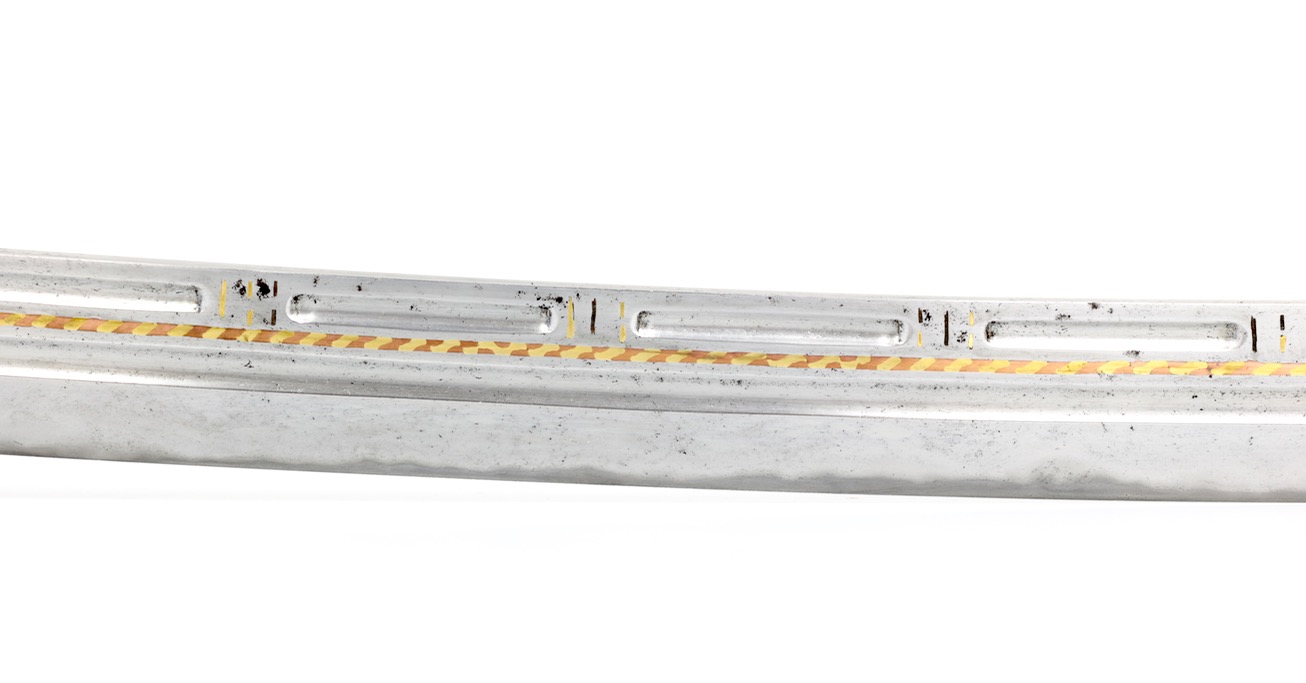 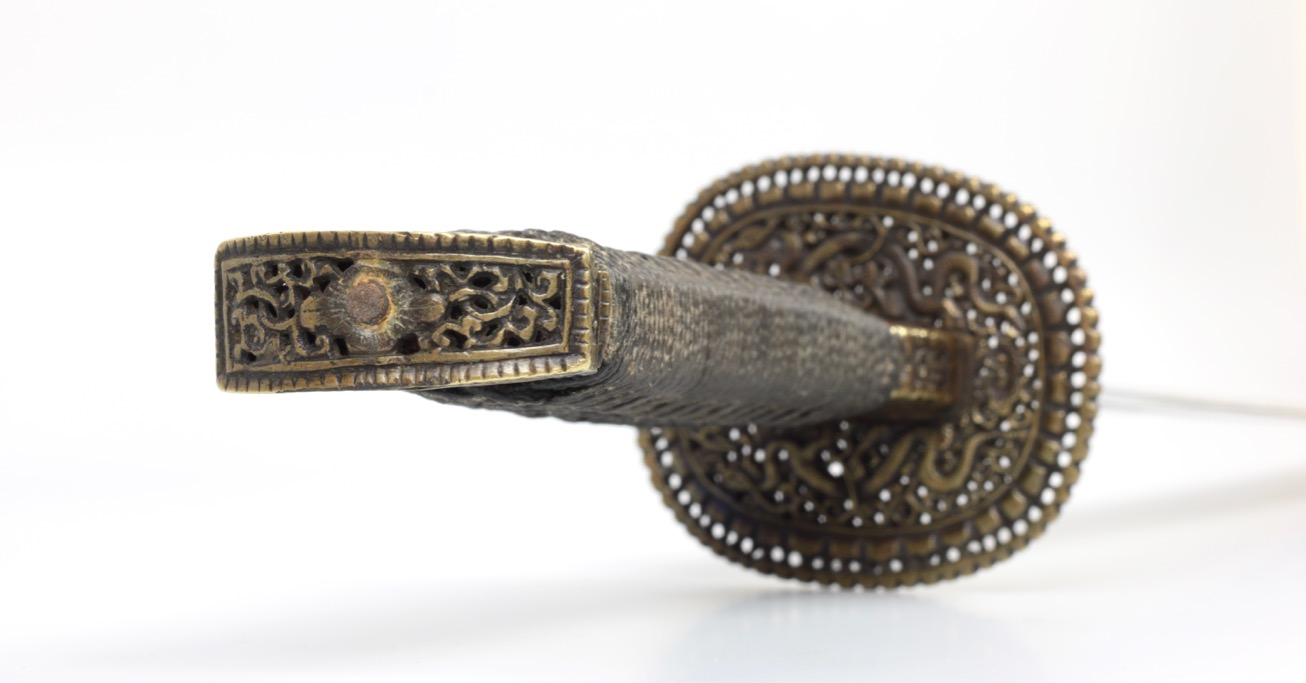 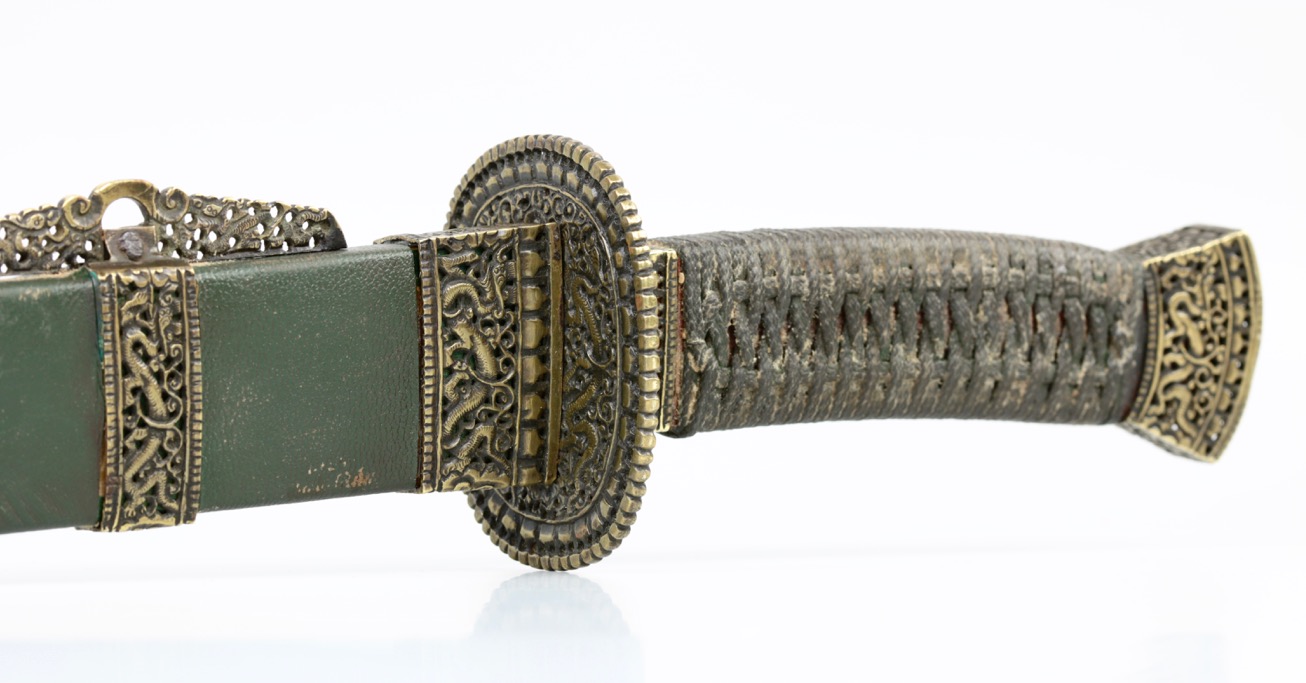