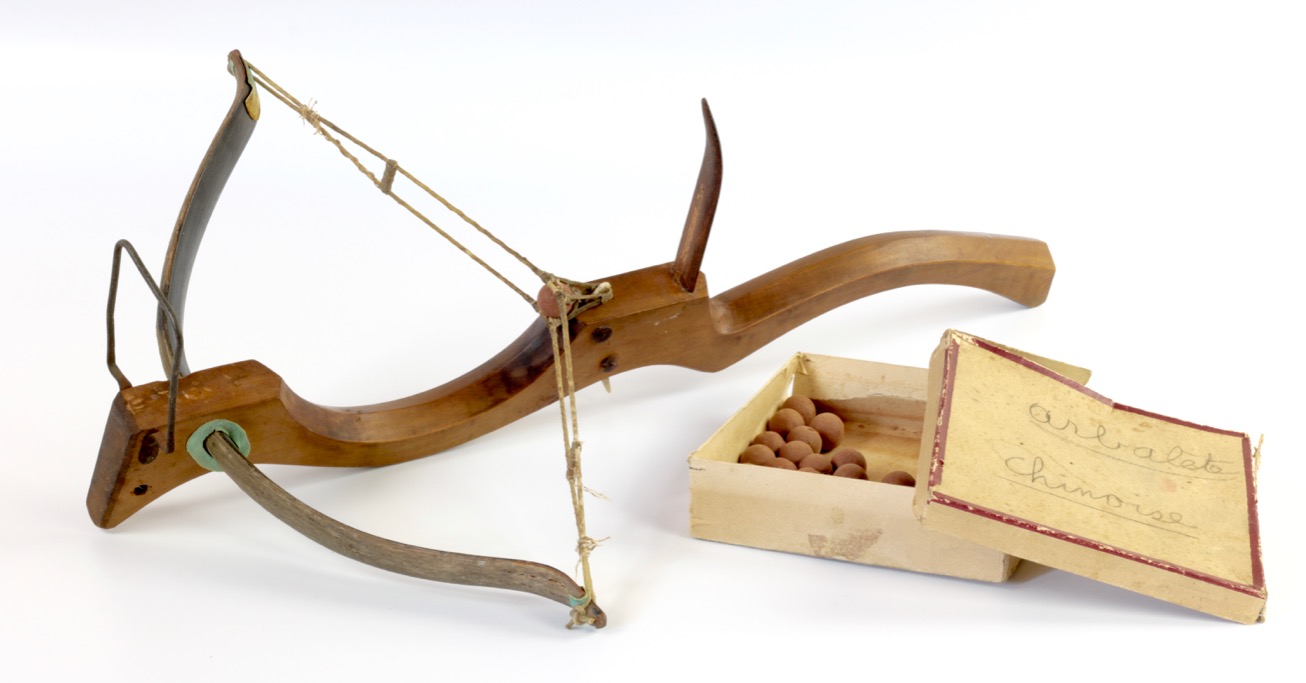 Pellet bows and crossbows have a long history in China. Confucian scholar Jing Fang (京房, lived 77-37 B.C.) noted that the moon was shaped like a ball, much like a round crossbow pellet.1 Well over two millennia later, the Chinese pellet crossbow was still produced in workshops like Ju Yuan Hao in Beijing. They were mainly used for sport, fun, and small game hunting such as birds and squirrels.2

The last mass production of such bows was during Mao Zedong's "Four Pests Campaign" of 1958 where Mao urged the people to kill all rats, flies, mosquitoes, and sparrows. Ju Yuan Hao couldn't keep up with the enormous demand for these bows at this time. The campaign was rather successful and was halted once Mao finally realized that sparrows ate a lot of harmful insects, that could now freely destroy crops.

Production of such crossbows, along with many other traditional Chinese arts and crafts, ended in 1966 when Mao declared a war on anything old and traditional that could be considered anti-proletarian. The last makers of such bows, including Ju Yuan Hao, became a target for the Red Guard and production was ceased.3

A nice example of a Chinese pellet crossbow. It is powered by a composite bow with a bamboo belly and sinew backing. The belly of lacquered black, possibly to simulate the effect of horn often used for the bellies of larger composite bows. It has a double gut string with bamboo spacers and a pocket that nicely fits the clay balls it shoots. Both ears of the bow are protected from the abrasion of the string with patches of leather, dyed with copper-based pigment. Two other leather patches cover the aperture in the stock that the bow goes through.

The stock is of elegant form typical for these, with double curves and clearly defined center ridgelines. It is fitted with a deer antler trigger mechanism that works on iron hinges with horn washers. Both bow and mechanism are in perfect working order, a testament to their quality. There is a hole in the front of the stock for a cord, that would help cock the bow like the stirrups on some medieval European crossbows.

It comes with an old box containing 23 of the original pellets. On the box is written arbalete Chinoise, or "Chinese crossbow" in French.

These bows have a peculiar sighting mechanism that is found on no other weapon I am aware of. It consists of a hind sight with a very small hole. The foresight is an iron frame. Originally, the frame would have had a wire strung from left to right, holding a very small bead. This bead would be calibrated with a few shots until perfectly aligned. The idea is not to look through the sight, as with a modern rifle, but to look past it. When the bead darkens the light through the small hole, you know the crossbow is in alignment.

A nice and charming example of an antique Chinese pellet crossbow. It's well-made, pretty much complete and in excellent (working!) condition. It even comes with a box of some of the original pellets. A man constructing a stock for an identical crossbow.
Photo by Hedda Morrison at Ju Yuan Hao, Beijing, 1935. A man constructing a short "monkey bow", some pellet crossbows can be seen on the wall behind him.
Photo by Hedda Morrison at Ju Yuan Hao, Beijing, 1935. Yang Ruilin, the grandfather of Yang Fuxi, the current owner of Ju Yuan Hao, gluing the horn belly on a Manchu bow.
In the background his store, with several pellet crossbows hanging on the wall.
Photo by Hedda Morrison at Ju Yuan Hao, Beijing, 1935.

The full album of these photographs and further info can be found on my other site, Fe Doro, dedicated to Manchu archery: www.manchuarchery.org