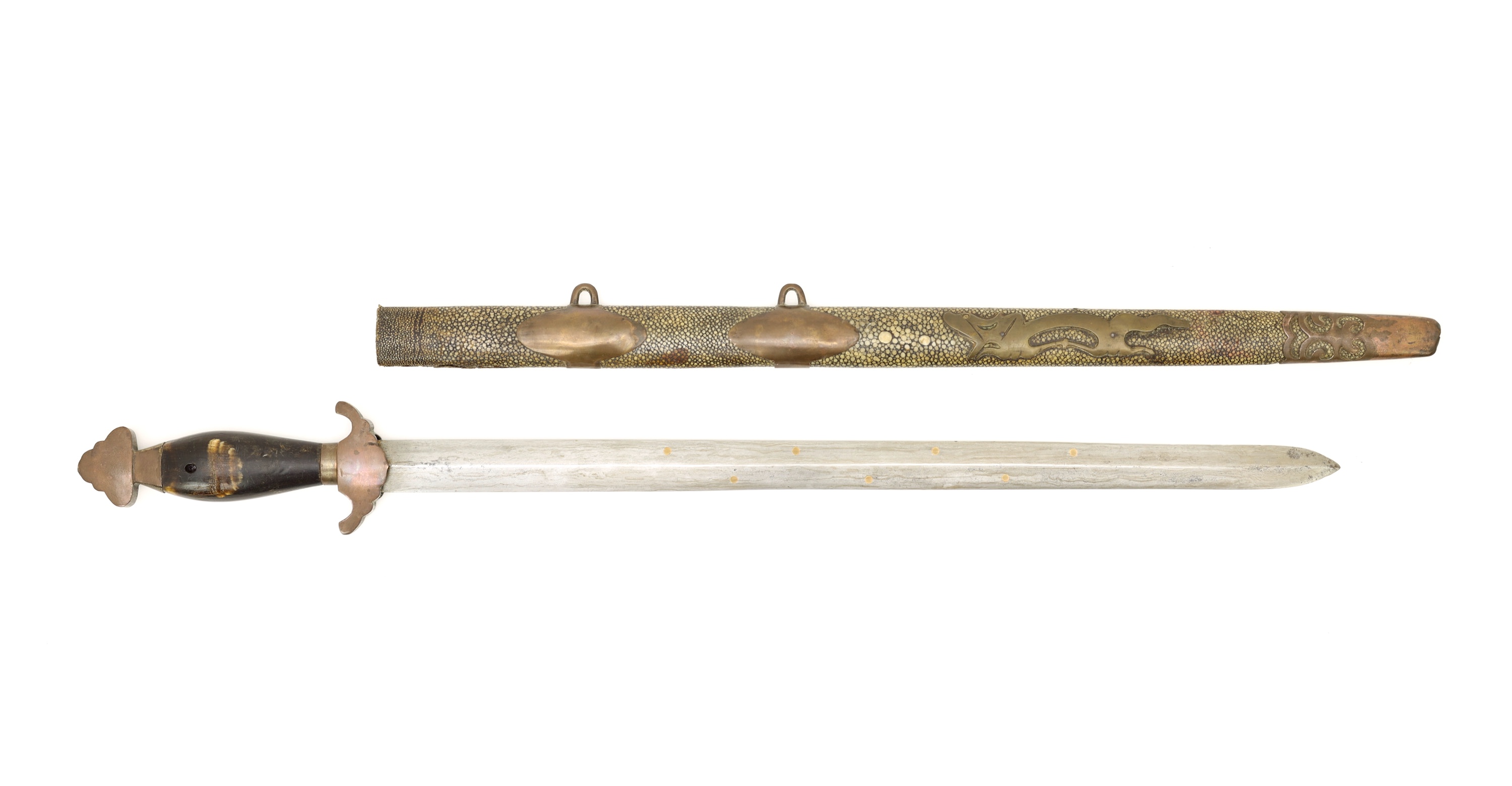 (from hilt side of guard)

From an old Belgian private collection

It is built around a very substantial blade, with a well-defined center ridge. It is tightly forged with no flaws, and a nice wood grain pattern. I lightly cleaned and etched it to show the patterning in the steel, which can be brought out better with a full polish. (Contact Philip Tom for this.)

The blade in current condition.

It has seven brass dots inlaid into the blade, a reference to the Big Dipper, see my glossary article Běidǒu (北斗) to read more about its significance.

The hilt consists of a vase-shaped horn grip made of two scales, mounted with a bronze "ace of spades" style guard and triangular pommel. An interesting design feature is the round ferrule and angular cross-section of the pommel sleeve.

The scabbard is covered with green ray-skin, and mounted in a set of bronze mounts including two suspension bands with shields on the front, a highly stylized rain dragon ornament, and a scabbard endpiece. The mouthpiece is lost.

This is how I personally like them; not too long but with a heavy blade with considerable striking power. The inertia of a shorter, heavier blade also makes it more protective in the defense; it's harder for an opponent to beat aside.

One wonders who, in the late Qing when firearms were used to devastating effect against Qing troops, would still wear a functional fighting jiàn. We are indebted to adventurer William Mesny who eventually became a general in the Qing army, for a lively description of a dueling culture in China that lasted into the early 20th century:

Fu Hu Chün 副護軍. Second battalion of guards. This is an extra battalion of guards, all picked young Kuei-chou men, between twenty or thirty years old, real swashbucklers, good looking and lavishly decorated with scars obtained in battle or duel. Every other man of them has a Yüeh Ching, moon instrument (a sort of short handled like discular guitar) slung to his back and carries a dagger as well as a fancy shortsword at his side. These are duelists by profession apparently and also troubadourists of the mountains too. Each warrior has his fancy girl at home and an extra one or two in every town. Duelling and love-song singing is a sort of pastime with them when not engaged in the stern realities of actual warfare.

They fight duels with each other sometimes as soon as they are cured from former wounds as acts of revenge, called Pao Chou (報仇), and they sometimes take up each other's cause, as for instance in case of wrongful treatment of the weak and defenseless by the strong, or using might against right; this kind of protection or defense is called Pao Pu Ping (抱不平), and is much in vogue in Kuei-chou at this present time. Many young men learn the use of weapons and take a great deal of physical exercise so as to accustom themselves to hardships with a view of avenging some one's wrongs. Some or many such are now enrolled in the ranks of our Fu Hu Chün, the second battalion of General Liu's guards. Nearly all these young men have a servant to do their camp work for them, to act as squires to knights of olden times. Soldiers of the guard battalions all hare the characters Ch'in Ping 親兵 Body-Guard, Garde du Corp, sew on front and back of their uniforms, whilst ordinary soldiers have the word Yung 勇, which means Brave of Knight. It is usually from the ranks of distinguished Yung the Ch'in ping are recruited; all-being picked men as often for their good looks as their martial qualities, as may be easily perceived on parade.

The above narrative of traveling, dueling heroes with small guitar-like instruments almost reminds of Zorro of Western pop culture. It shows that there was a fairly large, unregulated market for small arms that were actually put to use. The fact they they had these instruments and even servants shows that they were not poor, which explains the quality of some of these that exceeds militia and military grade weapons of the same period.

Very clean blade, only minor pitting here and there. Some edge damage near tip. Minor play in guard and grip, pommel sits tight. Some damage here and there, a split in the pommel sleeve. Scabbard mouthpiece is lost. A split to the scabbard mouth on one side, but luckily structurally still quite strong due to the ray-skin. Almost all of the ray-skin remains. The stylized dragon on the scabbard is a little bent, its tail slightly lifting from the scabbard. See photos.