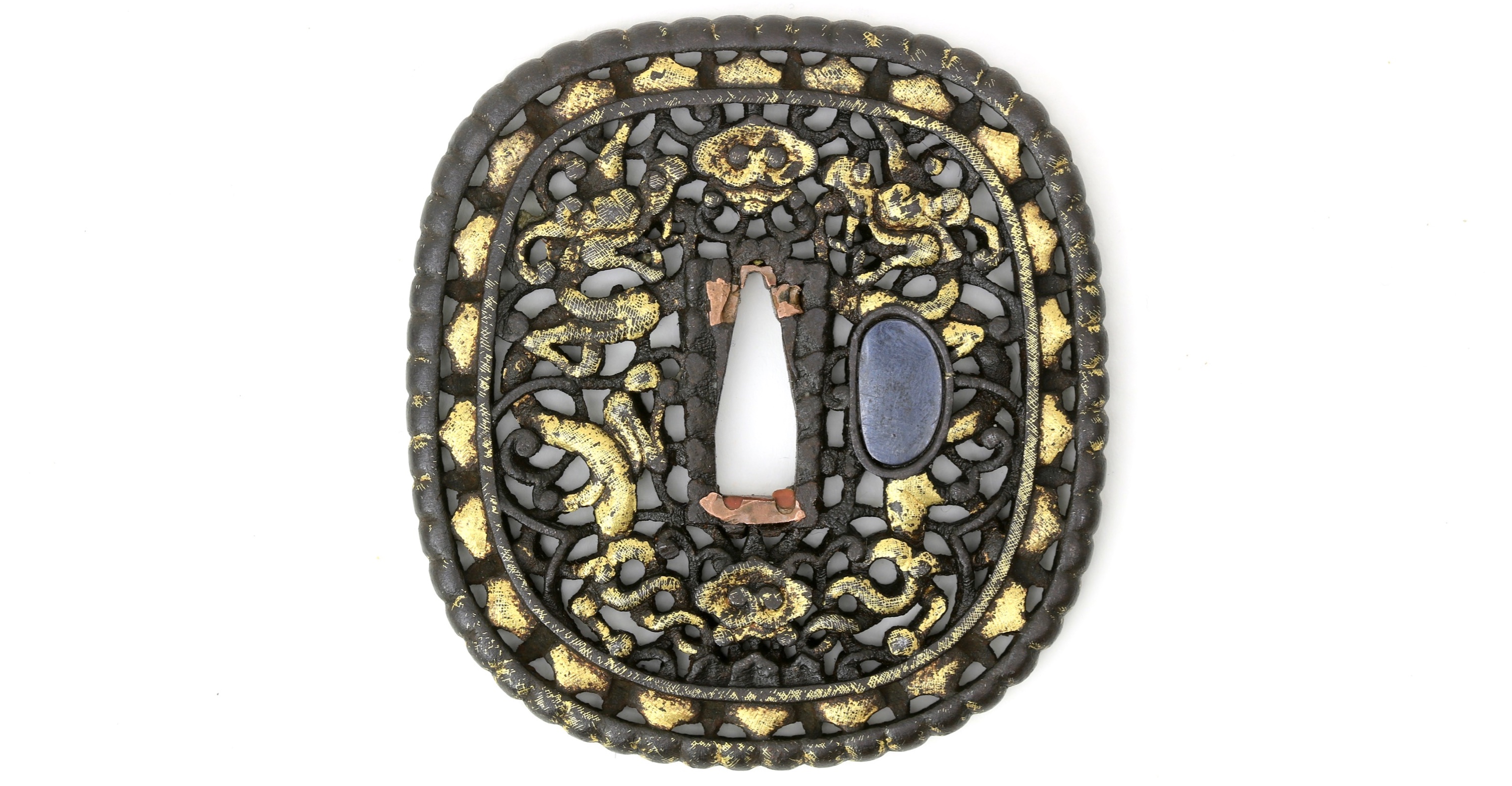 A Chinese sword lòukōng sword guard of the 17th century. Lòukōng (鏤空) consists of the words lòu (鏤), "to carve", and kōng (空), "hollow". It is used to describe pierced work, openwork or fretwork.

This example has a beaded outer rim and a smooth inside rim, with in-between alternating stylized lotus petals. Such lotus petal borders are also seen on the base of Buddhist statues, where the lotus symbolizes the path towards enlightenment: It grows from the murky bottom upward towards the light, and exposes itself as a pristine flower above the surface.

The center of the guard is pierced and chiseled with two facing dragons among narrow tendrils, both reaching for a stylized cloud at the top. Such a cloud is also dubbed rúyì
(如意), meaning "as you wish" and as such it is seen as a wish granting emulet. There is another on the bottom, just above three stylized stones that represent the mythological Kūnlún (崑崙) mountains.

In the center of the guard is a rectangular plate with the opening for the sword's tang. It is smooth on the side facing the hilt, and ribbed on the exposed side where the blade comes out.

The guard was at some point imported into Japan where it got the addition of a kozuka-hitsu-ana, a small hole that was meant to accomodate a utility knife that was often worn inside the scabbard alongside the Japanese sword.

At some point, the hole fell into disuse and it was the Japanese habit to then plug the hole. In this case, it was plugged with shakudō, a prized alloy of copper and gold that was artificially patinated to a "raven black" color, resembling lacquerwork.

Another modification is the alignment of the tang opening. In the original configuration the sword would have been worn suspended from a belt, edge down.

A Chinese imperial saber with a full set of openwork mounts, from the Max Dreger collection.
Auctioned in 1925. Purchased by George Camerion Stone.
Now in the Metropolitan Museum, New York.

The Japanese katana was customarily worn edge-up stuck through a sash called the obi. So its Japanese orner had the tang opening changed, so that the dragon would still face up when worn on his sword. Copper was used as a filler to provide a tight fit to the Japanese sword tang, or nakago.

The earliest provenanced examples of these guards are all associated with the Manchu aristocracy of the early 17th century. The earliest of which is a saber attributed to Hong Taiji, who ruled from 1626-1643, who founded the Qing dynasty in 1636. 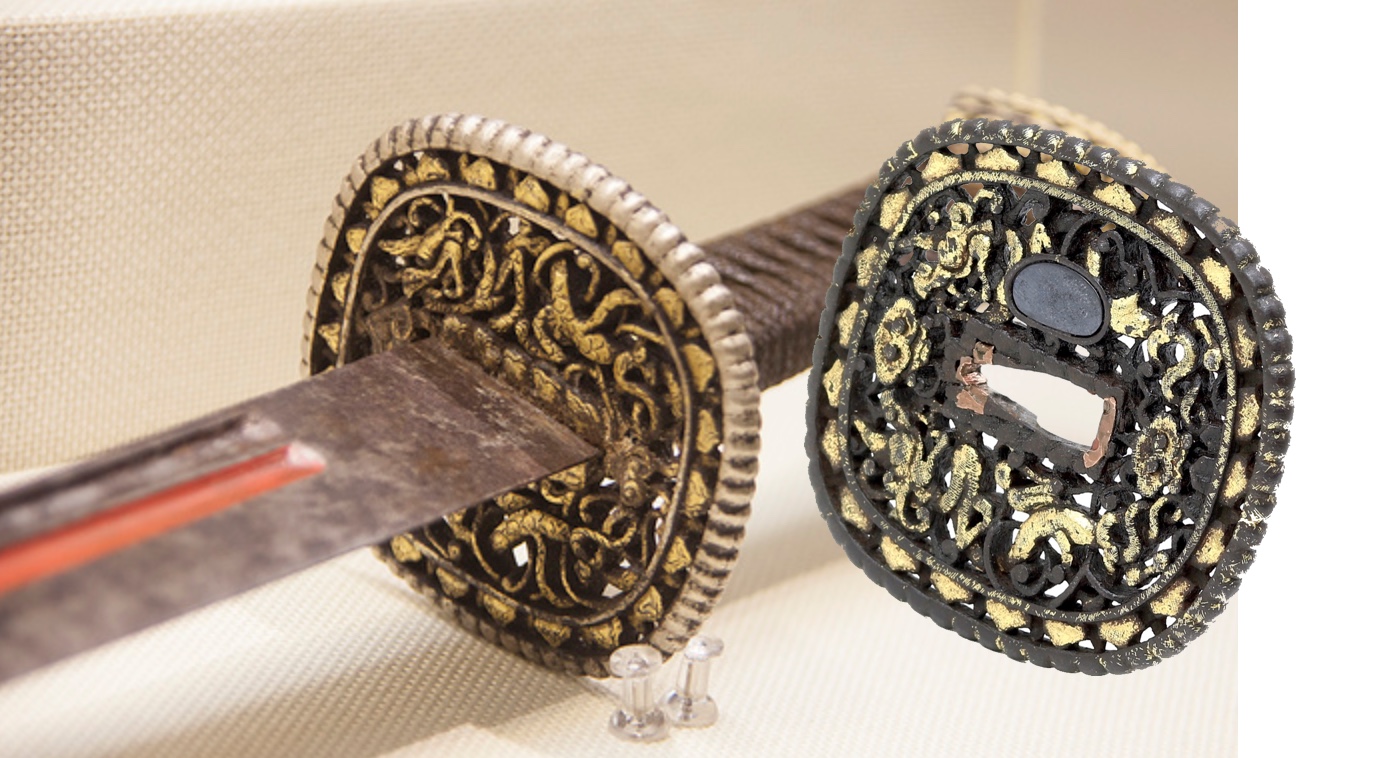 A saber that once belonged to Hong Taiji, in the Shenyang Palace Museum.
Superimposed on the right, this guard.

By the end of the 17th century, the style had become finer, less bold and the beaded rim less defined. This is seen among others in the guard of a saber that was presented to a Mongolian temple by the Kangxi Emperor in the year 1697.1 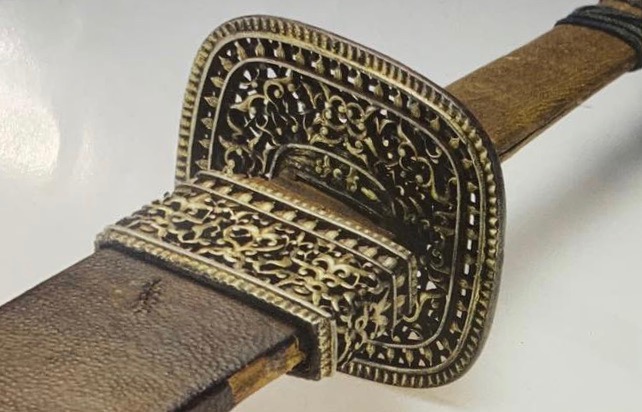 A saber presented by Kangxi in 1697. Now in the Ningbo Museum.
Notice the difference in workmanship to our piece, and the Hong Taiji piece.

Looking at these two benchmark pieces, our guard is probably latter Jin to early Qing dynasty imperial work, probably dating from between 1600-1650.

A nice example of an early 17th-century Chinese sword guard of a type of which rather few survive today. Its resemblance to the work on a guard attributed to Hong Taiji is uncanny.

Sword guards like these gave rise to an entire sub-genre among so-called nanban tsuba and Asian export sword guards. In the 19th century, the type was known in Japan as Kwanto-gata or "Kanton style" / "Canton style".2 Despite the name there is no evidence that they were were made in Guangzhou or even South China, the work seems to have been primarily made in the north under imperial patronage. Kwanto-gata probably sprang from Nagasaki dockside slang, referring to the Chinese merchants who imported them who mostly sailed from the port of Canton (Guangzhou). 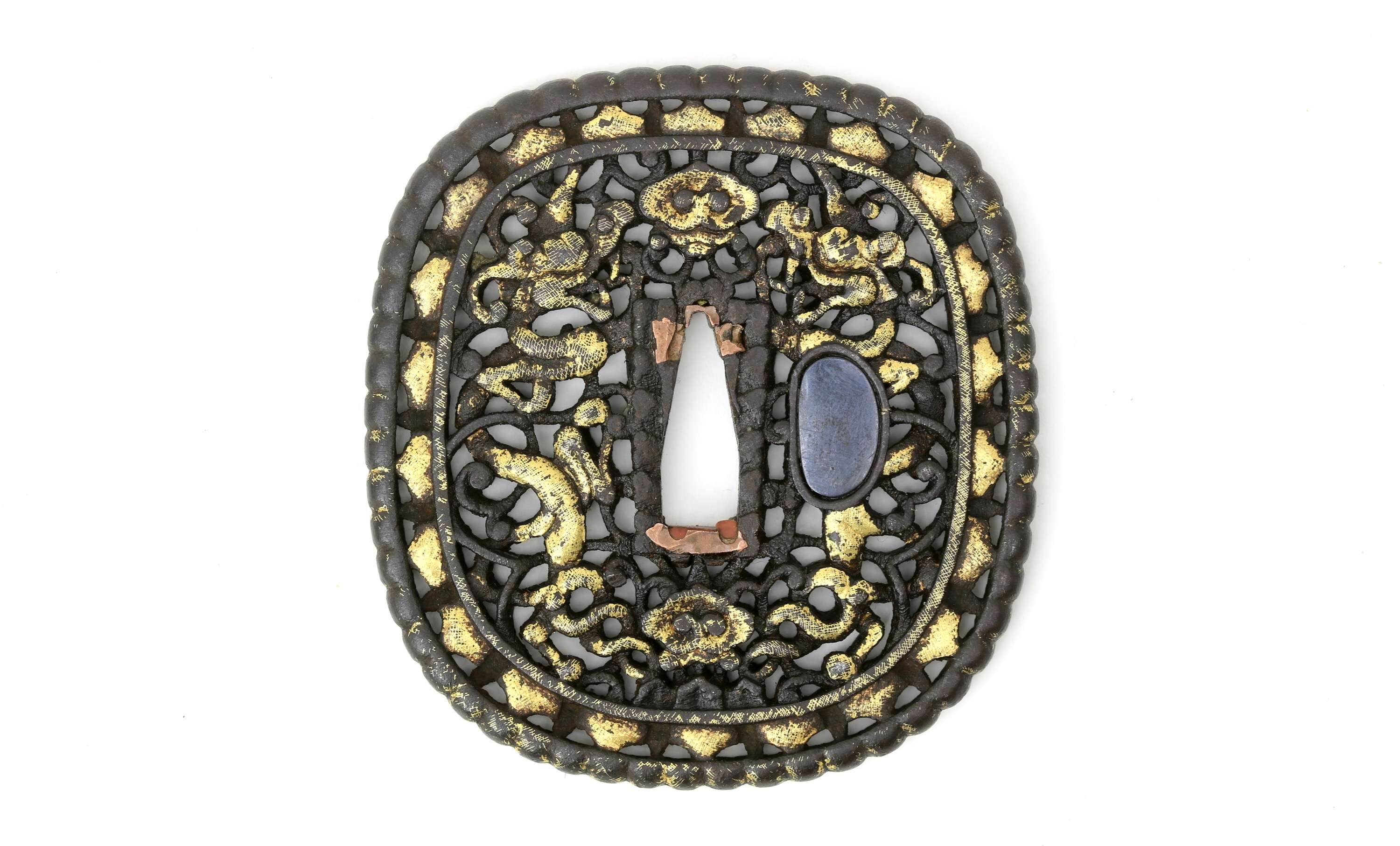 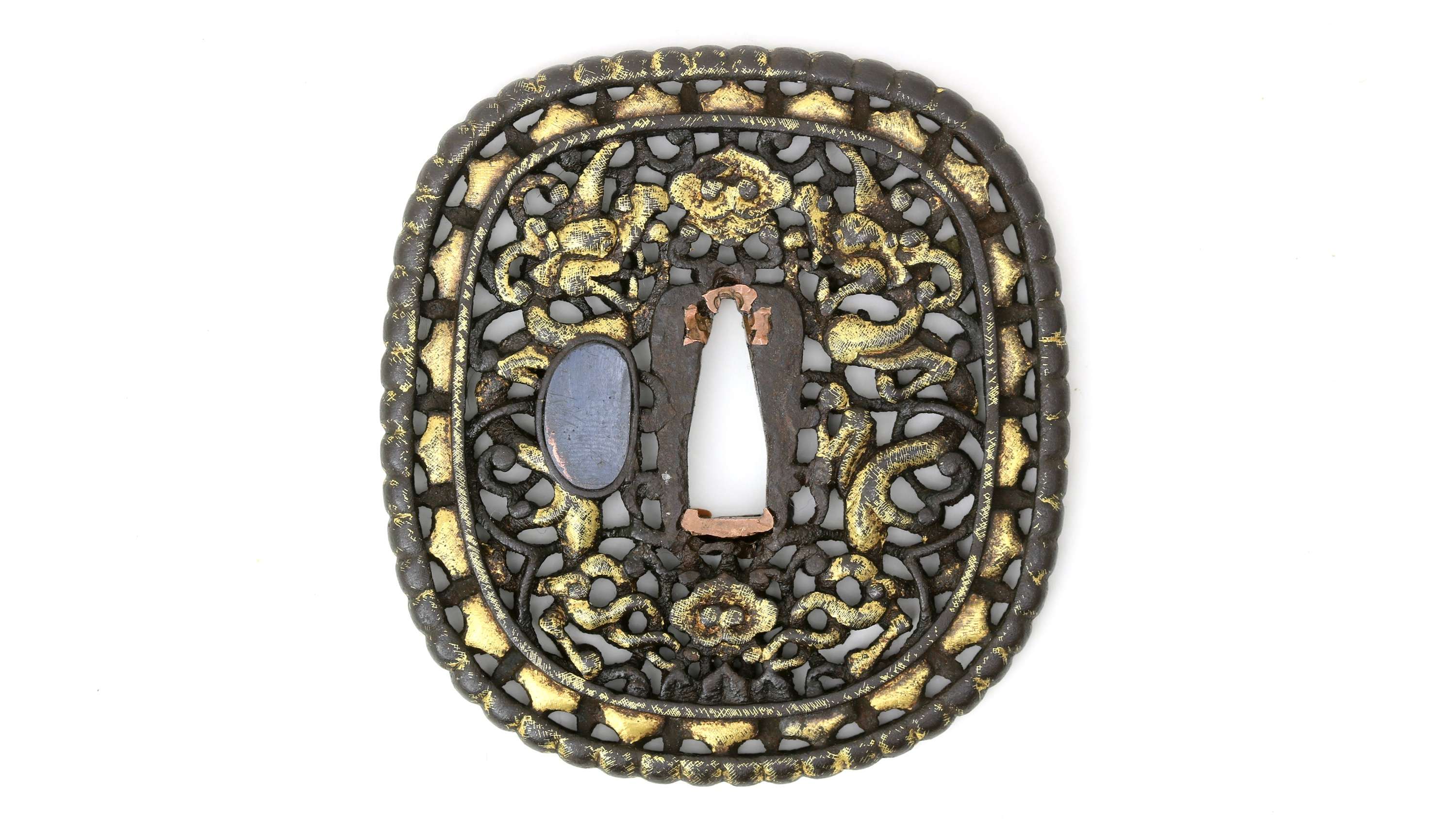