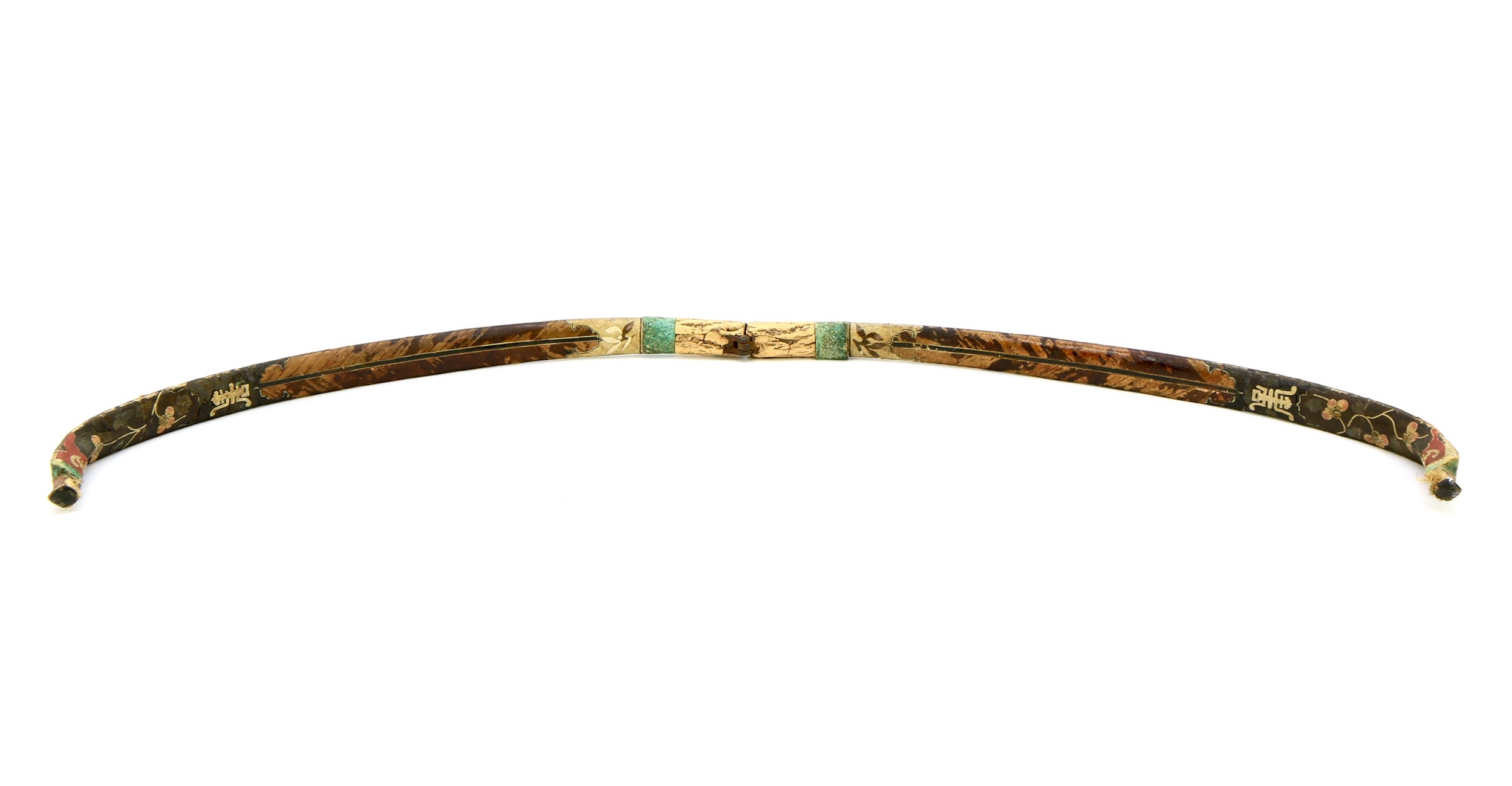 Among antiques, a number of Chinese short-eared bows survived that have no string bridges, nor long ears like the Manchu models that were popular in the Qing. Among these short-eared bows, we often see that surviving examples that retained their string come with strings that were made for pellet shooting.

A portion of these short-eared bows, in addition, have an iron hinge in their grip and can be folded for easy transport. This has lead some to believe they were "palanquin bows" carried for self-defense, but this does not make much sense: If you can afford being carried around in a palanquin you can afford some armed guards. If a bow was kept at the ready for emergencies at all you would want it to be strung already.

Hinged, short-eared bows were most likely sports bows, a lot of them used for the shooting of small clay pellets. Martial artist Tong Zhongyi, for example, was apparently unbeaten in flicking pellets: whoever could hit bronze cymbals suspended from a tree at a distance of 30m the most times with 30 pellets won.1

Although most Chinese short-eared pellet bows date from the 19th century, the type dates from much earlier. Manchus using such bows for bird hunting can be seen in one of the late 17th century Kangxi southern inspection scrolls.2

Notes to introduction
1. See my article "The last Manchu archer part 1" on manchuarchery.org.
2. This is seen on Kangxi's Southern Inspection Scroll number 10. (康熙南巡图 第十卷) by Wang Hui. Painted between 1691-1698. I examined the scroll up-close in the Louvre during the exhibition titles La Cité Interdite au Louvre in 2011. The accompanying catalog mentions the scroll, but it is unfortunately not printed in full and the relevant scene is missing.

A typical example of a 19th century Chinese folding bow. The construction is similar to other composite bows, with horn bellies on a wooden or bamboo frame, with a bent "ear" spliced in on either side. The back of the bow is covered with sinew, which in turn is protected by birch bark. The limbs are fairly substantial for this type of bow.

The bark decoration follows the typical 19th century style, with obliquely glued bark on the main bending sections, divided by a black line. Nearing the ridig section near the tip is a patch of black painted birch bark with patchwork of auspicious luck symbols, and above that decorations of plum blossoms. At the very tip are red painted patches of bark with patchwork of bats on top of them, a pun for luck in Chinese.

On the belly side, both horn faces show they are spliced and consist of two pieces of horn. One splice is a V, the other is higher up and consists of a straight line. At the very tip are painted two little faces, often seen as monkey faces and the bow thus called "monkey bow".

The grip is covered with cork. It is cut exactly down the center and re-joined with an iron hinge, allowing the bow to be folded upon itelf. At both sides of the grip is green paper, imitating the look of ray-skin. Above that are two stylized lillies.

In decent condition. Some losses and flaking to the fragile birch bark covering and some of the decorative features. Current surface remains fragile at places. The horn at the V-splice is lifting and the sinew near the tips is fraying a bit. See photos.

A nice example of the somewhat rare Chinese folding bow. It is fairly substantial for such a bow, and was perhaps used for somewhat larger bird hunting. 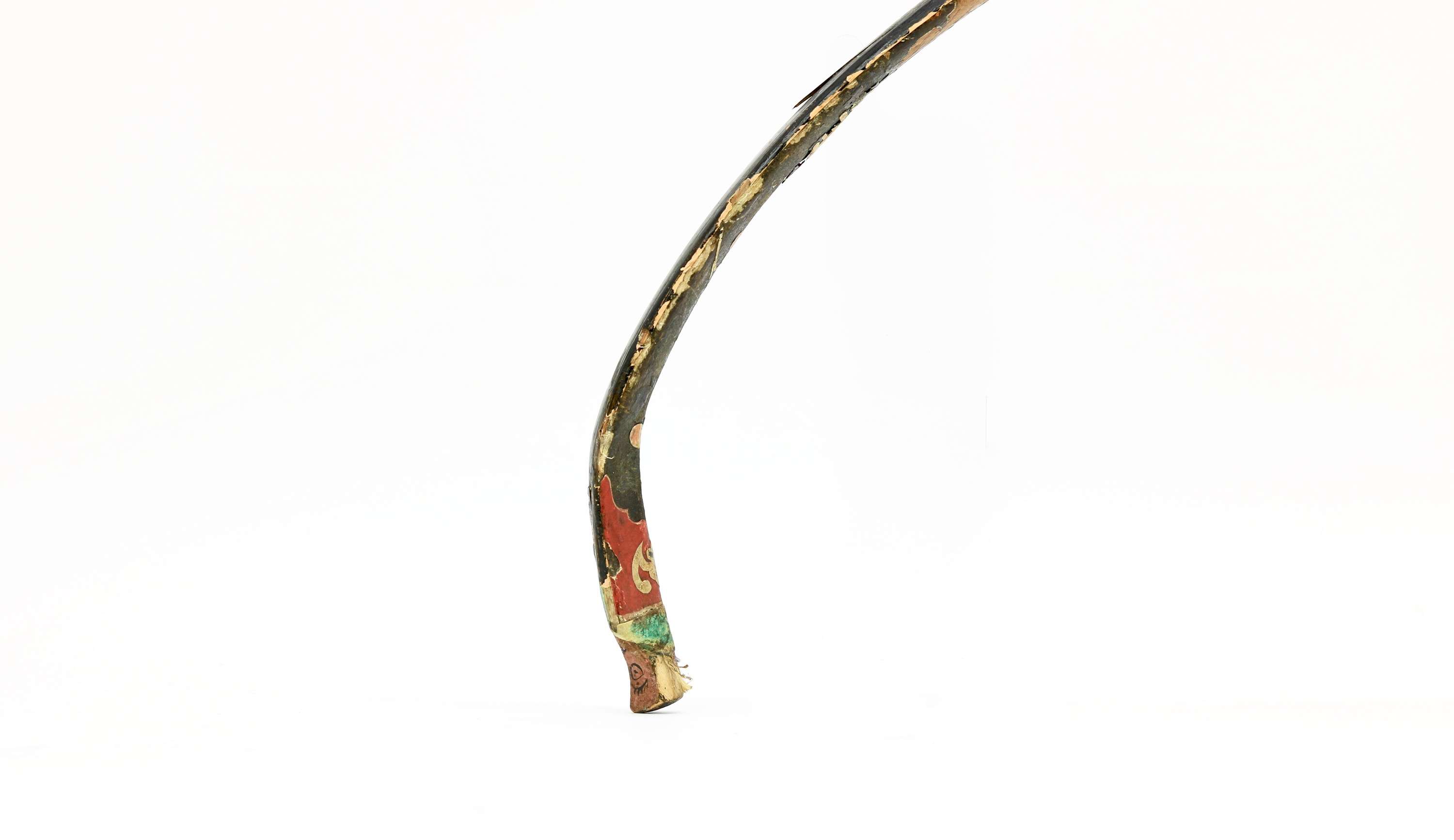 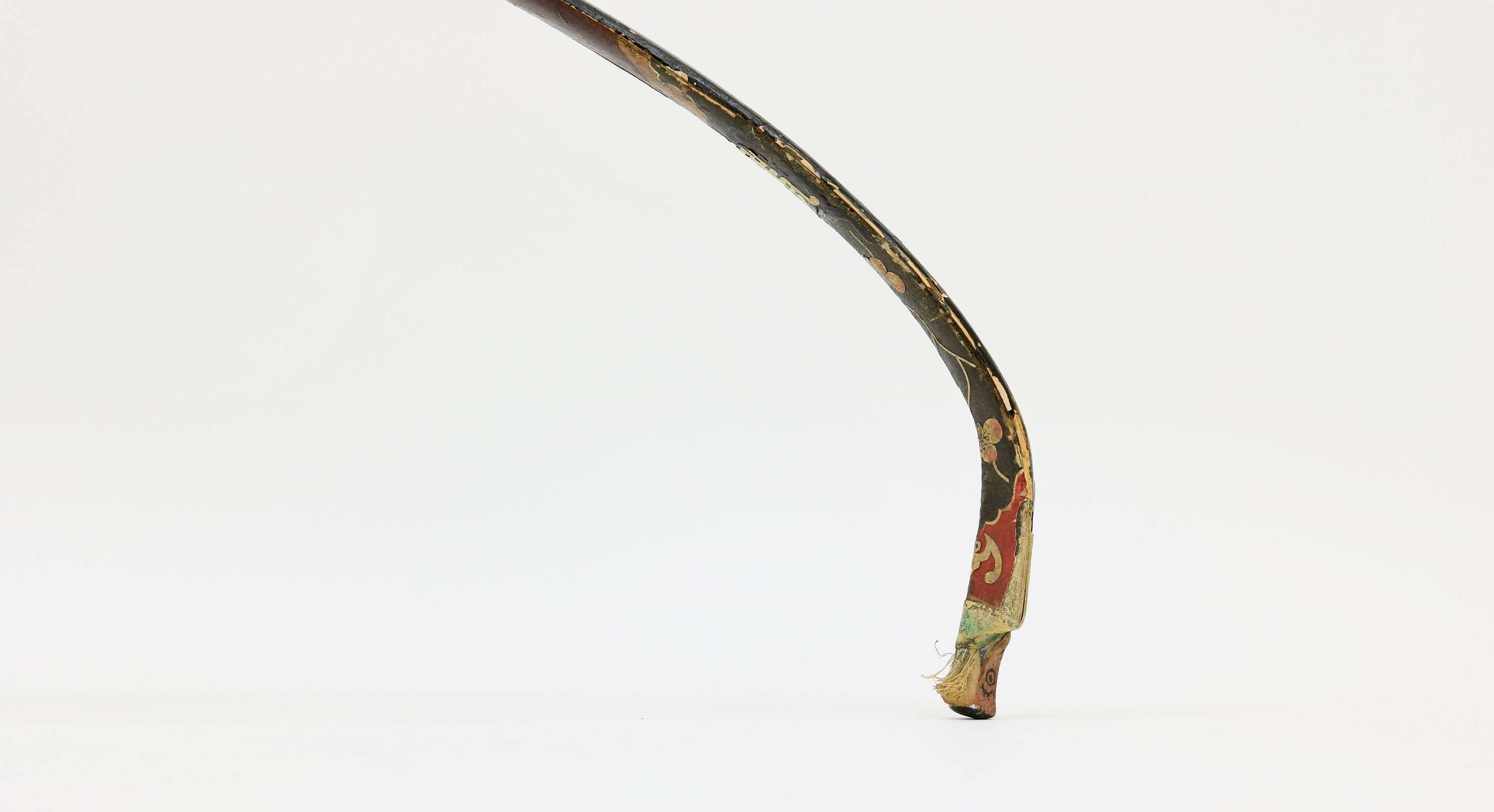 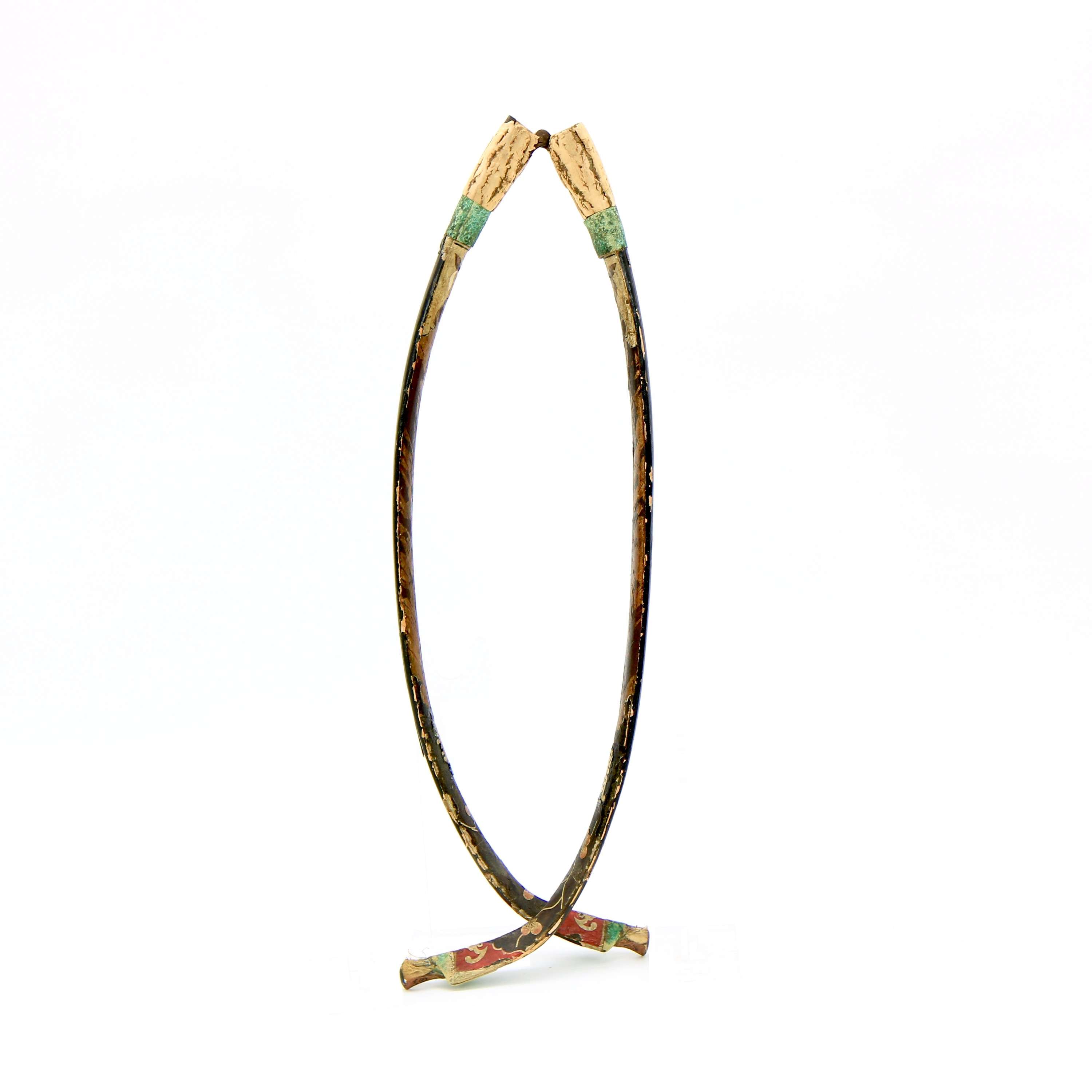 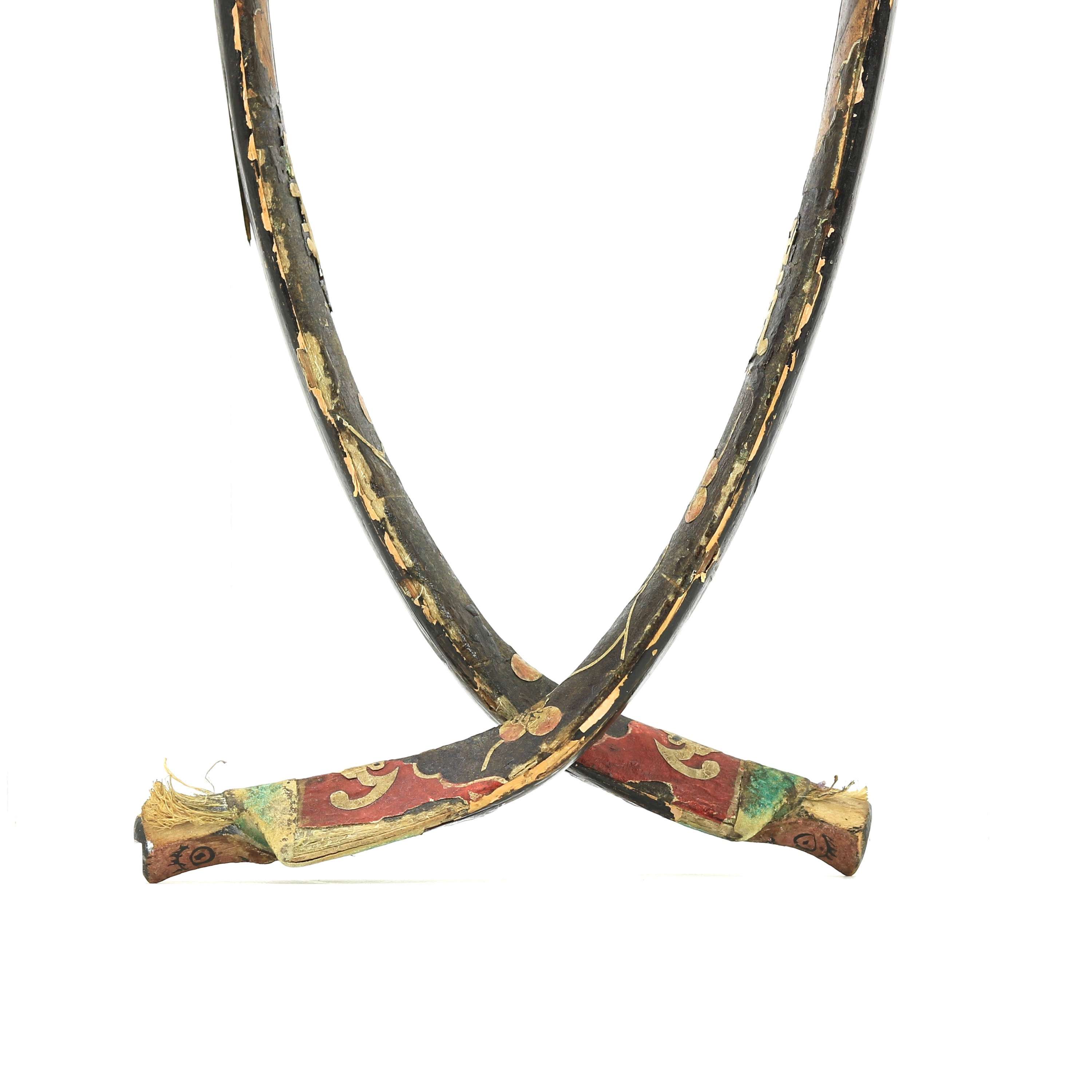 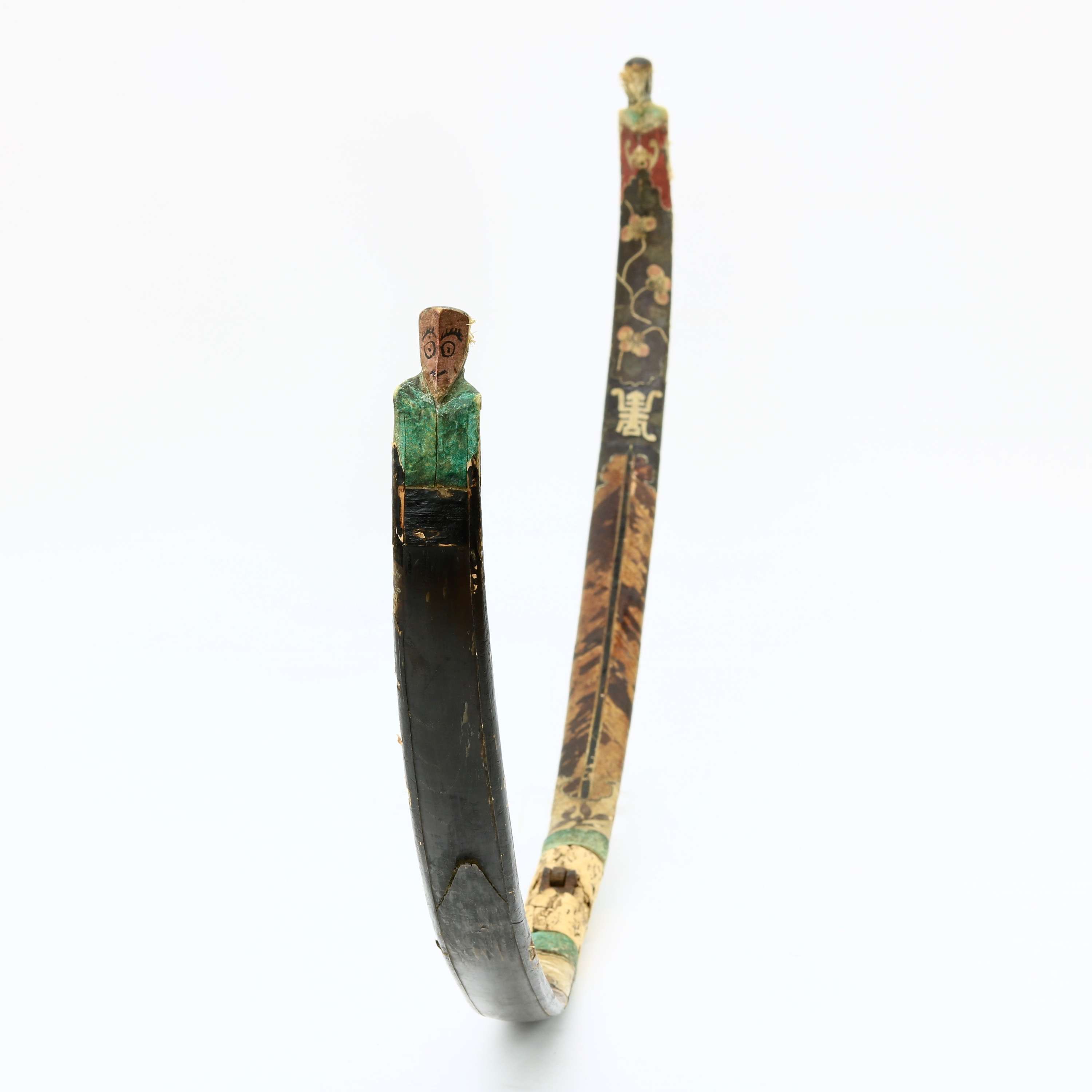