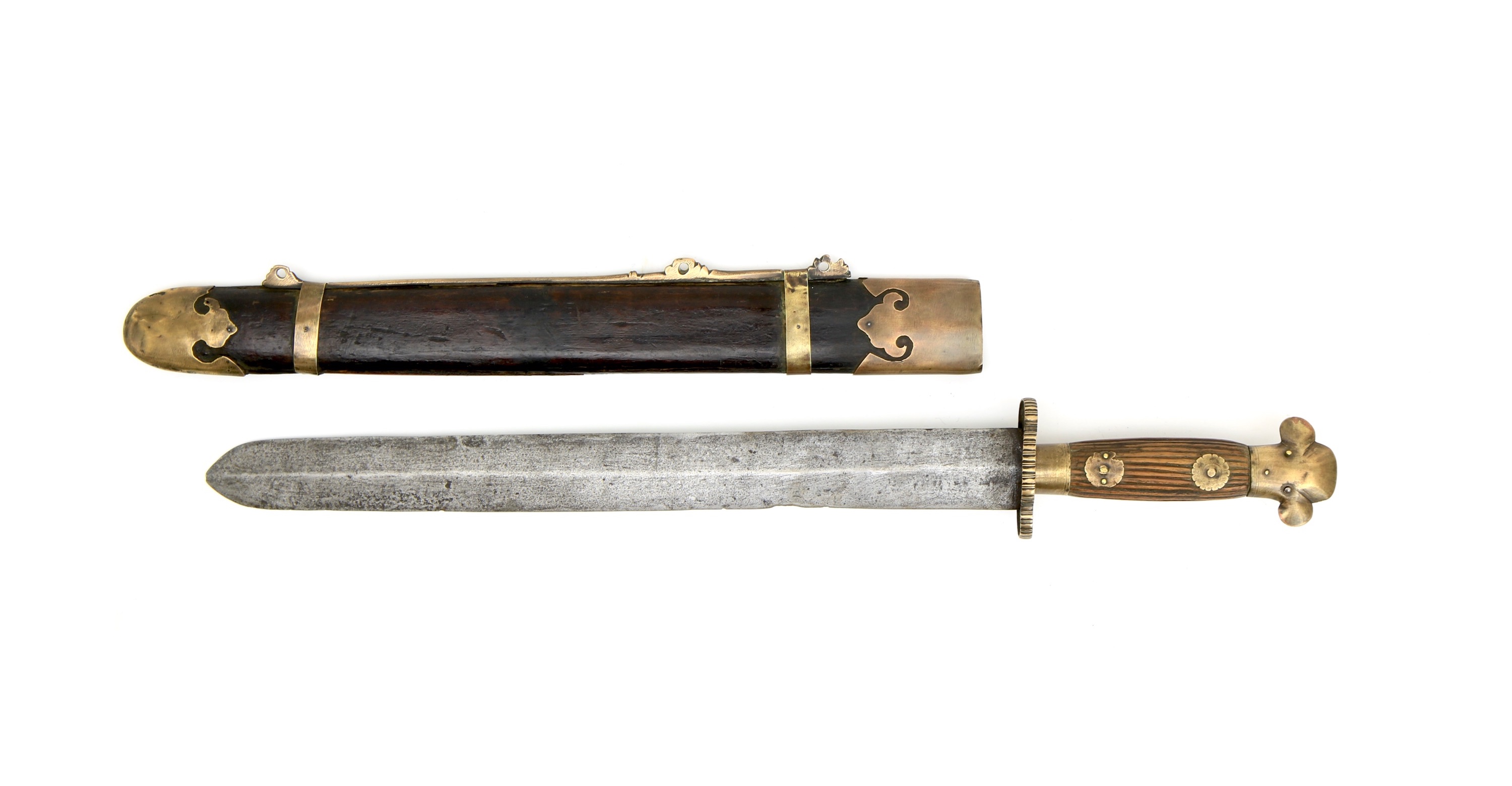 There is no shortage of swords described by dealers, museums, and private collectors as "Chinese executioner sword". Very few of them are. These are usually large niúwěidāo, dàdāo or semi-polearms with large glaive-like blades, all general fighting weapons which were not produced with executions in mind, although some did see such use occasionally.

There are a few types of Chinese swords that do seem to be dedicated executioner's weapons. One of these types is a short, broad and particularly heavy version of the jiàn, the Chinese double-edged straightsword. 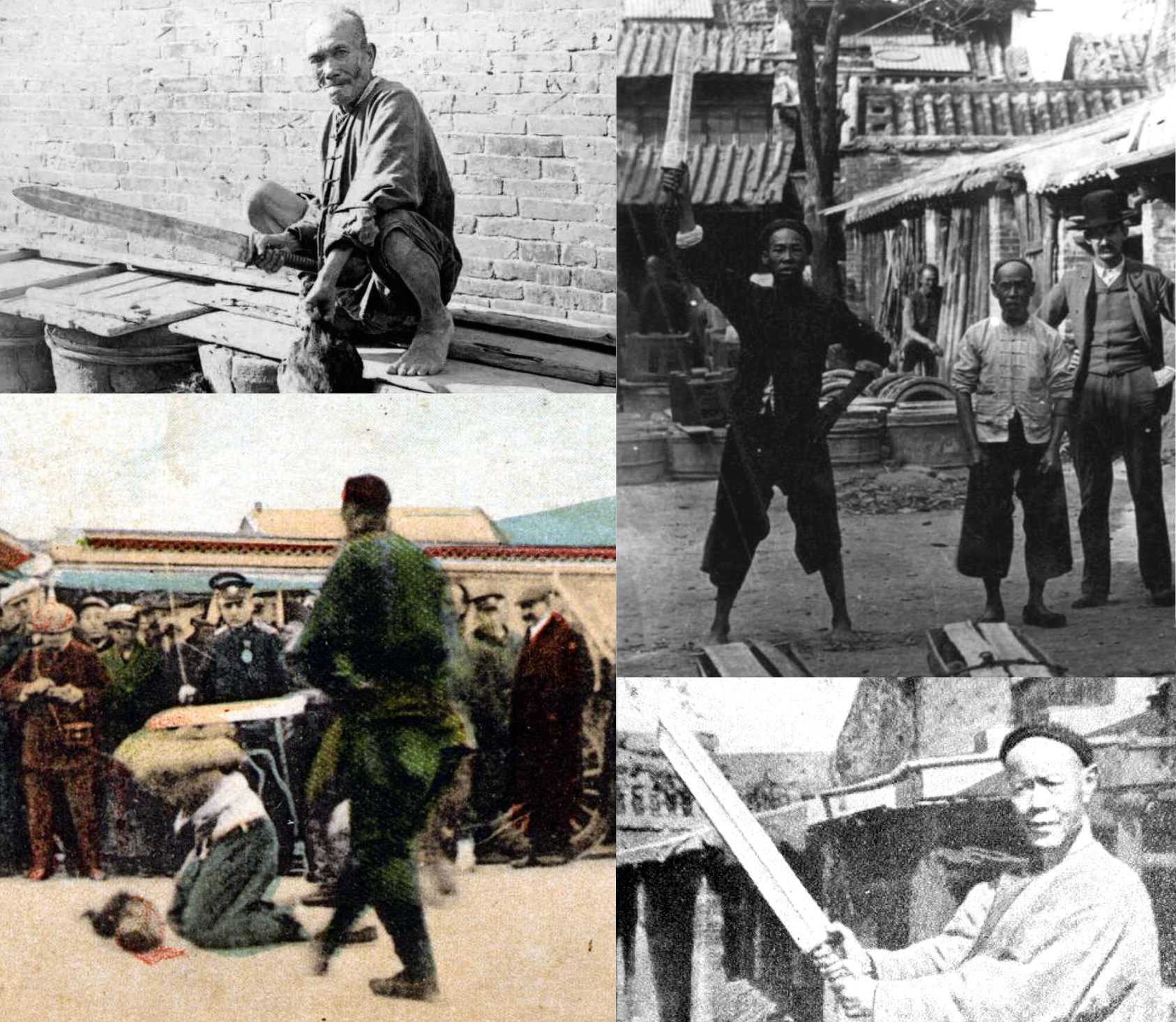 I have seen at least two of these, in private collections, that have turned wooden handles. Today I present one with a slightly more conventionally formed hilt.

A short and stout Chinese jiàn. It has a massive, forward balanced blade with rounded, ax-like edge bevels and a pronounced central ridge. One side of the edge with some damage, and places where damage seems to have been polished out. The blade surface shows signs here and there of laminations, and it is probably made in the standard Chinese way with a high-carbon steel edge plate exposed at the edges.

It features a small brass guard of a traditional lobed form that is often seen on civilian sabers. It has a raised edge with file-work decoration. The grip is made of two slabs of hardwood, deeply ribbed for extra grip. Unusual for Chinese swords, the grip is riveted to the tang by means of two iron rivets with brass washers in a style more reminiscent of Vietnamese pole-arms.

The lobed pommel echoes that of earlier Ming-style swords. It is not attached by means of a peened tang end, but rather nailed to the end of the wooden grip with brass nails. An unusual construction. Two of the four washers also have brass nails in them, it is almost as if the user nailed down everything that started to rattle. The riveted construction makes a very sturdy handle that is still very tight, with only minor play in guard and pommel.

It comes in a wooden scabbard with typical Chinese style brass chape and mouthpiece, with "cloud collar" cutouts in a style also seen on military and civilian sabers of the second half of the Qing dynasty. An unusual feature about the scabbard is a very long suspension bar with three holes in it. The piece could probably both be suspended from the waist and slung over the shoulder.

The condition is not great. There is considerable edge damage at the blade. The scabbard has damage here and there, and an old repair at the bottom half. Also losses to the scabbard mounts. All damage seems to be old, and of the period, though. The whole represents a well-used tool and companion for a Chinese headman.

A very rare example of a Chinese, single-purpose headman's sword. Old photographs and descriptions mention beheadings in China with an array of swords, most often standard military swords that any soldier would carry. In a few rare instances, a short, stout straightsword was used instead which seems made solely for this purpose. Here is one such sword. 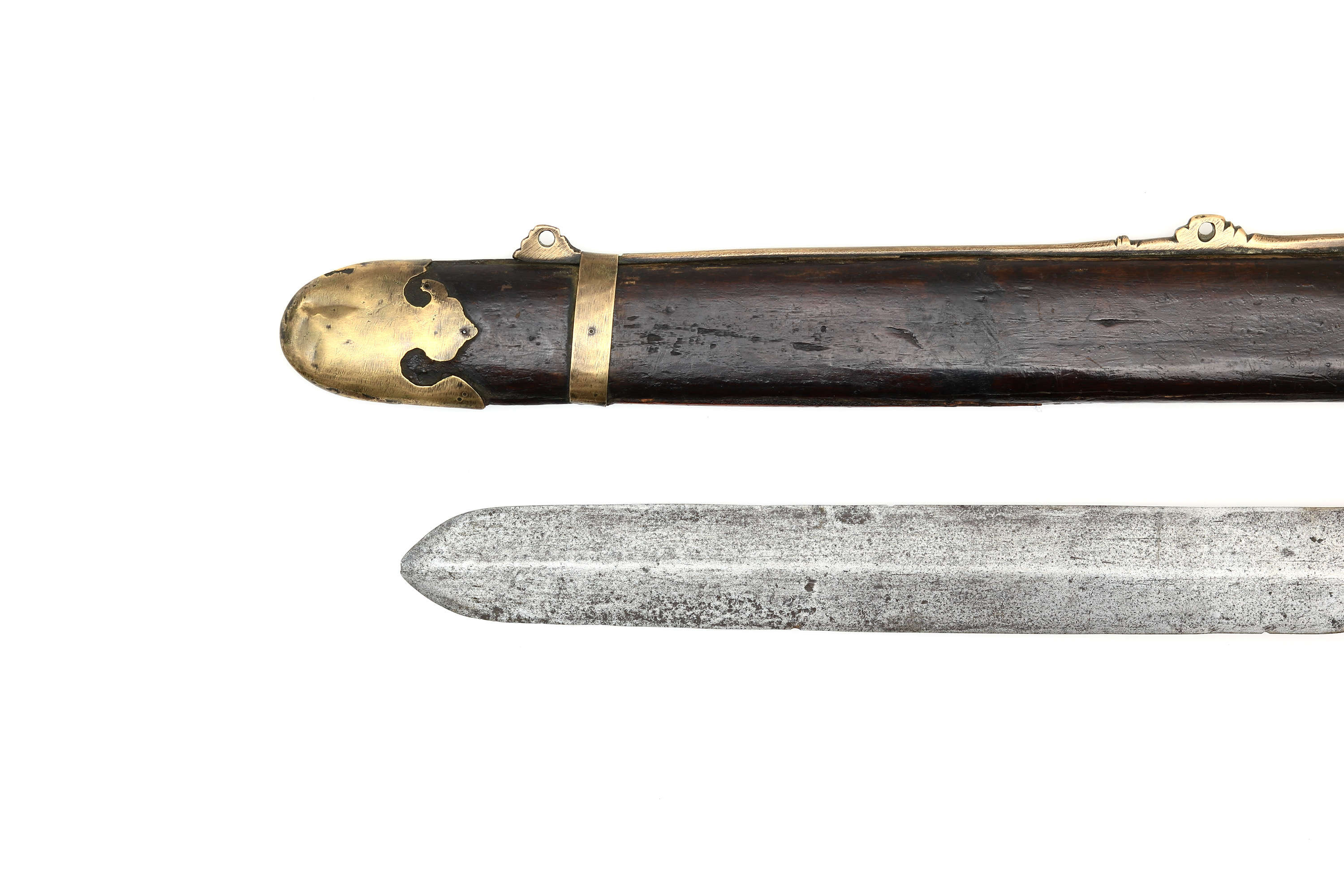 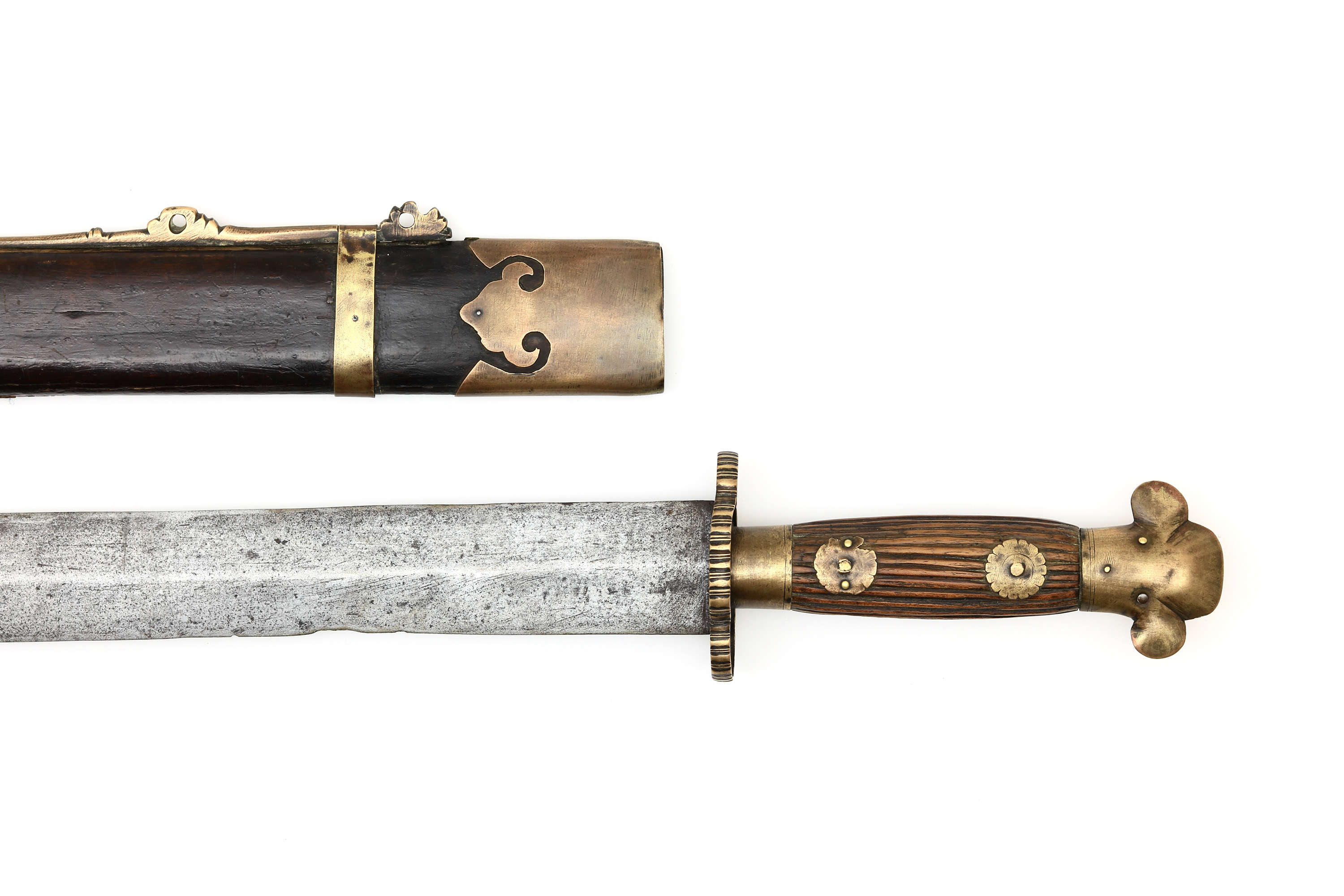 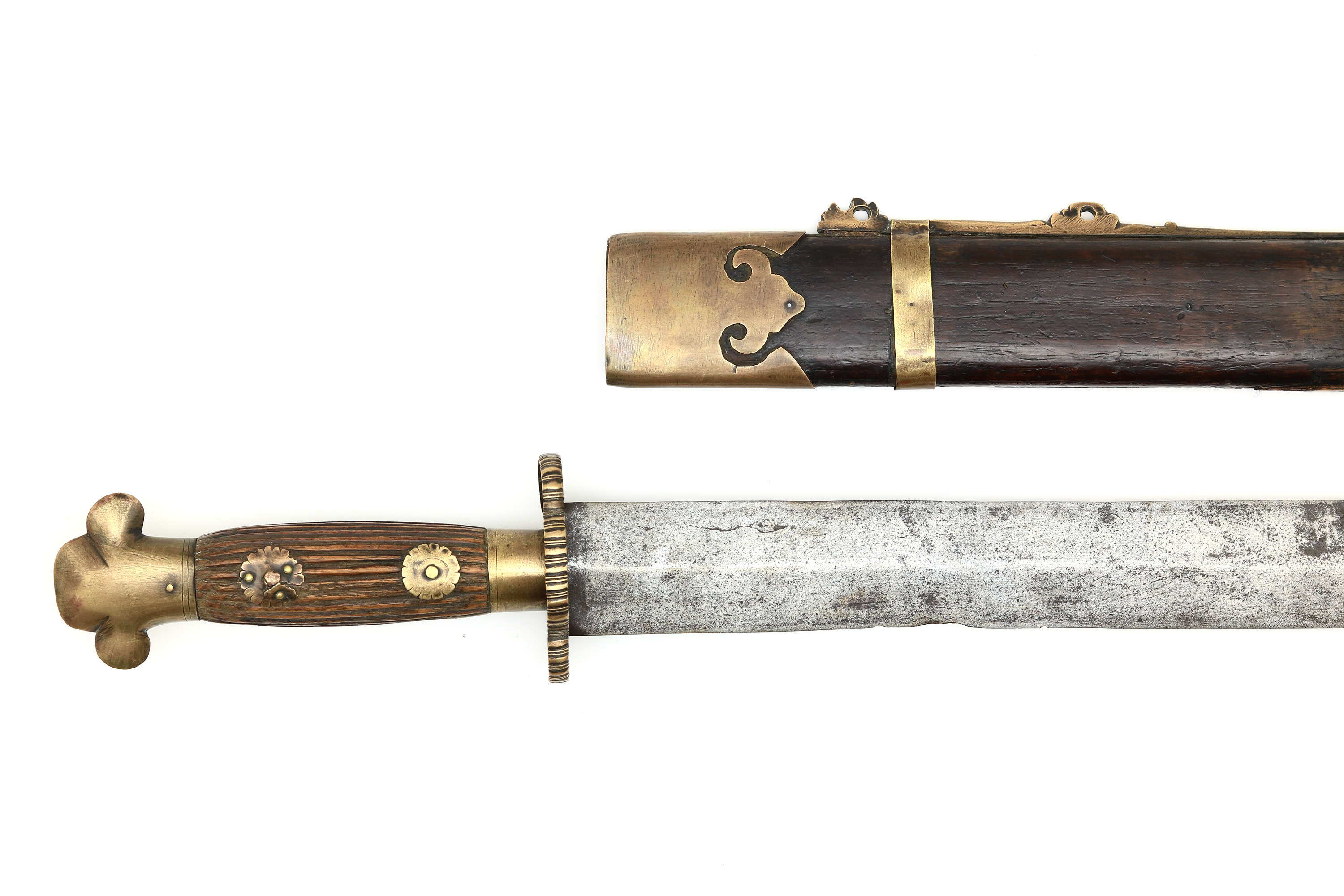 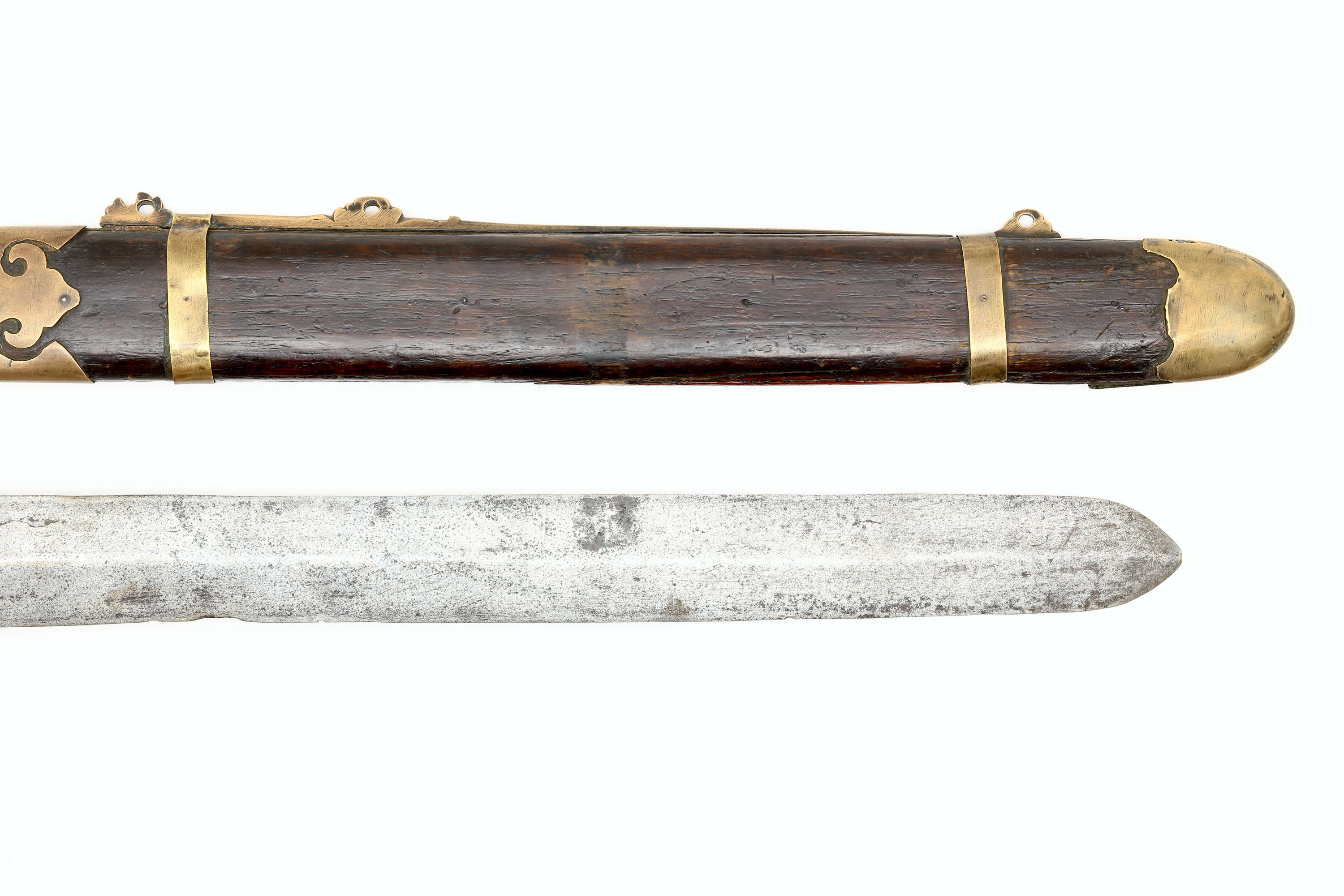 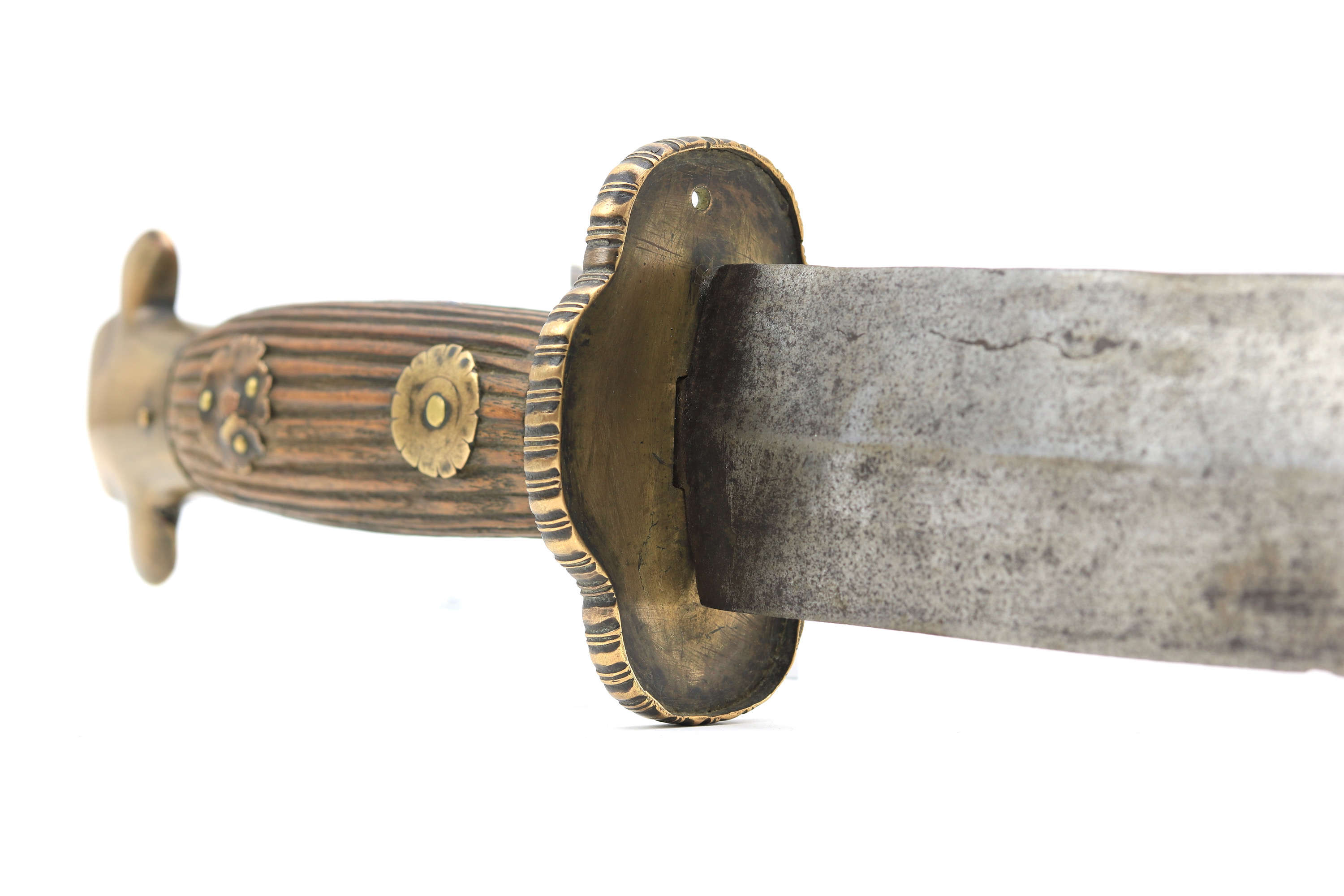