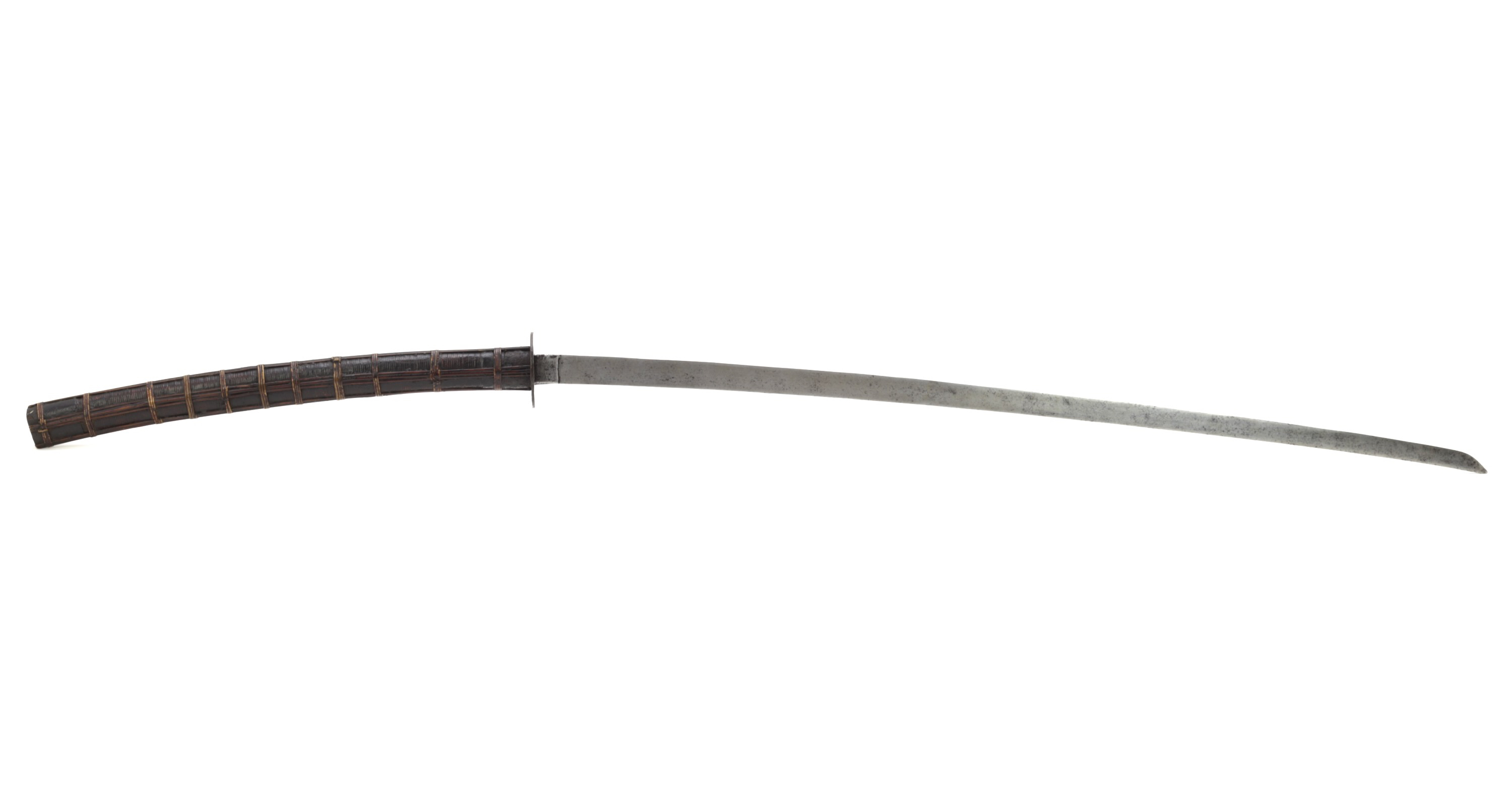 An extremely long Asian saber, modeled after the Japanese ōdachi with which Japanese pirate bands famously raided the coasts of China. As a response, the Chinese also started to produce them in the 16th century, and they remained in use in the armies of the Ming and Qing, lasting well into the 19th century.

Various Southeast Asian cultures also adopted their use, either inspired directly by the Japanese or by the Chinese.

A very large two-handed saber that almost handles like a pole-arm due to its size. Blade has a gentle curve that continues into the handle. The hilt curve is actually somewhat accelerated, something we mostly see on earlier two-handed sabers.

The blade has a wedge-shaped cross-section and a flat spine. At the base is a thickening, mimicking the Japanese collar pieces on swords called habaki.

The hilt consists of an iron guard with traces of black lacquer, with two small holes drilled through it. It has a large iron ferrule, and the rest of the hilt is made of wood, wrapped with rattan. Over the rattan are strips applied lengthwise, fastened with a series of rattan bands. The whole is then lacquered.

The hilt is tight. Blade in rather good shape, with very minor edge damage and signs of sharpening. No significant pitting, and tightly forged with no flaws.

The size and blade proportions of this example are very close to the Chinese chángrèn dàdāo (長刃大刀) or "long-edged great saber," and I initially had it down as one.1 That was until collector and fellow researcher Iain Norman pointed out how this particular hilt is found in Cambodia. See this Facebook post of a gentleman, Mong Hay Lao, visiting a Cambodian family with a military background that has two of them.

Inspecting the sword again, using a magnet, I found that the tang doesn't run all the way to the pommel as would be the standard Chinese construction, but terminate near the center of the hilt. Such shorter tangs fixed with resin are more common for Southeast Asia, the connection is remarkably strong, and, dare I say it, is better than the Chinese construction that tends to start to rattle as the hilt wood dries out.

Looking at the workmanship of the blade and guard, there are some interesting elements to it. When Southeast Asian makers copied Japanese swords, they tended to use a separate, often brass collar piece. In Southern China, we commonly see iron or steel collars being chiseled from the base of the blade or welded to it, as is seen here. The black "fire lacquered" iron mounts with circular holes, mimicking Japanese hitsu-ana, are also something often seen on the large Chinese two-handers.

These swords are generally thought to be copied from the Japanese ōdachi, but in this case they seem based on the Chinese interpretation of the ōdachi instead.

Chinese presence in Cambodia has been noted since antiquity, with traders being active in Angkor from at least the 13th century.2 In the 16th century, the famous Chinese pirate Lim To Khieng operated from Cambodia, raiding the Chinese coastal areas from there until he moved to Taiwan.

Phnom Penh was a bustling trading city with a population of about 20.000 souls, of which 3000 were Chinese in 1606.3 During the remainder of the 17th century, many former Ming soldiers fled Southern China as the last Ming resistance crumbled. There are numerous accounts of former Ming soldiers fleeing Southern China and settling in the area, pledging allegiance to local rulers.4

One such figure was Mac Cuu, a Ming patriot from Hainan who arrived in Oudong in 1657 at the age of 17. He built up a trade empire and founded the port city of Ha Tien, which would become the main trade port for Cambodia in the 18th century. In 1859, Henry Mouhot visited Phnom-Penh and reported a town of 10.000 people, almost all Chinese.5

In this light, it is not hard to imagine how the Chinese interpretation of a Japanese sword used among pirates in the 16th century made it all the way to Cambodia.

A very large Cambodian two handed saber. It was either wholly produced locally, based on imported Chinese examples, or (partially) made by Chinese craftsmen. They could have worked locally, but the blade could also have been imported.

Their use was probably initially by Cambodian based Chinese pirates and Ming soldiers who fled the Qing conquest, and saw adoption by local military as well.

Looking at the overall shape, with the deep curve in the hilt, I feel a 17th or 18th century dating is not unreasonable.

Notes
1. The Qing military pattern chángrèn dàdāo is overall 178.5 cm, blade 112 cm, with a blade width at base of 52 mm and an overall weight of 1920 grams. See Qīndìng Gōngbù Jūnqì Zélì (欽定工部軍器則例) or "Imperially Commissioned Regulations and Precedents of Military Equipment for the Board of Works" of the 13th year of Jiaqing, 1808. It describes the construction of the chángrèn dàdāo as it first appears in the Huángcháo Lǐqì Túshì (皇朝禮器圖式), or "Illustrated Regulations on the Ceremonial Paraphernalia of the Dynasty" of 1766 which in turn is based on an unnamed palace manuscript from 1759.
2. W. E. Willmott; History and Sociology of the Chinese in Cambodia Prior to the French Protectorate. Journal of Southeast Asian History, March 1966, Vol. 7, No. 1. Published by Cambridge University Press on behalf of the Department of History, National University of Singapore. Page 18.
3. B.P. Groslier; Angkor and Cambodia in the Sixteenth Century, According to Portuguese and Spanish Sources. Orchid Press, 2006. (Reprint from the 1958 French-language original.)
4. Willmott. Pages 25-26.
5. Willmott. Page 27. 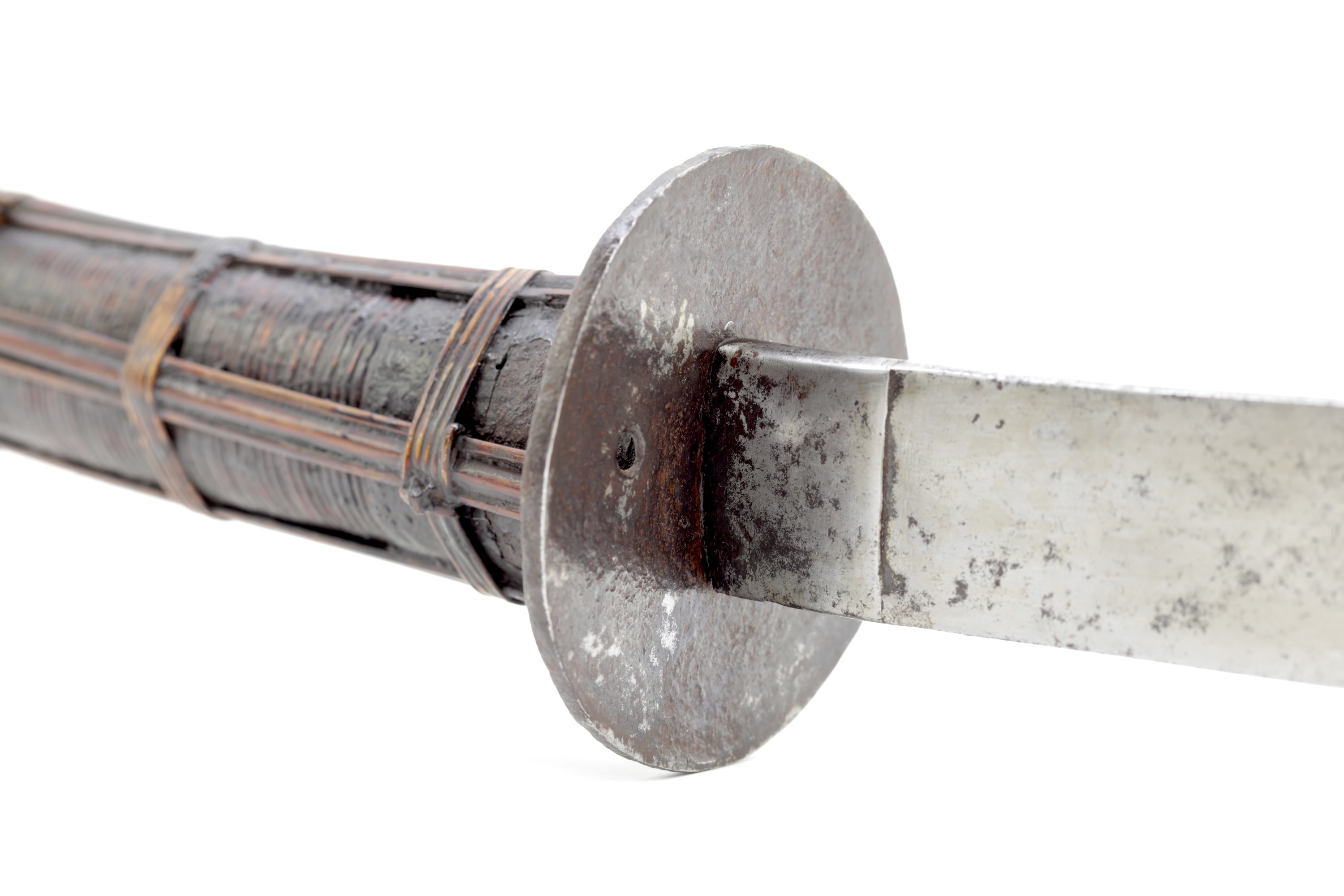 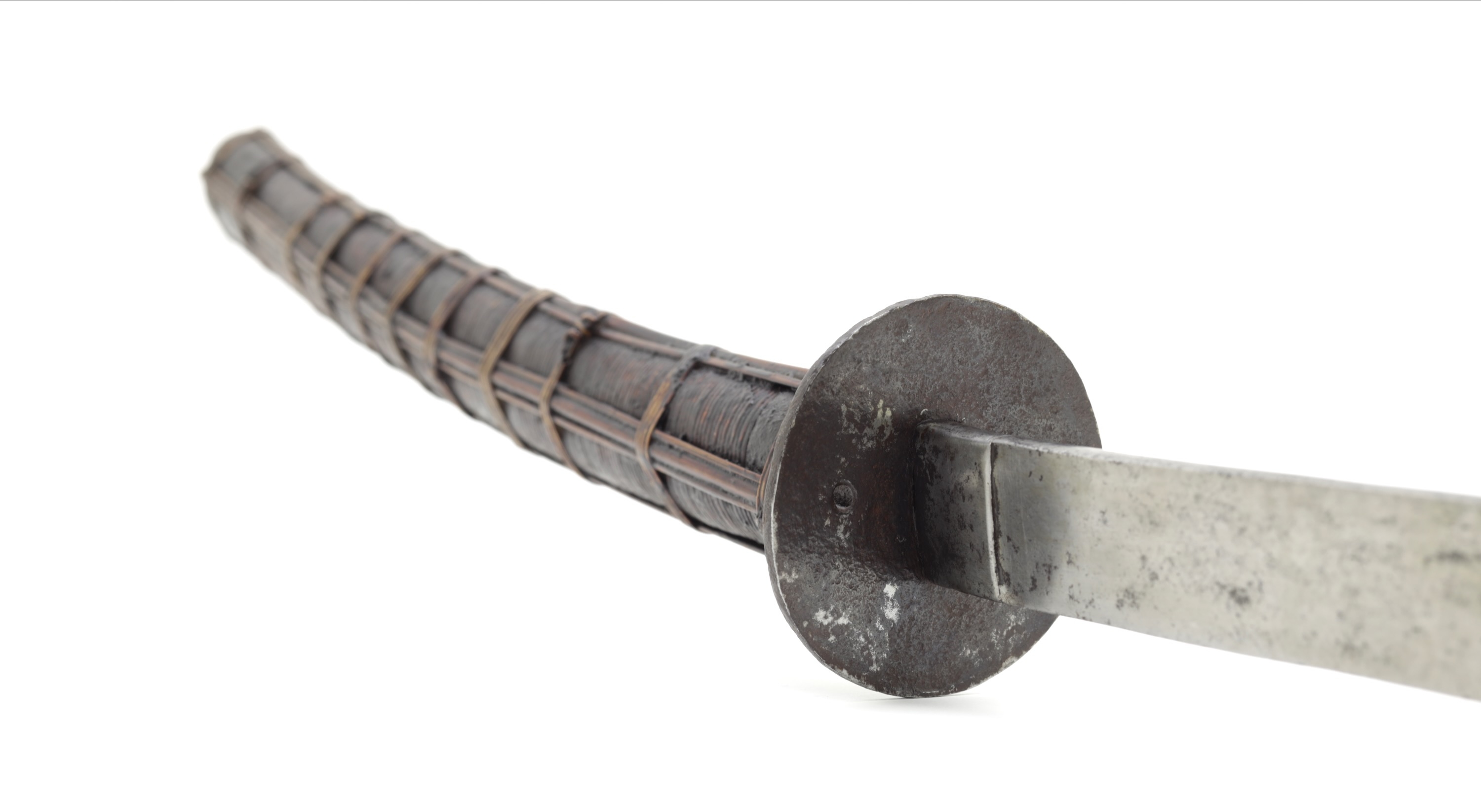 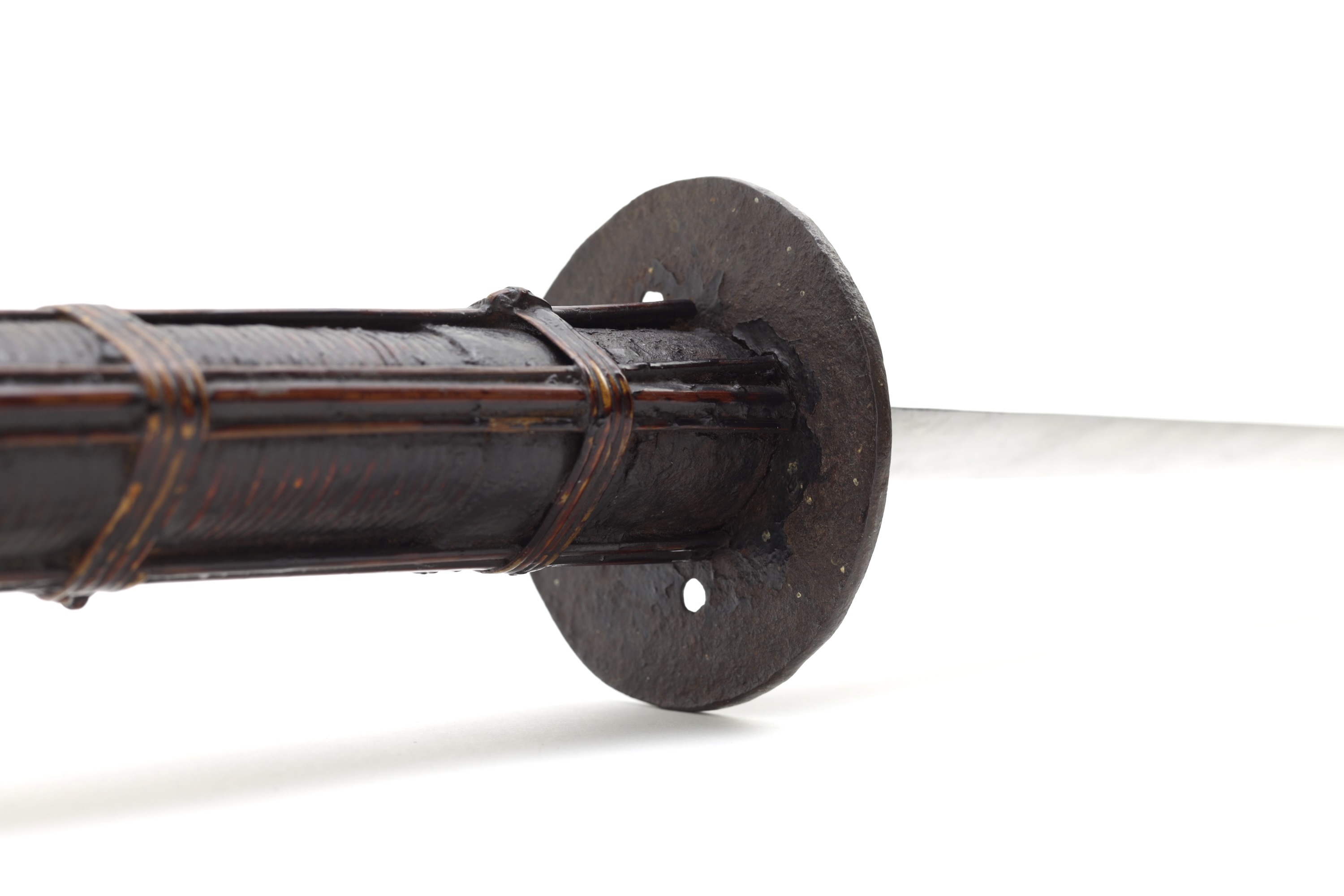