A very rare type of Burmese combination weapon that is perhaps best described as a "sword carbine". It consists of a short barrel with a long stock that doubles as the scabbard for the sword. When the hammer is cocked, the barrel can be pulled out, now serving as the hilt of a short saber.

The edge of the muzzle and a sight are of polished brass. The blade is of typical dha shape. Left in original condition but we can still make out that the blade was forge folded with a straight grain pattern and there is a prominent heat-treated area along the edge. The piece has clearly seen action, as a number of stress cracks in the edge attest for the hardness of this area.

The cracks end where the heat treatment made the steel milder and tougher, showing the construction did exactly what it needed to do. Scratches near the edge section are probably from field sharpening.

The stock / scabbard is made of two halves of light brown hardwood, fitted with brass sheet mounts. The iron lock and hammer are local imitations of those found on British Enfield 1853 pattern muskets that were in use between 1853 and 1867. The maker not being familiar with English, the words "Tower" and "Enfield" are replaced with non-existing lettering and the crown bears only a vague resemblance to an actual crown. The lock is nonetheless fully functional and works as expected.

The stock has two loops, probably once used for a sling. The piece is complete with a ramrod that is also modeled after that of the British Enfield 1853.

There is a 1907 mention of such guns in an old monograph:

In the Shan States, and doubt-less in the Chin Hills, guns are still made; manufacture of the old fashioned flint-lock has nearly died out; and the modern product is usually a muzzle-loader with a nipple and cap, terrible to look at, but handled courageously by the Shan owners. In the hill districts of the Hsam-Tao (Southern Shan States), the villages of Wi Pyu and Pang Yung live by, gas-pipe" flint-lock guns and pistols, and imitation "Tower" muskets for percussion caps.

The barrels are made of solid' bar iron imported from China, the bore and touch-hole are drilled in the rough, and the superfluous weight of metal is worked down on a grind-stone until the barrel is round and polished. A rough stock is affixed first, and shaped later: the lock (of a flint-gun) comes last of all: these, with the hammers and springs, all come from China. The guns fetch Rs. 6 to Rs. 25 in Kengtung Town.

There is also a fancy pattern of horse-pistol with a scabbard-shaped stock, the barrel being used as the handle: the blade can be withdrawn when the gun is cocked; but the descrIption reads as that of a weapon of doubtful utility.1

We can conclude from the text that the author had not actually seen or handled one. The field sharpening and edge damage on this current example suggests that despite Bell's reservations, it was a fully functional weapon that was put to use.

Preserved in beautiful original condition, no losses or repairs. Some cracks in the sheet brass, and some cracks in the hardened edge. All "of the period", no recent damage. No rust or pitting on the iron parts.

A rarely seen type of Burmese combination weapon of which only very few have survived. A cross over between edged weapons and firearms, it will make a nice addition for any collection that seeks to represent a complete overview of Southeast Asian arms. 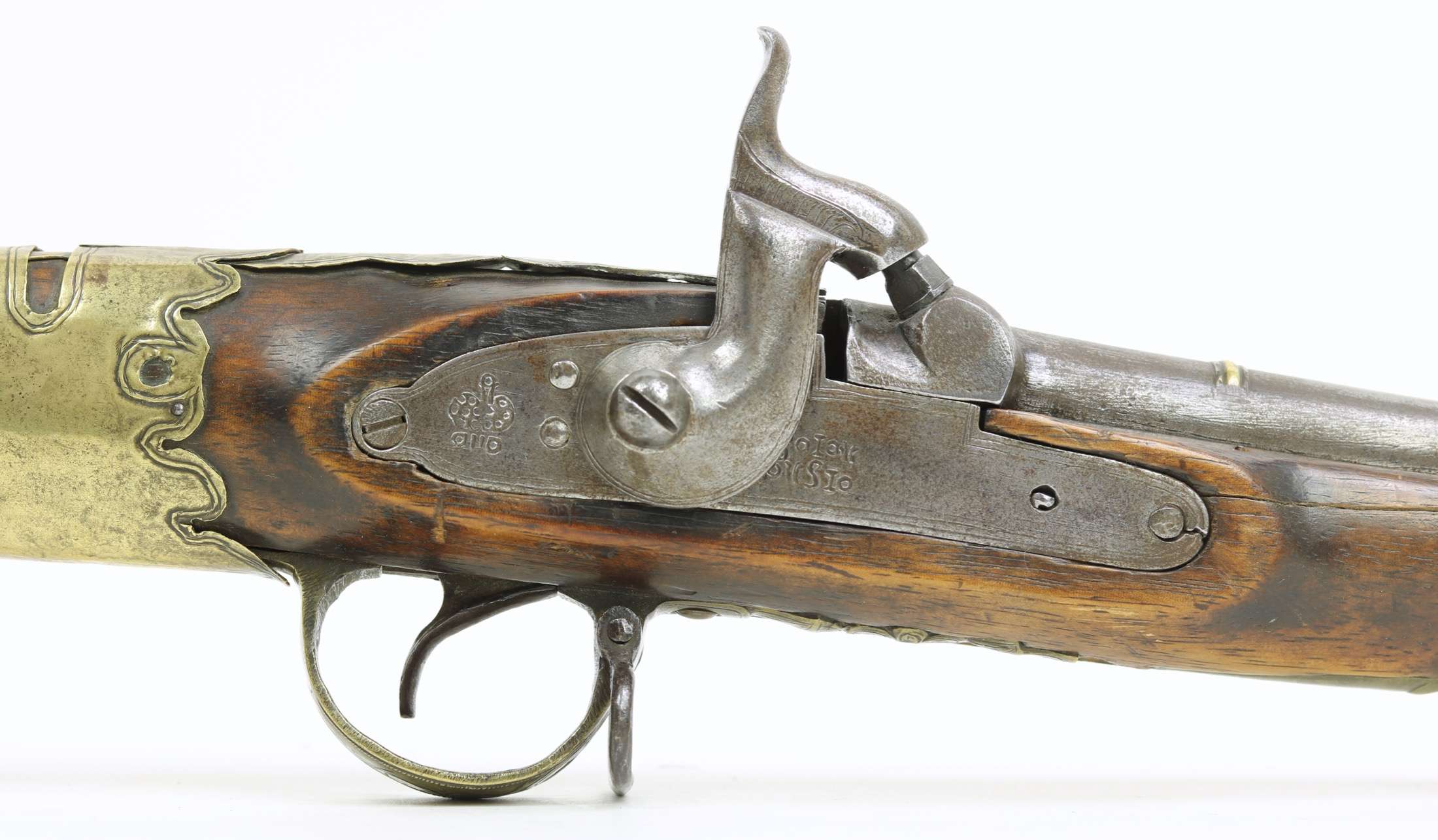 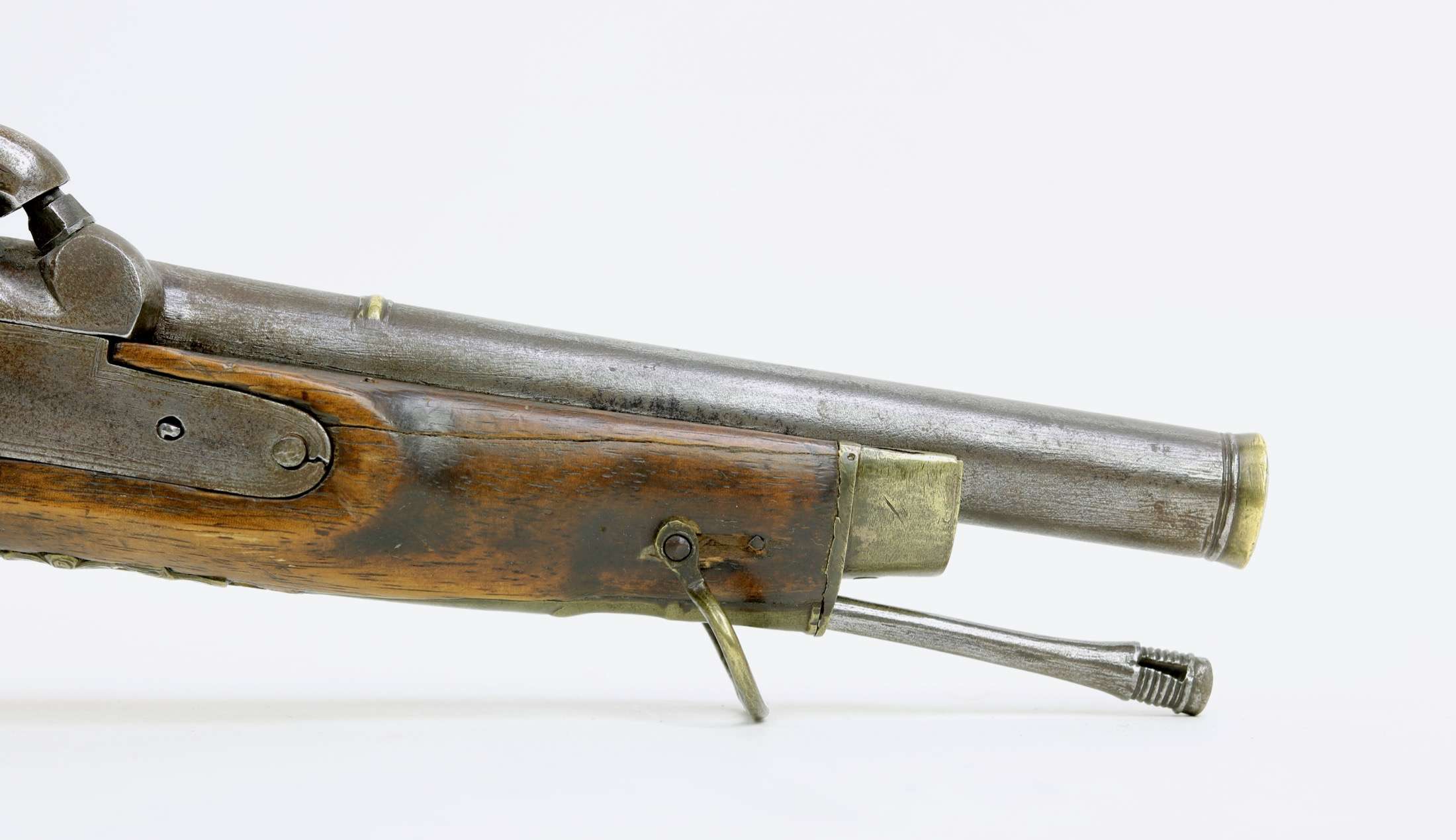 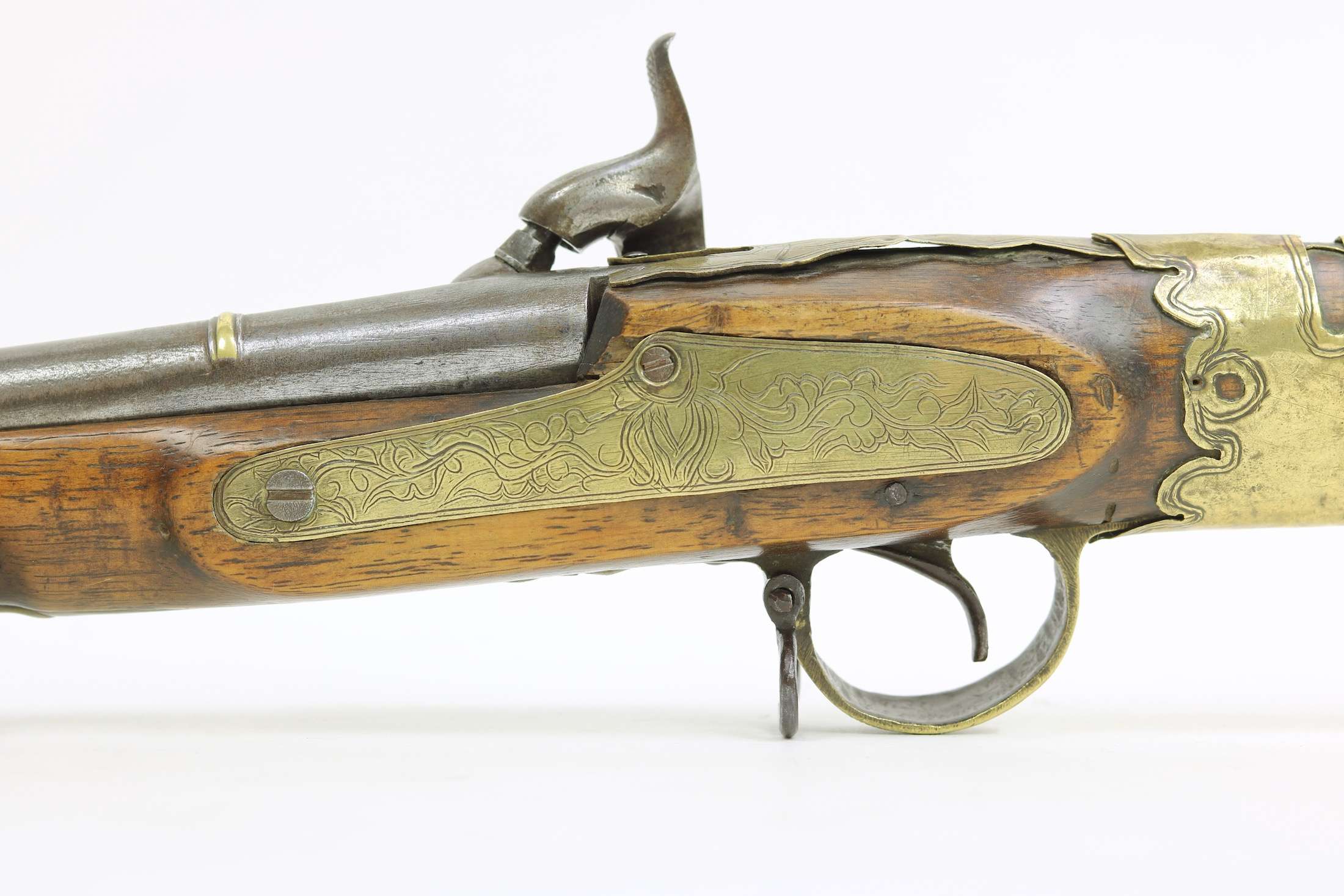