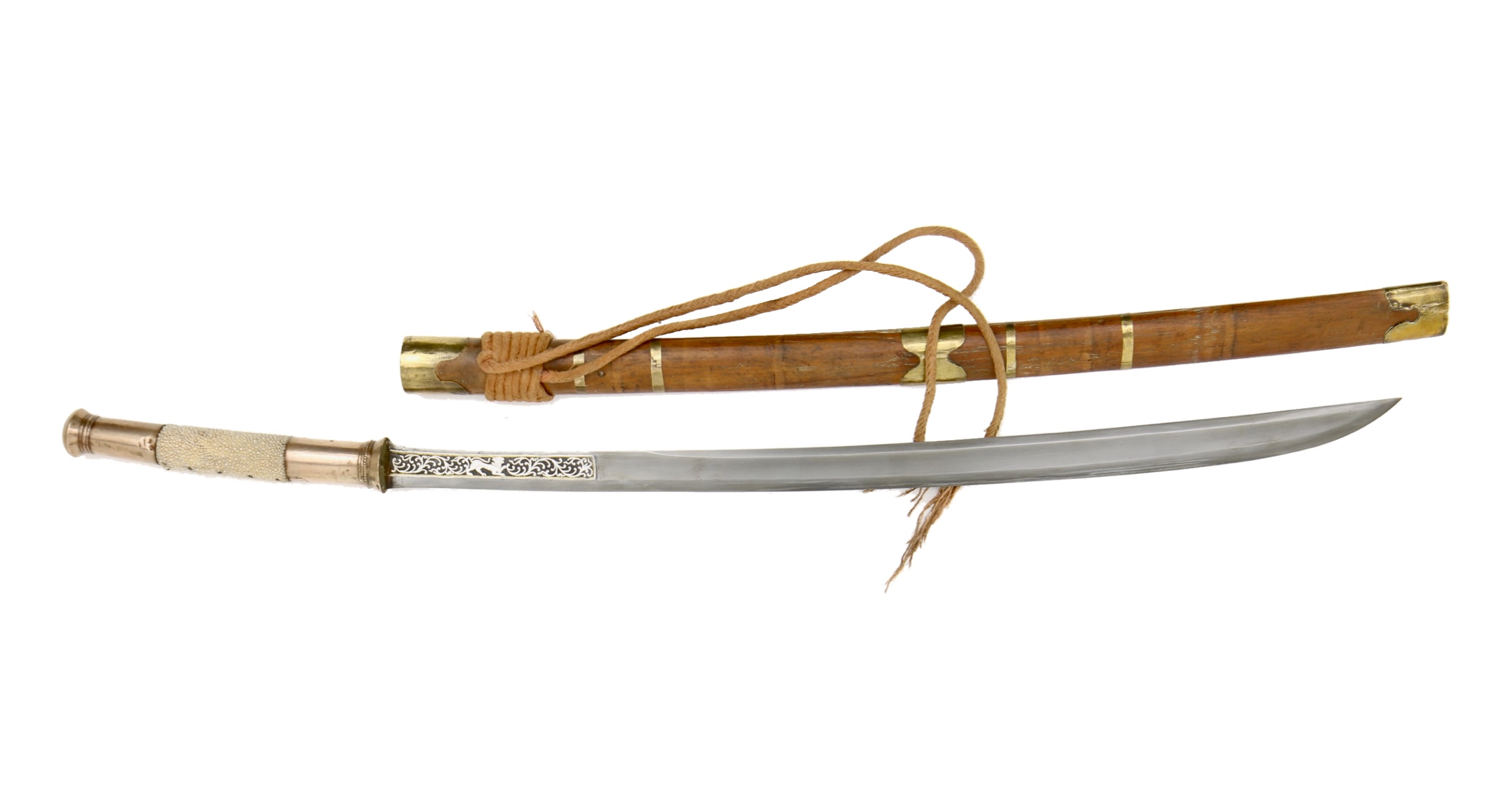 The Burmese dha was produced mainly by the Shan, who often worked as itinerant smiths spread over Burma and Yunnan. A formidable weapon, it was used for anything from cutting through the jungle, felling trees and of course waging war.

"Every Burman carries his dah. This implement or weapon serves a variety of purposes from that of a knife and sword to those of an axe. It is used alike for felling wood, carving or cutting up fish, or driving a post; and is at all times a dangerous weapon of offence as well as of defence.

Heavy-backed and sharp-edged, the Burman carries it over his shoulder as he walks along. He is impressionable and irascible in temper; his passions are easily roused; and one or two cuts inflicted during a fit of rage are sufficient to destroy the life of whoever at the time falls under the violence of his temper.

Each particular class in Burmah seem to have their distinctive form of dah; of each form there are many varieties, and it is said the weapons are often handed down as heirlooms in a family." 1

A rather nice example given its age, with a lot of design features that hark back to earlier work. The blade is well-made and of good steel, with subtle signs of differential heat treatment along its edge, similar to a hamon on a Japanese sword. The blade is of typical form, flaring out gently towards the tip. It has a hollow midsection and a long back bevel.

The base of the blade is decorated on both sides with copper alloy and silver overlay on a black crosshatched background. The framed design contains floral scrollwork with a tiger in the center.

The base of the spine is decorated using the same techniques, this time with lines of silver, framing a meandering pattern of copper alloy. At the very base is a date, 1290 in the Burmese calendar, corresponding to 1928 in the Gregorian calendar.

Hilts on these are normally made of wood or iron covered with sheet silver. On this one, it is a cast copper alloy, with a fairly high copper content making it reddish in color. In a way, it is like bronze, but it does not seem to tarnish like bronze. The grip section is covered with ray-skin, secured in place with nails.

The scabbard is of typical form, with brass mountings vaguely reminiscent of the Chinese style. Multiple bands help reinforce it. comes with a baldric made of thick faded red cotton.

In very good condition throughout. Two very small cuts in the edge near the base, possibly from another blade. Philip Tom polished the blade.

A nice example of a Burmese dha from 1928, with some minor departures from the traditional construction. The date on the blade enables us to compare it to others and further fine-tune our idea of dating these dha.

Notes
1. Sir Charles Alexander Gordon, Our trip to Burmah. With notes on that country. Baillière, Tindall, and Cox, London, 1877. Page 186. 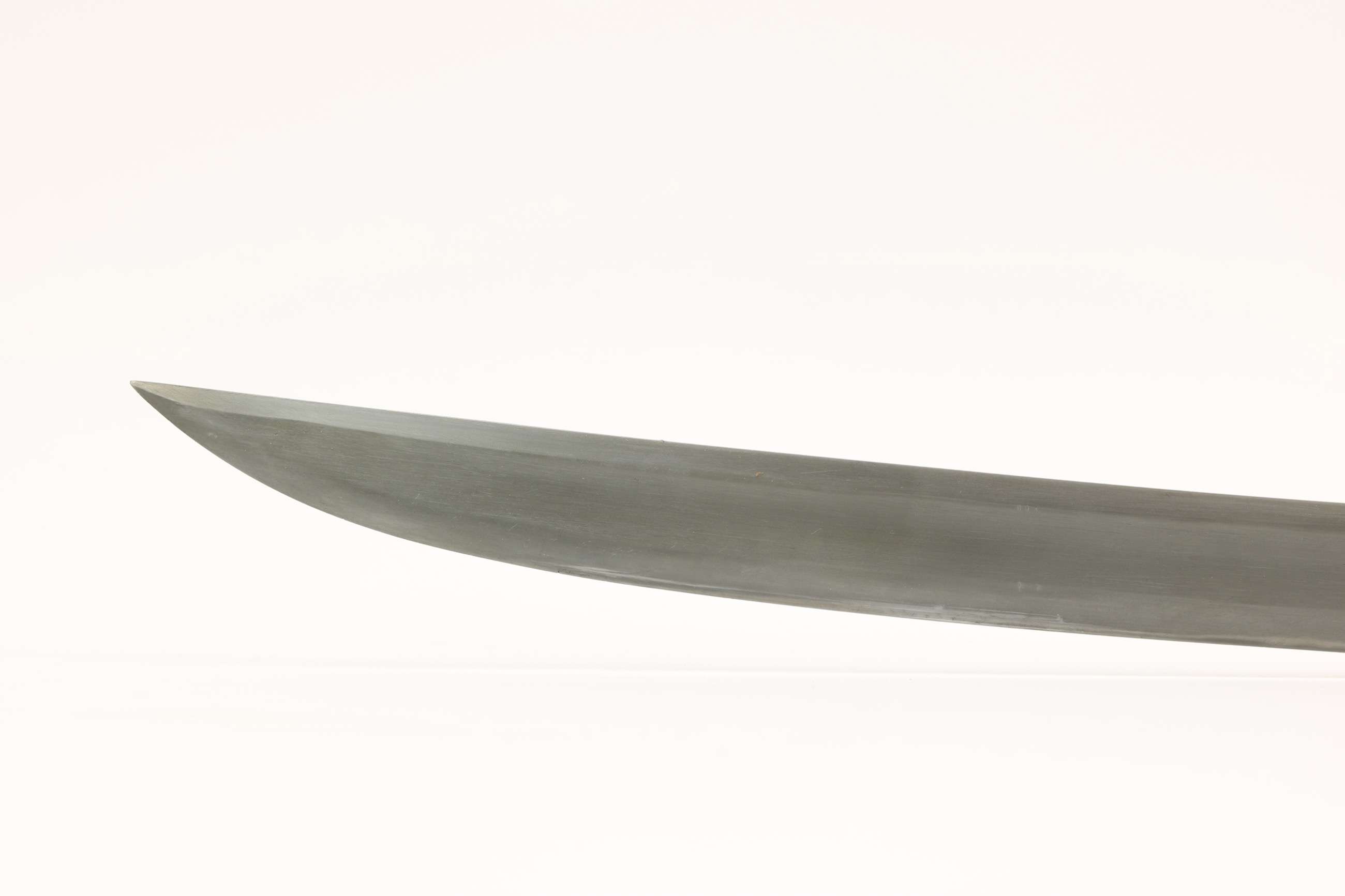 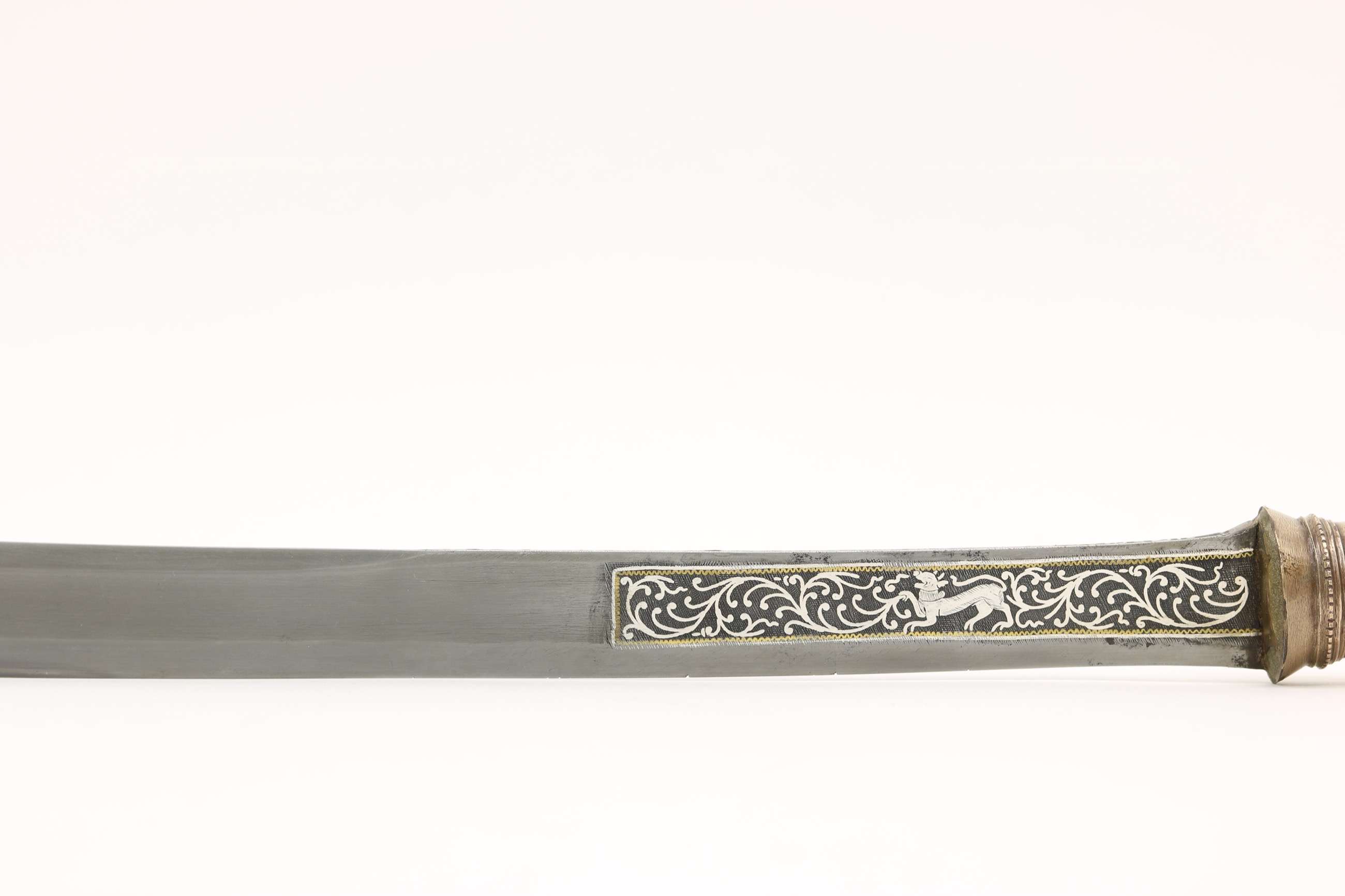 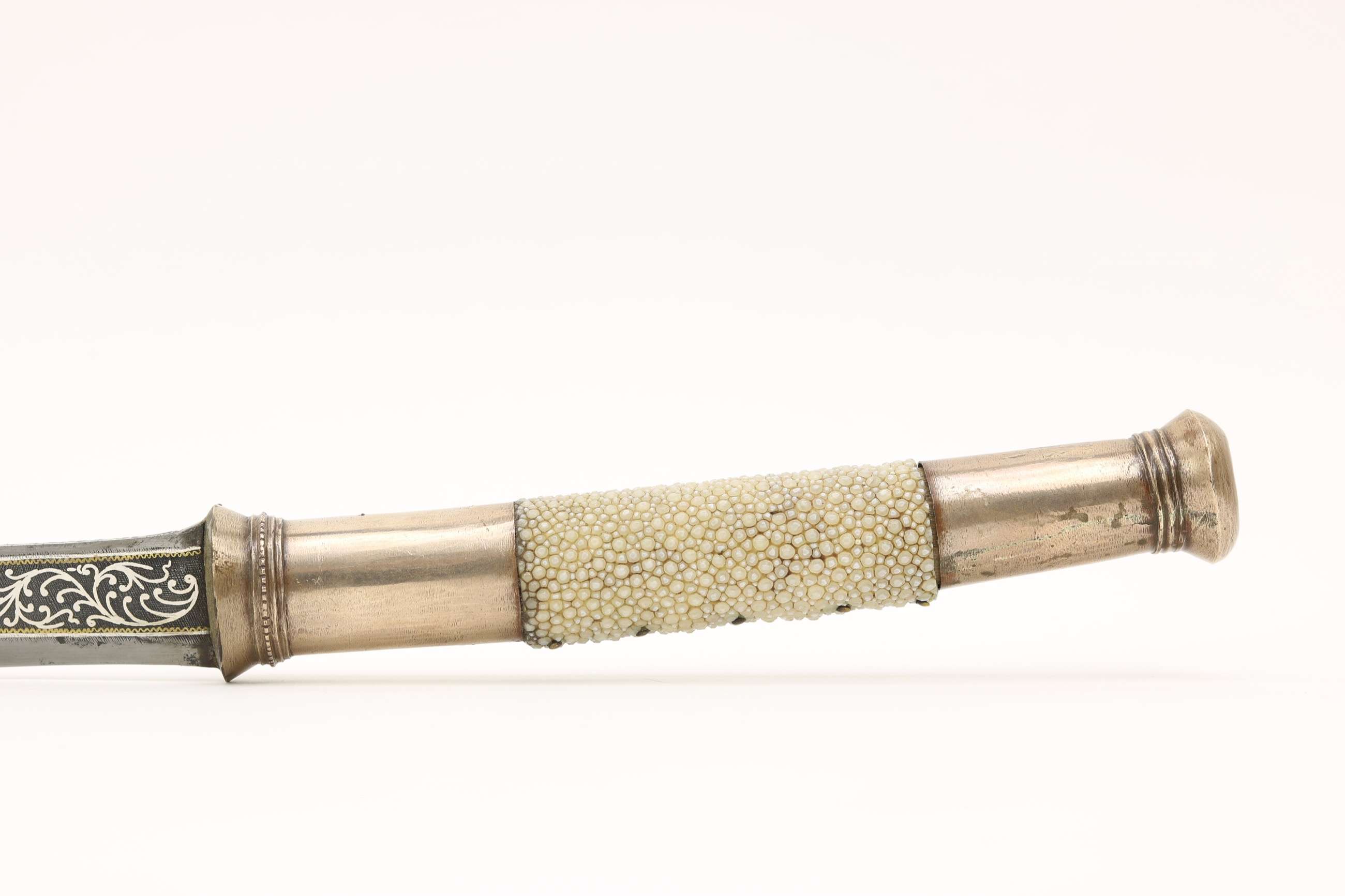 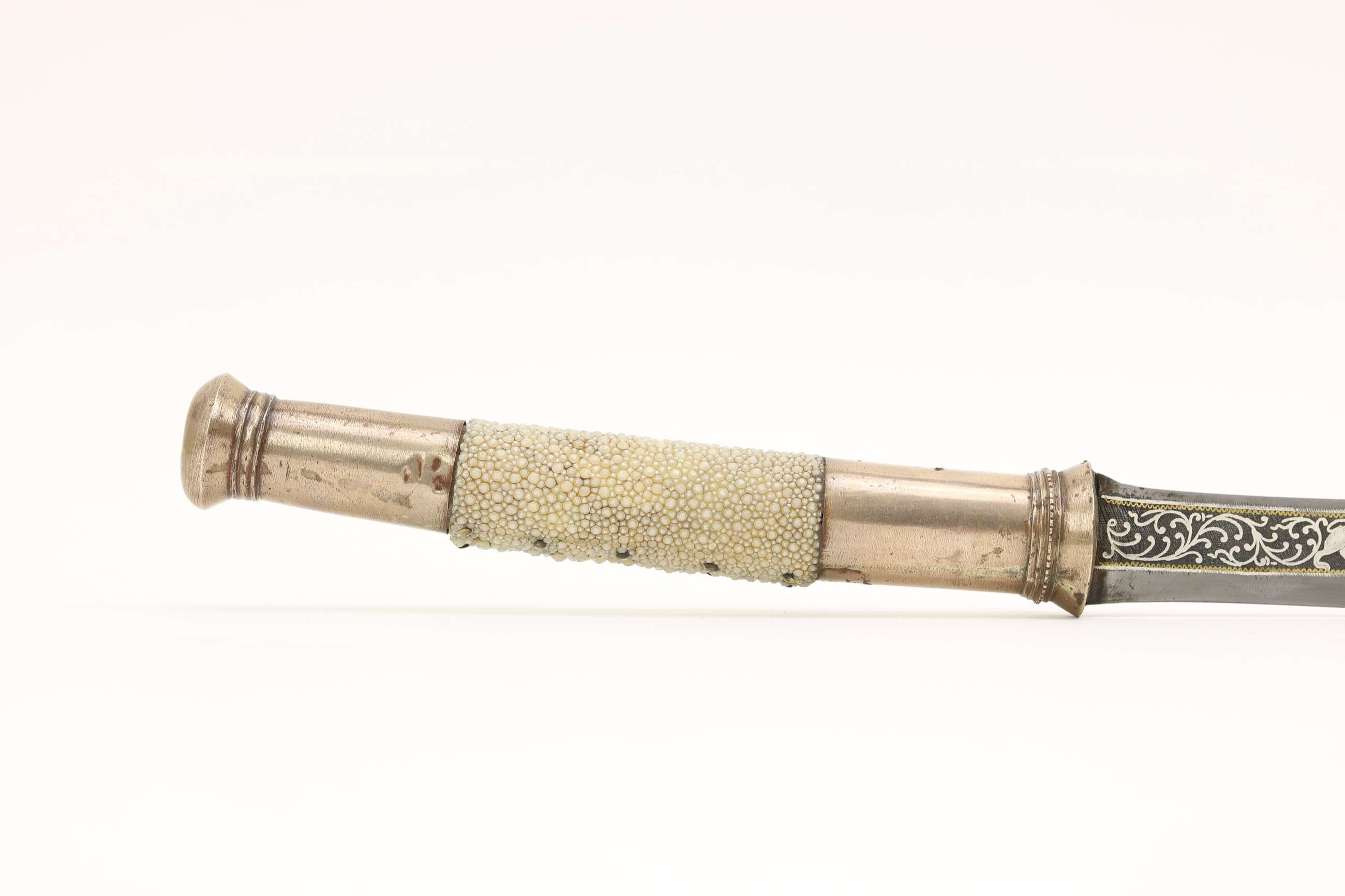 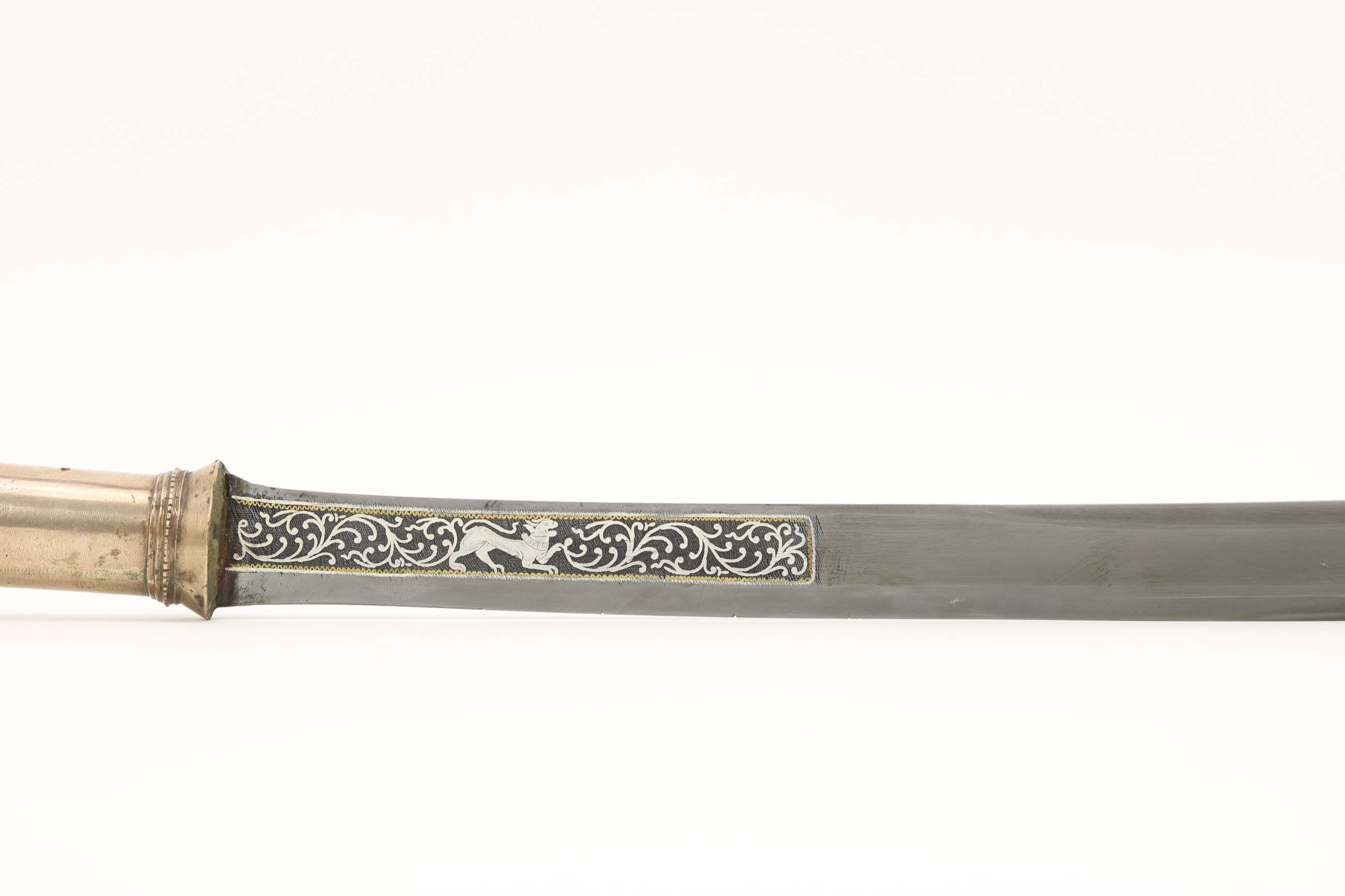 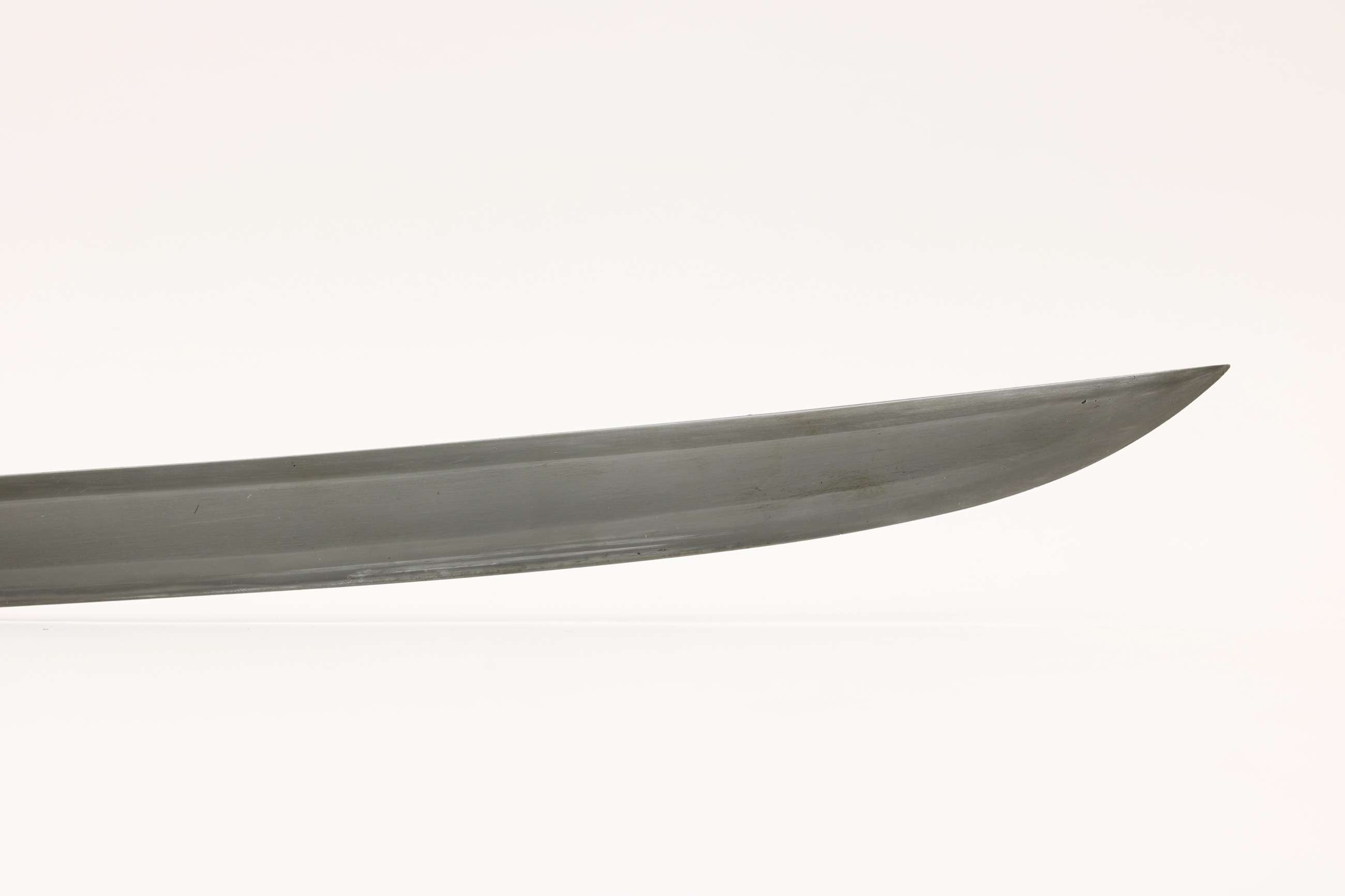