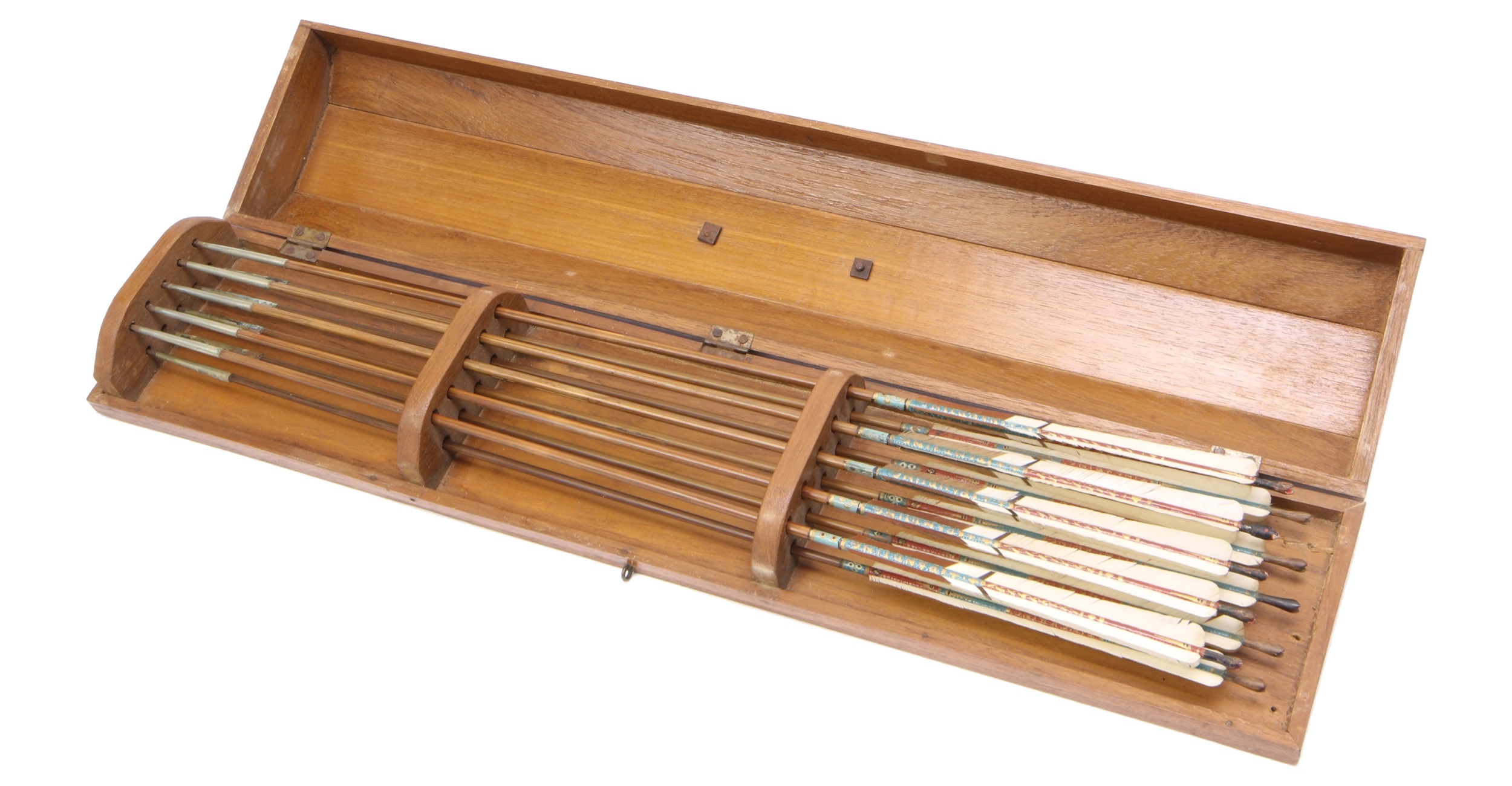 This item has been sold.
Read full article
Dimensions of box

In the palace or keraton of Yogyakarta, a traditional form of archery was practiced called Jemparingan. Its origins were thought to lie in the Sultanate of Mataram which lasted from 1587–1755.

These are the bow and arrow (gendewa / pana) which are seldom used in modern times except on state occasions.1

It was a form of target archery that was practiced while sitting cross-legged, facing the target, with the bow held horizontal. It endured in small circles until recent times, with some adjustments.2

The below drawing was made by Wolfgang Barti based on a written description of the old sport.3 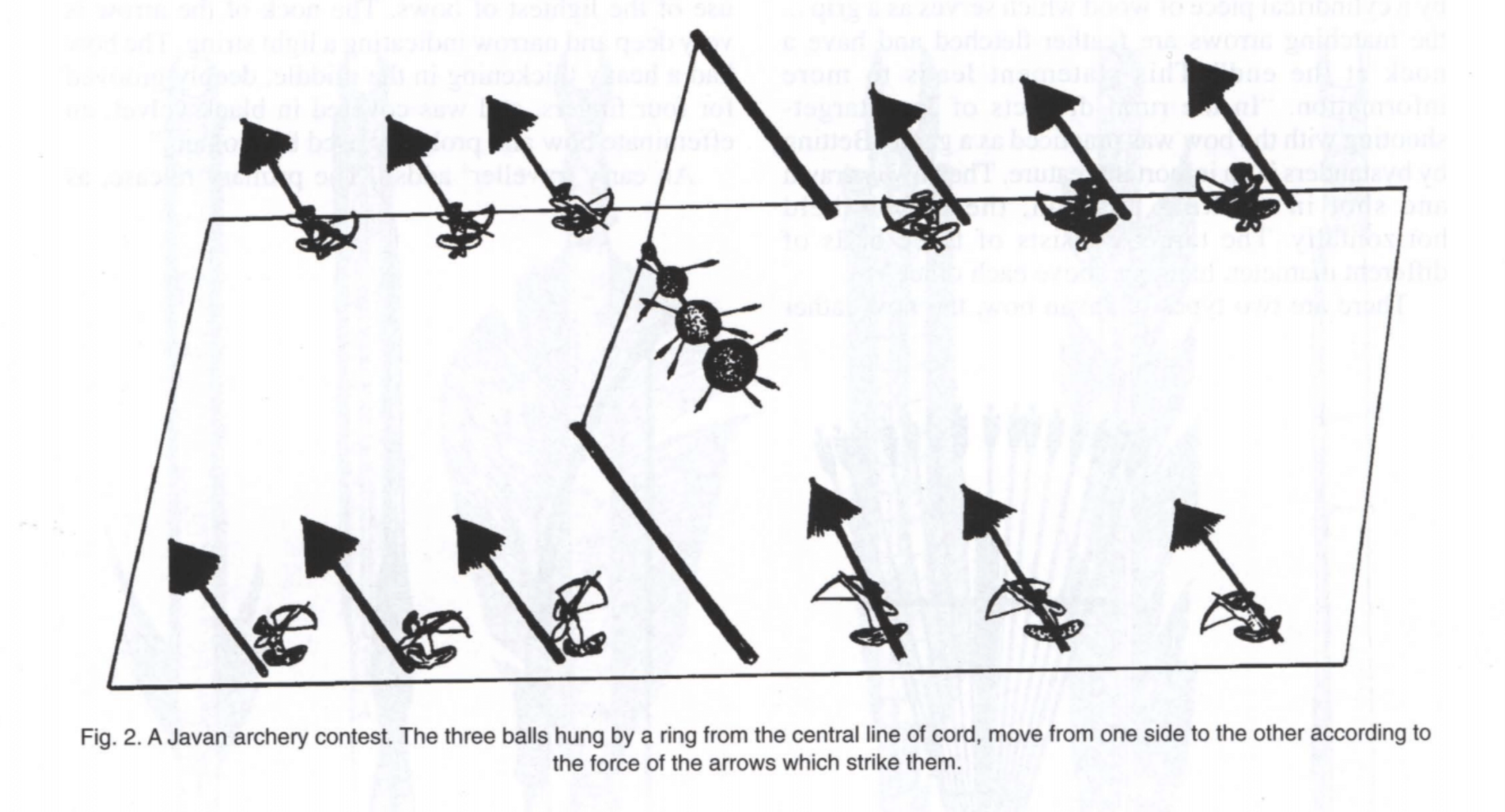 Illustration from "A Javanese bow and arrows" by Wolfgang Barti.
Journal of the Society of Archer-Antiquaries 1998.

Notes to introduction
1. Thomas Stanford Raffles; The history of Java. Vol 1. Page 295.
2. See: Pradana Pandu Mahardhika; A Tantalizing Glimpse into the Past: Traditional Archery Competitions in the Yogyakarta Palace. 2000. ATARN.ORG.
3. Wolfgang Barti; A Javanese bow and arrows. Journal of the Society of Archer-Antiquaries 1998. Pages 57-58.

Consisting of a well-made wooden box with facetted top, fitted copper hinges and a brass carrying handle. Inside are two sets of five arrows each, making a total of ten arrows. They all have small slender iron tips of round cross-section, reinforced with a long metal sleeve, possibly of báitóng.

The shafts are all made of splitcane, a method where strips of bamboo are glued together to form a strong, solid shaft. The work is so well-done that it is hard to make out the individual strips but it seems they are made of at least six strips each.

The feathers are wrapped with sine silk thread after which the tail ends were lacquered different colors. Most of the nocks seem to have been made of palm wood, but there is one with a horn nock and another nock shows a working-life repair.

The arrows in the first set are slightly shorter than the others. They are fletched with white feathers, with pieces of brown feather spliced in so each vein consists of 4 pieces, making a total of 12 pieces of feather per arrow. The cresting was done in black, blue, gold and red paint. On each shaft is written in gold lacquer the word:

The arrows of the second set are slightly longer and with a lower feather profile, suggesting they were made for a longer distance kind of shooting. The cresting was done in a similar color scheme, but of a slightly different design. On each shaft is written in gold lacquer the word:

Some damage to the right side of the box, including a split in the bottom. Some corrosion on arrowheads. Shafts and feathers in very good condition. One period repair to a nock.

Are very rare but there is a very nice set in Musée du quai Branly under accession number 71.1900.52.1.1-27. It consists of a decorated box containing a take-down bow and twenty arrows. It was acquired in 1900 from the Paris Exposition, and supposedly came from Prince Harjo Mataram.

A very rare set of boxed Indonesian target arrows of the 19th century that were used for target archery tournament performed in the palace of Yogyakarta. 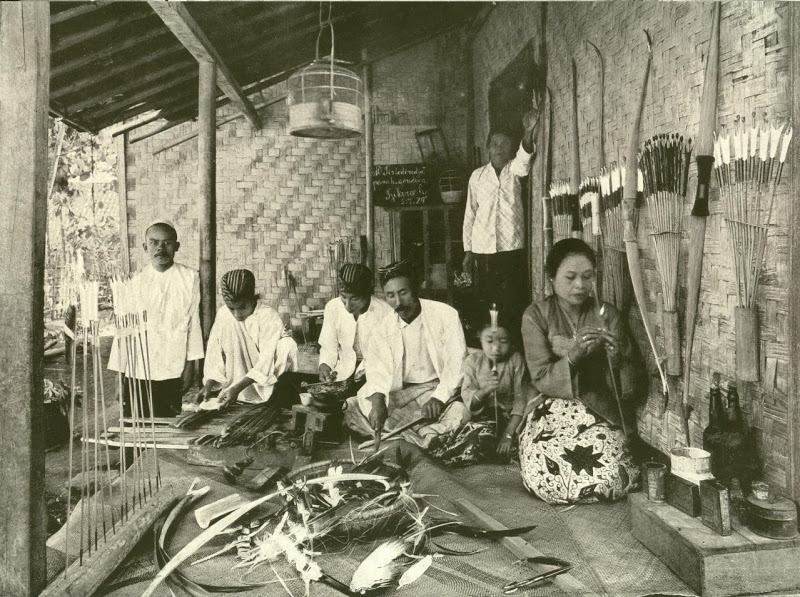 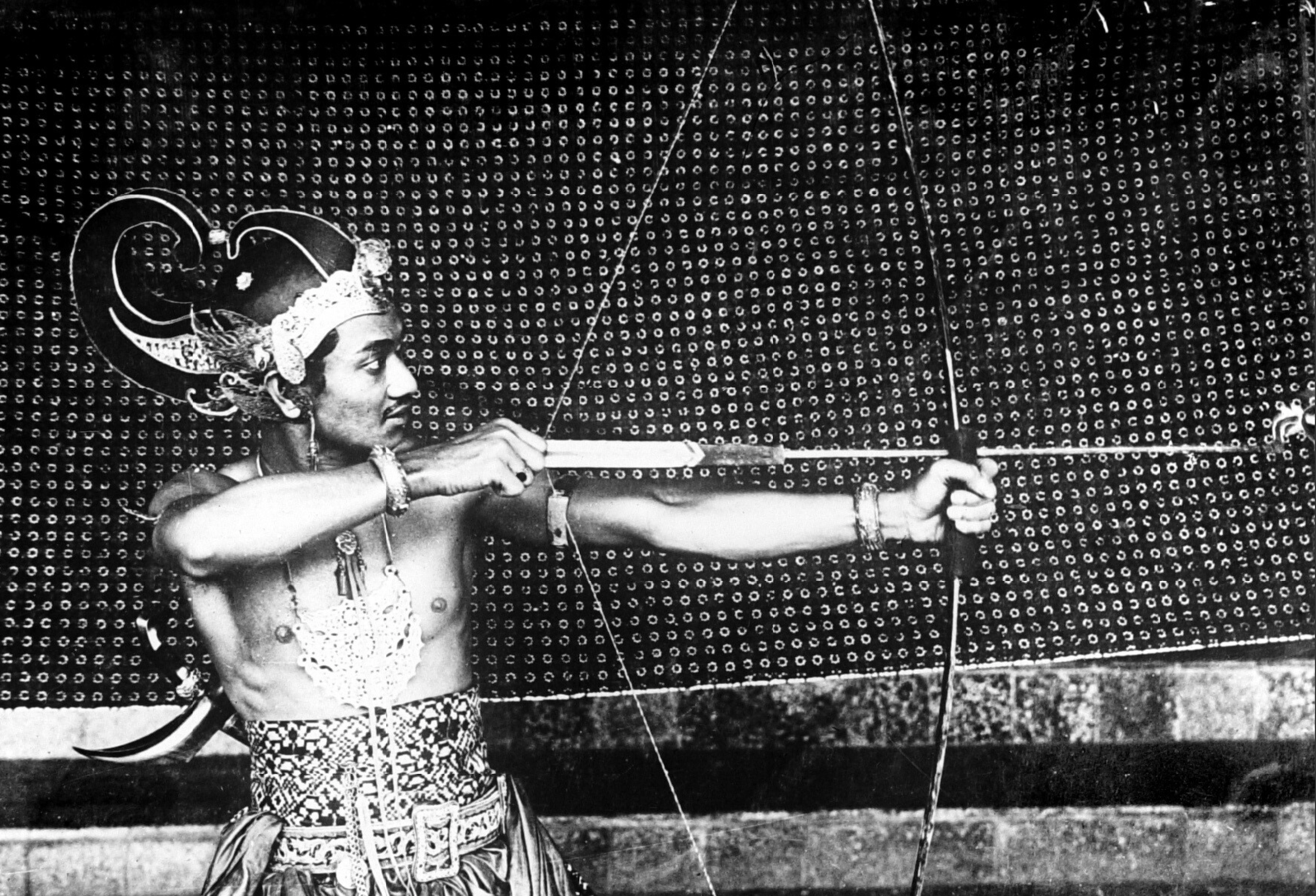 A Javanese archer using a very similar arrow as the ones presented here.
Unknown date and photographer. 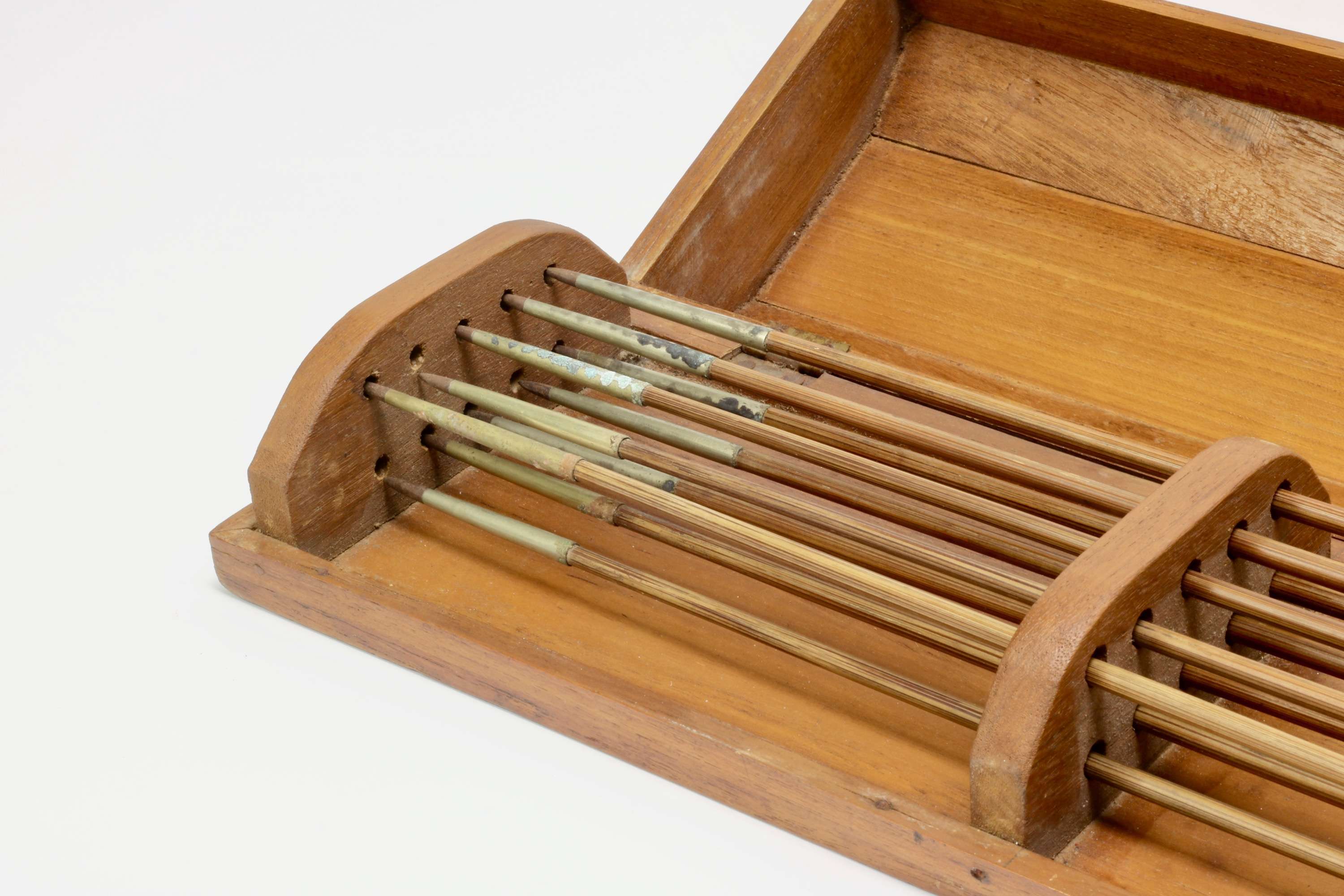 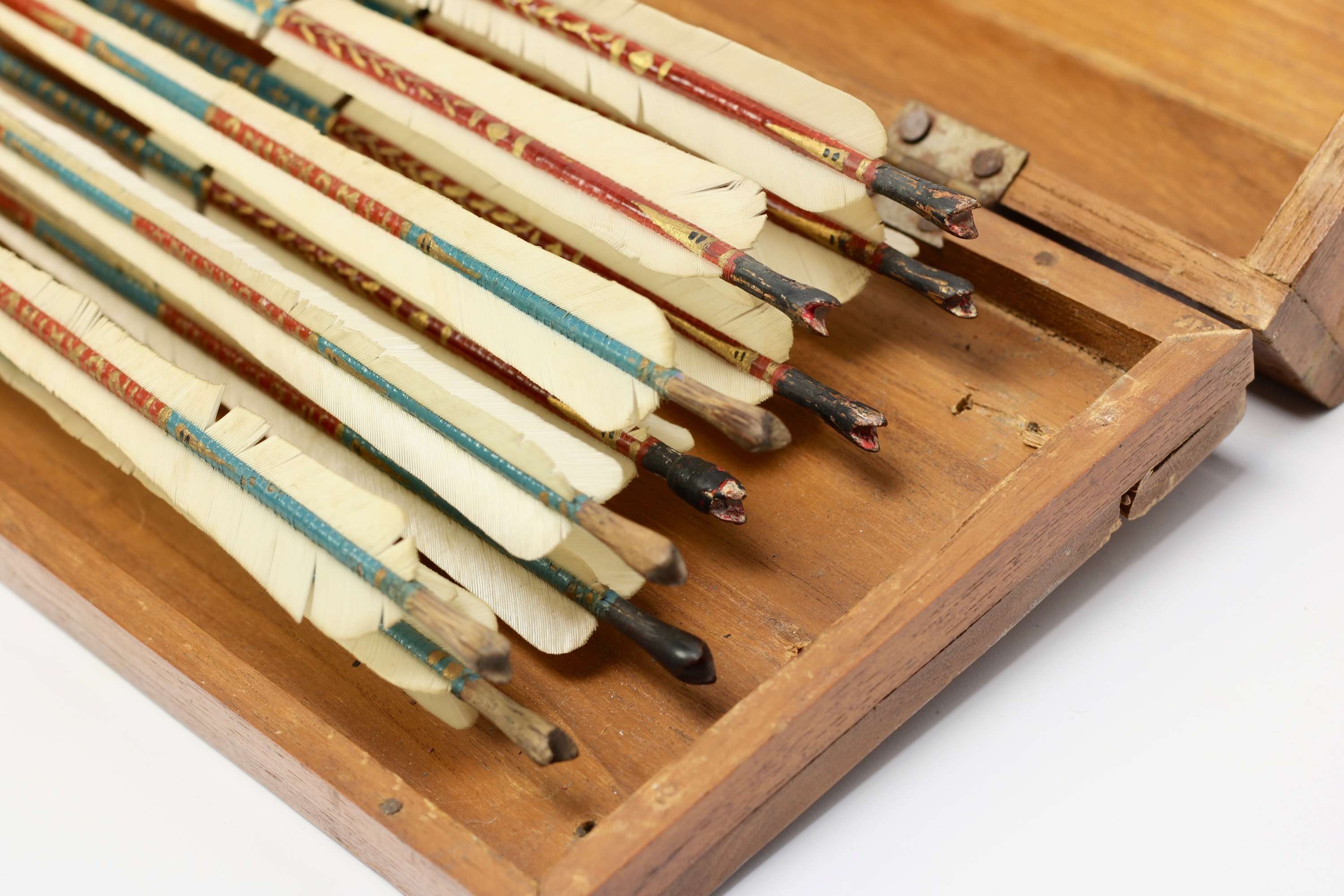 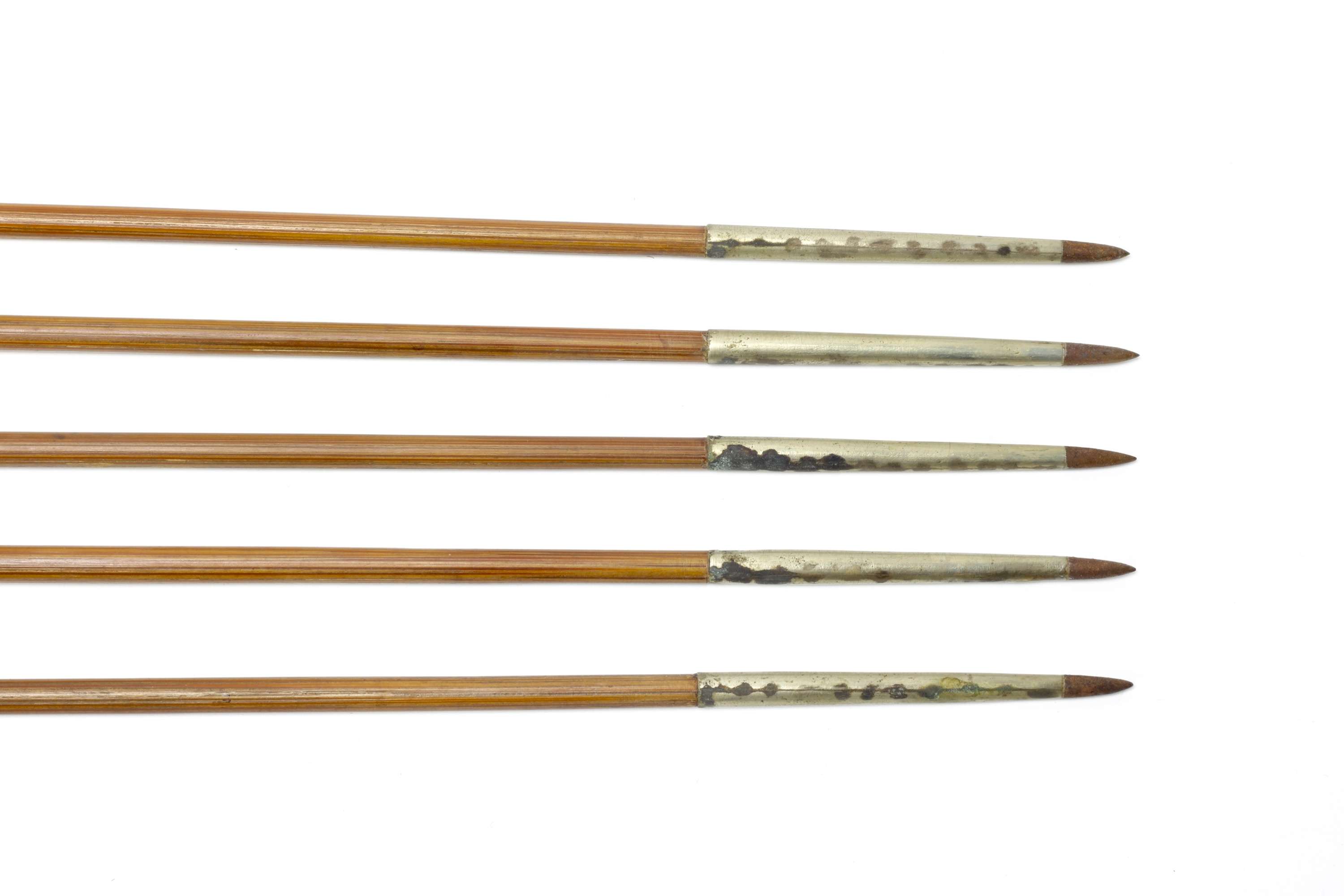 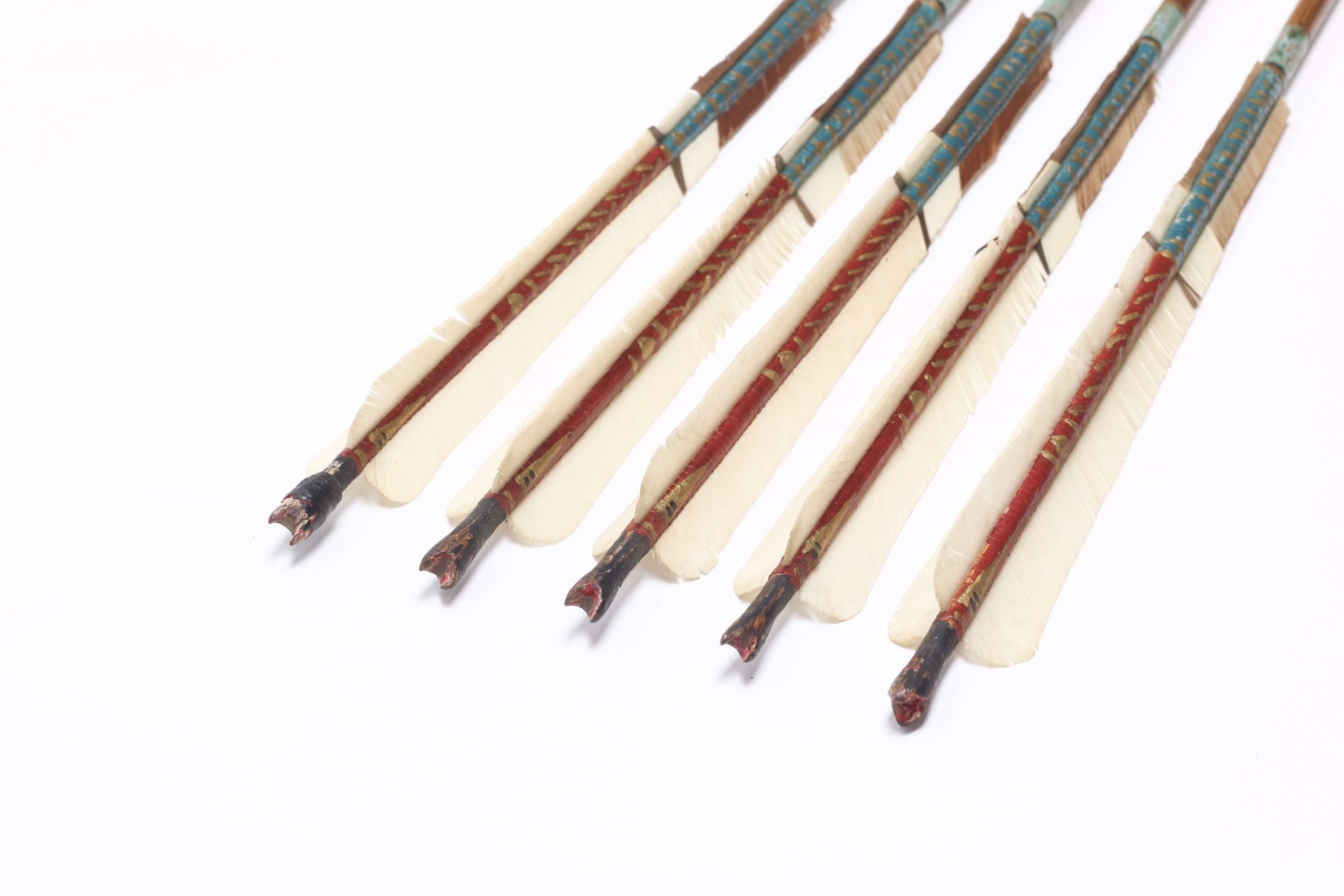 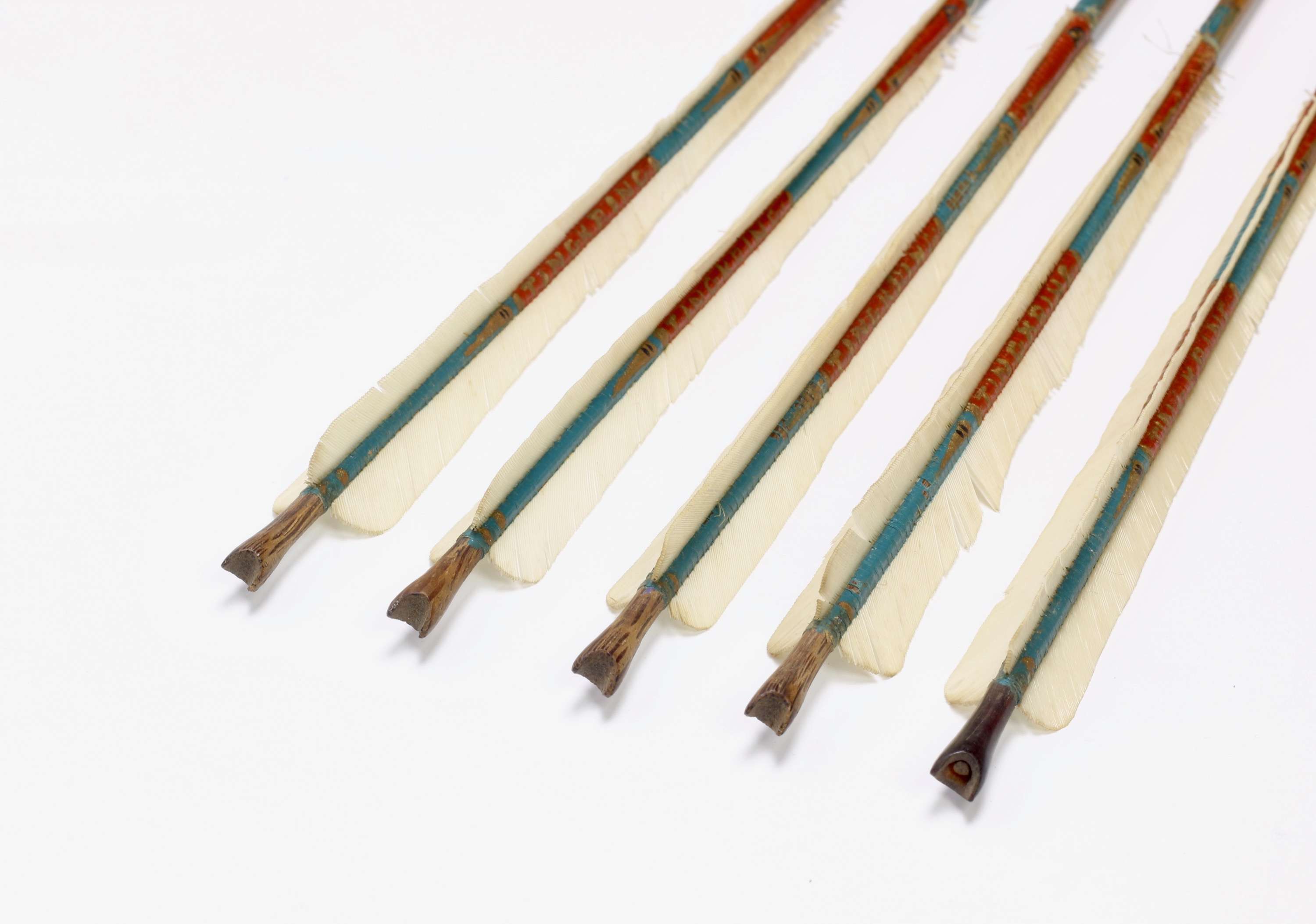 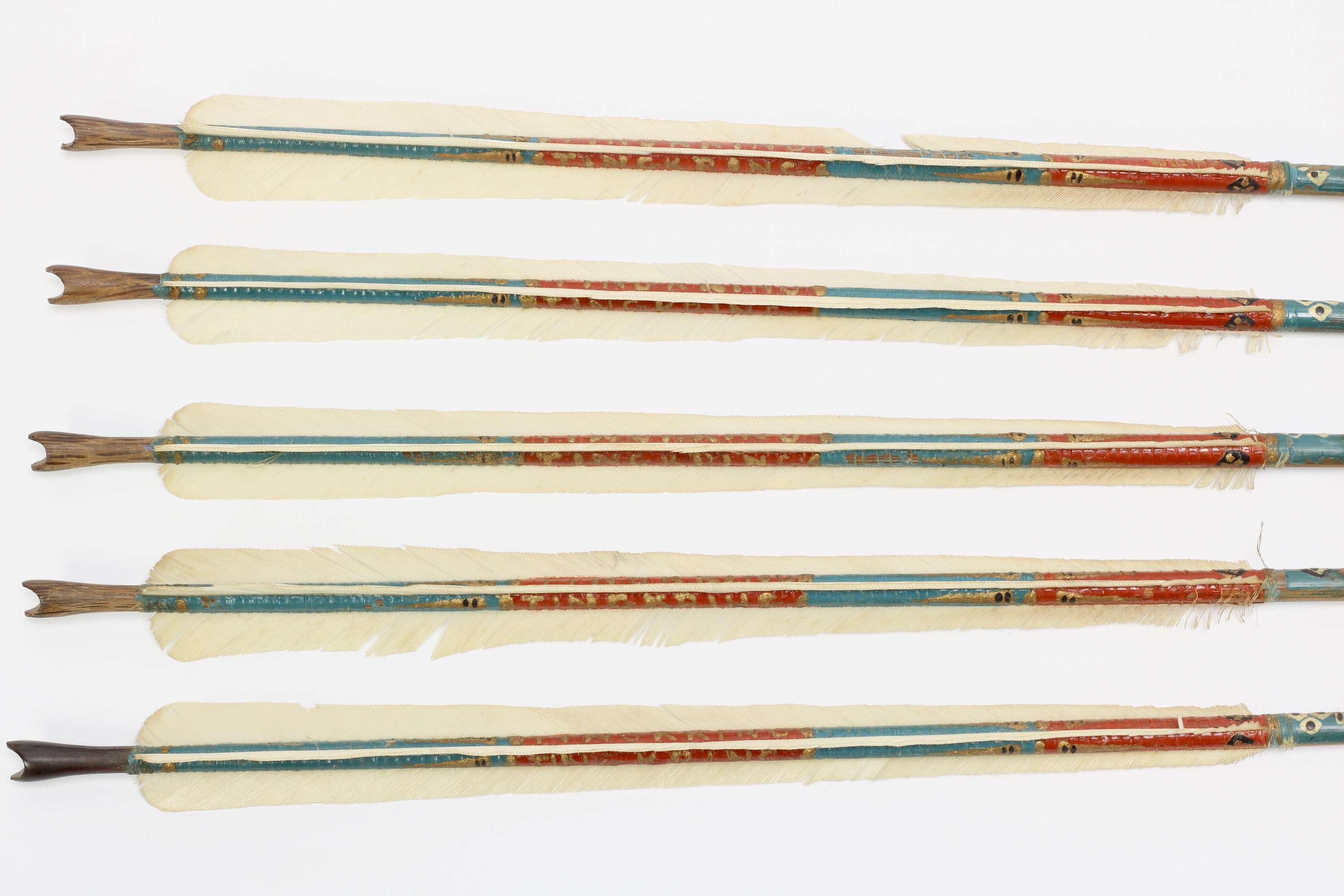 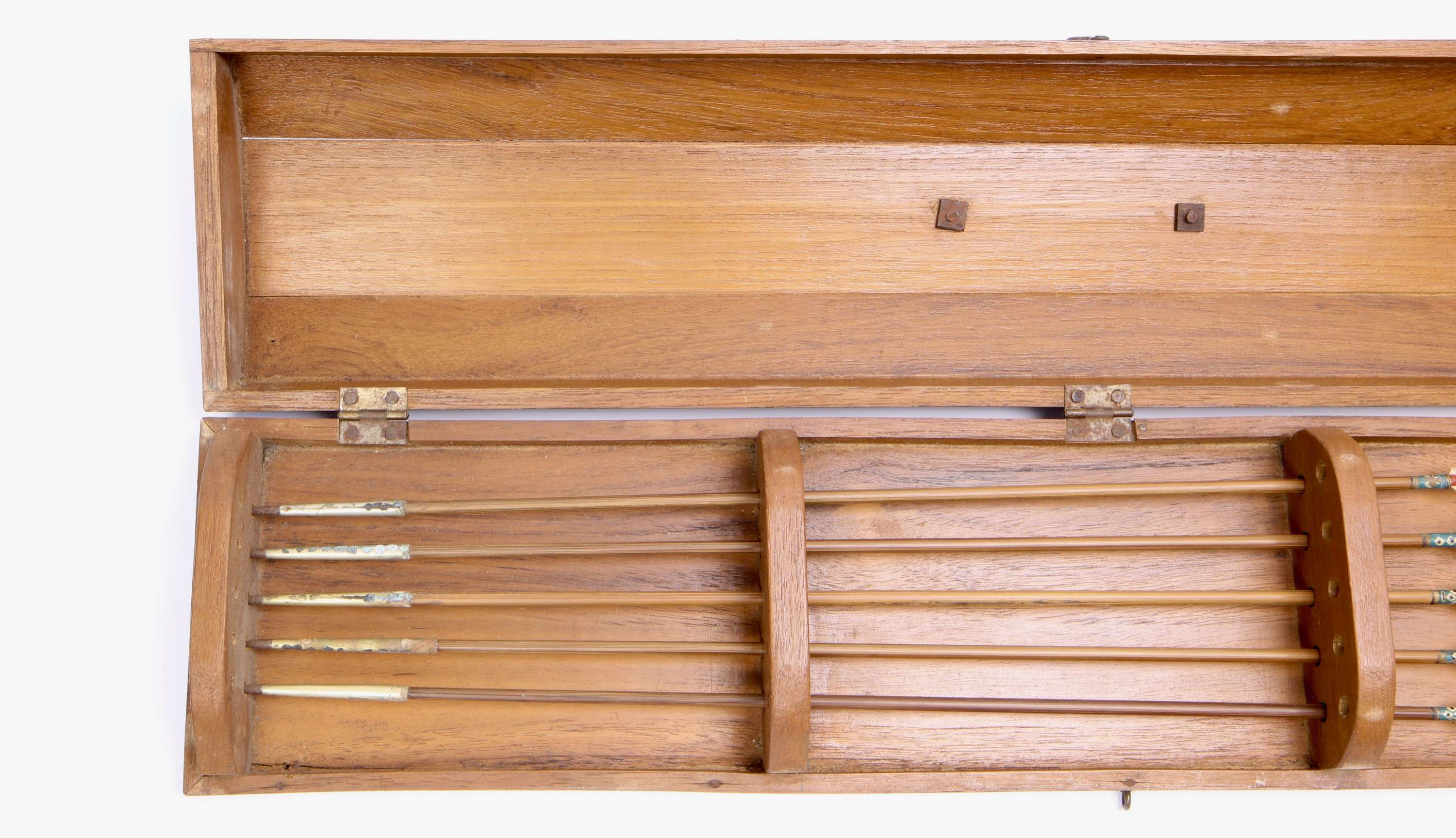 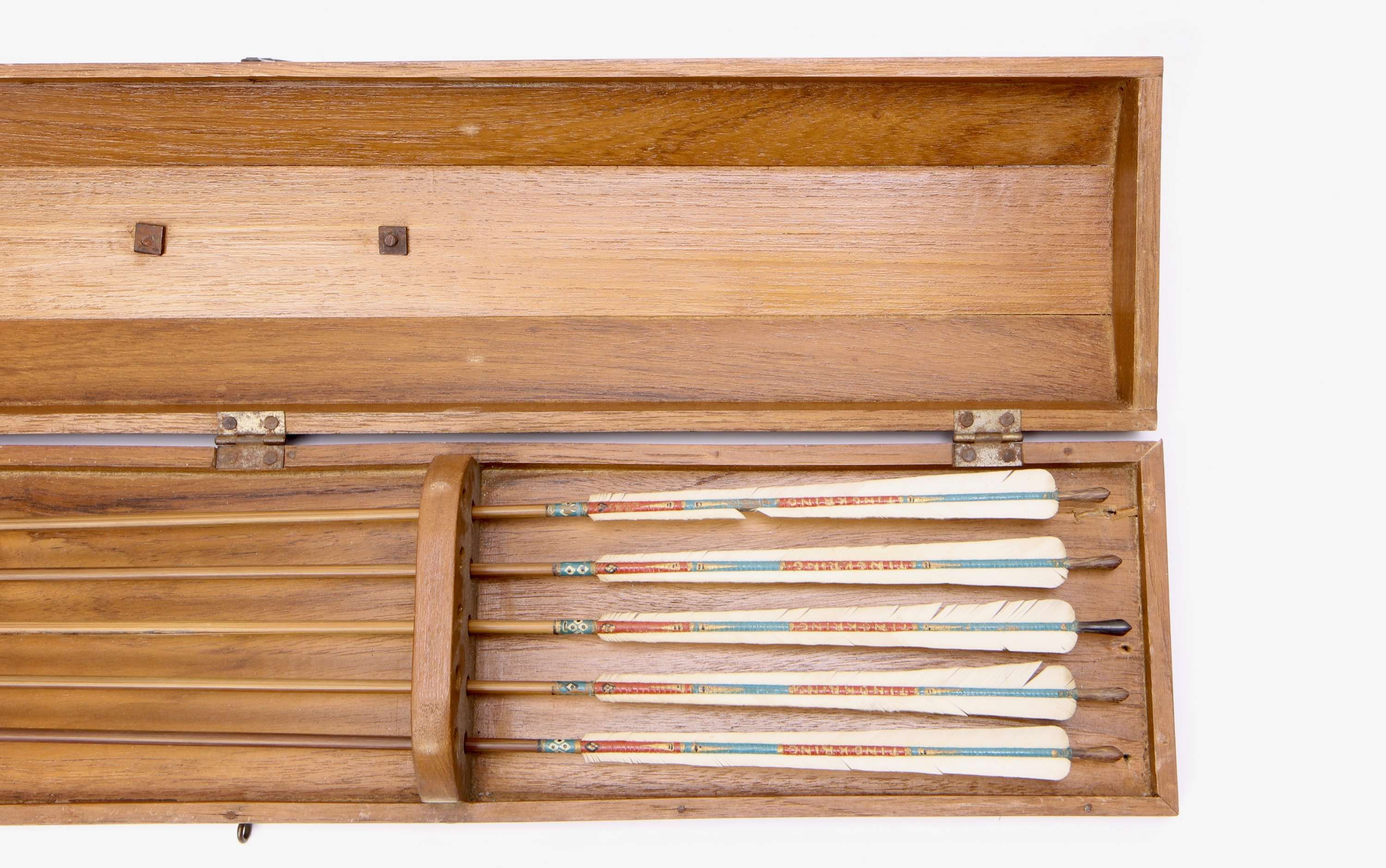 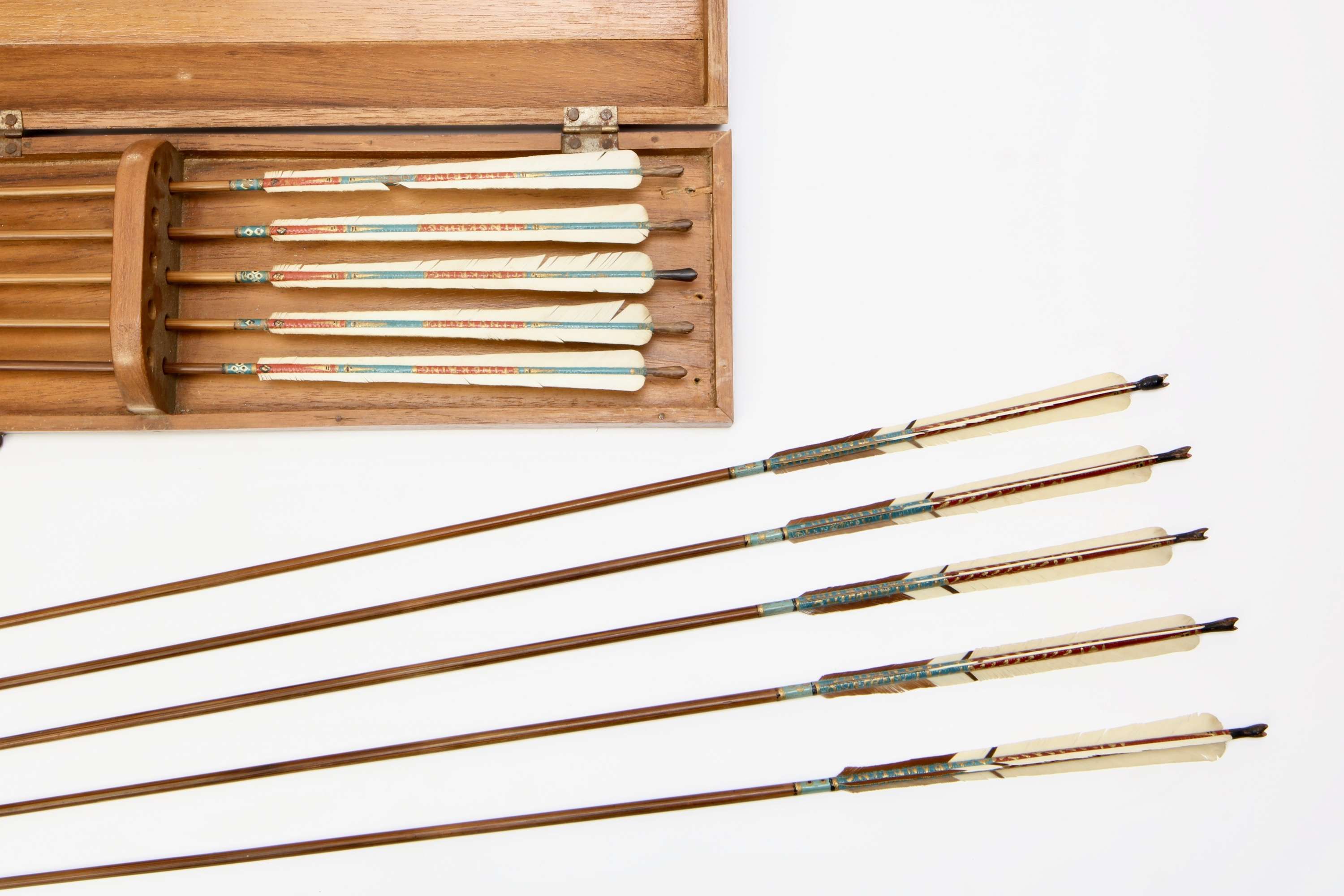 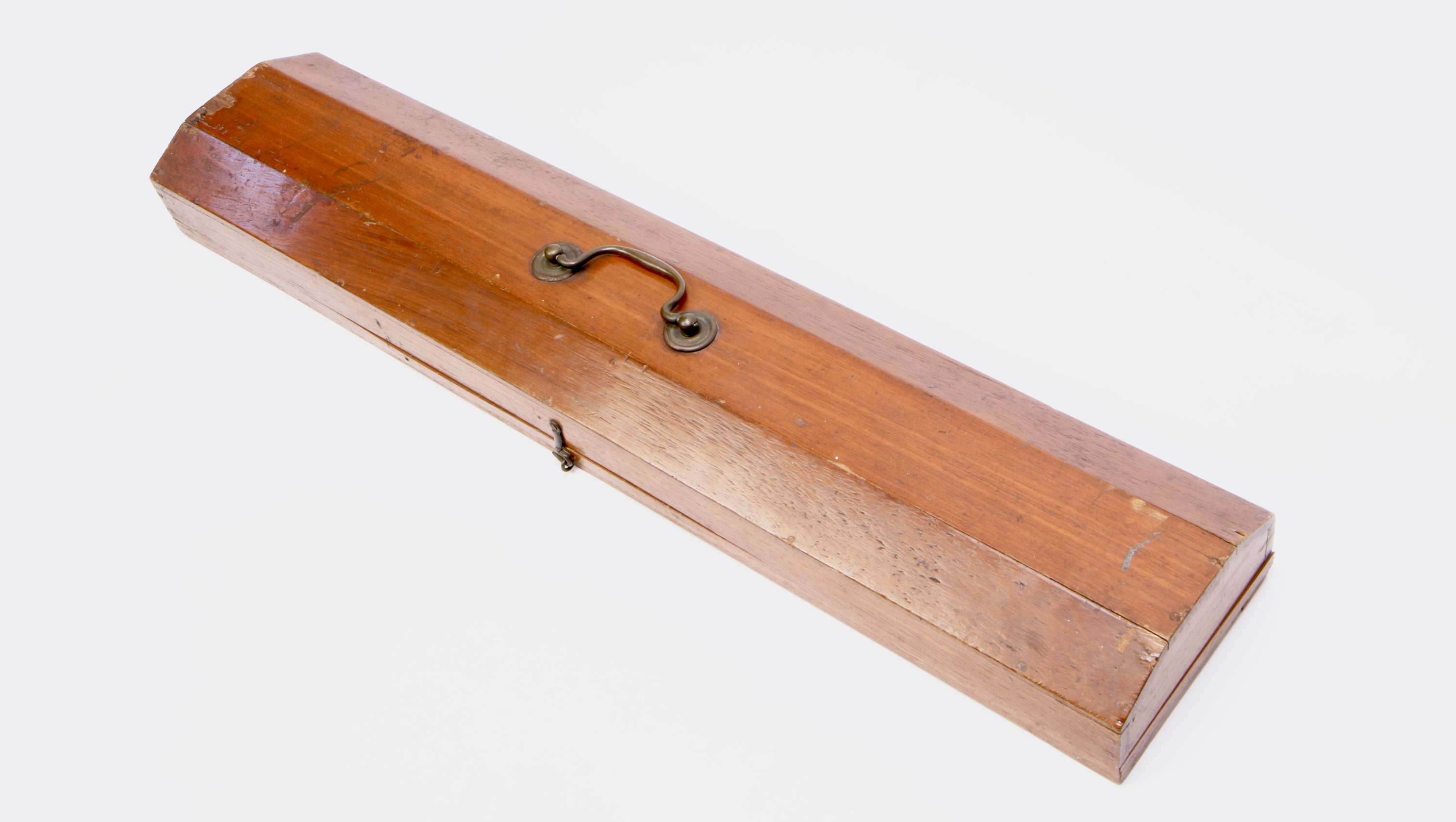 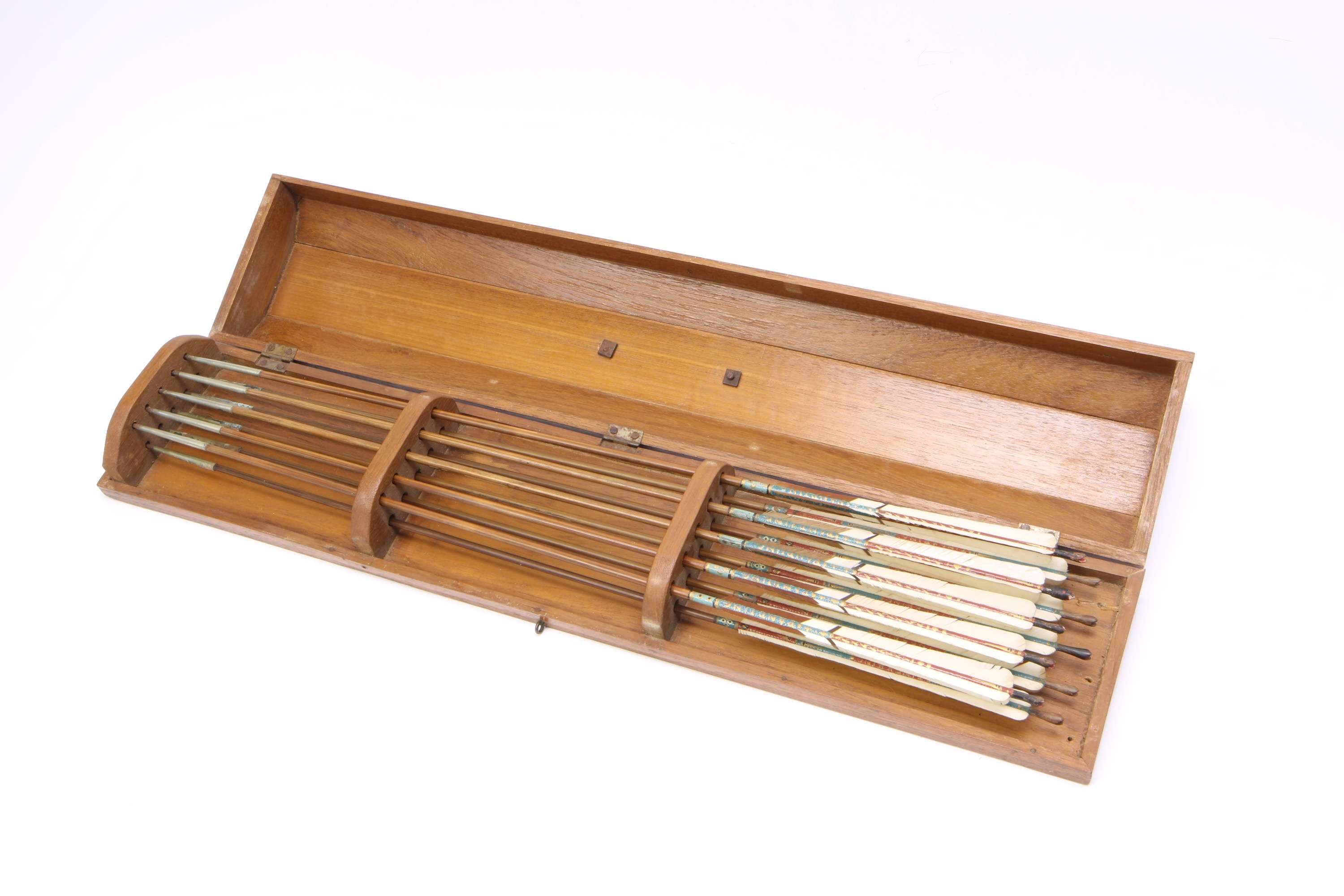