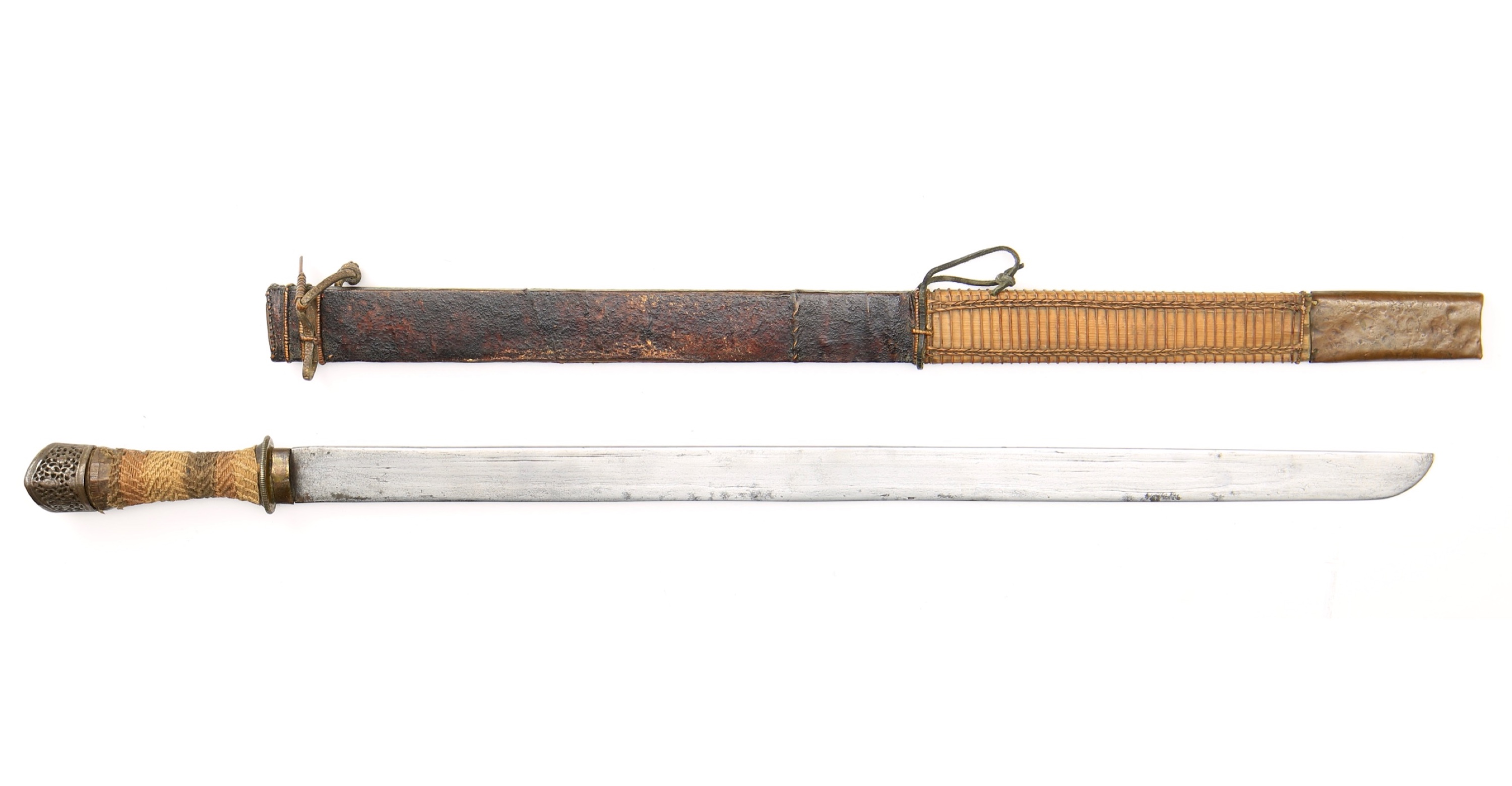 A very large Bhutanese patag with an interesting, non-Bhutanese scabbard. We will get to that later.

Like on many Bhutanese patag, the blade is purely Tibetan in form and construction and may have been imported or made by one of the itinerant smiths that traveled the country. It is straight, single-edged, with an oblique tip, reminiscent of archaic Chinese swords of this form that were used up to the Song dynasty.

The surface shows the lines that are called "hairpin forging" by collectors. It was made by stacking up rods of iron or steel of lower and higher carbon contents, and then bending them and hammer them into a blade shape.

The hilt is of classic Bhutanese form with a waisted wooden grip, a very small silver guard with ribbed rim, and the characteristic pommel. The grip is bound with cotton thread in shades of faded red, yellow and orange.

The pommel, in this case, is pierced iron, which is rarely encountered on these and probably indicative of an earlier origin than most. The facing side is nicely pierced with designs of flowers and the sacred jewel among scrollwork. The reverse is flat, but with faint remains of fine silver overlay in a diaper pattern with flowers in lozenges. The top of the pommel, also in pierced work, shows the wheel of dharma among foliage. There are remains of copper overlay on most of the scrollwork, probably once used as a base for fire gilding, now gone.

The scabbard has two carrying straps that indicate it was worn slung, with the edge down. This, plus the length and the far balance, indicates it was intended to be worn by a cavalryman.

The sword itself is entirely Bhutanese, and a rather early and high-end piece at that. The use of iron is probably indicative of an earlier origin, probably early to mid 19th century. The remains of silver overlay and the copper base for gilding indicates it was one of the better swords made in Bhutan at the time.

The scabbard is not Bhutanese at all. A nearly identical scabbard including the characteristic braided rattan at the end of the scabbard is in the collection of Staatliche Ethnographische Sammlungen Sachsen, Museum für Völkerkunde Dresden, and attributed to the Digaru Mishmi.1 It was taken during one of the Abor Expeditions between 1890 and 1912.

There is also a photo of a Nyishi person (formerly known as Hill Miri tribes) on Getty Images. Photographed in Arunachal Pradesh in 1982.

Old photographs made in the region show us that Bhutanese swords were commonly worn by the wealthier locals. The scabbard is probably a later 19th-century local replacement.

An old, once rather high-quality Bhutanese sword that was purchased by a tribesman from Arunachal Pradesh. Eventually, the original scabbard was replaced by local work. The sword size, balance, hilt orientation, and scabbard design all point towards use by a cavalryman. 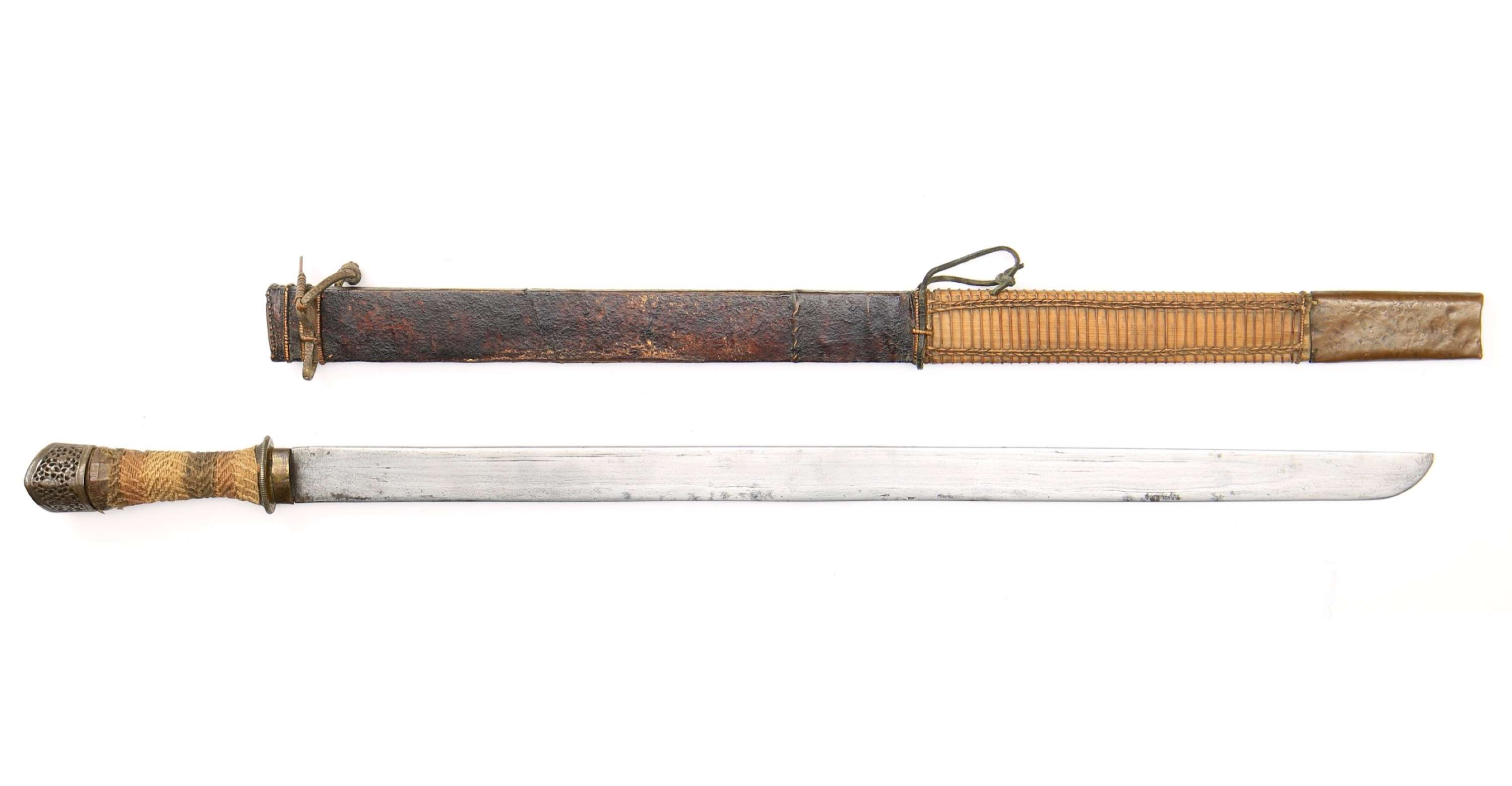 Introduction Knife fighting has long been a wel 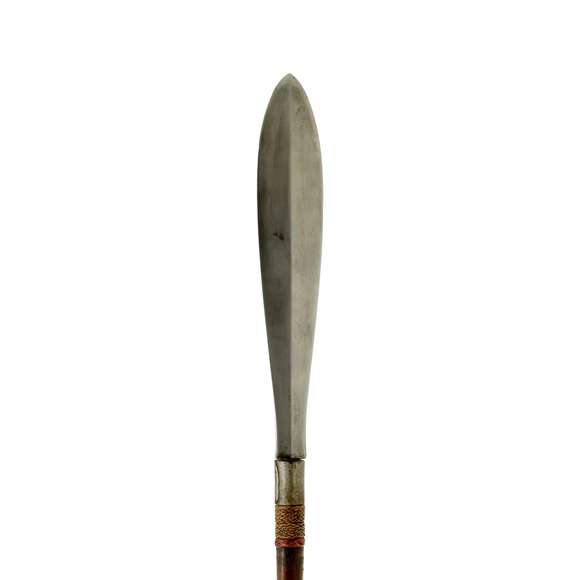 With exceptionally wide blade, forged with a hardened leading edge.