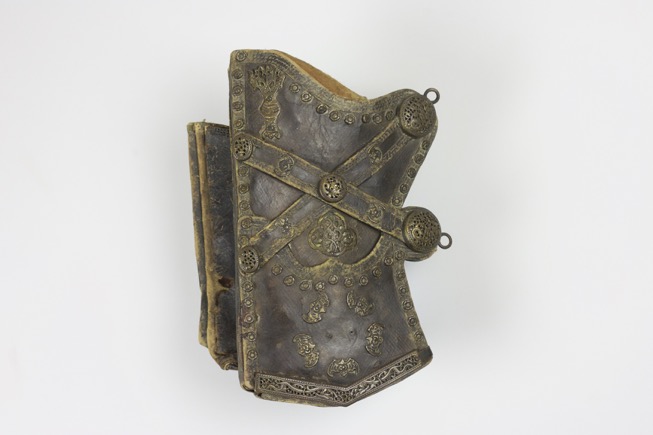 A quiver of the late Qing dynasty. This type of quiver dates from the 19th century and is usually associated with the Manchu troops of the capital "Eight Banners" forces in Beijing. Velvet silk covered examples of such quivers are found with uniforms of various ranks of the imperial guard. Qing regulations stipulated different colors to be were worn on different occasions. This example, covered with leather which was worked with a patter of crossing lines was made in the same style, was probably not worn by the imperial guard but gold remains left on the bronze fittings indicate it was probably not a common soldier, either. It most likely belonged to a person of rank of the regular Manchu banner armies.

This quiver is unusually complete: It retains the three pockets attached to the back with hinges, these used to hold arrows with larger heads like forked hare hunting arrows or whistling arrows. The quiver also retains the inside felt lining between which the arrows were held, and the nut and screw used to tighten the whole. One fitting on the lower part is missing. Many of the fittings have meaning: The five bats stand for the five blessings in life: Wealth, family, health, success, and a peaceful death. The vase with three halberds is a pun for rising three ranks in the examination: The highest promotion attainable.