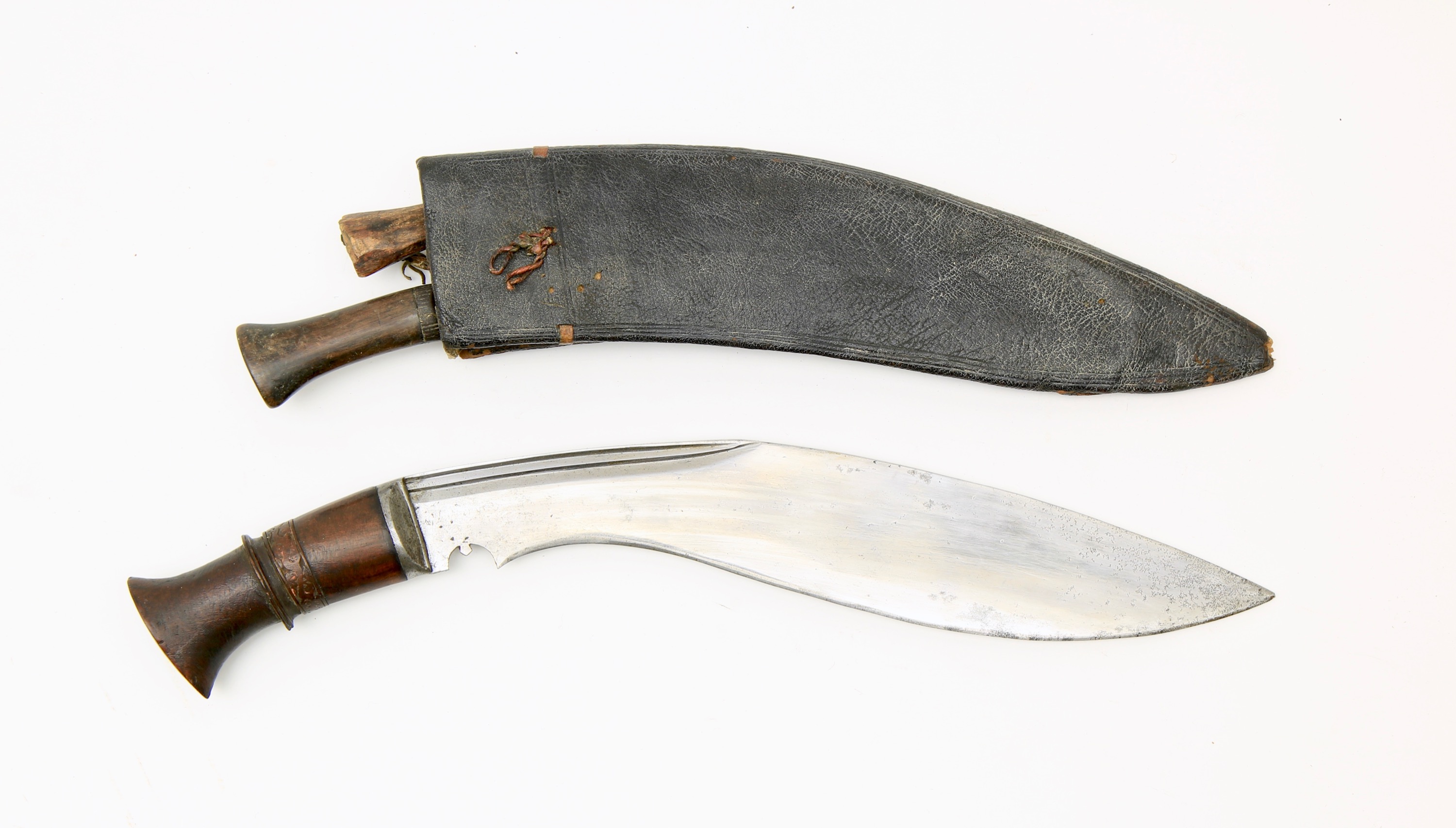 Narrowest at base 34 mm

From a European provate collector

A nice military khukurī of the 19th century, exhibiting the nice blade quality of this era. It in many ways resembles our "Good old khukurī" listed elsewhere on the site: A tightly forged, elegant blade of pleasant geometry. Crisp work on the various grooves and bevels, and a fine balance. Blade in slighly lesser condition, some corrosion had built up near the tip causing light pitting in that area.

The blade is stamped on the left side with a mark somewhat resembling a lotus bud. Marks in this area appear on several other khukurī, but often in the form of a crescent moon shape that mimics the notch or kauro (कौड़ो) at the base of a khukurī blade. They are perhaps makers or proof marks.

The hilt of typical late 19th century form. It has an iron bolster and a wooden grip with prominent raised rib, a decorated band with floral engraving, and a typical pommel profile for this period. There are remains of red pigment in the cavities of the engraved band.

Comes complete with its original scabbard, made of wood and covered with fine grained black leather. Some damage at the tip, see photos. This is also probably what caused the tip of the blade to deteriorate. The scabbard retains its back pockets, with the karda (utility knife), cakmak (fire and sharpening steel) and khisā (a purse for tinder). The lower end of the khisā pocket has now separated from the scabbard so it can move.

The karda on this piece is unusually large, sized like a small dagger in its own right. It is pierced with two round holes, and has two dimples on either side, each set of dimples on another side of the holes.

A nice example of a sturdy 19th century Gurkha sidearm. It has a quality blade of nice workmanship, and excellent handling characteristics. Comes complete with its original scabbard and all accoutrements. Rarer stamped blade. 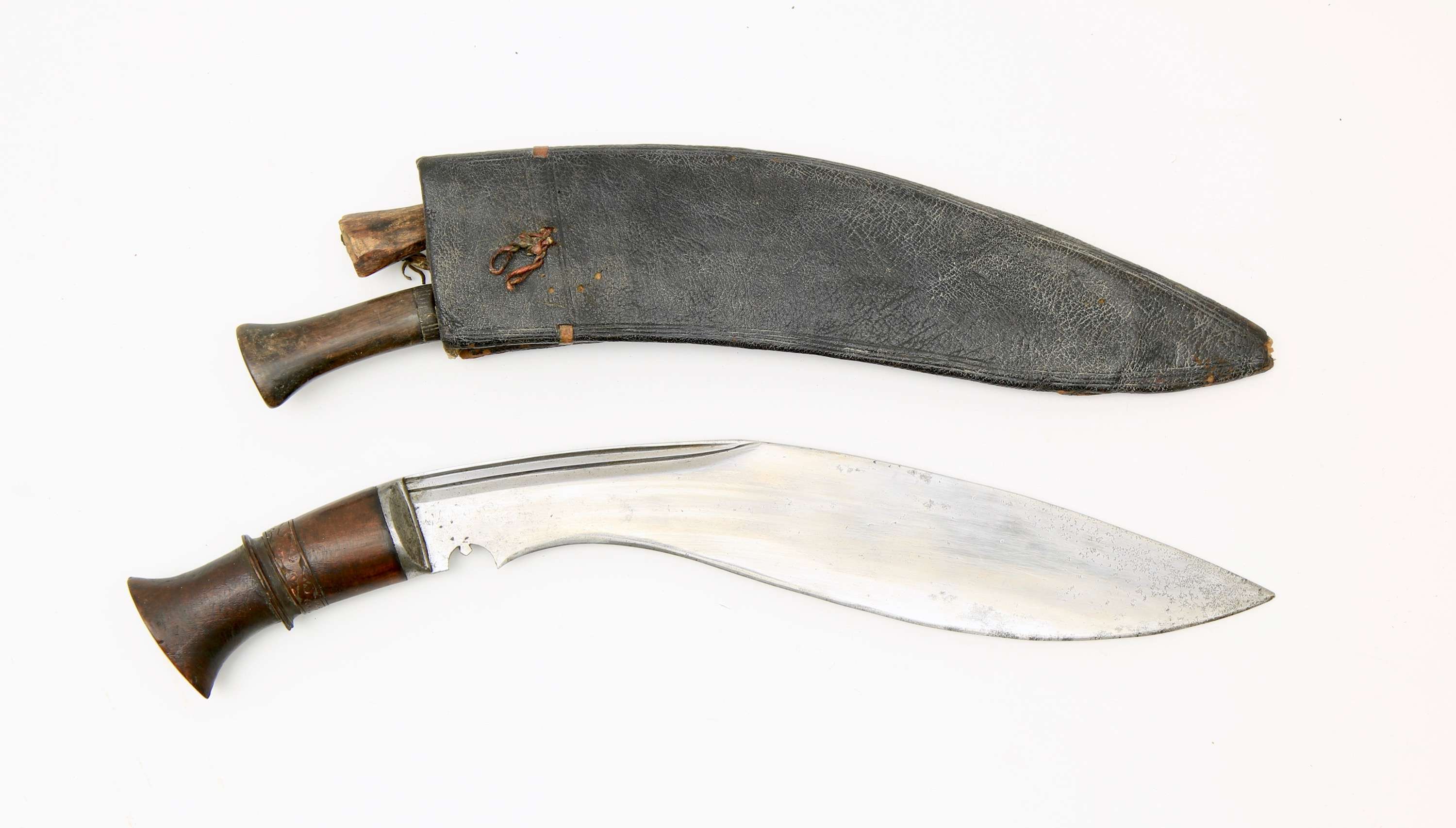 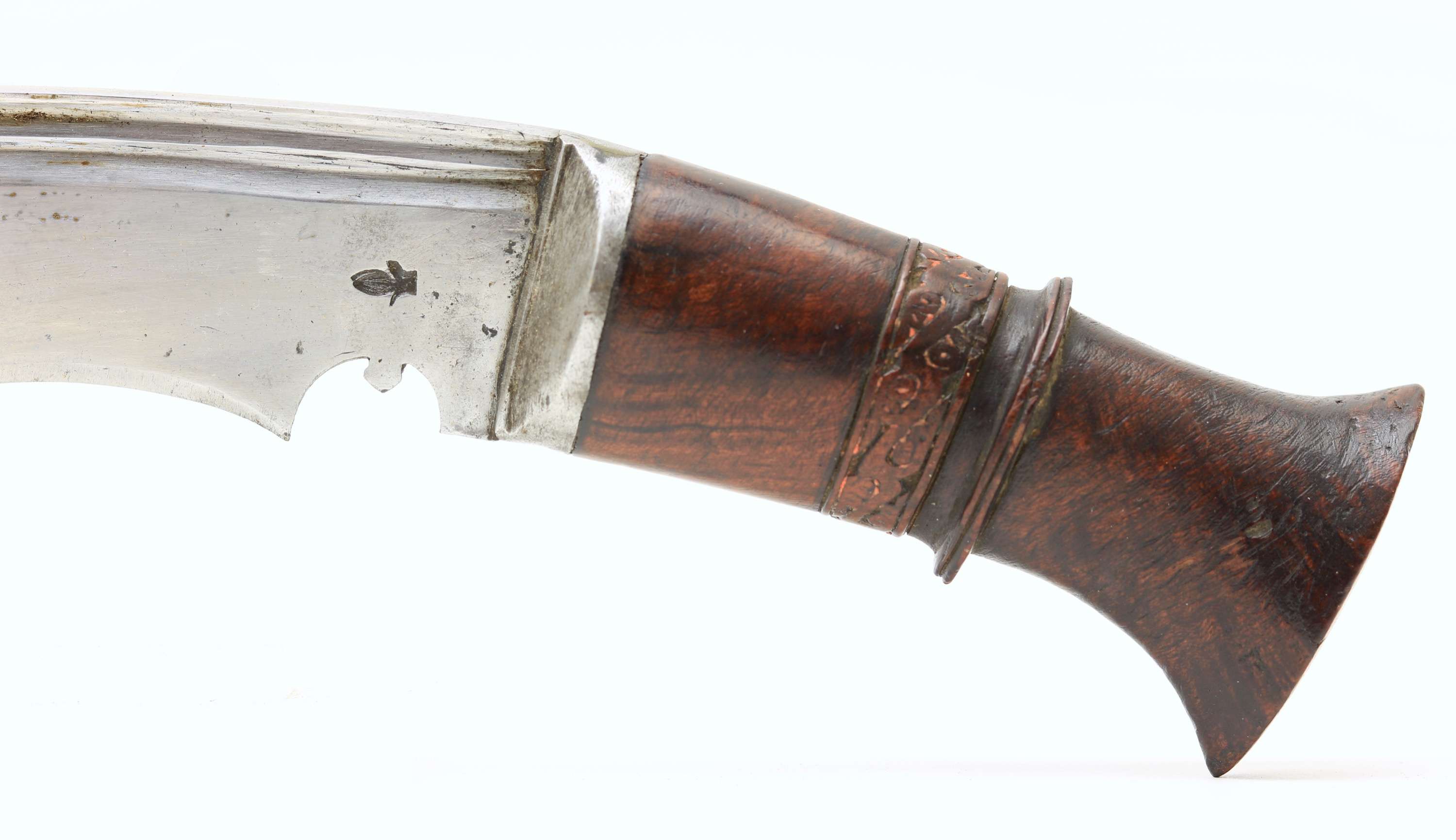 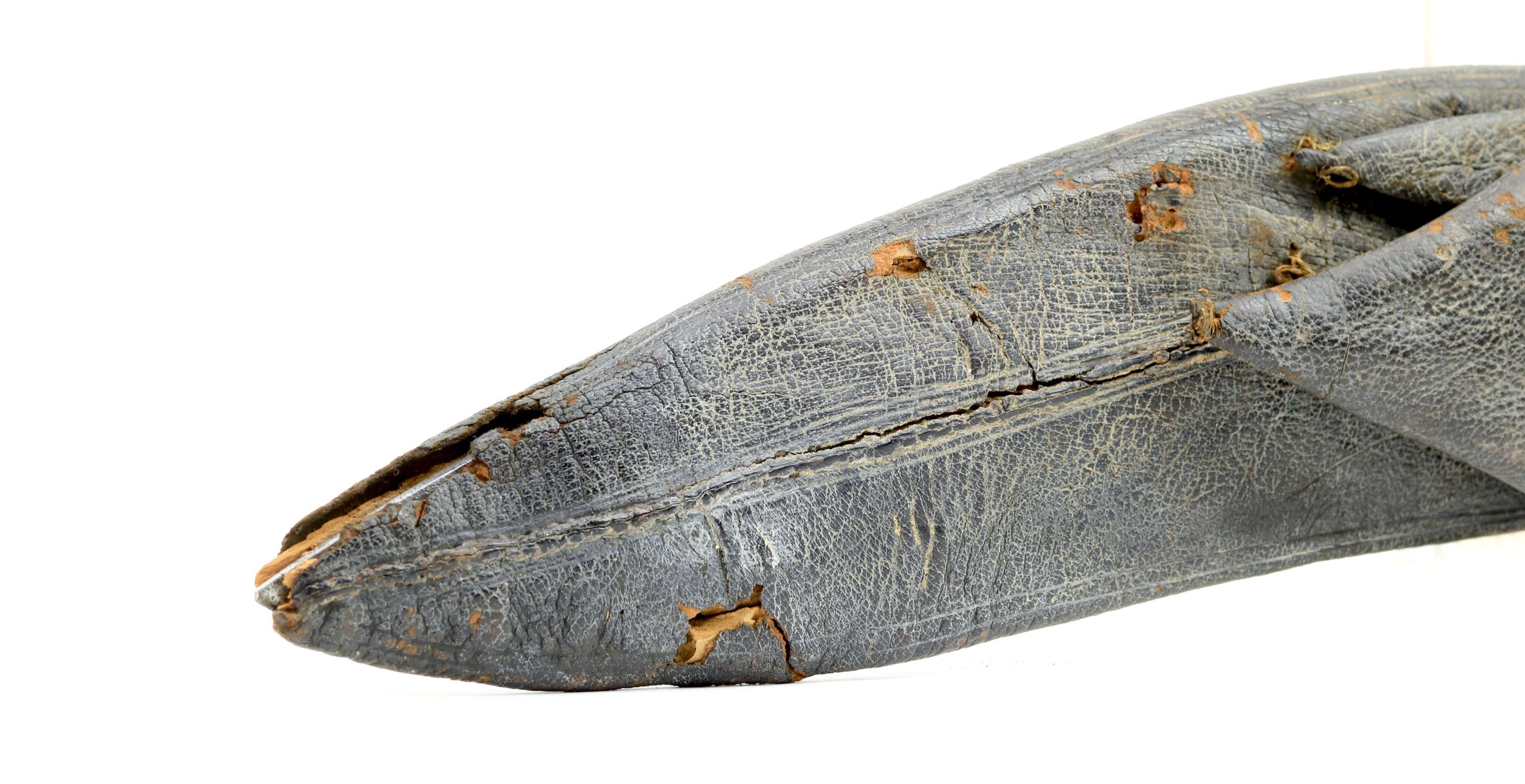 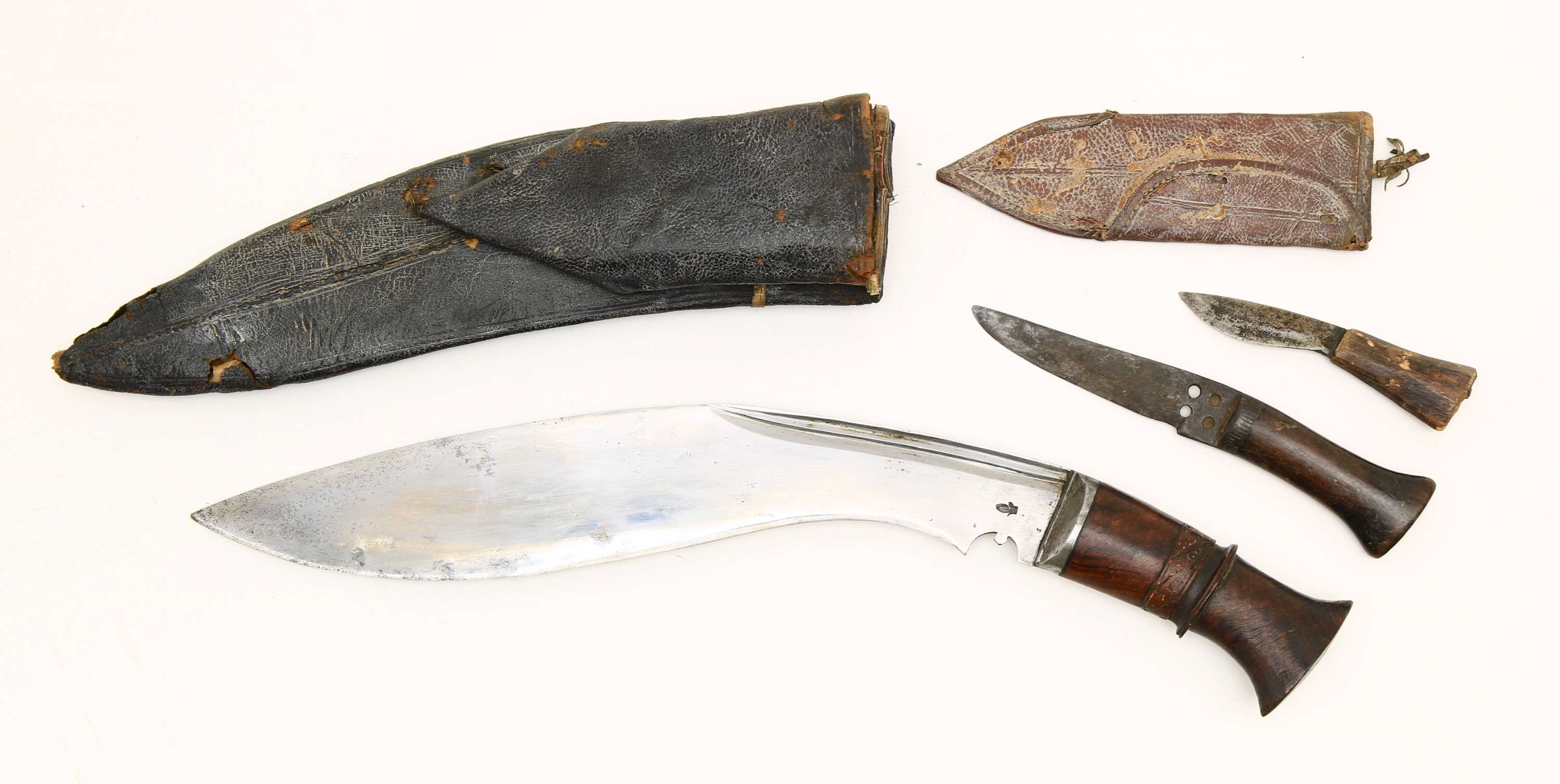