A rare set of song kiếm (雙劍) of the Nguyễn dynasty (1802-1945). Among antique Vietnamese swords, double swords are rather rare. I know of only a handful of sets in private collections, and all of those are of a shorter variety. Full-length Vietnamese swords are somewhat more common but are usually purely ceremonial. This set is a rare combination of being full-length, double swords with live blades.

The substantial blades are of a triangular cross-section with strongly hollow ground surfaces leading up to the peak on the ridged side. The tips are of typical angular “male” form, as also often seen on depictions of Chinese Ming dynasty jian after which the Vietnamese kiếm was modeled. Blades are very stiff and rather well-made.

The hilts are of typical form and with very graceful proportions. Guards and pommels are of copper with silver and niello inlays of traditional floral designs. Copper was probably chosen because it is stronger and heavier than the silver used for the typical Vietnamese ceremonial kiếm. The hardwood grips are held between two silver ferrules with hollowed outside surfaces, a nice aesthetic touch. They are inlaid with mother-of-pearl in motifs of four bats around a longevity symbol. The back of the grips are lined with brass sheet for added strength.

While most Vietnamese swords would have hilt mounts in the same material as the scabbard mounts, contrasting metals seem to be common on the small group of double kiem I've studied.

Minor play in one of the hilts, also some splitting of the brass sheet from the hilt on the same piece. No dents in any of the mounts (rare!) and no losses whatsoever in the mother-of-pearl inlays.

An extremely rare set of long double kiem with sharp, substantial blades and sturdy copper mounts with fine inlays. Although the decoration is not as fine as we are used to seeing on purely ceremonial jian, the whole is, by all means, well-made and a lot better than most Chinese examples of this type encountered. 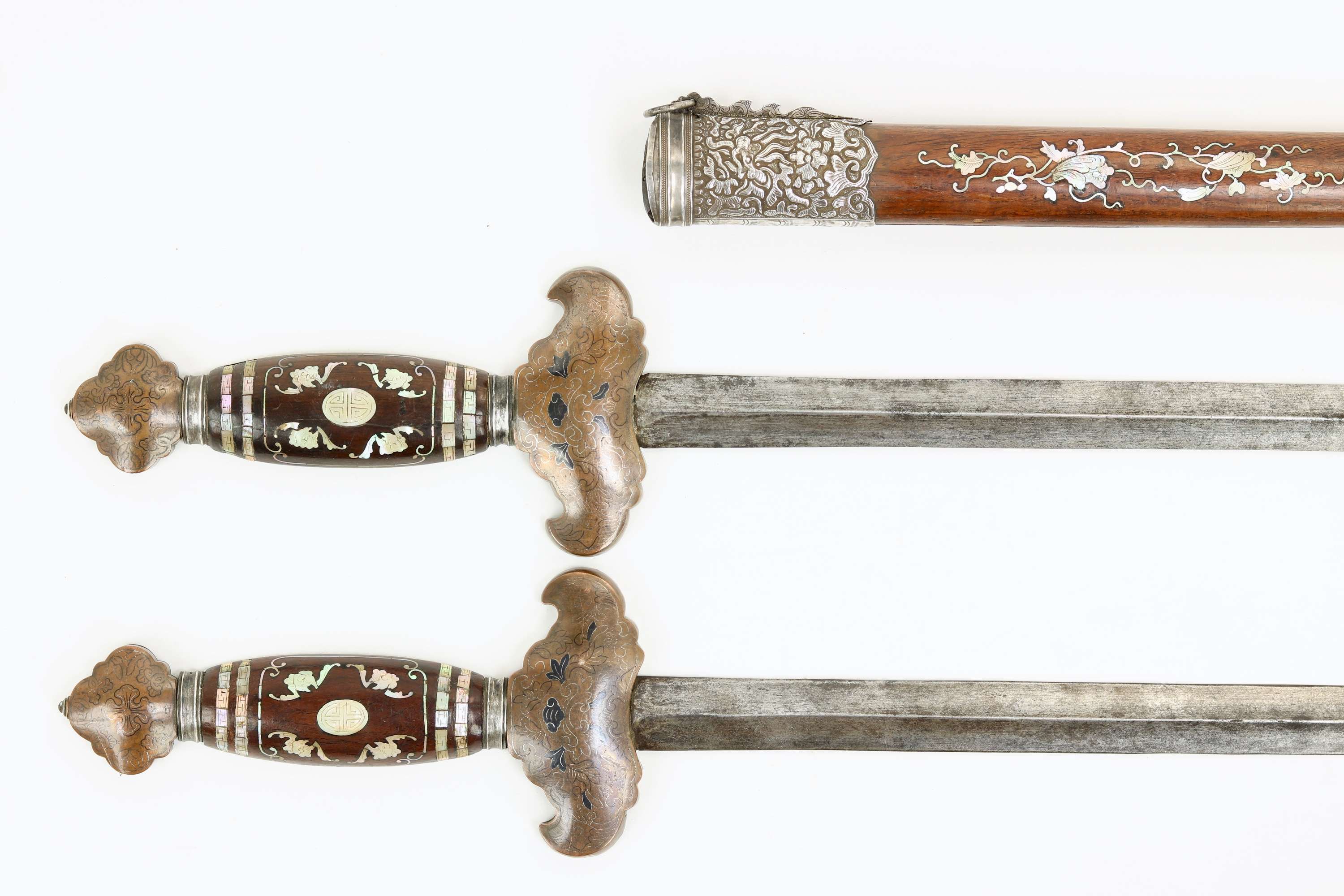 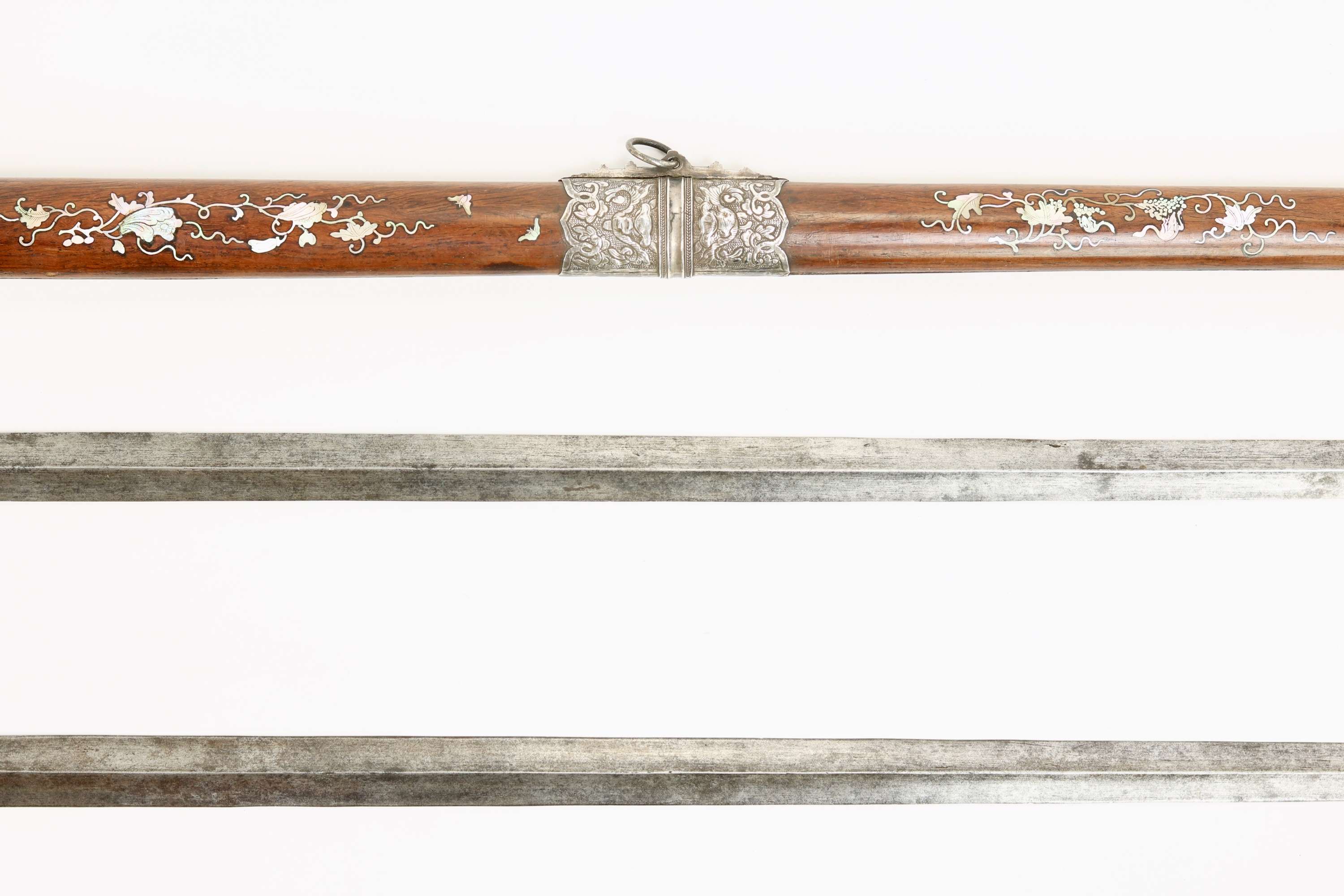 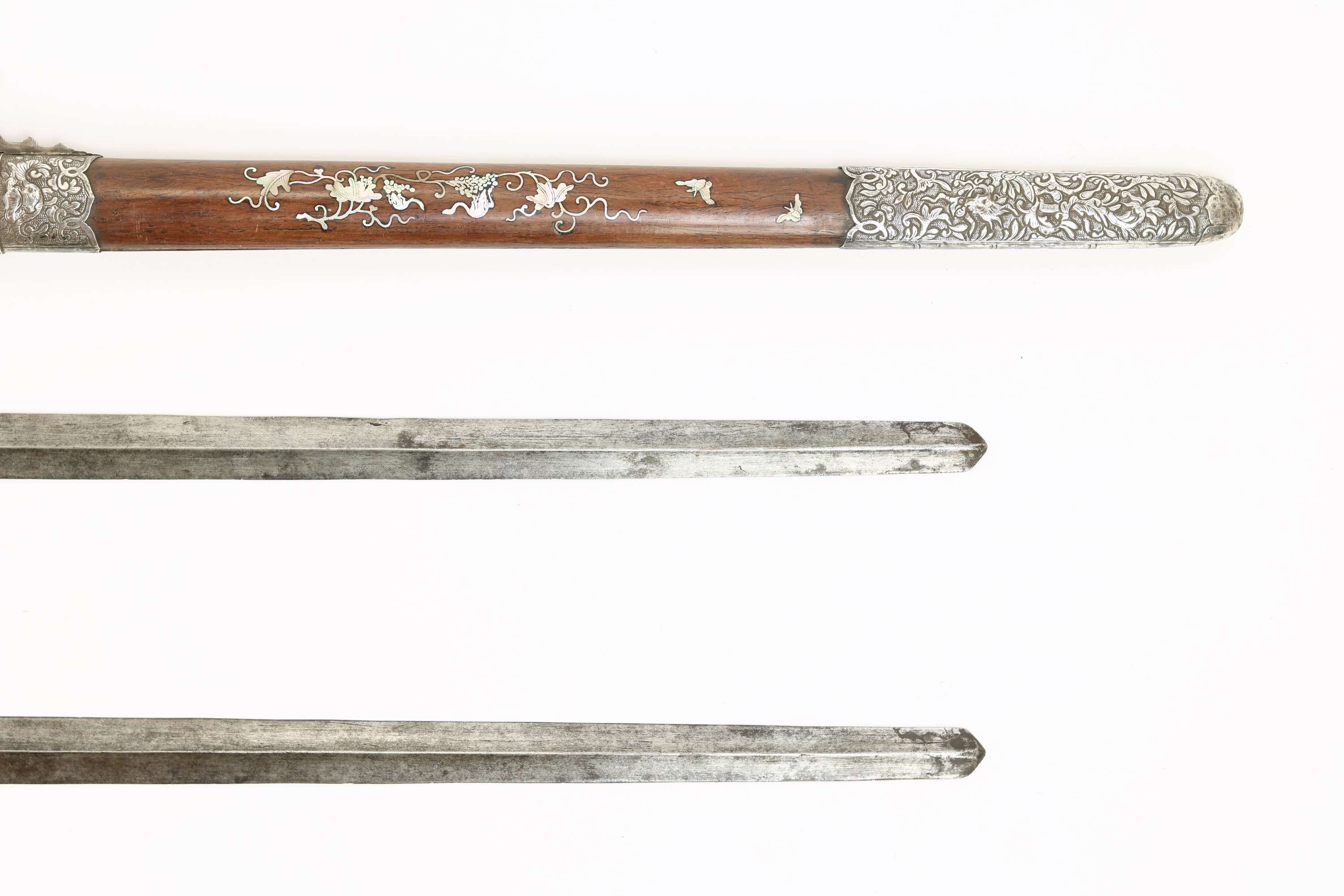 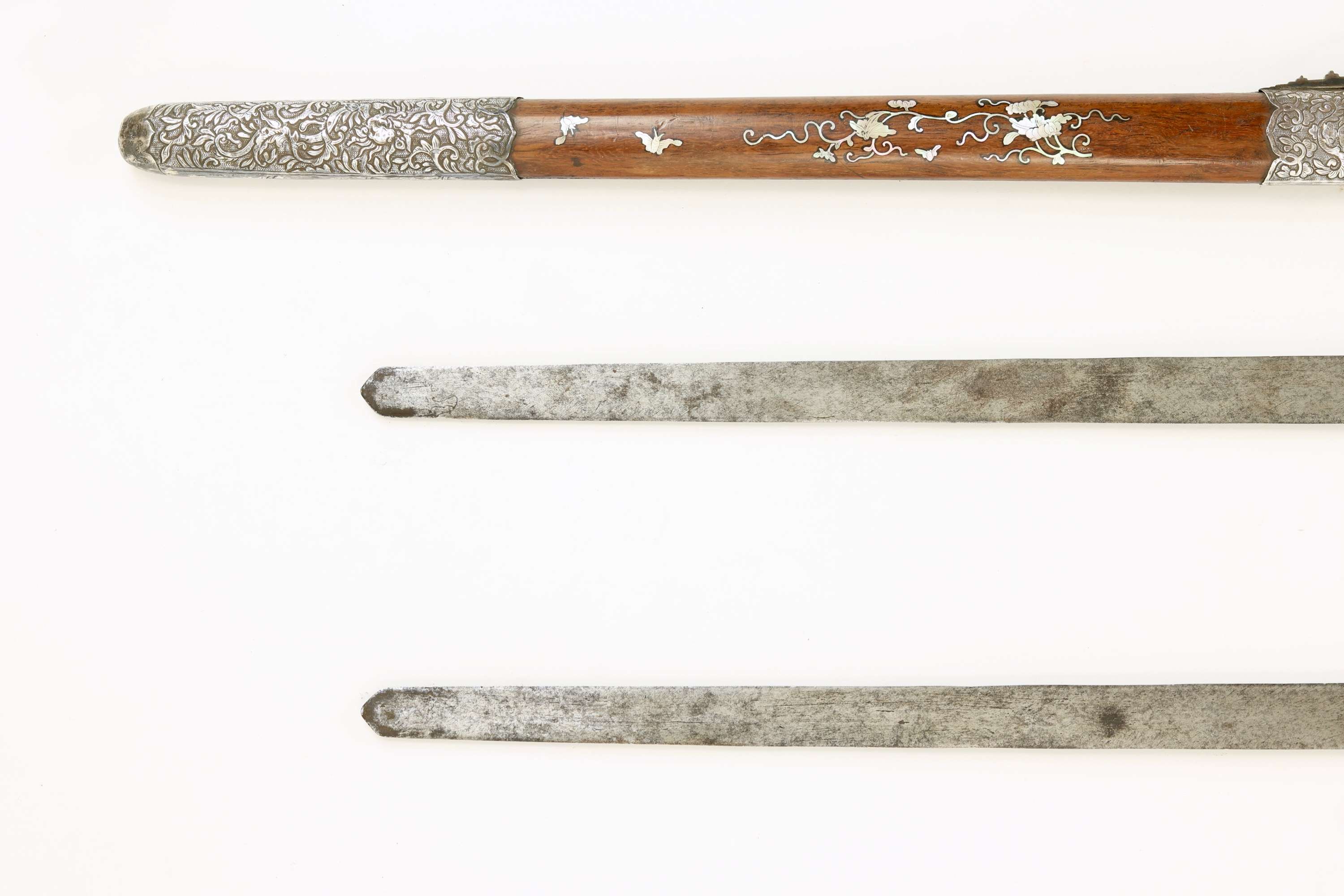 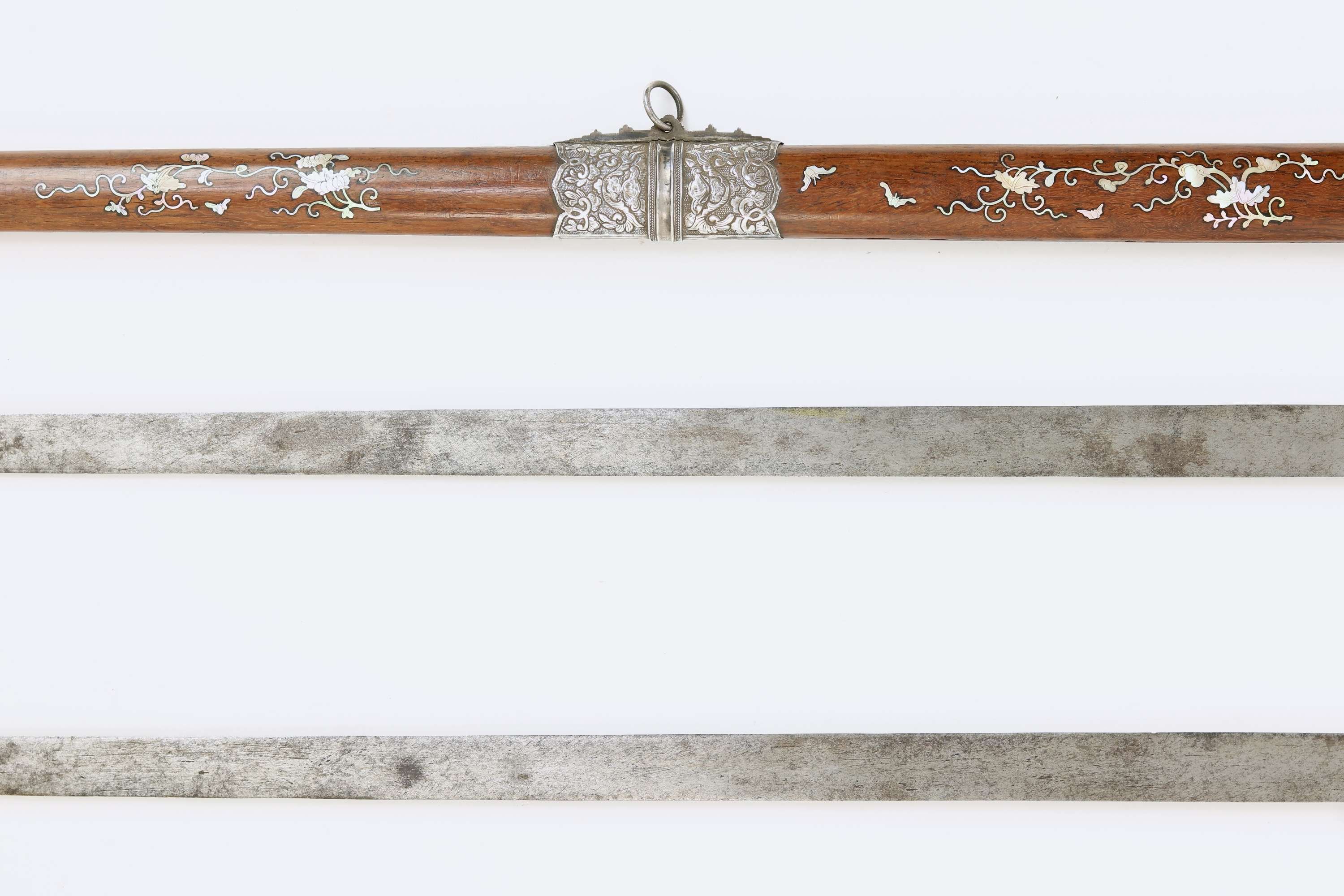