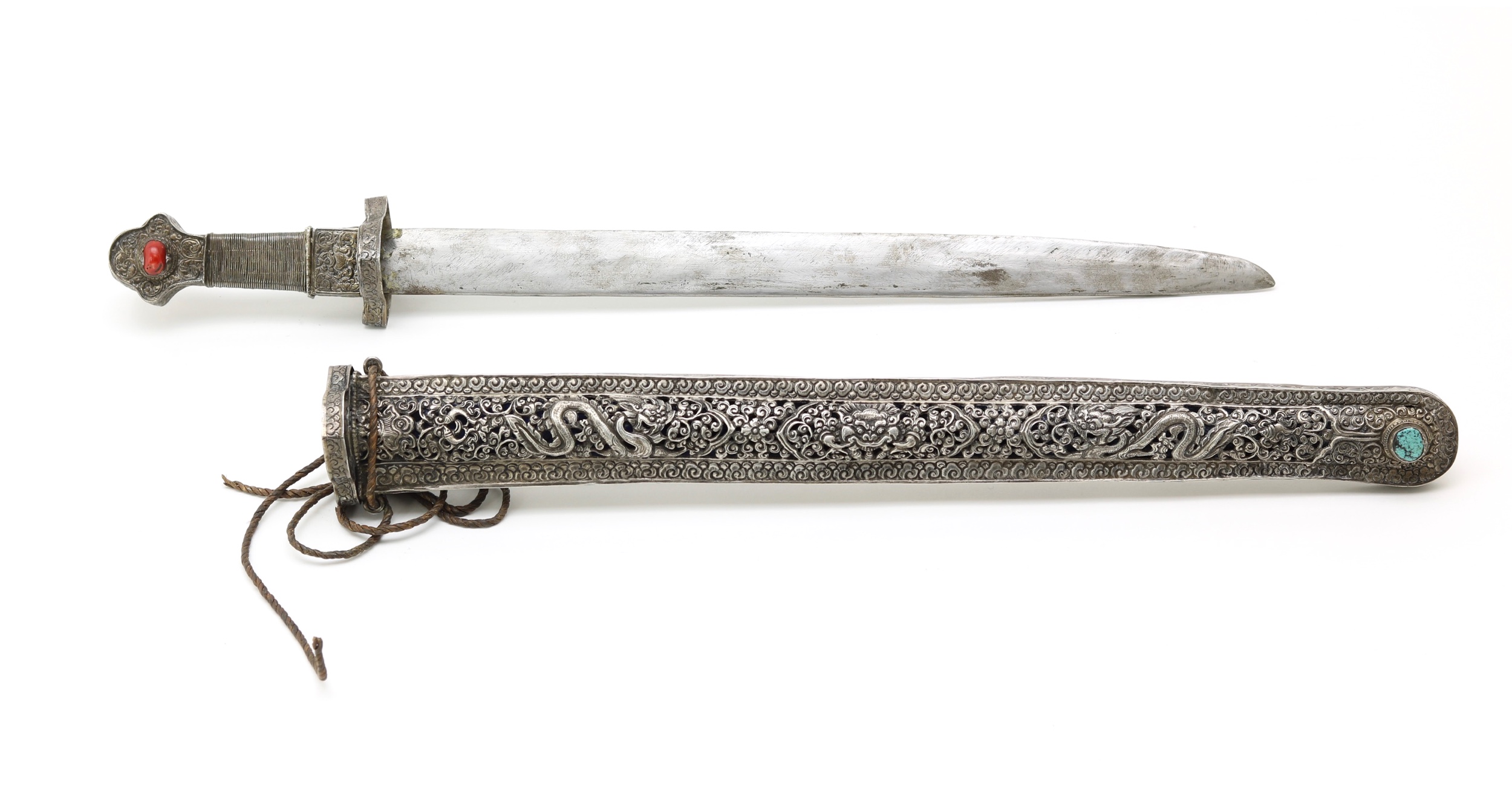 Purchased in the 1980's in Leh, Ladakh, Kashmir

"Though a few officials and soldiers wore curved, sabre-like swords at the right hip, and a few nomad chiefs had shortish swords with a pointed tip, the most common variety of the Tibetan sword was a straight, single-edged weapon with a rounded end and a 30-36 inch blade." 1 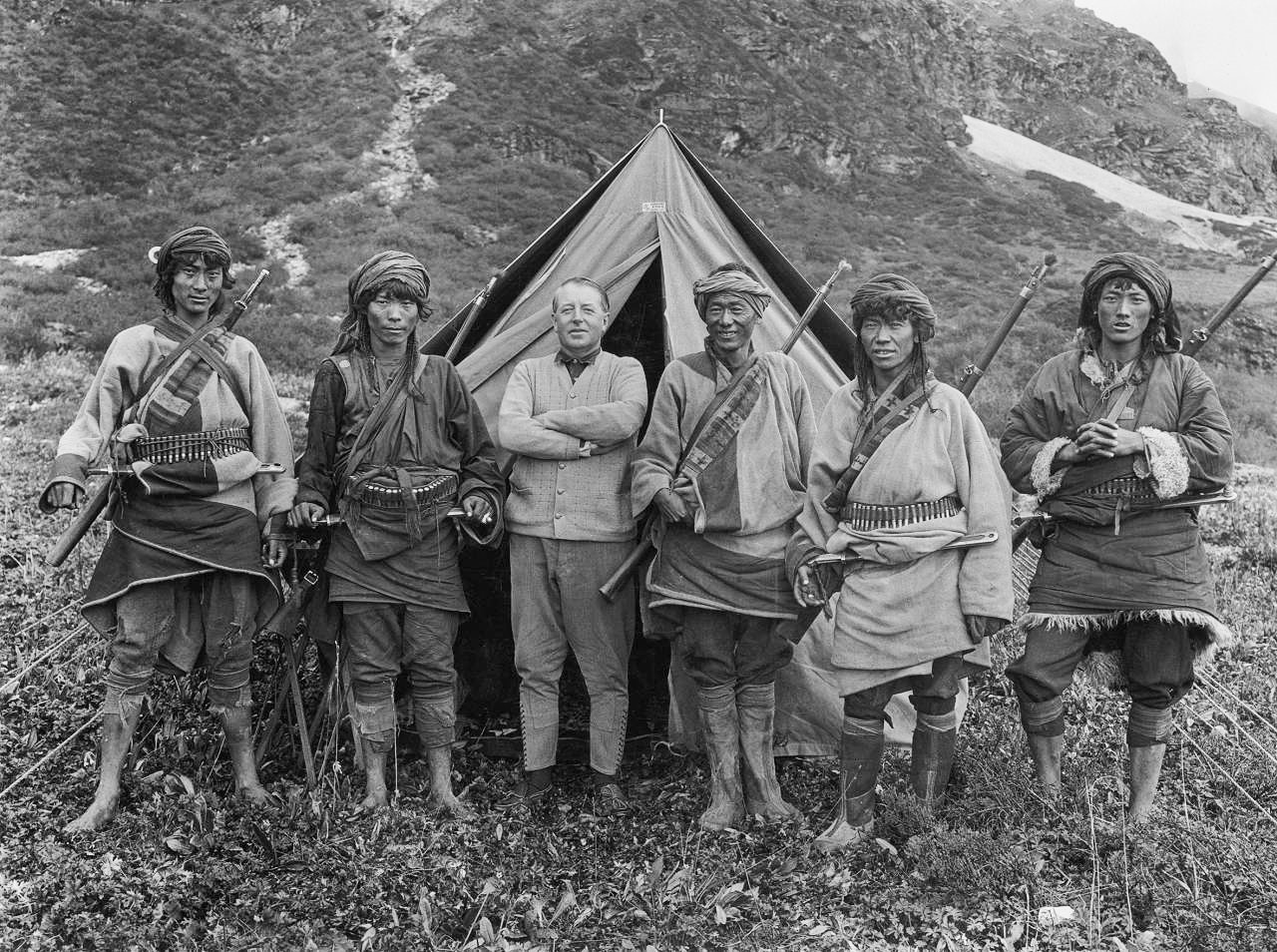 Joseph Rock in Southwestern China in the 1920's.
He is surrounded by men wearing Tibetan shortswords.

The blade is single-edged and starting somewhat wide and tapering to a fairly sharp point. There are no signs of hairpin forging on this particular piece, and the finish is rudimentary. It has the signs of sharpening one would expect from a piece that has been in actual use.

The geometry is interesting, not wedge-shaped like usual but the thickest part is in the center. Also, it has a very short, semi-sharp backedge. It has good weight and balance, and quite some more weight behind the cut than usual for this type of weapon.

The hilt is civered with sheet silver that is chased with floral designs. The pommel is of standard lobed form and holds a single piece of coral. Such coral was imported all the way from the mediterranean and was highly prized in landlocked Tibet. The grip section is of angular cross section and wrapped with fine silver wire. The ferrule is decorated with a vase on the outside and a conch shell horn on the inside.

The cupped guard is of a somewhat unusual lobed form, chased with floral scrollwork.

The best part about the piece is its scabbard. Made of two halves of wood that were covered with silver sheet. The layout is with the classic U-frame, but this time the frame is not a separate piece but part of the same plate that forms the center. It has the peculiar feature of a second "guard" positioned at the scabbard's mouth, of the same shape as the sword's guard.

At the end of the scabbard is a turquoise, prized stones that were thought to have talismanic properties that shielded the owner from misfortune.

The front is entirely worked in relief with designs, worked in repousse, chased, chiseled and pierced. It shows a kīrtimukha or "Face of Glory" in the center with a dragon on either side among foliage. There are also a parasol, conch and a pair of fish. The parasol is a symbol of protection from the suffering experienced in the lower realms of existence. The fish symbolizes moving freely and spontaneously, without fear of drowning in the ocean of suffering. The conch shell horn represents the Buddha's teaching spreading in all directions like the sound of the conch trumpet, awakening his subjects from the deep slumber of ignorance.

The back of the scabbard is chased in low relief, with the Eight Bhuddist Treasures depicted among classic foliage.

Overall in good condition. The silver is fairly thin and so there are dents and distortions to the surfaces, but with no significant damage or loss. See photos. Hilt is tight. Blade is in good, "as found" condition and has not been cleaned or polished.

The sword was purchased by an American couple while in Leh, Ladekh, just West of Tibet in the 1980's. Many Tibetan items were brought there during this period by Tibetan refugees.

A nice example of a more ornate Tibetan shortsword than usual. Its main attraction is the rather intricate work on the scabbard, which is a lot more complex than what we usually see on this type of sword. The utilitarian blade with signs of working-life sharpening confirms that this was used "by the culture" and was not just made for the curio trade. 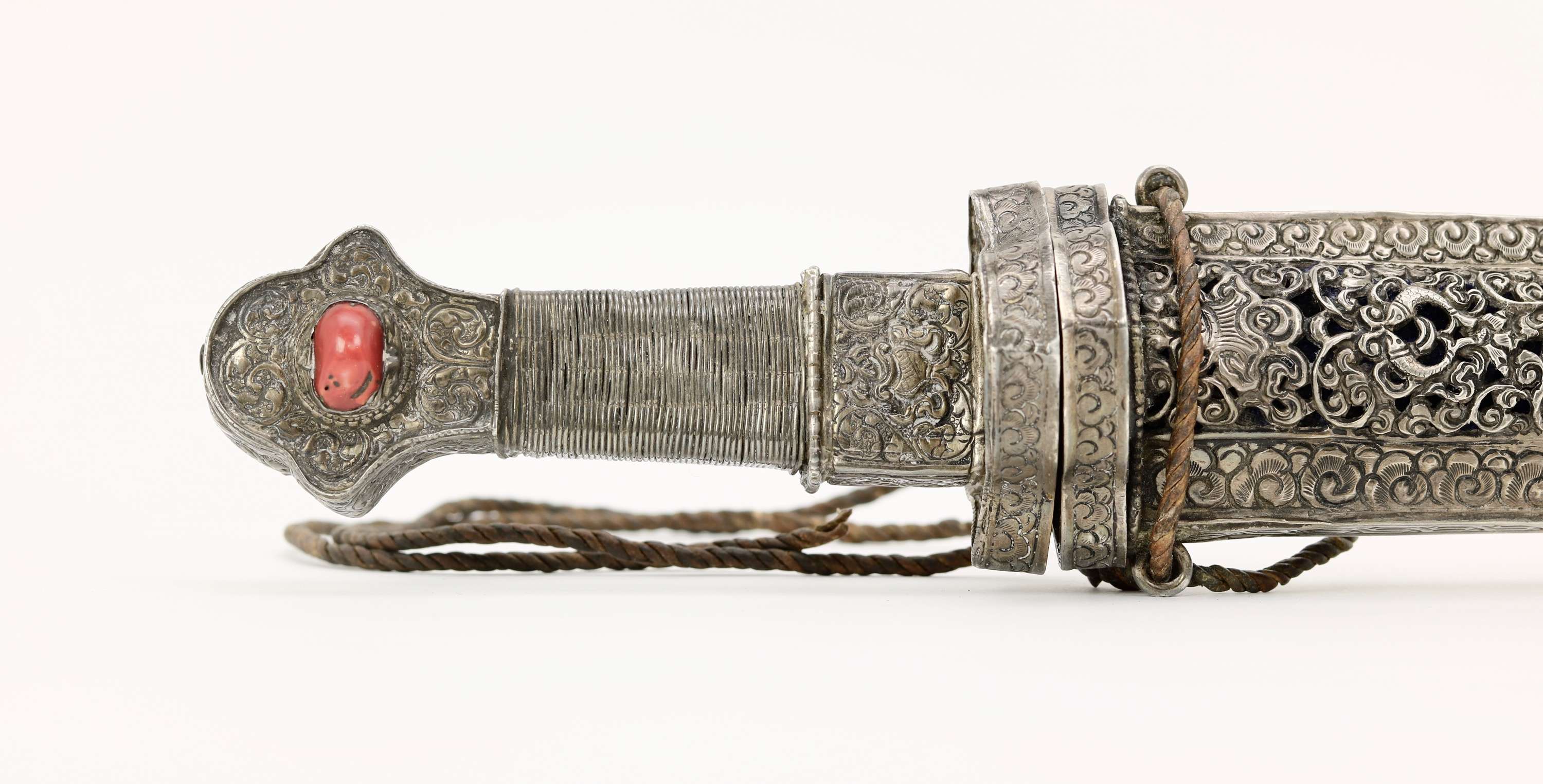 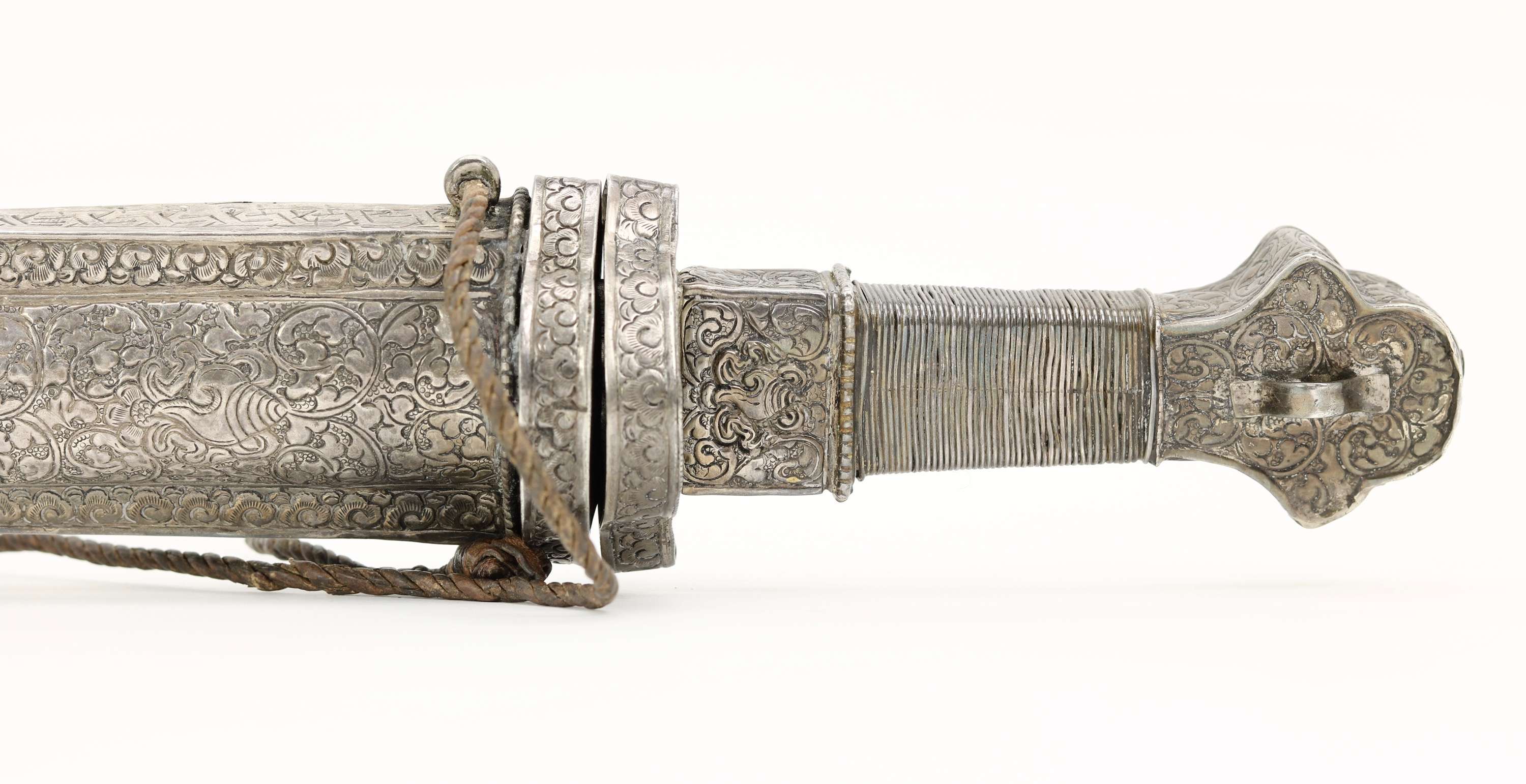 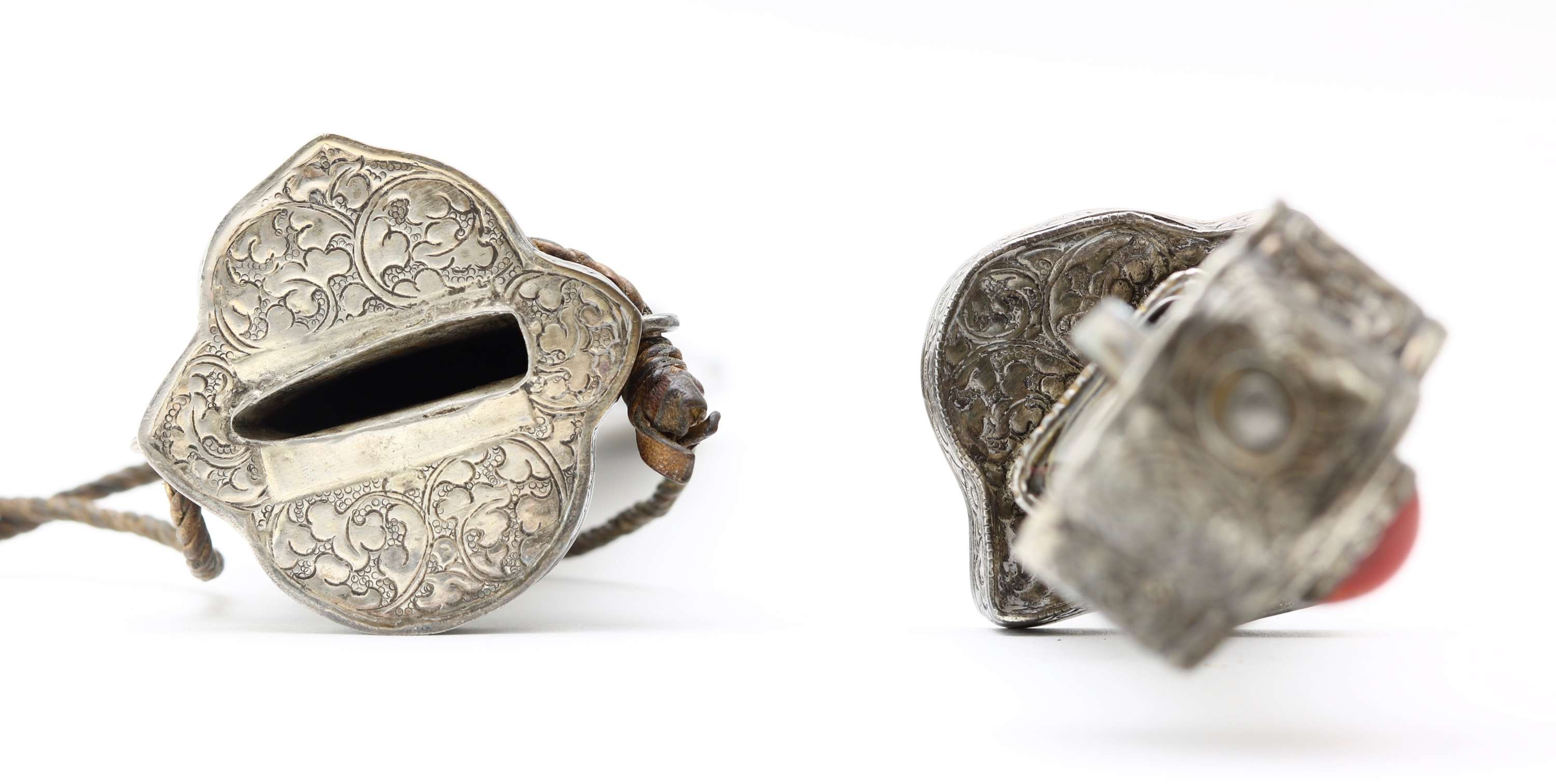 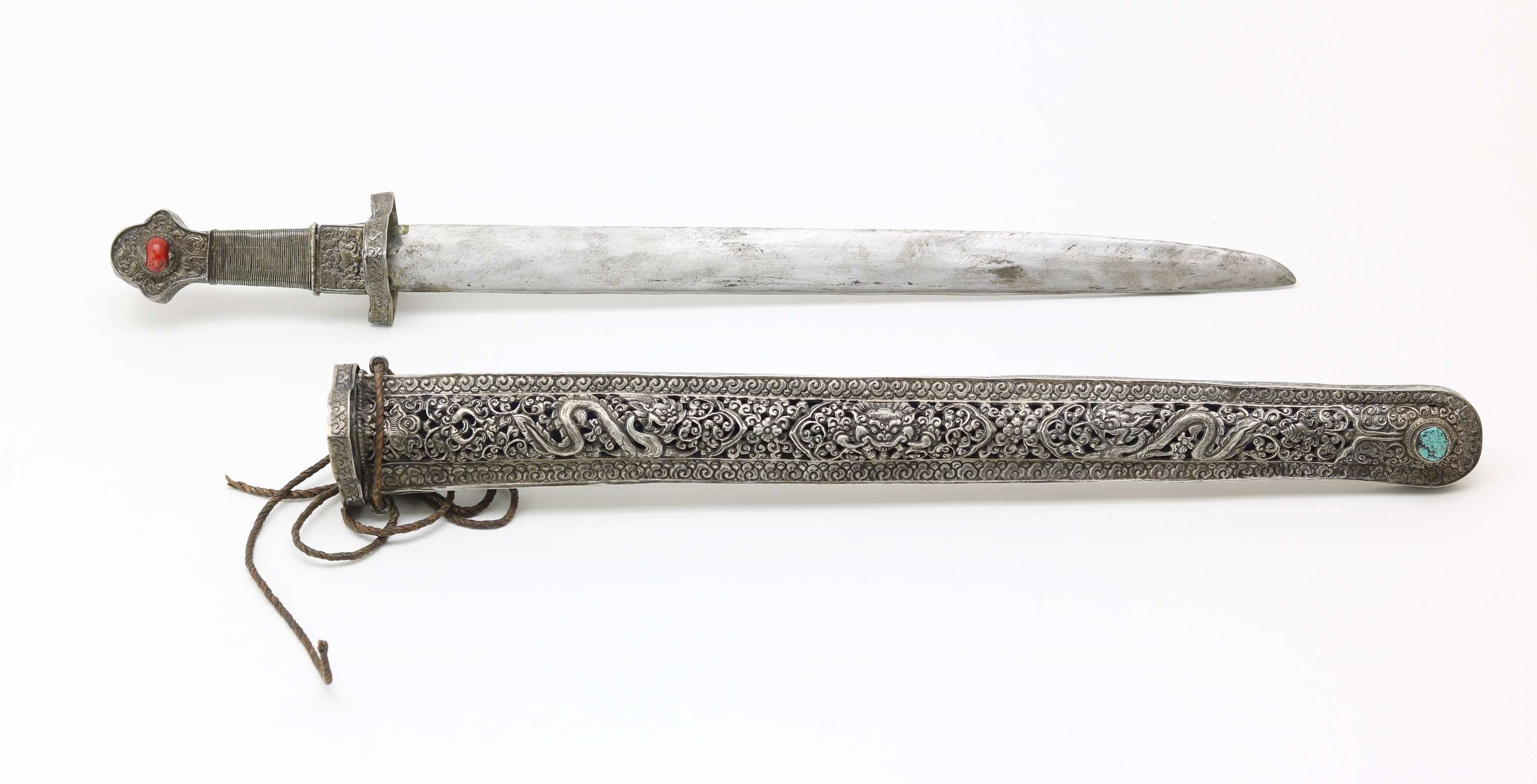 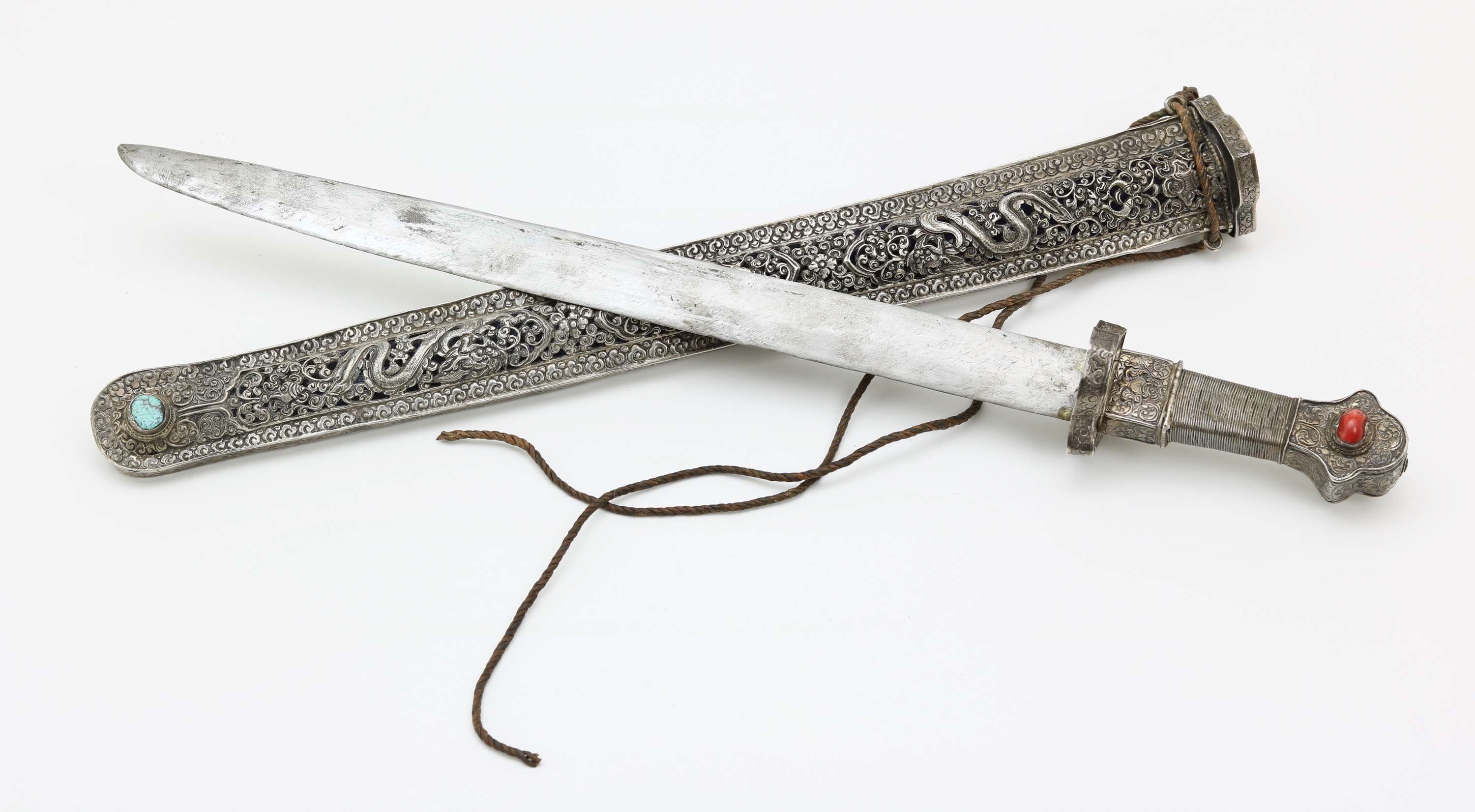