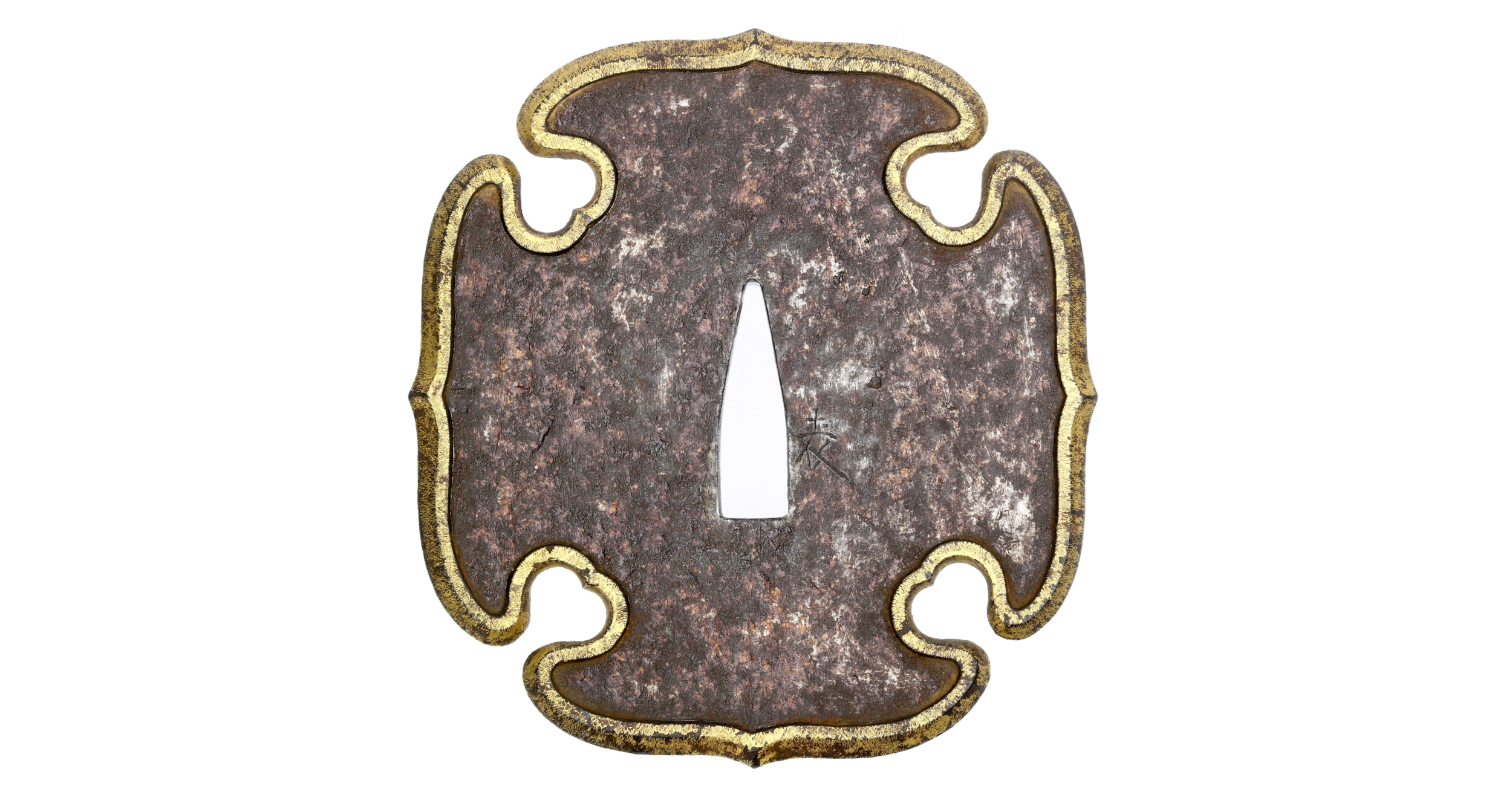 When we hear "nanban" in relation to tsuba it is often a referral to a piece with strong foreign influence. In this case, the style is purely Japanese, and it is only the material that is foreign.

This style of tsuba was since ancient times mounted on tachi (太刀), large swords that were worn edge downwards, slung from a belt, mainly by cavalry.

Large scale prouction of tachi stopped around 1600 when armies started to rely more on infantry but production did continue in smaller numbers, often sumptuous pieces for high-ranked samurai.

A Japanese sword guard or tsuba of an aoi-gata meaning "hollyhock-shaped".

It is made entirely of steel with a raised, facetted rim that is damascened in gold. No hitsu-ana. The rim of the nakago-ana is undistrubed which indicates it has never been mounted and was probably intended as a gift.

Each side seems to have been covered with some lacquer or vasnish at some point, perhaps to keep the steel from patinating.

The alignment of the blade in relation to the signature tells us that this piece was made for use on a handachi (半太刀) or "half tachi", a hybrid between the uchikatana and the tachi that became popular nearing the end of the Muromachi period (1336 – 1573).

On the facing side is written: omote (表), or "facing side". It means that this side was facing the hilt when mounted.

On the reverse side is written nanban tetsu (南蠻鉃), or “southern barbarian steel".

Various sword and spear blades are known with inscriptions of them being made of nanban tetsu or “Southern-barbarian steel”. The word referred to foreigners that typically came sailing to Japan from the south, and basically just means "foreign".

This means that the term nanban stood for the new, the exotic flair and for fascinating items which had never been seen before, even if some things like steel did not come from that far." 1

Swordsmiths like Hizen Tadayoshi, Kunikiyo and Yasutsugu and were known to use this steel for their swords and inscribe it on the tangs. See for example a Yasutsugu auctioned at Christie's.

The exact origins of the steel are unknown, and there may have been various sources. The first generation Yasutsugu may have worked with materials from the Dutch ship "de Liefde" which stranded in 1600, its contents many iron objects including 18 cannon that came into the possession of Ieyasu Tokugawa (1543-1616), the first shōgun of Japan, by whom Yasutsugu was directly employed.2

Other sources may have been scrap metal ballast from Dutch trading ships, and there are also references to the Japanese importing steel from China, Thailand and even wootz steel from India.3

Swords inscribed as being made using nanban tetsu are predominantly made in the early 17th century, up to around the Kanbun era of 1661-1667.

Sword guards that state they are specifically made of nanban steel are very rare and probably date from around the same period.