A rare and early Tibetan sword

A very rare and early type of Tibetan sword with some fascinating design features. The short and stout single-edged blade is ground flat on the right side and with a chisel edge on the left. Blade with typical Tibetan forging pattern called "hairpin forging". The apex of the fold is normally situated near the tip, but on this example there is a second hairpin fold near the handle, too. Blades with this feature are still produced in Yigong, Eastern Tibet.

The hilt consists of two iron mounts with a lozenge-shaped cross-section and a waisted wooden handle of similar cross-section. The pommel has three cone-shaped protrusions, a stylistic element associated with Kham territory, eastern Tibet. The fittings are pierced with scrollwork on one side, engraved on the other. The handle is covered with ray-skin. The obverse side of the handle is studded with a series of eye-shaped brass plates, eight in total. This reminds strongly of the single edged straightswords worn by Qing imperial attendants during so-called "Auspicious Ceremonies". These swords were designed by the Qianlong emperor who -a Tibetan Buddhist himself- took inspiration from Tibetan examples: The wooden scabbard is covered with thin black leather. It has three ribs in the center on the front side. The bottom part is fitted with a U-frame and between the frame is a pierced front plate with peaked top. This configuration is familiar to most from Bhutanese daggers. The plates are elaborately pierced and chiseled on the front side with fine scrollwork among which can be seen a deer and a dragon. On the back are engravings of stylized clouds. All iron fittings with remains of golden damascening.

Various stories explain the significance of the deer in Tibetan Buddhism. One is that the Buddha would have given his first sermon in deer park. Another is a story about a deer king who wanted to sacrifice himself to a hunter, instead of having the hunter kill the mother of a young fawn. Impressed with this feat, the hunter killed neither, swore never to hunt again, and became a Buddha.

Only one similar published example is known to me at this point.1 It is held in the Metropolitan Museum under accession number 36.25.1465a, b. This beautiful example is very well-preserved with most of the gold intact. It is dated 16th to 18th century. It differs in a few ways from ours: It does not have the cone-shaped protrusions on the top of the handle that are so typical of Kham area swords, and the metalwork on the scabbard is more formalized and repetitive, only floral in nature without dragon or deer such as on ours.

Despite the similarities in general appearance, it seems that ours is from a different period. Metalwork of Tibet evolved over the centuries, and when looking purely at the stylistic elements of this piece we see, among others:

The stylistic features of the scrollwork mentioned above, combined with the elements we see on the dragon on this scabbard, are seen on:
-A set of saddle plates, Tibetan or Chinese, c.a. 1400. Featuring all dragon similarities.5
-A cup case, Eastern Tibetan, 15th century. Identical dragon, except it doesn't grasp pearls but its own body.3
-A set of saber fittings, Tibetan, 15th - 16th century. Reproducing all features of scrollwork and dragon.6

Conclusion on dating
Considering the above, the piece most likely represents an earlier version of the example in the Metropolitan Museum, accession number 36.25.1465a, b. Comparing it with other examples of Tibetan pierced ironwork, the style seems typical for such ironwork produced in the 15th and 16th centuries.

The overall style is what we now know as Bhutanese and also the dragon holding pearls would point to Bhutanese origin. However, the pommel with three cones is decisively Tibetan, Kham region to be precise. The city of Derge in Kham, the center of the Kingdom of Derge since the 15th century, was well-known for its high level of pierced metalwork. Craftsmen enjoyed the patronage of the king, and most craftsmen resided around palaces of monasteries. Due to the proximity to Bhutan both geographically and culturally there was quite some exchange going on. For example, the famous bridge builder Thang Tong Gyalpo was invited by a Derge king to establish the Gongchen Monastery. Its style perhaps took after Bhutanese style elements seen on swords and daggers of Bhutanese dignitaries visiting the royal palaces or monasteries that the craftsmen worked for. Alternatively, this being the earliest known example of such a style from either Tibet or Bhutan, there is a slight possibility that the style is not strictly Bhutanese but simply survived in Bhutan longer than in Tibet.

All considering, the piece is most likely made in Eastern Tibetan, Kham region, possibly Derge.

Gold is mostly worn off. Scabbard wood in sound condition, some losses to the leather here and there. Ray-skin has shrunk over time. All parts are tight. Otherwise in remarkable condition for its age. The blade may be a somewhat later replacement because the hairpin lamination doesn't tend to turn up on really early swords. It is a very good fit in its scabbard though.

A very rare type of Tibetan sword with elaborately pierced metalwork fittings that place it well into the 15th or 16th centuries. It combines stylistic elements from the Bhutanese as well as Tibetan culture of the Kham region. It is one of the earliest examples of such metalwork. 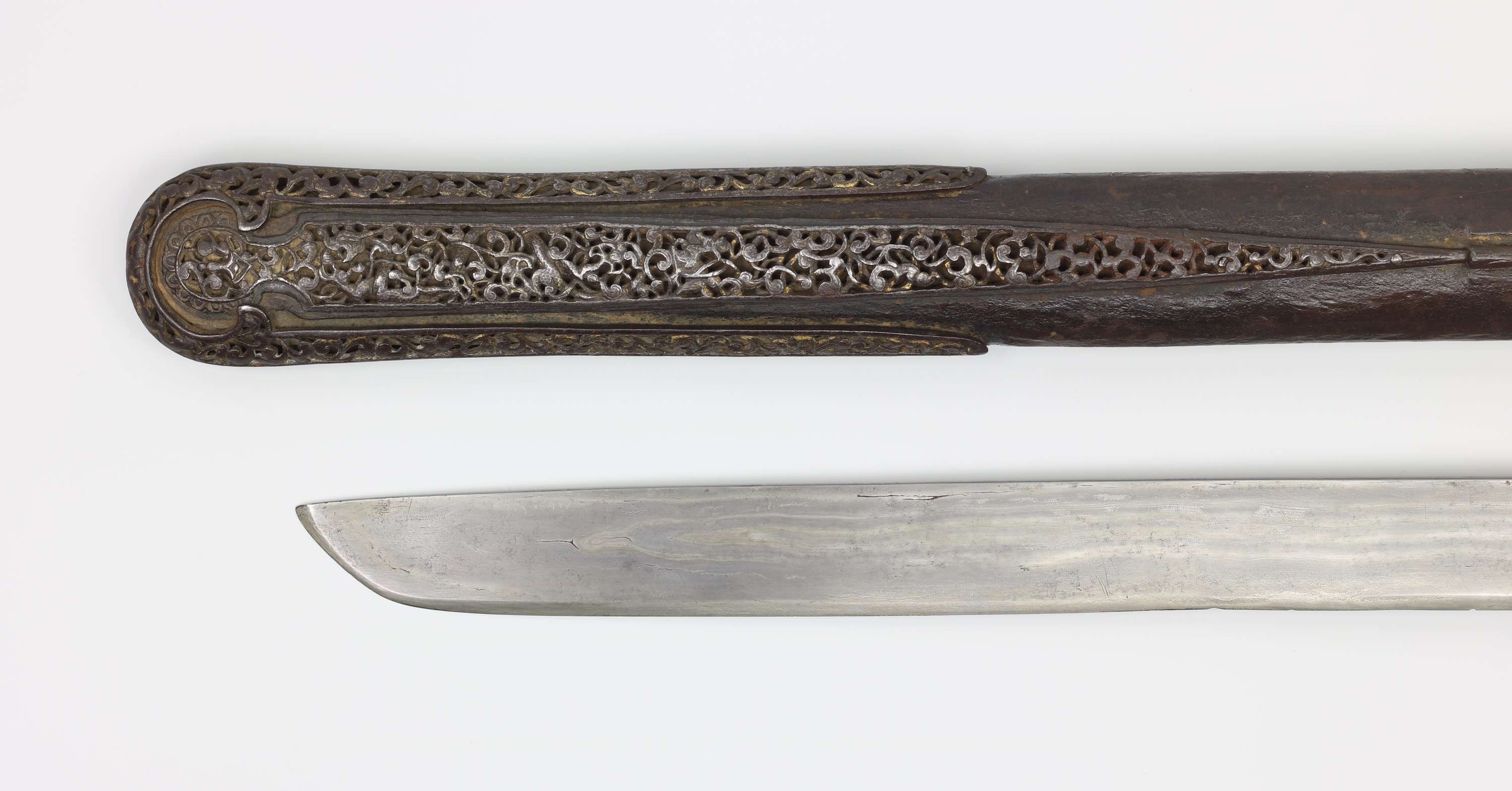 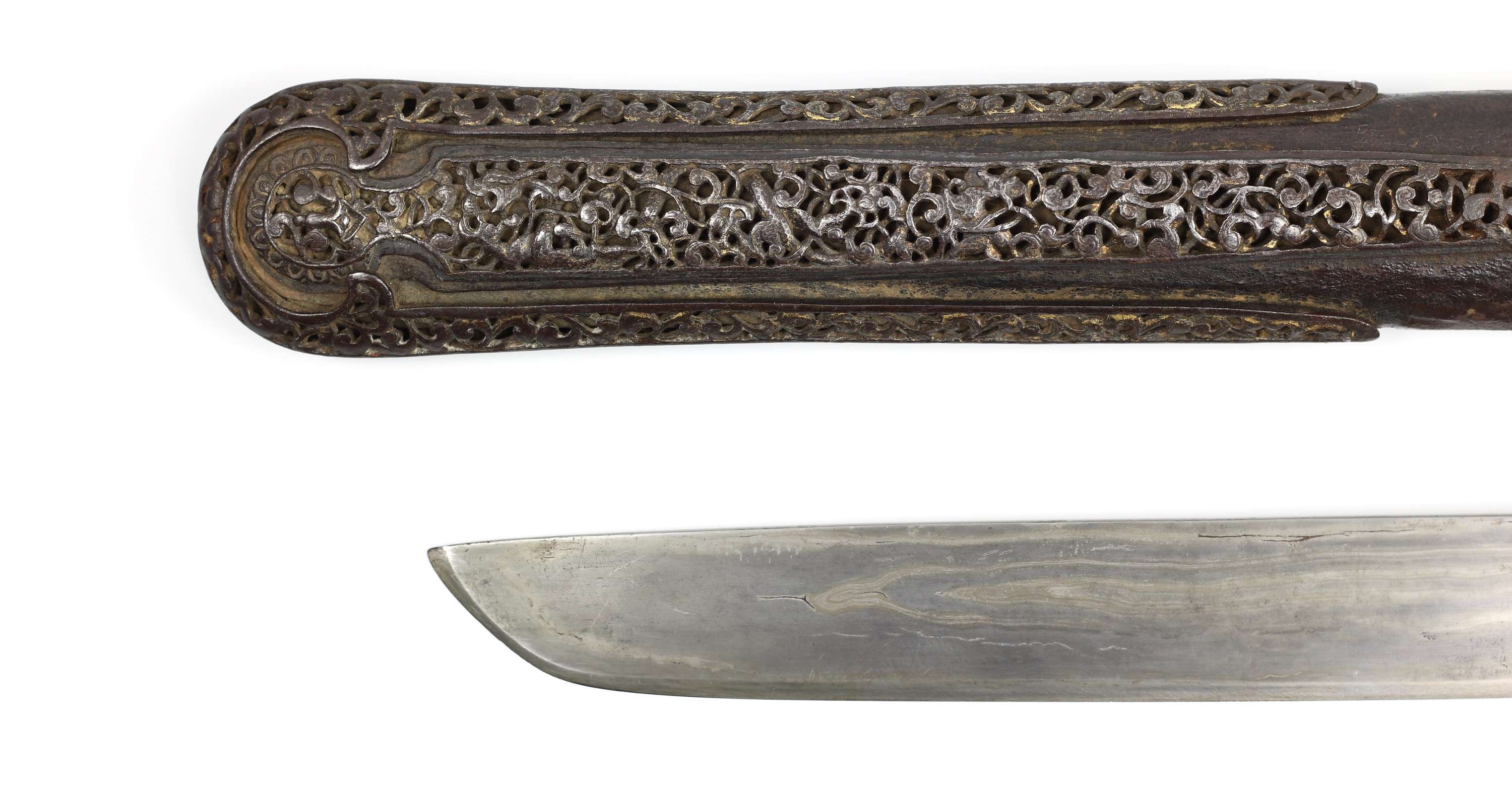 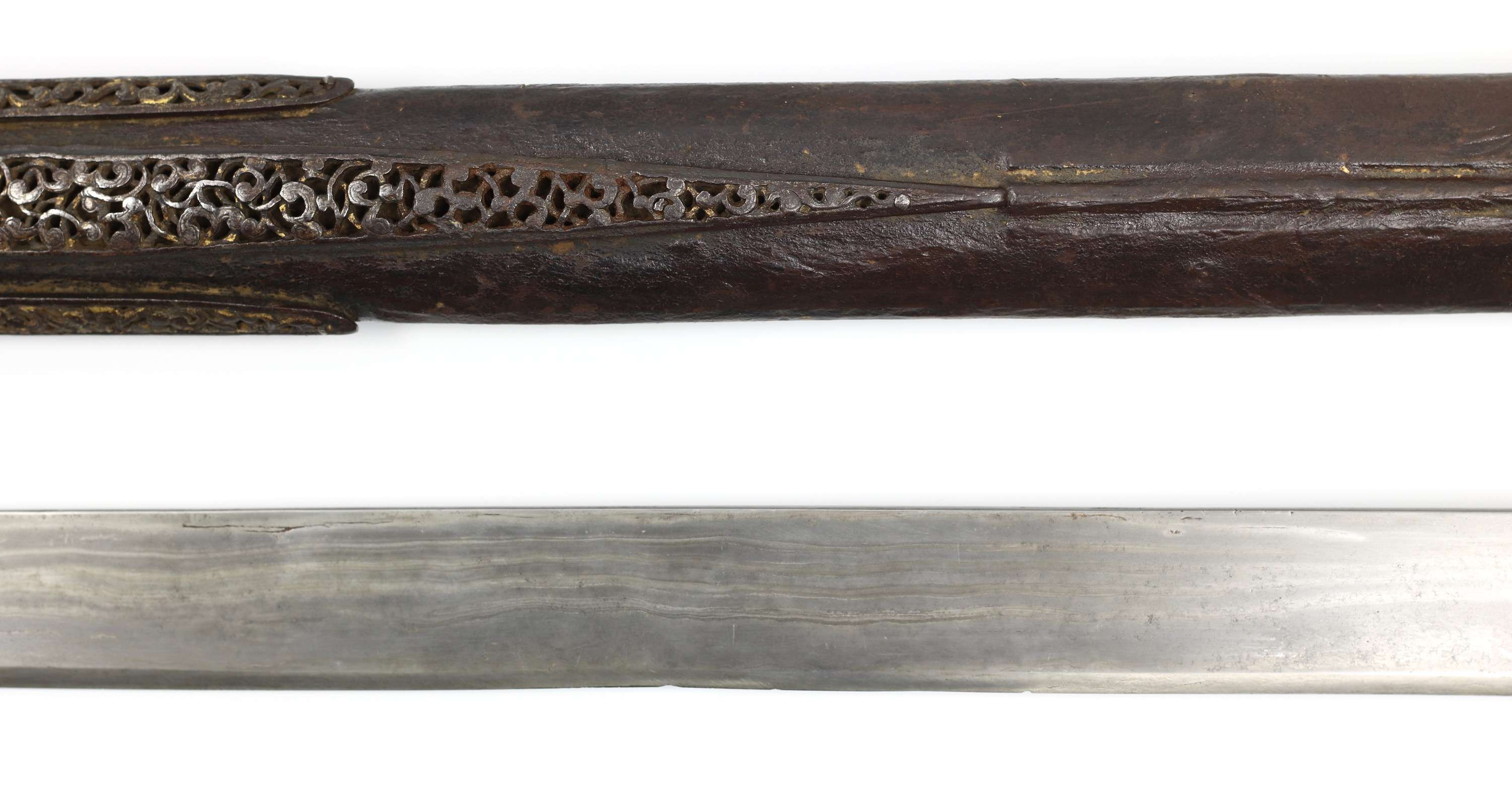 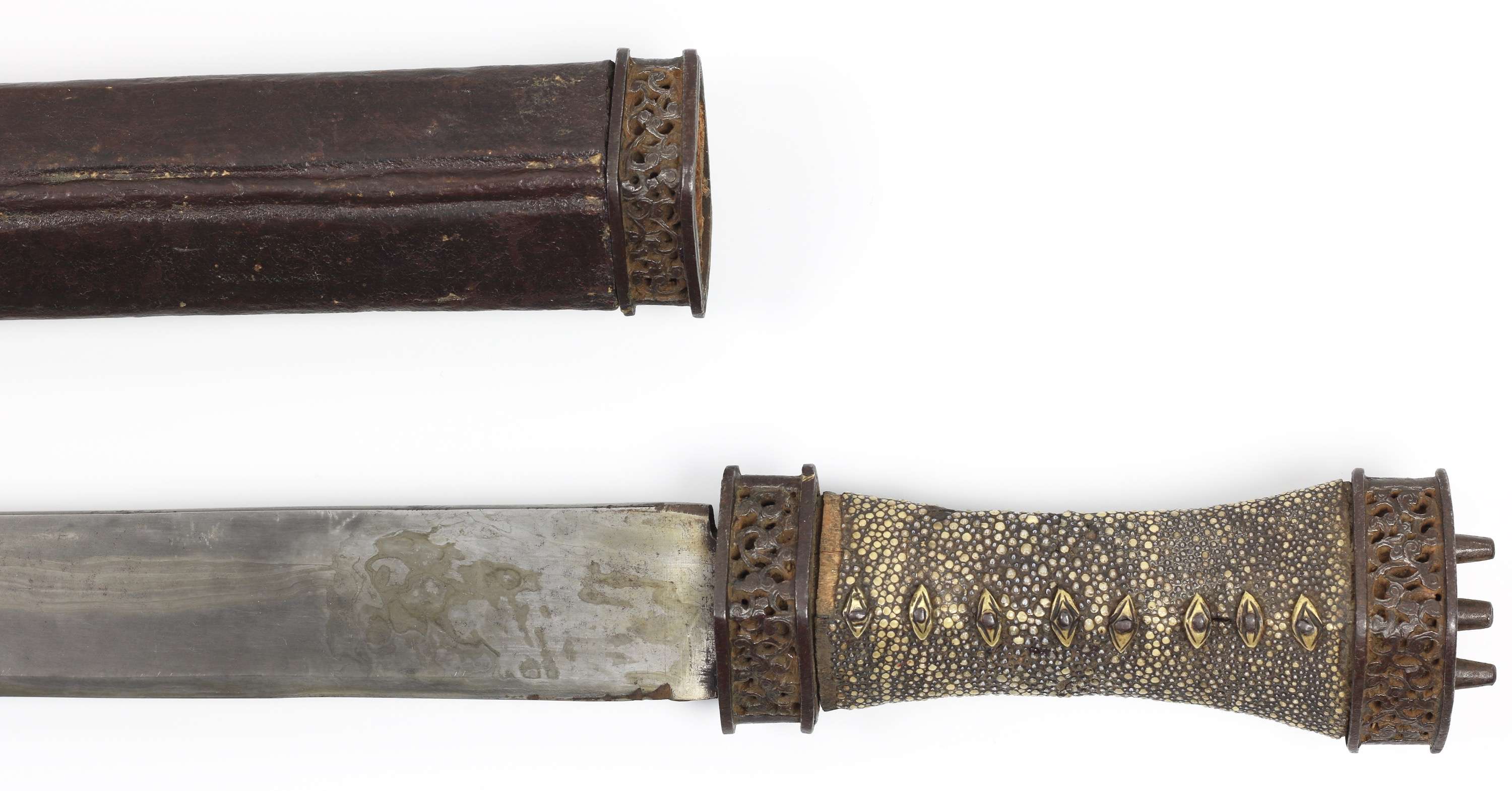 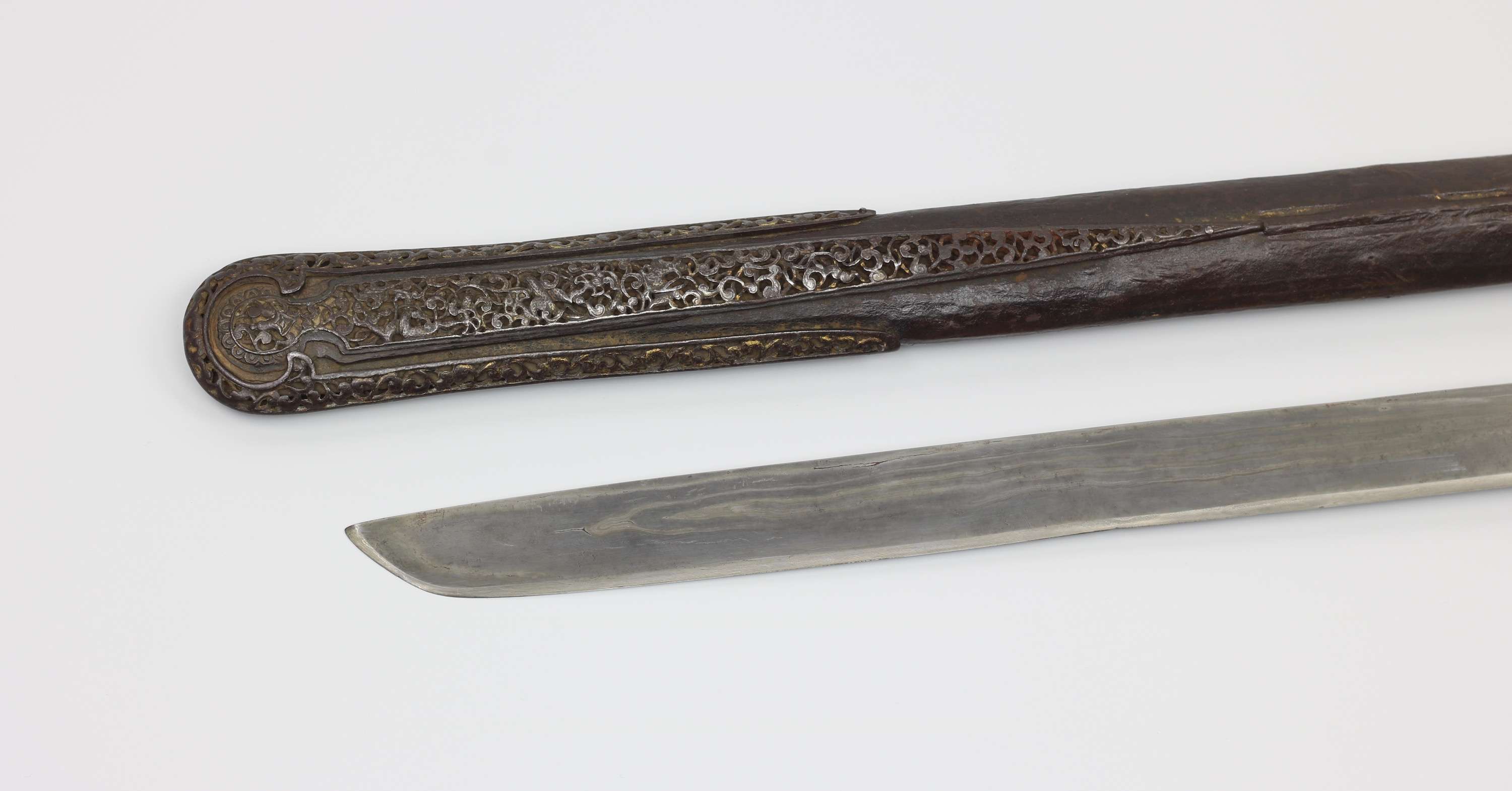 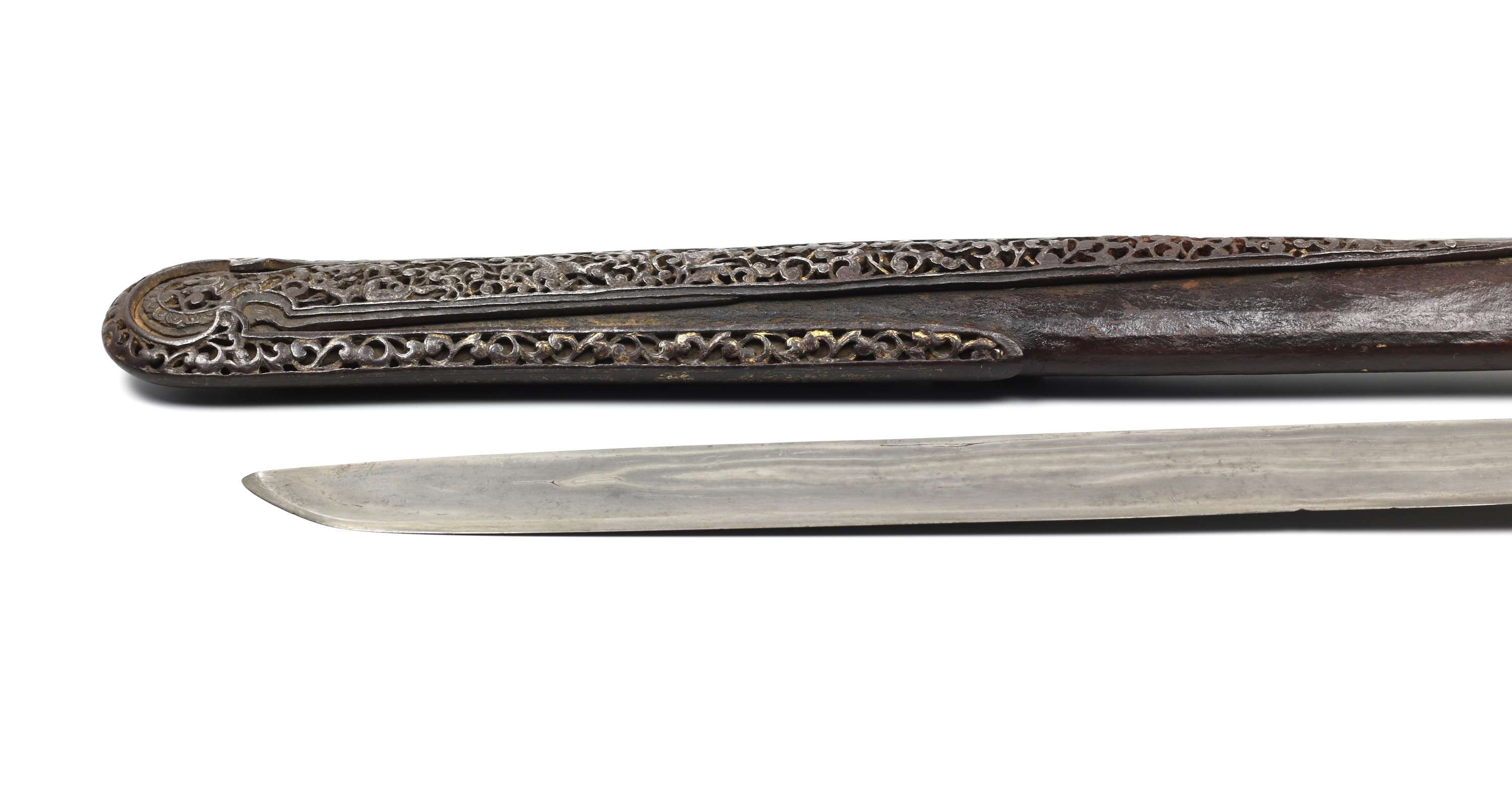 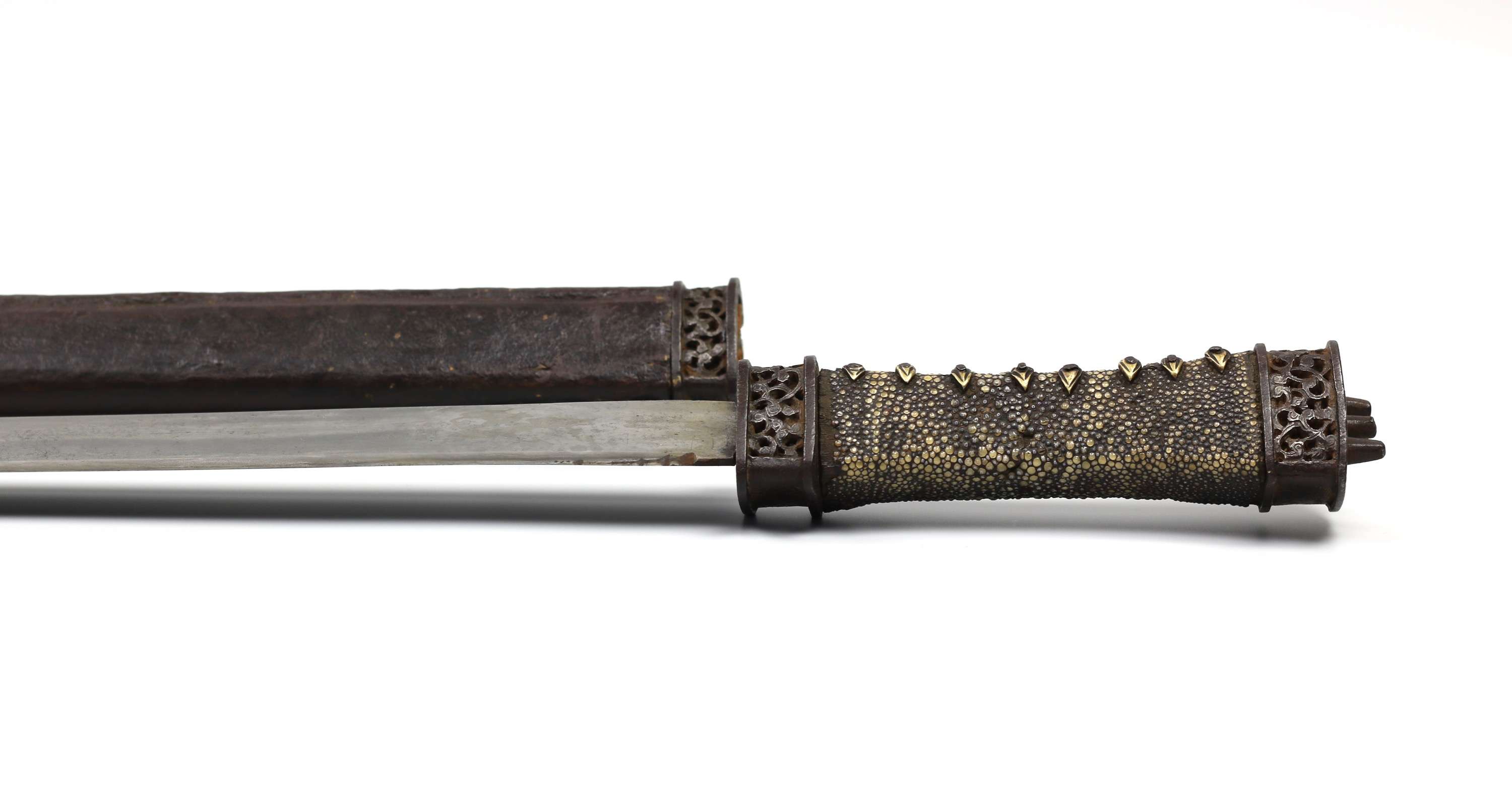 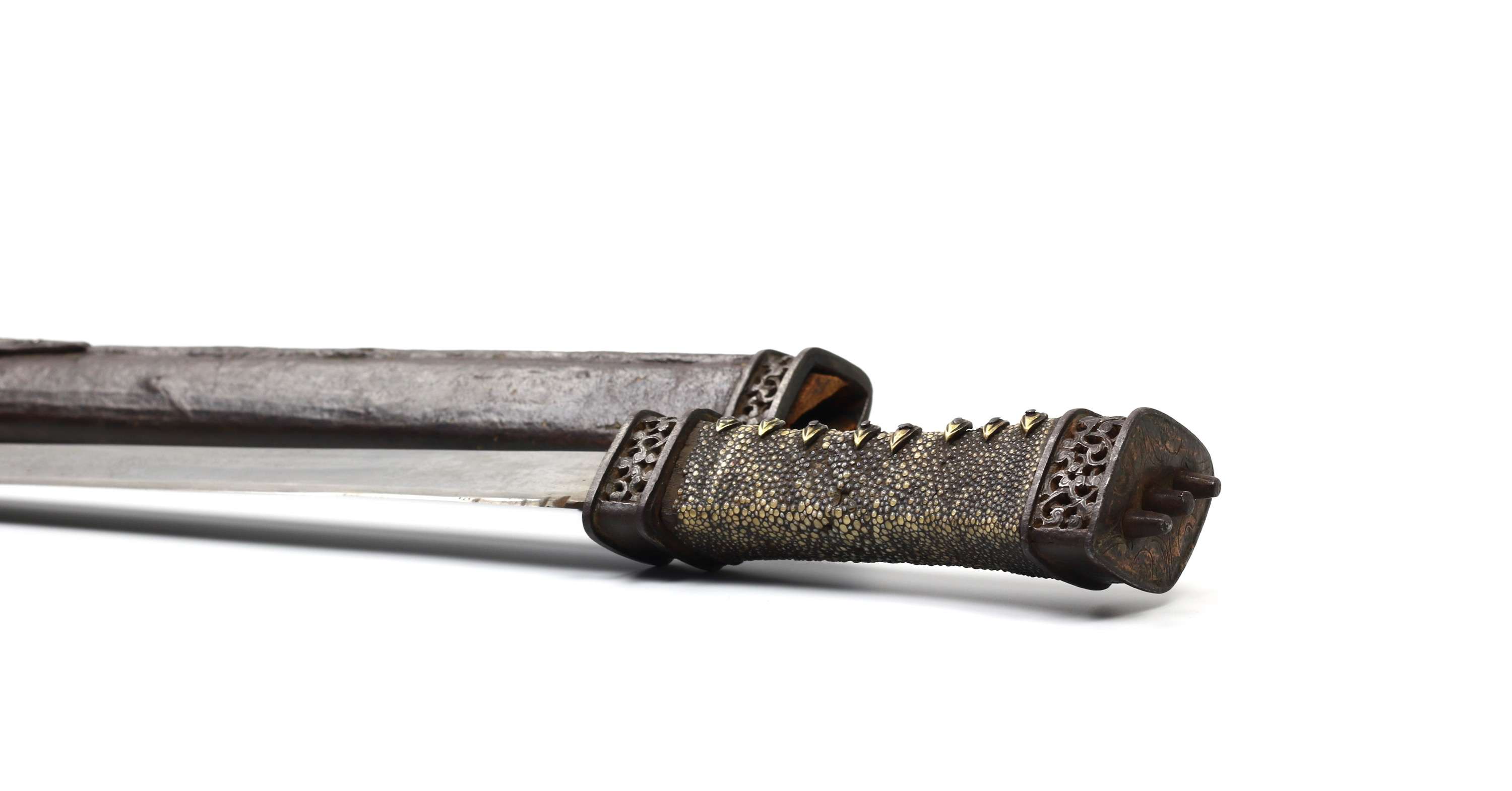 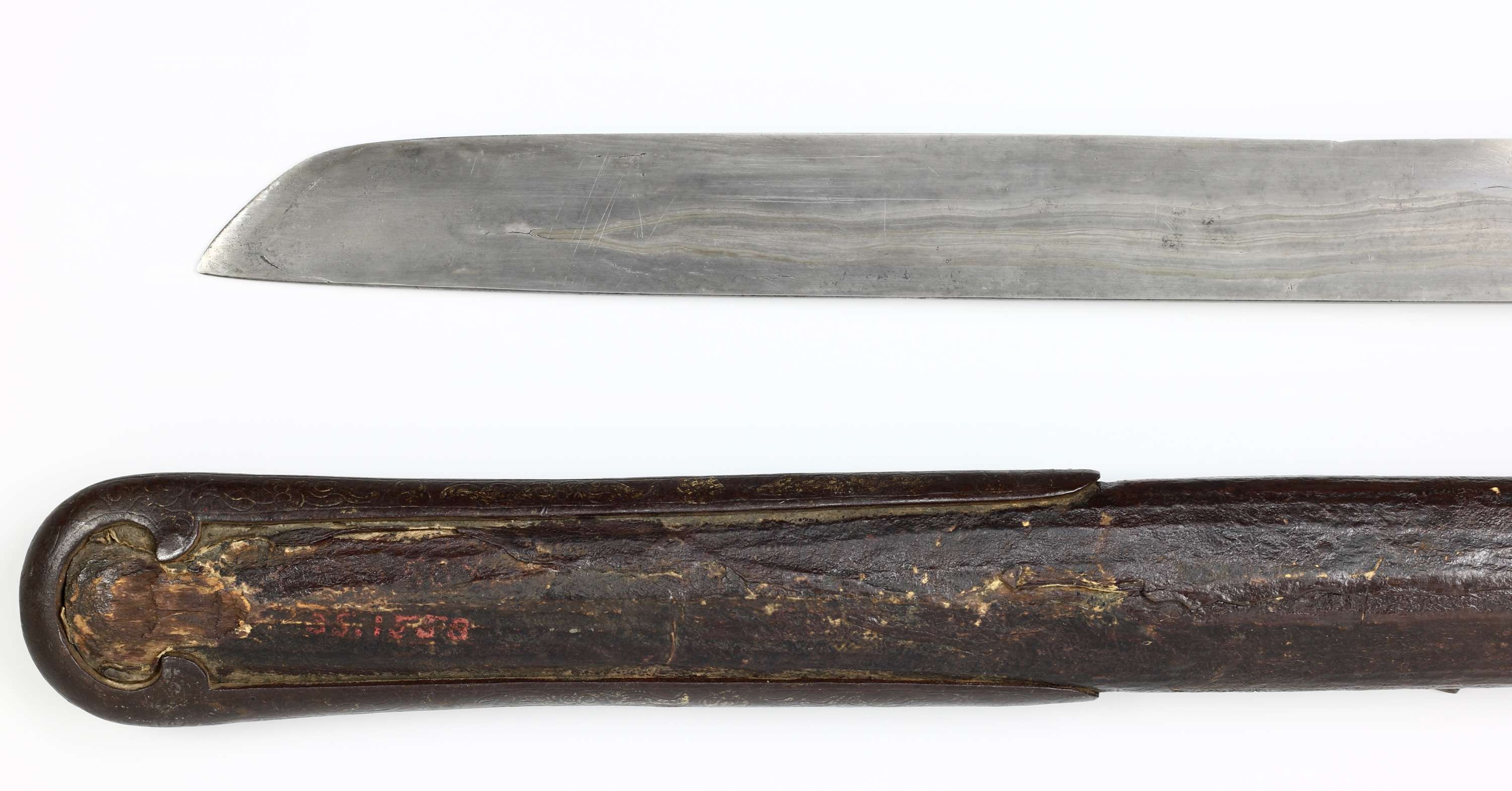 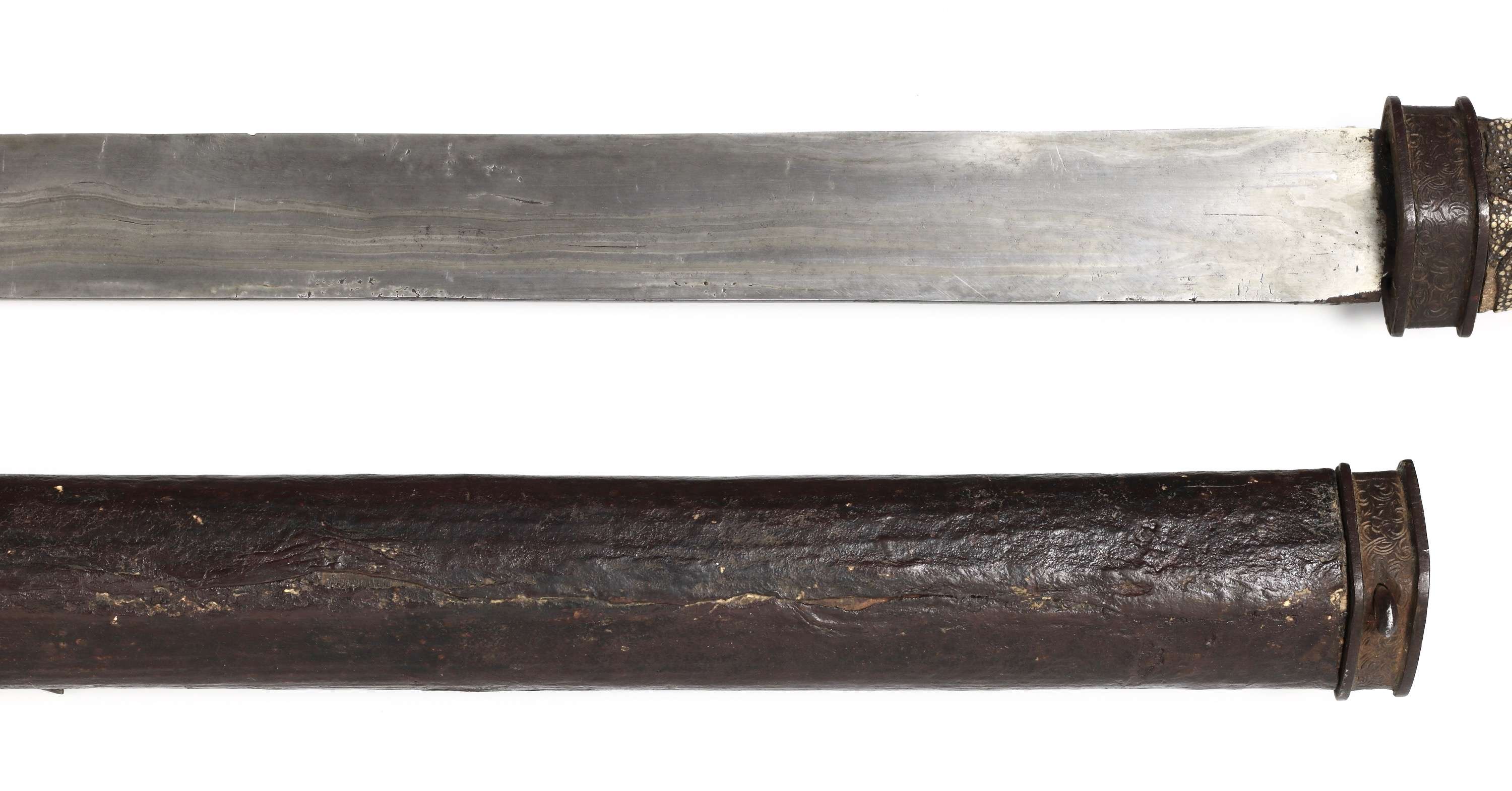 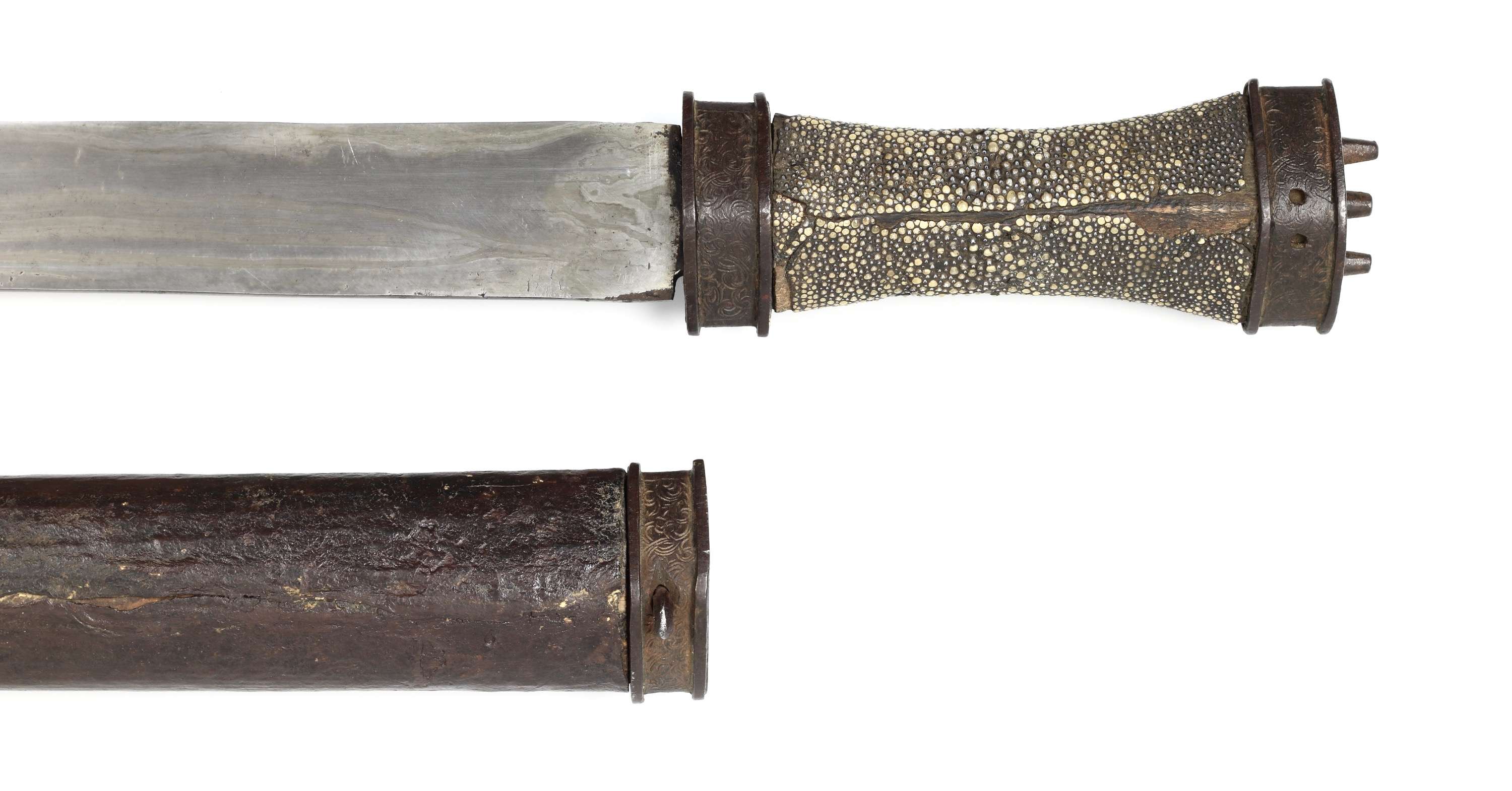 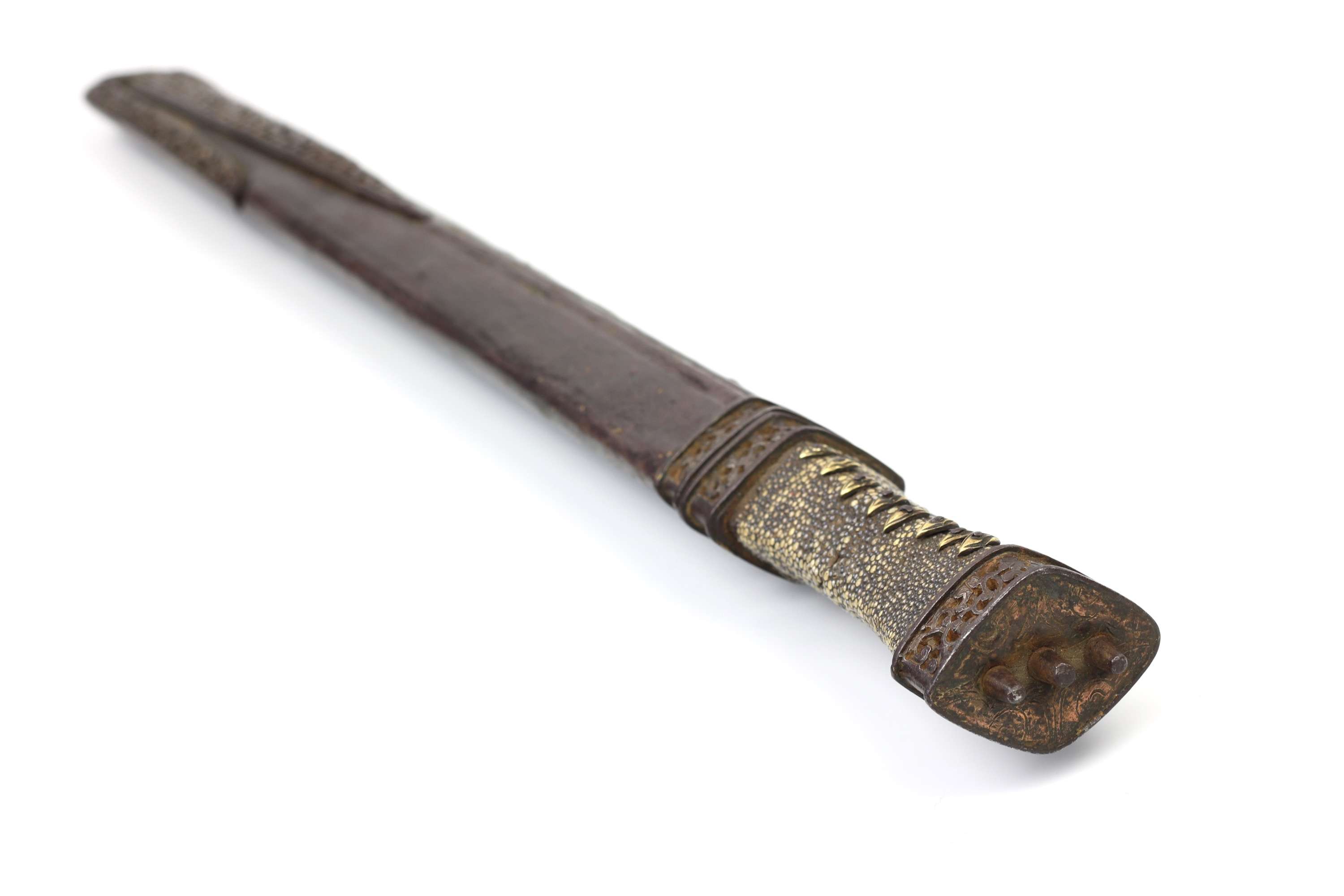 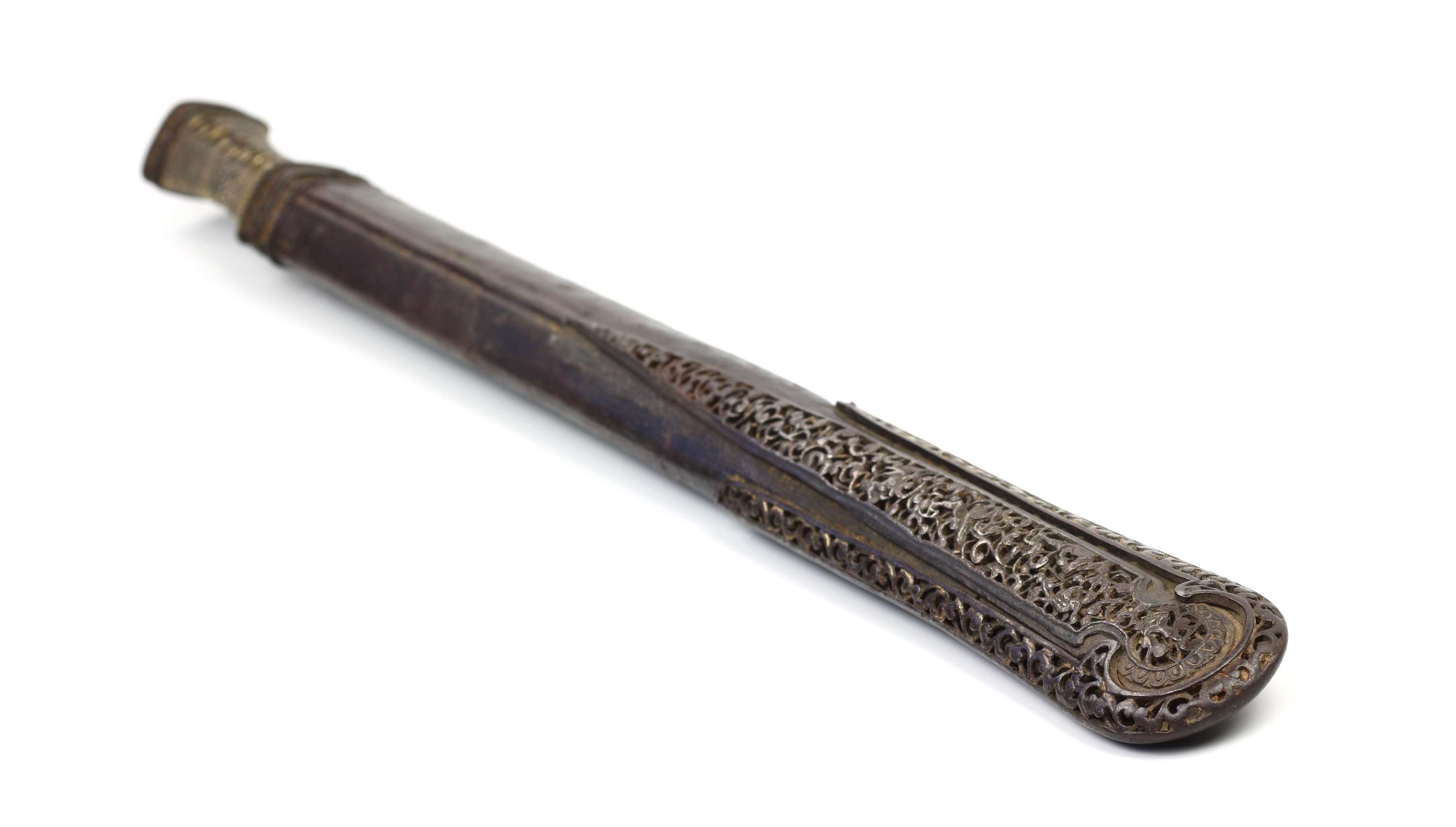 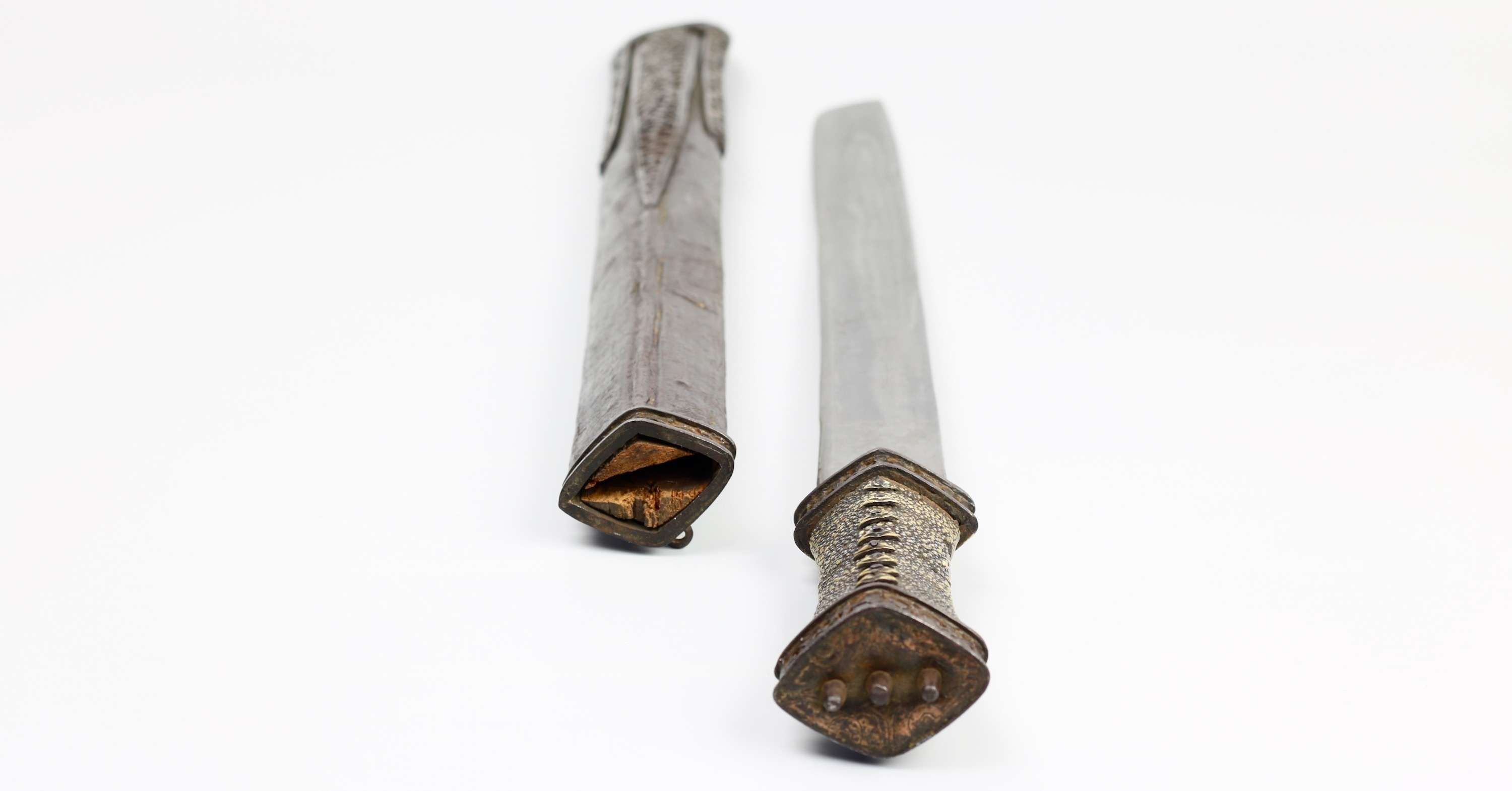 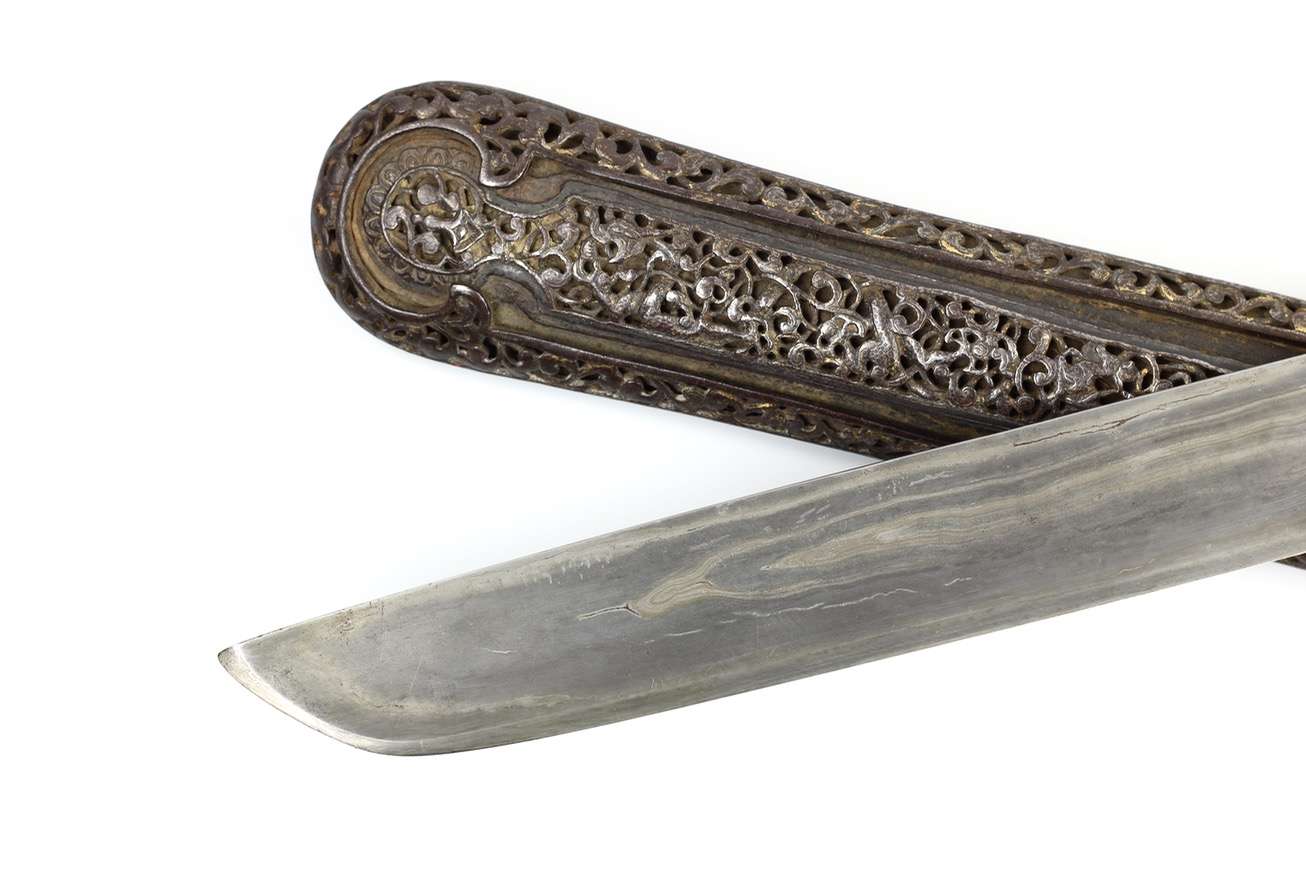