From the Steen Strømberg collection, Copenhagen.

A very good example of a Tibetan dpa'dam in its archetypical form. Such swords were worn by Tibetan chieftains and royalty, usually on the left side stuck through the sash, edge up.

It stands out high above all others in the quality of execution of its various parts, completeness, and near-perfect state of preservation.

Blade
It has a long, single-edged blade with oblique point. The blade exhibits a number of dark lines of so-called "female iron" or mo lcags forged into layers of lighter "male iron" or pho lcags. The light steel has a higher carbon content, making the hard parts of the sword -including the edge- while the softer steel adds toughness and resilience to the construction. Many cultures have devised similar ways to make swords out of different types of steel. What sets the Tibetans apart is that their smiths worked in high altitudes with low oxygen levels and limited fuel, making it more difficult to heat large forges to high temperatures. As a consequence, they devised ways to weld the layers together using a minimum of heat, stacking the layers instead of folding them. This results in the typical "hairpin pattern", named so after the hairpin-like shape of its various layers. This particular sword is a very well-made example of this construction, exhibiting not only the typical hairpin layers but also signs of a differential heat-treatment along the edge, much like the "hamon" found on Japanese swords.

Hilt
The hilt has a wooden handle, tightly wrapped with silver wire. It has a trefoil pommel, its obverse damascened with silver and engraved with floral motifs. The sides are decorated with a repeating swastika motif. These elements are repeated on the ferrule. It has a shallowly cupped guard made up of a double trefoil shape with a cusped edge on one side. The pommel holds a coral, highly prized objects in landlocked Tibet. The handle retains its original braided leather wrist lanyard or dpa'lung.

Scabbard
The scabbard consists of two wooden plates, covered with deep green grained leather, held together by an iron U-frame. Fit and finish of the U-frame are impeccable. Its lower part is partially pierced and gilt, its sides engraved with swastika fretwork, also gilt. The bottom of the frame holds a large silver dome-shaped "wheel of joy" (dga' 'khyil), a significant symbol in Tibetan Buddhism. Above that, a silver plate elaborately chased and chiseled in deep relief with designs of stylized waves, representing a flowing river. This plate holds three large corals, which were prized imports on the land-locked Tibetan plateau that often came all the way from the Mediterranean.

Condition
Excellent condition throughout. Every part is original, no significant losses, no repairs. Blade in recent polish to reveal effects of forging and heat-treatment.

Comparable examples
A number of similar swords have been published, many of them in the authoritative work on Tibetan arms and armor, Larocca's "Warriors of the Himalayas".1 See for example catalog number 61, Metropolitan Museum accession number 36.25.1464. It has a very similar hilt and guard, pommel fitted with a turquoise. Unfortunately, it survived without its scabbard. Dated 17th - 19th century.

Conclusion
From the notable European collection of Steen Strømberg, it is in excellent original condition and of high-quality manufacture. At the time of writing, this is the best Tibetan dpa'dam I have seen on the market so far. Of archetypical form, it represents the classic Tibetan sword as made in the 17th and 18th centuries. It compares favorably to even the best examples in museum collections.

Notes
1. Donald J. Larocca. Warriors of the Himalayas; Rediscovering the Arms and Armor of Tibet. The Metropolitan Museum of Art, New York. Yale University Press, New Haven and London. A must-have on the subject. 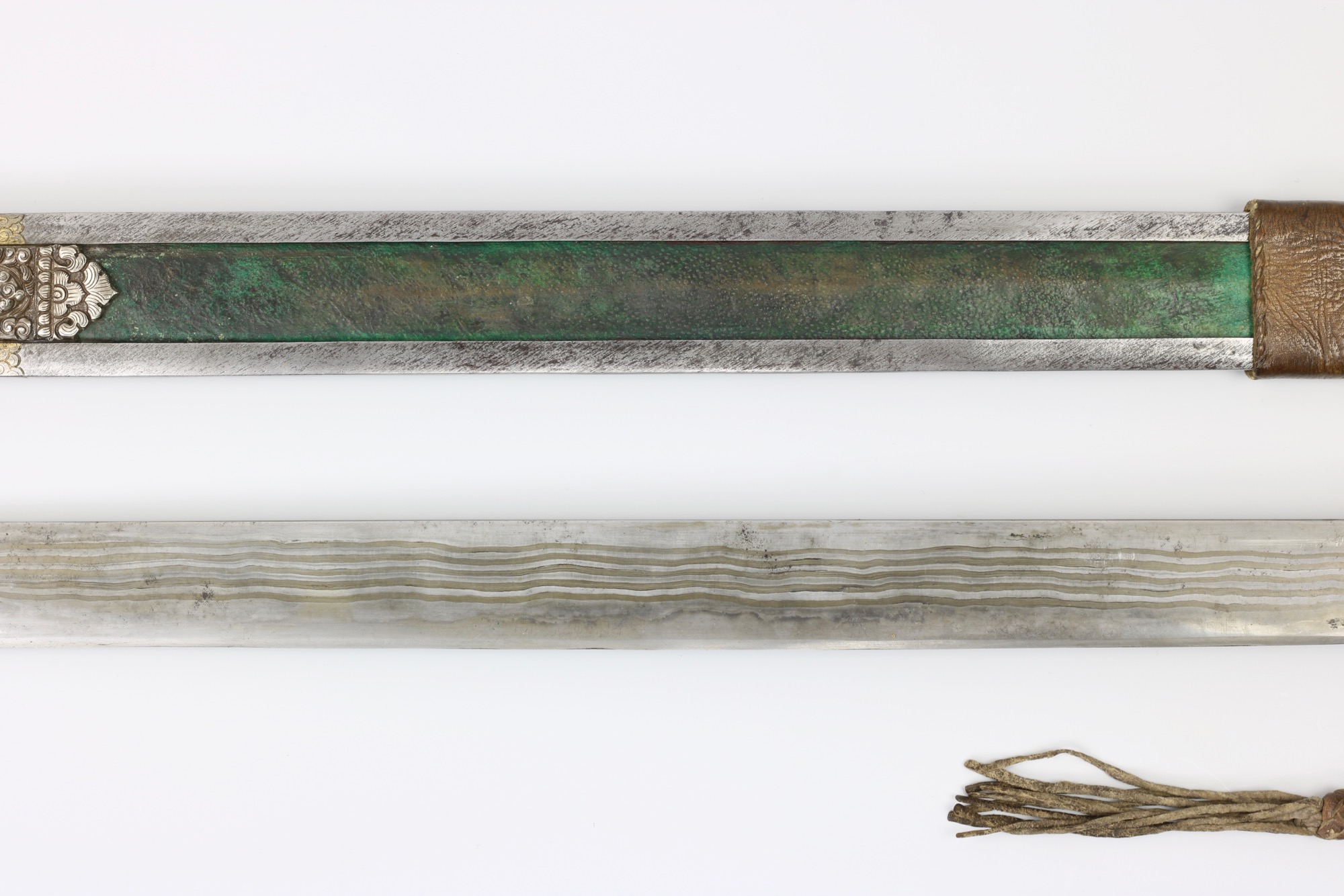 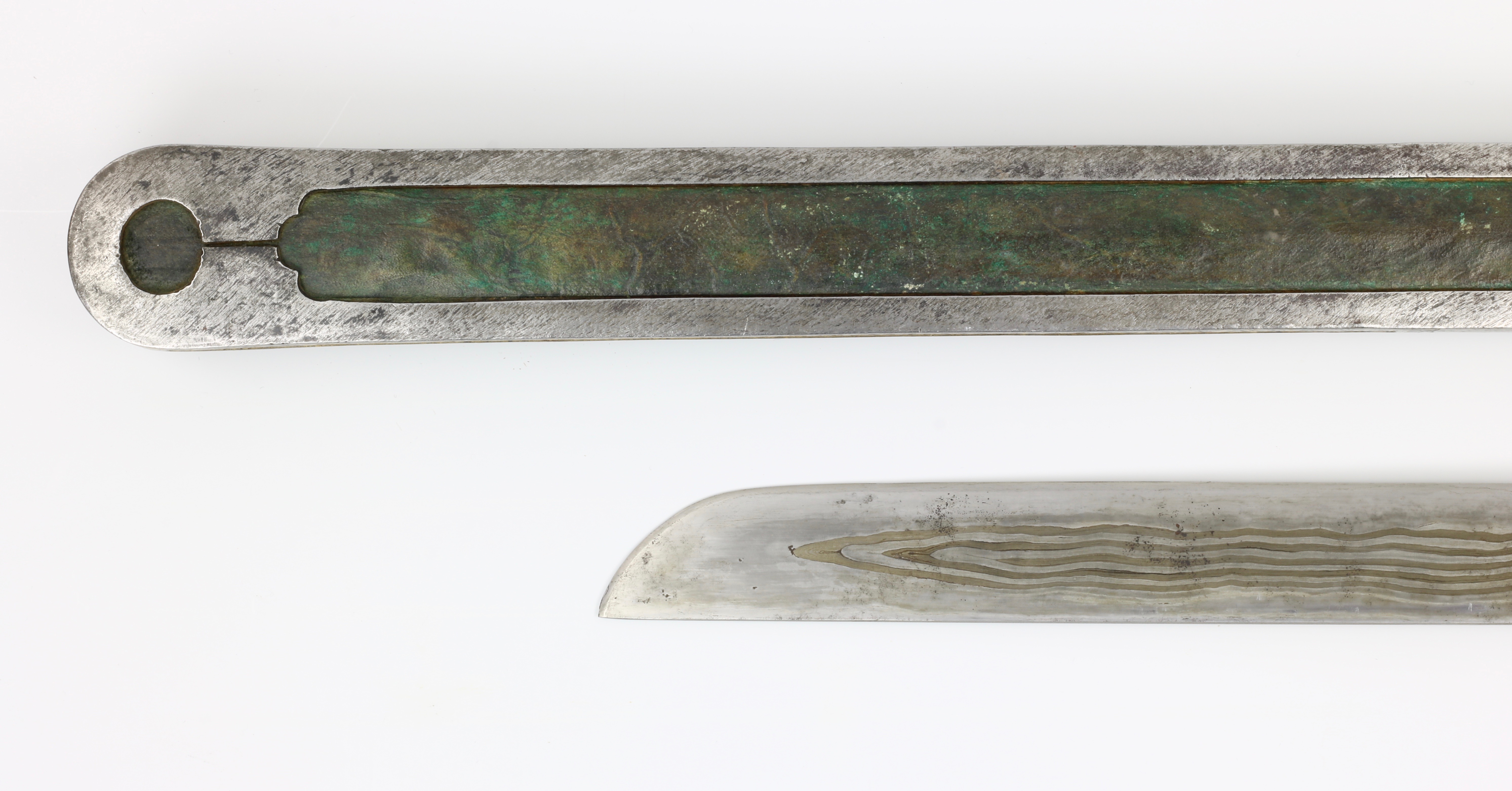 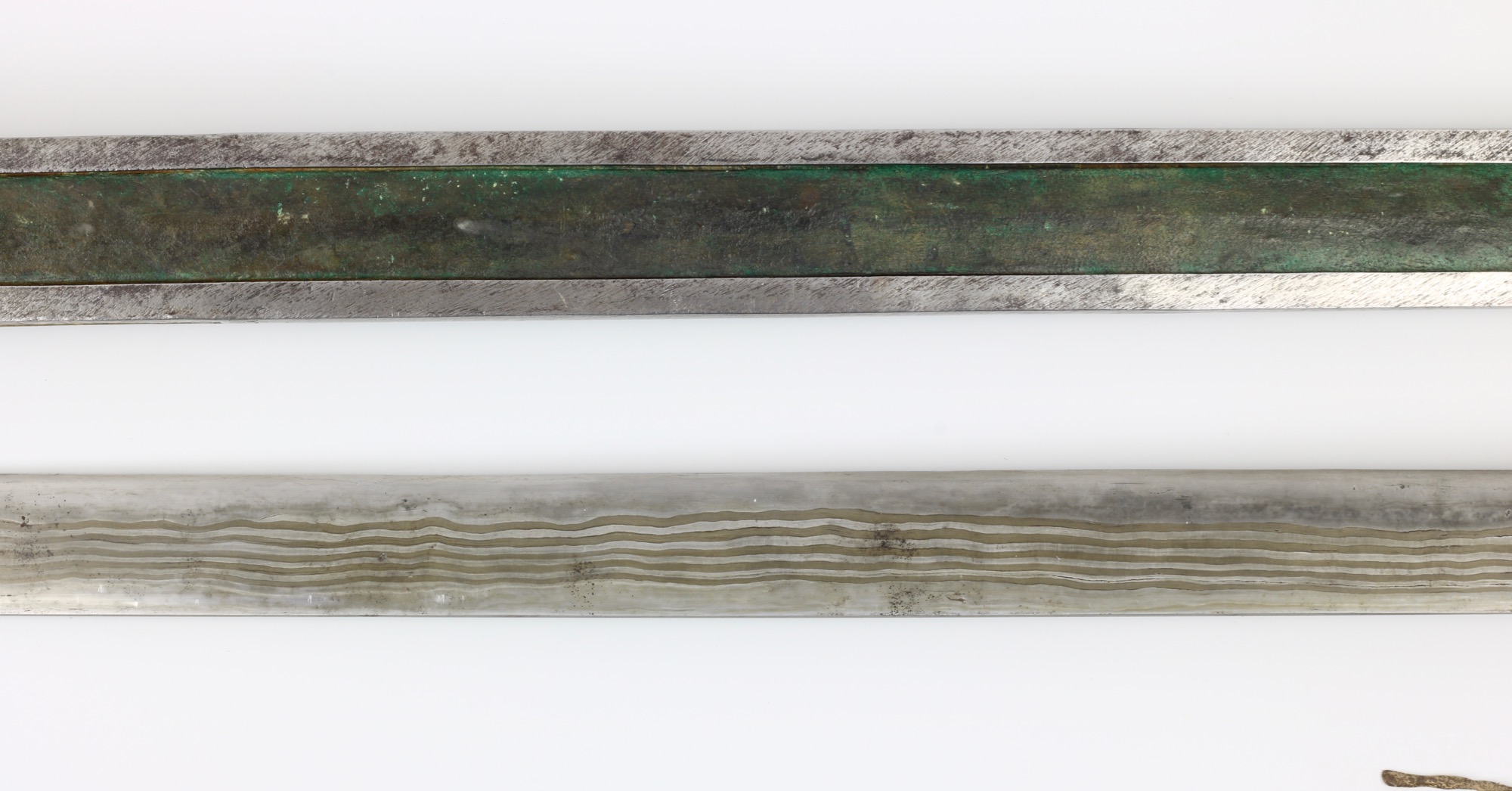 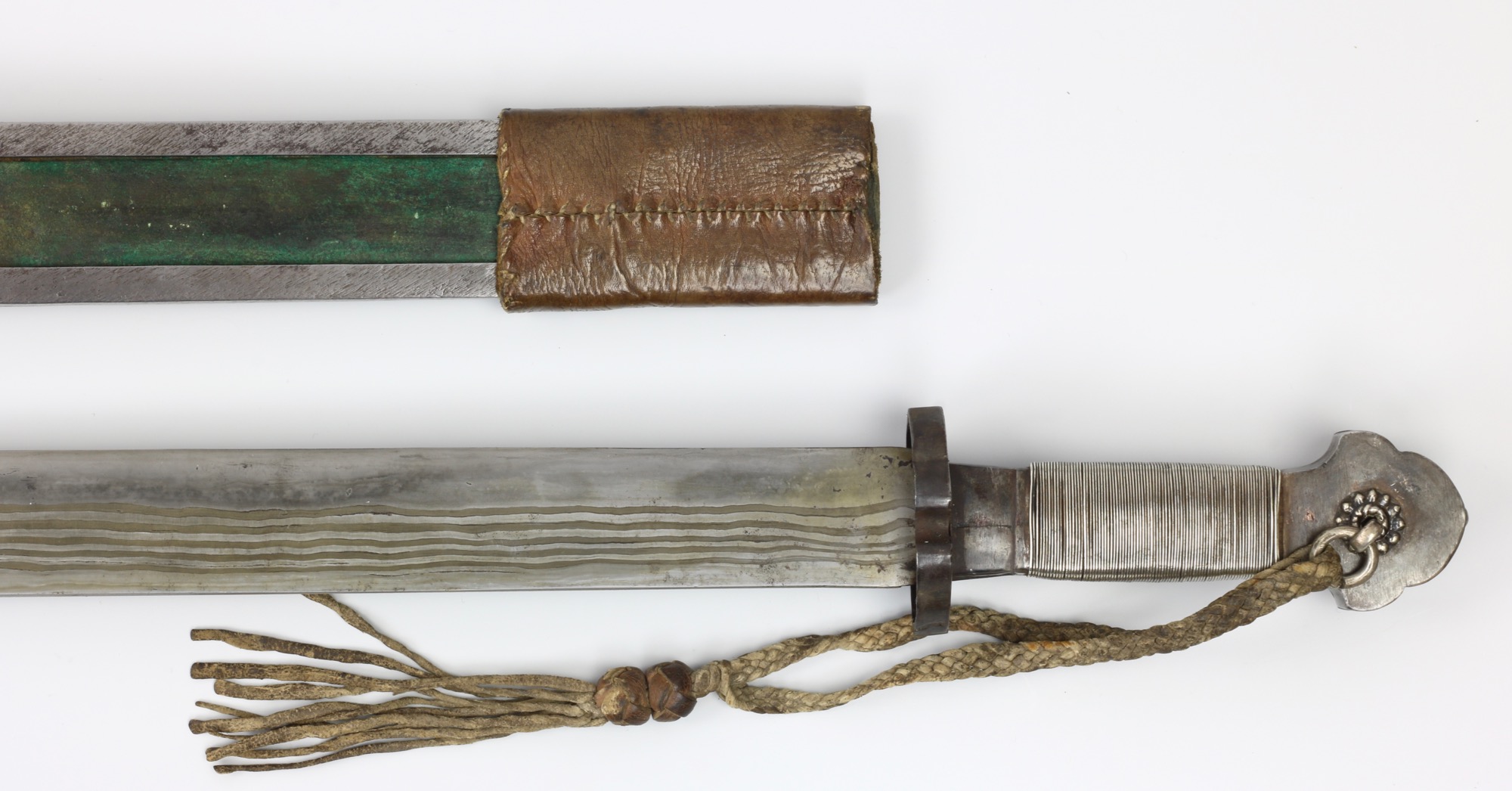 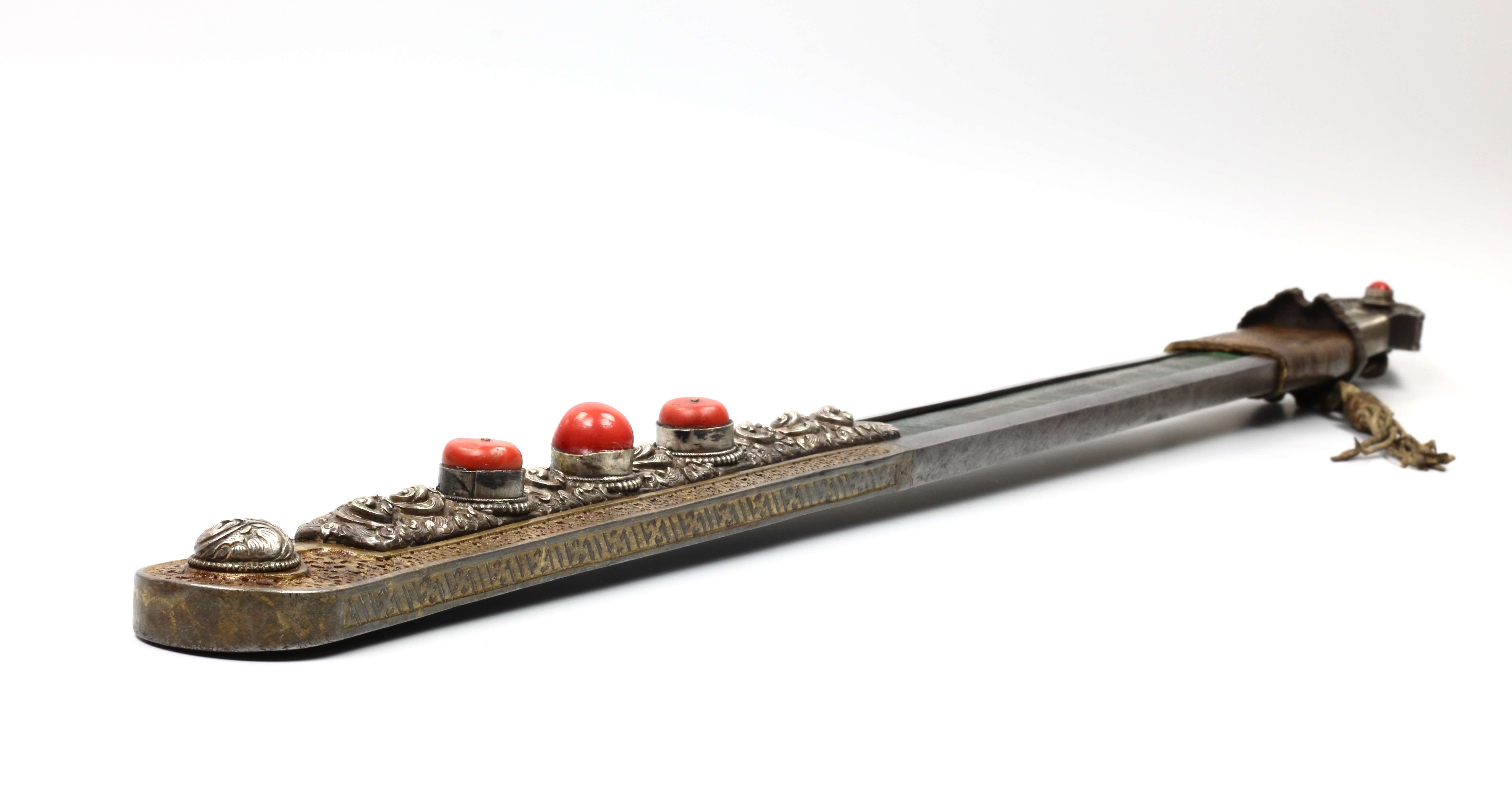