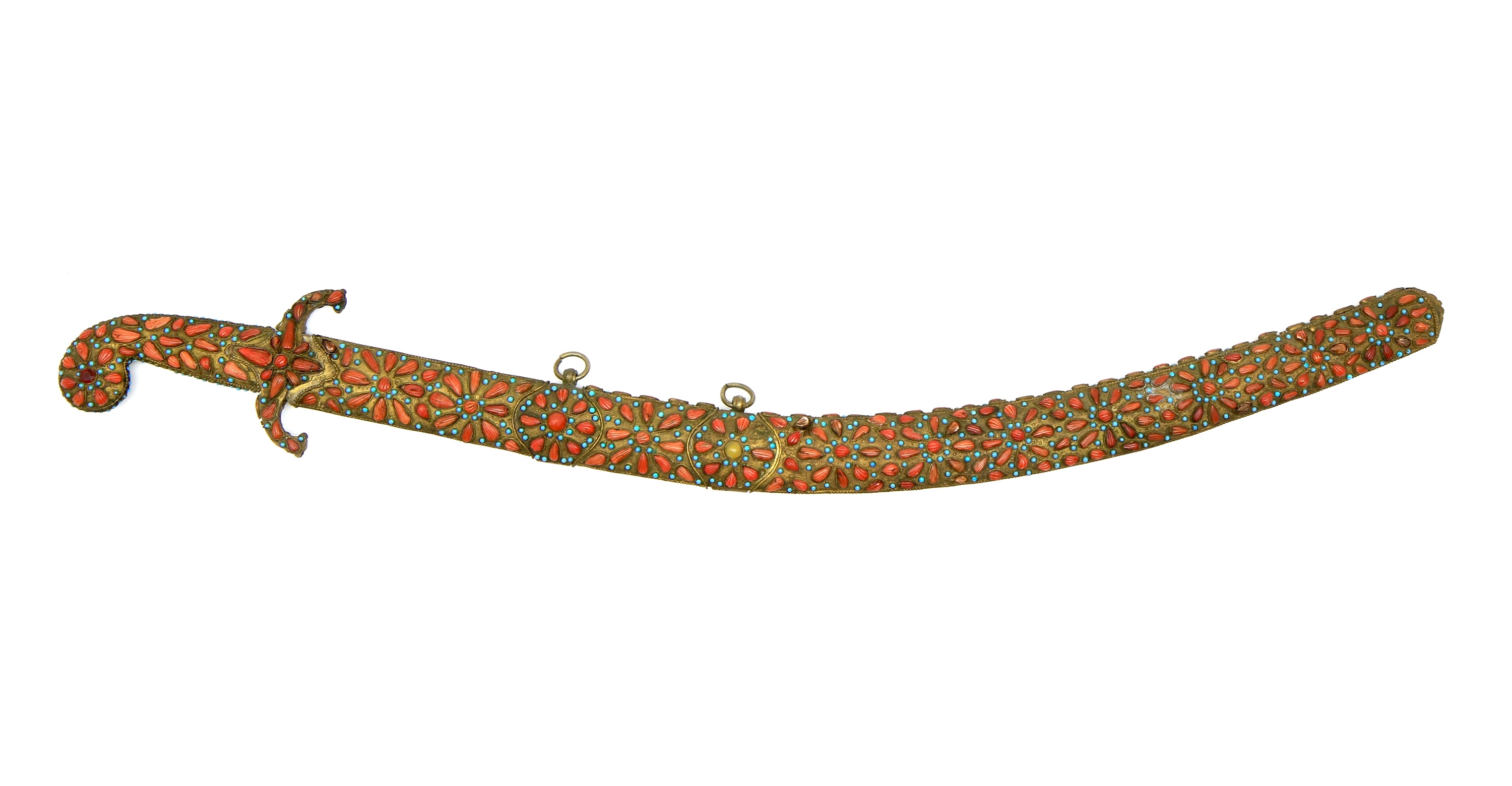 Over the years a number of Ottoman swords have turned up with gilt copper hilts and scabbards that were covered in corals and turquoises. Most of these seem to date from the 19th century, but are loosely based on much older examples with similar decoration consisting of a hilt and scabbard that are almost entirely studded with (semi-)precious stones.

In the early 17th century, Ottoman items were much in fashion among European elites and the Dresden Armory for example has an Ottoman studded dagger, mace, and sword that were presented to Elector Johann Georg I of Saxony. The dagger was presented by Emperor Matthias in 1617 and the mace and sword by Emperor Ferdinand II in 1620.1

Another notable sword with gem studded hilt and scabbard is attributed to the Prophet Muhammad. The blade is indeed from that period, but the mountings seem to be contemporaries of the three pieces in the Dresden armory.

Notes to introduction
1. Holger Schuckelt; The Turkish Chamber, Oriental Splendour in the Dresden Armory. Staatliche Kunstsammlungen Dresden. Deutscher Kunstverlag, 2010. Pages 64-67. The dagger can be found under accession number Y139, the sword under Y344 and the mace under Y345.

It has a pala type blade that is characterized by having a shorter, wider blade than the typical kilic that has a sudden bend in the middle of the blade, and a pronounced raised yelman or backedge. The spine is a T-shape, right up to the start of the yelman. Such blades emerged in the mid 18th century and remained in use throughout the 19th century.

The blade is forged folded in a multi-row twistcore steel, also known among collectors as "Turkish ribbon".

It bears several markings in gold overlay, over a crosshatched background, that I am still trying to work out.

On the right side is a rectangular cartouche saying:

This is obviously a symbolic date, as this blade type was not around until the 18th century.

There are some remains of older gold on the base of the spine, now worn, that seem of an earlier date than the other markings.

The sword comes with gilt copper a hilt and scabbard, covered with hundreds of corals and turquoises set in bezel. The corals are all drop-shaped and ribbed. The turquoises are small domes.

The hilt is of typical form, with a downward curved pommel and separate crossguard with forward sweeping quillons.

The scabbard has two scabbard bands that hold the suspension rings. The reverse of the scabbard is worked in repousse with geometric decoration and flowers, and in the lower section a building, probably a mosque.

Blade in pretty good condition, some minor blemishes at the forte, some wear and tear to the golden overlays. There is currently some play in the hilt and guard, I can easily fix this for a future buyer.

There is a magnificent example in the Metropolitan Museum, New York, accession number 32.75.300a, b. Originally from the Giovanni P. Morosini collection, the piece was presented to the museum in 1932 by his daughter Giulia.

Its description explains the use of corals and turquoises:

"The stones adorning the hilt and scabbard of the sword have talismanic significance. According to scholar Al-Biruni’s eleventh-century manuscript Kitab al- Jamahir (Book of Precious Stones), coral was believed to prevent misfortune and turquoise to avert the evil eye."

Another interesting example was auctioned by Anderson Galleries Inc, New York, in a 1926 sale.1 It is notable because blades were re-hilted often, and so dates on blades don't necessarily say much about the rest, but in this case it is the distinctive scabbard that is signed and dated, with a date corresponging to the year 1759 A.D.

Lot 79:
"Sabre of uncommon splendor. The blade, with reinforced back
and lateral channel, is encrusted with fine gold bearing the seal
of Sultan Suleiman, and name of the maker “Zalete Canouni”,
as well as the inscriptions : — “May God protect us” and “As God
wills.” The hilt and the scabbard, in bronze repousse, engraved
and finely filligreed, are encrusted with turquoise and coral of
fine workmanship. Composed of fourteen oblong turquoises
florally encised about 22 mm. of length, of 220 round turquoises
and 316 old corals in the form of tear-drops. These 550 stones
are held on the scabbard and the hilt by gilt silver wires. The
under side of the scabbard bears the date 1175 of the Mohamme-
dan era (1759 A. D.). Total length about 88 cm." 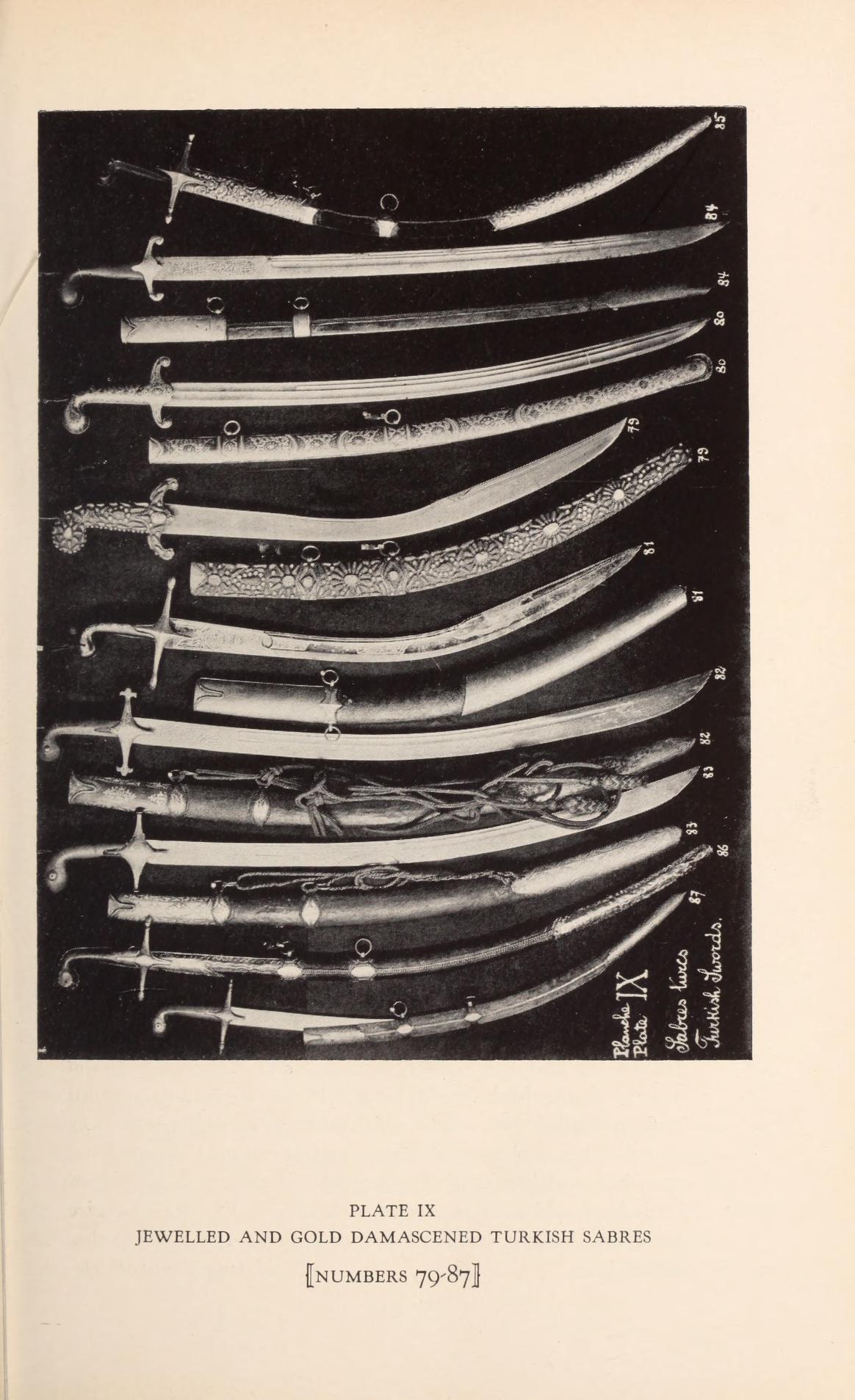 As illustrated in the catalog.

A number of comparables have been auctioned in recent years. What is notable is that they all have quite similar style and workmanship in the hilts and scabbards, but the blades are all different with some clearly having high-end, and sometimes older blades:

Judging by the style and workmanship, both blade and mounts can be dated to the 19th century with reasonable certainty.

Almost all are described as being probably from Trabzon, an arms producing city in Anatolia, on the coast of the Black Sea. Trabzon, also known historically as Trebizond, was known for its use of corals.

One such sword appears in a series of portraits that was taken at the the World's Columbian Exposition held in Chicago in 1893. 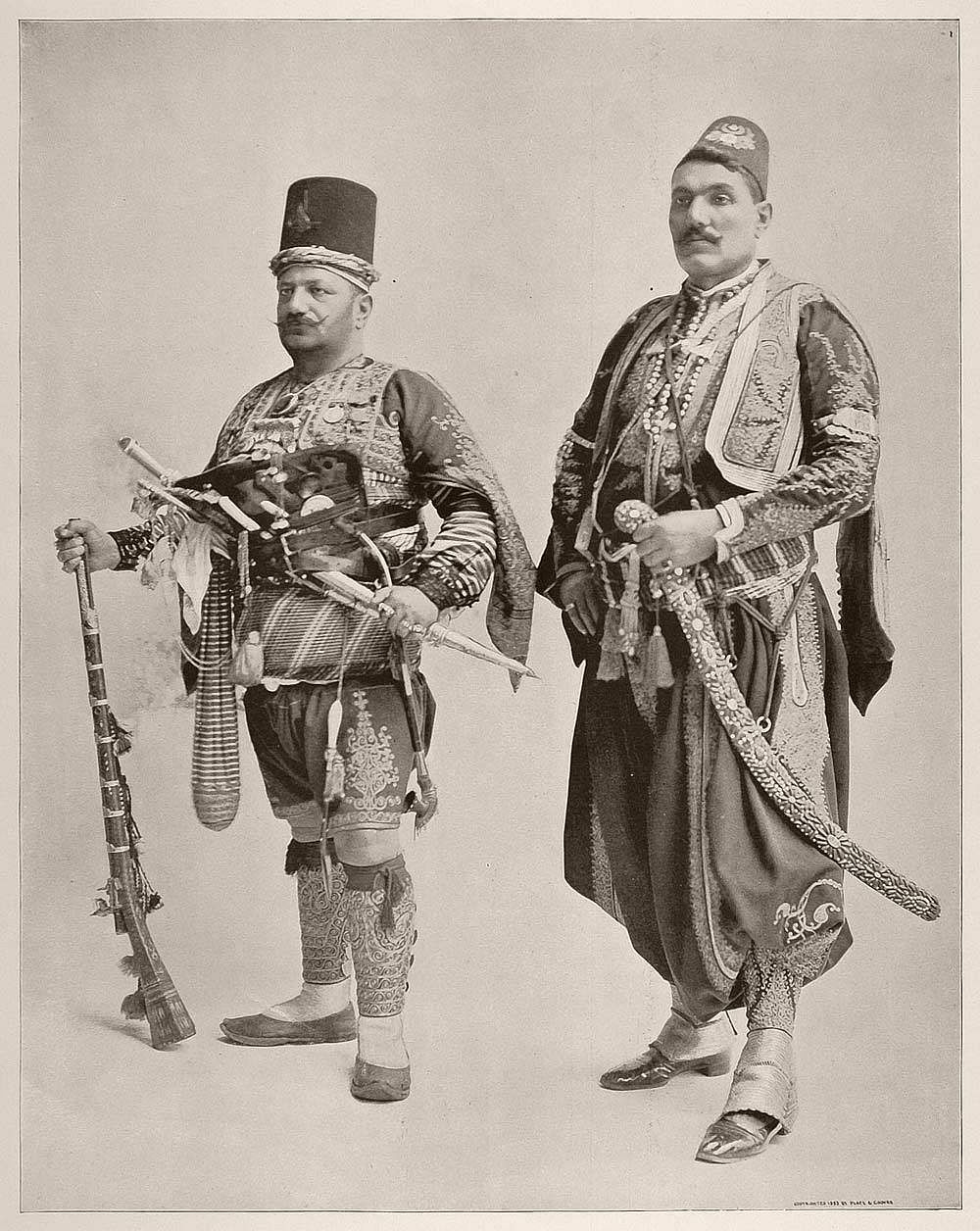 Greek and Janissary at the Chicago World Fair, 1893.

The descriptions goes as follows:

The figure on the right in the picture is one which would command attention anywhere. Standing more than six feet in height, he is clad in the uniform of that famous band of Turkish soldiers, the Janizaries, whose achievements have been the theme of historian and story-teller for ages.

In the "Prince of India," by Lew Wallace the most recent notable work of fact on in which this splendid arm of the Sultan's army figures, may be found a stirring description of their services at the siege of Constantinople, where, as ever, they were reserved by the Sultan to strike the finishing blow and make the actual capture of the city.

The other figure is that of a Greek who appears alone Portfolio No. 5.

Mr. Nichan, the Janizary, is an Armenian, born at Savaz, Armenia, about five hundred miles from Constantinople. He was one of the life guards of the late Sultan Abdul Aziz, who was said to have committed suicide.

At the great Fair Mr. Nichan was to be found in the Turkish
Bazaar where amid the splendid collection of antique armor, swords and other weapons, coats of mail and mementoes of Oriental splendor, his presence added greatly to the' interest of the scene.

The great carved sword which he wears, sheathed in a beautiful scabbard set with jewels and richly ornamented, was presented to him by the Sultan for meritorious services."2

Notes
1. Charles Buttin; Important Collection of Oriental Arms, European Arms made for the Oriental Market, from the Armories of Prince Zoubaloff of Tiflis, General Suleiman Pasha, Constantinople, Moslem Khan of Persia, Shaik Chamyl of Caucasus. Anderson Galleries Inc, New York. 1926. Said to be "from numerous private sources, sold by order of a foreign diplomat, the owner of the collection.".
2. Frederick Ward Putnam; Portrait Types Of The Midway Plaisance. 1894. Link to archive.org. 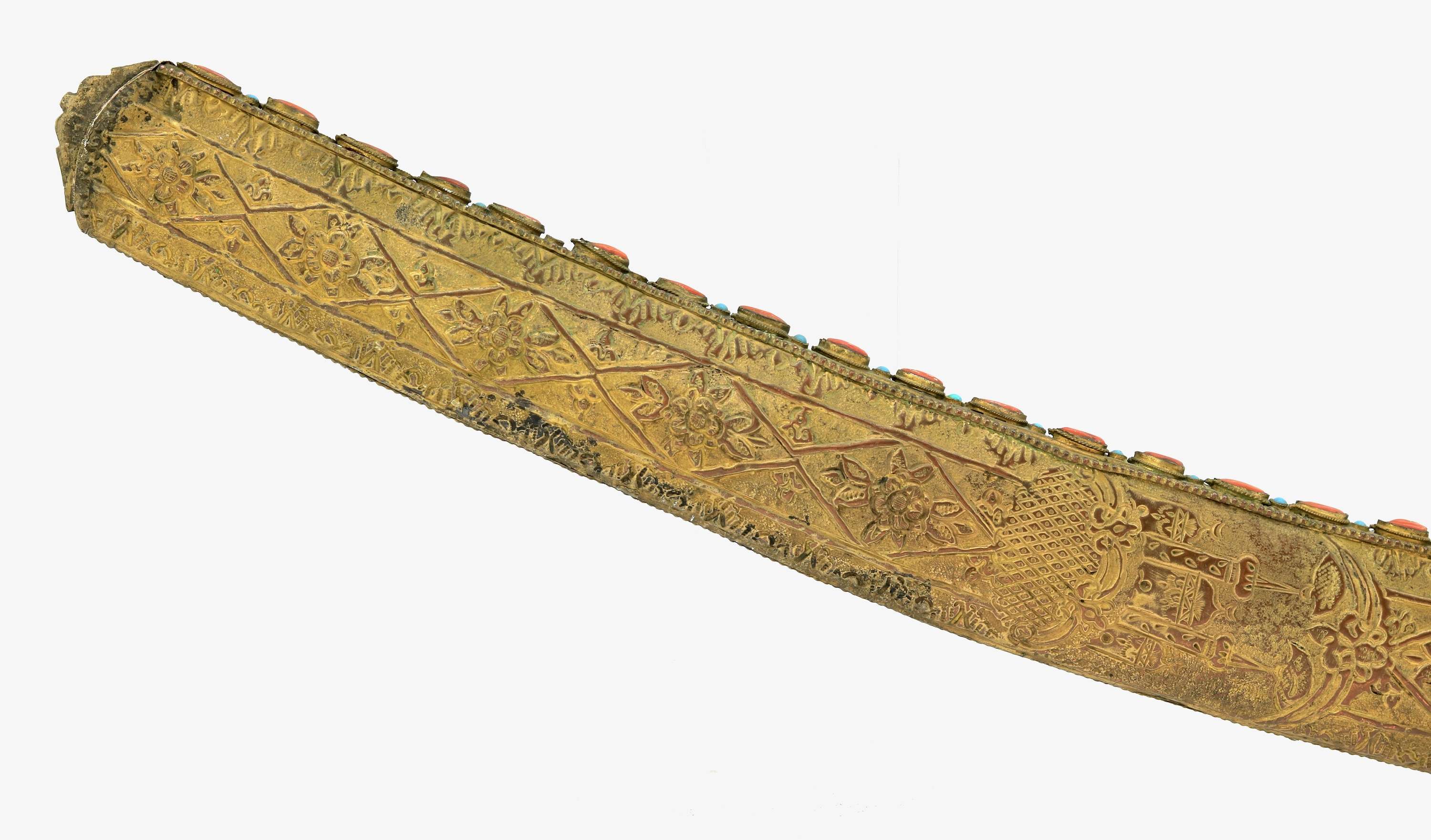 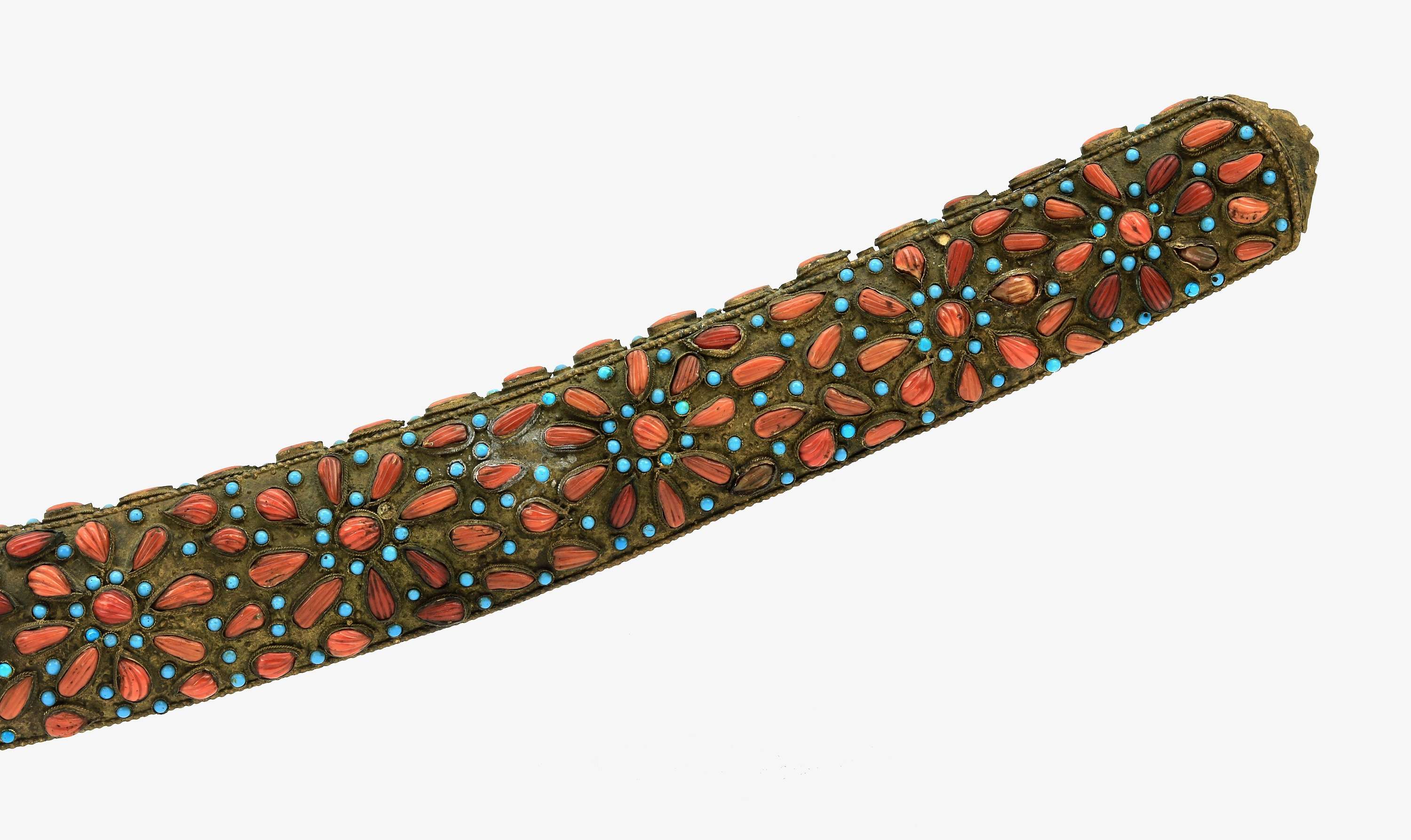 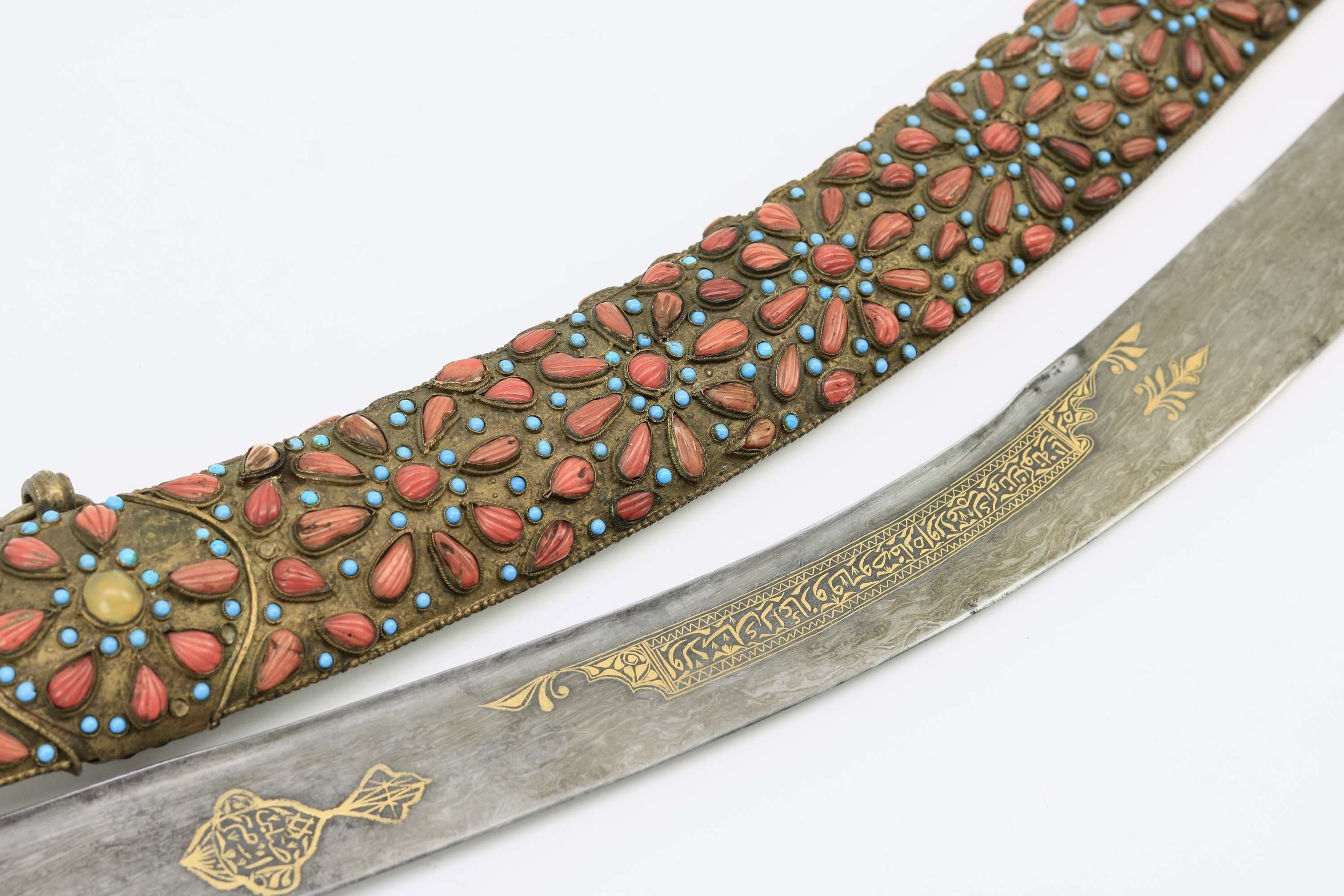 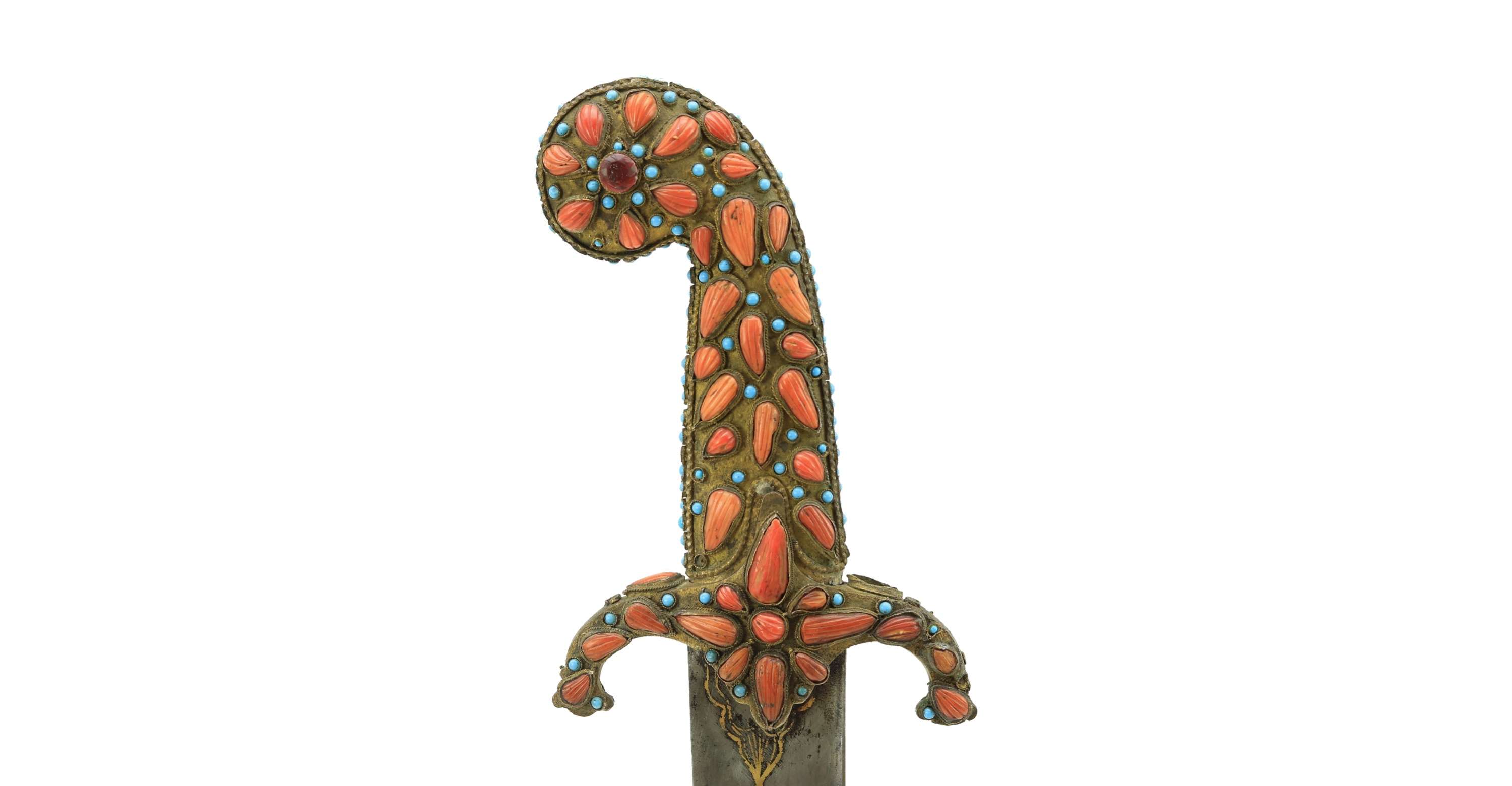