A substantial jiàn from the Ming dynasty. It is built around a rather stout blade that -typical for the Ming- has only a very gradual taper in thickness and relies for its balance mostly on a slight taper in width. The blade is forge folded with high carbon steel center plate supported by tougher lower carbon steel sides that exhibit a wood grain pattern.

Blade in pretty good condition for its age, I decided not to polish it but leave it "as is", as details of its construction can already be seen. Moderate, small pitting throughout. The blade is well-made with no forging flaws and gives s gentle hum when one taps the pommel. The sword has clearly been in action, there are some very minor edge nicks and a cut into the softer supporting layers on one side. At the base of the blade, on both sides, is engraved a stylized lingzhi mushroom.

The hilt consists of a four-lobed guard with a slightly raised rim that is chiseled with auspicious designs among flames. The decorative elements on each side include the wish-granting jewel, a stylized rúyì (如意) cloud, a stylized rhinoceros horn, and a fan. The thick iron ferrule is similarly decorated.

The large, flattened pommel is chiseled with a wish-granting jewel on either side flanked by a rhinoceros horn and a stylized conch shell, again amongst pointy, flaming elements that are typical for Ming work.

The chiseling is well done, with precision and standing out in fairly high relief over its background. The tang end sticks out a little further beyond the pommel and is peened over a brass sleeve.

The "Flaming Pearl of Wisdom" or "Wish-Granting Jewel" was a concept from Buddhism. The "pearl" is often held by Buddhist deities or chased by dragon on Chinese art.

The Rhinoceros horns symbolize wealth. They were also thought to be a remedy against poison.

The Conch Shell stands for the Buddha's teaching spreading in all directions like the sound of the conch trumpet, awakening his subjects from the deep slumber of ignorance.

The fan is perhaps the most significant decorative element found on the sword. It symbolizes Zhongli Quan (鍾離權), the patron of military men and leader of the Daoist Eight Immortals. He was a mythical figure that was said to have been a general around the Han dynasty. According to legend, he was the swordsmanship teacher of Lü Dongbin, a Tang poet and scholar who was to become one of the Daoist immortals and patron of scholars. 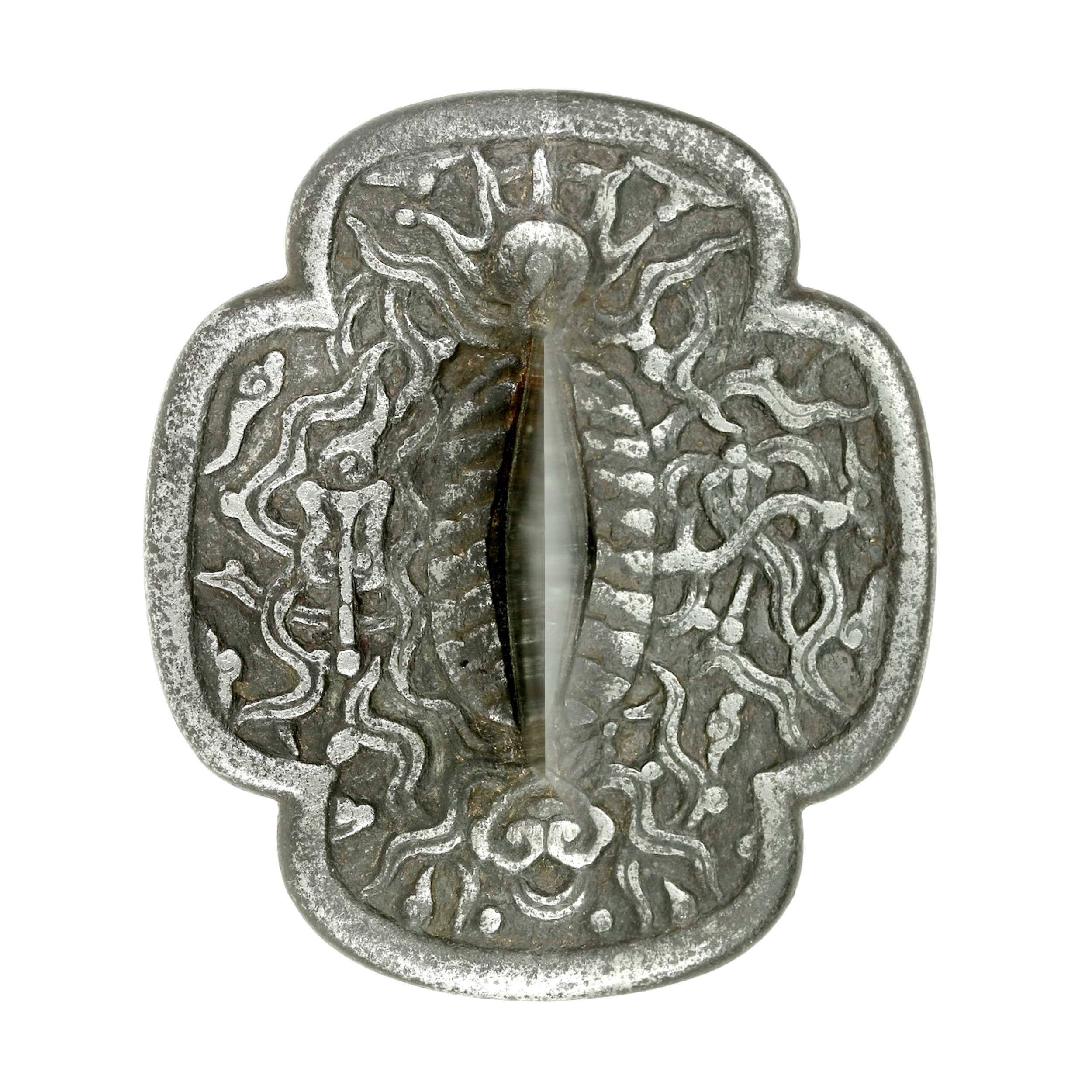 View of the top of the guard. Image compiled from several photos.

Symbols referring to Daoist immortals often appear in groups on Chinese objects. In this case, specifically the fan is depicted, suggesting whoever owned the sword felt a special connection to Zhongli Quan.

Good condition overall for its age. The usual wear, a dent in one side of the pommel and some filler applied on the other side. Hilt is tight.

A rare and rather nice example of a jian that dates from the 16th to early 17th century. Very few antique arms from China survive from the period, and those that do are often not of this quality. Even in Chinese art in general, this type of chiseled iron is extremely rare as most iron and steel artifacts perished in the 20th century.

Despite the nice hilt it is a heavy and fully functional weapon and was put to use as such as can be seen from some of the battle scars it still carries.

Considering the theme of its decoration and the execution of the piece, the sword was probably once owned by a fighting man of some means. Perhaps a higher-ranked military man who saw Zhongli Quan as his patron saint.