From a European private collection.

A nice example of a khukurī in a carved wooden scabbard. According to Powell, such scabbard were mainly made by the Newar people of Kathmandu Valley.1 One of the Newar castes are the shilpakar who were the main wood carvers.

The knife itself is of archaic style, harking back to the shape of early sirupātē khukurī of the first half of the 19th century. Although narrow in width, it is rather thick. It has two narrow grooves running along the spine up to the shoulder of the blade and a very deep, almost fully circular notch or kauro (कौड़ो).

The knife has a full-tang construction, with the tang running the entire width of the grip. Two pieces of black buffalo horn are riveted to each side by means of two rivets. Each slab is elegantly lined with brass, and the rivets have brass washers. A decorative band is carved all around the hilt, even into the brass and steel of the tang. The part on the horn grip itself now worn through many years of usage.

The carved scabbard is of a so-called "box" type. It is carved out of two large pieces of dark hardwood, glued together. Both sides of the scabbard are elaborately carved to mimic tooled leather. The front has a crossed patern lined by a repetative stylized floral bands. The makers even carved out the strap and two buttons traditionally attached to a khukurī scabbard.

On the back, the pockets for karda, cakmak and tinder pouch are finely articulated, integrated into the scabbard. Although there is only really space for the karda and cakmak. Only the cakmak remains. The scabbard further has an iron chape.

Although the overall blade shape is of a rather early style, the deep kauro, the flaring pommel and the rivets betray a later date. Riveted hilts like this became standard military issue for the Gurkhas with the coming of the MK2 military khukurī in 1915. Our piece could be an early prototype of such a construction, but more likely is that it dates from around the early years after the MK2 introduction and was inspired by it.

Some staining to the khukurī blade, and some minor edge damage near the tip. Some chips off the pommel. Scabbard in good condition. I repaired a large crack in one side with wood filler and palisander colored lacquer to help it blend in. See photos.

A rather unusual piece, blending earlier khukurī design with the latest military innovation. Packed in a wooden scabbard that is carved to closely mimick leather. All with strong signs of years of use. This was not just a quicky curio, but someone's trusted companion for years. 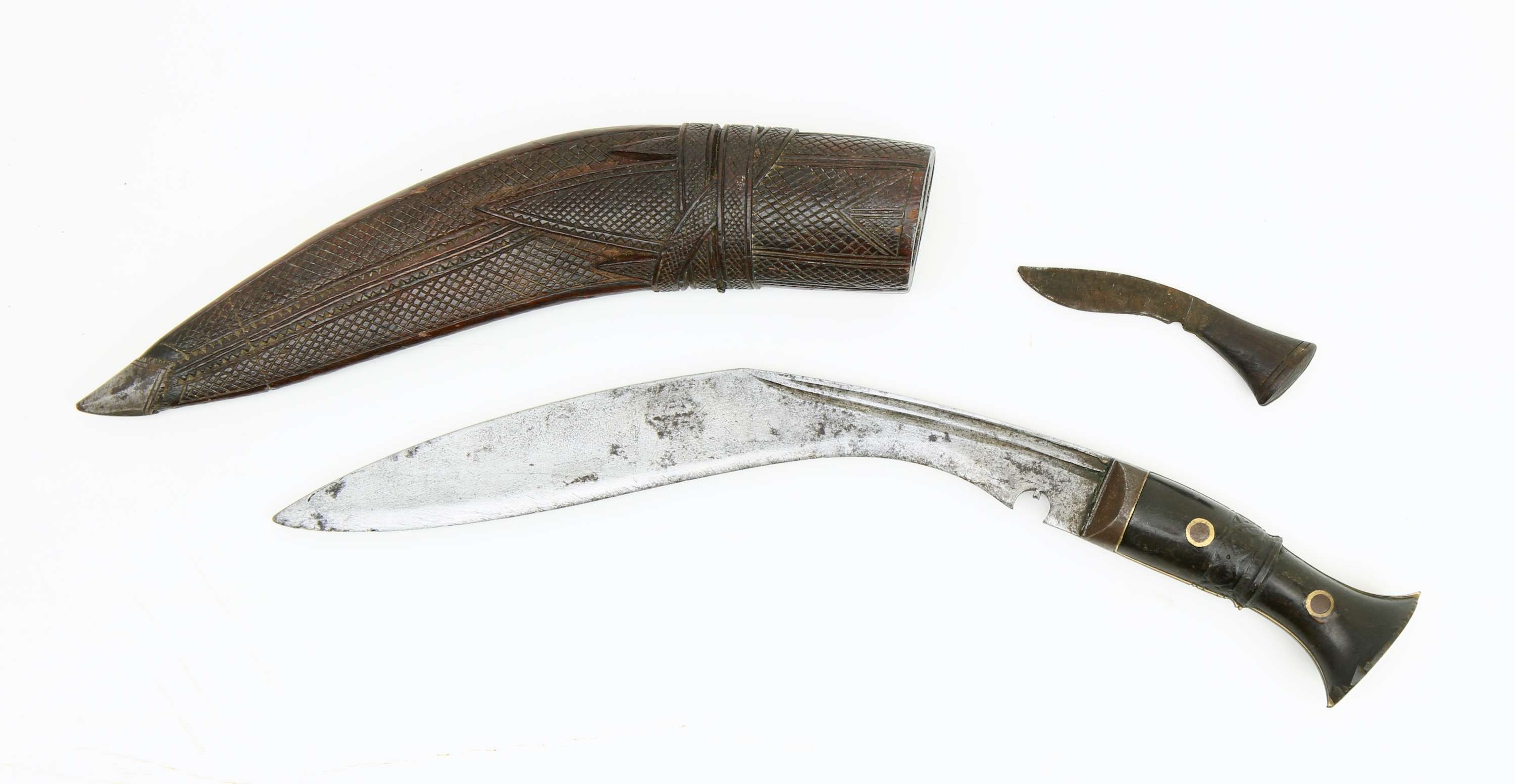