A fine talwar with markings attributing it to the princely state of Ratlam, Madhya Pradesh, India.

The blade with a fairly deep curve and raised backedge, with flat sides and a secondary bevel that makes the edge. It is entirely pattern welded, with a multitude of small circles known as "bird's eye" among collectors. The effect is very subtle in its current condition and was probably etched to somewhat more prominence in the past. A portion of the base of the spine has some gold overlay that mimics the shape of the pattern welding.

While the left side remains undecorated, the right side of the blade is elaborately chiseled in a style that is strongly inspired by earlier Mamluk sabers. This makes it part of a small and rare group of Indian talwar with such a blade decor.

The chiseled decor is accompanied by various inscriptions that turned out rather hard to decipher. The cartouche near the hilt appears to be a maker's mark:

Assuming the date is according to the Hindu Vikram Samvat calendar, this translates to 1744 or 1743 A.D.

The next inscription, on the square raised platform amidst the sunken panel may be a reference to panjtan, the five holy names. They are the Prophet Muhammad, Hazrat Ali, Hazrat Fatimah, Hasan and Husain.

The last marking, along the spine, remains hard to translate.

The hilt is of a style close to the Jodhpur style, which makes sense because the state of Ratlam was founded by the grandson of a maharajah of Jodhpur. It is entirely covered with a pattern of stylized flowers in very thick gold overlay, so thick that it appears in relief.

The pommel plate is decorated with flowers and parakeets on the hilt side, and more stylized flowers on the bottom. Around the base of the hilt is Devanagari script in a typical Rajput style. I cannot read it myself, but it is suggested that it may say:

It seems to refer to a prince under the Maharaja of Ratlam at the time. The other side carries a date, chetra 3, of Vikram Samvat 1815 which translates to Tuesday, 13 March 1759 A.D.

The translations given are preliminary and deserve more closer study.

It comes with a wooden scabbard that is covered with smooth black leather. Scabbard end- and mouthpiece are of an unknown white metal with some sort of a gold wash that tarnished to a brass-like color. They are decorated with typical northern Indian decorative motifs including floral scrollwork. Both fittings have a suspension ring, unusual for a talwar, which suggests it was perhaps carried slung. There is a tassel attached to the upper ring, made of silk and metallic thread.

The tassel may have served as a hilt retainer, one end going over one of the hilt quillons to stop the sword from moving out.

Very good condition throughout. Blade and hilt in near-mint condition. Some very minor pitting to the blade. Thick gold on the hilt almost 100% retained. Scabbard in very good condition also, some minor damage and scuffing on the leather.

A beautiful Indian talwar with fine pattern welded blade with interesting Mamluk style blade decor. The piece is especially important for students of Indian arms and armor because both the blade and blade are signed and dated, the blade being made around 1744 and the hilt some 15 years later in 1759. Because of the added context, they serve as an excellent benchmark to judge other work by. 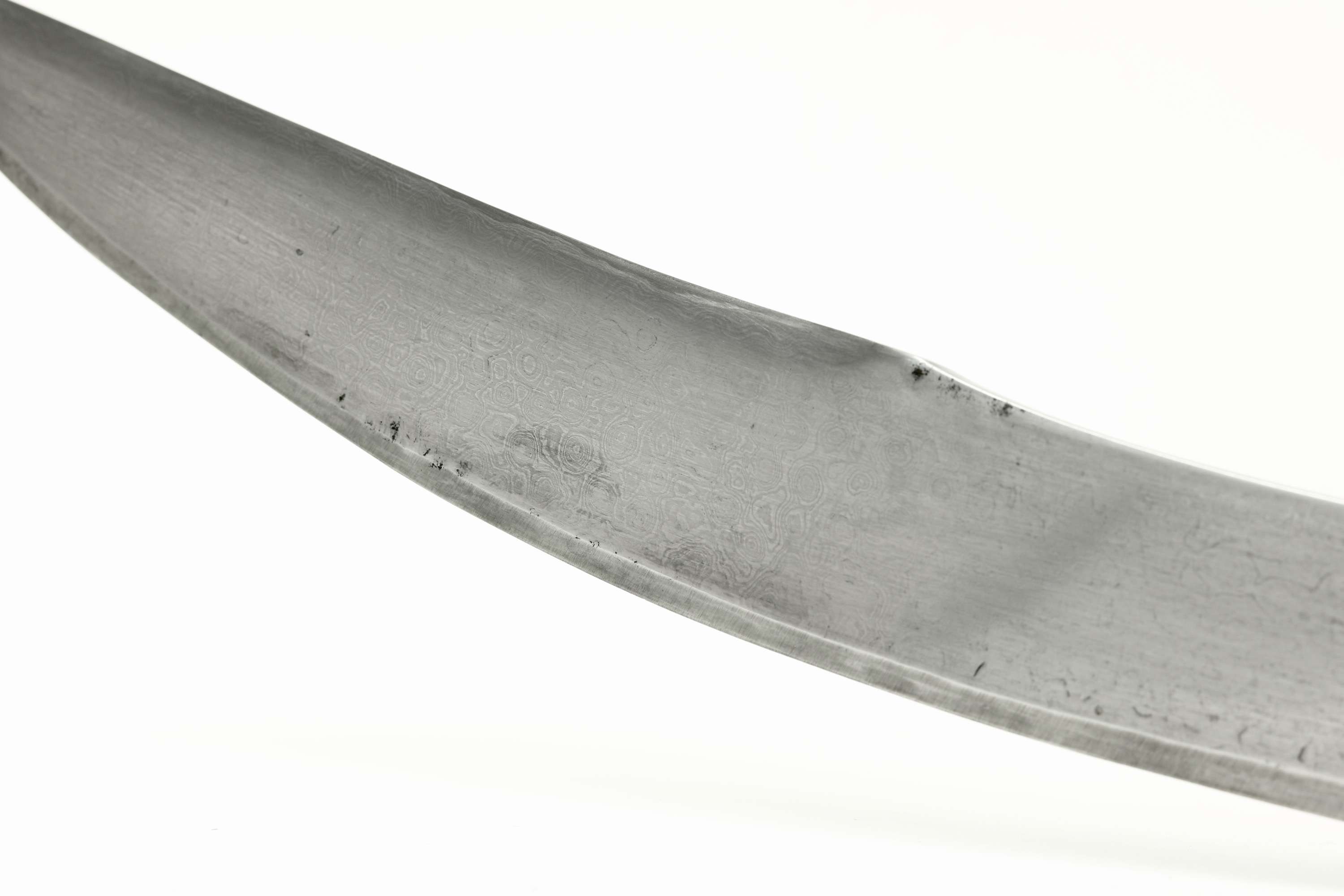 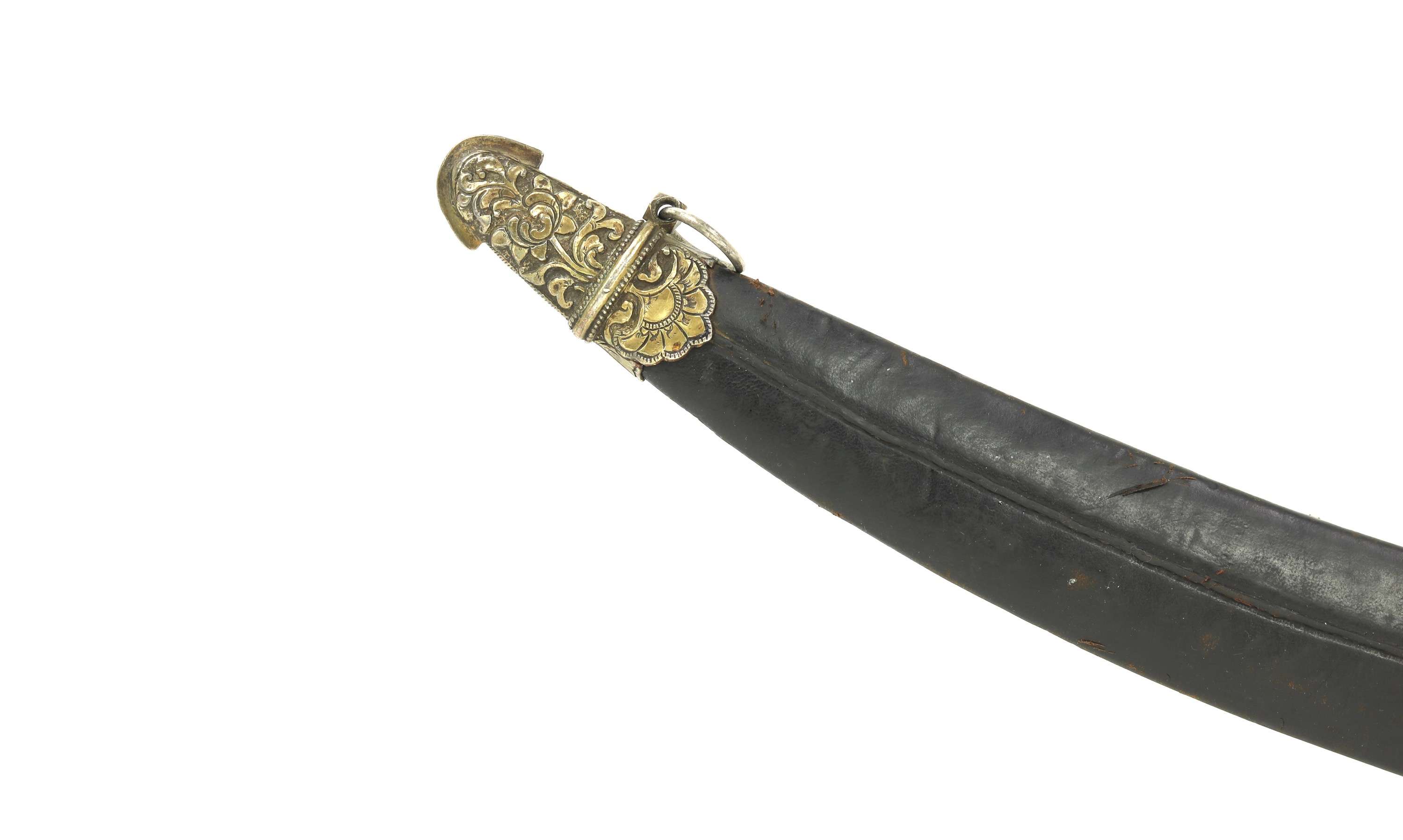 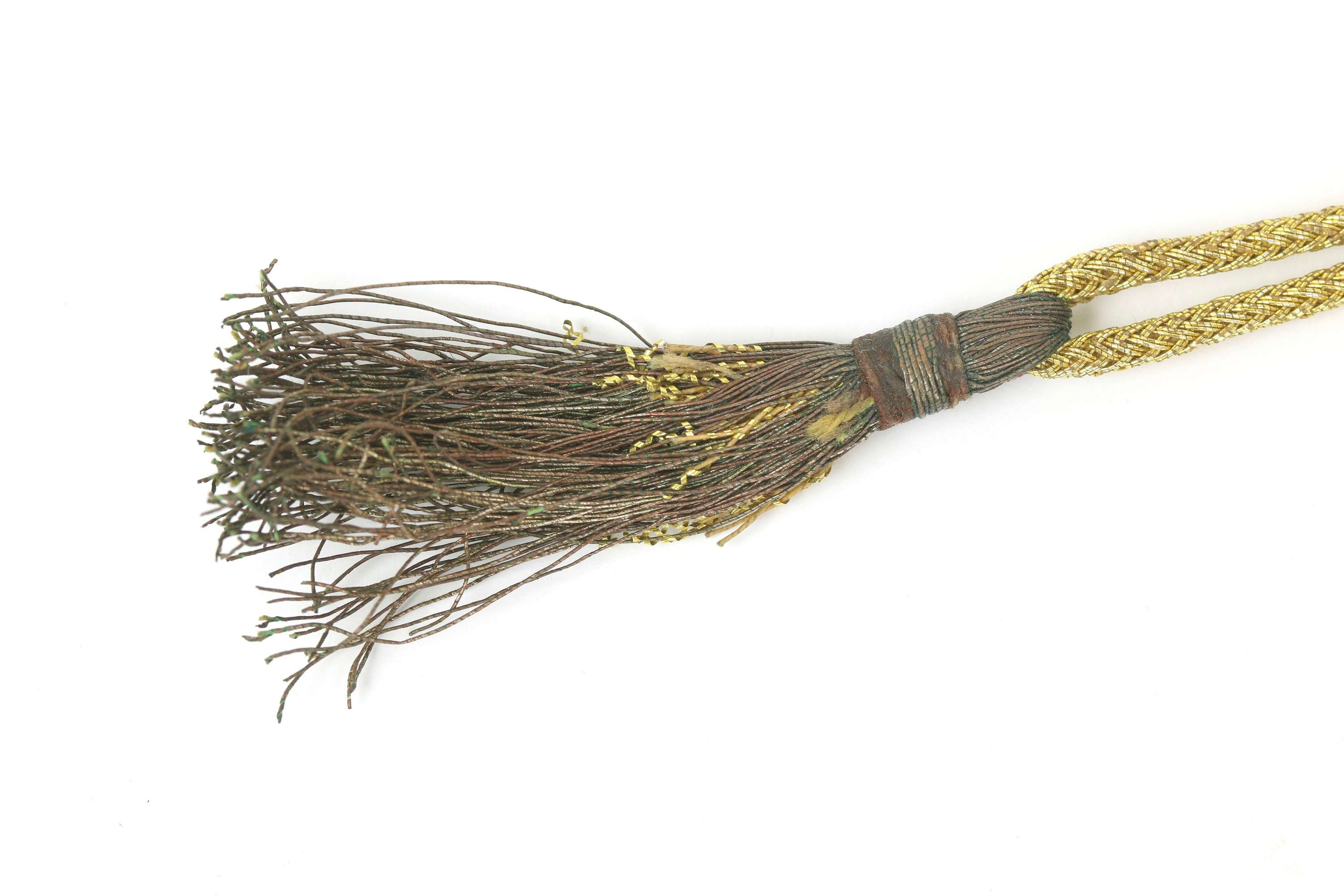