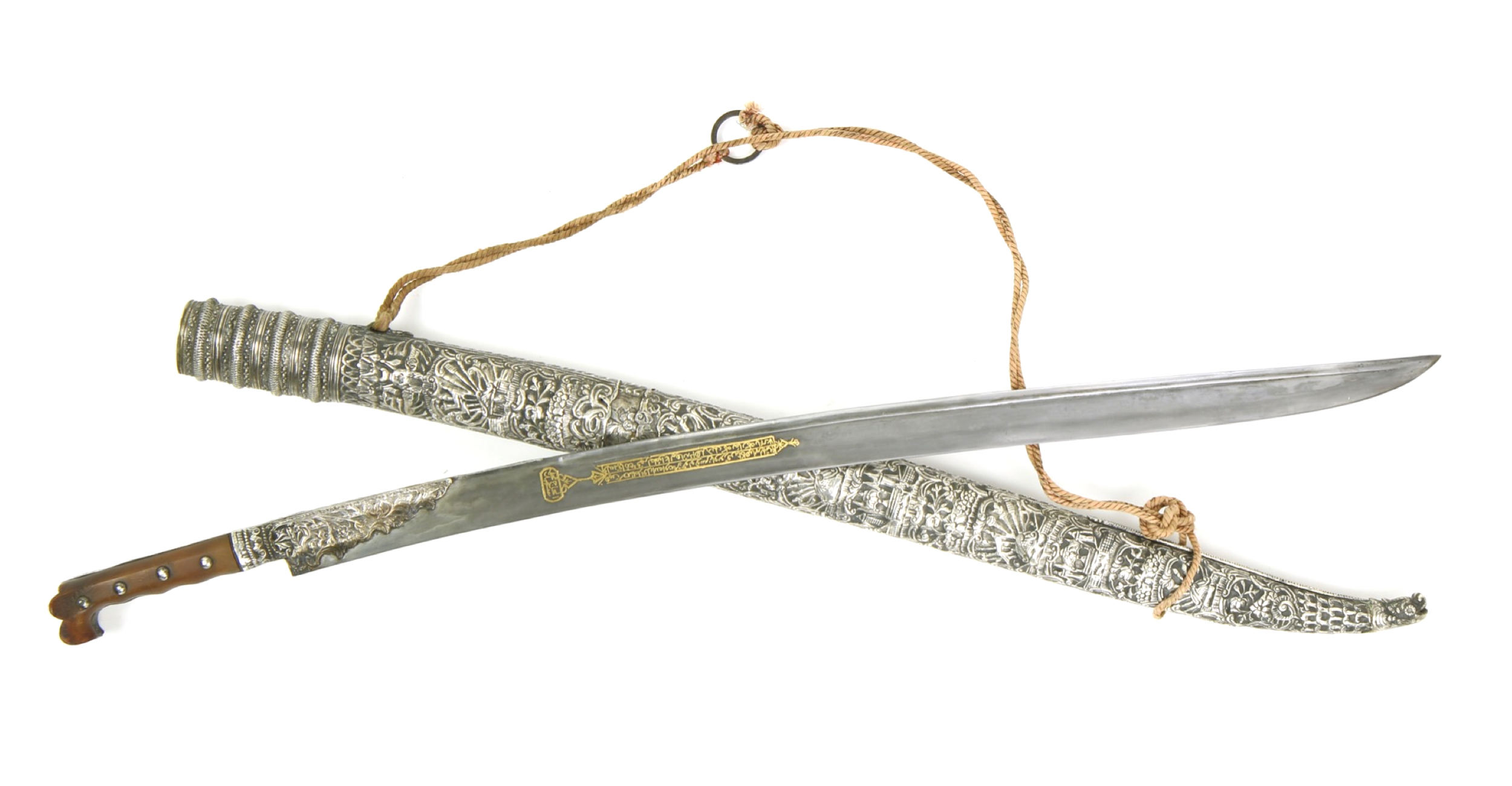 Just ahead of collar 6.5 mm

The yatağan is a type of sword with a recurved edge, reminiscent of the Greek kopis from which it probably derives.

It was very popular throughout the Ottoman empire, with distint regional variations in the various areas under strong Ottoman influence such as Algeria, the Balkans and the Caucasus. The yatağan was mainly associated with infantry, like the janissaries.

An outstanding yatağan from Ottoman Algeria. The slender, recurved blade is subtly layered with some more prominent forging lines seen near hilt and tip. It has a dorsal groove on each side with a narrow engraved line under it, reaching all the way to the tip.

The blade has markings on gold wire overlay on both sides. On the left is the star of David with an inscription, on the right two cartouches with script.

The owner's name was "Al-Haj Mohammed". His last name is hard to read, it could be Sameer, Sayeed or Sameed. Al Haj is a respectable title that means he completed a pilgrimage to Mecca, which was an expensive ordeal at the time and something that raised one's status in society considerably.

The rest of the markings remain untranslated, they are probably religious in nature.

The characteristic hilt consists of two halves of amber-colored cattle horn, riveted to the tang with four silver plated nails. The tang is lined with chased silver all around, and two silver ornamental sleeves extend onto the first 8 cm of the blade.

The wooden scabbard is completely clad in thick silver sheet, worked in repousse with the typical heraldic imagery seen on Ottoman scabbards of this kind. At the end is a neck of scales leading up to a fish-like head. The scabbard mouthpiece is decorated with four bands of fine braided silver.

It still comes with a carrying strap made of silk, reinforced with metal wire on the inside and with an iron ring in the middle.

Artzi Yarom of Oriental Arms had a comparable example with French 1830's markings. This is the year that the French captured Algiers, Algeria's capital. The marking probably commemorates the capture of this sword during that event.

Another example with very similar silverwork on the sleeve and a similar, narrow groove in the blade was presented by Per Erik Sköldebrand to Charles XIII of Sweden. Sköldebrand was the consular secretary at Algiers between 1791-1798.1

This puts the manufacture of such pieces in Algiers back to at least the late 18th century.

An impressive Algerian yatağan of a quality and condition that exceeds most of its contemporaries. The owner completed the pilgrim's journey to Mecca in the late 18th or early 19th century.

Notes
1. Robert Elgood; The arms of Greece and her Balkan neighbors in the Ottoman period, Thames & Hudson Ltd., 2009. Page 47.