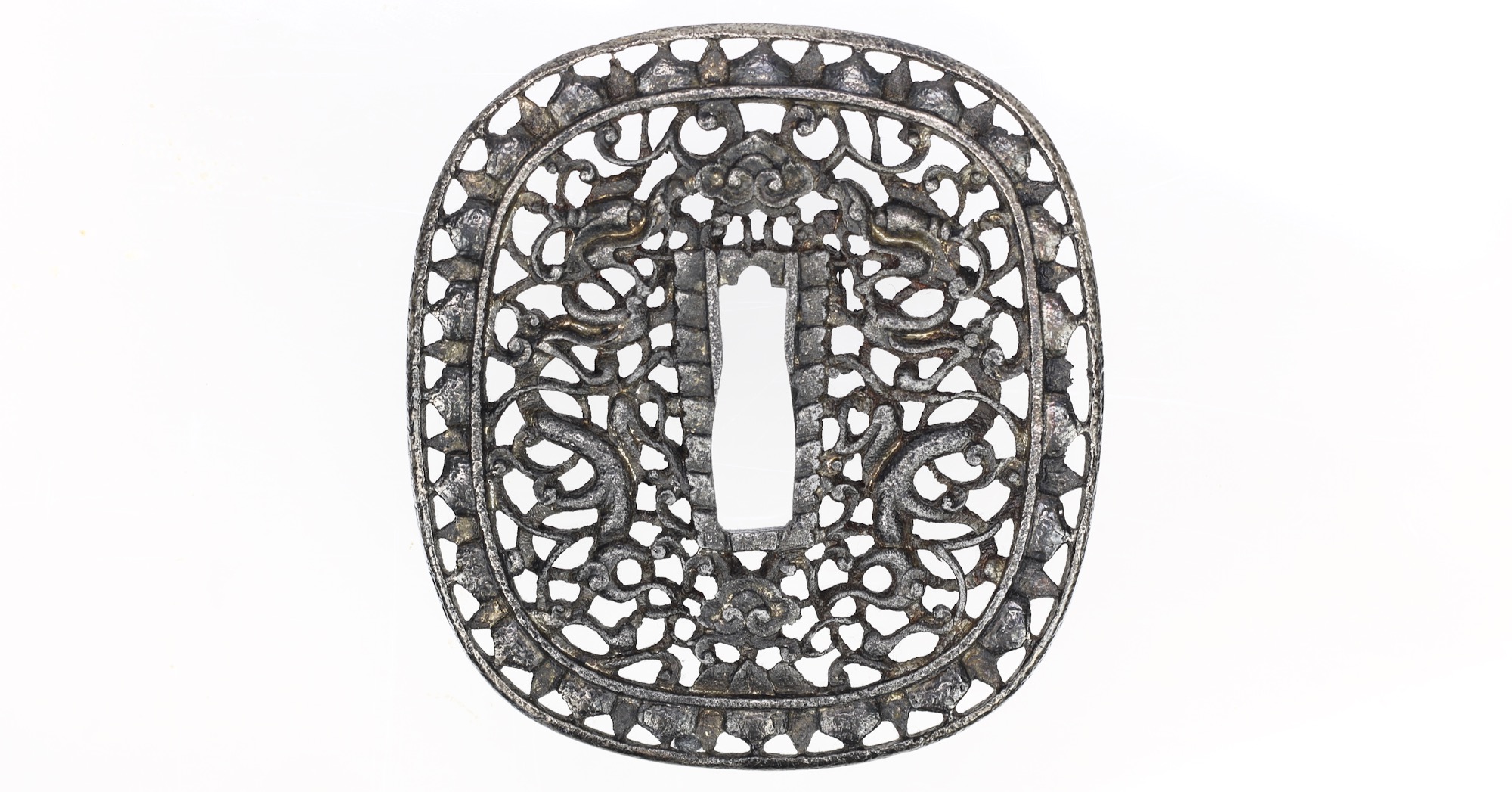 Iron, silver, and remains of gilding.

Converted to Japanese use. Has been mounted.

The archetypical Chinese sword guard of the 17th century. The style, in mature form, is first seen among the Manchu aristocracy before completion of the conquest of China. They are very Tibetan in style, and so they are often referred to as "Sino-Tibetan". The form is purely Chinese though, the Tibetans never used sabers that required this type of guard.

A Chinese imperial saber with a full set of openwork mounts, from the Max Dreger collection. Auctioned in 1925.
Other examples are in the Hermitage, St. Petersburg, Palace Museum, Beijing, and various private collections. I have two theories on the origin of the style:

1. The early Manchus and Mongols had strong religious ties with the Tibetans, with many of them converted to Tibetan Buddhism. Records show that during the forging of alliances between Manchus and Mongols in the 17th century quantities of "carved saddles" were given as tribute from the Mongols to the Manchus. These were most likely the highly prized Tibetan saddles with pierced ironwork from Tibet. The Manchus may then have wanted saber mounts to complement the saddle plates and had them made either in China or Tibet.

2. Nurhaci, posthumously proclaimed "first emperor of the Qing dynasty" used to be in service of the Ming before he rebelled. We know his armor was supplied by the Ming. Beijing had ties with Tibetan rulers and we know its workshops Tibetan style pierced ironwork from as early as the Yongle reign. Some of this was for local consumption, other pieces were meant to present as tribute to the Tibetans. It is possible that these sword mounts were first developed in Beijing, and obtained by the early Manchus through tribute and trade. A saddle with pierced iron and richly gilt plates, thought to have been made in the Beijing workshops for a Tibetan dignitary. It has a Tibetan inscription on the saddle tree suggesting it was indeed used in Tibet. Metropolitan Museum, accession number 1998.316.

Whichever route the design took, we know for certain that they were inspired on Tibetan saddle plates, as they have a much longer history than the saber with disc guard has. Such complex pierced mounts were continuously used by Manchu aristocracy up until the height of the Qing, around the mid 18th century. Very few Chinese sword guards of this fine workmanship survived because the tendrils are incredibly fine, and often rusted away.

Apparently these guards made it to Japan in some quantity, where they must have marvelled over the complex geometry of these pieces. The work is elaborately pierced and deeply undercut, sometimes resulting in as many as three layers of tendrils passing under and over each other. Many Japanese attempts to copy them exist, although Japanese workmanship can be incredibly good, none of the Japanese-made copies exhibit undercutting quite as complex as on the Chinese originals.

Sword guards like these gave rise to an entire sub-genre among so-called nanban tsuba and Asian export sword guards. In the 19th century, the type was known in Japan as Kwanto-gata or "Kanton style" / "Canton style". Despite the name there is no evidence that they were were made in Guangzhou or even South China, the work seems to have been primarily made in the imperial workshops in Beijing. Kwanto-gata probably sprang from Nagasaki dockside slang, referring to the Chinese merchants who imported them who mostly sailed from the port of Canton (Guangzhou). A classic example of a 17th century Chinese loukong panhushou (鏤空盼護手) or "openwork disc type hand guard" made for a Chinese waist-worn saber, the standard side-arm of the Qing. It is someone finer than most of its kin, with some tendrils being thinner than a millimeter in diameter. The washer seat is rectangular, and recessed on the facing side to accommodate a rectangular ferrule, as was common on Chinese arms in the 17th and most of the 18th century. The reverse side is carved with diagonal ribs, this would be the side there the blade protruded from the guard. Chinese did not use washers here like the Japanese did, so this section was often carved or otherwise decorated on Chinese swords.

The decor consists of two dragons that are reaching for what seems to be a lingzhi fungus, associated with long life. They are often deliberately styled as clouds. There is another such motif on the bottom. The shape and style of this motif is very close to Ming renditions of the design, placing the likely time of manufacture of this guard firmly in the 17th century.

The outer double rim is decorated with a lotus petal border, a design that was likely inspired by Tibetan religious statues where the deity is often seated on a lotus. This plant is significant in Buddhist thought because the seed germinates in the murky depths of a pond, and the plant slowly makes its way towards the light. Once reaching the surface, a perfect white flower emerges. The lotus in that context thus represents the path to enlightenment. This motif was later simplified to a beaded border but guards like these effectively show where the design originally came from.

Upon close examination the guard seems to have much of its original silver remaining, consisting of silver sheet attached to a crosshatched background. In some of the crevices, some remains of gold can be found. It was probably once completely covered with silver, and then selected parts were fire gilt.

This particular guard was one of those who made it to Japan somewhere during its lifetime. The tang aperture was re-cut to fit a more wedge-shaped Japanese tang, and furthermore it was converted to be worn edge-up while on a Chinese saber it wold be worn edge-down.

A very fine example of a rare Chinese sword guard, representing some of the most complex metalwork made in China at the time. The guard is also significant because it is the legitimate ancestor of an entire genre of Japanese nanban tsuba, the so-called "Canton form", and for many Asian export sword guards.