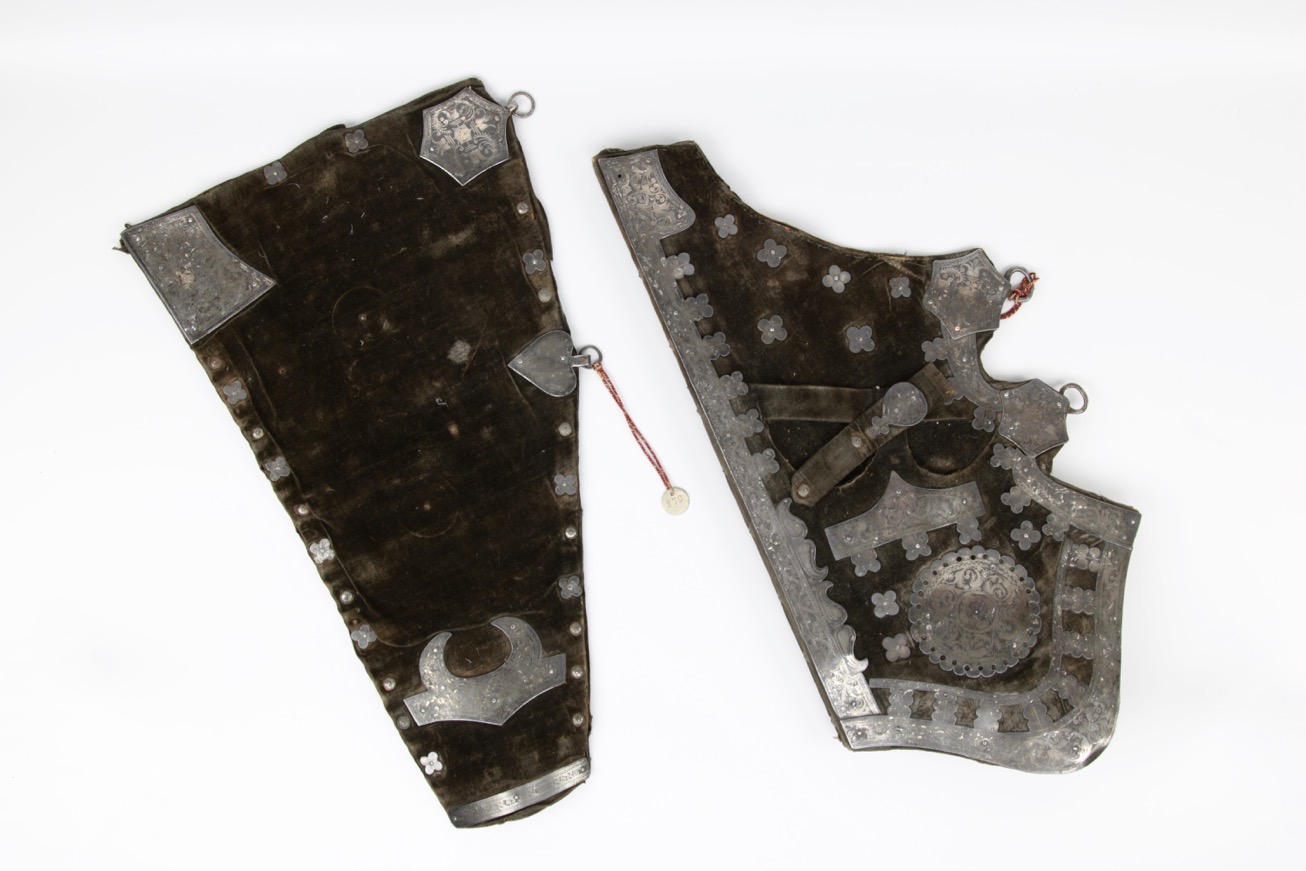 A very rare set of bowcase and quiver that can be attributed to the Western Buryats, living near the shores of Lake Baikal.

The bowcase is of leather, covered on the front with black velvet that is riveted on with hand-forged rivets with ornamental heads showing on the front side. It has two suspension rings on the right side that are attached to large iron plates, the upper of hexagon shape with hollowed side, the lower is heart-shaped, both damascened with silver. There is another plate on the upper left, one in the bottom and a metal band running at the very bottom of the bow case, all of iron damascened in silver. In the middle of the bow-case are two rivet holes with impressions of circular form, suggesting there were once two additional circular plates to adorn it.

The large quiver is constructed around a boat-shaped wooden base on the bottom with an upright wooden piece on the left side, to which leather is nailed on both sides. (This is the basic construction method for so-called "open quivers" from most of Asia and the Islamic world, including the Ottoman Empire, Persia, China, Tibet and Korea.) On the front the quiver is covered with black velvet, in two layers, the bottom half of the quiver having a double layer creating a space in which additional arrows can be tucked.

There are crossing straps right above the W-shaped opening of that layer, in similar fashion as seen on some Mongolian, Tibetan and Chinese quivers. The quiver, too, has two suspension rings attached to large ornamental iron plates, of hexagonal shape, damascened in silver. The entire outline of the quiver is covered with iron plates, richly silver damascened. The front of the quiver is further adorned with various ornamental plates, all damascened in silver.

To both bowcase and quiver are attached two metal tags, probably old collection inventory numbers: 270 for the bowcase, 271 for the quiver.

Such sets are so rare that none of the major archery collections, including the Ingo Simon collection, the Stephen Selby collection, the Karl Zeilinger Collection and the Charles E. Grayson collection, and the collection of the archery Museum of Crepy-en-Valois contain one of these sets.1 As such, comparable examples and documentation about them is very scarce.

The earliest attribution of such quivers can be found on a drawing made by Emelyan M. Korneyev, published 1812.2 Further depictions are found in some photographs: A Buryat mongol wearing a bowcase of very similar profile,
and with the round center ornaments missing on ours.
Piotr Shimkevich, 1895. The person on the left seems to wear a quiver very similar to ours.
The one on the right wears a bowcase that is a more standard pattern Qing type.

A very rare set of Buryat bowcase and quiver, with iron mounts all damascened in silver. It is so rare that none of the major archery collections of the 20th century have been able to obtain a set.

NOTES
1. The Ingo Simon collection is now part of the Manchester Archery Collection, the Stephen Selby collection has been displayed at the Hong Kong museum of coastal defense but is currently in storage. The Karl Zeilinger Collection was auctioned by Hermann Historica last year and the Charles E. Grayson is currently held in the Museum of Anthropology, Missouri. Per my knowledge, none of these collections, nor any of the other major collections of ethnographic arms in the United States or Europe have an example of such a set.