Wǔkē gōng (武科弓) literally "Martial test bow", was a type of heavy bow that was used in the Qing dynasty to build up and to test the archer's strength. In order to pass the military exam, for example, soldiers were required to pull the 160-pound bow.1 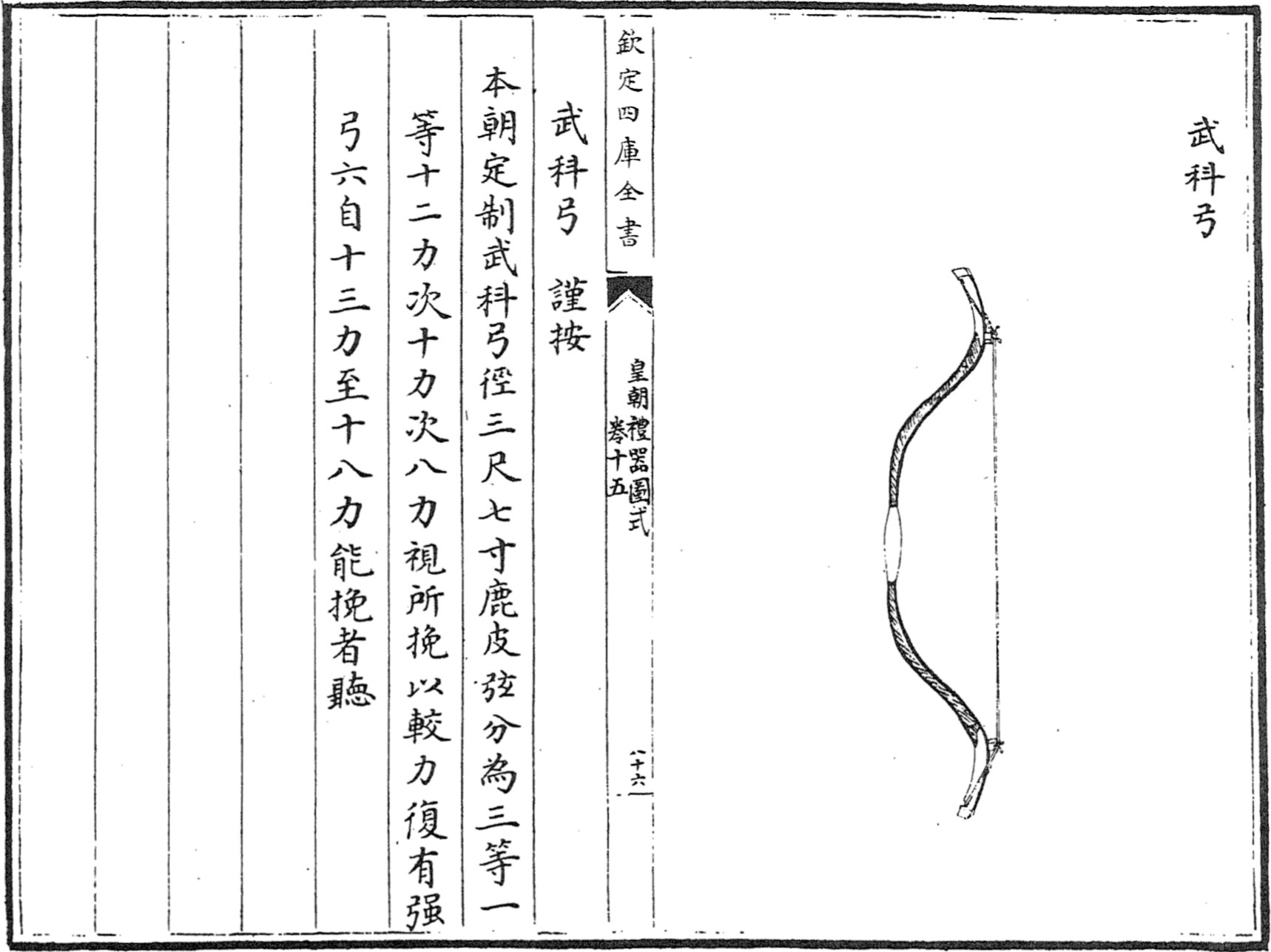 To get an idea of how common these weights were in use, we can catch a glimpse of the military examinations from a published page of results of examination results in Jiangnan, 1882. Of the 8 listed contestants, 3 pulled the 173-pound bow and 5 pulled the 160-pound bow. 3 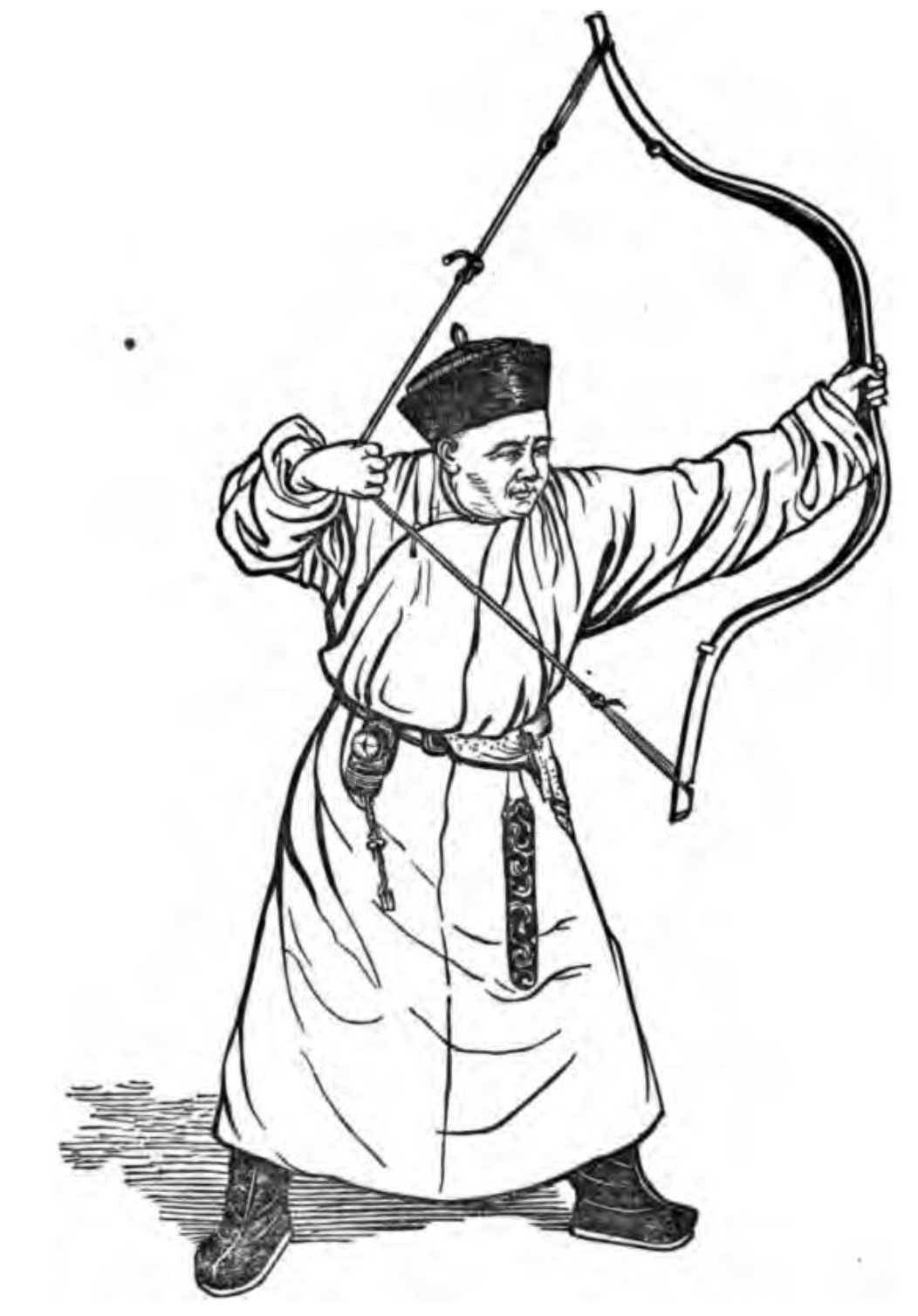 Even during the Boxer Uprising of 1900, well into the age of firearms, the Qing soldiers upheld heavy bow archery:

“The Chinese bows are large and powerful... Bows of 150 pounds are by no means rare in China. The arrows used at the siege of the Legations in 1900 are 3 feet 5.5 inches long and 7/16 inch in diameter with heavy socketed steel heads. Some of the whistling arrows are 4 feet 2 inches long with heads four inches in diameter and six inches long. The bows that I saw in Peking that were used with such arrows were huge, about six feet long strung, with a cross section at the handle of nearly two square inches. They were said to pave a pull of about 200 pounds and looked it." 4 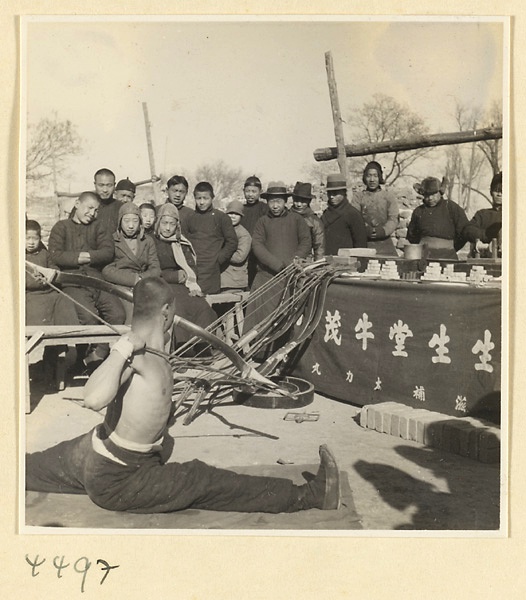 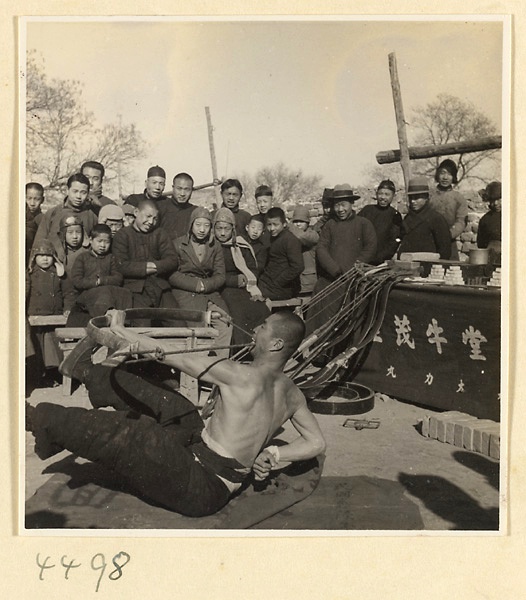 Above: two photos by Hedda Morisson, taken in the 1930s. The puller seems part of a demonstration that goes with a tradesperson: Judging from the sign, they seem to be promoting a medicinal herb called 牛荗 or "oxen herb" from their company Sheng Tang, or "Hall of Life". The man was probably hired to demonstrate the oxen-like strength the medicine was supposed to give the user.

This may seem a little far-fetched, but already in 1724 the Yongzheng emperor warned about the use of medicine in strength training:

“If there are those who wish to learn how to use a hard bow, they should practice naturally, gradually increasing the strength of the bow. How can one go to such extremes as to take medicine? Unless one knows the nature of the drug there is the chance that people will be hurt. Besides, using a hard bow on horseback is difficult, so what is the advantage? A bow that is of strength six [80 pounds] or greater is enough.” 5

Those who were eager to master the use of hard bows were in the emperor's view all "ambitious" (心上进之人), and for that reason the greater the pity that they were wrongly harming themselves.

The Gōngbù jūnqì zélì (工部軍器則理) or "Regulations and Precedents on Military Equipment for the Board of Works" describes in detail the materials needed for making the different types of bows. These regulations covered the manufacture for all military equipment of the state-equipped armies.

"Each horn bow has a bamboo core, one face covered with slabs of horn.
The ears are made of strong wood.
The back is covered with sinew, which covered with birch bark.
Both ears have horn nocks and string bridges.
For the string, silk thread is used. This completes the manufacture.

"Compared to the previous entry, one adds:
Buffalo sinew 2 liang."

"The bowyer spends one workday [extra]."

"For all of the above-mentioned labor and material, prices are subject to the local regulations." 6