Jebele is a type of Manchu open quiver that spreads the arrows out like a fan. The word literally means "right hand", which is where the jebele is typically carried. 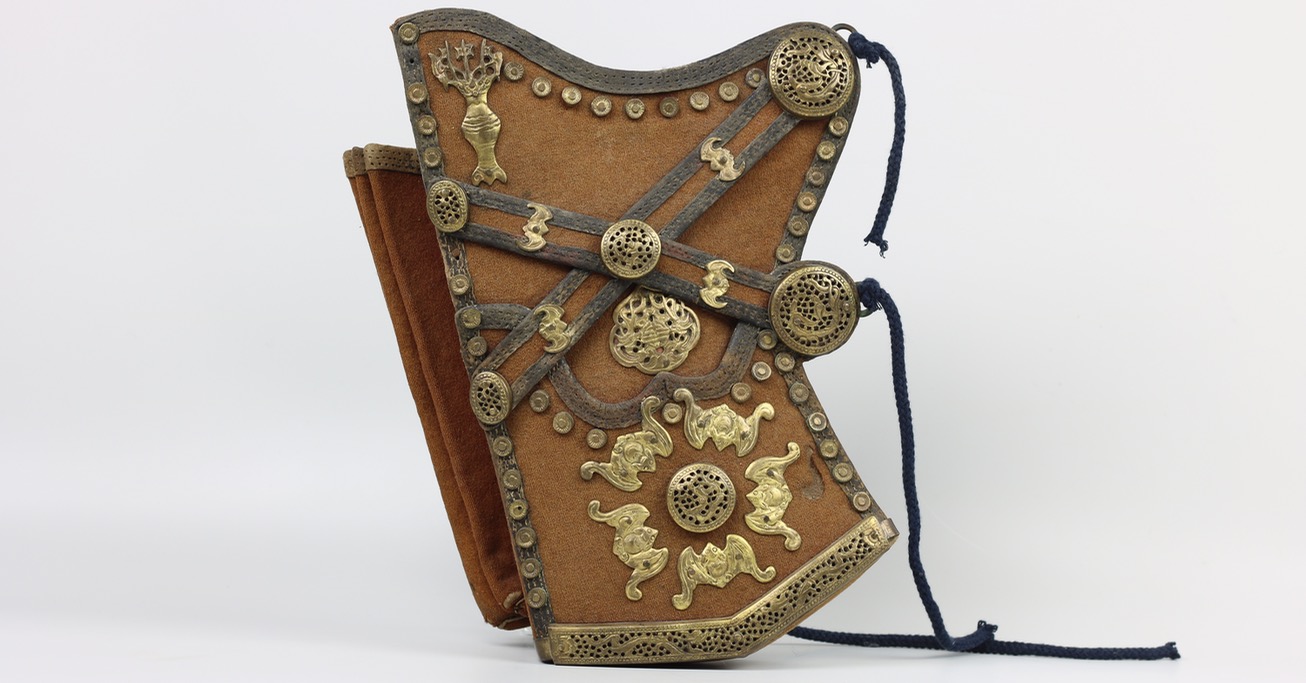 These quivers typically had layers of felt rolled up in the top to hold the arrows, and the bottom was filled with pine needles. At the back are almost always extra pockets for special arrows, usually three.

Sādài were usually worn on three occasions: during the hunt, when ready for war, or when dressed in full uniform for parades or military assemblies. During sports shooting or even the military archery examinations, arrows were customarily tucked under a belt. 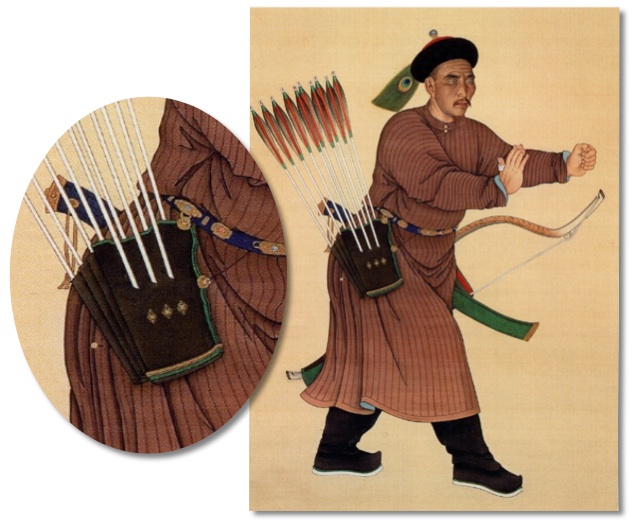 Manchu officer Badai and his quiver, of typical form for the 18th century.
Note the three slits in the front and the three pockets on the back that were common for this era.
Painting held in the Asian Art Museum of Berlin.

Badai lost his life during a battle. His eulogy reads:

Forcefully he took command of Bolot.
Foul leaders were seized and captured,
forthwith sent off to defend Khotan,  fighting his way into the rebels’ lair.

Thrown from his horse he mounted only
to find himself surrounded by the rebels.
To the bowstring he brought his arrows,
taking shot by shot the rebels down. 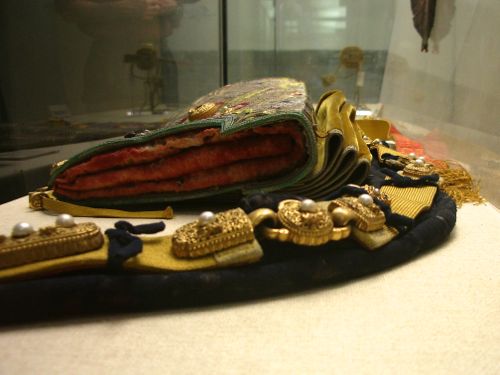 A quiver worn by the Qianlong emperor during the tri-annual Grand Review of the Troops in Beijing.
Notice the felt inner cushions and the three soft pockets on the right.
Palace Museum, Beijing.

For the jebele worn at official assemblies, there were regulations for who could wear what, and when. Some colors in regulations according to the 1766 Huangchao Liqi Tushi:

Imperial Auspicious Ceremony Guard: Gold and silver silk brocade with red and blue precious stones.
When riding out for auspicious ceremonies. This is the equipment to be worn with the auspicious apparel.

Imperial Guard Set 2: Vermillion leather with gold and silver embroidery
When riding out to the Yuanmingyuan and while returning to the Imperial Palace from there. On imperial ring hunts, when clearing the streets for the imperial progression, when the emperor returns to the capital.

Notes
1. See the 御製五體清文鑑 or "Five Language Compendium", military section. Published in 1794. While meaning quiver on its own, in some regulations, the Chinese term sādài is used to refer to the complete set of bowcase, quiver, and belt.
2. See the Qianlong era Huangchao Liqi Tushi (皇朝禮器圖式), or "Illustrated Regulations on the Ceremonial Paraphernalia of the Dynasty". Printed in 1766, based on a 1759 manuscript. It was reproduced again in 1801 and 1899 in the 大清會典圖, even though the court did not adhere to its contents anymore and different colors seemed to have been in widespread use, such as bright purple.