Language: Hindi
Source: In general use

Tīr (तीर) is the Hindi loan word for arrow or arrows. It is derived from the Persian tir (تیر). It was in common use in northern India.

A set of Indian arrows with different types of heads.
Listed by Mandarin Mansion in 2020. 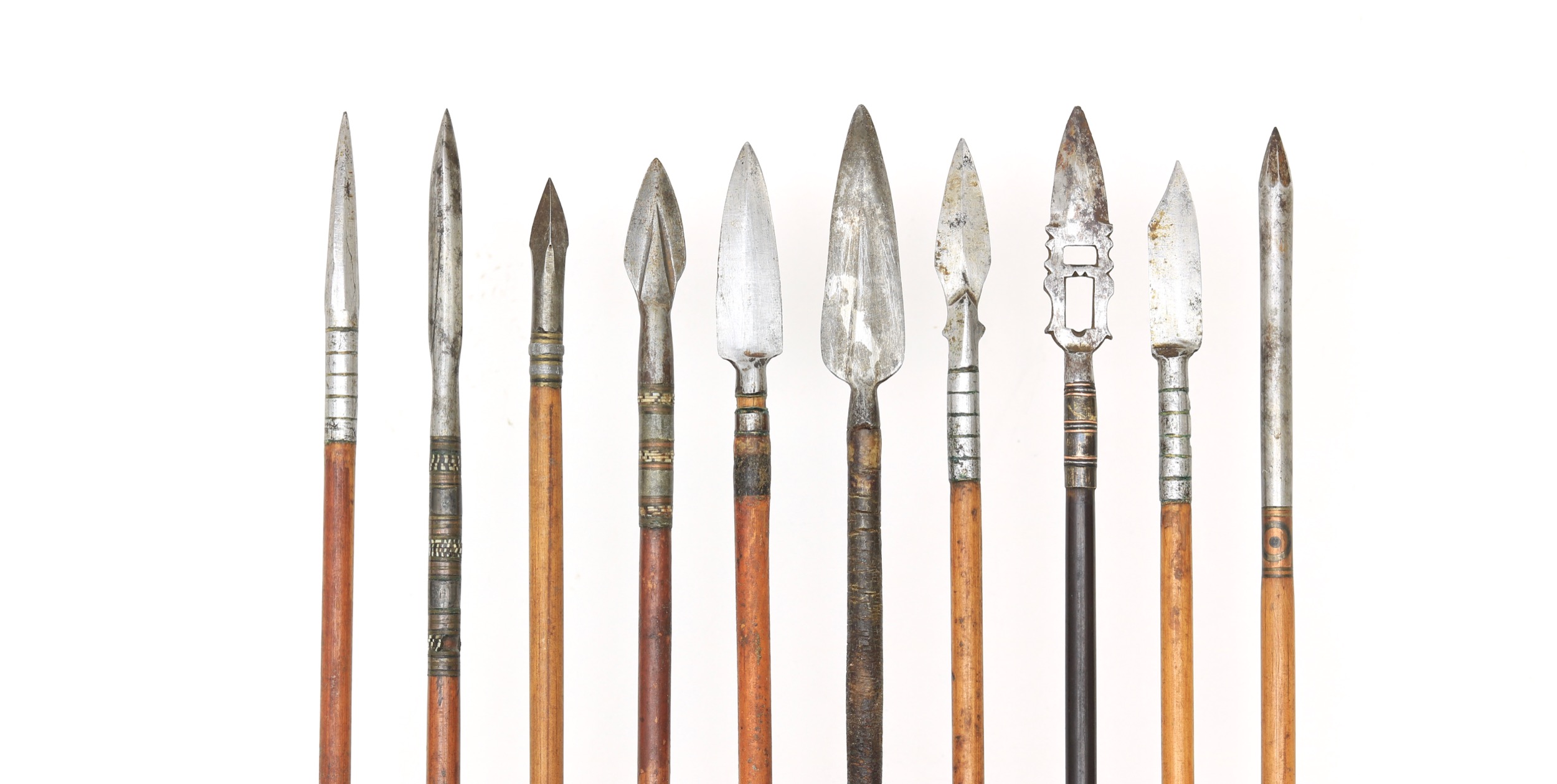 A variety of Indian arrowheads.
Listed by Mandarin Mansion in 2020.

According to A dictionary, Hindūstānī and English by Shakespear, arrow shafts were made from Saccharam Sara, a synonym of Saccharum bengalense, a type of bamboo grass.1

Another source, Handbook Of The Manufactures And Arts Of The Punjab by forest conservator Baden Henry Baden-Powell mentions Munj Grass, or Saccharum munja as an arrow shaft material.2

Parts of an arrow

From: William Irvine; The Army of the Indian Moghuls: Its Organization and Administration. Luzac & Co. London. 1903. Page 97.

Indian arrows come in an enormous variety of types, all made for different purposes. The literature mentions some sub-types.1

The Sikh Dastūr-ul-Inshā or "Rule of Epistles" mentions the following types:

In the above entries, tarah refers to the Persian tarh (طرح): "design".

William Irvine mentions some others in 1903.2

"Arrow" in other Indian languages

In his time (1780 — 1807) Captain Williamson, 87, found some very broad arrow heads in use in the west of Bengal, towards Bahar. There was one of crescent shape more than four inches across at the barbs. Though they did not penetrate easily, yet when they happened to graze a limb, they cut desperately. When discharged among bodies of troops they were found to do amazing mischief. 3

... When afternoon prayers are over, he shoots five arrows into the Khak Towda*, and then goes into the Womens Apartments.

*Khak Towda is a heap of fine Mold, well sifted, and beat strongly in betwixt two Stone Walls. 'Tis five Foot high, three Foot thick, and from three to four Foot broad. The Front of it very smooth and even, beat hard with a heavy Trowel. One who is well skilled, can shoot his Arrow into it quite to the Head; whereas one that shoots ill (be he never so strong) can't put a third Part in.

The arrows for this Exercise have the Iron Part quite round, about four Fingers long, of the Size of the Reed, until near the Point, where they are somewhat thicker, from which Part they taper gradually to a sharp point. The length, from the thickest Part to the Point, is from 3/4 to 1 Inch. 4

-Unknown author, in the camp of Nader Shah at Jalalabad, 1738

The arrow's description closely matches this type of Indian arrow: