Language: Chinese
Source: In common use

Liùdàomù (六道木), scientific name: Abelia biflora Turcz. is a shrub native to northeastern China that creates distinctive branches that are divided into sections with six grooves in them, each section alternating the position of the grooves. It is a strong and relatively heavy wood that is used for making arrow shafts, but also canes, staffs and Buddhist rosary beads.

Some sections of raw liùdàomù.
Notice the distinct cross-section.

On antique arrows, I have only seen its use on pieces that date from the post-Qing archery revival period of the 1930s-1960s and not on actual Qing arrows. I don't rule out earlier use though, as the wood does originate from Manchuria and is very suitable for the heavy shafts required for the Manchu style of archery. When I visited the Ju Yuan Hao shop on 2005, liùdàomù (六道木) was still harvested in Manchuria and cut to arrowshafts by Yang Fuxi.

Liùdàomù shafts can be recognized at first by their feel, being unusually stiff and heavy for their thickness. Second, by the appearance of six lines that run along the shaft's length in segments. On each segment, the placement of the lines starts in-between where the previous lines ended.

Section of an arrow shaft made of liùdàomù.
Notice how the grooves stop, and new grooves emerge between the placement of the former. 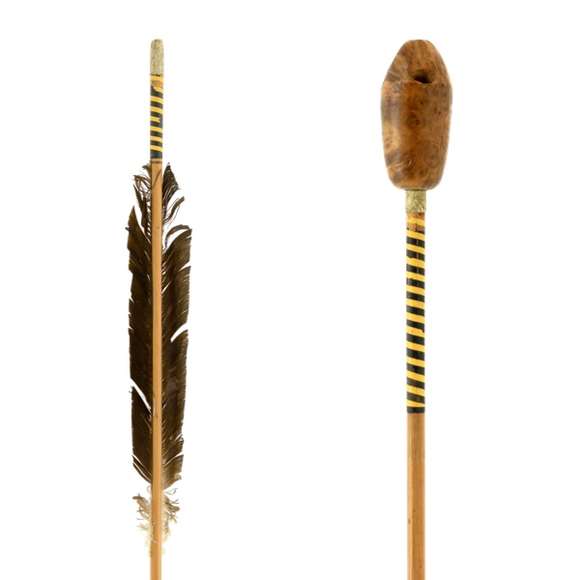 Dating from the revival period of Chinese archery in the 1930s.