Katar is the most commonly used term among collectors in the English speaking world to describe a type of Indian push dagger with a grip that is perpendicular to the blade. 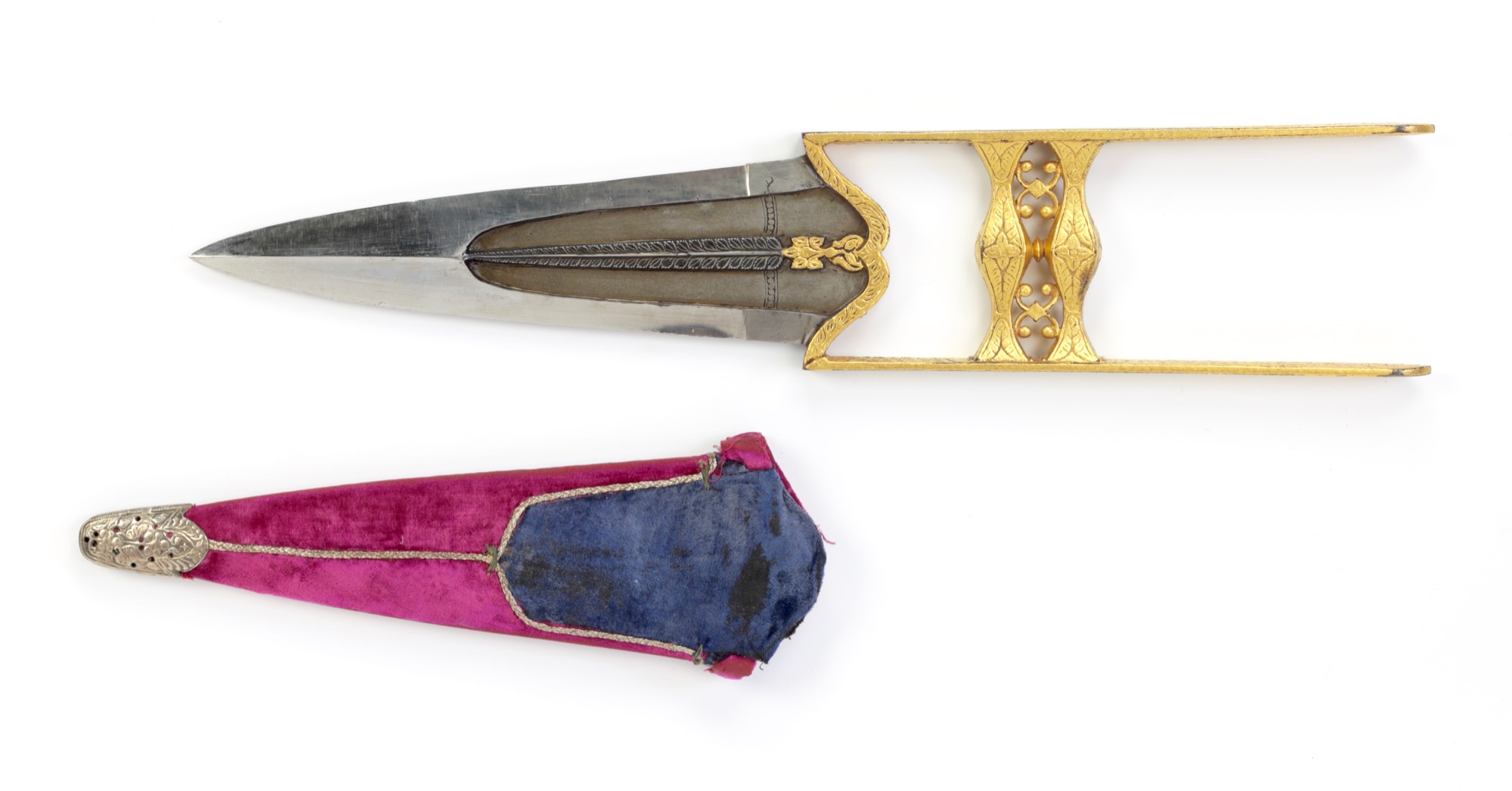 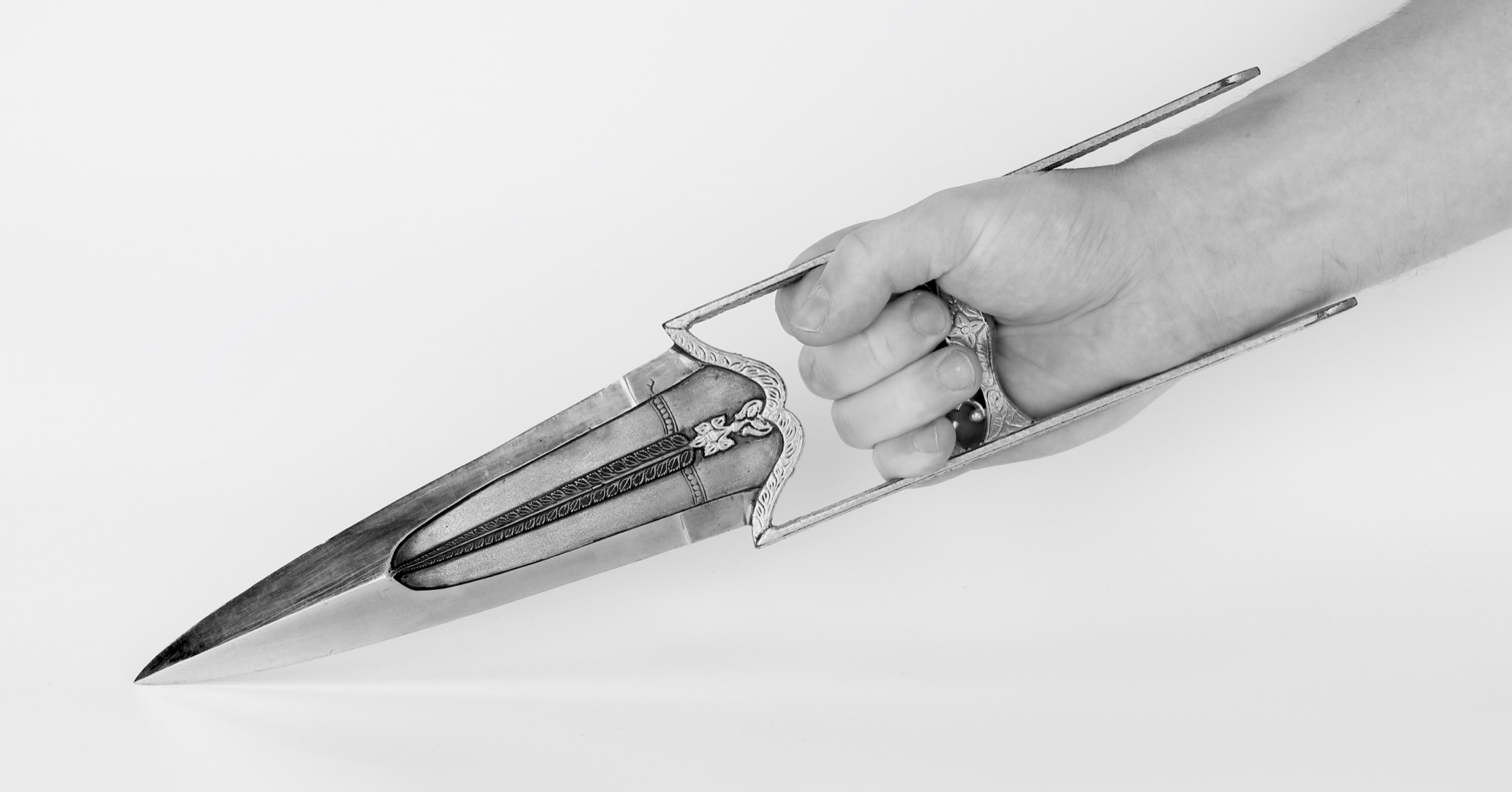 Historically, many forms of the word existed and they did not always point towards the same type of dagger. This is always going to be an issue when applying a modern urge to strict categorization to a time and place where this mindset was not present. John Shakespear's A dictionary of Hindustani and English of 1830 for example gives us:

The earliest descriptions of the weapon that I am aware of, in the 16th-century texts Ain-I-Akbari and the Bāburnāma, all mention it by the name jamdhar. 2

This has lead to some confusion. Here a page in the Ain-I-Akbari, where three are depicted: 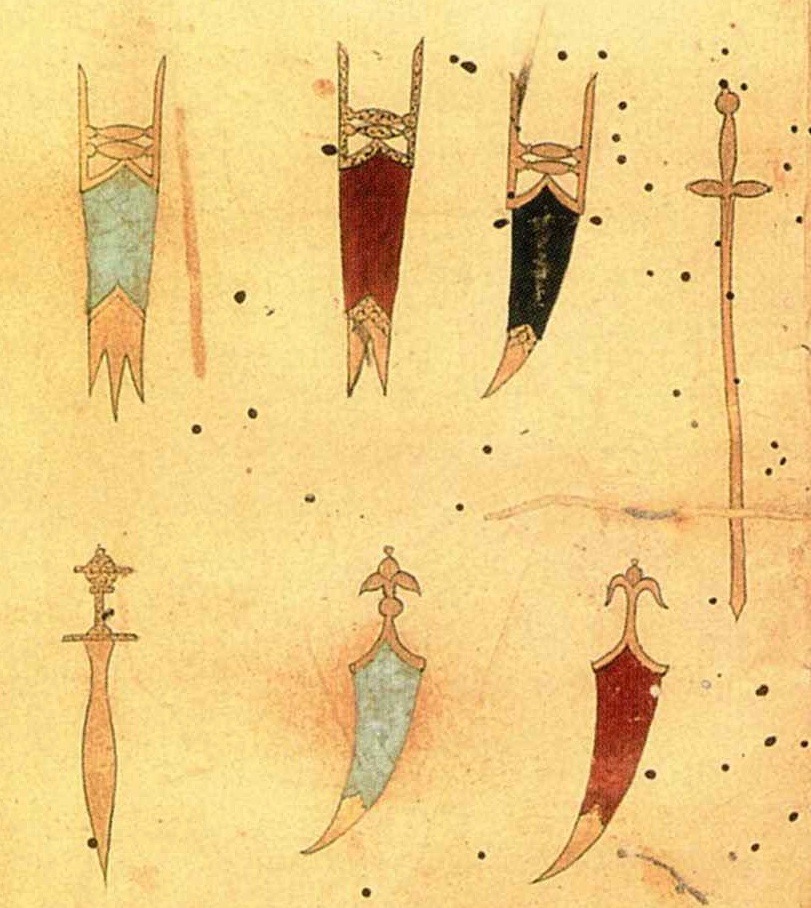 Weapons in the Ain-i Akbari.

The fact that the jamdhar in the Ain-I-Akbari is curved lead some to conclude that jamdhar is in fact the name for the curved katar.

William Irvine, writing in 1903, even turned it around. He thought that the jamdhar was the wide-bladed straight katar, and the katar meant to describe those with a curved blade.4 He went by illustrations in Blochmann's 1873 translation of the Ain-I-Akbari, which were not based on the original plates in the Ain-I-Akbari.5 Aziz Abdul is similarly lead astray by the writings of Irvine and 19th-century drawings published by Blochmann:

"The katār or katāra is a beautiful weapon with handle similar to that of a jamdhar, but the blade is much narrower and longer, and is curved." 6

Jamdhar is probably synonymous to katar for the simple reason that straight katar were in widespread use at the Mughal court, yet the word katar does not turn up in the Mughal courtly texts of the 16th century.

Jamdhar is thus simply an earlier, northern term for katar.

Other sources can be found on some of the weapons itself.

The Metropolitan Museum in New York holds a katar with an inscription attributing it to Maharajah Ram Singh of Bundi, a city that was a major center of production of katar. The blade bears inscriptions in the local Harauti language, using Hindi script in gold that uses the word katari (कटारी):

"Bundijaram, Lord of Bundi, will protect with this katari,
[for], when it pierces, is like the tongue of death."

Another is in the Royal Collection Trust, accession number RCIN 11408: 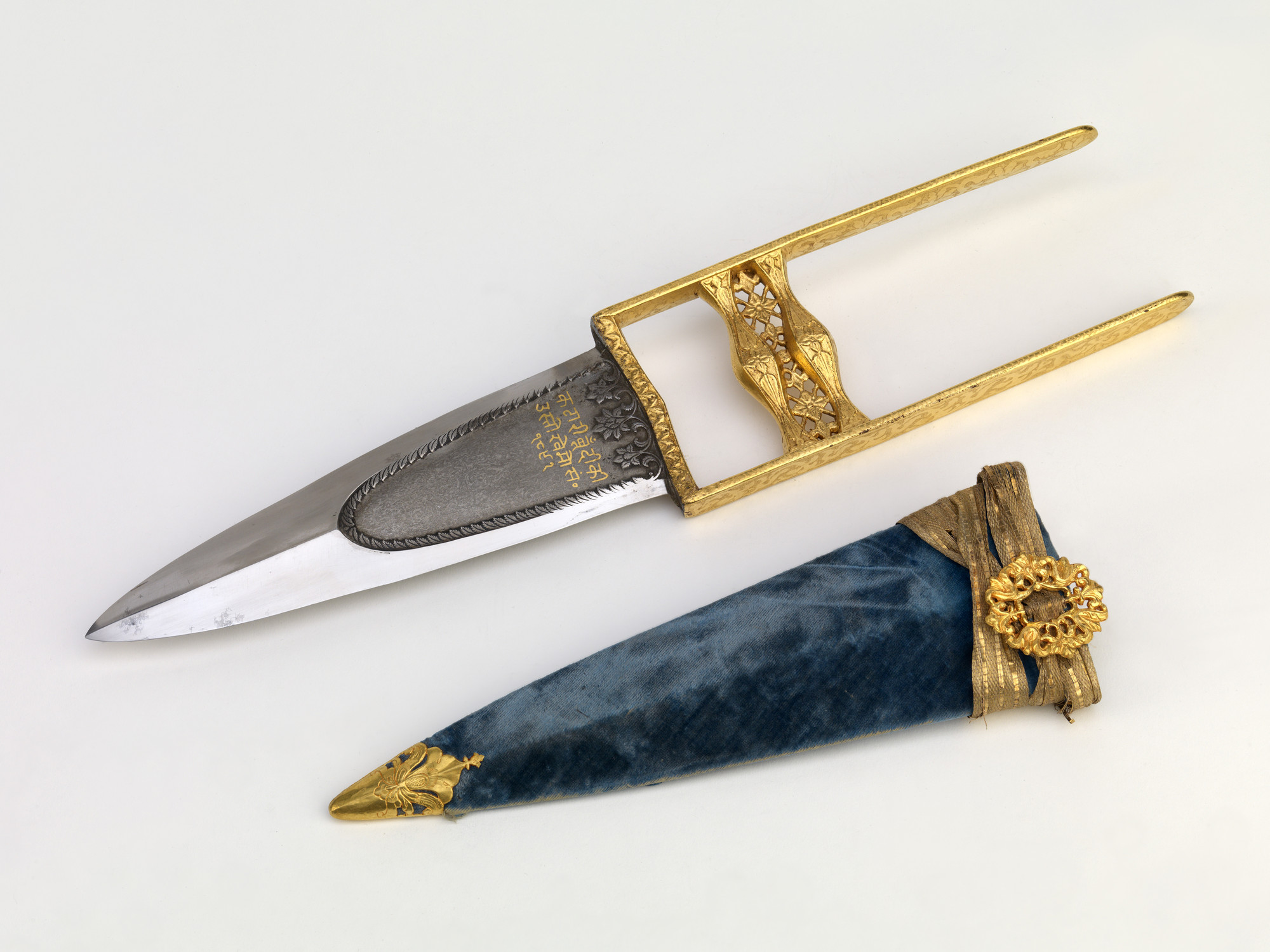 This katar was presented by Maharao Raja Ram Singh himself to Edward VII, when Prince of Wales, during his tour of India in 1875-76. The blade is marked:

(The year 1892 samvat translates to around 1835 in the Gregorian calendar.)

The language used on both Bundi katar is Harauti, a local language spoken in southwestern Rajasthan in district Kota, Bundi, Jhalawad, and Baran and neighboring areas in Madhya Pradesh.

In Hindi the word kataar (कटार) is used for "dagger" of any kind.

In other Indian languages:

The katar was highly popular for centuries, with all cultures on the Indian subcontinent from Hindus to Sikhs to Muslims, but surprisingly, never gained any popularity elsewhere.

The weapon is worn in the belt or kammar band, to which it is fastened by a strong cord or by a band of Sambar leather. The cord is sometimes wound round the wrist when the Katar is in use, to prevent it from slipping. The blade affords two wide surfaces for decoration. The Katar is a valuable weapon both for sport and war. 1

The origins of the katar are obscured by history, but Jens Nordlunde argues that it may well have originated in the 10th century A.D. or earlier.2  What we do know is that by the 16th century we start to see fully developed versions of the katar, and distinct northern and southern styles.

The southern katar has developed from a long-bladed weapon with a hooded hilt in the 16th century to a flatter design without the hood in the early 17th century.

An offshoot of the hooded katar became longer and got a complete protective gauntlet, which is not known as the pata.3

A hooded Vijayanagara katar of the 16th century.
Sold by Mandarin Mansion in 2017.

A fine south Indian katar of the 17th century. The blade is riveted to the hilt, a typical southern construction.
Sold by Mandarin Mansion in 2019.

A fine north Indian katar. The blade is welded to the hilt, a typical northern construction.
Sold by Mandarin Mansion in 2019.