It produced among others small iron cannon, western gunpowder, "white powder" (白藥), mines and "foreign rockets" (洋火箭). In the 11th year of the Guangxu emperor (1882), Zhang Zhidong, governor of Guangdong and Guangxi urged to upgrade the facility to start to copy Western style breech loading cannon, which China had not yet been able to reproduce.1 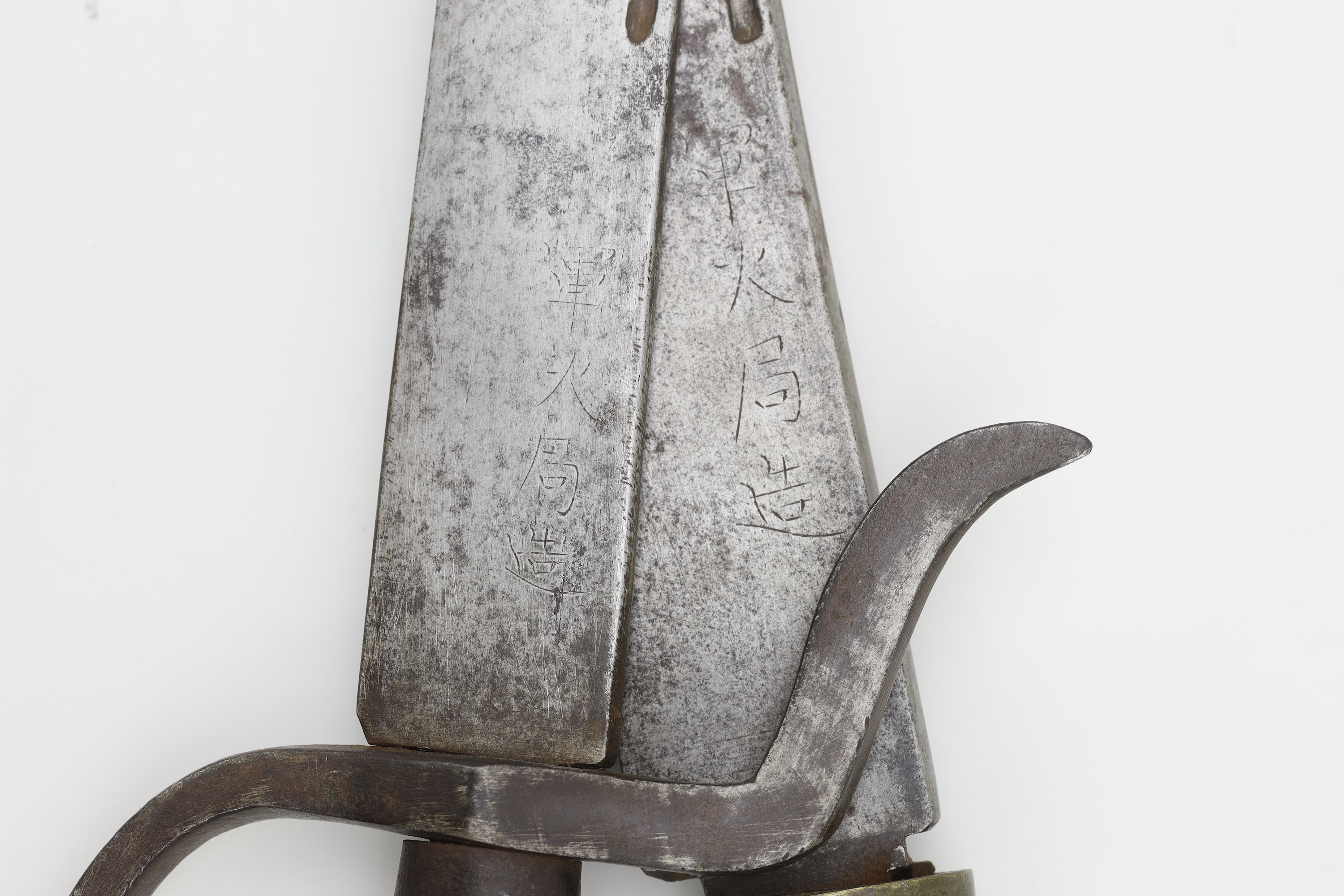 The first type that appears with such marking is a long, narrow, curved saber with a guard we are used to finding on húdiédāo (蝴蝶刀) that were in common use in the region from the 19th century onwards. It comes with a black lacquered scabbard that was once wrapped with metallic wire, something commonly seen in the late Qing and early Republican period.

Curious is the layout of the fittings on the scabbard. Of the three mounts once present, only the center mount with a suspension ring remains. The layout indicates a departure from Qing scabbard design, with a bar and two loops for the suspension system, to a barless construction where a center mount and mouthpiece hold the straps. This, along with the narrow, pointy blade style, is a return to the saber designs of the Ming dynasty.

The second type of sword I have encountered with the Jūn Huǒ Jú zào (軍火局造) markings is a large two handed saber. Where most Chinese two handers have long, narrow blades that follow Japanese ōdachi in form, this piece breaks with that pattern by having a blade that widens considerably near the tip. A design feature that improves slashing, that we also see on the civilian niúwěidāo (牛尾刀) that emerged in the mid 19th century. The large, flaring pommel seen on this piece is also almost exclusively found on niúwěidāo. It in turn is a revival of a late Qianlong period transitional pommel form.

Unfortunately, the guard was lost on this example, but it was most likely a typical niúwěidāo-style guard as well. 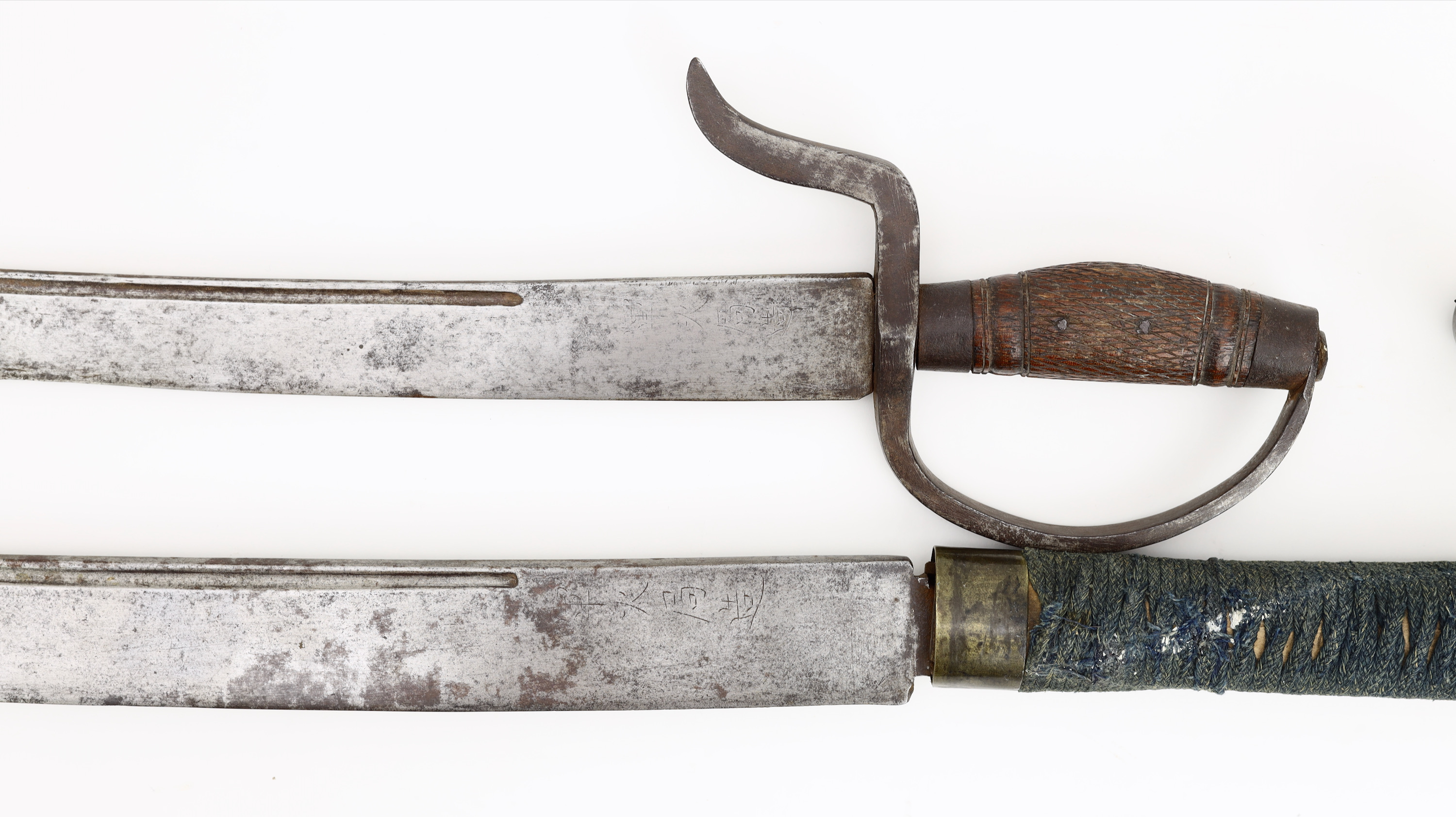 Both types of swords have distinctive, well-cut, deep but narrow grooves just under the spine. 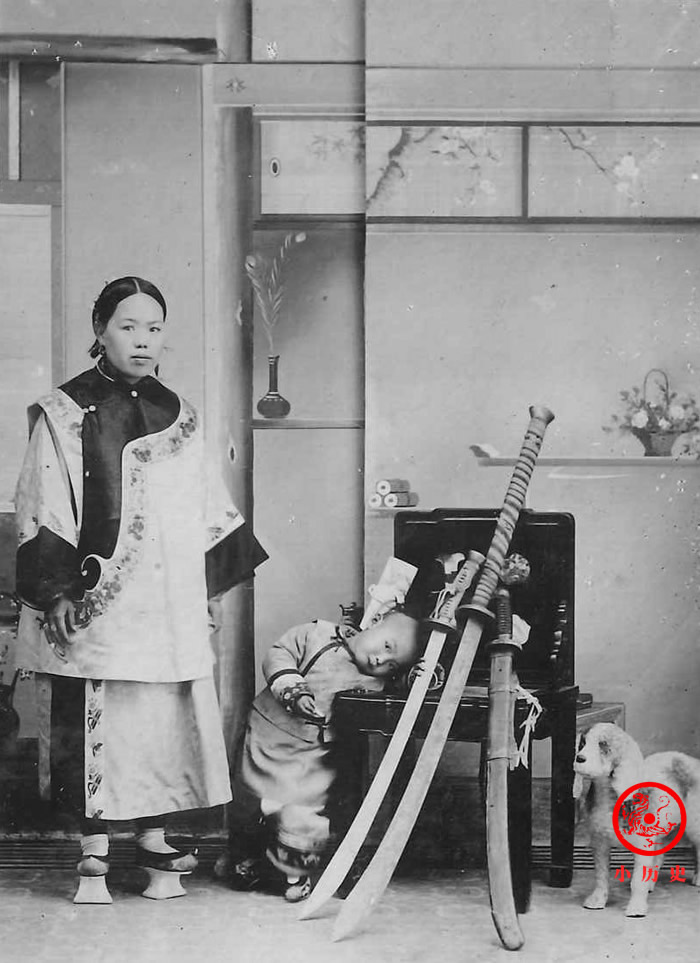 A Manchu Banner lady, recognizable by her shoes and dress, and their child.
They are posing with father's swords, a classic military regulation pèidāo, a niúwěidāo,
and a large two-hander, very similar to the one above.
Photographer unknown. Late 19th century.