Jamdhar (جامدار ), also written jamdar or jamadhar (جمادهر) is an alternative name for the katar that was primarily used under the Mughals in the north.

It was in widespread use under the reigns of Akbar, Shah Jahan and Aurangzeb.1

The name appears in the Ain-i-Akbari (آئینِ اکبری‎) or the "Administration of Akbar" describing the court of Akbar as it was around 1590. Here, it is used to describe three types of katar.2 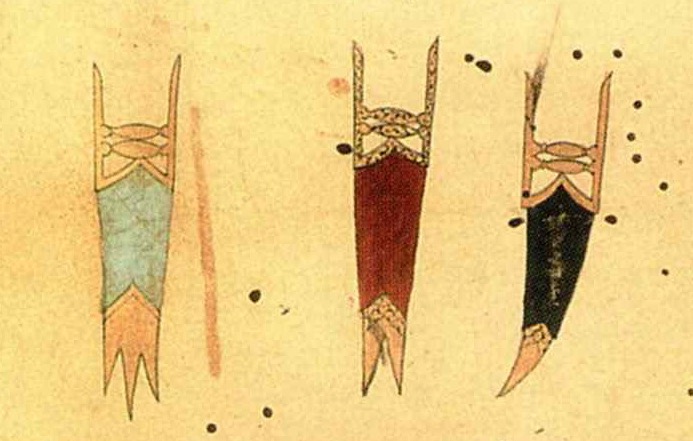 Illustration of three jamdhar in the Ain-I-Akbari of circa 1590.

The above three daggers are described, from left to right, as:

Most of the daggers are depicted sheathed, probably because it concerns high-end weapons that were worn as jewels, and so their outward appearance was more important than the exact shape of their blades.

From a Persian perspective, the word seems comprised of the words jam meaning "angel of death" and dahār meaning "edge of a sword".3 Looking at the Sanskrit, it could derive off jam (जम) "death" and dhára (धार), "a sharp edge" combined jamadhar (जमधर) or "death bringer".4

Jamdhar was probably simply the northern word for katar in early Mughal times. However, because the Ain-I-Akbari did not illustrate the conventional straight katar, it has lead some to believe that jamdhar was exclusively used for curved katar and the word is now commonly in use as such among English speaking collectors.

Notes
1. Aziz Abdul; Arms and Jewellery of the Indian Mughuls. Lahore. 1947. Page 42.
2. Ain-i-Akbari (آئینِ اکبری‎) or the "Administration of Akbar" describing the court of Akbar as it was around 1590.
3. Manouchehr Moshtagh Khorasani; Lexicon of Arms and Armor from Iran. Legat Verlag GmbH, Tübingen, 2010. Page 186.
4. Lord Egerton of Tatton; An Illustrated Handbook of Indian Arms. W.H. Allen, 1880. Page 22. And William Irvine; The Army of the Indian Moghuls, its organization and administration. Luzac & co, London. 1903. Page 86.