The Chinese "tiger forks" or hǔchā (虎叉) is one of the classic weapons in Chinese martial arts.

They were probably originally designed to fend off or kill large dangerous animals, like bear and tiger. It is hard to imagine today, but little over a century ago such animals were abundant in rural China and posed a real threat to local communities. Most villages had tiger traps and tiger squads to keep tigers well away from the village and protect its inhabitants. 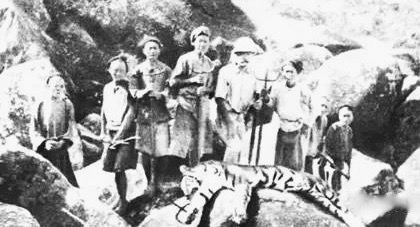 The tiger fork also made it to conventional martial arts use, to ward off that other potentially dangerous creature: humans. They are sometimes seen on old photographs in the hand of Chinese soldiers, militia, and guards in the retinue of an official. The weapon itself is heavy, but they would normally operate in teams with each its specific role. Its purpose in a group was probably either to prevent an opponent from reaching something that needed to be protected, or pinning the opponent down so that others could deal with him with other weapons. Qing soldiers at Xiamen, Fujian, in 1900. Two in the back carry large tiger forks. 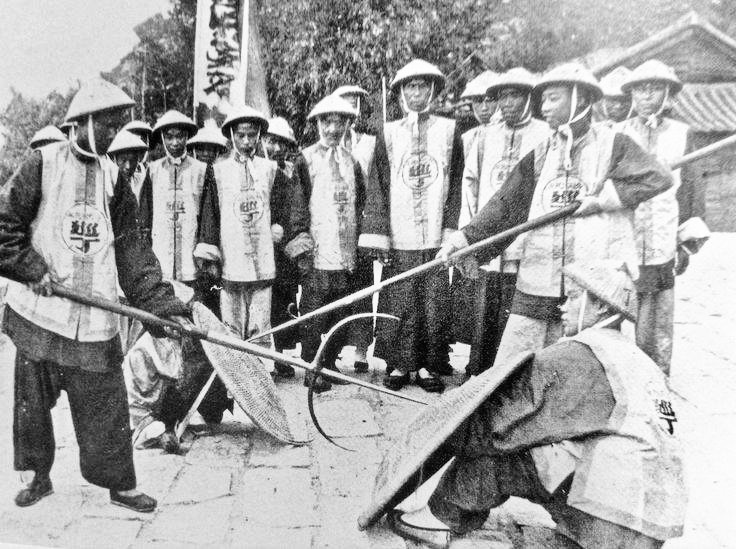 Their vests say xún dīng (巡丁) which means something like "patrol officer", possibly the guards of a Yamen.
Late 19th century. Unknown photographer. An antique tiger fork head on a wooden stand.
Sold by Mandarin Mansion in 2017.