Language: Derived from Nepali
Source: In common use among English speaking collectors

The hanshee khukurī or simply hanshee is an early type of khukurī that is characterized by having a long hilt and a rather long and relatively narrow blade with a strong curve. Other than most types of khukurī which double as fighting and utility knife, the hanshee appears to have been purely used as a weapon.

Origin of the term

The hanshee appears to have been most popular in the late 18th and early 19th century and seems to have fallen out of use by the mid 19th century.

"These Kukri knives were very popular in the unification period of Nepal (1750-1770) and continued to be used in the Anglo-Nepal War 1814-1816 and up till the Indian Mutiny 1857, from whence it declined in popularity."

He also writes that one of the defining features is a handle length of at least 13 cm.

There are at least two khukurī of this form in the National Museum in Kathmandu that attributed to Dravya Shah who reigned as the King of Gorkha between 1559-1570.1 However, their shape is no different from the ones encountered in the first decades of the 19th century, and to me, they seem like a case of misattribution. The fact that none of the Indian arms, nor the kora, in the same display appear quite as old but rather dating from the 18th and 19th centuries instead strengthens the idea that we are looking at a mistake by whoever set up the display.2

The first clear representation of the hanshee khukurī that I am aware of dates from the famous Fraser Album that was commissioned by the brothers William Fraser, a civil servant, and James Baillie Fraser, a Scottish travel writer and artist. It's actually not a single album, various folios survive that suggest there were at least two, maybe more. Unusual for the period, the album uses top local artists to portray not the elites but commoners. The Fraser brothers traveled into the hills to recruit Ghurkas for the East India Company, and despite the ongoing war between the British and Nepal between 1814-1816 he managed to find enough Ghurkas to fill two regiments to aid them in their travels and exploits. The Fraser album contains two groups and four individual Ghurkas, drawn when the brothers, accompanied by the Ghurkas, arrived in Saharanpur in July 1815.

Here are three images from the Fraser Album: 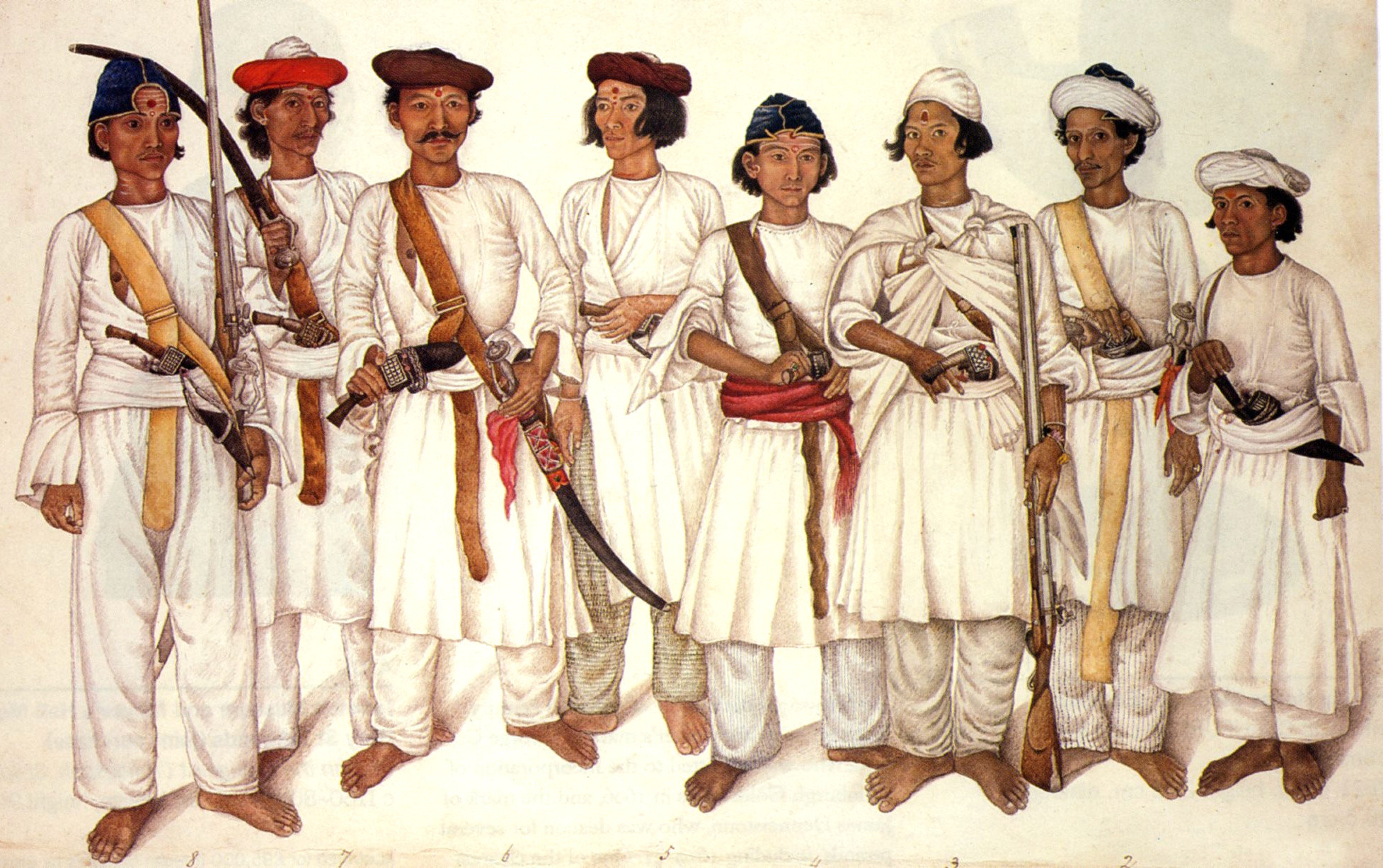 "Eight Ghurkas" from the Fraser Album. 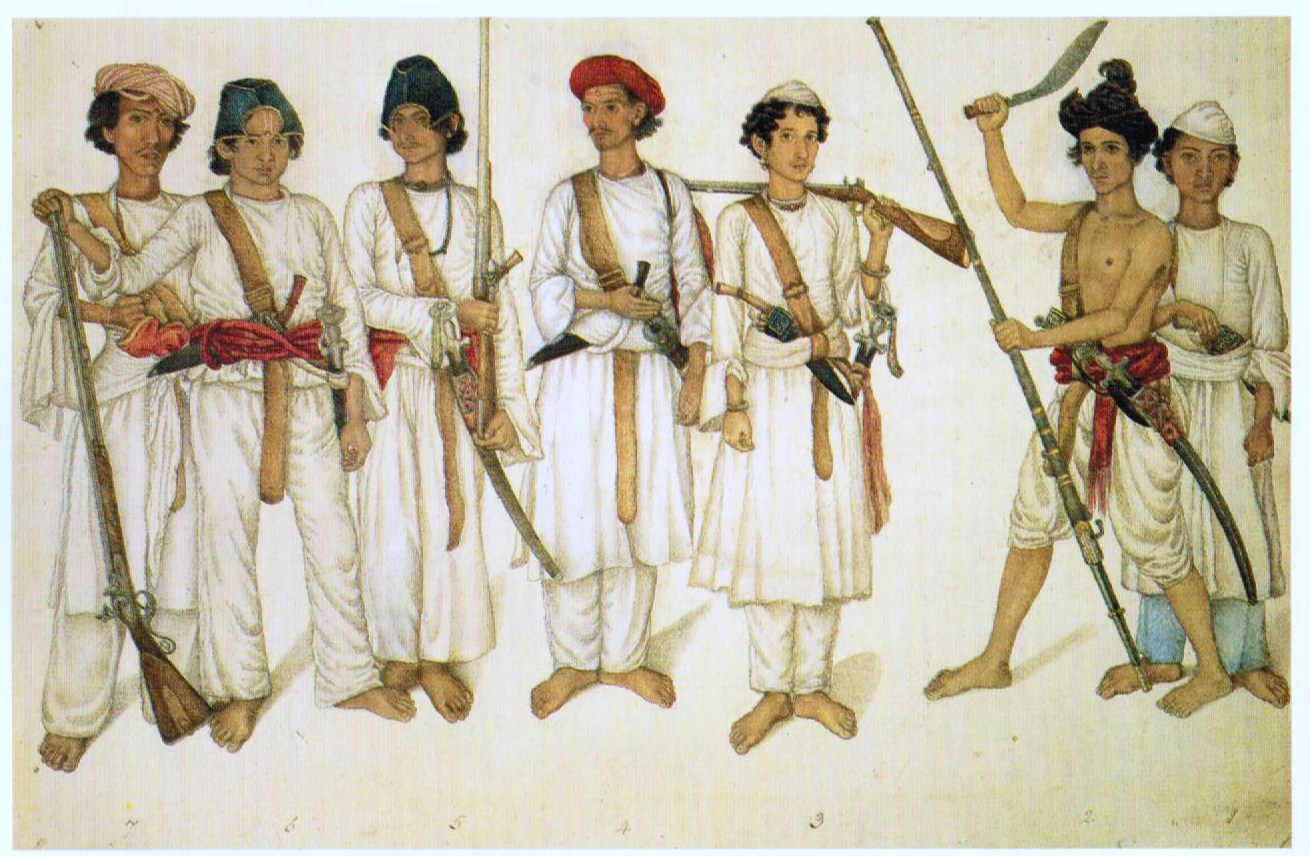 "Nepali soldiers" from the Fraser Album. 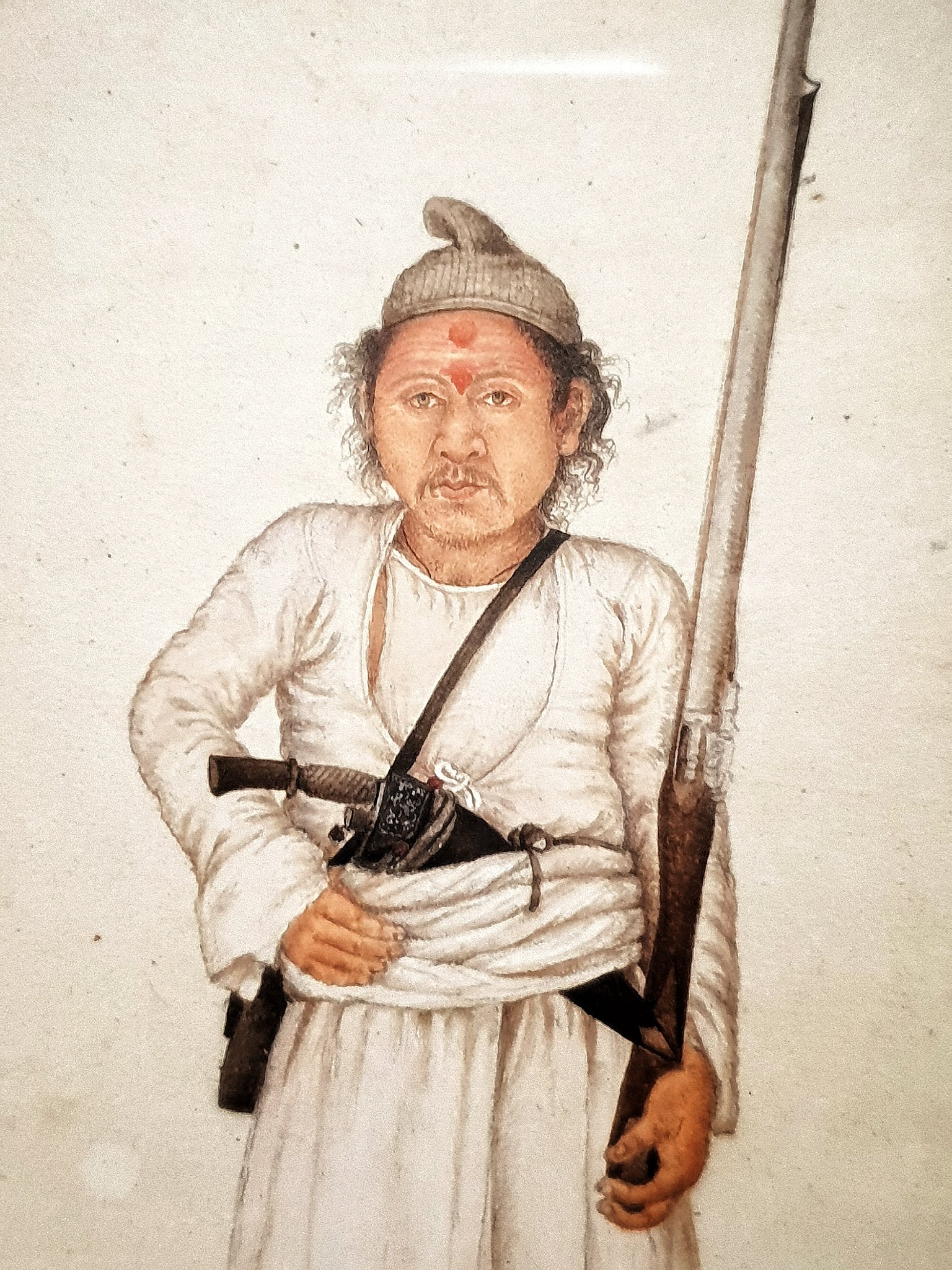 The earliest provenanced example I am aware of in a museum collection is in the Pitt Rivers Museum in Oxford. According to the museum records, It was collected prior to 1830 by Frederick John Shore (1799-1837), of the Bengal Civil Service.

Compare the remarkable similarity with khukurī in the portrait above, down to the square patch of embroidery. 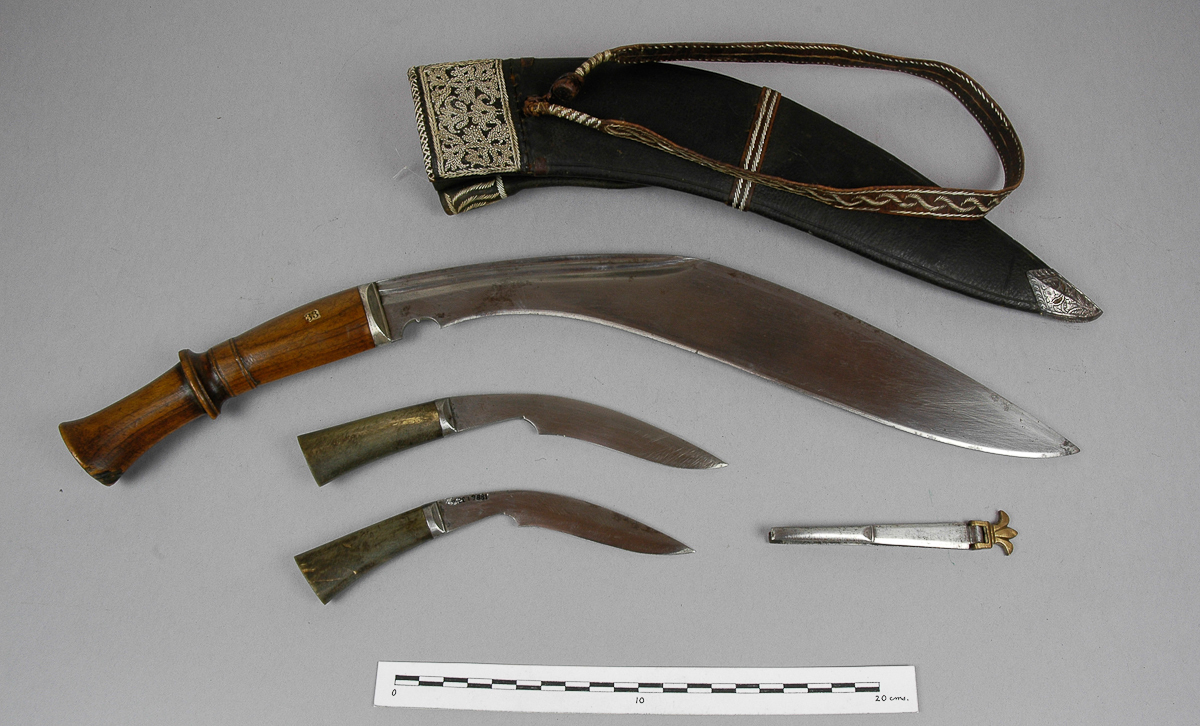 One hanshee was collected by Colonel Hamilton right after the Siege of Delhi of 1857, later in the Lord Egerton collection. It is illustrated in A description of Indian and oriental armour by Egerton.4 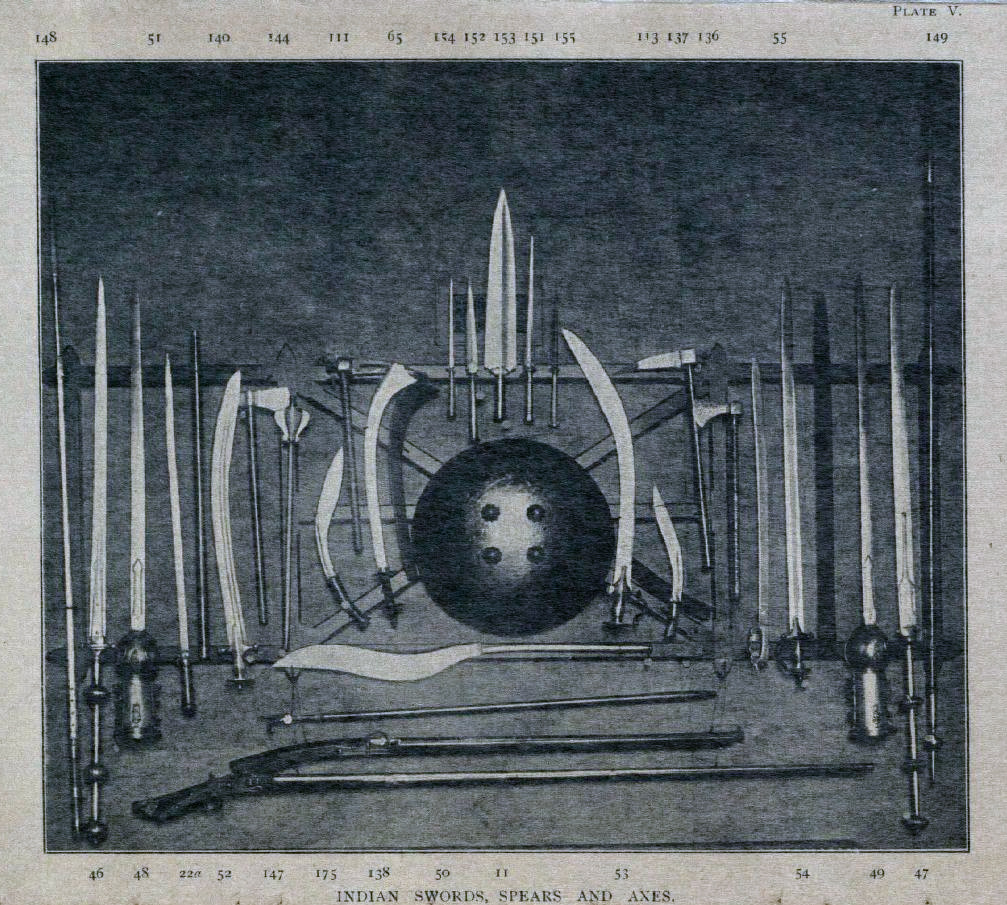 A particularly fine hanshee of the early 19th century is held in the Metropolitan Museum in New York, accession number 36.25.714a–g. Purchased from George Fenton in 1927, the piece was obviously already a century old at that time. 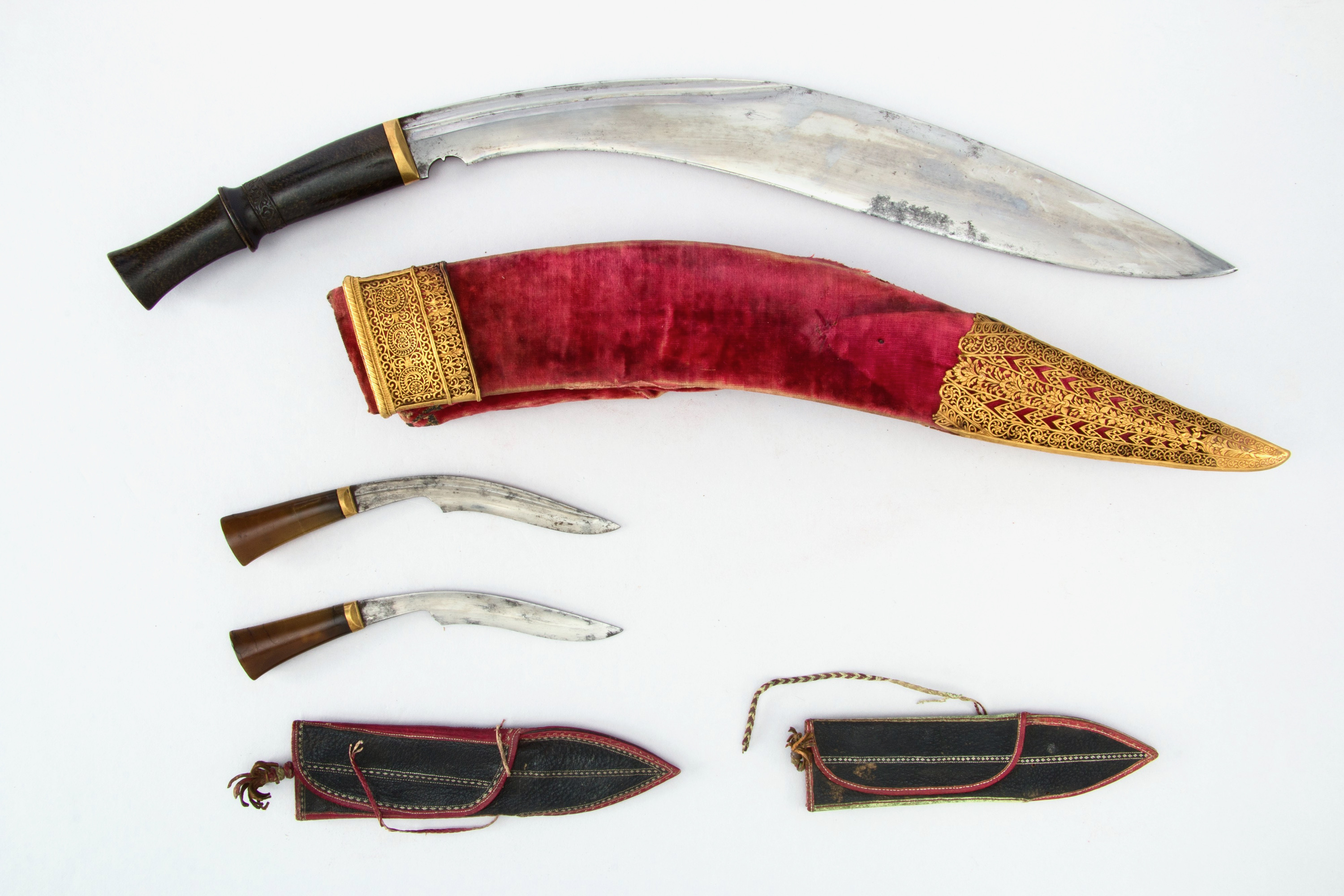 Notes
1. Thanks to khukurī collector Mike Butler for pointing me towards the right Nepali terms.
2. This display is published among others in the Nepal Khukuri Gallery at the kilatools.com website.
3. Compare two kora that were collected in the late 17th century are preserved in the Royal Danish Kunstkammer under accession numbers ECB2 and ECB4. For Indian arms, see among others Robert Elgood; Rajput Arms & Armour: The Rathores & Their Armoury at Jodhpur Fort. New Delhi: Mehrangarh Museum Trust in association with Niyogi Books, 2017.
4. Lord Egerton of Tatton; A description of Indian and oriental armour. W.H. Allen and Co, London, 1896.