Language: Sinhalese
Source: In general use

Dunna (දුන්න) is the Sinhalese word for "bow".

The literature mentions several kinds, among others:

The correct length for a bow is commonly considered to be a few inches more than the height of the man who carries it. According to this, its length would be about 5 feet 6 inches; but some are much longer, and two in the British Museum are about 7 feet 6 inches and 8 feet long. According to Dr. Davy the usual length in the early part of last century was 9 feet, but no bows that I have seen were of this size. The expression Maha Dunna, "Large Bow" as a fixed measure of length, possibly the nine feet of Dr. Davy, shows that some were of more than the average length. The Maha Bharata mentions one four cubits long (Adi Parva, 191, 20).

The strongest bows (Fig. 204) are made from a large thorny creeper termed the Mā Wēvael (Calamus rudentum); these are much thicker than the bows made from other kinds of wood (Fig. 203), or the strong tough ribs of the leaves of the Talipat palm which are sometimes used. Common bows have plain and rather rough surfaces, and are undecorated, Talipat leaf bows (Fig. 205) are slightly flattened on the outer side; all the rest are of a circular section throughout, the better kinds are highly decorated, being covered with
effective patterns in stick lac of various colours, chiefly red, yellow and black, and in early designs also green. They have no notches; the string, Dunu-diya or Dunu-lanuwa, made of the inner bark of trees or the fibres of the Niyanda plant (Sansievera zeylanica), is merely tied permanently at one end and looped over the other when the bow is about to be used.

"The Stone-Bow, Gal-dunna, of village youths is merely a weak bow with two strings, which half-way from the tips have some cross net-work or are attached to the ends of a small piece of hide used for holding the stone. The strings are kept apart by means of short sticks fixed transversely between them, one being near each end. Small birds are sometimes killed with this bow. A more powerful weapon of this type may have been used in early fighting, but it appears never to be delineated in the wihara paintings." 4 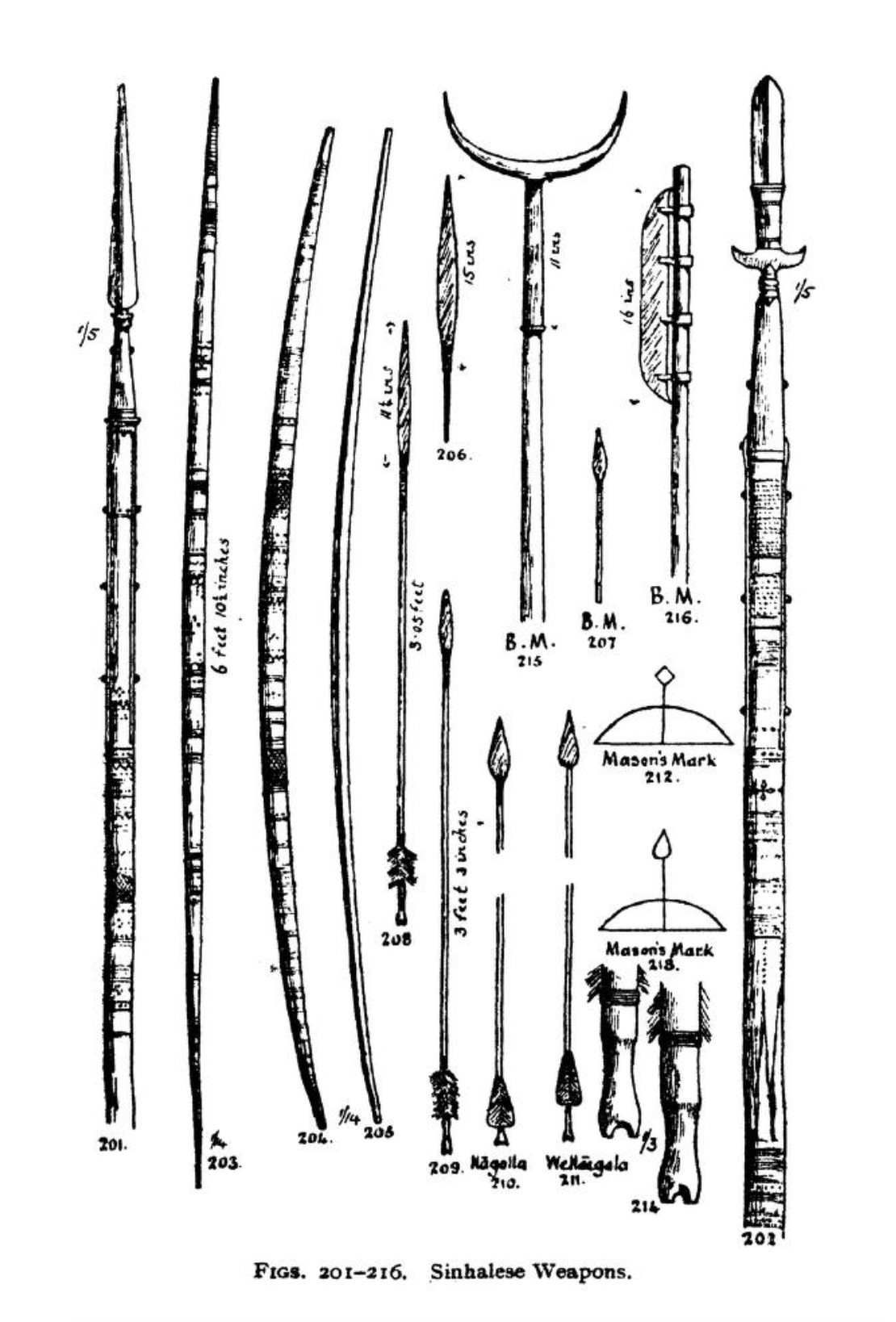 "The Maha Dunna or Usa Dunna is a simple longbow, generally exceeding the height of the user by two or three spans. A smaller but thicker and presumably more efficient form is the Miti Dunna which is commonly depicted on ancient frescoes and battle scenes. Some of them are self bows with the cylindrical staff of the Danu Liya. The cylindrical handle or grip of the Danu Mundava, is convex or planed flat on the outer edge or 'back', but planed down into a triangular section from the grip to each bow tip along the inner edge or the belly.

The Bammi Dunna or 'built bow' is more specialised, where lengths of two or more types of timber and horn are bound together to increase the resilience and power of the weapon. The flat inner length is usually the hard outer wood of the areca nut or kital palm, while the usual bow-making woods such as Gata vera, Tharandu, cane, or Kukuru marn were employed for the outer convex length. Ancient frescoes and carvings show the wood fastened together by three bands near the middle of the bow or eight or nine bands equally spaced apart at short intervals from tip to tip; in some instances they show a trident or axe at one tip evidently for use after the supply of arrows was expended." 5 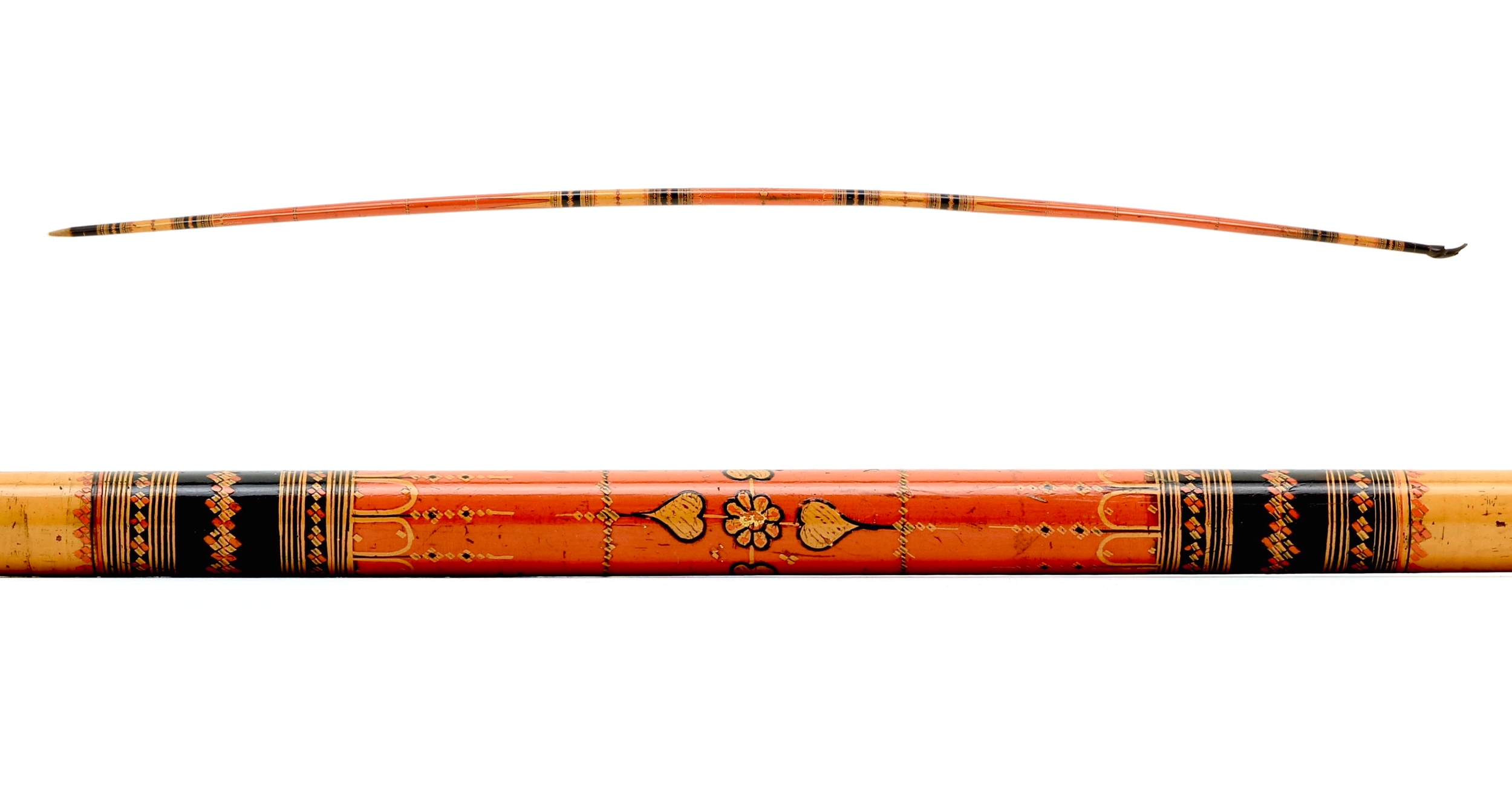 A Sinhalese lacquered longbow from the Royal Workshops of the King.
Listed by Mandarin Mansion in 2020.