It is used to describe a larger group of two handed sabers, so one cannot say chángdāo has a specific length, but generally they are between 120 and 180 cm overall, with hilts always shorter than the blade.

A Chinese long saber, or chángdāo (長刀) .
Sold by Mandarin Mansion in 2018.

Long swords were used in China since ancient antiquity, with long straight dāo (刀) appearing in artwork such as frescoes and statues, but by the Ming dynasty (1368-1644) had largely fallen out of use. The late Ming saw somewhat of a revival of the long sword, re-establishing a tradition that was to stay well into the 20th century.

In the 16th-century China faced frequent coastal raids by large fleets of so-called wōkòu (倭寇) or "Japanese pirates". The wōkòu were a mix of predominantly Japanese and Chinese sailors. A portion of them were rōnin (Japanese: 浪人), masterless samurai, and many of their weapons and tactics were based on Japanese methods of warfare.

The wōkòu were feared and famous for their use of their ōdachi, large two-handed sabers. In response, Ming general Qi Jiguang ordered his workshops to reproduce such sabers to fight the wōkòu, which he did very successfully. His initial style was based on the Japanese Kage-ryū (Japanese: 影流) a martial art founded circe 1550 by Yamamoto Hisaya Masakatsu.

For an overview of long sabers in the Qing dynasty, see my article: Chinese long sabers of the Qing

Notes
1. Mao Yuanyi (compiler); Wǔbèizhì (武備志) or "Treatise of Military Preparedness". Compiled in 1628 by Ming naval commander Mao Yuanyi. With over 10.000 pages, it is the most comprehensive Chinese treaty on military affairs ever written. 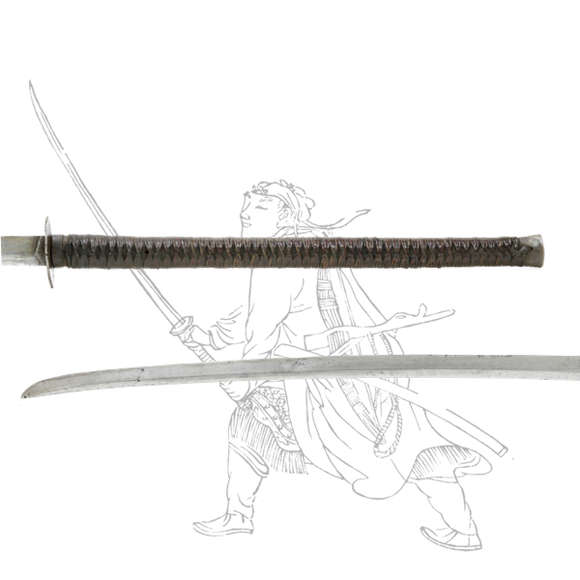 Its large blade is of ridged cross-section, inspired by the Japanese design.