Arnachellum of Salem was a famous 19th century maker of knives, hunting spears, daggers and cutlery. Salem is a city in Tamil Nadu.

"For the last thirty years Arnachellum, of Salem, has perhaps acquired the greatest and the most deserved reputation for the fine quality, as well as the finish, of his knives, hunting-spears, daggers, and table-cutlery. One point in which these have surpassed almost all similar steel-manufactures in Europe, has been their tough hardness, without being brittle ; the hunting-knives and spear-heads being found to resist blows on granite without being chipped. Fine Indian tools and cutlery are not liable to rust, and if the surface does oxidise, it is to such a trifling depth that it can be easily removed by friction." 1

Known works by Arnachellum of Salem

Extant works of his are encountered from time to time. Most are stamped "ARNACHELLUM SALEM".

The majority of pieces by him in European collections are high quality bowie knives, two of them are in the Royal Collection, accession numbers RCIN 38126 and RCIN 38127. Both were presented to King Edward VII, when Prince of Wales, during his tour of India in 1875-76.

Hunting spears are also known with "Arnachellum Salem" stamped on their blades. The type usually has a leaf-shaped blade and pronounced rib, like one sold by Mandarin Mansion in 2019. 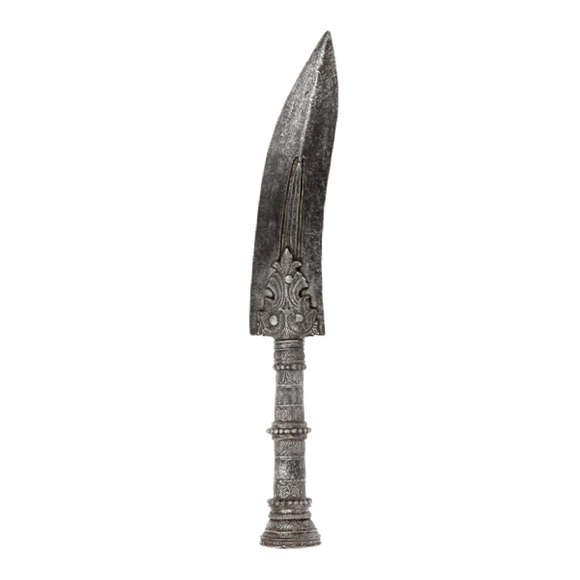 An unusual type with a broad leaf-shaped head with deep sunken panels.

A Chinese style fighting knife probably made in Yunnan or Vietnam.