Fine Chinese ironwork is very rare, probably because collecting culture in China itself was purged in the 1960s, and pieces were either destroyed or suffered neglect.

Luckily some fine pieces, mostly in the form of saber guards, made it to Japan where samurai and other sword bearers treasured them.

Japanese sword guards that exhibit any kind of foreign influence are today commonly called nanban tsuba by collectors and connoisseurs who are mostly unaware of the fact that some of these are not just foreign-influenced, but actually altogether foreign.

For more on this, see: Nanban Tsuba and Asian Export Sword Guards. 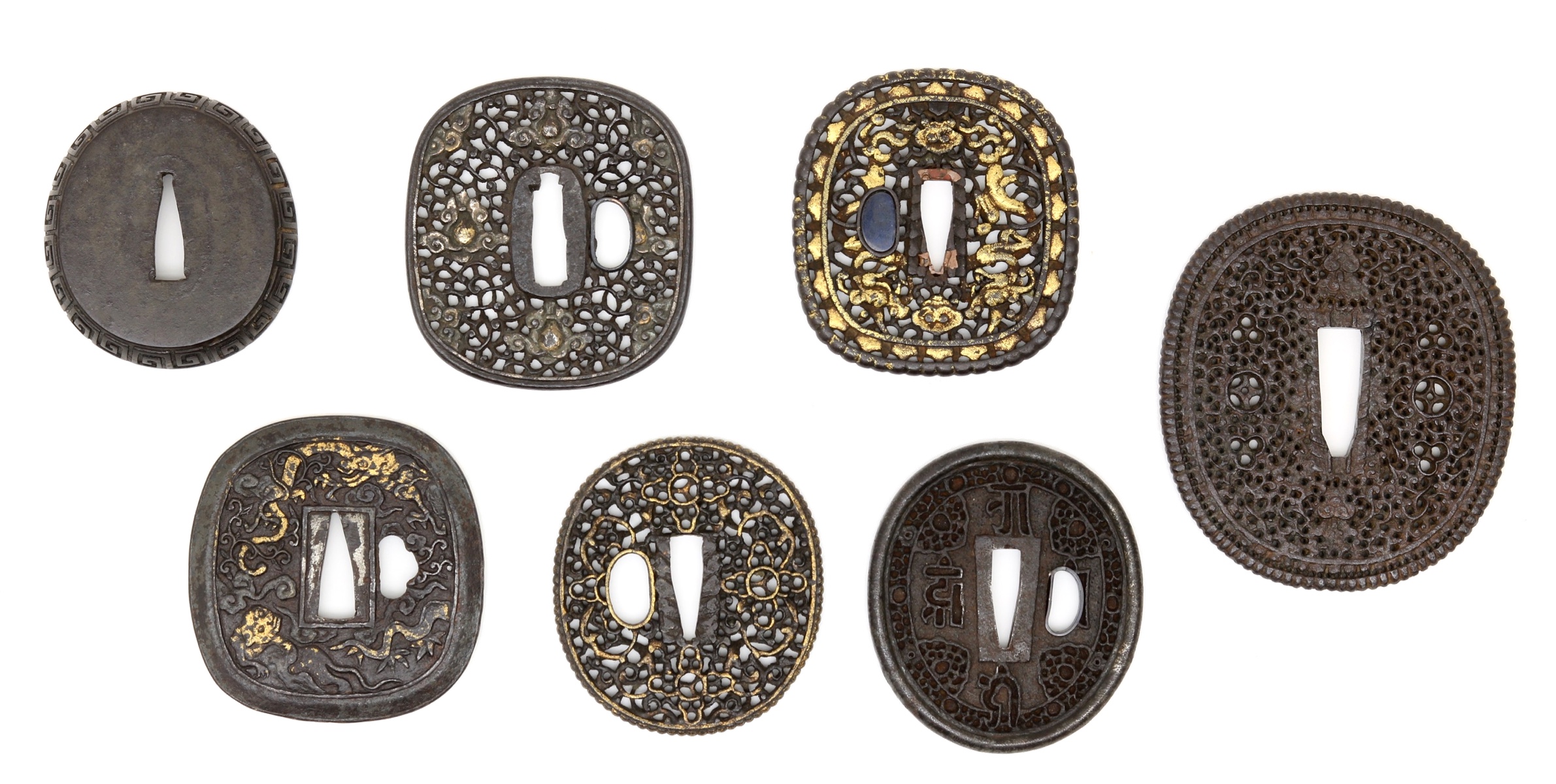 Old Chinese saber guards that were preserved in Japan, and altered for use on Japanese swords.
The example on the right is unusually large and was initially made for a large Chinese two-hander.

Japanese arms and armor is a vast field of study and one can easily spend an entire lifetime just studying one aspect of it. The downside is that researchers don't often venture outside of the borders of Japan to see how Japan influenced, and was influenced by, other cultures.

This inward view is commonly justified by the idea that Japan was largely isolated, apart from some regulated trade with China and the Dutch VOC, and therefore a deep study into foreign goods is not deemed necessary. Assuming there was no contact because it was illegal makes about as much sense as assuming no-one could be trading alcohol during in the United States during the prohibition between 1920-1933, because it was illegal.

Various non-Japanese records speak of blatant smuggling by among others the Chinese, even under auspices of the Nagasaki government in in the early 1700, but also through Satsuma, the Kyukyus and the Gotō islands. The Dutch noted the landing of ships not only from the VOC and the Chinese, but also from many nations that the Japanese officially did not do business with. A quick peek in the diaries of the headmen of Deshima between 1700-1740 shows the arrival of ships from among others Siam, Cambodia, Korea, Cochinchina, Nepha, Tonkin, Taiwan, and many other places.1 We can also expect significant smuggling being done by the House of Koxinga, who among others had a base in Hirado.

The above examples are merely scratching the surface of complex interactions between Japan and the rest of the world. To conclude, this supposed isolation of Japan is a bit of an outdated, narrow view, that is in the way of a full understanding of many aspects of Japanese material culture.

Even the much-revered NBTHK, an organization that authenticates and certifies antique Japanese swords, mounts, and related items, certifies purely Chinese sword guards and those from other parts of Asia as being of the "nanban school".

These certificates are all the more interesting because they not only fail to mention the Chinese style and origin of the pieces, the NBTHK's own rules exclude foreign objects from being submitted, and thus obtaining a certificate. This means that they actually think these are Japanese, despite being of a different style all together, never mind the workmanship.

This is no small thing, because the NBTHK is the go-to organization for collectors and dealers, and few serious collectors of Japanese arms would buy a piece without their papers. 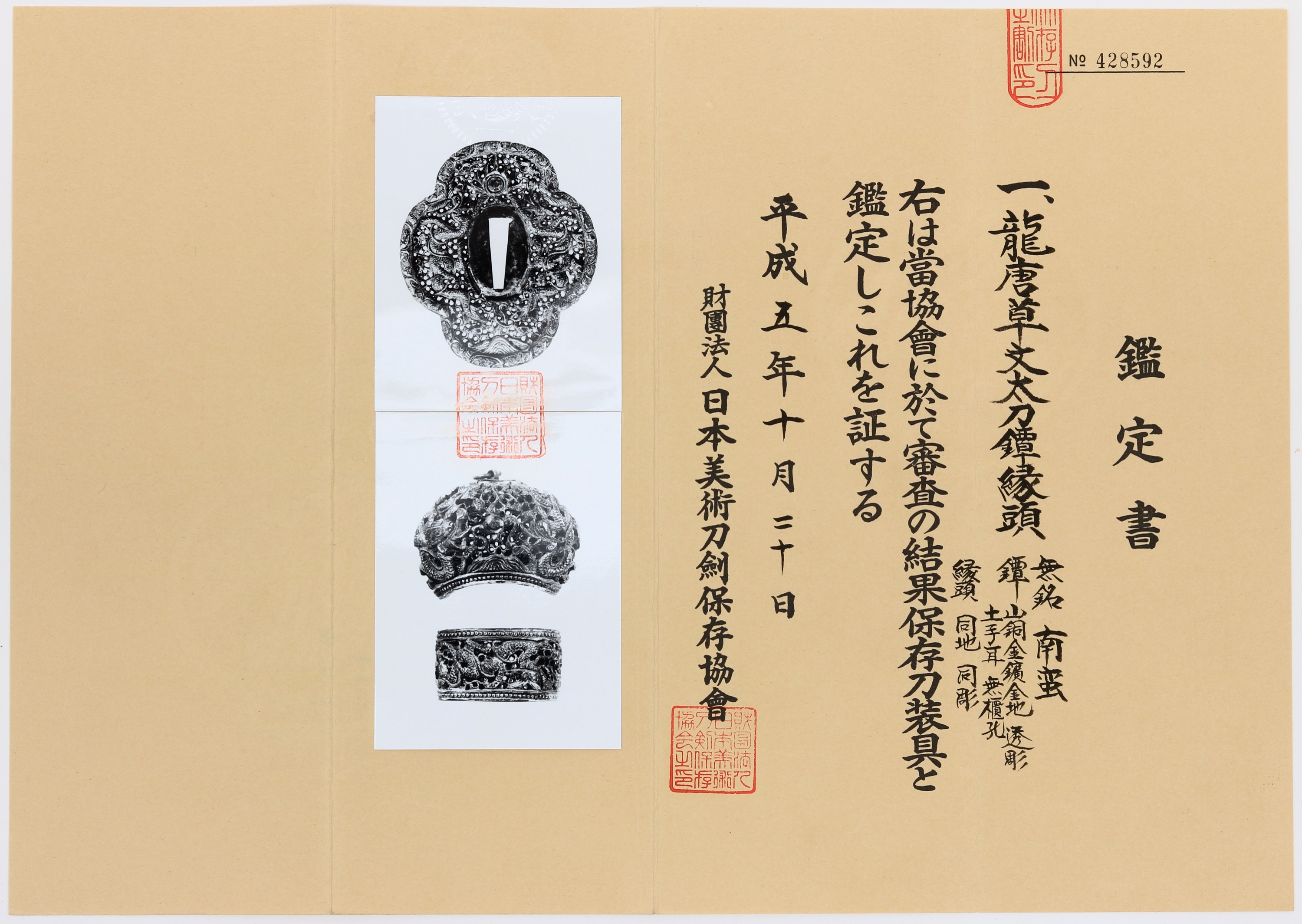 An NBTHK Hozon paper on a set of typical Chinese saber hilt mounts, for a Qing dynasty military saber.
The shape is typical for Chinese swords from the second half of the 18th century onwards.

The type of Chinese saber these mounts would have been mounted on. Notice the characteristic ball pommel.
Early 19th century. Sold by Mandarin Mansion in 2017.

Sword mounts in China and Japan

So why did so many guards survive in Japan, one might ask.

Sword mounts played different roles in China and Japan, and the difference between them helps understand why some rare types of Chinese guards were preserved in Japan.

Chinese swords are typically peened at the pommel, making its hilt an inherent part of the sword. As a result, a Chinese sword is appreciated in its entirety, one can say that a sword has a beautiful guard or pommel, because it belonged to that particular sword.

The Japanese sword is made so that on the removal of a single pin one can take the hilt apart. Japanese sword owners usually had a large of mounts for a single sword and they dressed up their sword according to the occasion.

"Sword mountings played an important part in the training of the Japanese of the highest classes. They formed a part of his daily life, they were frequently changed, and wealthy men are said to have had sufficient "stock" in reserve to allow favorite swords to appear in different dress each day in the year." 2

Because of the temporary nature of the mounts to the sword, the Japanese sword connoisseurship generally only occupies itself with the sword blade. The study and appreciation of mounts is considered a different field entirely.

This interchangeability created a collecting culture of sword mounts alone, mostly made by Japanese makers but, as we shall see, many also acquired a taste for foreign guards, like those from China, that were adjusted for use on a Japanese sword.

These early imported guards then gave rise to an entire genre of Japanese-made tsuba, in foreign styles.

Below illustrated a Chinese hūshǒu from the early 17th century (left) shown together with a number of Japanese tsuba (right) that were heavily inspired by Chinese designs. 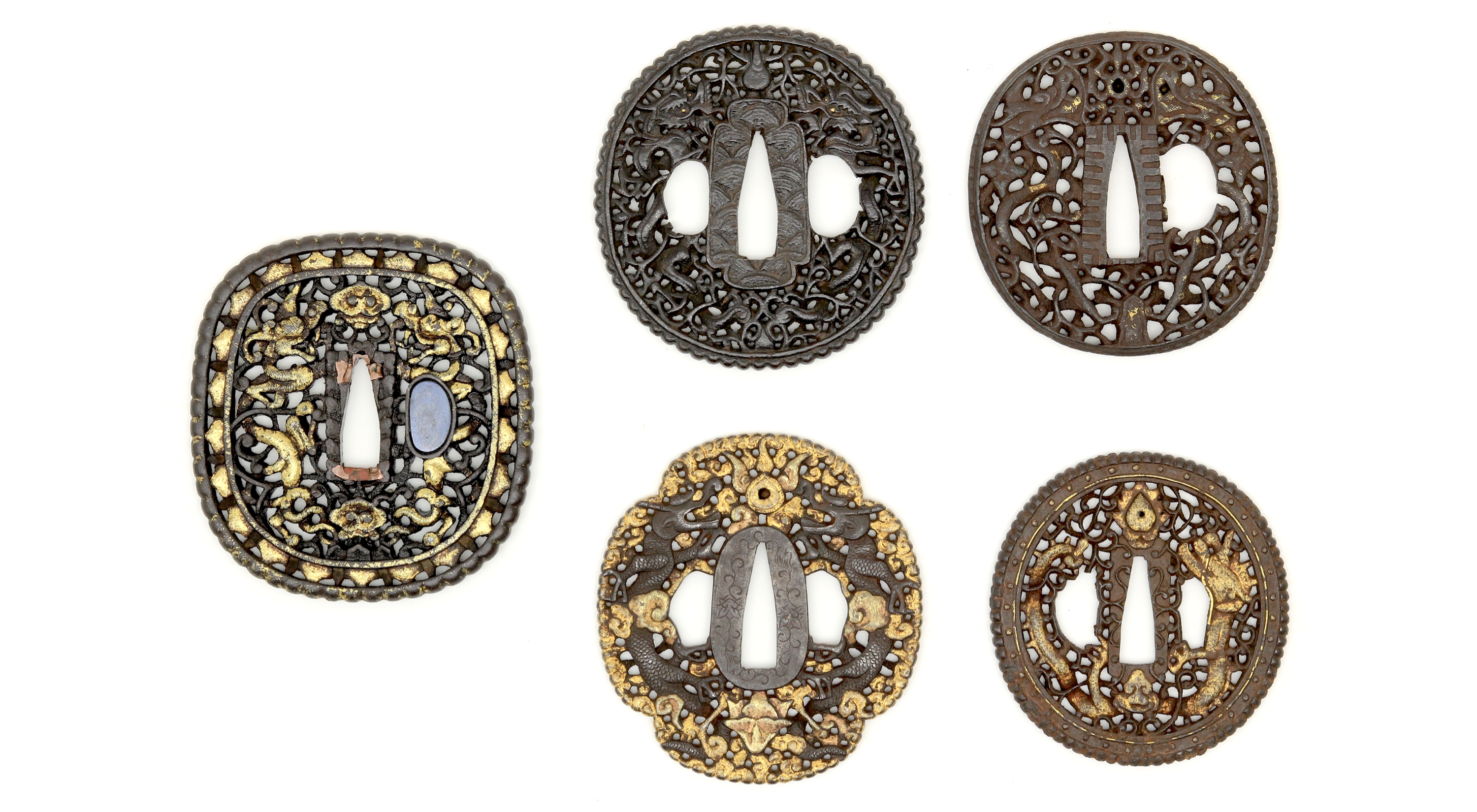 The Chinese guard shows various signs of being adjusted for use on a Japanese sword:

1. The addition of a hitsu-ana, an opening for the handle of a by knife called kuzuka. It was at some point fallen out of use again, and plugged with shakudo, a copper/gold alloy that was patinated a so-called "raven black".
2. The tang aperture, called nakago-ana in Japanese, was reversed. (Chinese guards have their designs upright when the edge points downwards, Japanese swords other than the large tachi were customarily carried with the edge up.)
3. The copper filler pieces to help a secure fit to the tang are typically Japanese. 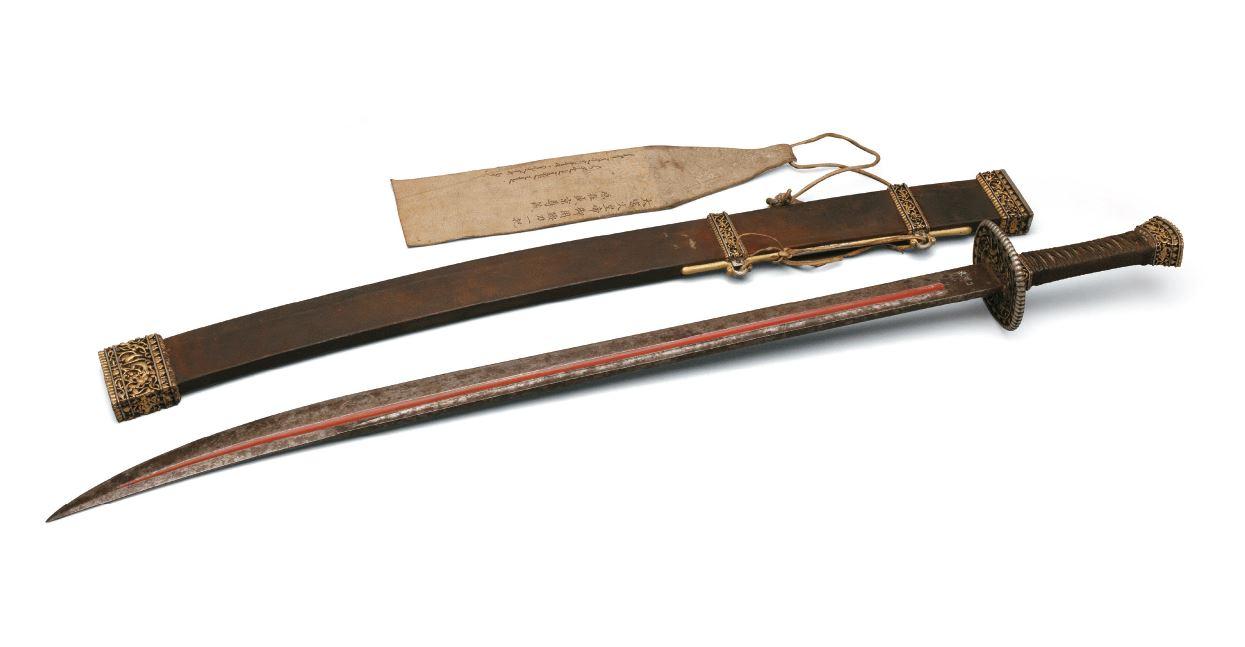 A nearly identical guard on a saber attributed to Hong Taiji (1626-1636), early Qing emperor.
The double rim with lotus petals is typical for 17th-century Chinese work.

Read more about Japanese, Chinese and Asian Export Sword guards by clicking on the various guards we currently have for sale, shown below. I will add some more during the course of this week.