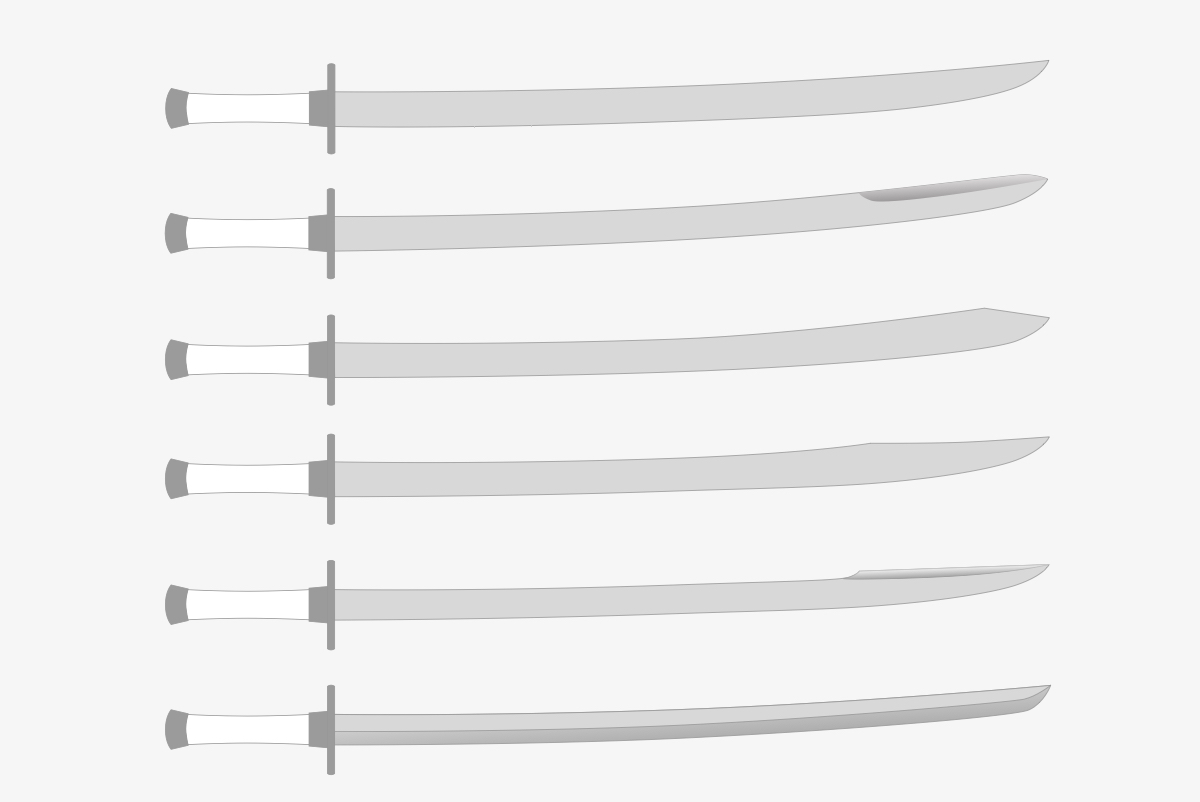 A typology of Chinese sabers

Historical references on Chinese saber types are scarce, and the information they provide scant. The most comprehensive Chinese military text is the massive Ming dynasty Wu Bei Zhi (武備志) or "Treatise of Military Preparedness" by Mao Yuanyi. It mentions the existence of 8 different types of saber, of which only two remained in use by the time or writing: The changdao (長刀) or "long saber" and the yāodāo (腰刀) or "waist-worn saber" which at the time was mostly used by soldiers in conjunction with a shield. None of the other types are described in detail.1

Qing period texts dealing with military sabers refer to them as yāodāo (腰刀) or pèidāo (佩刀) both synonyms for "waist-worn saber". Pèidāo was an archaic term that the Qianlong emperor re-introduced in court circles in the 18th century. The term yāodāo remained in widespread use on a more operational level. Regulations of this period focus mainly on the outward appearance of the sheathed saber, describing different mounting styles while not giving much -if any- detail on the blade inside.2

Then there is a 1932 martial arts manual by Jin Yiming (金一明) called "Single Defense Saber" (單戒刀). He admits most of the names have been lost by then already, but he does describe two swords as a miaodao or ("sprout saber"): a large two-handed saber, and a single-handed saber. The common denominator on both is the narrow, gently curved blade that most collectors now know as a liuyedao. This is remarkable because today the term miaodao is exclusively used for a large two-handed sword.3

Until more accurate historical information surfaces we are left with period artwork, early photographs, and antique examples to study. Pioneering work in this field is done by Philip Tom, who wrote an excellent introduction to Chinese sabers in "Some Notable Sabers of the Qing Dynasty at The Metropolitan Museum of Art".4

The current article aims to continue in this line, providing for the first time a basic illustrated typology of styles. Most antique Chinese sabers encountered in museum and private collections today tend to date from the 17th to 19th centuries, this article will focus on that period.

Officers of the Qing dynasty (1644-1912) were expected to adhere to certain regulations regarding size, materials, and decoration of their sabers. At the same time, they enjoyed considerable freedom in the choice of their blades. This resulted in a fairly large variety of blade types, none of which are mentioned specifically because they were not regulated.

A peidao / yaodao didn't even need to be curved, some were straight. As long as they were single edged for most of their length, and meant to be worn on the hip, they classify as peidao / yaodao. Given the wealth of types out there, there is a need to further classify the sub-types.

So where are these saber typologies? There were probably lists of saber types in use workshops making them, but per my current knowledge, none have survived. As much as I'd like to work exclusively from solid period sources, in the case of Chinese saber typology we are often left to the terminology used by advanced collectors.

Some of these may be accurate oral transmissions of the old terms, while others may be neologisms that enjoy various degrees of acceptance. In some cases, names seem to be confirmed by details found on some of the blades.

I have made an overview of the most common blade curvatures encountered on Chinese sabers. I depicted them with hilt styles commonly found on them, but for none of these the hilt is the defining factor. 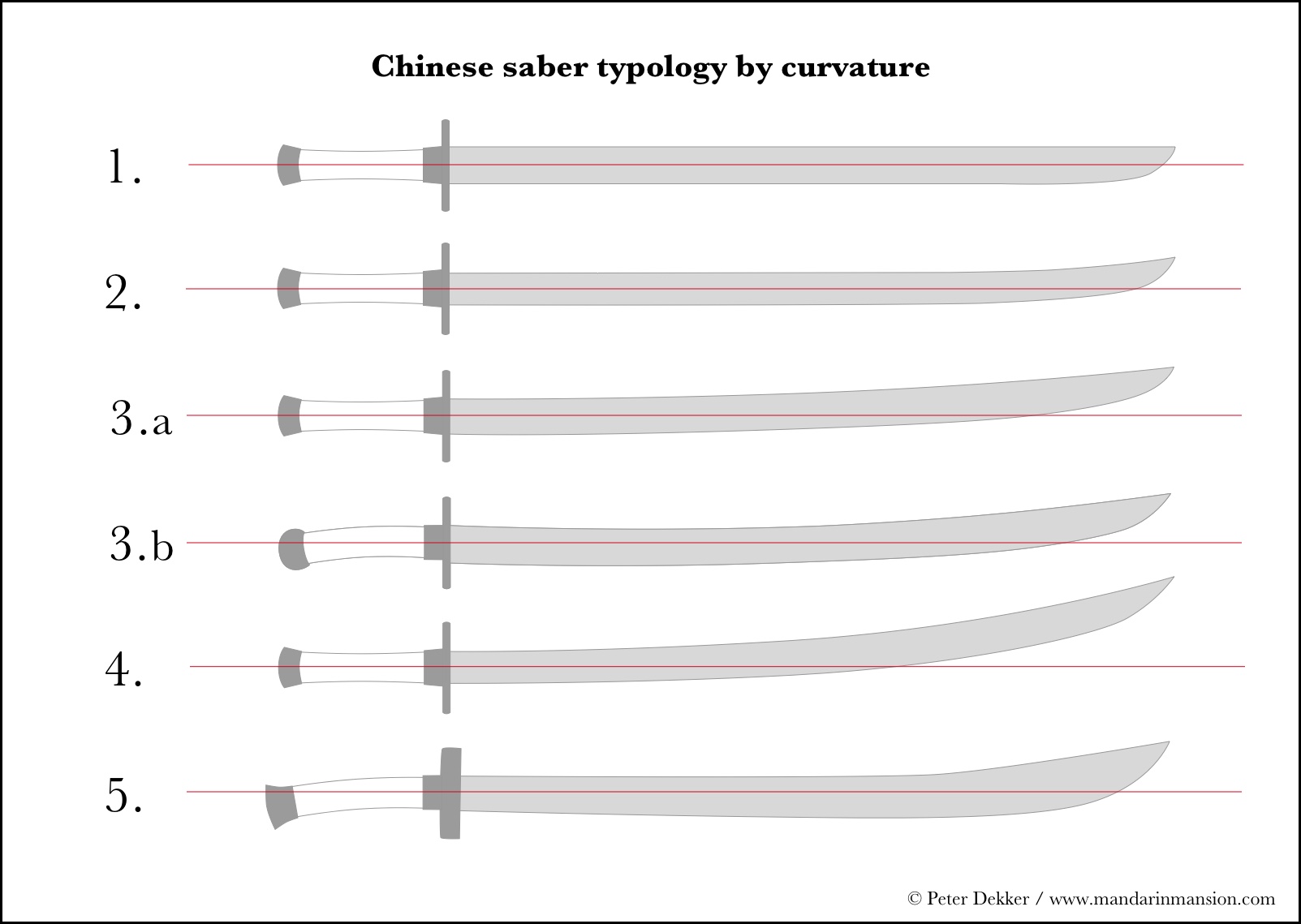 Curvature: None. A straight back and parallel edge, the edge only turning up to meet the spine at its very tip.
Origins of Chinese term: Collector's jargon

Technically not a saber, because it is straight. But, the Chinese dao (刀), can refer to any single-edged sword or tool, including straight types and a Qing officer could choose to wear one of these instead of the more common curved saber.

The zhíbèidāo was the standard military sidearm until the Mongols invaded with their curved sabers, replacing the native styles everywhere but the fringes of the empire. As such, the zhíbèidāo survived primarily among ethnic minorities such as the Tibetans and Yi of the west and southwest of the country. One rarely finds zhíbèidāo in typical Qing military fittings, but it does occur from time to time.

A Chinese zhibeidao of the 19th century, probably from Yunnan.

Curvature: Straight until about the last quarter of the blade, then sweeping up gently.
Origins of Chinese term: Yànmáodāo is collector's jargon / yànlíngdāo appears in classic literature

The yànmáodāo / yànlíngdāo is a transitional phase between the zhíbèidāo and sabers curved over their entire length that probably originated in the Song dynasty. Their use extended into the mid-Qing dynasty.

They are rarely encountered on the market today, most examples appear to date from the 18th century after which the style seemed to have fallen out of fashion. Also see Philip Tom's article Of Geese and Willows.

Curvature: A gentle curve along most of the blade
Origins of Chinese term: Collector's jargon

The liǔyèdāo is the most common form of Chinese saber of the Ming and Qing dynasties. They come in many shapes and sizes: Some are nearly straight with only a very gentle curve, while others are more deeply curved. They come in narrow and wide varieties and display a large variety in blade design, with different configurations of grooves, bevels, and blade profiles. 3.a illustrates a classic 18th-century style, while 3.b illustrates a classic mid-19th-century military style.

According to Jin Yiming's "Single Defense Saber" (1935), these sabers can be called miaodao or "sprout saber", referring to the narrow, curved blade shape resembling a sprout. Today, this name will cause confusion because it is now common to only call the large two-handed version of the miaodao by that name.

The piāndāo is one of the rarest types of Chinese sabers. With their deep curve, they are most suited for close range cutting. They were primarily used by specialized shield bearing units of the Ming and Qing dynasties. Determining whether a saber is a piāndāo or a liuyedāo is best done when having the saber "in hand": liuyedāo feel like the want to cut with some more percussive force while on a piāndāo the edge curves away so far from the center line that it rather slices.

Curvature: Fairly straight to moderately curved from the base, leading to a deep curve near the wider tip section
Origins of Chinese term: Collector's and martial artist's jargon

They usually have wide but relatively thin blades with a widened upward sweeping tip. This design is optimized for cutting softer, unprotected targets, explaining their popularity among rebels and civilians in a time where firearms rendered armor obsolete.

This is the only non-military saber in this article. The niúwěidāo originated somewhere in the 19th century and found widespread use among rebels and martial artists. After the fall of the Qing, the Chinese military switched completely to European style military sabers. The niúwěidāo was the only traditional Chinese saber design that remained in use after the fall of the Qing.

Widely adopted by martial artist heroes of the republic, it became known as the archetypical Chinese saber while all older designs were gradually forgotten.

A typical oxtail saber. This example is dated 1895 by a marking on its spine.

2. Types based on blade profile

The following diagram illustrates some basic varieties to mainly the liǔyèdāo and yànmáodāo / yànlíngdāo saber types. I have kept to the archetypical profiles of these, in reality you can expect to encounter many varieties on these themes, some of which remain without classification. I drew them all in liǔyèdāo form with a gentle curvature, but many of these profiles are also encountered on yànmáodāo. Added for comparison purposes, the standard liǔyèdāo. Depicted in its archetypical form of most of the 17th and 18th centuries.

Profile: Both edge and spine curve towards a tip
Origins of Chinese term: Collector's jargon

The exact meaning of yànmáodāo and whether the term is historical remains disputed. Apart from being a type of blade curvature as discussed above, the term is described by some Chinese collectors as a saber with a profile where both back and edge of the saber curve towards the point at the end. It supposedly resembles the tip of the tail feather of a wild goose.1

An old and rare form of blade that seems to have originated in the Song dynasty. It is seen on a substantial amount of Ming artwork but seems to have lost its popularity around the Ming / Qing transition period. Most remaining examples date from the late Ming to early Qing with occasionally a later Qing occurrence.

The "clipped" contour on the back of the tip section can be straight like on my drawing, but also slightly concave, with a scalloped edge, or serrated edge. Some of the scalloped edged ones almost seem to resemble the ends of the feathers on a bird's wing tip, lending some credibility to the term.

An 18th-century yanchidao with later mounts

Profile: Narrow blade with a peaked widening at the back, near the tip
BCollector's jargon / blade decor

Another old form, most examples appear to date from the late Ming to very early Qing. The main difference with the yànchìdāo described above is that the peak at the back of the blade is further from the very tip and the contour from peak to tip is always concave. Some examples have eyes and gills engraved on the tip sections, which seem to confirm the legitimacy of the term.

Profile: Narrow blade with a raised Turkic style backedge
Origins of Chinese term: We still have no good Chinese term for this type of saber.

This type is characterized by a raised backedge in a style commonly seen on Turkic sabers, called a yelman. It is a remnant from the nomadic sabers introduced into China by the Mongols during their invasions that lead to the Yuan dynasty. Like the previous two types, it is an old style. Most remaining examples seem to date from the late Ming to early Qing.

The term wōdāo is used in period texts as a two-handed saber of Japanese-inspired form. Yāodāo refers to a smaller version meant to be worn at the waist.1

Chinese sabers styled after Japanese sabers were very popular in China from the 14th to late 18th centuries.2 In Western collectors circles, we call these "sabers with ridged cross-section" or "Japanese styled" saber. Nowadays, Chinese collectors tend to call these qijiadao or "Qi family sabers" after general Qi Jiguang. He famously ordered his workshops to reproduce these, after being impressed by the quality and effectiveness of the large two-handed Japanese sabers he fought against. Qi Jiguang was certainly not the first, nor the last, to order Chinese sabers made inspired by the Japanese style: There are Ming records from as early as 1380 that speak of the manufacture of tens of thousands of so-called wogundao (倭滾刀), whose name implies they are Japanese styled sabers.

Notes
1 These terms are found in the Qing 皇朝利器圖式 and 欽定軍器則例 respectively.
2 For an interesting discourse on late Ming dynasty sword collection, see: Kathleen Ryor: "Wen and Wu in Elite Cultural Practices during the Late Ming" published as part of a series of essays in Military Culture in Imperial China, edited by Nicola Di Cosmo. Harvard University Press, 2011.
3 References to such swords appear in the 欽定續文獻通考 and 明會典. Thanks to 陳兆偉 for pointing these references out to me.br /> 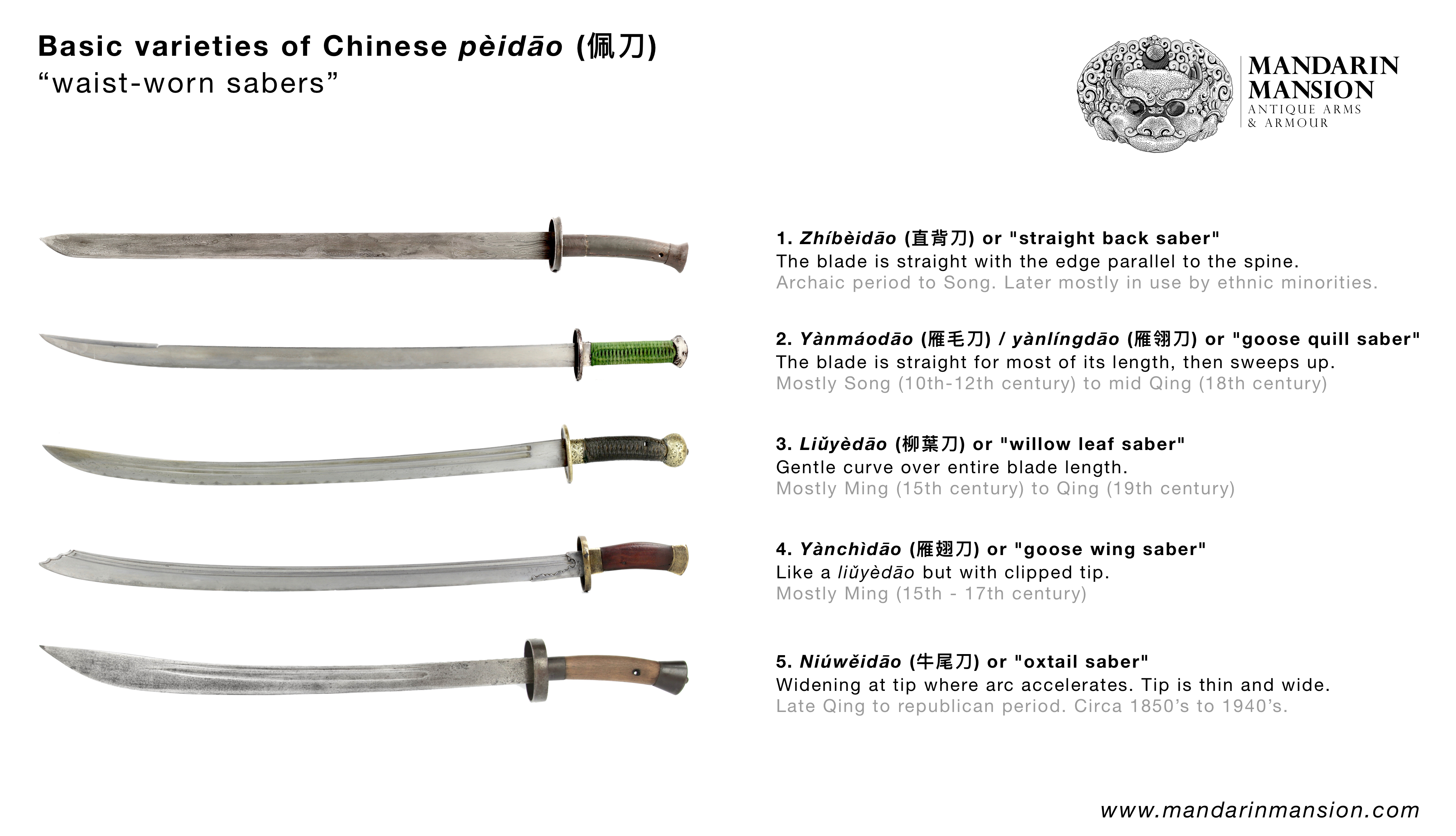