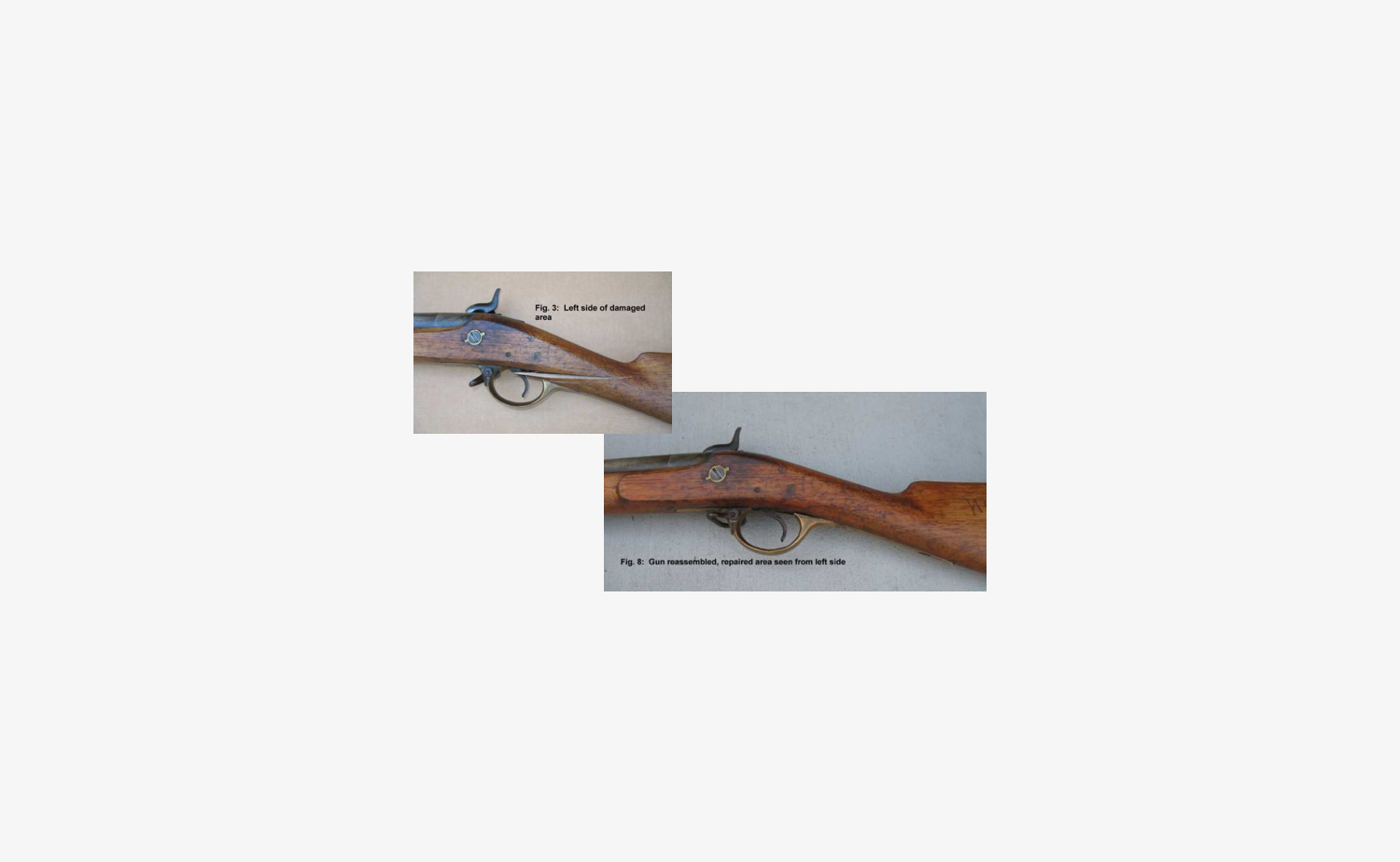 (This is a very old article so the image resolution is somewhat low.)

Every collectible arms dealer occasionally has a problem with a rifle or shotgun that comes in with a stock that’s cracked or completely broken at the wrist, that narrow and vulnerable area between the butt and the rear of the action or breech. You see antique guns with period repairs which vary from skillful to picturesque. Stocks also break or split in shipment because they were improperly packed, or perhaps after a postal worker had practiced the “caber toss” with the carton to prepare for an upcoming Highland Games..

This is a “broke in shipment” case: a partial break (I suppose the medical profession would call this a greenstick fracture) between the lockplate and trigger guard of an Indian or Nepali knockoff of a Brunswick percussion rifle. The wood resembles walnut but is rather soft and weak to begin with, and the entire gun is a smoothbore, fixed-sight downmarket version of what should otherwise be a well-designed and crafted British service rifle. Despite its relative lack of good workmanship, it’s a historically interesting piece with loads of Nepali markings and an undoubtable association with the Gurkhas.

Figs. 1-3 show the piece from both sides, as received. Not only was the wood damaged, but the relatively flimsy brass trigger guard tangs had bent as well. Repair was made somewhat easier by the fact that the break occurred recently and the fractured surfaces were still clean -- no oil or gunk had gotten inside. An exception was a small crack under the lockplate which looked old because the wood inside was darkened. For good measure, the area was cleaned from the inside with dental picks and acetone swabs, being 2 careful not to remove any actual wood. Had this been an old crack, considerable time would have been spent degreasing all surfaces of the break. Next, a method had to be devised to clamp the stock so that the cracks close completely under pressure. Fig. 4 shows the setup I devised. This was a relatively easy case, since the break was generally along a vertical plane. By elevating the stock on wood blocks atop the bench, as shown, the downward pressure (at 90 degrees to the benchtop) exerted by the cabinetmakers’ clamps did the trick. 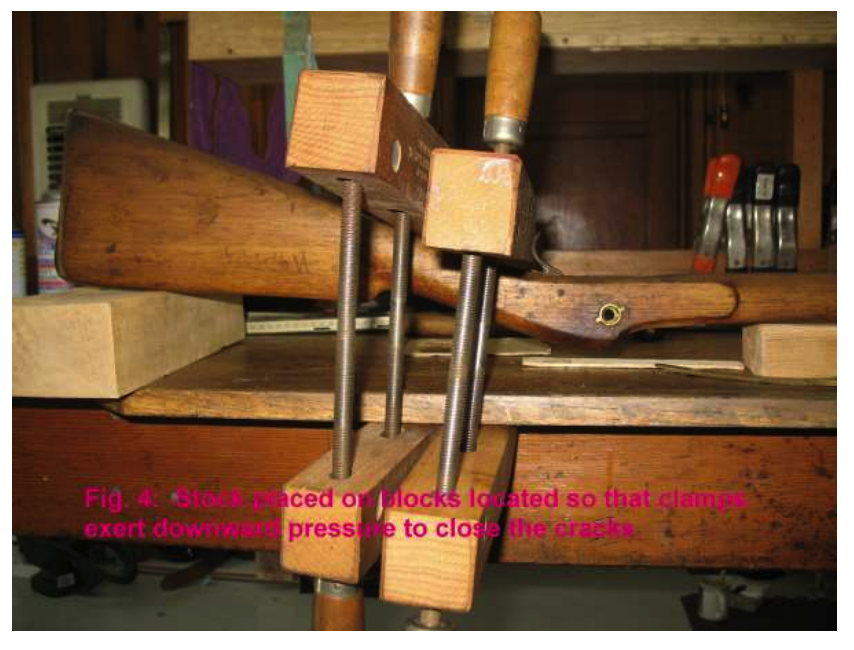 Some jobs are not so simple. A break generally occurs along the lines of stress applied to the stock. In this case, it was along a vertical plane. If the force is applied from another angle so that the stock breaks on a diagonal or lateral plane, a different clamping scheme is needed. Each case warrants a different approach, which has to be thought out and actually tried before you even think of reaching for the glue bottle. It sometimes involves fashioning specially shaped and padded “cradles” to support the stock at a certain angle on the bench. Sometimes you need to work incrementally in the case of multiple breaks or detached fragments.

A useful trick for irregular surfaces such as buttstocks is the “Spanish windlass”. This simple clamping device consists of an endless loop of heavy cord that you slip over the parts to be joined, and tighten by inserting a short stick and twisting until the joint is squeezed perfectly tight. The tightening bar can be secured by a bungee cord or similar means. For a wrist break, a loop that’s 2 – 3 times the diameter of the wrist should work well. You may need more than one windlass to apply even pressure all along the affected area. You can use the wooden cabinetmakers’ clamps seen in the photo for auxiliary pressure on the comb area of the stock since they are adjustable to conform to tapered surfaces. I repeat: experiment and decide on the exact method you will use before applying any glue!

Please refer to my previous article on the Dreyse stock repair for a discussion of adhesives. Be sure to get the glue into the very bottom of the cracked areas; it’s better to have to wipe off the excess that oozes out than end up with a joint that’s partially 3 “starved” of adhesive. After the glue dries, the joint can be cleaned up with penknife, scrapers, and fine sandpaper. An application of stain and your favorite stock finish will wrap things up quite nicely. In this case, matching the color of the surrounding wood was easy -- the common Birchwood Casey walnut stain turned out to be the cat’s meow. The stained area was treated to 3 coats of linseed oil, rubbing after each application had been allowed to sit overnight. Birchwood Casey gunstock wax, or better yet, the triedand-true Johnson’s paste-type furniture wax still sold in all hardware stores, was the final coating.

The trigger guard tangs were distorted by the forces which broke the wood, so I had to reshape to fit the pre-existing channel in the stock now that it has been properly rejoined. Fig. 5 shows the trigger guard in one of the bending jigs I normally use to straighten bent sword blades. The brass was sufficiently thin and soft that hand pressure was sufficient to move the metal one way or another. For more resilient objects, these jigs, clamped in a heavy bench vise, can be used in concert with the “bending forks” seen at the bottom of the next illustration. Their long handles give plenty of leverage to budge things like tweaked ramrods and kinked bayonets but make sure your bench is heavy enough or is bolted to the floor. 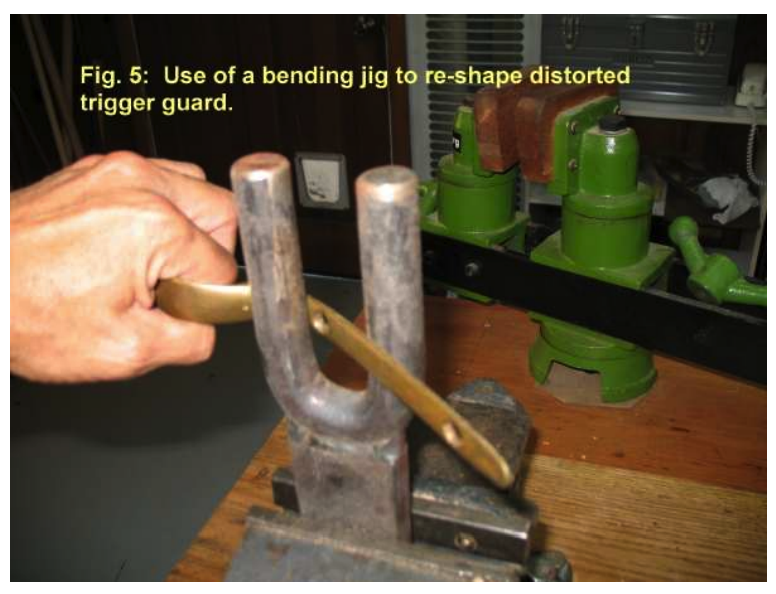 Fig. 6 shows an assortment of tools used for straightening bent metal parts. Don’t expect to find these at Home Depot or your neighborhood Ace Hardware, they all need to be custom-made. In principle, they are pretty simple things, and the yardstick gives an idea of their size. A competent blacksmith or welder should be able to fabricate these easily; mine were made by colleagues who are sword smiths. At the back of the picture is an anvil made from a section of rail, plus a couple of hammers. 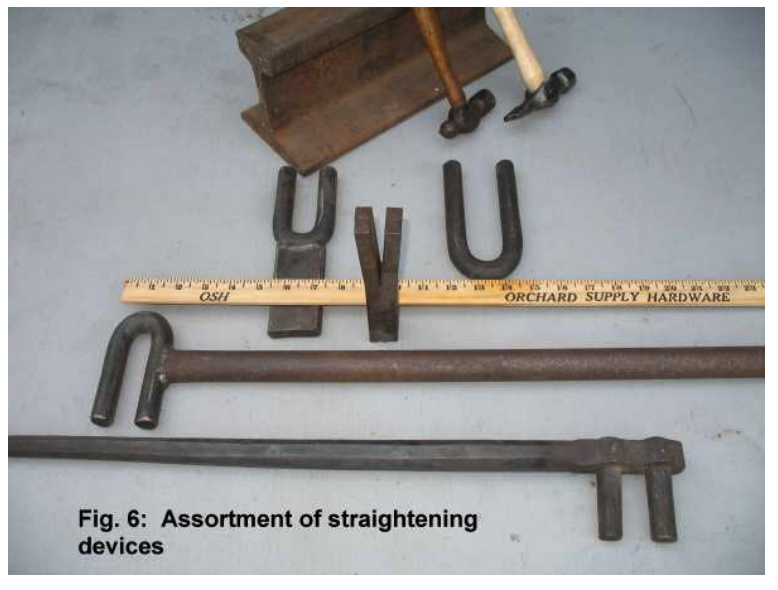 Figs. 7 and 8 show the completed job, before and after reassembly. 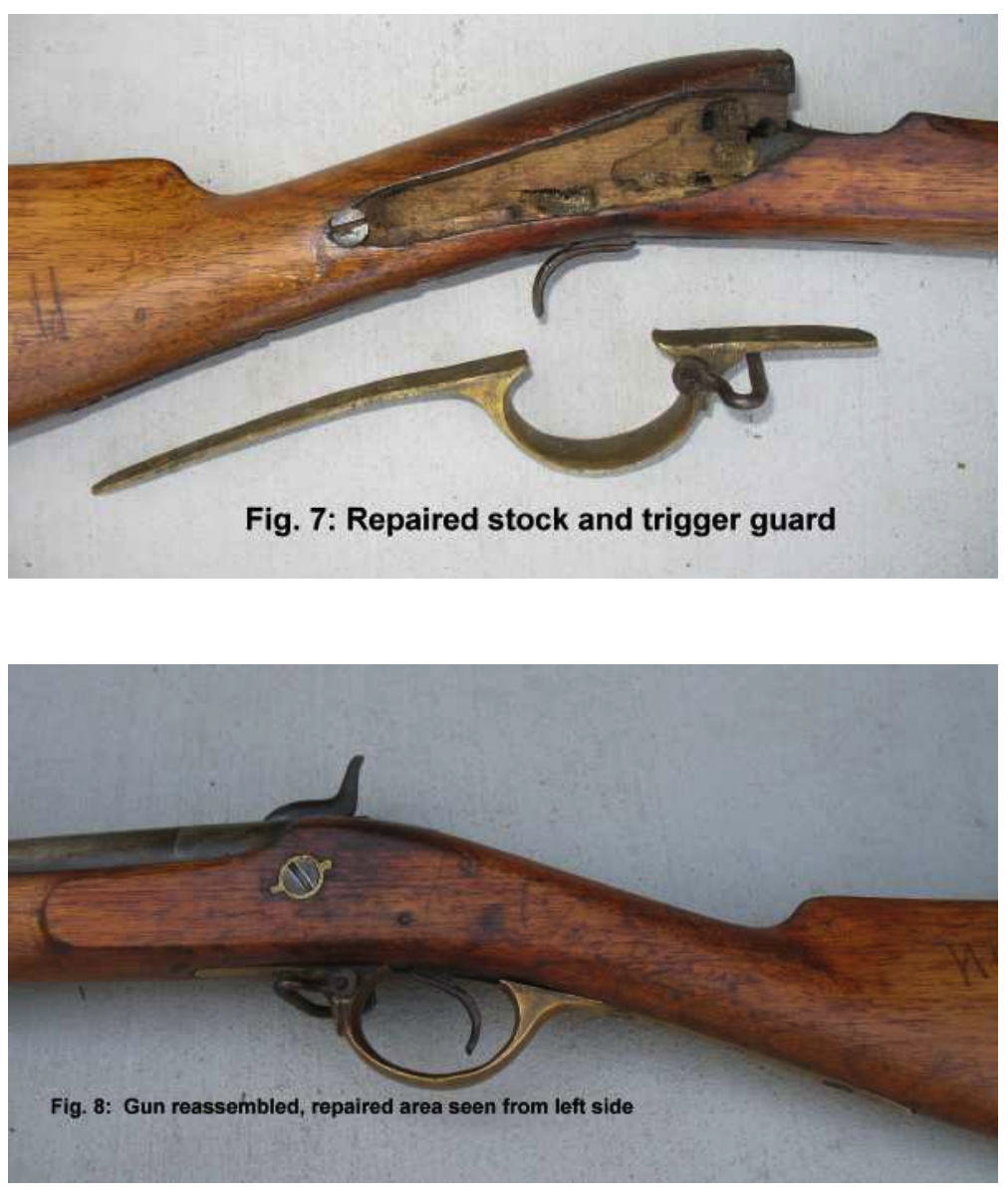 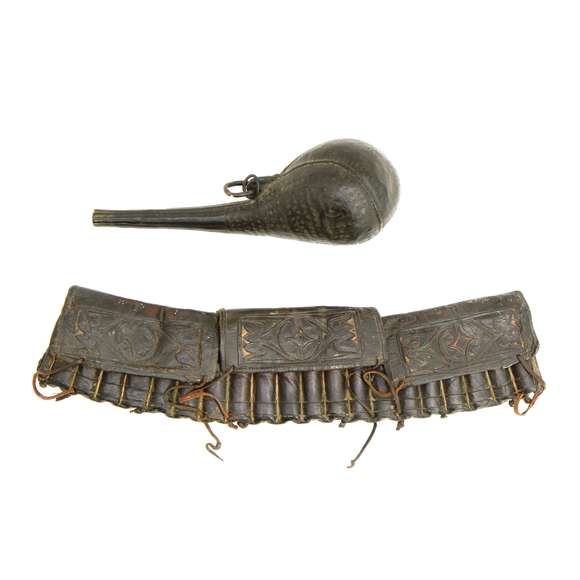