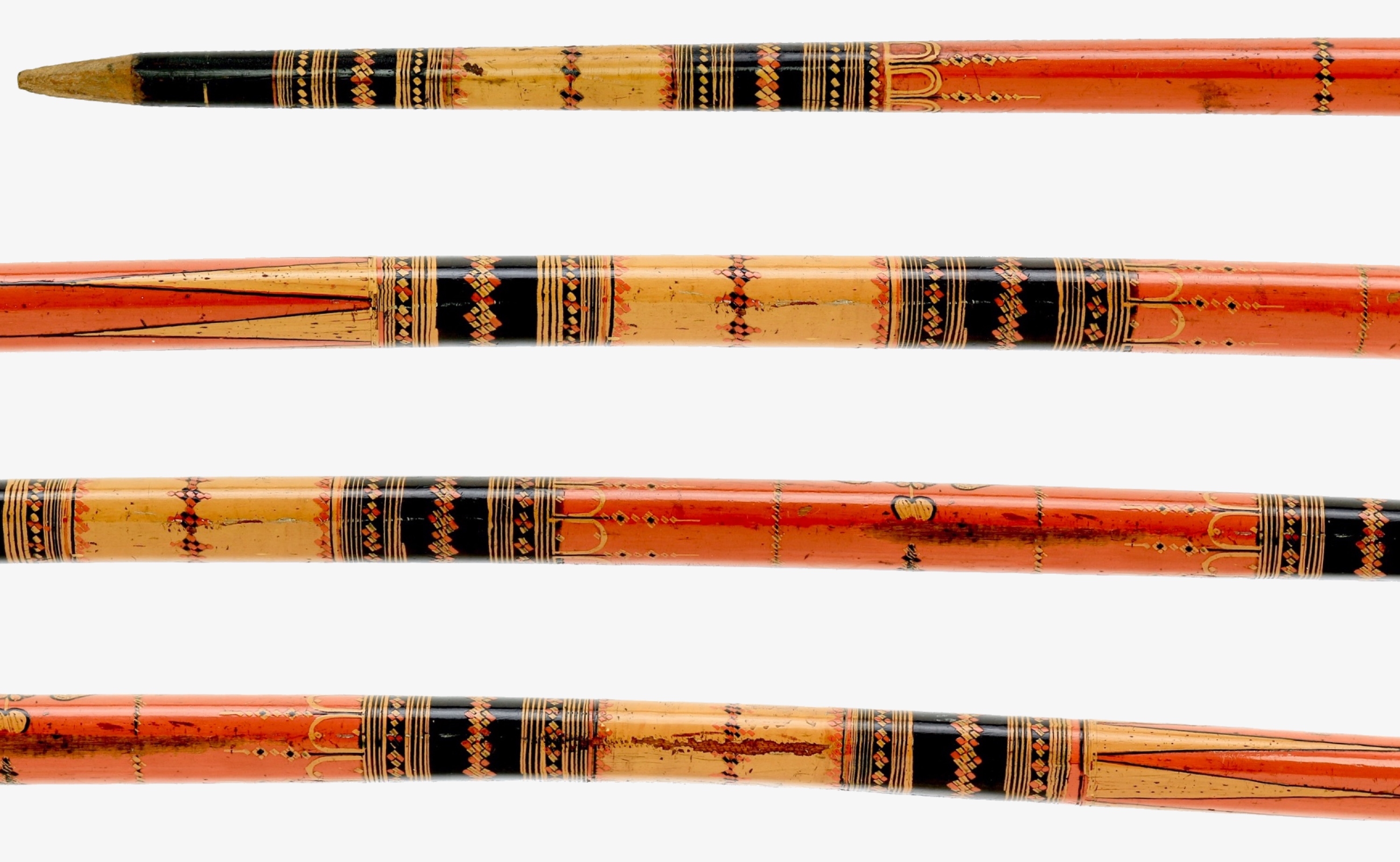 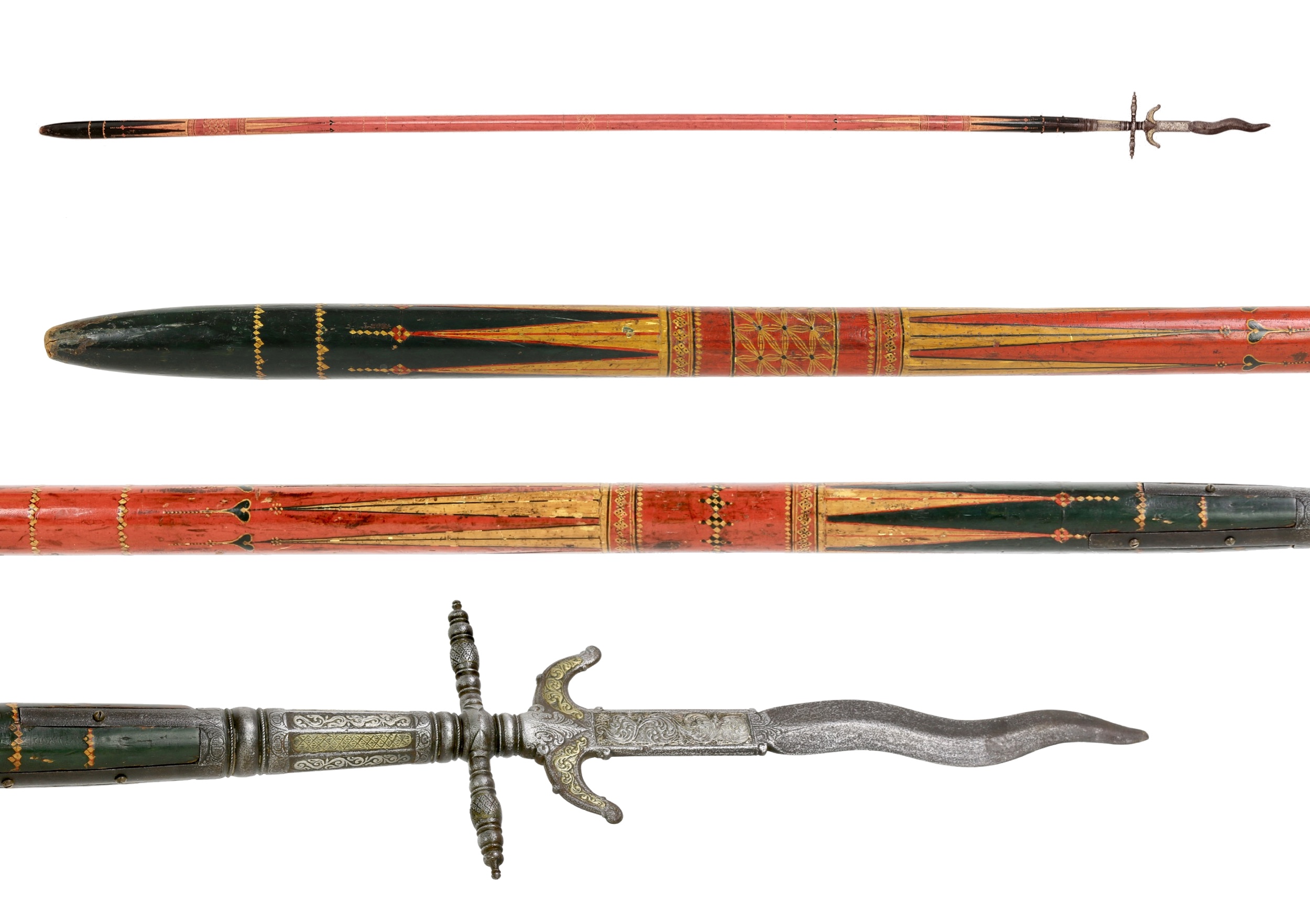 Sinhalese lacquerwork on a fine Sinhalese patisthānaya from the King's Four Workshops.
Sold by Mandarin Mansion in 2019.

The Sri Lankan lacquer would be made from the secretions of two types of insects, Tachardia albizzie and the Tachardia conchiferata. The latter is rarer and produced a brighter, clearer lacquer. Small quantities of Indian lacquer were also imported.2

As for pigments, four colors were used:

Contrary to lacquer work in most cultures, the Sinhalese methods of applying decorative lacquer did not involve a brush.

In this type of lacquer work, the solid lac is pressed to the wooden artifact while spinning on a lathe. The friction heats and softens the lacquer, applying it to the object. This type of work is confined to only items that can be turned on a lathe, and produced concentric colored bands.

The work from Hapuvida, also known as Mātale work, is the most distinctive. It is referred to as niyapoten vẹḍa or "finger-nail work".

The elaborate decorative work would be done by warming a lump of lacquer and drawing it out. The craftsman would typically wind the string around his knee a couple of times for it to cool. The staff would now be warmed gently, continuously turned by an assistant, usually a small boy. The narrow band of lacquer would then be applied to the staff by pressure, and the pattern created as the staff revolved. The end would be nipped off with the nail of thumb or finger. As a consequence, lines have straight ends and all "dots" in this kind of work are angular in shape. After completion of the motif, the staff is then warmed again and smoothed with the leaf.4

For Sinhalese craftsmen of the Kingdom of Kandy, their art was not so much about coming up with new designs as a way to express themselves. Instead, they aimed to execute known designs in order to express their shared culture. As a result, Sinhalese art presents us with a fairly limited number of decorative designs and motifs. The delight of the appreciation of Sinhalese art lies in the technical excellence of execution of time-tested motifs.

"The lac-work is usually limited to a small number of good, conventional patterns admirably adapted to the nature of the material; when, as occasionally happens, these are departed from, and an endeavour is made to represent some more ambitious subject, such as an elephant or lion (as occasionally on book covers), the result is necessarily not quite so satisfactory. Most of the work, however, is from a decorative point of view thoroughly sound, and the colors pleasing."

Here follows an overview of some common motifs seen in Sinhalese Mātale lacquer work, as described by Coomaraswamy.5

I used photos of antique artifacts I've studied where possible. 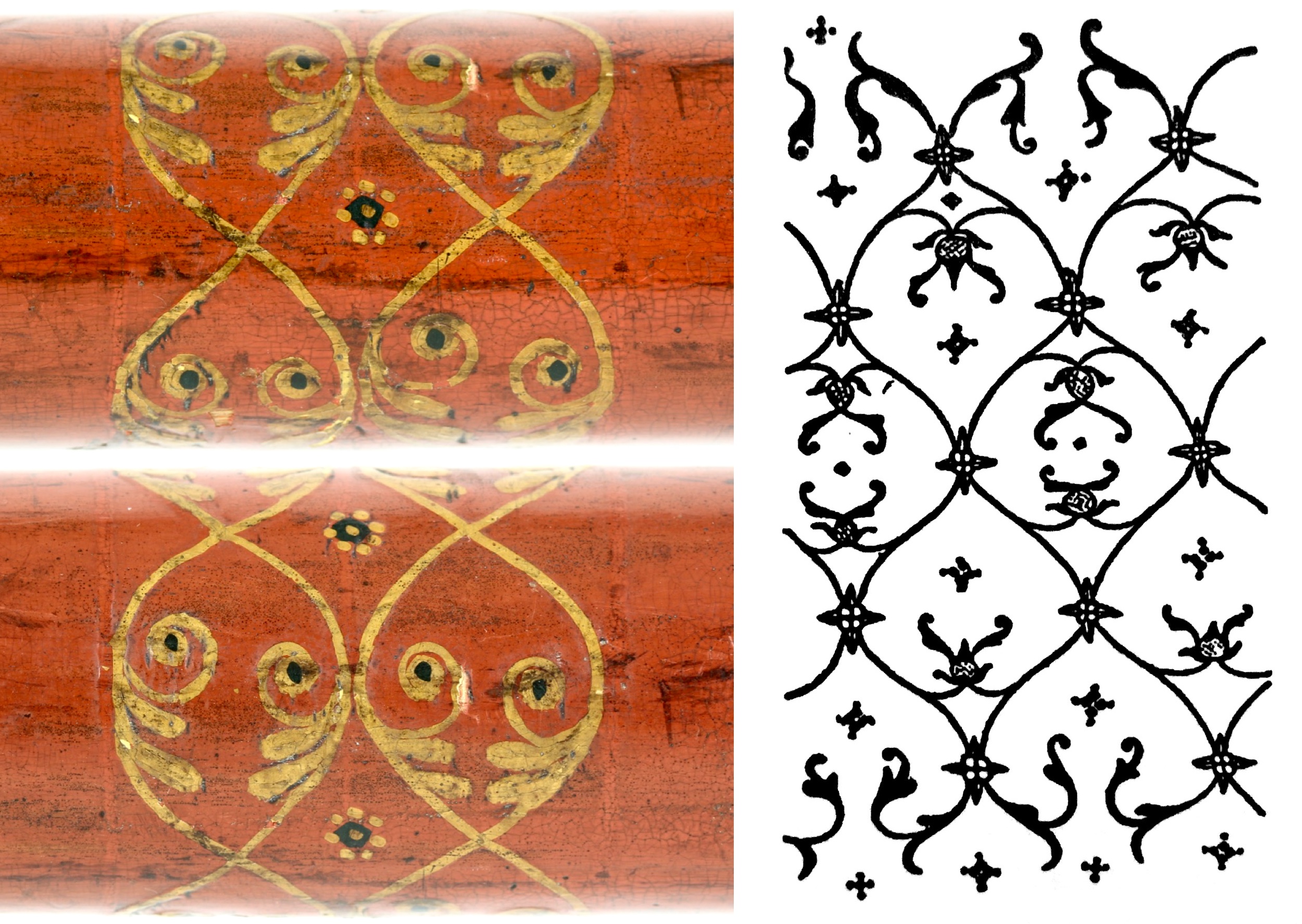 (Right: On a patisthānaya sold here in 2019. Left: From a lacquered spear shaft in the Colombo museum.)

Elongated isosceles triangles, a staple of Sinhalese lacquerwork.
Sometimes the tips have bō-koḷa. 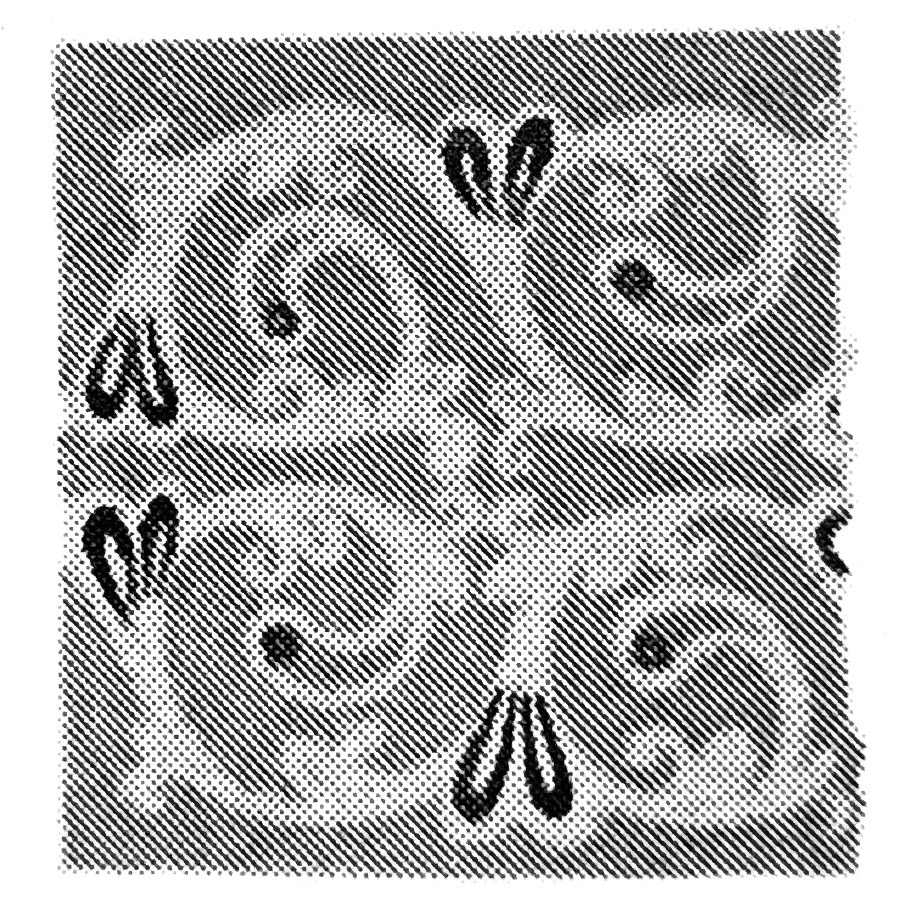 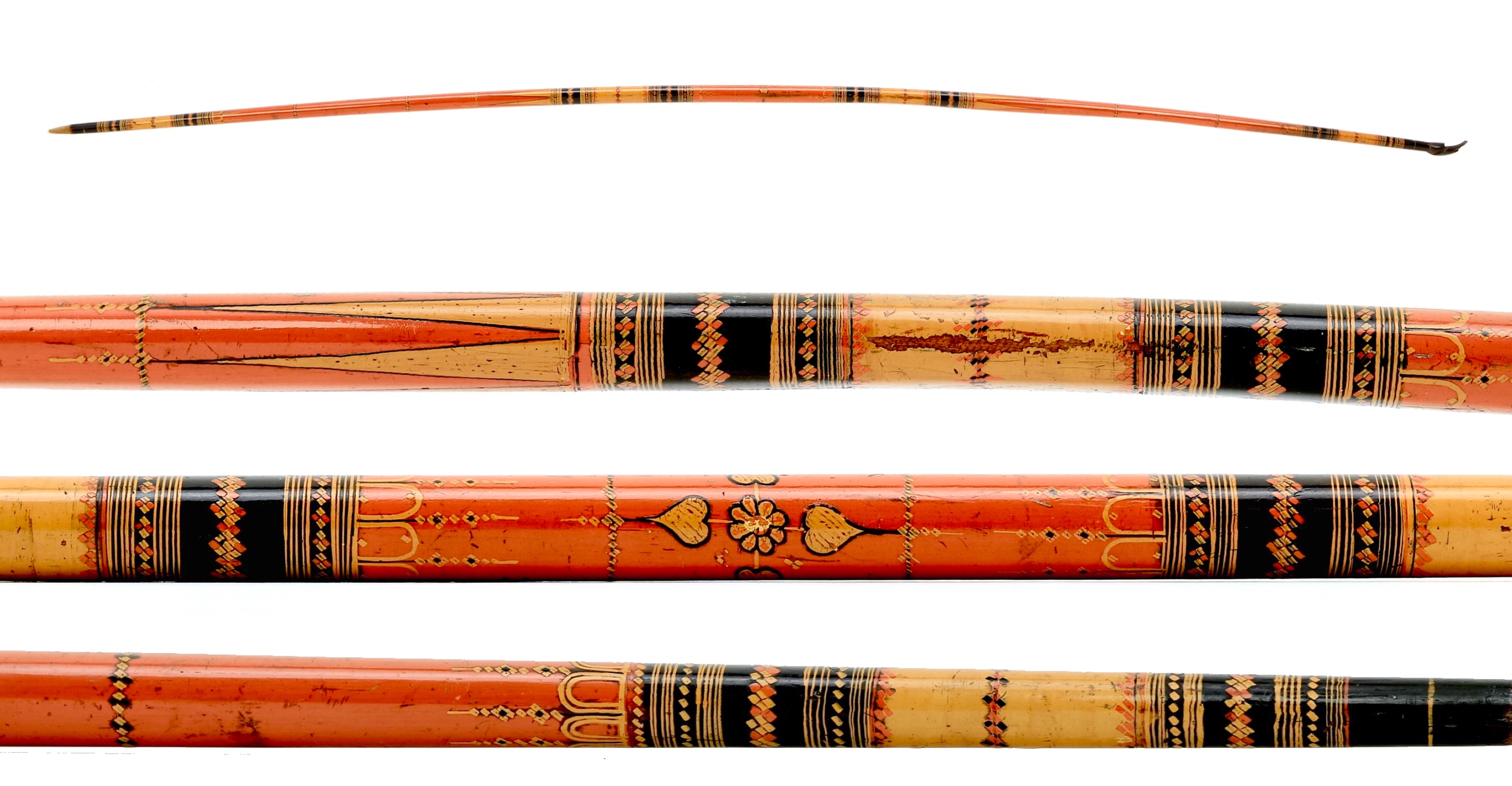 Sinhalese lacquerwork on a fine Sinhalese bow from the King's Four Workshops.
Sold at Mandarin Mansion in 2020.