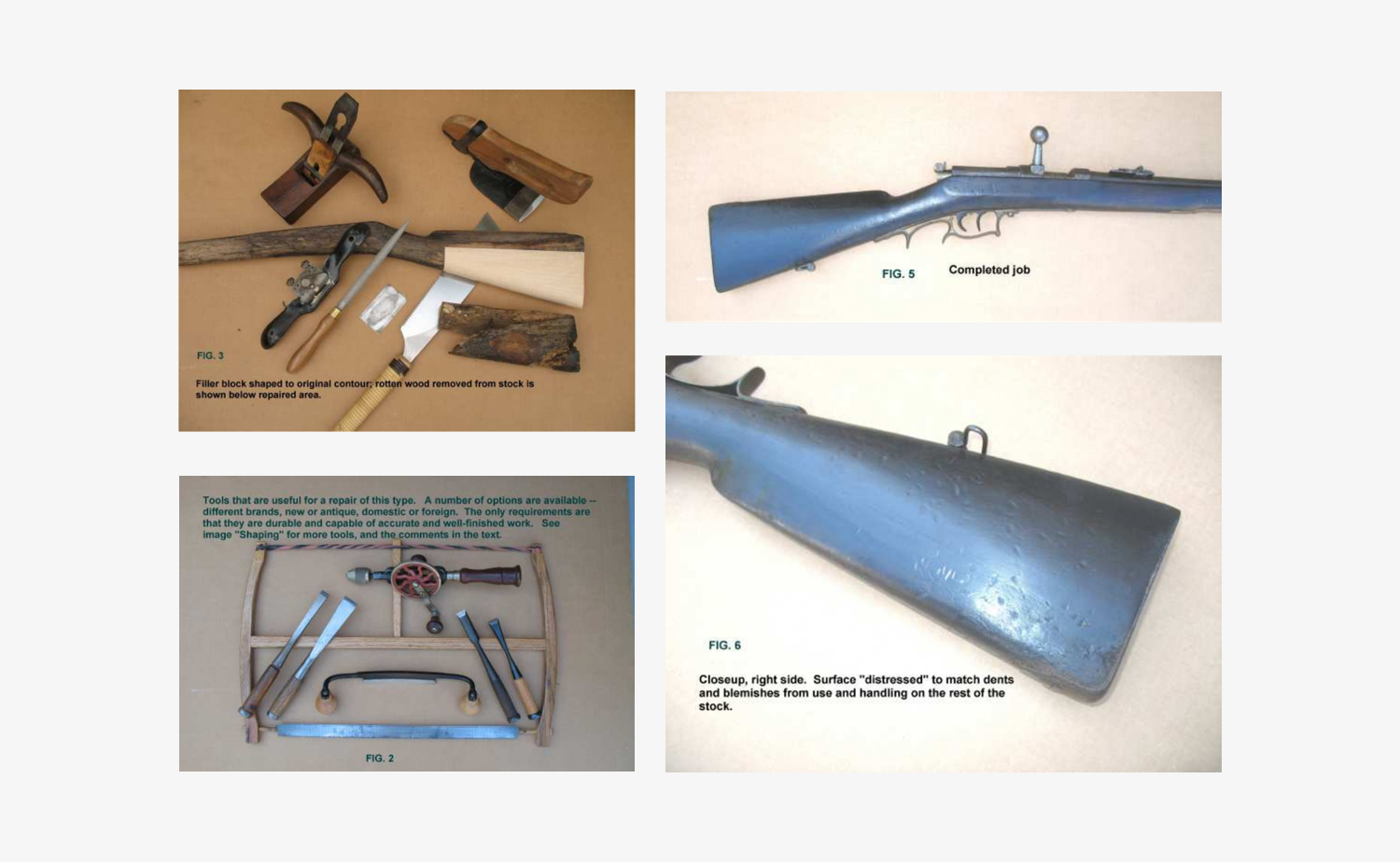 Over the past few years, local collectors and antiques dealers have brought in a number of different variations of the Prussian Dreyse needle-fire rifle for various repair jobs. Not that these are commonly-encountered guns in our era, but certain quirks about the way they were made help keep restorers in business.

They are interesting rifles, and are a truly ground-breaking development in the history of the bolt-action, but in terms of workmanship and materials, they are a bit of a disappointment to those who associate German military arms with Mercedes automobiles. Mechanical tolerances are on the loose side, fit and finish are only adequate at best, and many operating parts seem to be crafted of iron as opposed to the ordnance steel that we’re used to. I’ve handled a couple of mint unissued ones and they’re just fine, but these guns don’t seem to wear as well through hard service as their French and British counterparts of the period – or the Mausers that replaced them.

By far the most frequent problem with Dreyses is damaged stocks. There’s something about the way the stock is designed that makes it prone to breaking at the action or wrist. The rather inferior grade of lumber found on many examples doesn’t help, either. The example here is one of the biggest Dreyse stock fixes I’ve done: about 2/3 of the buttstock was ravaged by dry rot and powder-post beetle infestation, then roughly patched up with a plastic wood filler. Eeesh!

I wasn’t bright enough to take a pic of the stock before I started work, but in Fig. 3 “Shaping” you can see the hunk of rotted wood, already detached from the gun, in the lower right corner. In this case, the buttplate screws were frozen in place, making the job even more enjoyable. Fig. 1 summarizes the basic approach -- saw out the infected area and precisely joint and fit a block of new wood to replace it. The “patient” is prepared for surgery by disassembly and meticulous cleaning of the stock to remove as much accumulated oil and grime as possible. Failure to do this will make finishing very difficult. When cutting the filler block, care has to be taken to match the wood and the direction of grain as best as possible. The pic shows the filler block glued in place, before being shaped to final contour. It’s essential to allow enough length at the rear to accommodate the curve of the buttplate. Failure to account for this may result in “daylight” visible between stock and buttplate when it’s screwed back on.

Fig. 2 gives you an idea of the assortment of tools needed for the job. Except where table- and band-saws are absolute time-savers in the rough stages of the work, I prefer to do everything else by hand. Sawing out the damaged area required several longitudinal cuts – it’s hard to determine from the outside how bad the rot really is and if you want to keep as much original wood as possible, several “exploratory” passes with the saw should be done in order to see what’s going on inside.

There are any number of saws that will do the job providing they are sharp and straight. In the pic is a frame-saw from Portugal (similar ones using German blades are made by a few artisanal tool-makers in the US). I like this type of saw because the blade operates under considerable tension and with minimal friction so that it cuts accurately and effortlessly. The mating surfaces of the filler block were trued-up with a block plane (see Fig. 3, “Shaping”, top) and the cutout area on the stock were dressed up with the chisels you see here in Fig. 2. I prefer Oriental planes and chisels because their blades are tempered harder than Western ones and being laminated, are less brittle. The wooden blocks of such planes (the one in the pic is antique Chinese but the same style but with non-lamellar blade is also made by an Australian firm as well) are also lighter and more responsive in the hands than the cast-iron Western tools. The chisels in the pic are part of a large assortment I have, mostly Chinese and Japanese, the majority made well back in the last century. As you can see I prefer the now hard-to-find triangular blade styles which produce very clean dovetail cuts. A straightedge and engineer’s square (not shown in pics) are necessary to ensure accurate joints. 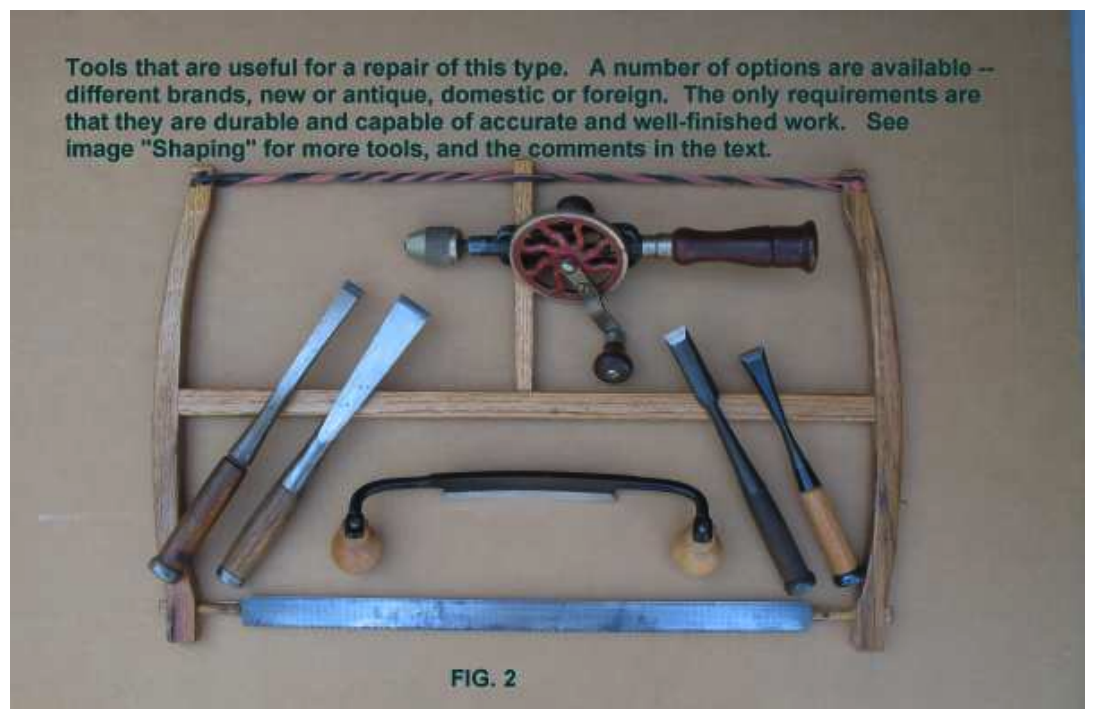 For joints at structurally-sensitive areas such as the wrist, or for stocks on guns that will be shot, internal pinning and high-strength epoxy-type adhesives are de rigeur. For guns that are considered collectors’ items only, or for areas that are not affected by recoil, a high grade wood glue is adequate. For these applications I’ve had success with “Titebond” glues, since they are strong and since they don’t darken the wood at the joint, it helps make the repaired area less noticeable on medium- to lighter-colored woods.

After the glue sets comes the shaping process -- this is fun because you’re just “over the hump” and can see the finish line ahead. Fig. 3 shows the filler block shaped to final contour, all by hand. Using a variety of tools like a golfer pulls clubs out of his bag, the work can proceed remarkably quickly. You don’t need machines! Speaking generally, I typically go in stages, selecting tools accordingly.

A. “Hogging out” using an adze (Fig. 3, top right). It removes material fast and can’t be beat for basic shaping of irregular or curved surfaces. I like the ergonomics of a type called an enxó de mão from Portugal which is what you see in the pic -- you see these on EBay once in awhile. Alternatively, the smaller north European style adzes by Iltis Oxhead (Germany) and Granfors (Sweden) are wonderful tools but they are pricey. Also, I’ve heard that at least one custom toolmaker in the US has revived the ancient Hawaiian adze, but using a steel blade.

B. Intermediate smoothing with a drawknife (see Fig. 2, center). For stock work, one with a curved blade (cutting convex surfaces) is better than the common straight blade.. These tools are getting hard to find, the one I use is from a firm in France, one of few makers left offering the curved type.

C. Fine shaping to match contours of original stock with a spokeshave (Fig. 3 lower left). Mine is the trusty British-made Stanley 151, which I’ve used for about 30 years. Off-the-shelf it’s a pretty crude and basic tool, but it’s inexpensive, indestructible, and easy to upgrade with a “tuneup” and after-market thick HSS blades. During all of the shaping process, frequent checking with the straightedge will help avoid any bulges and dips in the work.

D. Final surface smoothing is done with a scraper (the little rectangular piece of steel in Fig. 3). Use your edge tools carefully and in proper succession, and you don’t need to do much sanding at all! 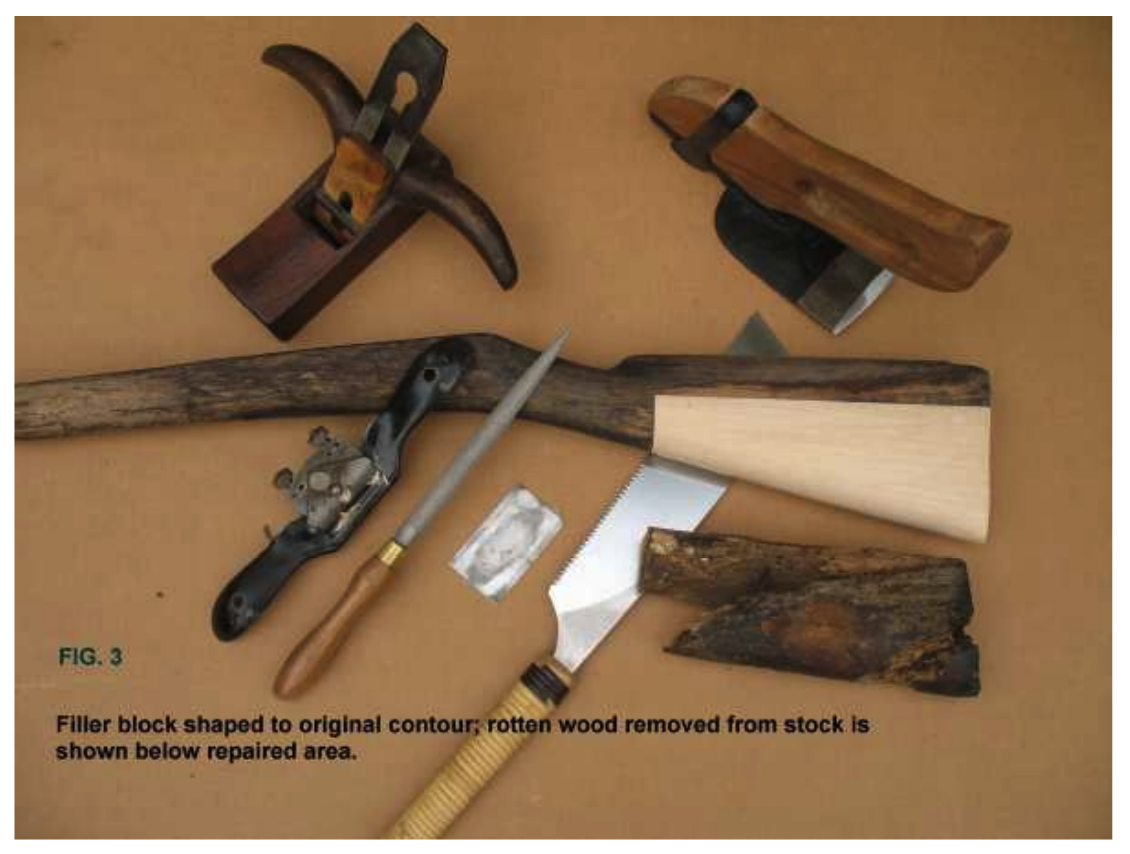 E. Don’t forget that buttplate! A rasp is indespensible for cutting across the end-grain so that the plate fits precisely. The machine-made Nicholson wood rasps made in USA do the job but they cut roughly and you need to be careful about “tear outs” on the edges of your work. In the pic is a French-made Auriou rasp, with hand-cut teeth that don’t tear-out the grain, yet eat through the hardest woods with ease. There is an innovative and much more affordable rasp made from sections of saw blade in a single bar, produced by the Shinto Co. of Japan, which is also excellent.

Now, for minor fitting. In this case, the filler block extends forward enough so that part of it goes under the trigger plate/trigger guard assembly. In Fig. 4, you can see a small half-moon cut, made with a gouge and narrow “bullnose” chisel (not shown in pics) that inlets these metal parts flush with the surrounding wood. It’s also necessary to drill the pilot holes for the lower sling swivel (the original had vanished but the customer provided an antique of suitable appearance that anchored with a single screw) and the 5 buttplate screws.

The “eggbeater” hand drill (Fig. 2) did the job neatly and quickly enough. An important thing to remember that woodscrews for guns are tapered, and it’s best to drill the pilot holes using a TAPERED or STEPPED bit of proper size. Choosing just one normal drill bit won’t do it – either it’ll be too small and the screw might bind when you’ve got it 2/3 home, or it’ll be oversized and the wood will not grab the bottom threads properly.

After the sawdust settles and the surfaces all faired-out and blended seamlessly, it’s time for finishing: “whiskering” and final sanding, staining, filling, and the oil and wax finishes. Everybody seems to have their own approach to these processes and enough has been printed in “how-to” gun books and past issues of THE AMERICAN RIFLEMAN so I won’t regurgitate any of that stuff here. Just a couple remarks on staining that aren’t adequately addressed in those sources: 1. For work on antiques, especially matching new wood to old, the Birchwood Casey gunstock stains are woefully inadequate. Far better to use good quality, professionalgrade leather dyes, not available in general retail, but through specialist dealers like Tandy or Jantz Supply. The ability to mix colors to get the proper shade for a “spot” touchup is something that comes from experience, there are no recipes. Like playing a concert at Carnegie Hall, it takes lots of practice. A blend that looks great on white paper may not look the same on the wood itself because of the varying density and fibrous structure of the materials. 2. To get light colored new wood to match grungy dark old wood, it helps to first stain the new using a blend of diluted black and some browns to darken it as close to the old as possible. Then go over the whole surface with a lighter brown “wash” to even things up. In case of this Dreyse, the foreward part of the stock was fairly dark brown (the wood is a rather cheap grade of walnut) with some almost- black blotches so I made sure that the repaired area was similarly dark. Figs. 5 and 6 show the finished job. 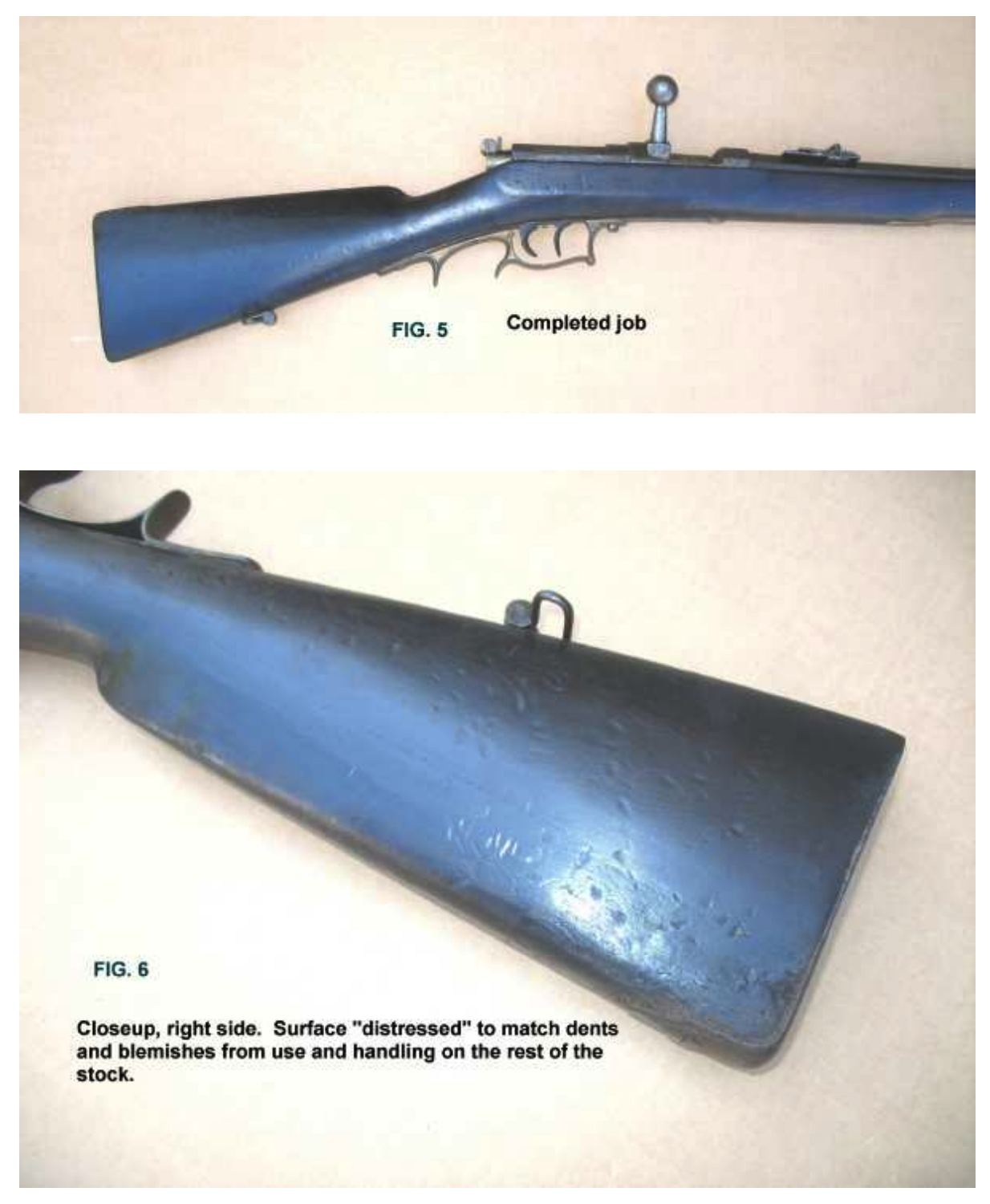