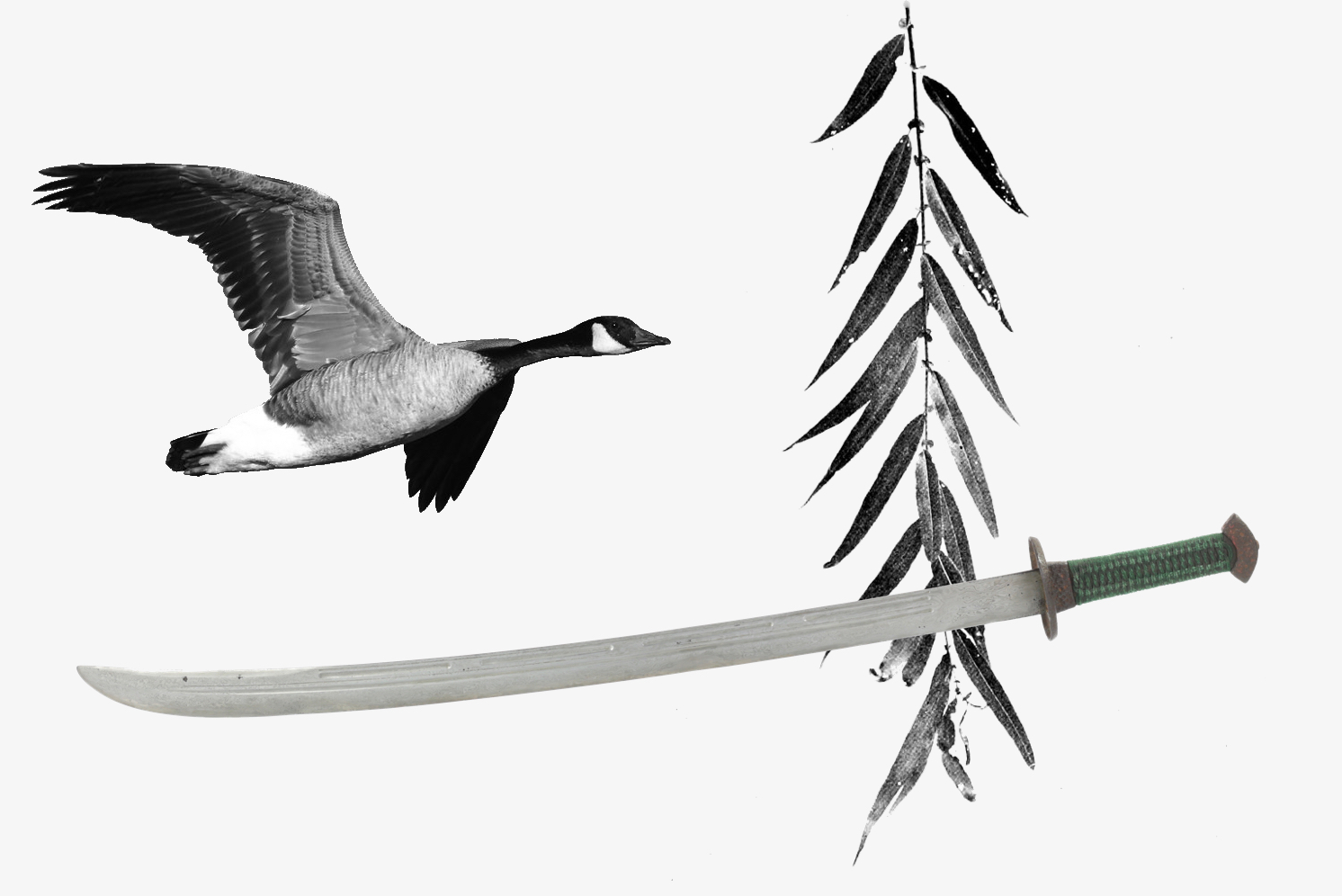 Of geese and willows

The differences between 雁毛刀 yanmaodao (goose-quill saber) and 柳葉刀 liuyedao ("willow-leaf saber") in blade shape can be, to the novice, quite subtle and hard to discern at first blush. However, by picking up the weapon, hilt pointed away from you, the curvature can be checked by sighting down the cutting edge. Or, if looking at a photo taken at 90 degrees to the surface, you can check curve by holding a ruler or other straightedge against the edge of the blade in the image. 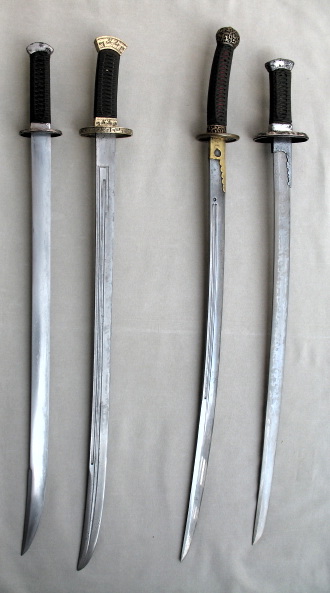 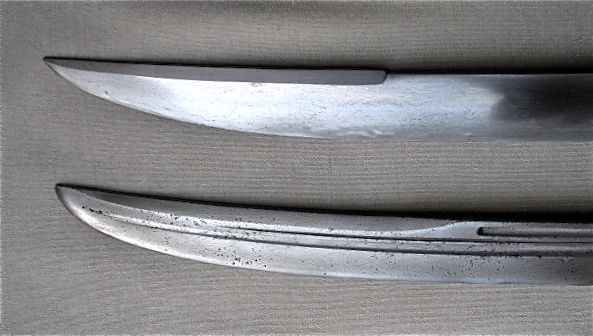 Close-up of the tip sections of the two yanmaodao.

YANMAODAO
In the evolution of the peidao (佩刀) or "waist-worn saber", the yanmaodao appears to be the next step up from the zhibeidao (直背刀) or "straight-back knife" used by China's military from the Warring States period until well into the Song Dynasty, and even by the Mongols on occasion. The zhibeidao, as its name implies, is dead straight, and sharp on one side only. The yanmaodao exhibits the beginning of actual curve in the blade. Earliest surviving specimens date from the Ming Dynasty, and it remained in fairly wide use until the end of the 18th cent. Later examples are rare. Technique utilizes the strong points of both jian (劍) and dao (刀).

Blade characteristics:
1. Profile: Straight for most of length, the cutting edge has a curve only along the last 1/4 or so approaching the tip. The back or spine of the blade sweeps up slightly to form the point.

2. Backedge: There is USUALLY though not always a bevelled area, forming a subsidiary edge, on the spine running about 1/4 way back from the tip. This backedge (sometimes called "false" edge) varies from blunt to fairly sharp, though in no way as keen as the cutting edge itself.

The close up photo of blade tips compares several elements that can be found on backedges. They can be bevelled all the way to the tip, or else "blind", i.e. ending short of the tip itself. The outline or contour of the backedge may be flush with the spine of the blade, or it may project in an offest fashion. Bevels that go all the way to the tip add an additional degree of acuity to the point, making it "sharper" on the thrust. Blind bevels seem to function mainly to adjust the balance, making the tip a little more "lively" without the structural problems of running a groove or fuller out to a fairly thin portion of the blade.

3. Surface features: Yanmaodao blades can have a plain wedge-section (without channels or grooves), see the left-most specimen in the overall photo. They can also be cut with one or more grooves, which serve to lighten the blade while maintaining a certain level of rigidity.

LIUYEDAO
Developmentally, the willow leaf saber takes the goose quill concept further in terms of curve--the arc is now distributed along more of the blade length. The deeper the curve of a blade, the more effective it is for cutting, although accuracy on thrust decreases because the point is even further off the hilt/blade axis (with a jian, of course, the tip is in-line with the axis). The liuyedao's curve is moderate, so it is a happy marriage between the two extremes, offering slightly more cutting efficiency than the yanmaodao yet still usable for thrusting. The willow leaf shape is not "native" to China, it appears to have been introduced in the wake of the Mongol conquests, based on Central Asian prototypes. The liuyedao was THE most popular saber type in China; it replaced the jian and zhibeidao in the military by the Ming, and eclipsed the yanmaodao in popularity by mid-Qing.

Blade characteristics:
1. Profile: Curve extends for most of its length. The curvature is variable depending on the requirements of the user. On some blades, the curve starts out almost negligible and increases in depth towards the point. On others, maximum curve is closer to the hilt, and the arc decreases towards tip. Others are more symmetrical, approaching a [very shallow] circular arc.
2. Backedge: Most blades have them, but some do not. For those that do, the comments under YANMAODAO are applicable.
3. Surface features: See remarks under YANMAODAO above. There is one style of liuyedao (see specimen at bottom of picture) whose blade has prominent ridges 起 qi on both sides, similar to the shinogizukuri cross-section which is typical of Japanese katana. This is in fact a survival of the typical cross-section of most zhibeidao from the Zhou through Tang Dynasties.

A word about hilts
Yanmaodao almost invariably have straight grips. Those on liuyedao can be straight or curved. The former were almost universal until the mid to late 18th cent. Although downward-curved handles are depicted in Ming artwork, they appear to be in the minority until the end of the 18th cent. During the last century of Qing rule, curved grips became far more prevalent than straight.

When you think you see an exception to the rule:
Occasionally, a blade looks "goosey" but the curve in the edge may start a bit further back than the 1/4-of-length rule of thumb dictates. Sometimes, a yanmaodao that has seen extensive sharpening from the center of percussion towards the tip will give this appearance, because more metal has been removed in the area. On other occasions, it may well be an exception. After all, many sabers were made to order, and the odd in-between shapes do appear once in awhile.