The Cham civilization was founded by traders and pirates who originally came from South India. They established a maritime empire in the south and central parts of present-day Vietnam from around the 5th century AD. At their height, they controlled the trade of spices and silk between India, China, the Indonesian archipelago and the middle east.

The height of Campa rule was ended in 1471 after suffering a serious defeat in the Champa-Vietnamese war. Many Chams started to flee to Cambodia around this time, where the culture still persists until this day. Champa was ultimately annexed by Vietnam in 1832. Many ruins of their Indian-style architecture can still be found in Vietnam today such as the Mỹ Sơn complex, a group of Hindu temples devoted to Shiva that was built between the 4th and the 14th century AD.

An ancient excavated sword, probably of the 15th-17th century. The long sword has a cylindrical bronze handle with twelve rings that help provide grip. It is straight for the most part, taking a sudden bend downwards at the end. It has a slight swelling right behind the guard that is seen on later dha and in a more extreme form on large Vietnamese two-handed sabers. The blade is heavily pitted by its centuries of burial but the rust is all stabilized now into a nice deep dark brown patina. Despite the losses the blade is relatively thick, retaining its original stiff temper and retaining a good weight and balance.

It is interesting to note that the sword already has a seppa, the oval washer that is between the guard and the blade, a feature that was copied from Japanese swords. Such washers became standard on later Vietnamese sabers, presumably because of the influence of Japanese settlers in the country. This is the earliest non-Japanese sword I've seen to date with this feature. The guard is cut with four drop-shaped openings, possibly also based on Japanese examples where the drop-shape symbols are called tomoe. A circle with three tomoe was the crest of mon of the Ryukyu Kingdom that was founded in 1429 but which had only three tomoe.

When compared to a Vietnamese officer's saber, probably early 19th century, we can see a remarkable level of continuity in style, from blade curvature to handle shape, up to the little details like the style of guard: 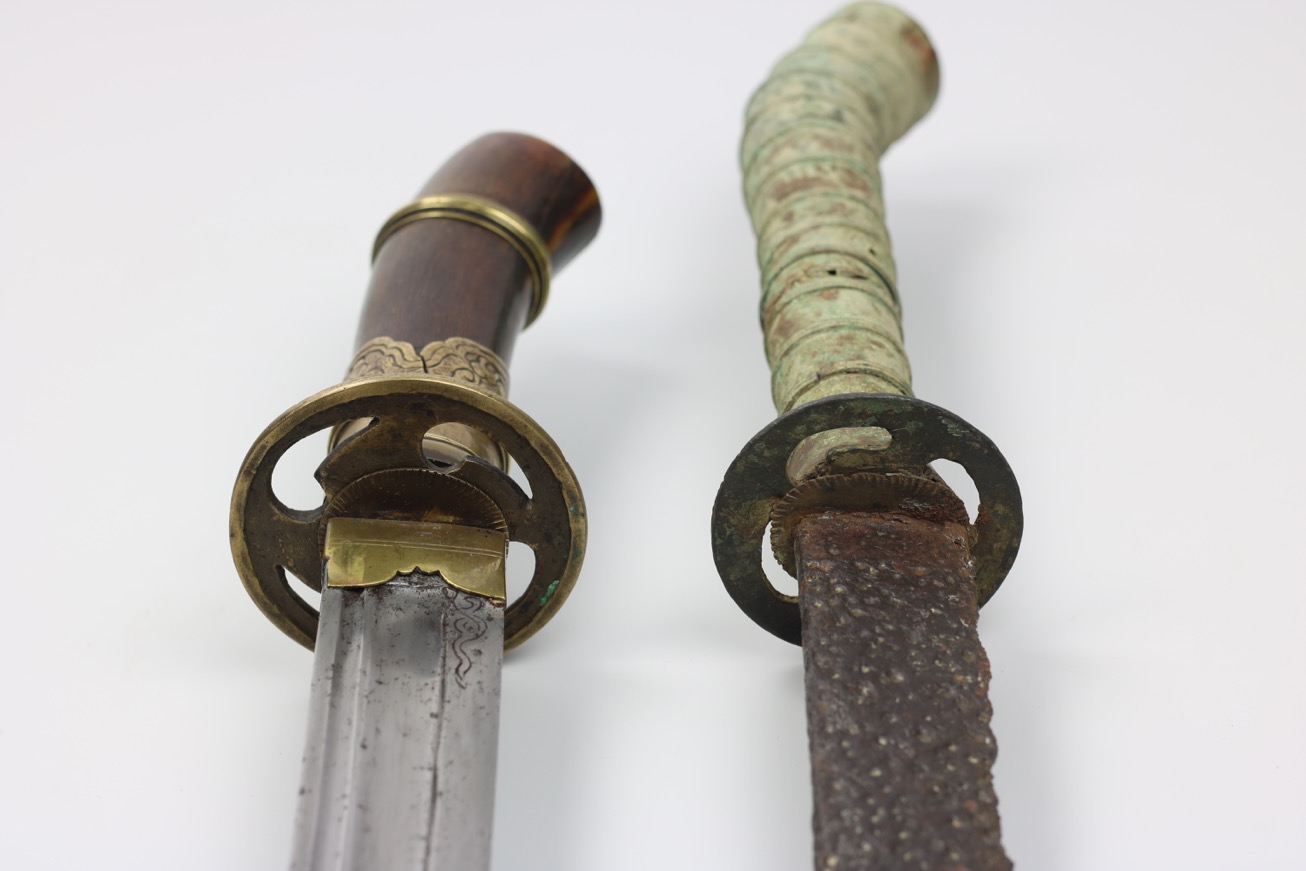 The steel surface has been stabilized. All bronze is in uncleaned, untouched condition, retaining its "as found" patina. Blade is deeply pitted excavated but stable condition. It retains its original, stiff temper.

A very early Vietnamese sword that already shows the strong Japanese influence we already knew existed based on somewhat later examples. It is a predecessor of a style of Vietnamese sabers that remained popular to late as the 19th century, displaying a remarkable continuity of certain stylistic elements over many centuries. An excellent study piece for the more academic collector. 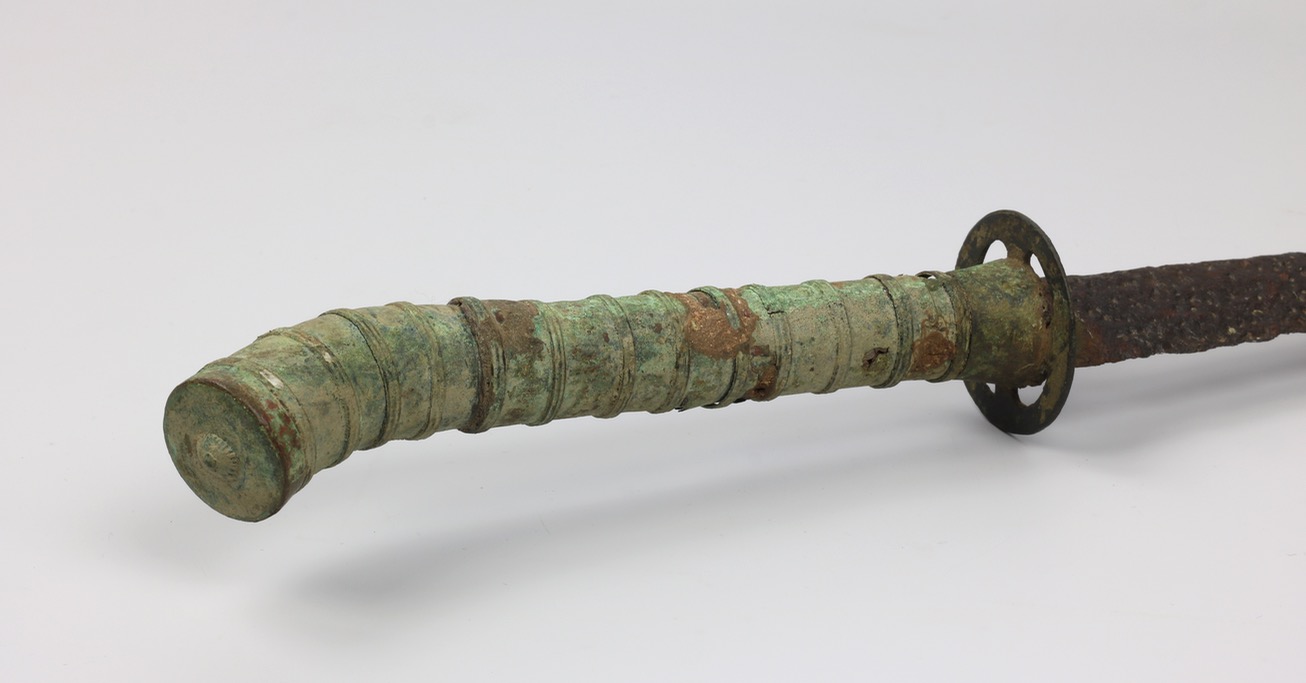 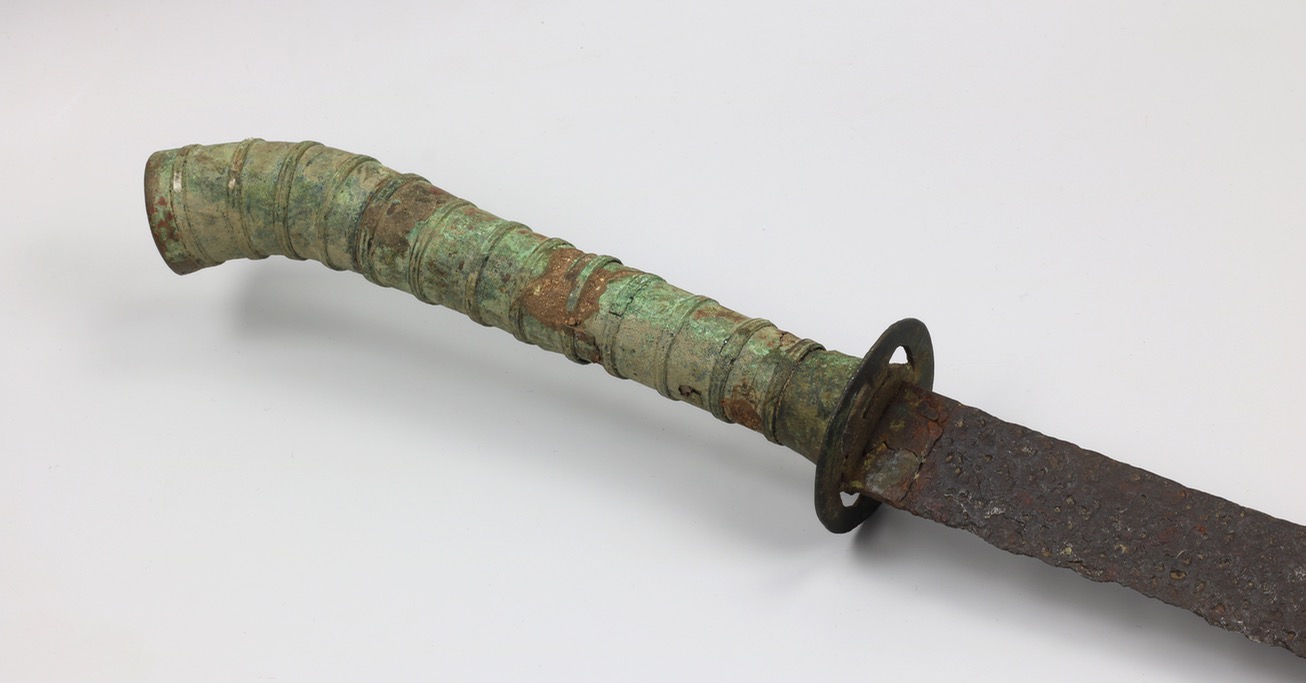 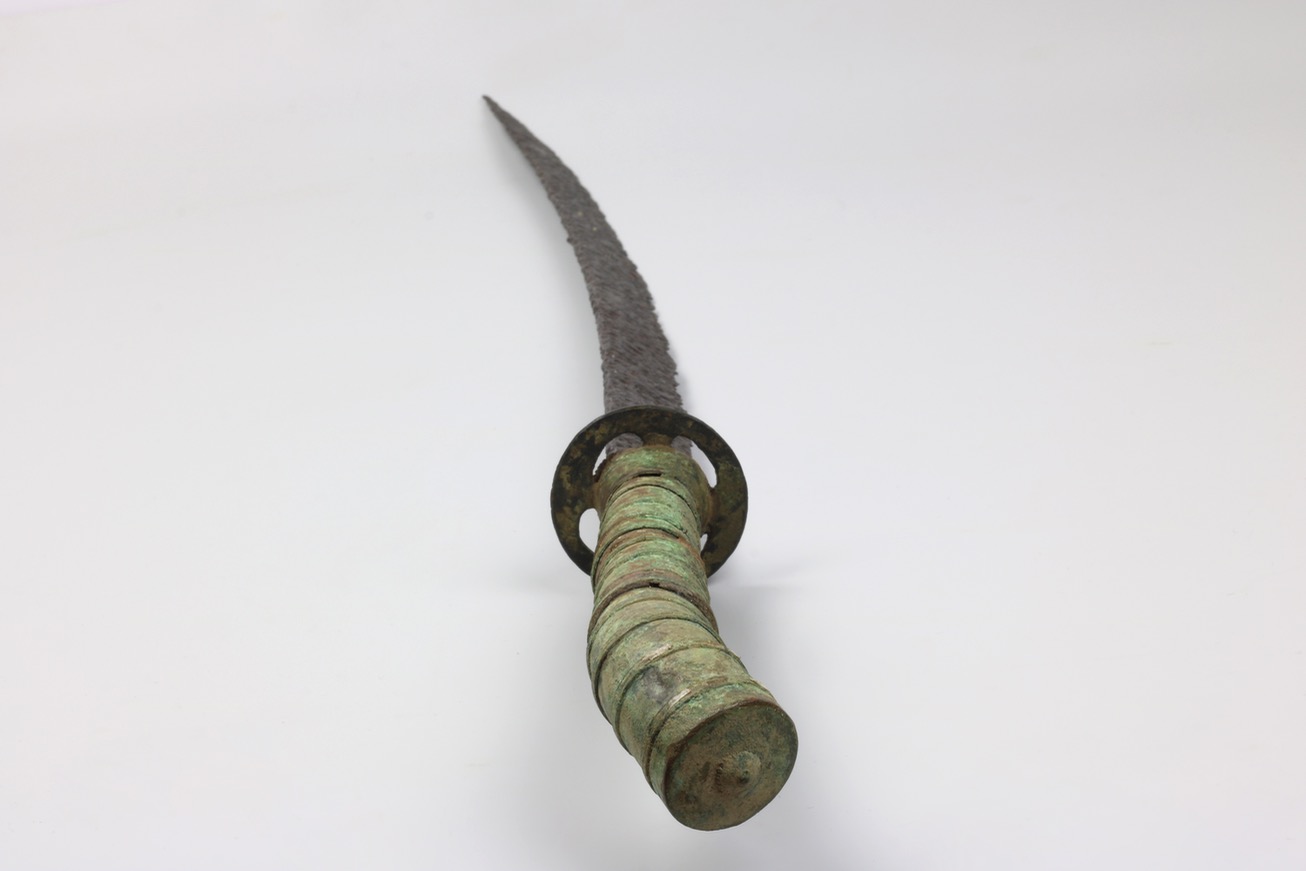 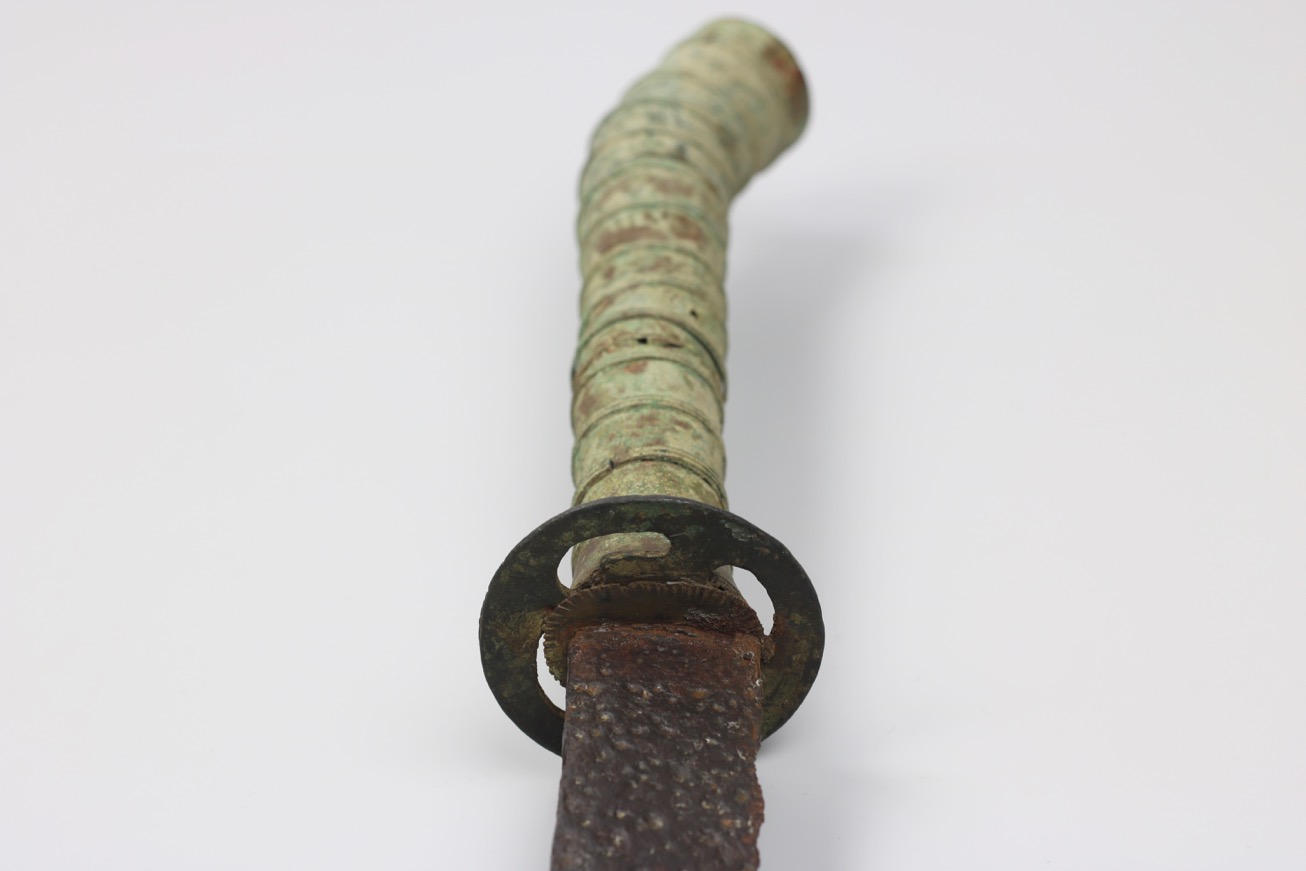 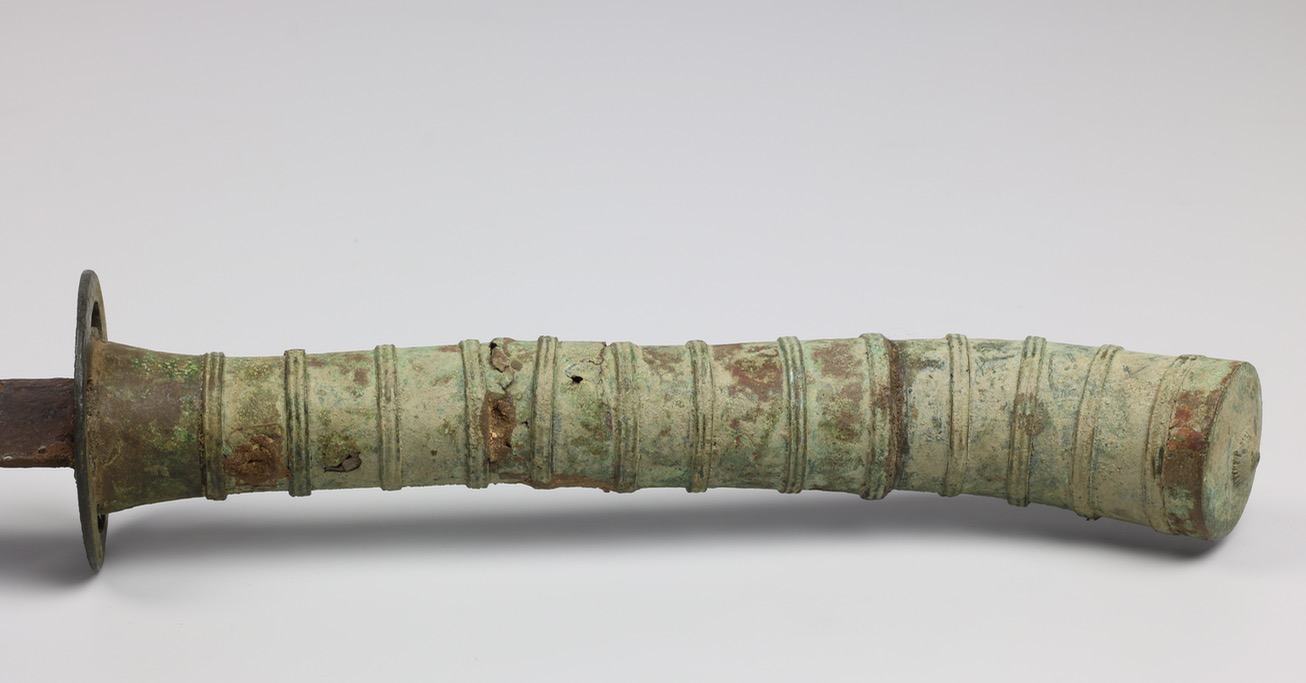 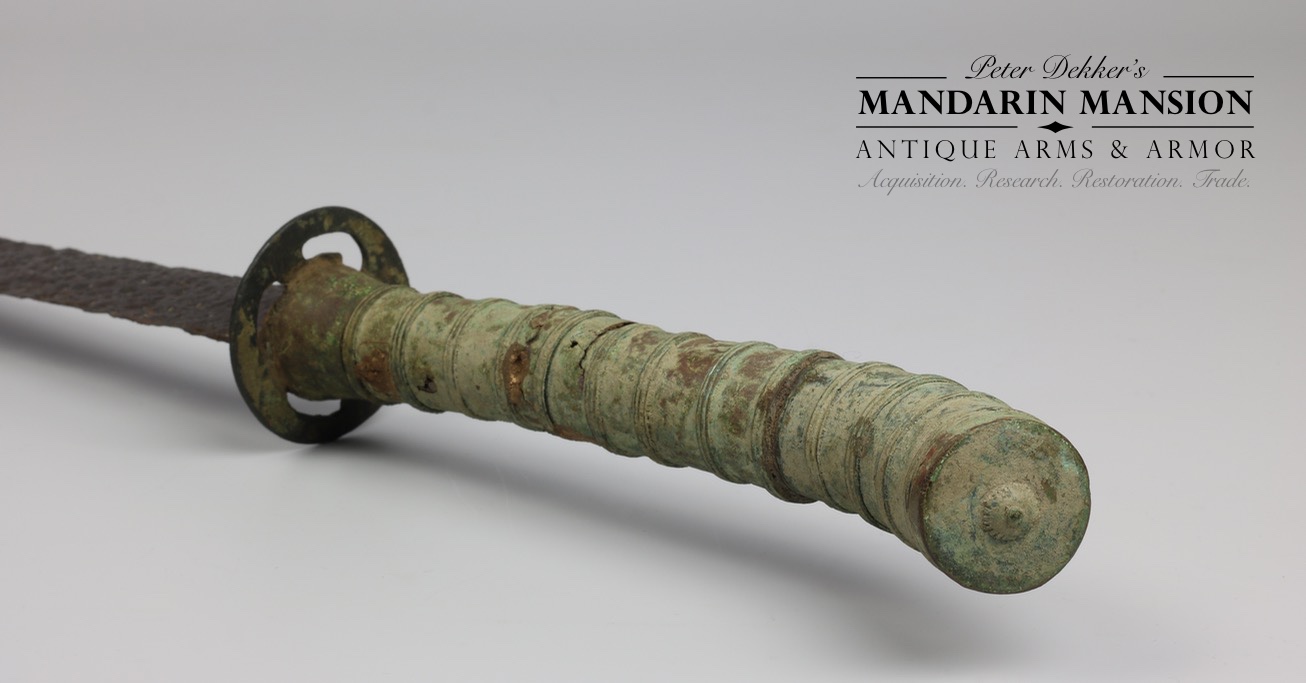